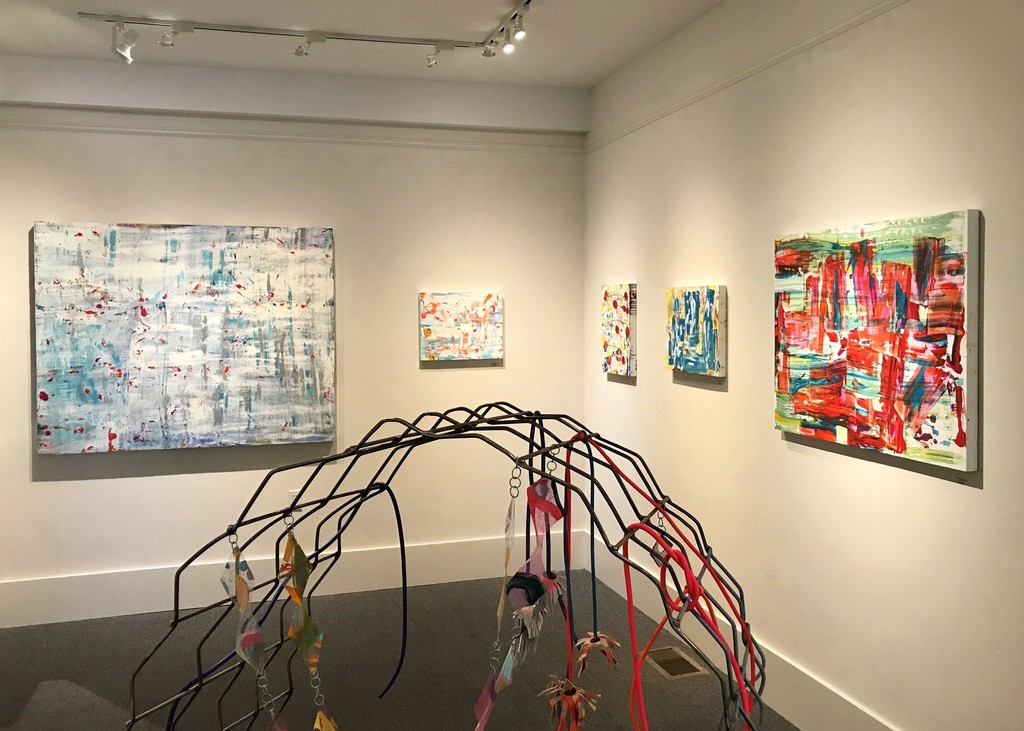 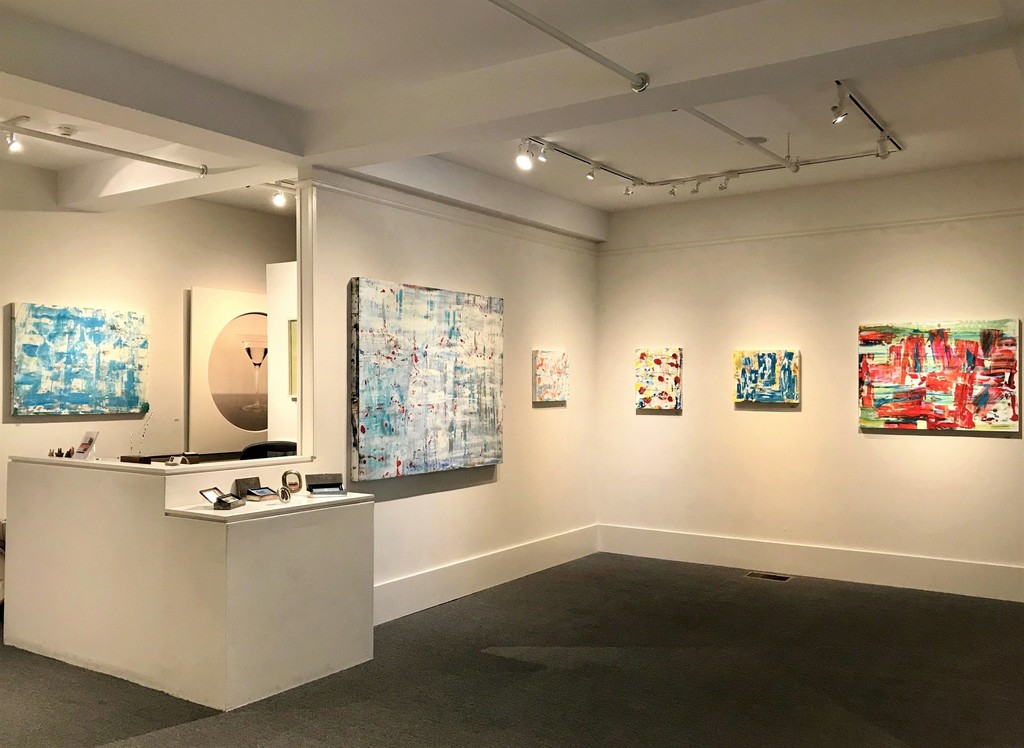 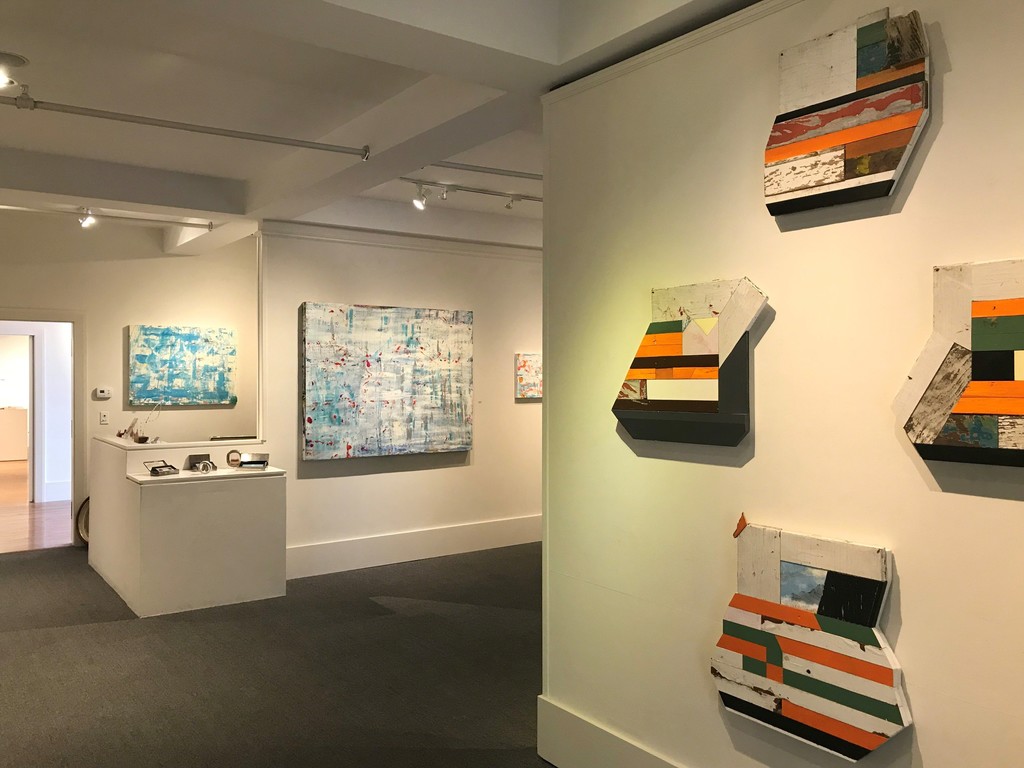 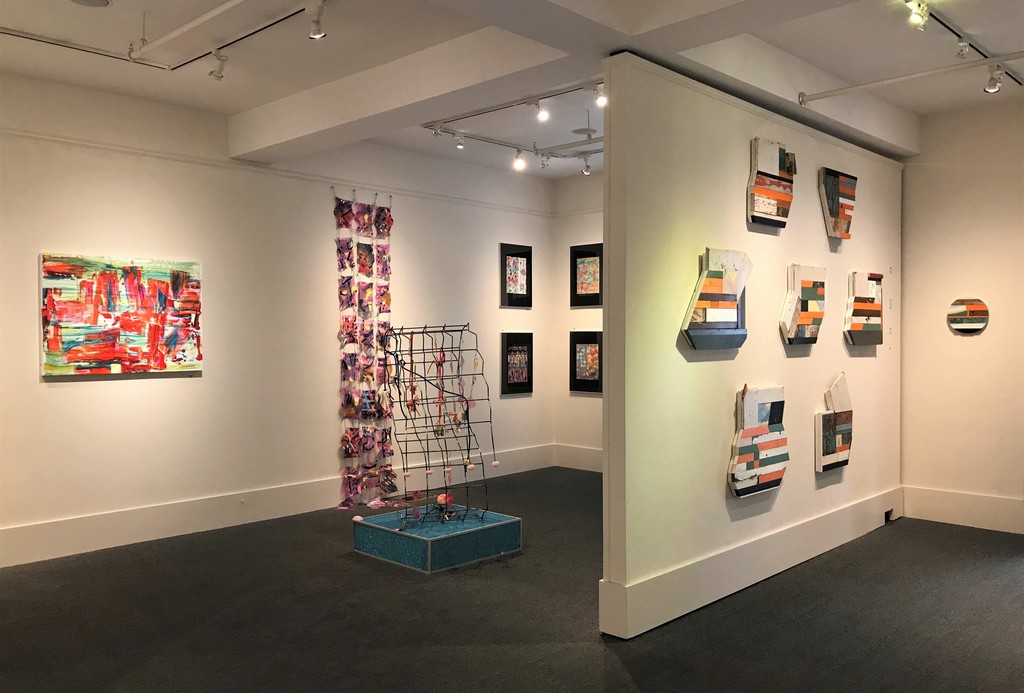 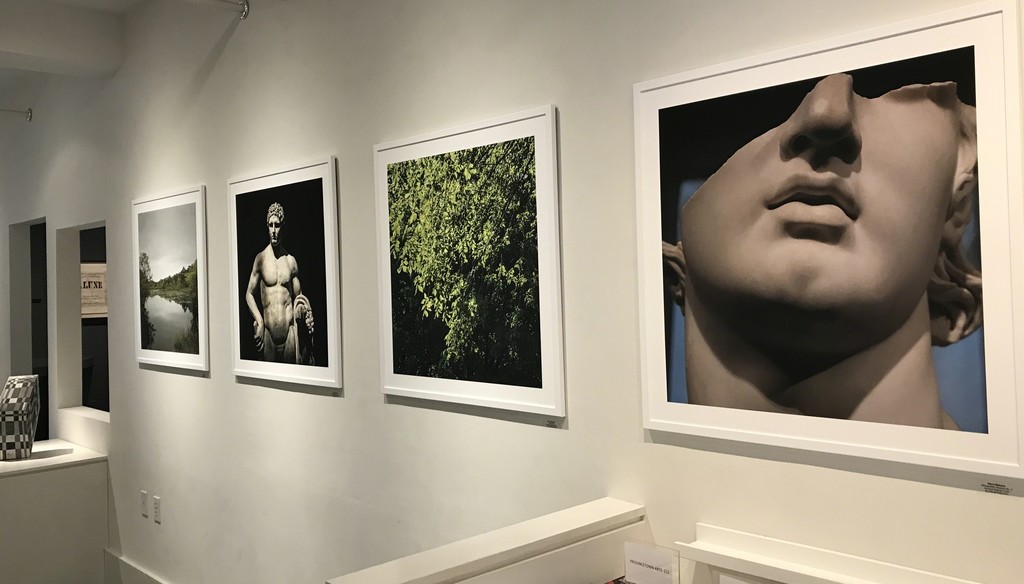 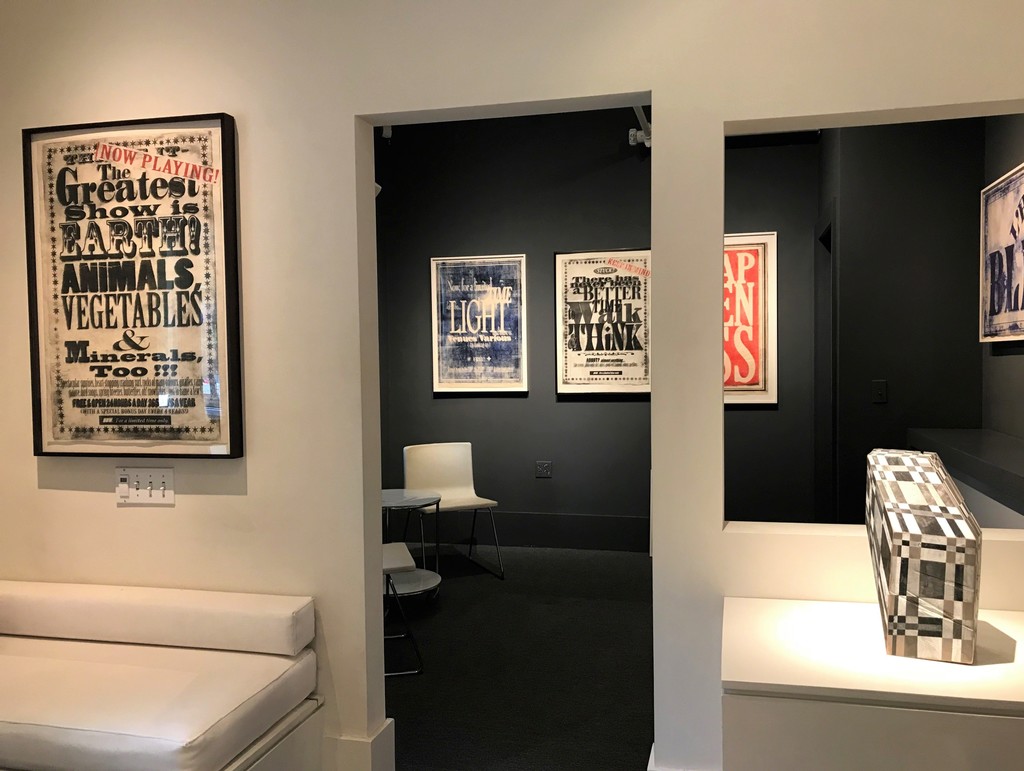 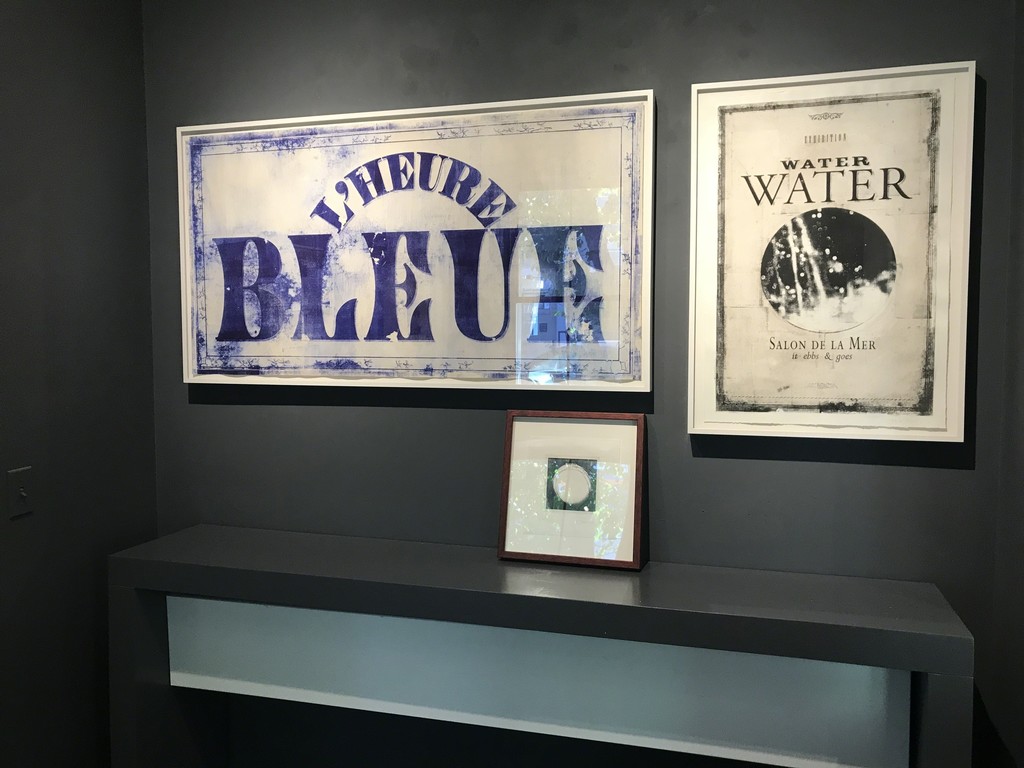 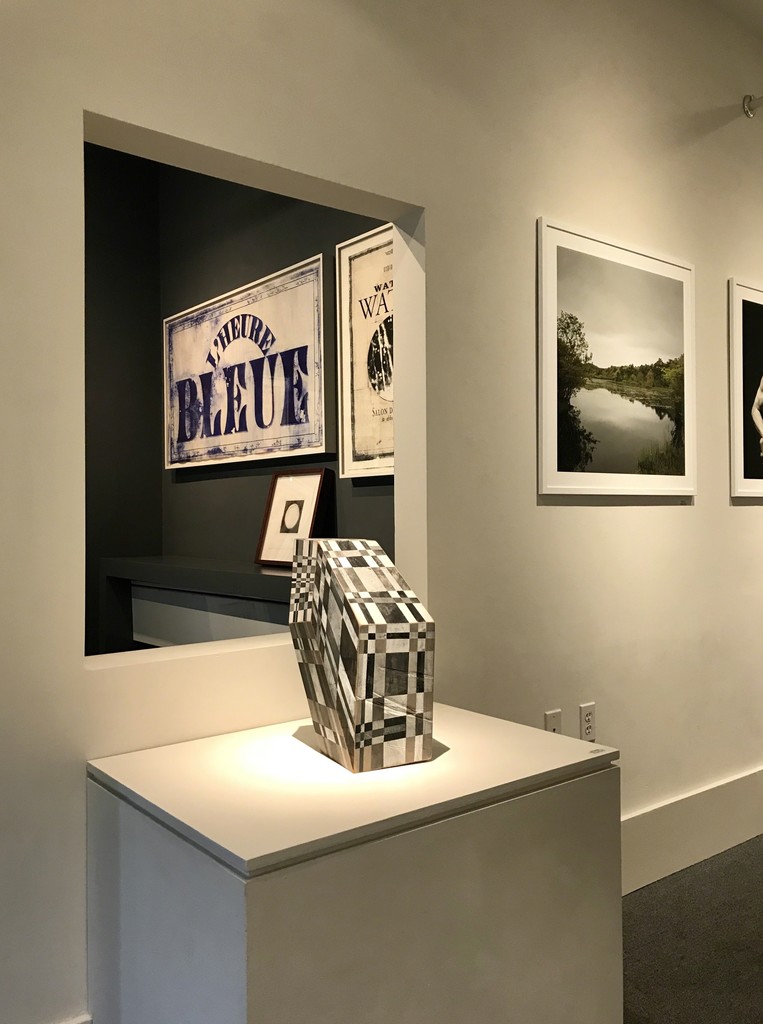 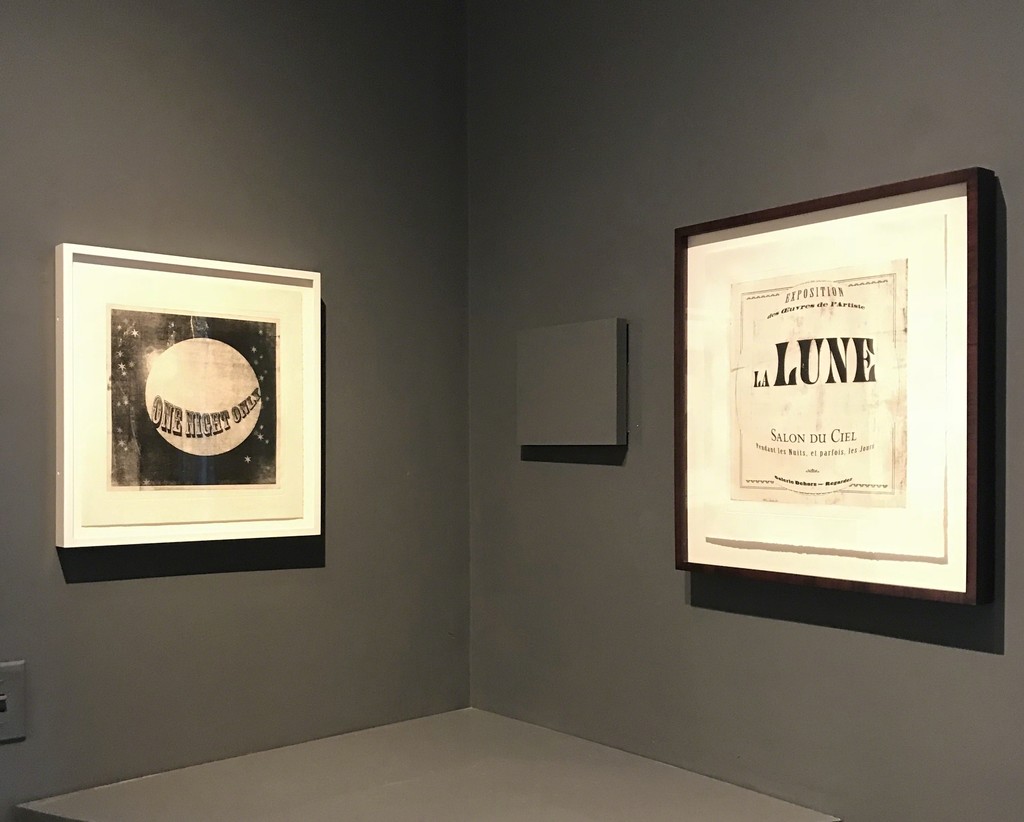 We will present new sculpture from RAMON S ALCOLEA from his series, Provincetown Found, a group of wooden wall sculptures that have been assembled using found and reconsidered wood from around the artist’s Provincetown studio. The wood he uses has been collected over the past 20 years, all stored in his studio—against the wall, in the rafters, under the floor. He eschews a frame, allowing the material to dictate the ebb and flow of the work, as his artistry lies in where the piece begins and ends. In this series, Alcolea looks how the pieces relate to each other to bring about order and balance. His work is about form and mass. Color, shape and organization also play dominant roles.

The gallery is thrilled to introduce ANNE BERESFORD to our roster of exhibiting artists. Though she’s made her artistic mark primarily as a printmaker, Anne Beresford draws inspiration from writers and text. “In paintings and prints with words, there is a conflict between reading and seeing,” she says. “The heart of my work lies in this space of conflict, between the poetic and the political.”

Beresford’s work usually begins with an idea that materializes at the intersection of language and image, at a place where the meanings of both exist symbiotically. It is in this space – where the poetic meets the political & the literal becomes visual – that the idea of each work is born. Several recent series are created as monoprinted lithographs, using paper rather than stone as the printing plate. The fragility and imperfections inherent in the process of paper-plate lithography make it conceptual consonant with the themes of poignance, history and transience in her work.

For this exhibition we will present works from Free4All, an ongoing body of work. This series uses the conventions of exhibition posters, broadsides and frontispieces to advertise worldwide events and elements that most enjoy for free. The works in this series are unbridled celebrations of life’s very temporality – connecting the experience of life to the dizzying fun of a carnival or an exhibition, while at the same time seeming to suggest that the viewer slow down and look around at what is eternal.

Anne Beresford holds a BA from Harvard University and an MA from New York University. She has taught printmaking and painting at The Art Institute of Boston, Zea Mays Printmaking in Florence and in the Visual and Environmental Studies Department at Harvard. She was awarded a MacDowell Fellowship in 2015. Her most recent solo exhibition (2015-16) was at the University of Massachusetts, Amherst, Ten Thousand Wonderful Things: A Conversation with the Collections, at the University Museum of Contemporary Art. Beresford’s work is included in a number of public & private collections, including Houghton Rare Book Library, Harvard University, University Museum of Contemporary Art, University of Massachusetts, Amherst, Boston College, Hampshire College Special Collections, Boston Public Library & The New York Public Library.

Also new to our roster is photography from BARRY BALCZUN. Balczun had his first professional assignments while working at Christie’s auction house in New York, creating environment portraits of specialists and artists for publication. An avid shooter from his early 20s onward, he studied at the International Center of Photography in Manhattan. After a period of disorientation between analog and digital technologies, he now places his landscapes and documentary-style images with both designers and private collectors. Barry toggles between New York City, Provincetown, or anywhere an intriguing image might be found. We will present a suite of five recent 30 x 30” photographs.

SIMONE SIEGEL presents a body of new works which effervesce in a unique area between painting and sculpture. All the works contain elements of plastics, hanging grids painted on vinyl, layered drawings on vellum. The material’s innate qualities of transparency- which the artist obscures by layering pattern and texture – elicit interplay between lucidity and dreaming. Simone employs sand painting on top of many layers of acrylic paint and paper collage to interfere with the vellum substrate’s sleek quality. In her hanging works she creates grids of painted vinyl fabric, which are then cut into uniform shapes and attached with hand bent steel rings. Navigating through ideas across several mediums, Simone works with a vibrant palette. Her growing visual lexicon is inspired by building materials and inane objects, military design, global textile traditions, and hypnotic patterns.

Simone Siegel received her BFA from the School of the Art Institute of Chicago in 2015. She lives and works in Brooklyn, New York.

ANDRÉ VAN DER WENDE was born in Balclutha, New Zealand. He received his BFA in Painting and Photography from Canterbury University, Christchurch, New Zealand (1987), and his MFA in Painting and Printmaking from the University of Connecticut, Storrs (1993). He is also a certified Yoga instructor, and an established arts writer/critic having contributed nearly 300 reviews and features for numerous publications over a 15 year period including Art New England, Artscope, The Cape Cod Times, and Provincetown Arts. André has been a resident of the United States since 1988 and lives and works in Massachusetts. For this exhibition he will present new paintings.

We are pleased to offer recent photographs from ADRIAN FERNANDEZ. Fernandez studied visual arts at the San Alejandro Fine Arts Academy (2004) and later at the Superior Institute of Arts (2010) in Havana, Cuba. Early in his art career, despite of specializing in sculpture, he began to practice with photographic media, becoming later his main expressive tool. His work has developed from the use of black and white with documentary perspective, evolving in later years towards studio photography and the use of digital media as well as color photography. He currently works as an independent artist and as a professor on Documentary Photography in Havana for New York University, Tisch School of the Arts, Office of Special Programs Abroad. He has exhibit in several group and solo shows in Cuba, United States, Mexico, France, Belgium and Cambodia.