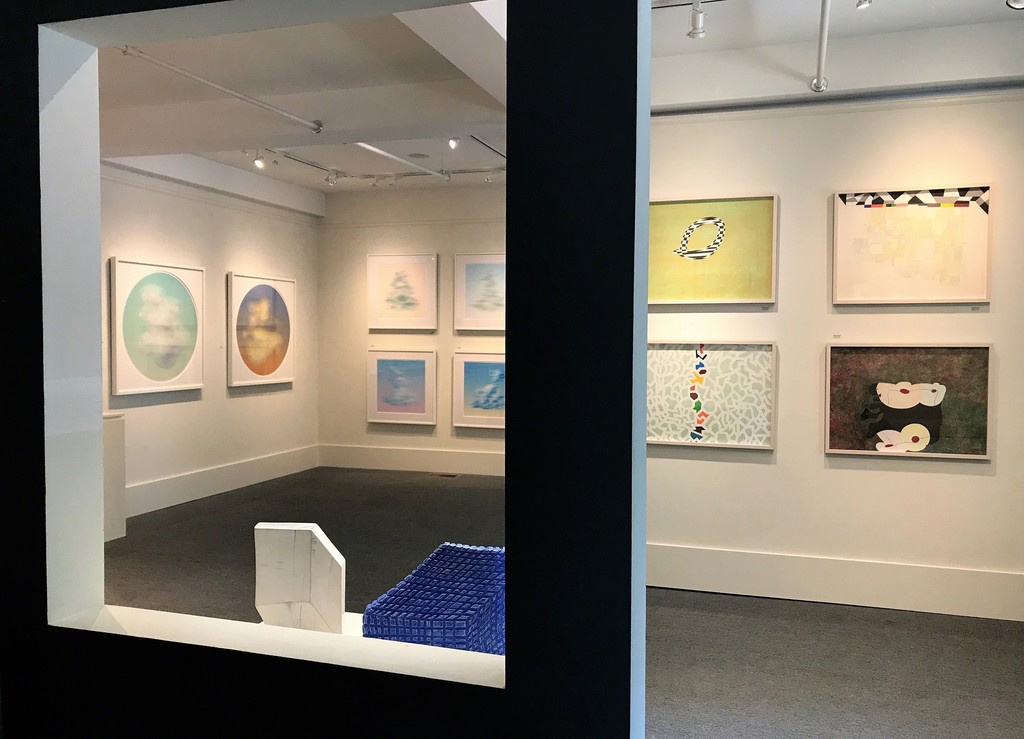 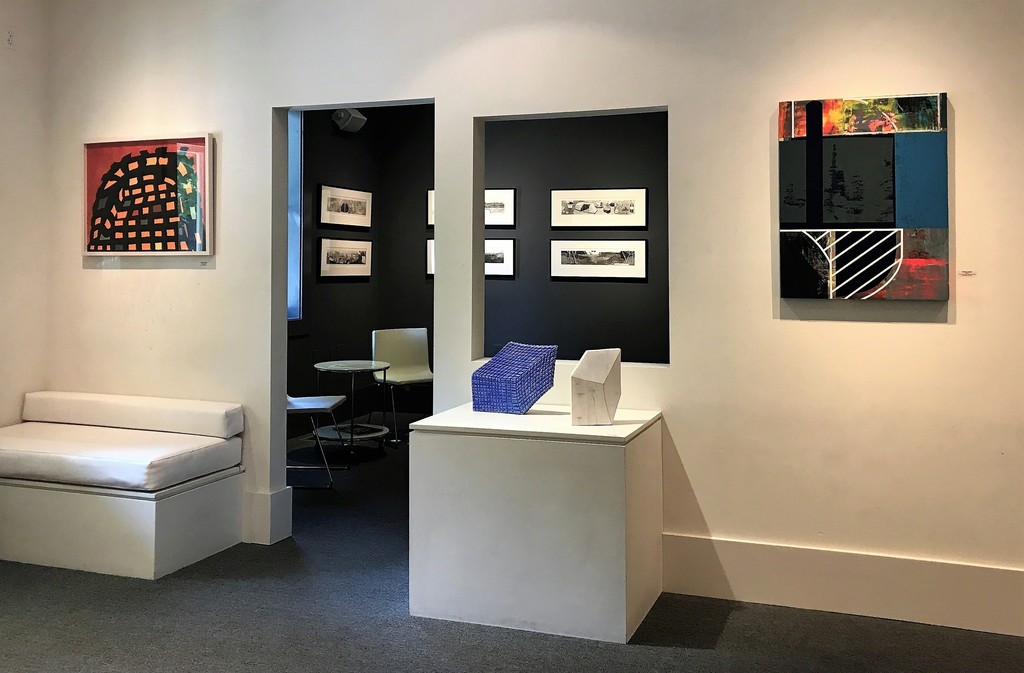 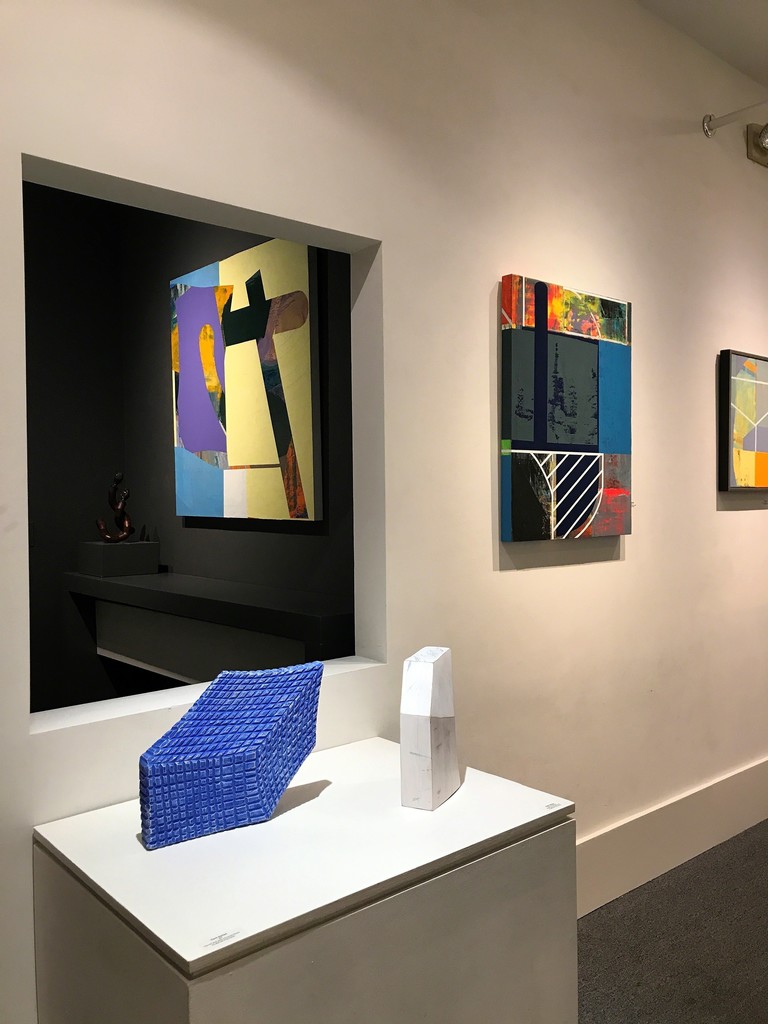 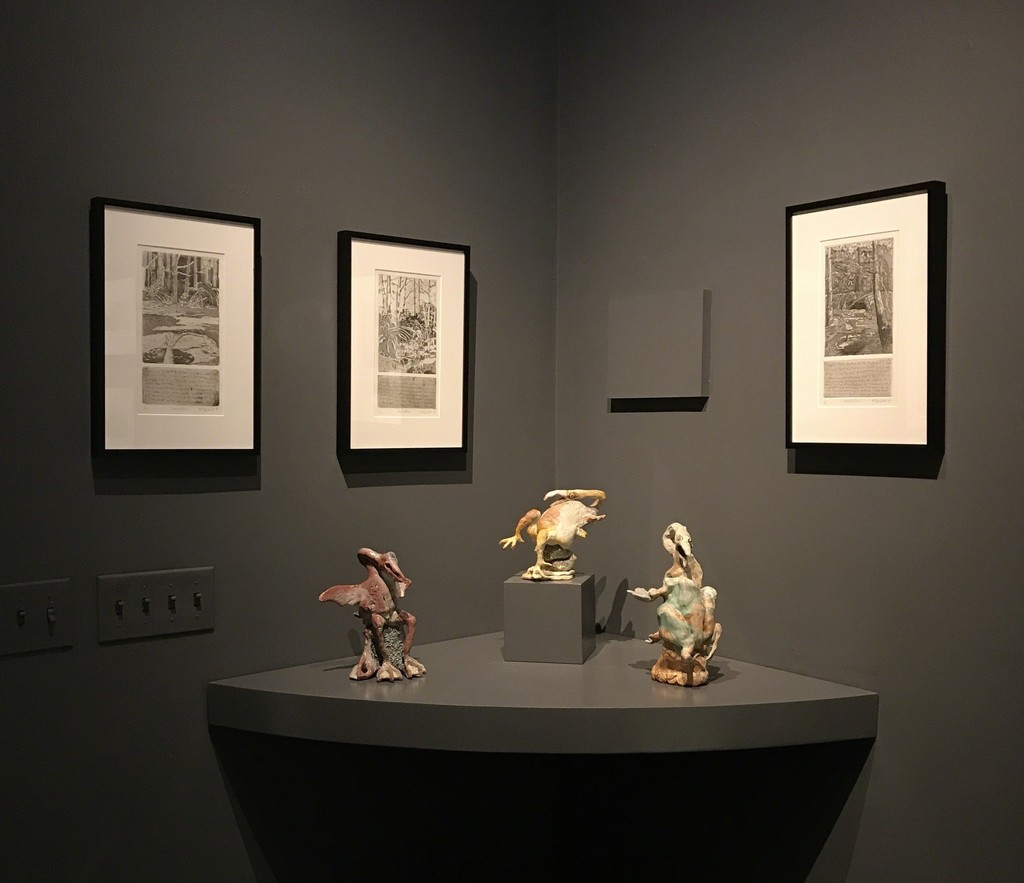 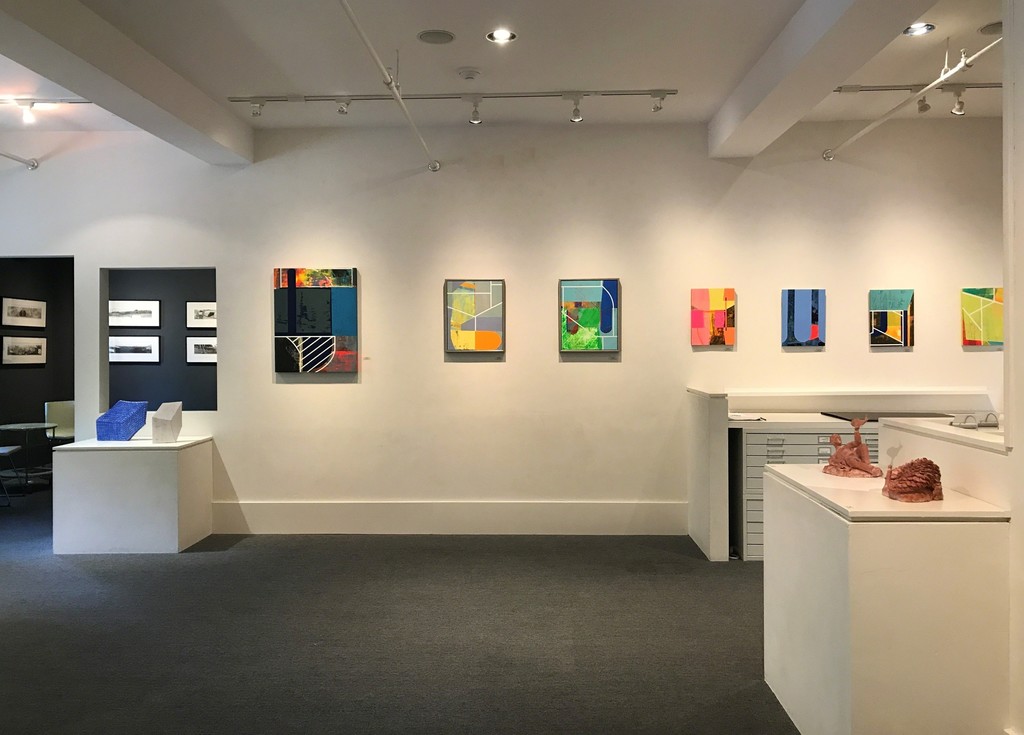 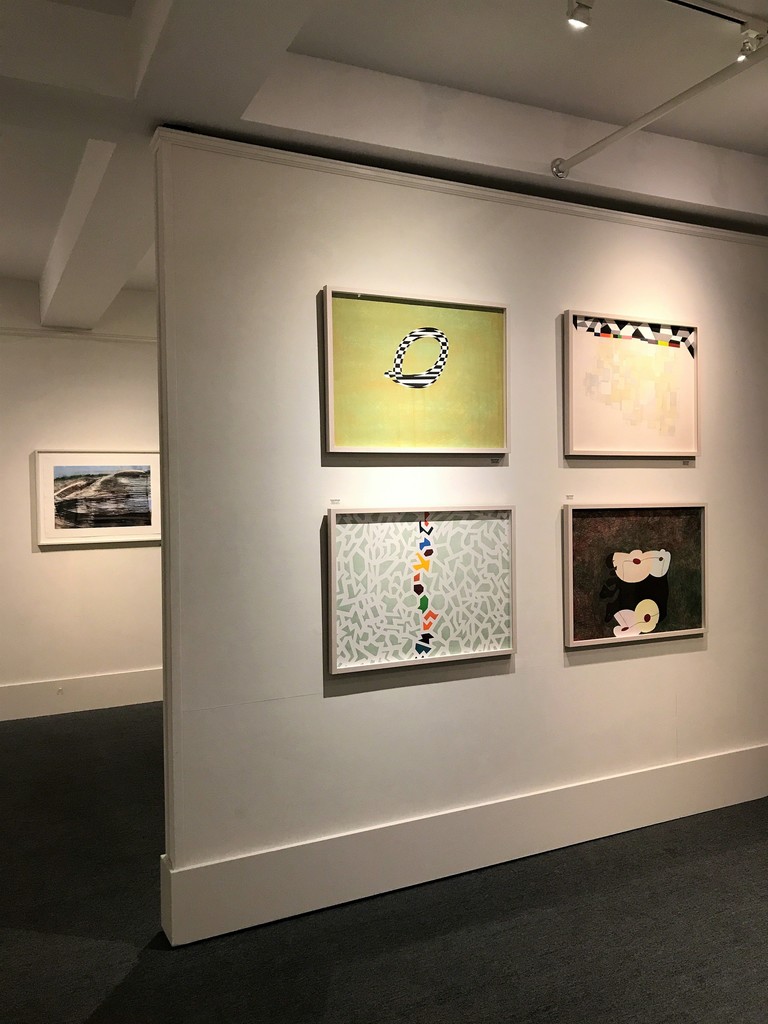 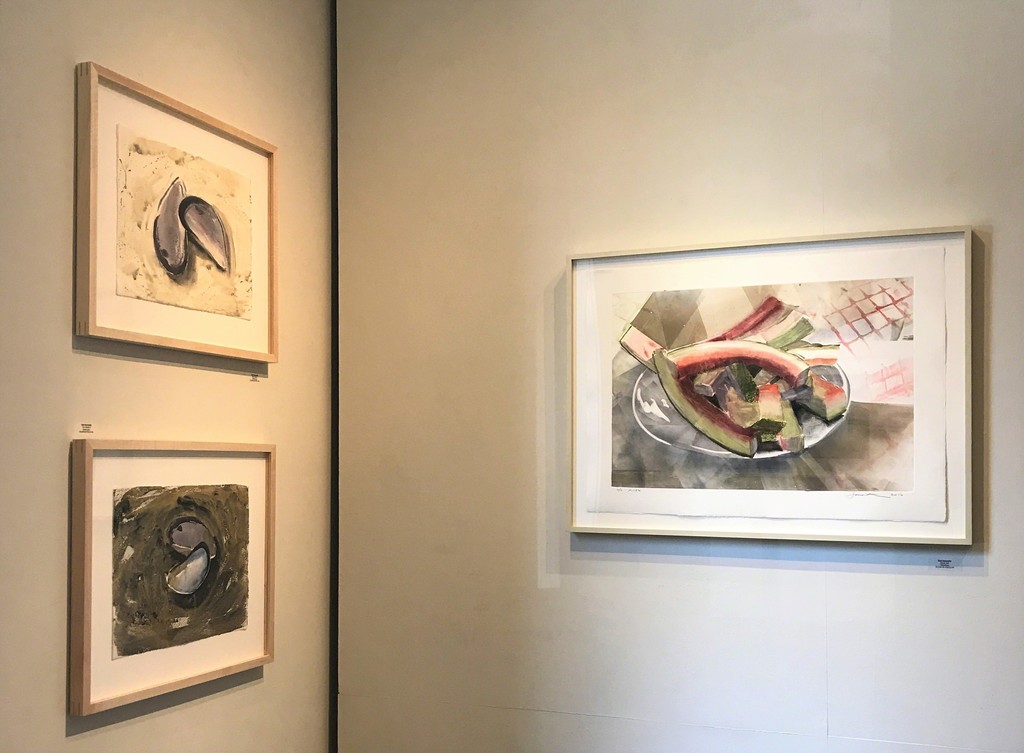 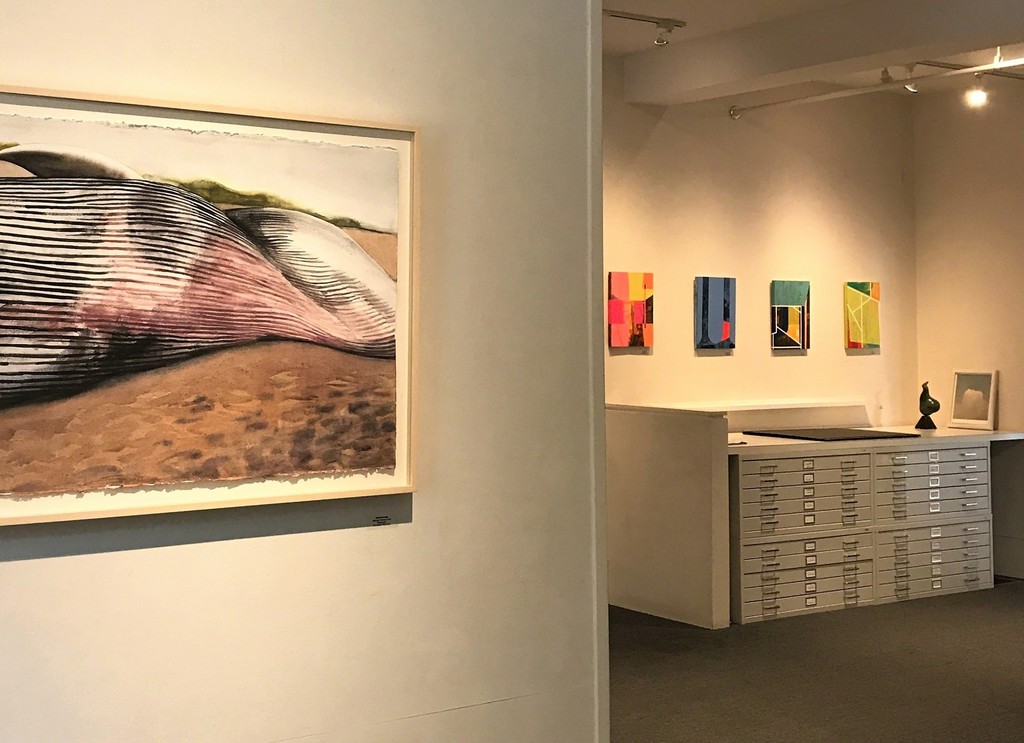 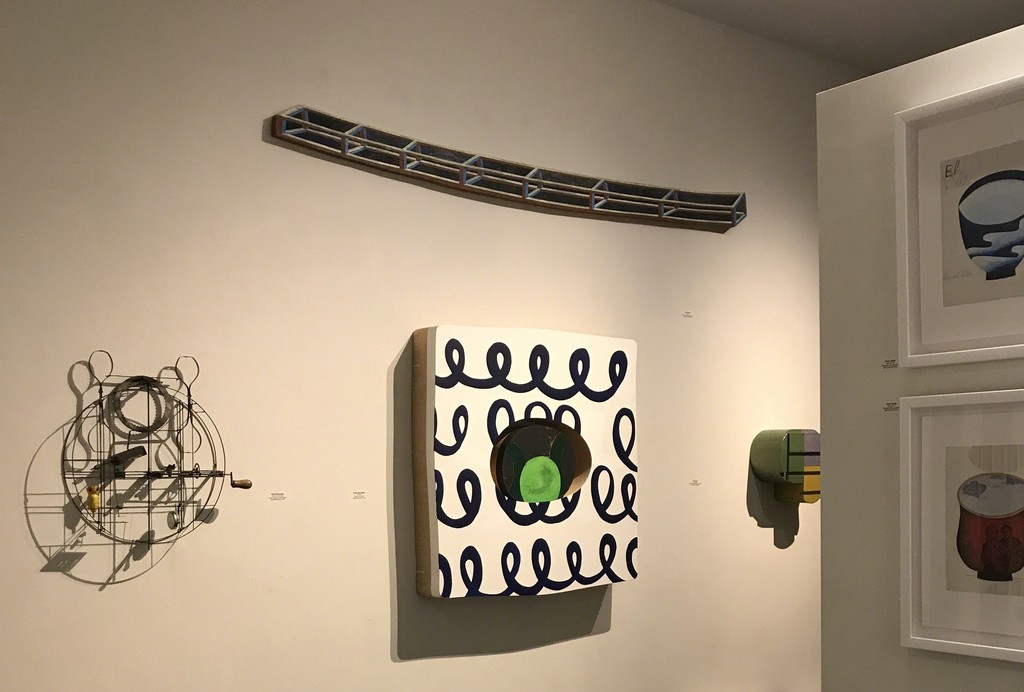 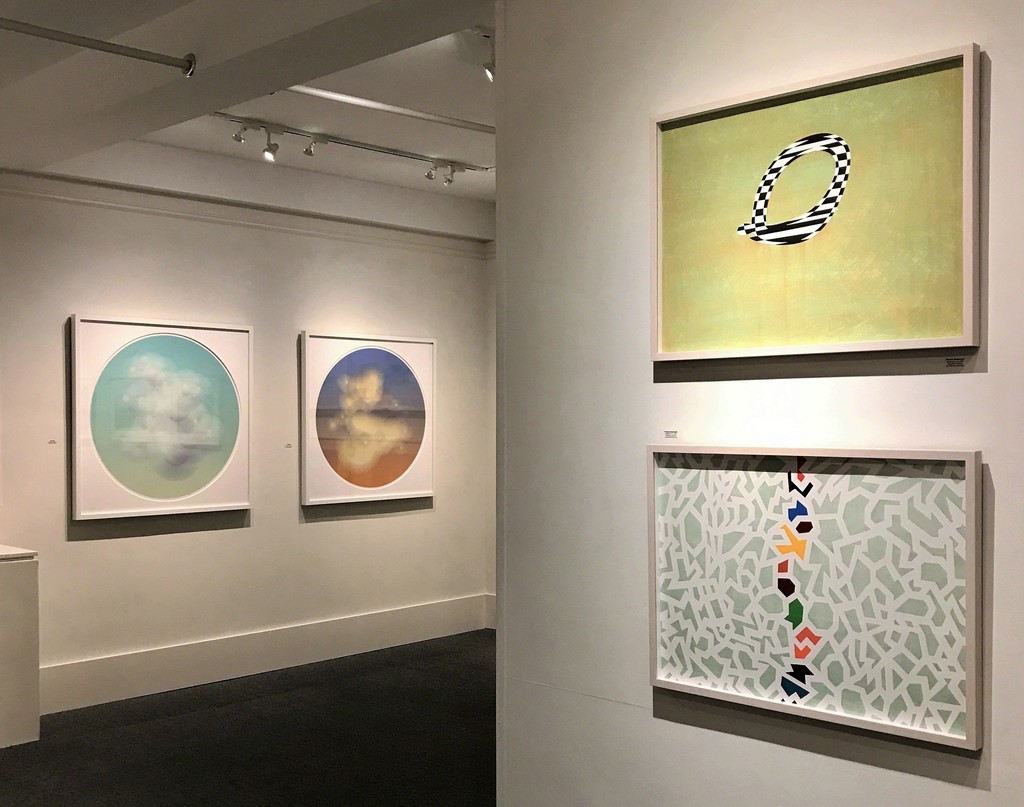 It is our great pleasure to present a selection of aquatint etchings from TOM NOZKOWSKI. In addition to clearing a path of possibilities for a generation of painters Tom has made a practice, reputation and career as an artist who seeks and conveys ‘rightness’ in all the unorthodox, lush, gorgeous, challenging and exciting ways that it can appear. Nozkowski paints how we see and implies our relationship to space, form, color and light subtly and with a skill and poetic understanding evocative of Provincetown’s Myron Stout. This will be Nozkowski’s first exhibition at the gallery in over a decade.

THOMAS NOZKOWSKI (b. 1944, Teaneck, New Jersey) received a B.F.A. from The Cooper Union Art School, New York in 1967. Known for his richly colored and intimately scaled abstract paintings, Nozkowski began exhibiting in group shows in 1973 and made his solo debut in 1979. By 1982, the Museum of Modern Art, New York, had acquired a painting from an early one-person exhibition for their permanent collection. To date, Nozkowski’s paintings have been featured in more than 300 museum and gallery exhibitions worldwide, including over 70 solo shows.

JOEL JANOWITZ will exhibit a suite of new works on paper. Joel Janowitz has had over thirty solo
exhibitions. His work can be found in numerous public collections including the Whitney
Museum of American Art, the Minneapolis Institute of Arts, The Boston Museum of Fine Arts,
the Harvard Museums, and the Yale University Art Gallery.

In 2016 Janowitz received his fourth Artist’s Fellowship in painting from the Massachusetts Cultural Council. In 2013 The John Simon Guggenheim Foundation honored him with a Guggenheim Fellowship. He has twice received artist grants from the National Endowment for the Arts. He has taught at Wellesley College (2003-2010), Massachusetts College of Art/Fine Arts Work Center’s Low-Residency MFA program (2006-2010), and the School of the Museum of Fine Arts, Boston (1994-2000). He received his B.A. in Psychology from Brandeis University in 1967 where he studied painting with Philip Guston and drawing with Michael Mazur. He received an M.F.A. in Painting from the University of California, Santa Barbara in 1969.

We’re also thrilled to present new work from TED KINCAID. Ted will exhibit a new series of cloud
Photographs. In addition we will feature a special limited edition portfolio titled, ‘Not For
Another Hour But For This Hour ‘, consisting of 12 Photographs (ed. 5) @ 19 x 15″.

TED KINCAID is exhibited and collected nationally and has received considerable critical attention for his photographically based work. He has been reviewed in ARTFORUM, ARTPAPER and ART ON PAPER and is included in the permanent collections of the Dallas Museum of Art, the Museum of Fine Arts in Houston, the Museum of Fine Arts in San Antonio, the Neiman Marcus Collection, American Airlines, the Belo Corporation, the Microsoft Corporation, Pfizer, Inc, Reader’s Digest Corporate Collection, the City of Seattle, Washington, the U.S. State Department and the Human Rights Campaign Headquarters in Washington, DC.

His work has been seen in many gallery exhibitions and is in numerous museum and corporate collections, as well as a number of commissions, including designing the cover for Neiman Marcus’ The Book twice, a large 22-foot mosaic for DFW International Airport’s Terminal D, and a two story mammoth cloud canvas that anchors Dallas’ Omni Convention Center Hotel.

Over the course of two decades, Kincaid has systematically subverted the notion of an objective photographic record. As his art continues to explore the play between painting and photography, Kincaid is one of several artists creating a new painting informed by photo-imagery and a new photography influenced by painting. The artist has explored this conceptual discourse through multiple series of work, deftly riding the line between the construction of totally manufactured images that bear the aesthetic of seemingly straightforward photographic images and actual photographs that buzz with vibrant palettes almost too fantastic to be considered plausible.

ANTHONY FALCETTA is a painter who lives and works in Beverly, Massachusetts. He holds a BFA (Graduation with Distinction) from Massachusetts College of Art and Design, and has shown his work in solo and group shows in and around Boston, in Connecticut, and in New York City. His work is included in private collections on the East and West coasts. Recent activities include a month-long residency at Vermont Studio Center in Johnson, VT, and curating a five-person painting exhibition at Brickbottom Gallery in Somerville, Mass.
Falcetta's paintings use a hybrid visual and material language to examine the everyday world and the seams and shapes that hold his surroundings together -- creating containers for distilling experience. He paints to anchor himself in the present, and to make analogs for our shared experience. The works in this exhibition sources forms abstracted from constructed urban/suburban spaces, and the overlays of markings in these spaces that give cues about how to interact in these environments. The paintings contain layers of textural and visual information that create, obstruct and define Falcetta's compositions, which are simultaneously familiar and fresh. We will exhibit new paintings on canvas and board.

MARTY EPP-CARTER was raised in the Midwest, lived in Boston and Provincetown, Massachusetts for over 20 years, and relocated to South Carolina in 2006. She earned a BFA in painting from the Massachusetts College of Art and Design and an MFA in Printmaking from Clemson University. Epp-Carter is also a teacher at the South Carolina Governor’s School for the Arts and Humanities and credits her continuously changing artwork to her ongoing experimentation and collaboration in the classroom.
The work in this exhibition comes from two bodies of copper plate etchings: The Camping Suite and The Backpacking Suite. Both are expressions of an ongoing project that combines the artist’s studio practice and her exploration of the physical world in nature through camping and backpacking. Both bodies of work are etchings that are drawn on-site and then processed and printed at the artist’s studio upon returning home. The horizontal landscapes are from a 2016 trip that took the artist from her South Carolina home west toward the North Rim of the Grand Canyon, camping along the way and back in Alabama, Oklahoma, New Mexico, Arizonia, Texas, and Arkansas. The small, vertical prints with a narrative component are from backpacking trips in and around the Smoky Mountains and Blue Ridge Mountain Foothills. For these prints, the plates are carried in her pack and worked on at the camp site after the artist carefully establishes an intimate experience and viewpoint particular to that very small part of a much larger environment.
The horizontal observations usually express in their imagery the awe one might feel when confronted with a vast, wider-than-our-breath-of-sight vista. In these etchings, Epp-Carter attempts to capture what the eye sees and the heart feels. The smaller, vertical etchings are intimate in a way that invites the viewer to sit in the place of the artist and to read the words that have little to do with the scene, but so much to do with Epp-Carter’s experience of that hike, to that place, with those people. In these prints we sense the connection the artist has to her fellow hikers and we see the detail of the place in all it’s sun-dappled silence.

LEAH DYJAK is an interdisciplinary, lens-based artist splitting her time between New York and Massachusetts. She received her MFA from the University of Texas at Austin. Her site-specific work combines performance, labor, film, and photography to explore how generations of human use affect the ecologies of the place. Her images often push the edges of the photographic frame. Her work plays with perceptions of known and stable matter. She is an Assistant Professor of Photography and Video at Winthrop University.
For this exhibition we will present a selection of photographs from her series New Beach, photographs of the collapsed asphalt in the landscape at Herring Cove Beach of Provincetown’s National Seashore. The work charts matter in flux and our corporal response to the ever changing shoreline and the rising of the sea.