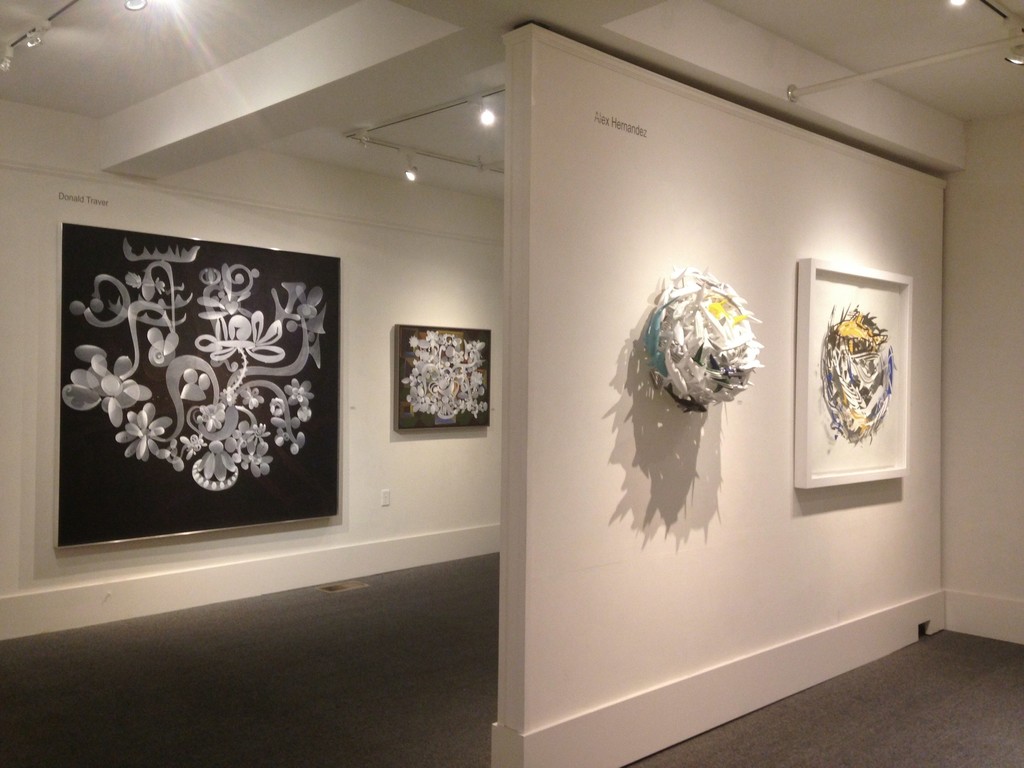 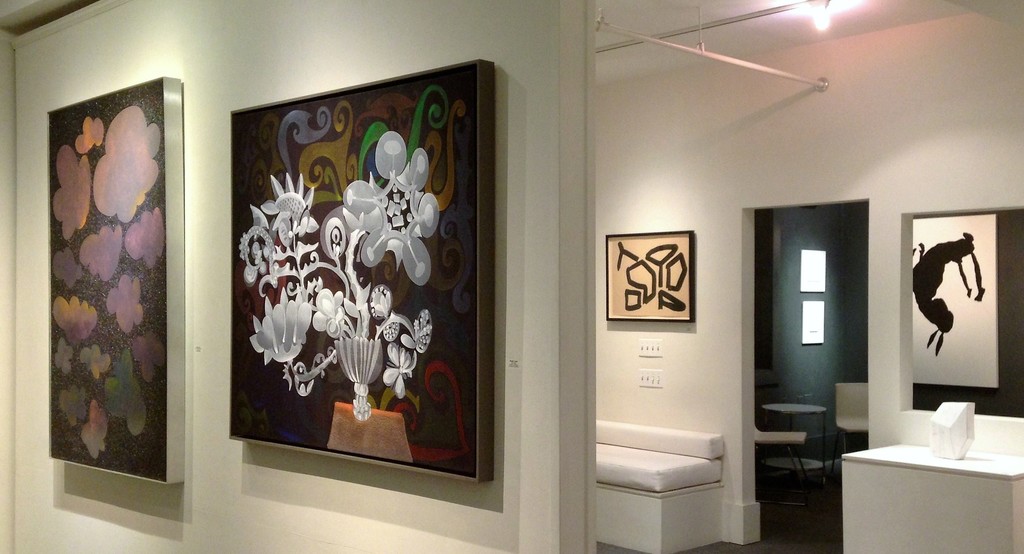 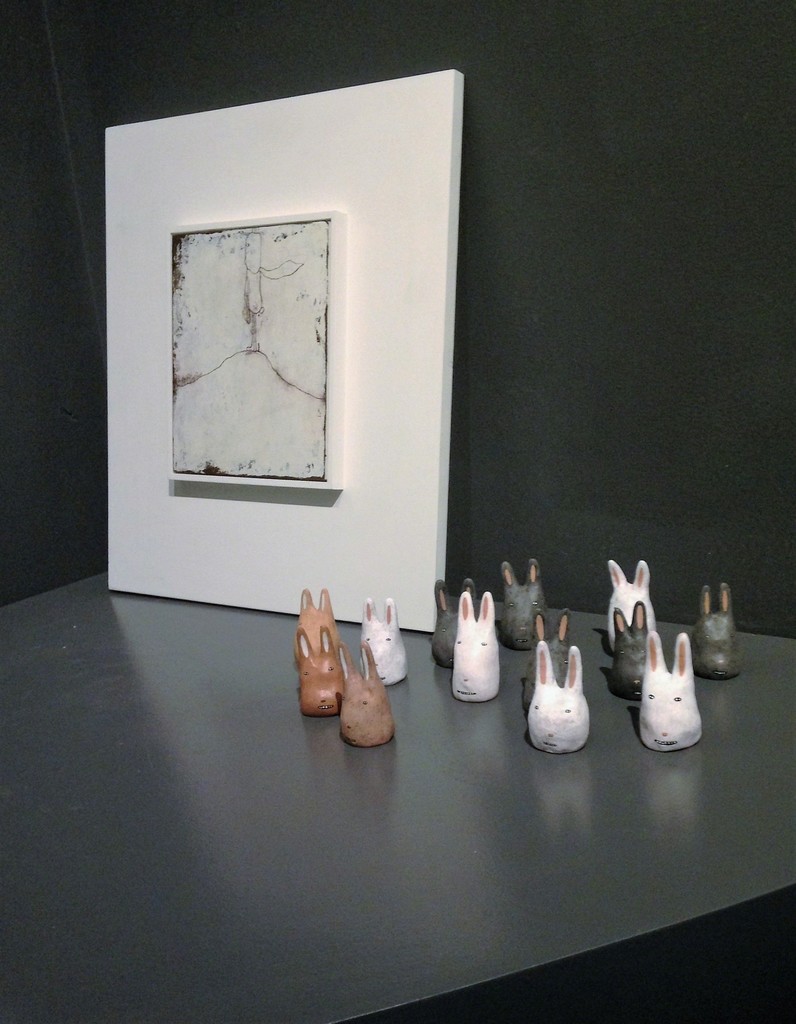 The gallery presents new work from a selection of our gallery artists that are well known internationally as well as in Provincetown and on the Outer Cape. The exhibition includes an outstanding selection of photography, painting, drawing and sculpture. The common thread for this joint display of recent work are new executions of material responses to formal guidelines that defy categorization with new ideas about identity, culture, and history.
The gallery presents an installation of new work by REBECCA DOUGHTY, showing the scope of her recent work, including large-scale oil paintings, and a new group of small narrative drawings.

Doughty’s animal characters navigate a tragicomic world of human predicaments. Her drawings and paintings have been exhibited widely, including The Drawing Center in New York, The Boston Drawing Project, DeCordova Museum, Rose Art Museum, and the Courthouse Gallery in Co. Mayo, Ireland. She has received fellowships and awards from the Ucross Foundation, The Ballinglen Arts Foundation, The Massachusetts Cultural Council, The Blanche E. Colman Foundation, The A.R.T Grant Fund, and an AICA Boston Best Show Award. Her work is in the permanent collections of the Provincetown Art Association and Museum, DeCordova Museum, Simmons College, Wellington Management, Fidelity Investments, and many private collections in the US, UK, Mexico and Japan.

The Cuban artist ALEX HERNÁNDEZ DUEÑAS conceives the artistic creation from a trans-disciplinary perspective. Recent work is concerned with aesthetic preferences and contemporary lifestyles. In this sense, he appeals to concepts like comfort, status, luxury, prosperity and commodities, all these parameters connected to hierarchal structures within the society and associated to specific cultural patterns. In the spirit of David Hockney, Richard Diebenkorn and Alex Katz, the use of flat and shiny colors has simplified his compositions. The atmosphere becomes rarified: surreal and unusual, it disorients the viewer and alludes to that space in dreams where the expectations and desires of a human group are expressed.

His prints and sculptures seen in this exhibition reflect the Cuban dream of Miami and the US as a Hollywood set: swimming pools abound and perfectly manicured lawns surrounding clean, modern houses and constant sunshine. The work comments on the isolation of Cubans and their lack of awareness of the current realities of American life.

Hernández Dueñas is a graduate of the Higher Institute of Art (ISA) and is a member of The National Union of Writers and Artists of Cuba (UNEAC).

ADRIAN FERNANDEZ MILANES presents new work from his latest series titled, ‘Requiem’, color photographs printed on metallic papers that explore the identity of groups or social sectors in Havana and throughout the world using elements which define it best from an iconographic point of view.
The project is based on imagery found in Cuban 20th century postage stamps, panning different periods of Cuba´s life as a nation, his different social projects, ideologies and paradigms. These startlingly beautiful images which relate to themes of power, identity, heroism and purity also address one of photography’s oldest jobs, to document and transport information, recalling the images’ function as symbol and icon while leaving space and breath to investigate our relationship to both.

Born in Havana, Cuba, Adrián Fernández (1984, Cuba) studied visual arts at the San Alejandro Fine Arts Academy and later at the Superior Institute of Arts in Havana. Adrián currently works as an independent artist and as a professor on Documentary Photography for NYU, Tisch School of the Arts, Office of Special Program Abroad and the Ludwig Foundation of Cuba. He has exhibited internationally in several group and solo shows, and his work can be found in private and public collections worldwide.

CONRAD H. MALICOAT (1936–2014) was a sculptor who created both large- and small-scale works of wood, metal, brick, or stone, generally using one material at a time. He also created works on paper, primarily with ink. On occasion, he consciously produced “public” work seen in local restaurants, inns, external brickwork, and graveyards; most of the time, his work was personal in nature, whether commissioned or originating purely within.

Conrad was born in Provincetown. His parents, Philip and Barbara Malicoat, were highly regarded artists and prominent figures in the local community. They raised Conrad and their daughter, Martha, in a household saturated with art and music, and instilled in them a love of nature and proud, do-it-yourself spirit. After graduating from Provincetown High School, Conrad attended Oberlin College in Oberlin, Ohio and graduated with a BA in Studio Art in 1957. After an eventful year in Paris, he attended the Skowhegan School of Painting and Sculpture, where he met fellow artist Anne Lord. They married in 1960, and after stints in New York City and travels across the country to Texas and back, they settled in Provincetown and forged a life dedicated to family, community, and the arts. Whether by nature or nurture, or both, Conrad possessed a keen ability to think abstractly, which made him a formidable problem solver often called upon by friends and family, and also produced unique work when applied on a strictly artistic level.

During the earlier years, Conrad worked primarily in stone, a medium he regarded with respect and affection throughout his life. As responsibilities to his young family necessitated more income than was generated by his stonework, he devised a new means to earn a living: Creative brickwork rendered as imaginative walls, fireplaces, and sculpture became his signature oeuvre on the Outer Cape and beyond from the mid-1970s through the mid-1990s. “Have trowel, will travel,” he stated on his ‘Brick Breakthroughs’ business card. Initiated in necessity, the brickwork evolved as modular expression, an exploration of weight, planes, gravity, and multiple dimensions. In the midst of two decades of brickwork, Conrad explored mathematical themes such as the Mobius in wooden and metal sculptures, and in the two-dimensional realm he delved deeply into the works in ink on paper in this exhibition. The abstract, brick-like, and figurative drawings include studies for some of his sculptures from the 1980s.

For this exhibition we will present a suite on new paintings.

Trained as an architect, RICHARD CLOUTIER completed a Master’s degree in Visual Arts in 2006 and has been actively focusing on his artistic production for the past 14 years. He will present a special project with the gallery consisting of one large and two smaller paintings. His work has been shown in Montreal, Toronto and France. He has exhibited frequently in Provincetown, Massachusetts, allowing him to spread his work in many private collections in New York, Boston, Los Angeles and other cities in the USA, along with Europe. The Loto-Québec Collection, an important public collection in Canada, purchased in 2008, 2009 and 2013 four of his works, all of which had been part of traveling exhibitions throughout Quebec during the last years. In March 2011, he has been invited to show a new series of paintings within the context of Laval University’s foundation 50th anniversary. During summer 2012, he has been part of a group show titled Repérages, which took place at the Baie-Saint-Paul Museum of Contemporary Art, an important artistic institution located in the inspiring Charlevoix region. In 2013, Cloutier won the Second Prize of the Quebec City Art Works Competition, in the Professional Artists category. He presented last Fall 2013 an important solo exhibition at the Galerie Bernard located in Montréal.

NONA HERSHEY‘s work is included in public and corporate collections around the world, including the Metropolitan Museum of Art, NY; Library of Congress; Fogg Museum; Yale University Art Gallery; Crakow National Museum; and the Calcografia Nazionale, Rome. She has participated in over 100 Print Biennials and Group Exhibitions internationally. She has had residency grants at the Asillah Forum Foundation, Morocco; Ballinglen Arts Foundation, Ireland; MacDowell Colony, NH; Ucross Foundation, WY; and the Vermont Studio Center. She taught at Tyler School of Art in Rome for 12 years and at Temple University’s program in Tokyo, Japan. Nona Hershey is currently Professor and Coordinator of the Printmaking Department at Massachusetts College of Art and Design in Boston. For this project we will present a suite of six new works on paper.