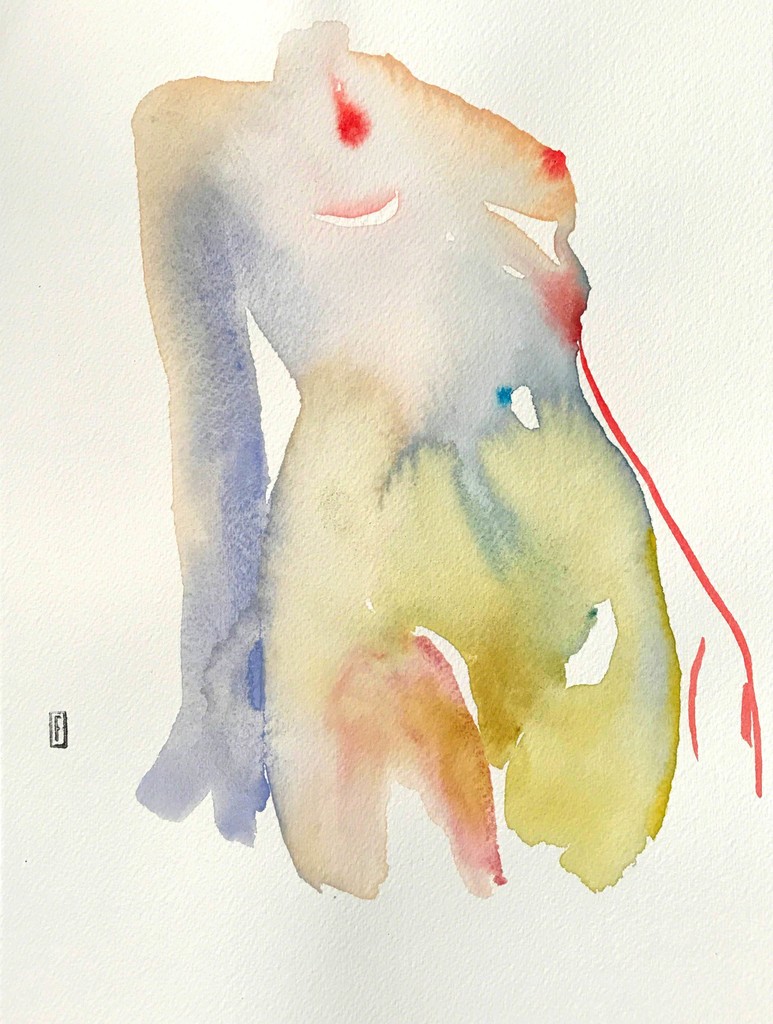 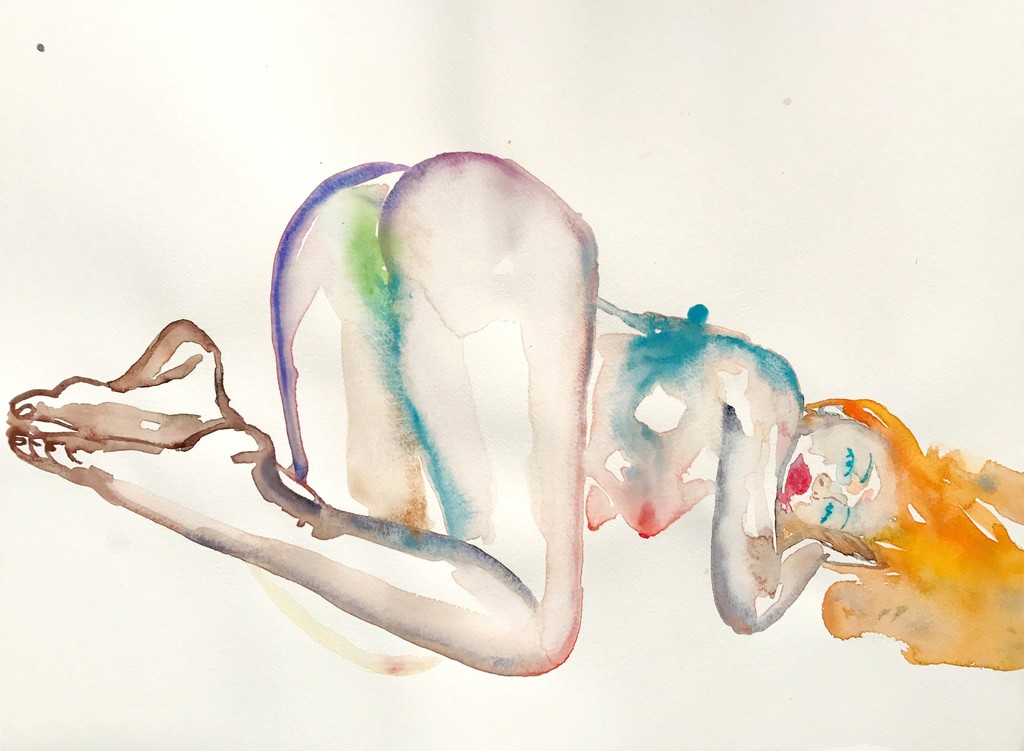 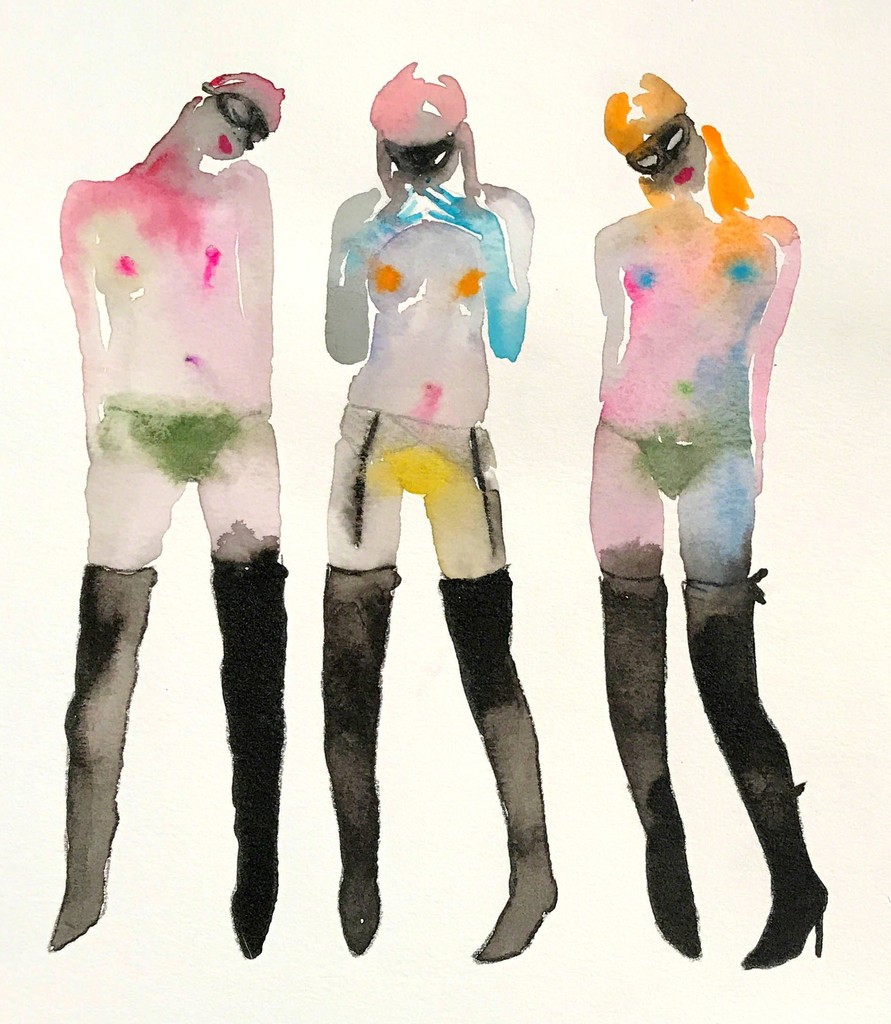 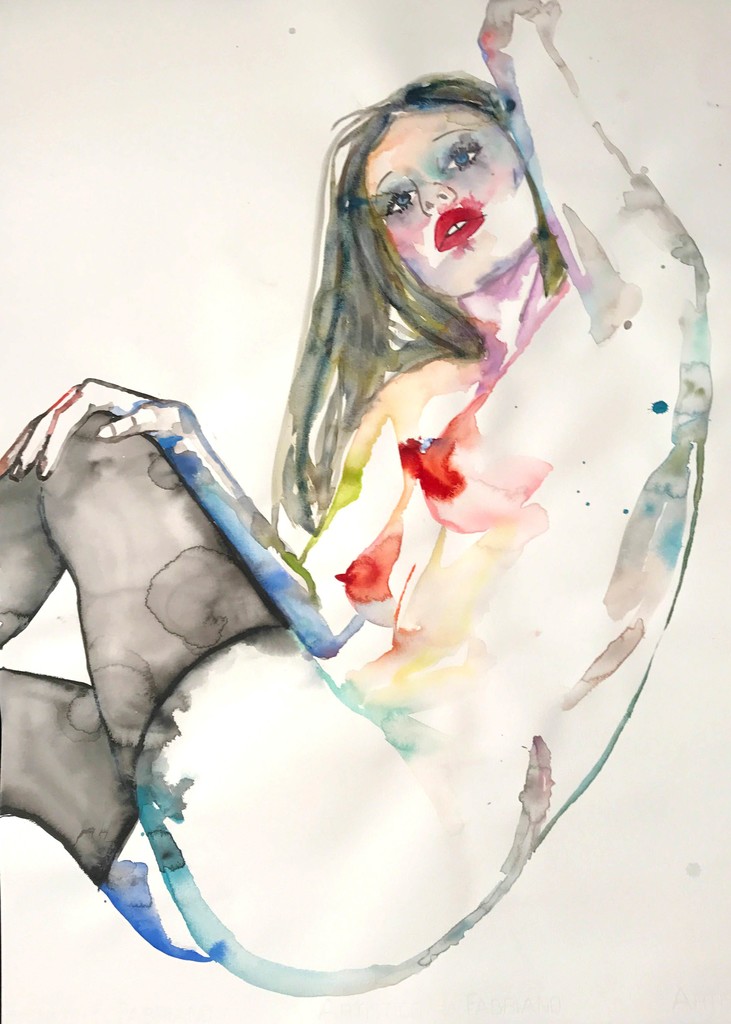 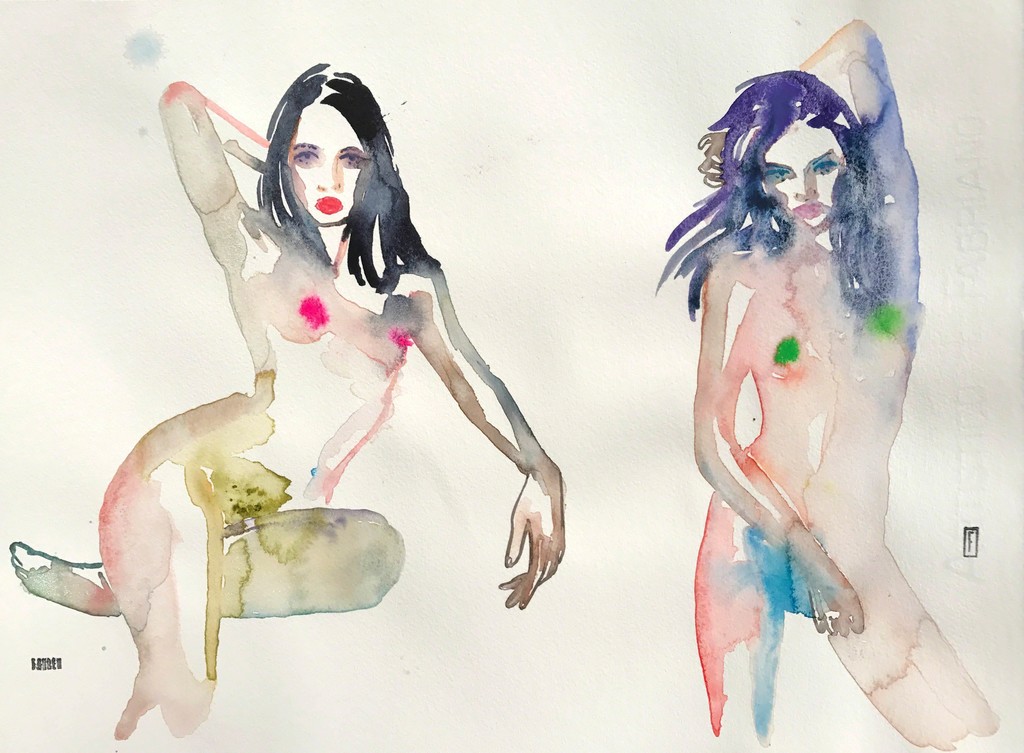 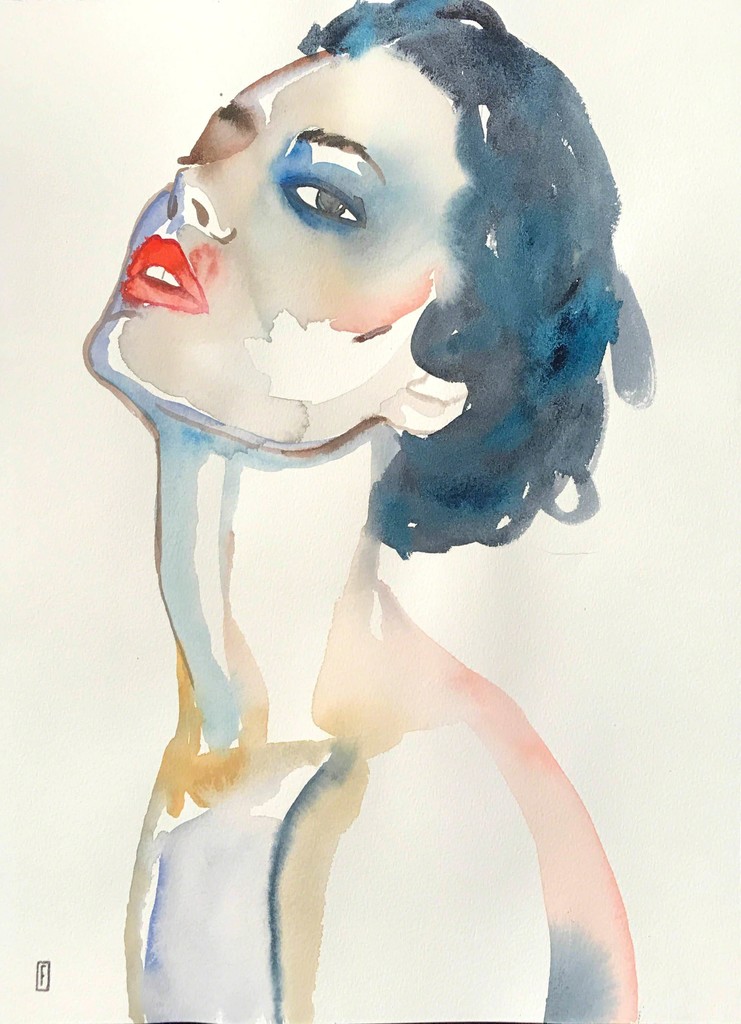 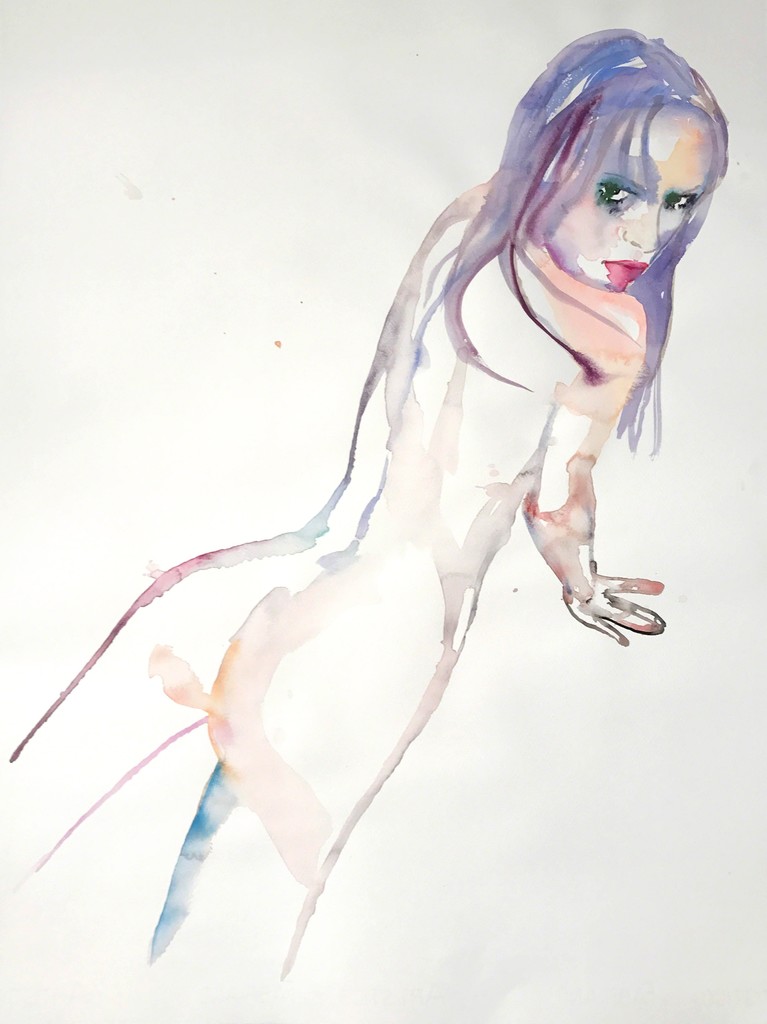 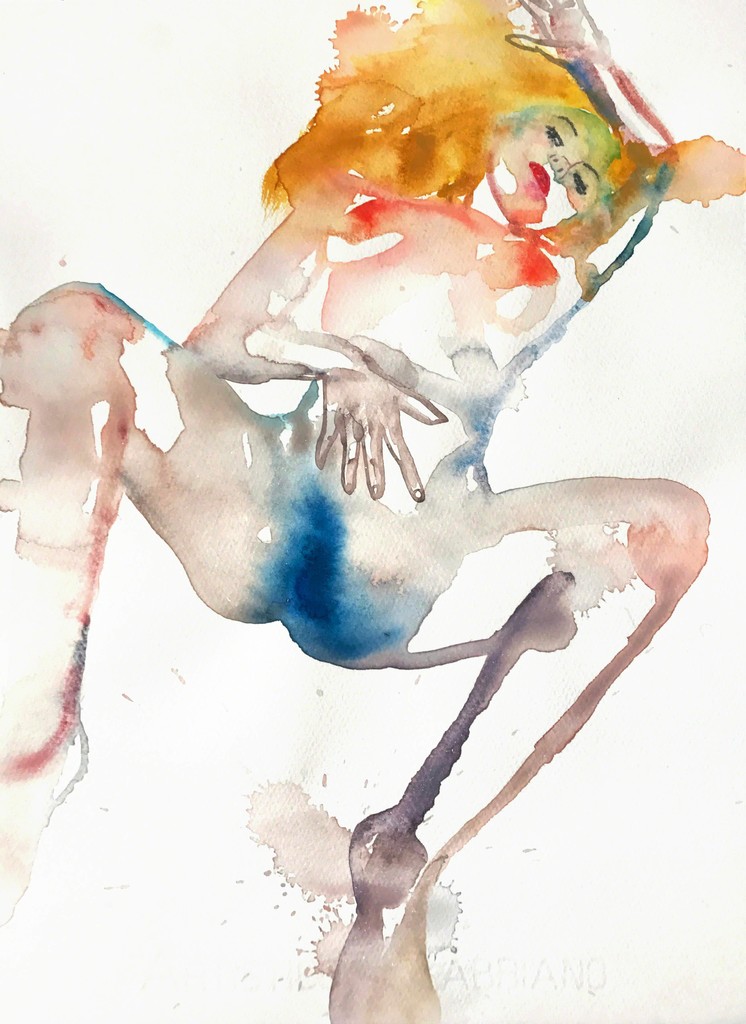 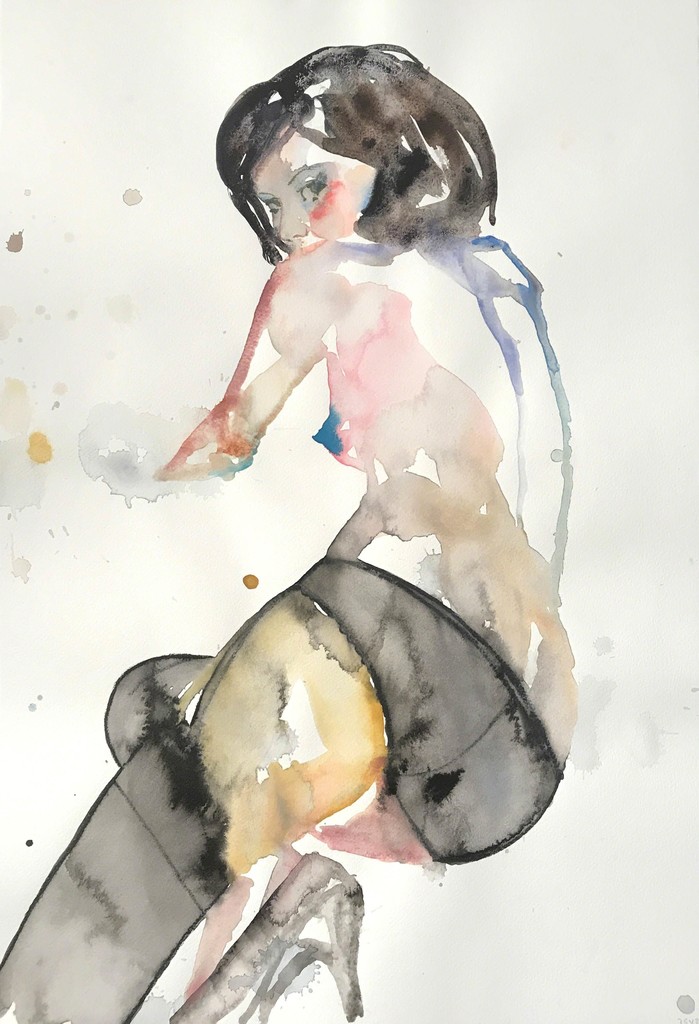 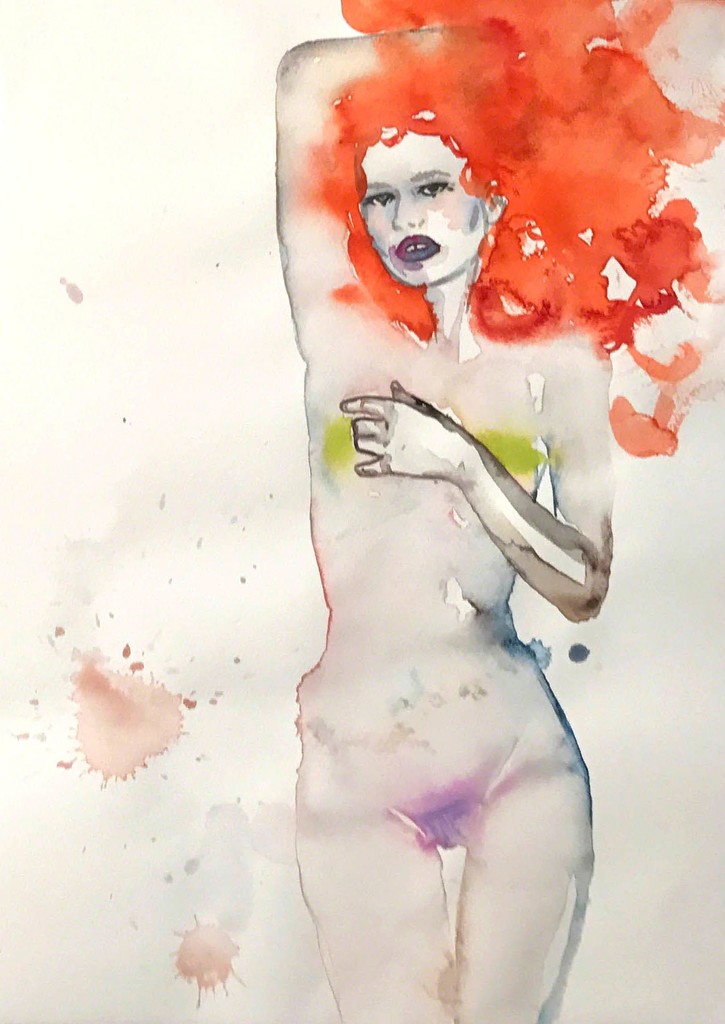 The Untitled Space gallery is pleased to present a debut solo exhibition of works by artist Fahren Feingold opening September 26th and on view through October 8th, 2017. The exhibition, curated by gallery director Indira Cesarine, will feature over fifty watercolors by the artist, who will be presenting a new series of large-scale watercolor paintings along with many of her signature works. Touted as “a trailblazing artist on a meteoric rise” by Vogue, watercolor artist Fahren Feingold brings an ethereal state to her unique paintings depicting the female form. Her watercolors featuring bold feminine nudes reference imagery from early 20th century French erotica, 70s & 80s American vintage magazines, and today’s Internet girls. The Los Angeles native moved to New York at the age of seventeen to study at the Parsons School of Design. After earning her BFA between Parsons and Glasgow School of Art, she worked as a fashion designer for top brands including Ralph Lauren, Nicole Miller, and J.Crew, among others. In 2016, her dreamy watercolors caught the eye of the legendary Nick Knight, who commissioned her to illustrate Paris Fashion Week for SHOWStudio. Between 2016 – 2017, her work has been featured in numerous international exhibitions, including “Moving Kate” curated by Nick Knight at SHOWStudio in London and The Mass in Tokyo, Japan, “The Vulgar” at The Barbican, London curated by Judith Clark and Adam Phillips, “Red Hot Wicked” at Studio C Gallery in Los Angeles, as well as The Untitled Space group shows “UPRISE / ANGRY WOMEN” and “SECRET GARDEN” curated by Indira Cesarine and “LIFEFORCE” curated by Kelsey and Remy Bennett.

Artist Statement:
“Nude paintings are a beautiful part of our history in art and culturally. Yet there still remain a lot of people who are frightened by nudity (their own and others). I paint the female figure as others before me, and continue to push boundaries by exploring current political constructs of feminism through erotic imagery. My brushstrokes are languid as I paint in a ‘wet’ style of watercolors, using many complimentary colors, which wash together in an almost ghostly spirit. This soothing technique, normally used for flowers and landscapes, I manipulate as a veil to present my direct and often bold messages about female sexuality, empowerment and equality.
When I paint a woman, I imagine giving back her emotional voice, where she may have felt stifled otherwise. I don’t look to paint people as they look, but rather as I feel them, which is why viewers will often not know the natural skin color – since I paint in watery aura like dreamy colors. When someone stands in front of my painting, I hope they really take a moment with it. I want my viewers to see feminine humanity, intimate beauty, and fearless ethos above all else – because that is the core of all women.” Fahren Feingold

ABOUT THE UNTITLED SPACE:
The Untitled Space is an art gallery located in Tribeca, New York in a landmark building on Lispenard Street. Founded in 2014 by Indira Cesarine, the gallery features an ongoing curation of exhibits of emerging and established contemporary artists exploring conceptual framework and boundary pushing ideology through mediums of painting, sculpture, printmaking, photography, video and performance art. The gallery is committing to exploring new ideas vis-à-vis traditional and new mediums and highlights a program of "Women in Art" as well as special events aligned with our creative vision.