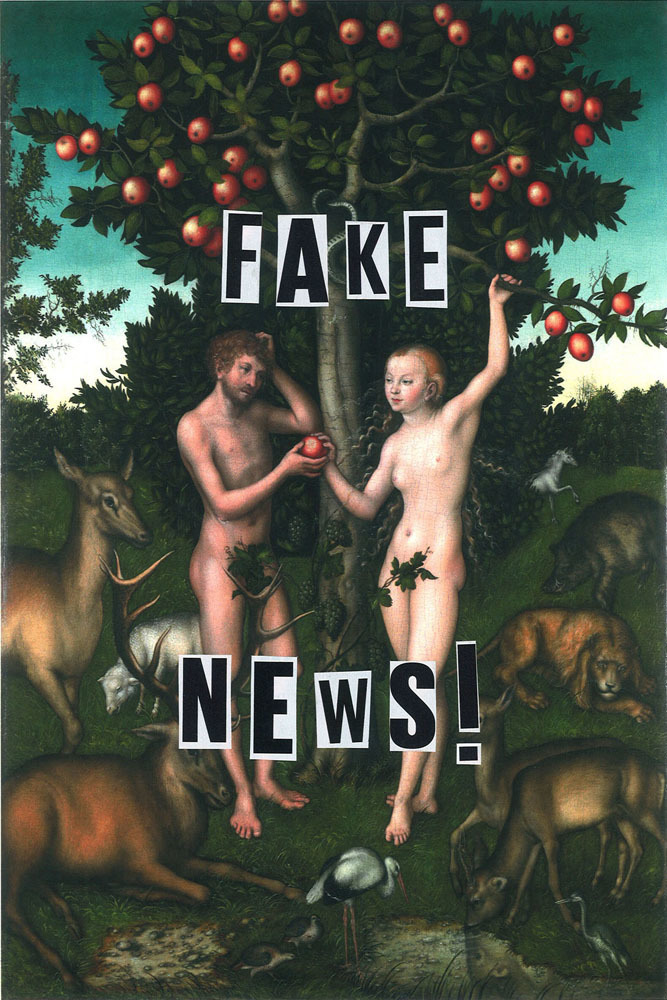 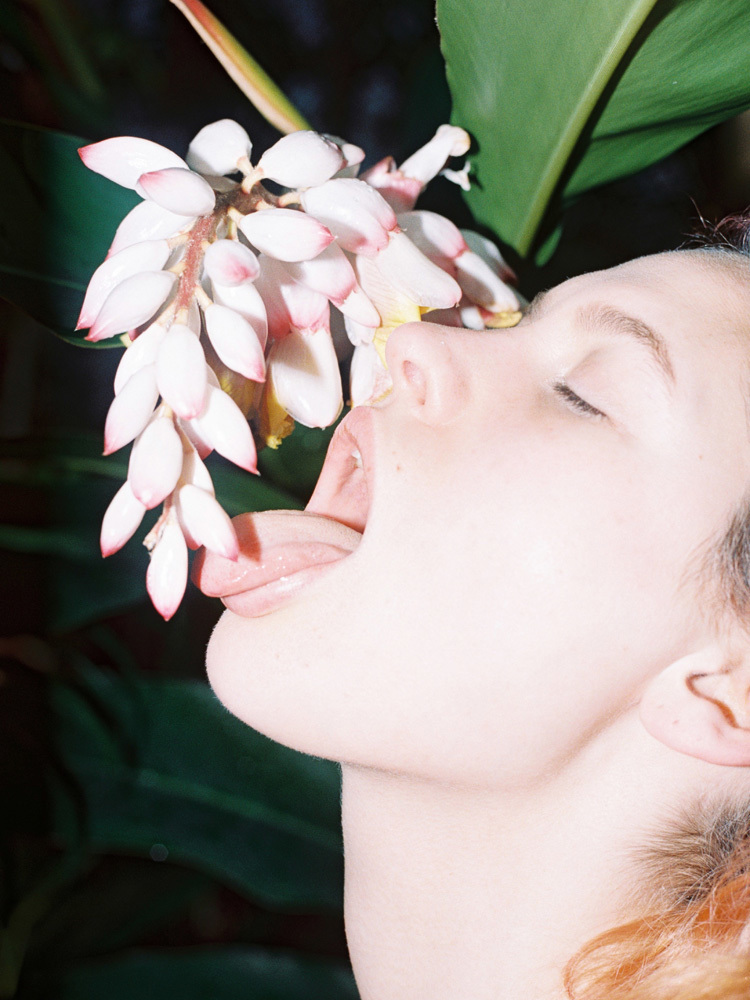 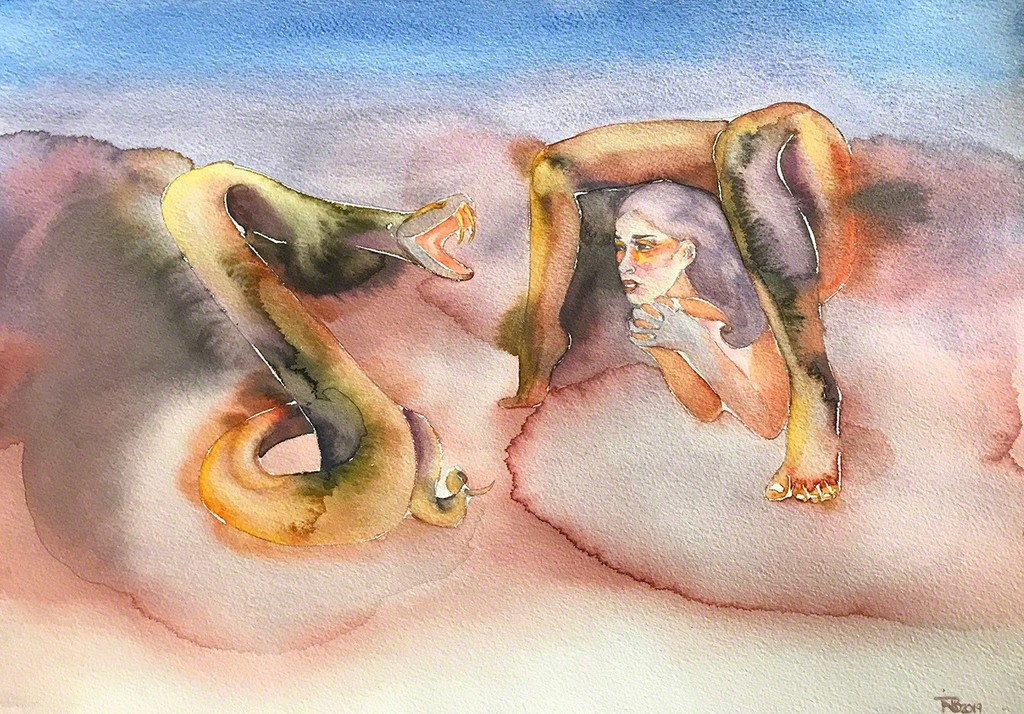 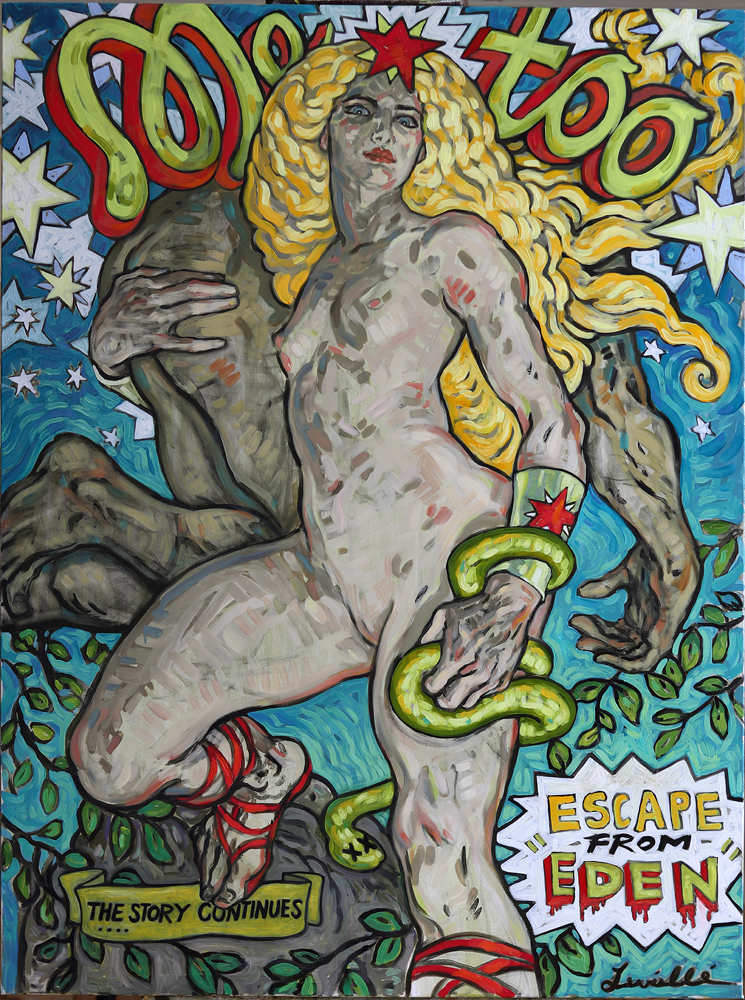 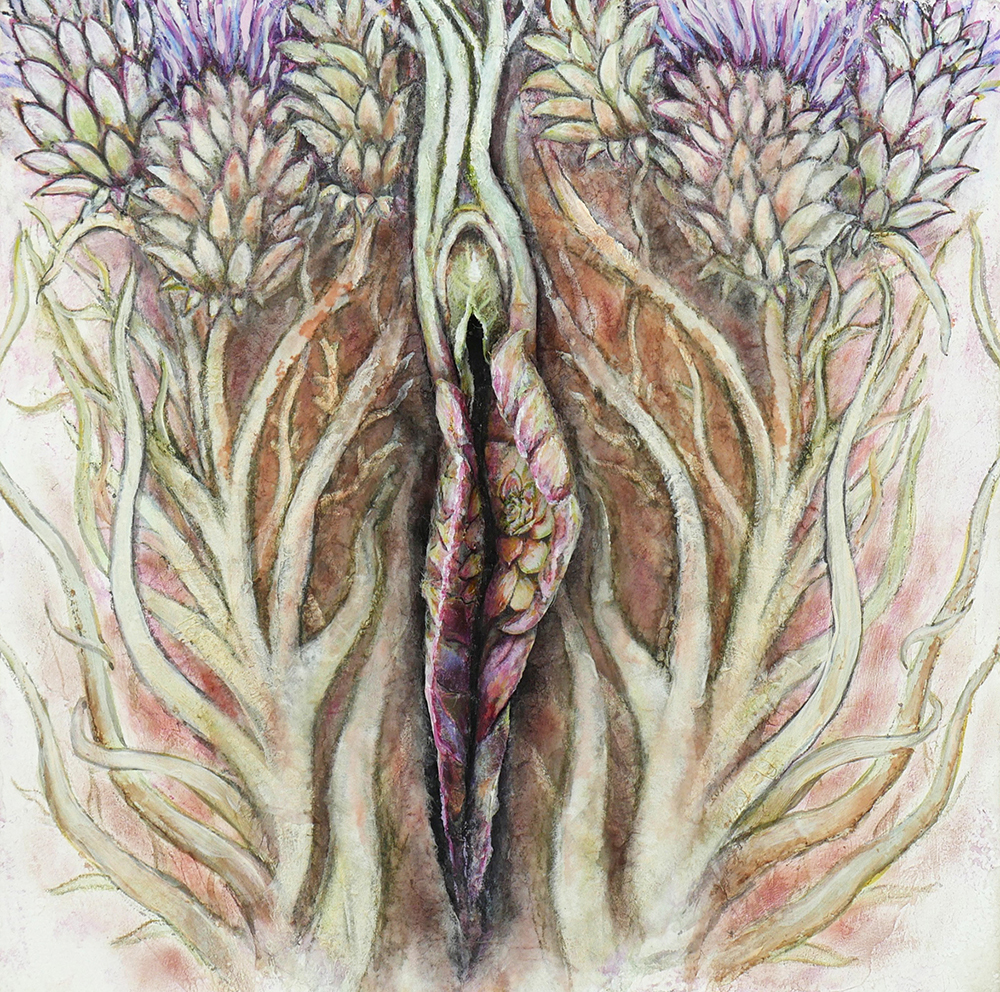 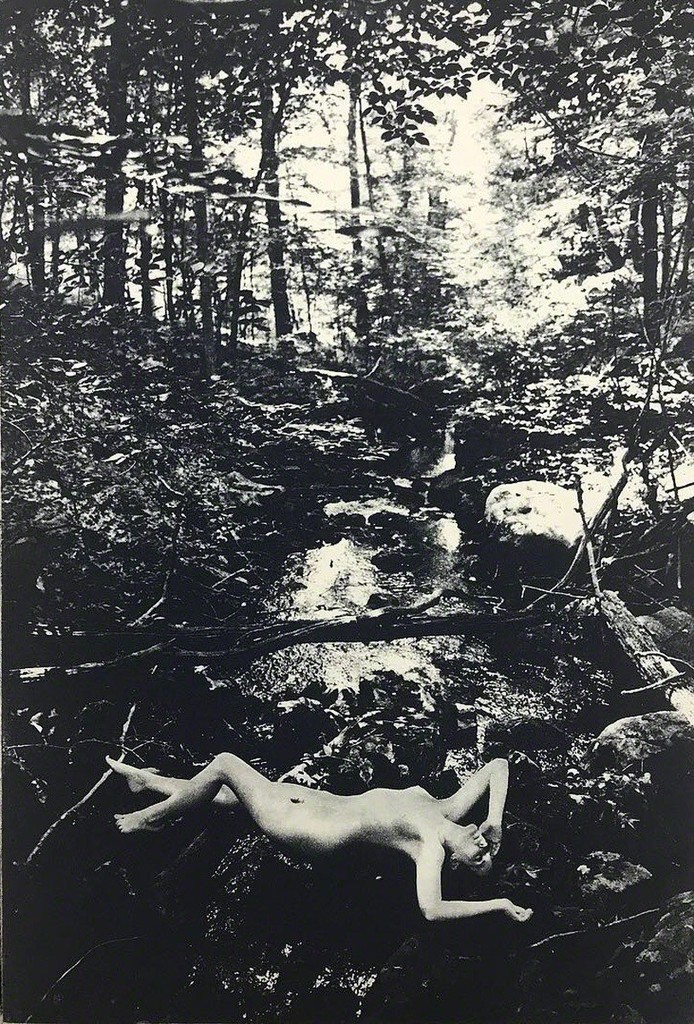 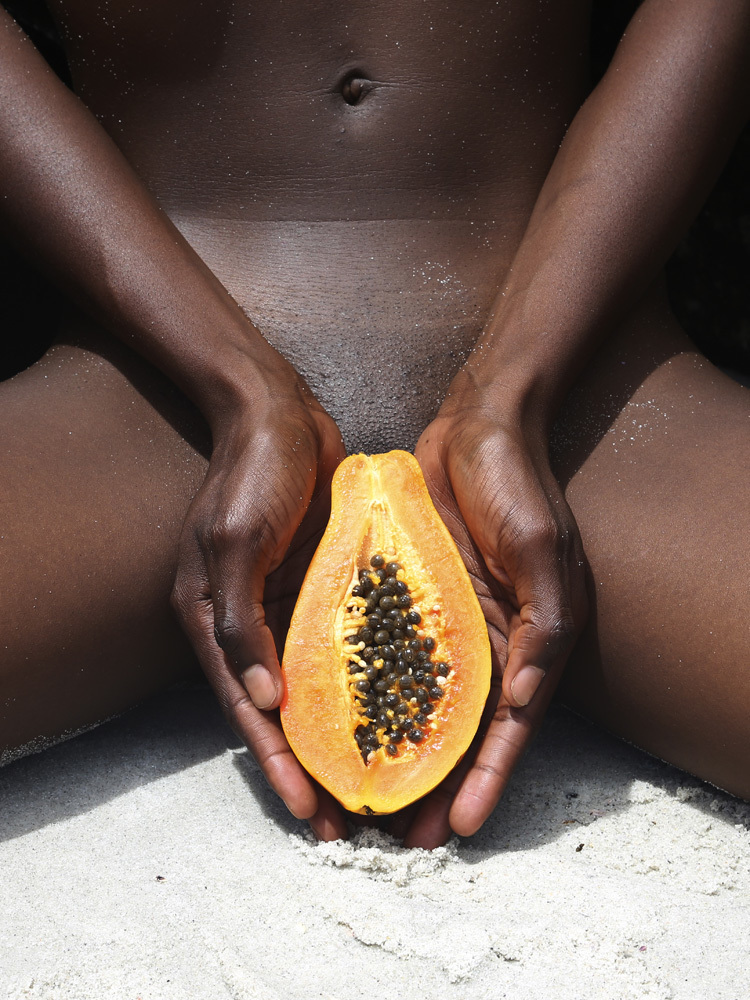 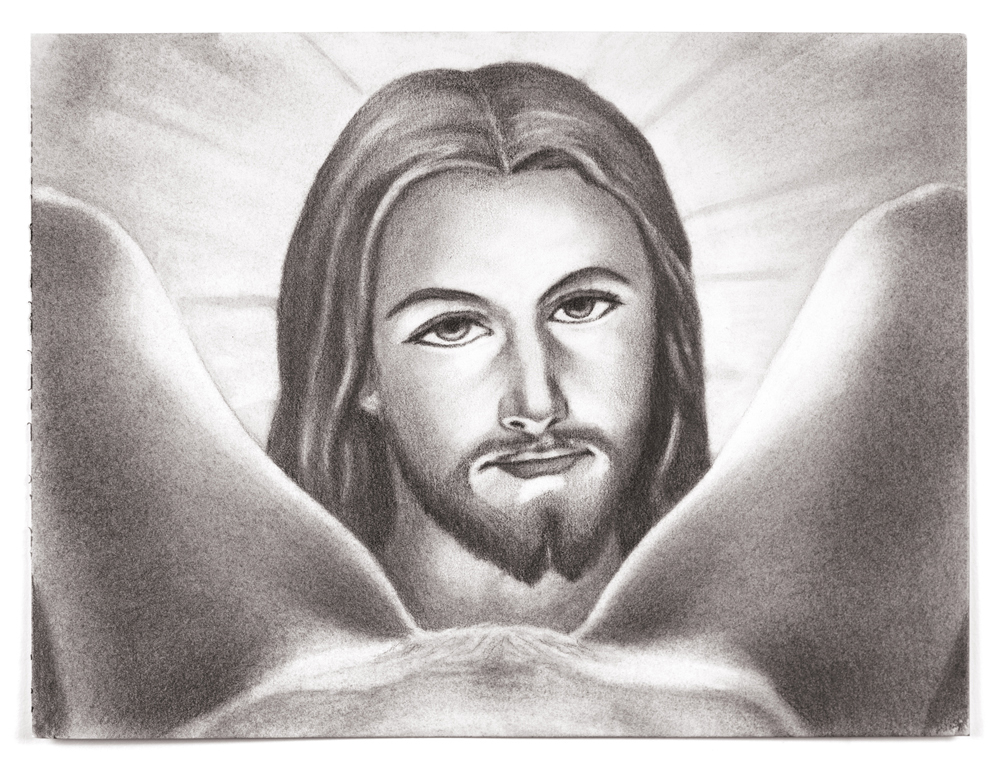 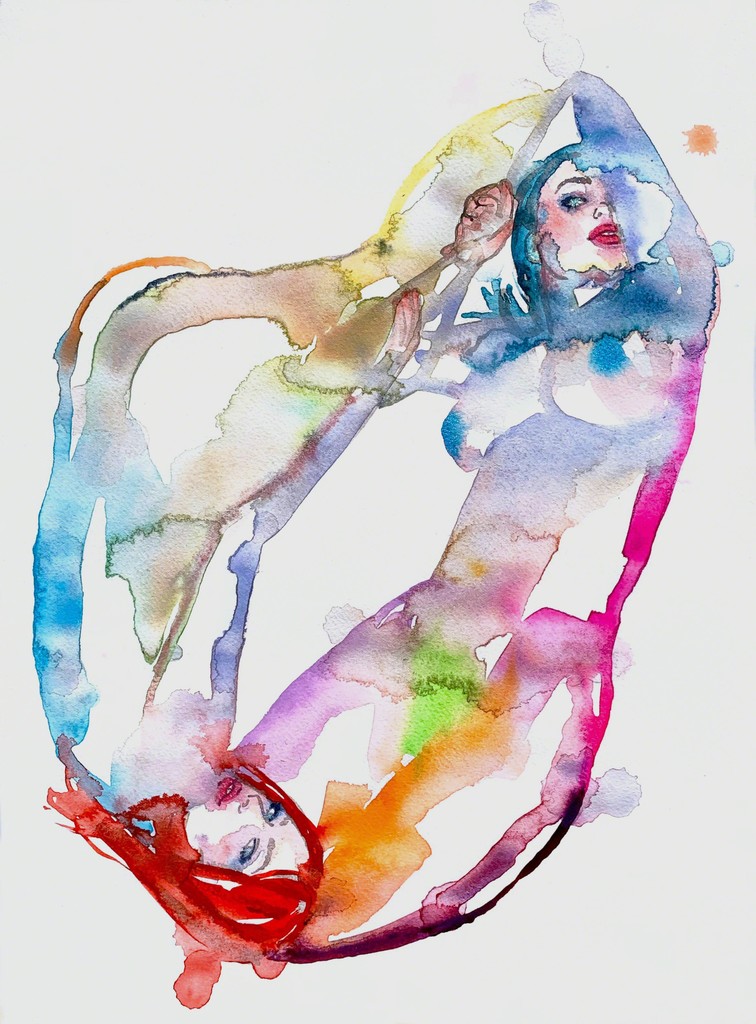 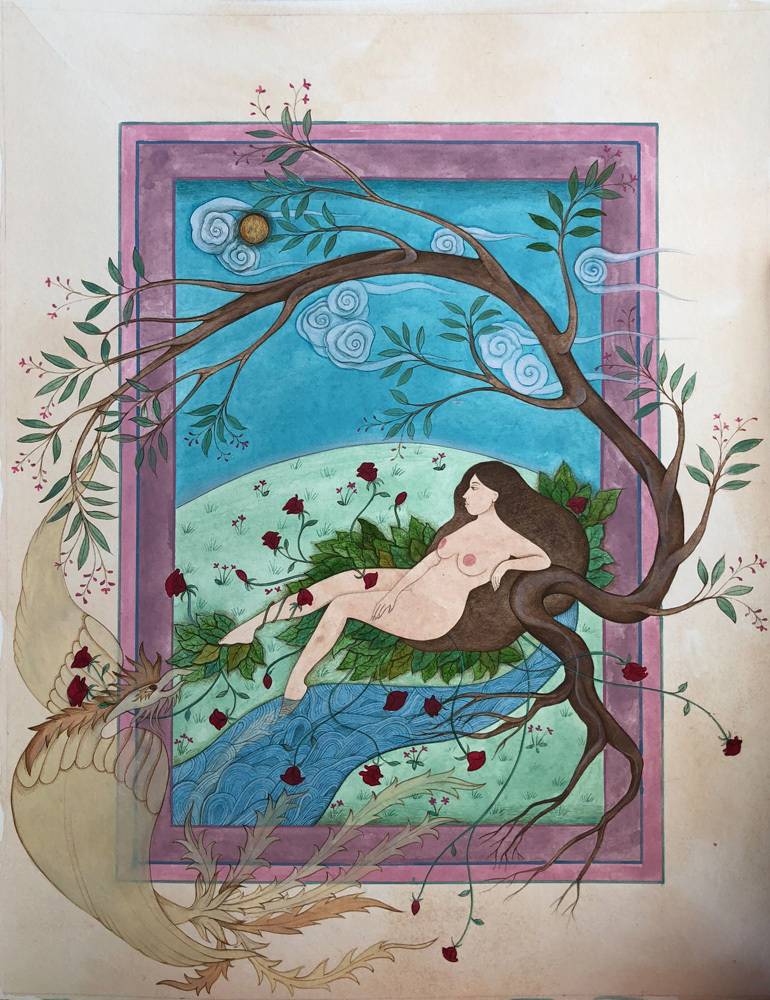 The Untitled Space is pleased to present “EDEN” an immersive installation and group exhibition curated by Indira Cesarine for SPRING/BREAK Art Show 2019. The Special Project, which will be on view from March 5th – 11th at the UN Plaza in New York City, will feature over 20 female identifying artists exploring the history and symbolism of the Garden of Eden. SPRING/BREAK Art Show, known as being one of the worlds most innovative art fairs, is an annual experimental platform for independent curators to exhibit works by emerging and mid-career artists. This year’s edition, which will feature over 85 curators, revolves around the theme “Fact and Fiction.”

The Garden of Eden, a biblical paradise which was called “The Garden of God” in the books of Genesis and Ezekiel, the "lower Gan Eden” In the Talmud and the Jewish Kabbalah, is known for being a utopian garden lush with trees and fruits, as well as the birthplace of the first humans, Adam and Eve. According to the Bible, Eve, the first woman, was created by God from the rib of Adam to be his companion in the Garden. The first couple were said to have lived in Eden naked, liberated from any sense of self-consciousness, shame or fear, as they were completely innocent. The "Temptation of Eve” by a serpent to eat the forbidden fruit from “the tree of the knowledge of good and evil” resulted in humans being expelled for eternity from The Garden of Eden. Eve (and all women thereafter) was subsequently sentenced to a life of sorrow and pain with childbearing, and to be under the power of her husband in a subservient role for the rest of humanity for her actions. Although many people believe The Garden of Eden did in fact exist, it is considered to be mythological by most scholars.

The “EDEN” installation and exhibition at SPRING/BREAK Art Show 2019 will present conceptual works across all mediums including painting, drawing, sculpture, photography, collage, mixed media, and performance, that explore the myth and beauty of Eden, as well as the roles of Adam and Eve, the concept of original sin, of sexual temptation, and the religious belief system that as a result of Eve's actions, women for eternity must pay for her sins.

CURATORIAL STATEMENT
“For this year’s SPRING/BREAK Art Show, revolving around the theme of “Fact and Fiction,” I was inspired to create an immersive installation and group exhibition that investigates the history, symbolism and cultural impact of the Garden of Eden from a feminist perspective. One could say the “Garden of Eden” is not only the questionable birthplace of humanity and original sin, but also the first “fake news” known to mankind. Is it fact or fiction? Incredibly thousands of years later, the existence of the Garden of Eden is still heavily debated. For the exhibition I have created a garden, with grass, trees and flowers, ripe with conceptual works by female artists across all mediums that explore the myth of Eden, the roles of Adam and Eve, the concept of original sin, of sexual temptation, and the religious belief system that as a result of Eve's actions, women for all eternity must pay for her sins with the pain of childbearing and subservience to man.

One could say the story of Adam and Eve in the Garden of Eden is the root of misogyny in patriarchal societies and has resulted in women being subjected to discrimination and “justified” inequality for thousands of years. Equally the sexual liberation and beauty of the Garden of Eden has been romanticized throughout the canon of art history. I felt it was time to explore The Garden of Eden in context with feminist art today, including the stereotypes, symbolism, and sexuality of Eden, and liberate Eve from being a woman condemned.

Almost all of the artists featured have created new works specifically for the exhibition that directly address the symbolism and historical impact The Garden of Eden has had on our culture, in the past and present. I am also thrilled to have renowned dancer Katherine Crocket and celebrated body painting artist Trina Merry present a special live performance on March 10th.” - Curator Indira Cesarine

Artists featured in “EDEN” include Alexandra Rubinstein, whose paintings explore how society and culture have shaped gender and intimacy; Anne Barlinckhoff, an artist whose work is an study of the human body and our relationships; Fahren Feingold, who creates intimate watercolors that give voices to women of past and present; Gracelee Lawrence who creates sculptures and installations with works that dispute gender norms by replacing bodies with representations of “forbidden” fruit; Hiba Schahbaz who depicts women’s bodies while referencing self-portraiture to create a space for women to tell their stories and reclaim their histories; Jacqueline Secor a mixed media artist who celebrates of the diversity of female genitals using elements of nature; Jasmine Murrell a sculptor who create works in order to blur the line between history and mythology; Jessica Lichtenstein who uses the female body as a mechanism to explore deeper themes of power, female representation, fetishism and objectification; Leah Schrager, who manipulates her own body to investigate and deconstruct the biography of the female; Rachel Marks, an installation artist whose work engages the relationship between nature and language by investigating identity through integration; Rebecca Goyette, a visual and performance artist who embraces sexual desire and engages panoply of non-normative gender roles; Rebecca Leveille a figurative painter whose work incites dialogue around the nature of sex and myth in contemporary culture emphasizing the female gaze; Sarah Maple, a Muslim artist known for her mischievous and controversial artwork that challenges notions of identity, religion and the status quo, as well as Tina Maria Elena, specializes in sensual and erotic watercolors from the female perspective, among others.

ABOUT INDIRA CESARINE
Indira Cesarine is a multimedia artist and curator. In 2014, she founded The Untitled Space gallery, which highlights a program of feminist art. Cesarine’s curatorial for The Untitled Space includes solo shows for artists Sarah Maple, Rebecca Leveille, and Fahren Feingold as well as group shows "(HOTEL) XX" at SPRING/BREAK Art Show 2018; ”SECRET GARDEN” presenting the female gaze on erotica; “SHE INSPIRES,” a group show of 60 artists exhibiting works honoring inspirational women; internationally-celebrated group shows “UPRISE/ANGRY WOMEN,” and “ONE YEAR OF RESISTANCE” responding to the political climate in America since the election of Trump, as well as numerous other critically-acclaimed exhibitions.

Cesarine's first solo exhibition was at the age of sixteen at the Paul Mellon Arts Center. A graduate of Columbia University with a triple major in Art History, French and Women’s Studies, she additionally studied art and photography at Parson’s School of Design, ICP, SVA, the Art Students League and New York Academy of Art. Her work as an artist has been featured internationally at many art galleries, museums and festivals, including The Metropolitan Museum of Art, Mattatuck Museum, CICA Museum, San Luis Obispo Museum of Art, Getty Images Gallery, French Embassy Cultural Center, Art Basel Miami, Cannes Film Festival and the International Festival Photo Mode to name a few. In 2014, her public art sculpture, “The Egg of Light” was exhibited at Rockefeller Center. Her work was auctioned at Sotheby’s New York for the annual “Take Home A Nude” art benefits in 2017 and 2018, and was featured at SPRING/BREAK Art Show, SCOPE Art Basel (Switzerland), AQUA Art Show and SCOPE Miami in 2018.

Over the past twenty years, her work has been featured in countless international publications including Vogue, Harper’s Bazaar, W Magazine, Newsweek, Forbes, and many other titles. She is additionally the founder of her own globally distributed publication “The Untitled Magazine.” As an artist and curator, she continues to explore her creative vision vis-à-vis traditional and new mediums and finds strength in examining new ideas in contemporary culture. Cesarine lives and works in Tribeca, New York.

ABOUT THE UNTITLED SPACE:
The Untitled Space is an art gallery located in Tribeca, New York in a landmark building on Lispenard Street. Founded in 2014 by Indira Cesarine, the gallery features an ongoing curation of exhibits of emerging and established contemporary artists exploring conceptual framework and boundary pushing ideology through mediums of painting, sculpture, printmaking, photography, video and performance art. The gallery is committing to exploring new ideas vis-à-vis traditional and new mediums and highlights a program of women in art as well as special events aligned with our creative vision.