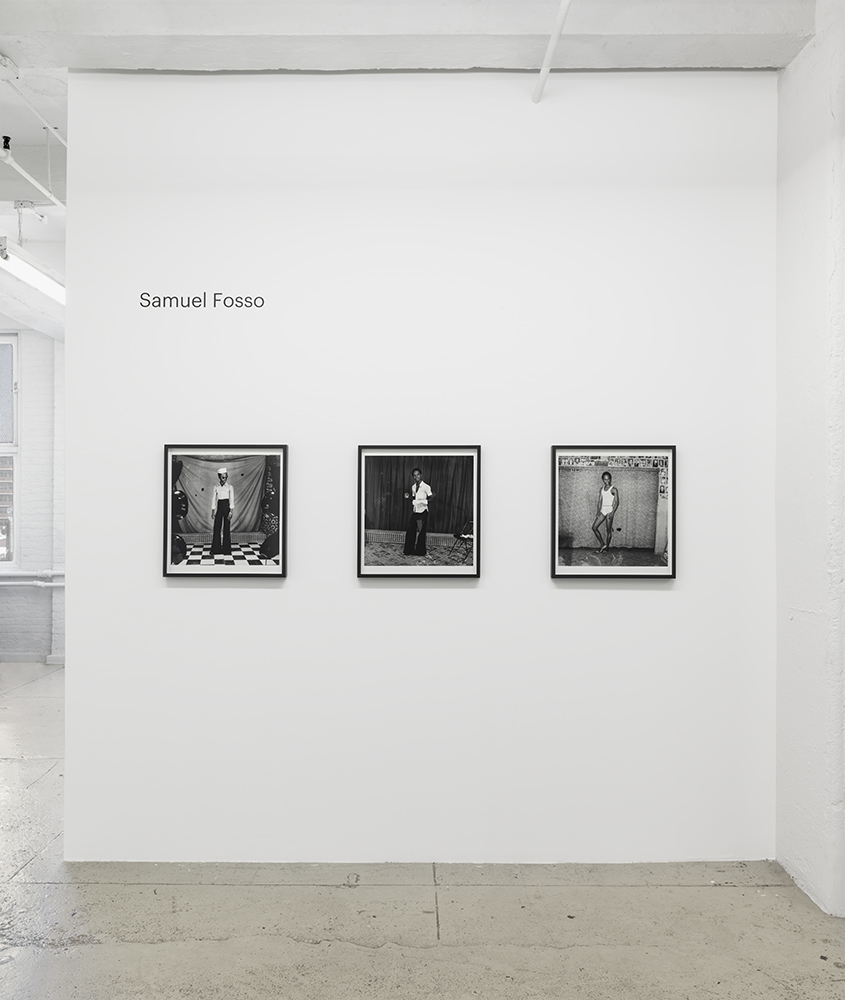 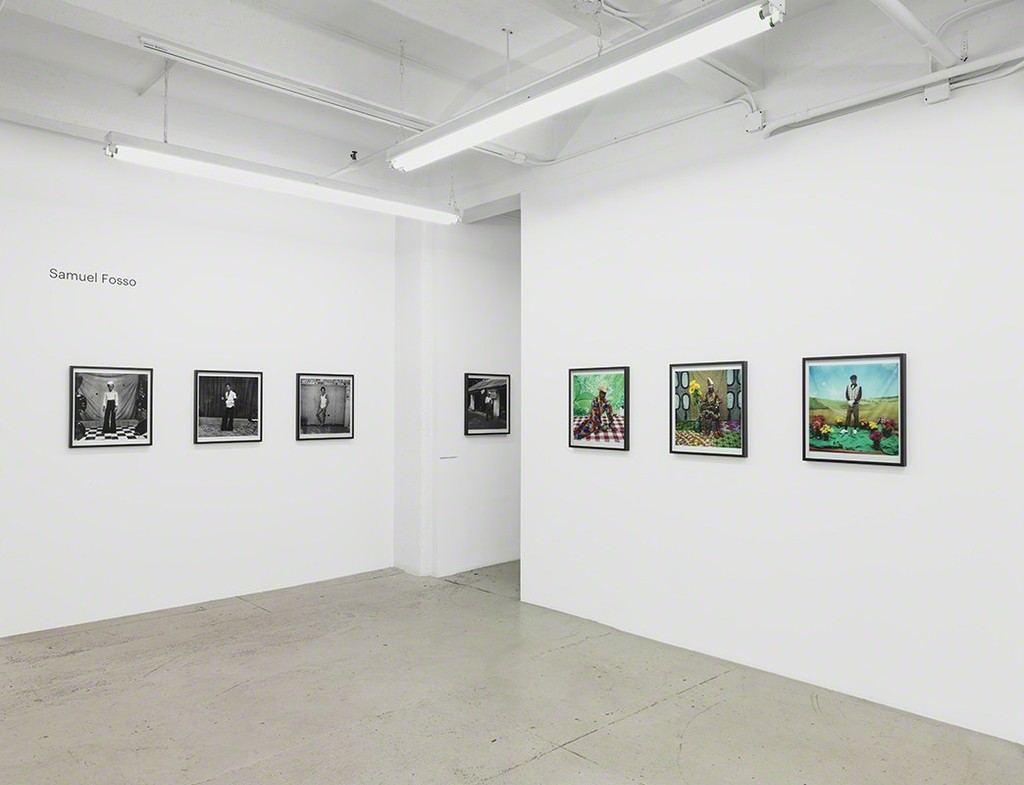 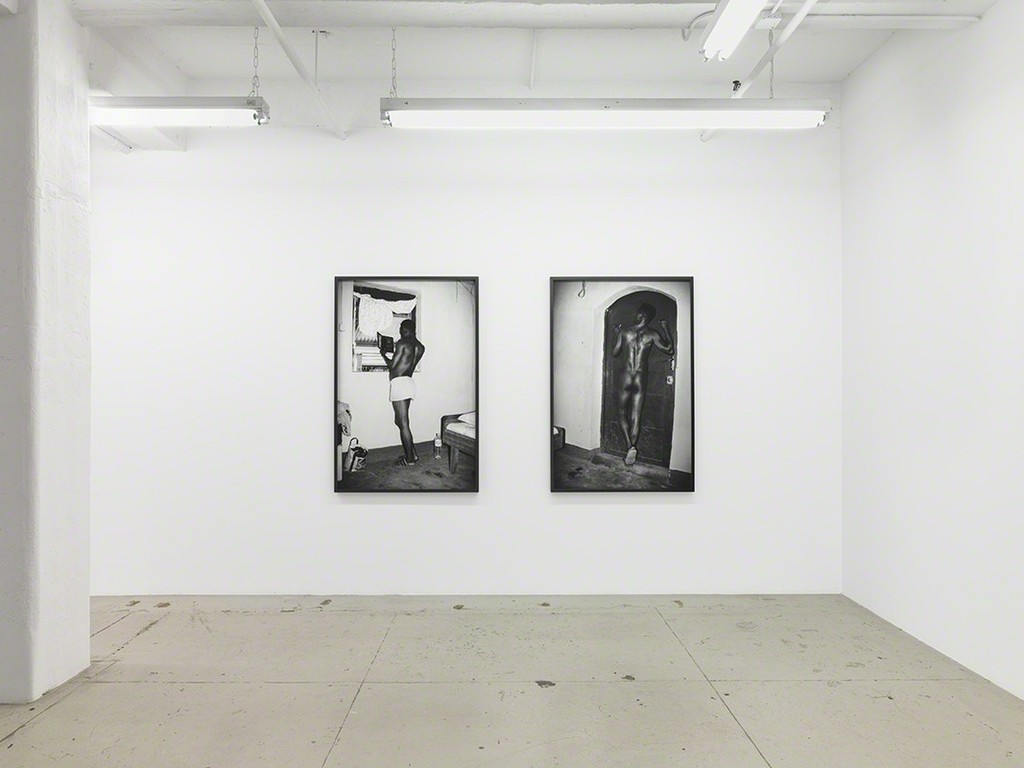 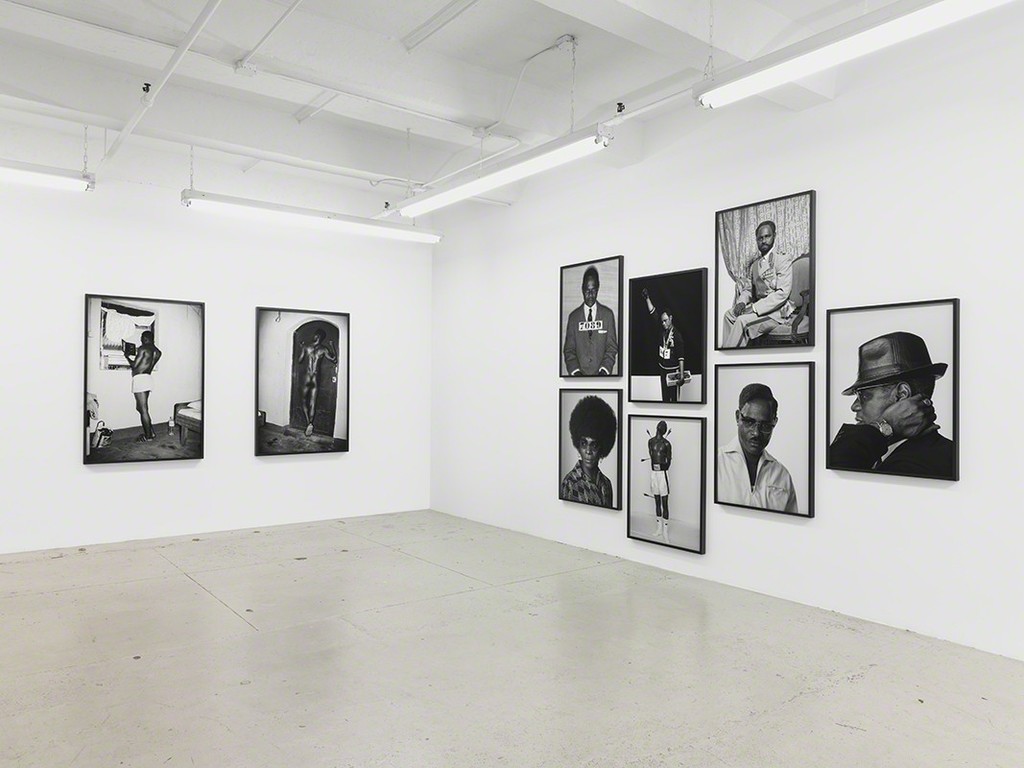 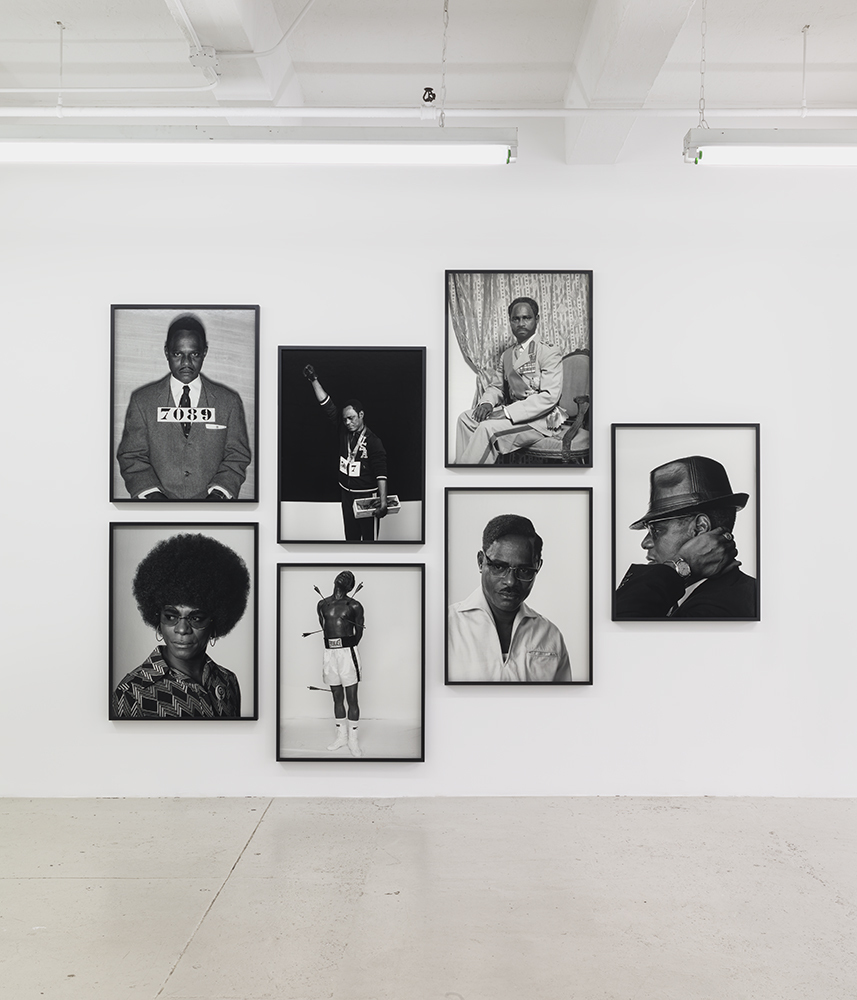 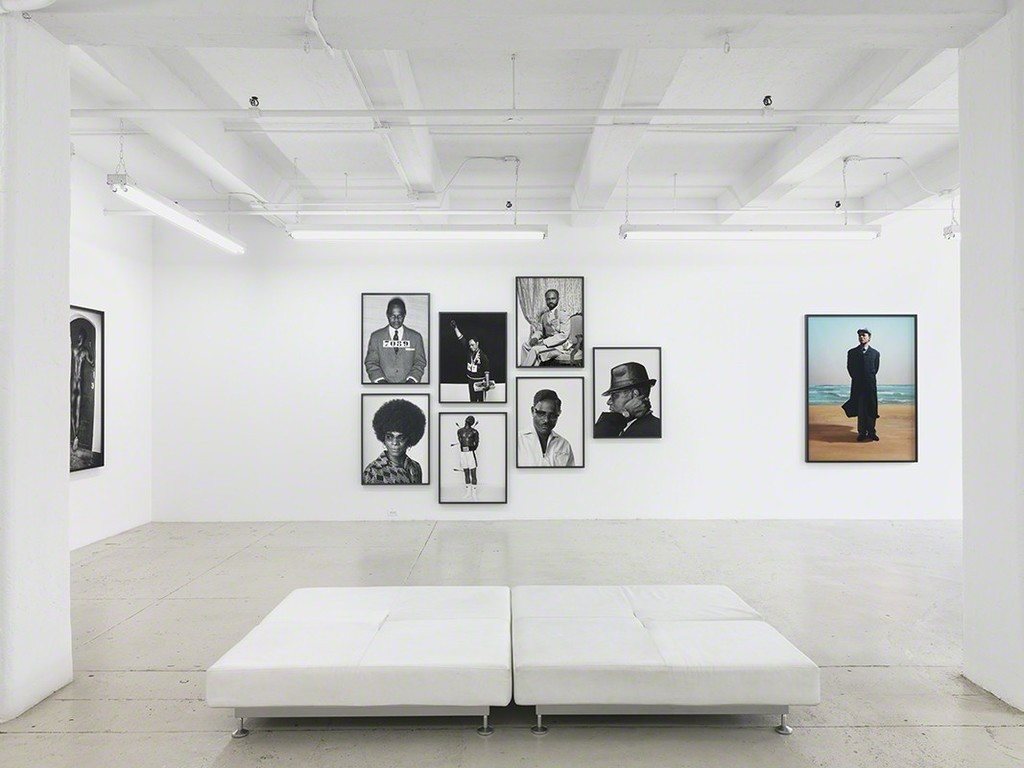 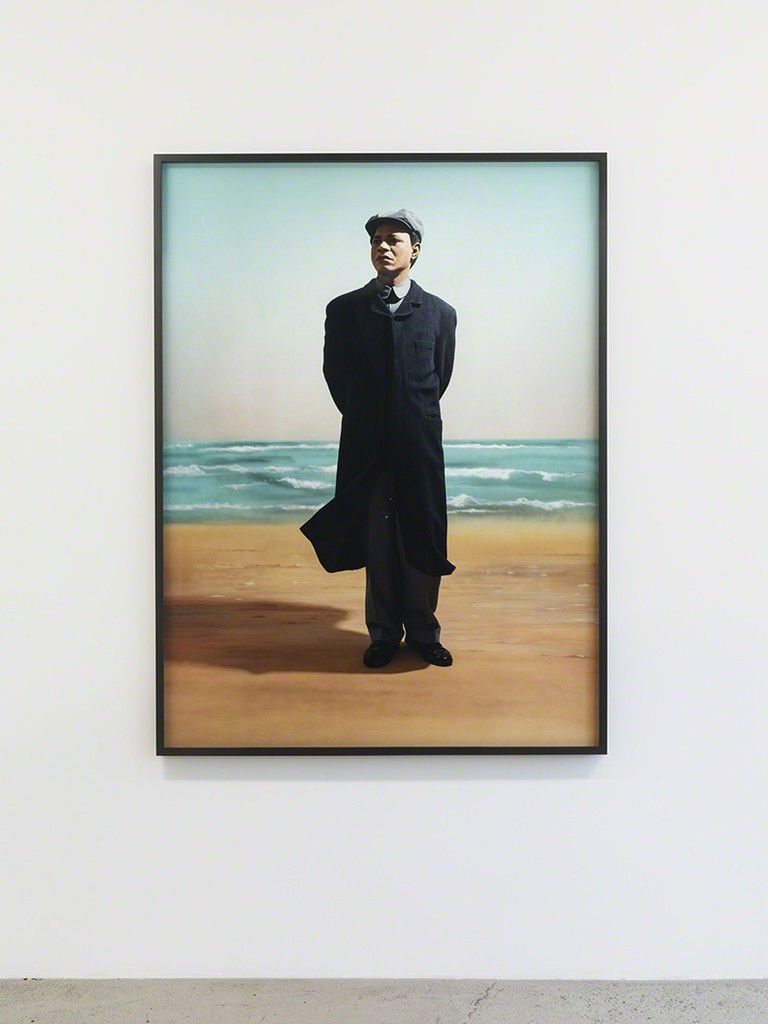 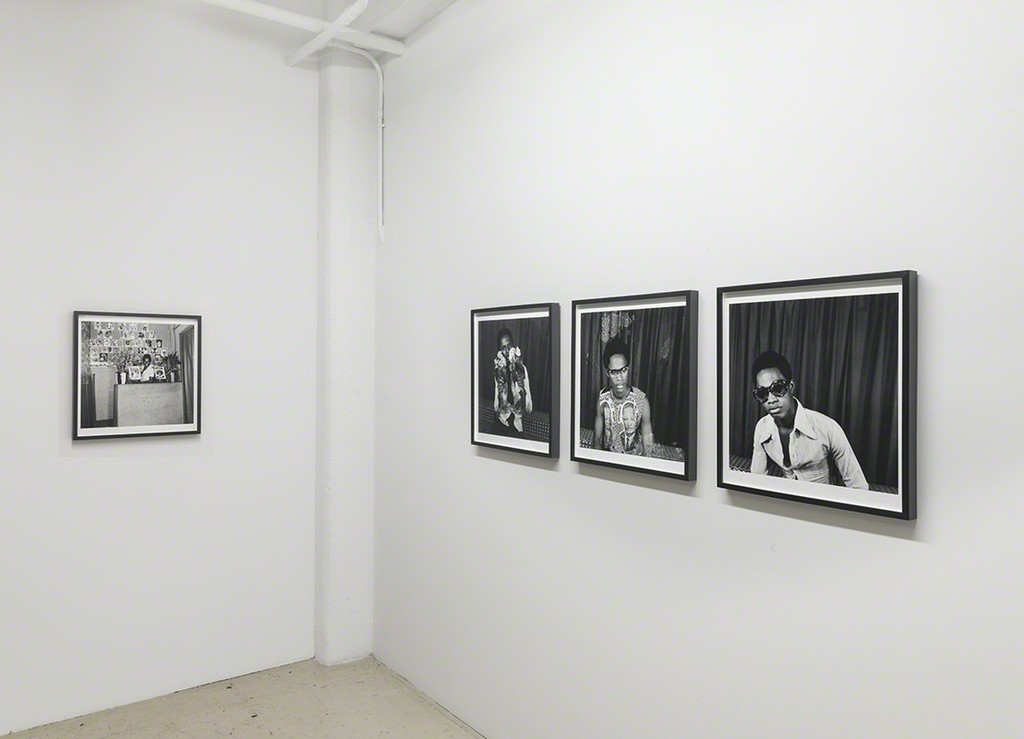 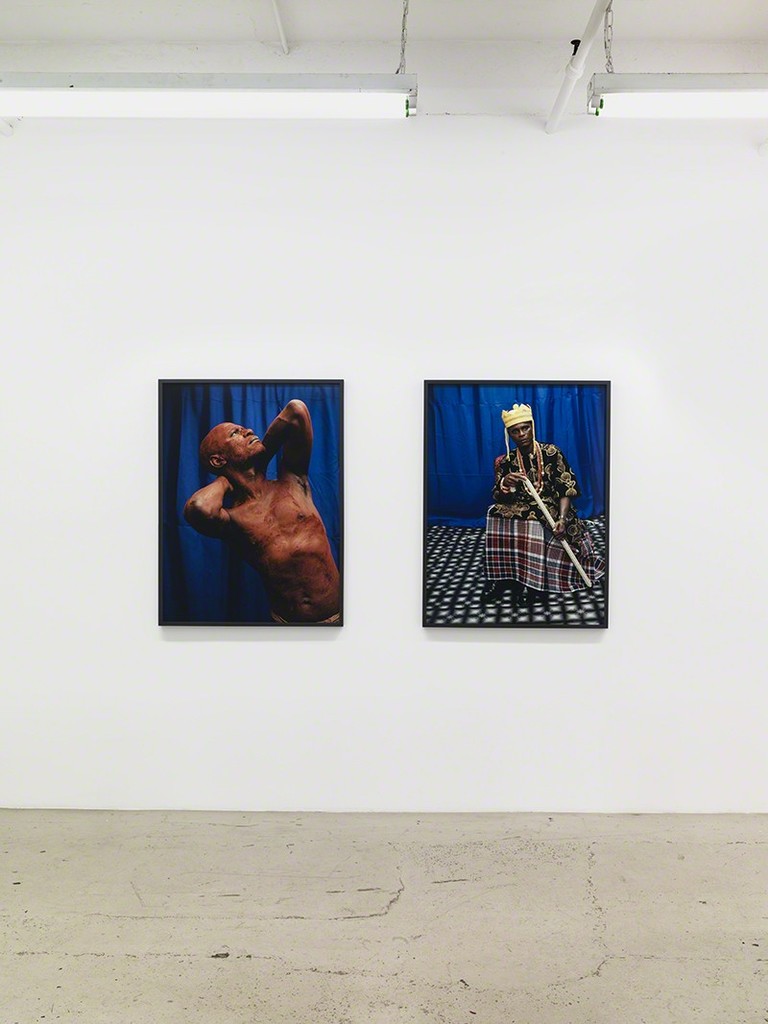 The Walther Collection presents a survey of works by Samuel Fosso, one of the most renowned contemporary artists working in Africa. Since the mid-1970s, Fosso has focused on self-portraiture by transforming his body through performance, envisioning variations on African identity in the post- colonial era. His early experimental photographs and later series create a new imagery opposed to both the ethnographic visions of Africa and the commercial imperatives of studio portraiture. For the first time in the United States, this exhibition brings together Fosso’s work from The Walther Collec- tion, including vintage self-portraits and studio prints with new and recent photographs, featuring selections from his magisterial series African Spirits and The Emperor of Africa.
Samuel Fosso’s photography has consistently reflected upon and commem- orated themes in global visual culture. In 1975, at the age of thirteen, Fosso opened his own studio in Bangui, the capital of the Central African Republic. During the day, he took pictures for paying clients. Examples of his studio work, taken in the late 1970s and mid-1980s, are on view in the library, dis- playing Fosso’s talent for bringing out exuberant poses from his subjects by focusing on their fashion and personal sense of style. At night, however, Fosso turned the camera on himself. His expressive black-and-white self- portraits from the 1970s make reference to popular West African culture— musicians, the latest youth fashions, and political advertising—constituting a sustained and unprecedented photographic project that explores sexual- ity, gender, and African self-representation.
In Tati (1997), his colorful series commissioned by the Paris department store Tati, Fosso assumes such characters as the tribal chief, the golf player, and the “liberated” African American woman, embarking on a signature mas- querade style. Tati shows Fosso’s impulse for satire. Fosso transforms his body, posing against inventive backdrops and donning elaborate costumes. The centerpiece of the Tati series, “Le chef qui a vendu l’Afrique aux colons,” is both an homage to African tribal leadership and a critique of the trappings of power in the age of European colonialism.
Fosso’s photo essays about memory and ritual include Mémoire d’un ami (2000), an elegiac black-and-white reflection on the violent death of a neighbor, and Le rêve de mon Grand Père (2003), in which Fosso performs the role of his grandfather, a traditional healer. In Mémoire d’un ami, Fosso reconstructs a night in 1997 when one of his neighbors was burglarized. Awoken by strange sounds, Fosso got up to help, but as he was dressing he heard a gunshot. Mémoire d’un ami portrays Fosso playing himself. Devoid of costumes or special scenery, he explores his own fear, anger, and loss.
The pantheon of African Independence and Civil Rights icons forms the subject of African Spirits (2008), in which Fosso embodies historical figures from Angela Davis to Patrice Lumumba, Haïlé Sélassié to Martin Luther King, Jr. In African Spirits, Fosso extends the method of his first self-portraits by reenacting historical images drawn from magazines and newspapers. These large-scale, highly theatrical, and often uncanny impersonations not only
honor the figures who fought for Civil Rights and postcolonial freedom, but also display how their mastery of self-styling for the media helped to shape and enforce political ideals. Fosso’s most recent series, The Emperor of Af- rica (2013), extends his protean visions of political and cultural identity by reenacting the iconography of Mao Zedong. The Emperor of Africa is both a reflection on the ubiquitous nature of Mao’s image, as well as an allegory for the increased presence of Chinese economic interests in Africa.
Fosso’s work provides a vivid departure from the traditions of West African studio photography, established in the 1950s and 1960s by Seydou Keïta and Malick Sidibé. His earliest images consider the youthful desires of a postcolonial African society, whereas his series from 1997 to today display an incisive attention to the way photographs move around the globe and shift meaning over time. When compared broadly to the self-portraits of Claude Cahun and Gillian Wearing, who have critiqued representations of gender, as well as Yasumasa Morimura’s impersonations of political and ce- lebrity figures, Fosso’s work covers the range of expressive applications in the medium, from masquerade to archival reference, and expands the con- ceptual practice of self-portraiture.
Samuel Fosso was born in 1962 in Cameroon. Fosso operated his own por- trait studio in Bangui from 1975 to 2014, when his house was looted during the recent conflict in the Central African Republic. His commercial studio archives were partially recovered and his family relocated to Nigeria. Fosso currently lives and works in Bangui and Paris, and he is represented by Jean Marc Patras / Galerie, Paris.
Fosso’s self-portraits have been featured in exhibitions including In/sight: African Photographers, 1940 to the Present (Guggenheim Museum, 1996); The Short Century: Independence and Liberation Movements in Africa, 1945- 1994 (PS1 Contemporary Art Center, 2002); Africa Remix: Contemporary Art of a Continent (Centre Pompidou, 2005), Events of the Self: Portraiture and Social Identity (The Walther Collection, 2010), and Typology, Taxonomy and Seriality: Photography from The Walther Collection (Les Rencontres d’Arles, 2014).