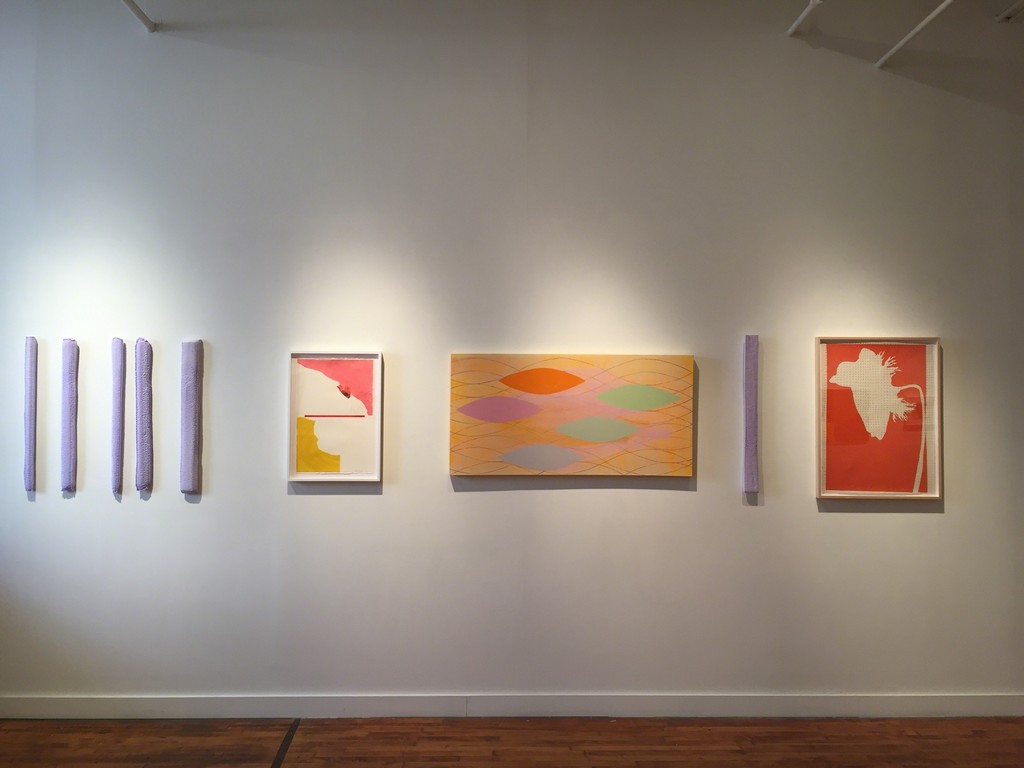 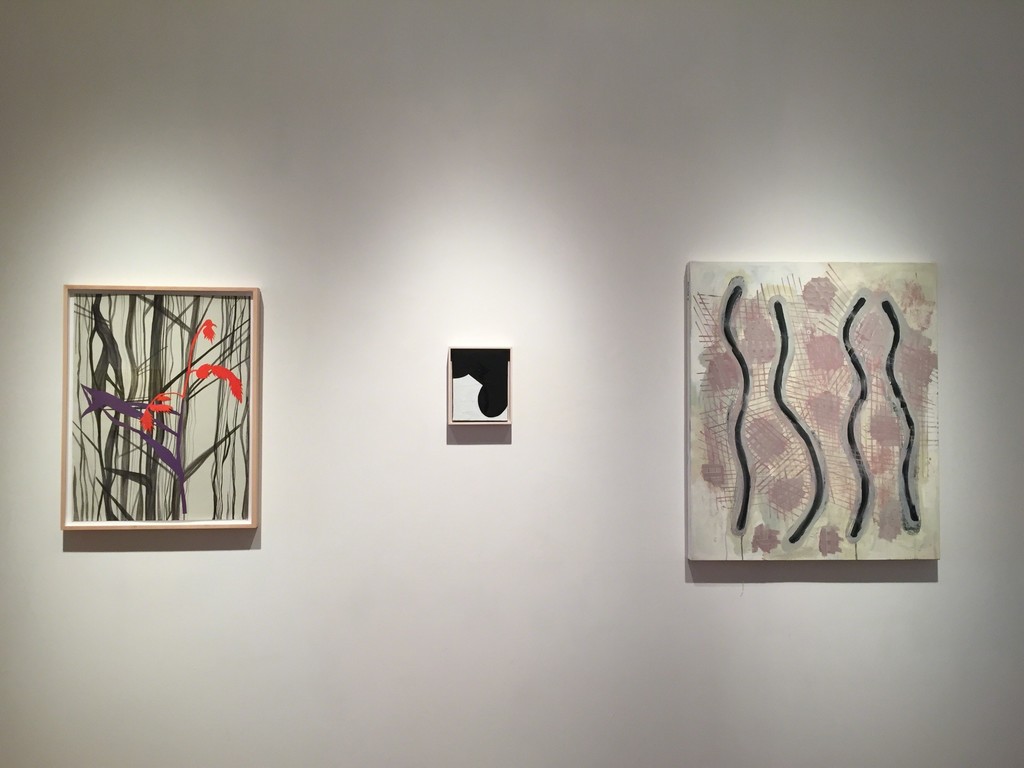 By means of a series of conversation that Emilie Ovaere-Corthay, Director of Galerie Jean Fournier, and Stephanie Theodore had in front of paintings, both in real life and on computer monitors, an idea was born, of a presentation of work of mature painters with strong local followings who each in his/her own way push the practice of painting as a means to an expressive, subjective end. The language of painting transcends national identity and geopolitical boundaries. The concerns of painters –-color, gesture, texture, form, expression–-can suggest heretofore unknown communities among painting practitioners. This exhibition is an attempt to foster further collaboration and dialogue in the circles of painters on two sides of the Atlantic.

Eric Brown (b. New York, NY, 1967) received a BA in studio art from Vassar College. Brown’s small-scale abstractions combine hard-edged rectilinear and curved forms. In his most recent work compositions are reduced to two or three shapes and two or three colors, what he refers to as dyads and chords. His work has been reviewed in Artnews, artcritical, Hyperallergic, and The East Hampton Star. The art critic Raphael Rubinstein wrote "...[Brown] uses his distinctive gift for surprising juxtapositions of color to achieve a sensual conundrum of figure/ground confusion." Brown was a visiting artist/scholar at the American Academy in Rome in 2015 and just concluded a residency at the MacDowell Colony. An exhibition of the artist’s work was presented in 2015 at the Palmer Gallery at Vassar College.

Sharon Butler​ (b. New London,Connecticut,1959) is an American artist and arts writer whose studio practice is based under the Manhattan Bridge in Brooklyn. Often working more than twelve hours a day on various projects, she produces the influential art blogazine Two Coats of Paint, posts daily drawings on Instagram, and paints. Recently, her curiosity has revolved around the discrepancy between the drawings, which she makes in various phone apps, and a series of paintings she has been making based on the digital drawings. Perfection may be possible when drawing geometric shapes and lines digitally, but for Butler the accidents and imperfections that arise in translating the drawings into paint are more compelling.

Jack Davidson (b. Aberdeen, Scotland, 1958) received a BA in drawing and painting from Gray’s School of Art, Robert Gordon’s University, Aberdeen in the early 80’s, and left. After living briefly in London, he spent a decade and a half in New York, USA, and has now lived a similar period of time in Barcelona, Spain, where he has his studio. While in Barcelona, Jack started the alternative art-space, JiM Contemporani, putting on exhibitions of both international and local artists. About his work it has been written that, “Jack ironically sympathizes with already existing images – from record covers to vestiges of his biography – metabolizes them, and then restores them to what is a more open reading, always maintaining a faithful, but never dogmatic, allegiance to the discipline of painting… He propounds a new artificiality that depends on recognition, because images don’t have a mother tongue, but are an adopted language.” Jack exhibits regularly in the United States and in Europe and has been reviewed in the NY Times, Time Out New York and the LA Times, and online in Artcritical, Two Coats of Paint and the Huffington Post. He recently enjoyed a stay at the artists’ residency, Yaddo.

Joyce Robins was represented in Greater New York, MoMA PS1 (2016). She has had over 20 one-person shows of her artwork including a solo exhibition at Theodore:Art in 2014. Describing that exhibition in the New York Times as “invigorating,” Roberta Smith added the sculptures were “... subtly visual and pictorial. They engage, and the more you look, the more you see.” Her work was the subject of a midcareer survey at the Rosenwald-Wolf Gallery of the University of the Arts, Philadelphia in 2013. In addition her work has been seen in gallery and museum exhibitions, including Come Together: Surviving Sandy, Brooklyn (2013), the Biennale International de Vallauris in France; the Neiman Gallery of Columbia University, New York Studio School, Jane Hartsook Gallery, National Academy of Design, Edward Thorp Gallery, Pierogi Gallery and the Lennon Weinberg Gallery (all New York); Rubicon Gallery (Dublin), The Brooklyn Museum, The Gasworks (London), The Delaware Art Museum, Vassar College Art Gallery, Pewabic Pottery (Detroit). Robins’ work has been written about in The New York Times, Hyperallergic, Art in America, Artforum, The Village Voice, The Nation, The New York Observer, The Philadelphia Inquirer and American Ceramics. Phong Bui interviewed Robins on her life and work in the May 2014 issue of the Brooklyn Rail. Jane Kim and Theodore:Art will present a solo exhibition of her work opening September 15 at 33 Orchard Street, New York.

Jostling aside the vocabulary of painting (material, medium and colour) in favour of the uncertainty of gestures and the scars they leave, Dominique De Beir strives to concentrate on the ideas of scratching and scarring, between surface and depth, exploring the physical impact, depth, rhythm. Carrying perforation sometimes to the limit of what the material can withstand, she plays on an inherent ambiguity between composition and destruction, opacity and transparency, stability and fragility. Her work has been exhibited in France, the Netherlands, Italy, Great Britain, and Germany, and her works are included in a number of public and private European collections. The Museum am Oswall in Dortmund, Germany presented her first major solo museum exhibition in 2000. Galerie Jean Fournier, Paris, will present a solo exhibition of her work in September 2016. Dominique De Beir was born in 1964 in France, and lives and works in Paris and Picardie.

Frédérique Lucien​ concentrates on the practice of drawing. She bases her work on line, surface, and the observation of organic shapes. Early in her development, Frédérique Lucien was awarded a residency at the Villa Medicis in Rome in 1991. Lennon, Weinberg featured her work in a three­-person exhibition in 1991 and in two group shows in 1993 and 1995. More recently, after her first retrospective at the Gravelines Museum of drawings and prints made between 1985 and 2002, another retrospective of her drawings, paintings and ceramics traveled to four french museums during 2010-12, including Musée Zadkine (Paris) and Musée des Beaux-art (Caen). Her works have been seen in exhibitions across Europe, including Rotterdam, Paris, Rome, Graz and Budapest, Madrid, and have been acquired for many public and private collections. Her most recent exhibition at Galerie Jean Fournier in Paris in September 2015 in included recent additions to her ongoing investigation of the human body through drawings on paper and works in plaster. A solo exhibition of Lucien’s drawings and sculptures will open October 1 at Galerie Réjane Louin in Locquirec, Brittany. Lucien lives and works in Paris.

Since 1998, Pierre Mabille has made paintings in which he repeats the same shape again and again. The variety and the richness of the possible combination, connected with a playful and precise research gives his works a strong visual impact. He works on paper, canvas and directly upon the wall. Since 2007, his murals and paintings have been exhibited at the Galerie Jean Fournier in Paris, and at the Matisse Museum, where he paid homage to Matisse in the form of a large ephemeral stained glass incorporating Mabille’s shapes. In 2007, he was among the six curators who invited artists in Nantes for “More Reality”, an exhibition connected with new practices in abstraction. Mabille is currently an artist in residence at the Anni and Josef Albers Foundation in Bethany, CT with the support of the City of Nantes and the Institut Français. Pierre Mabille was born in France in 1958.

Christophe Robe's investigations take place on the border between figuration and abstraction. What immediately strikes the viewer is the strangeness of a dreamlike world in which recurring figurative elements – most often vegetal or organic – are juxtaposed with more abstract ones. This intermingling is reflected in recourse to different techniques, as Robe rubs back, washes down and accumulates layer upon painterly layer. Robe’s most recent exhibition took place at galerie Jean Fournier in Paris in december/january 2016 at which occasion a catalog was published. Christophe Robe was born in 1966, and lives and works in Paris.