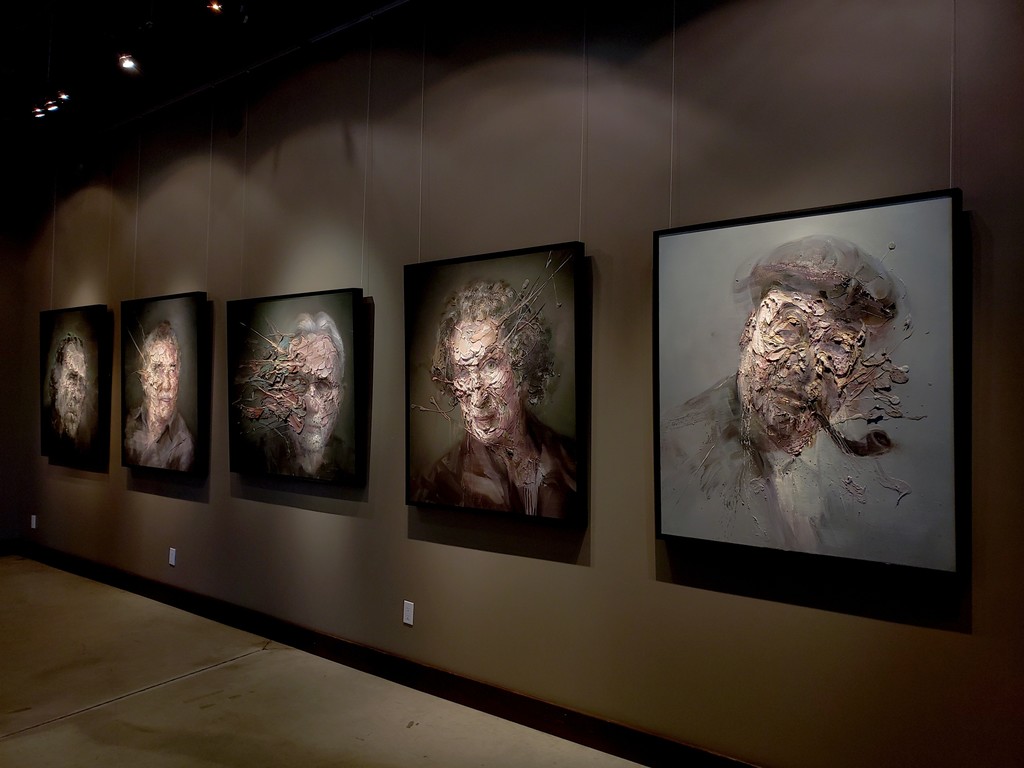 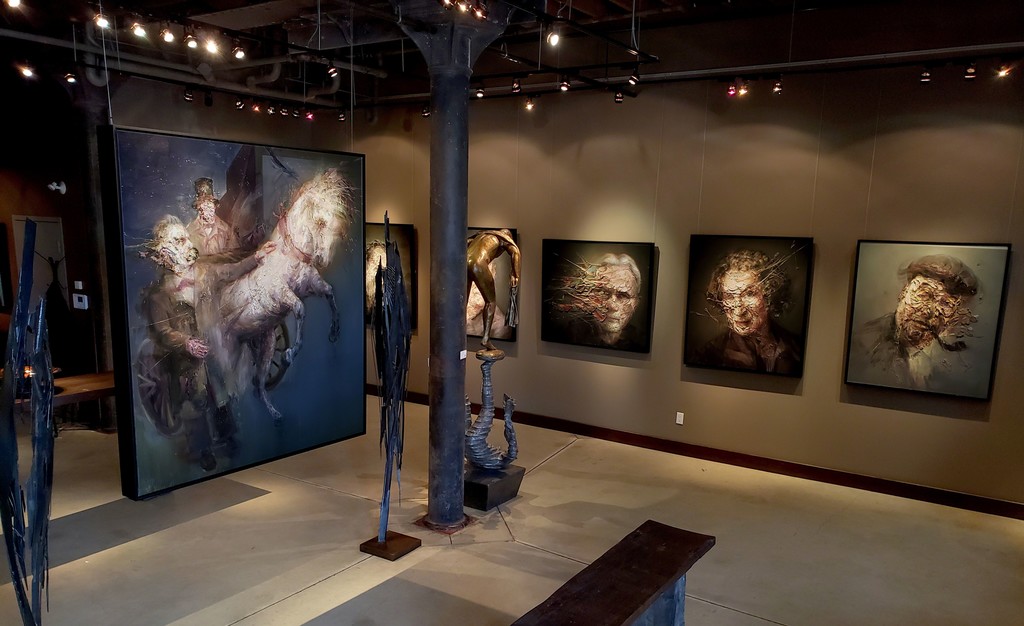 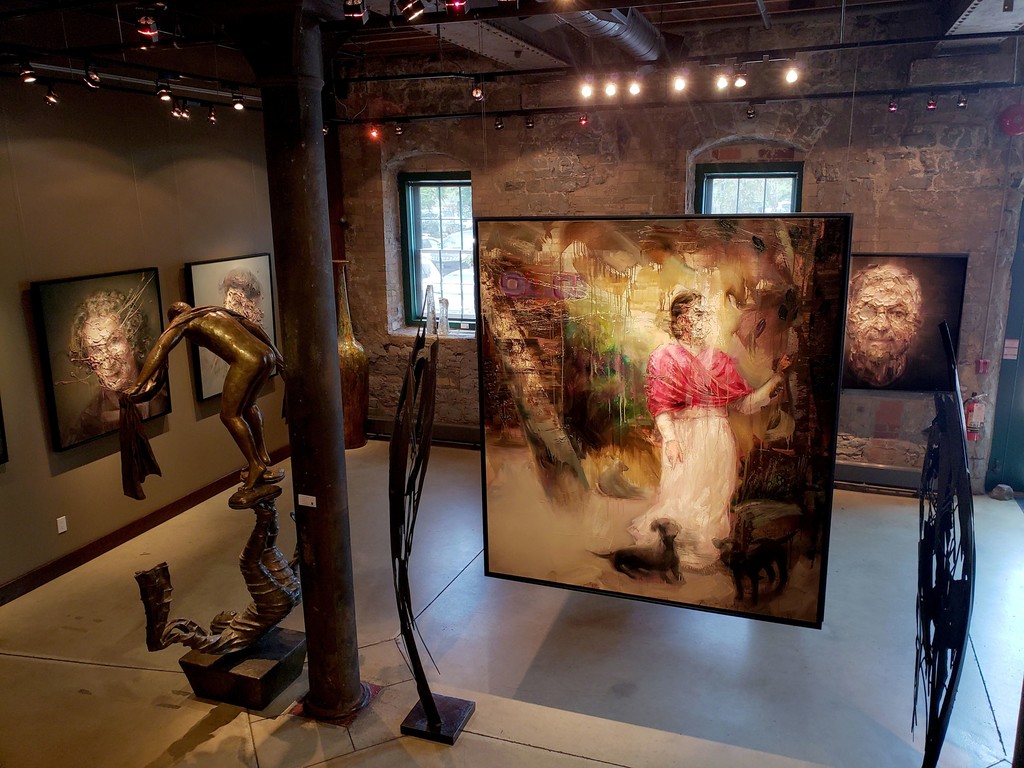 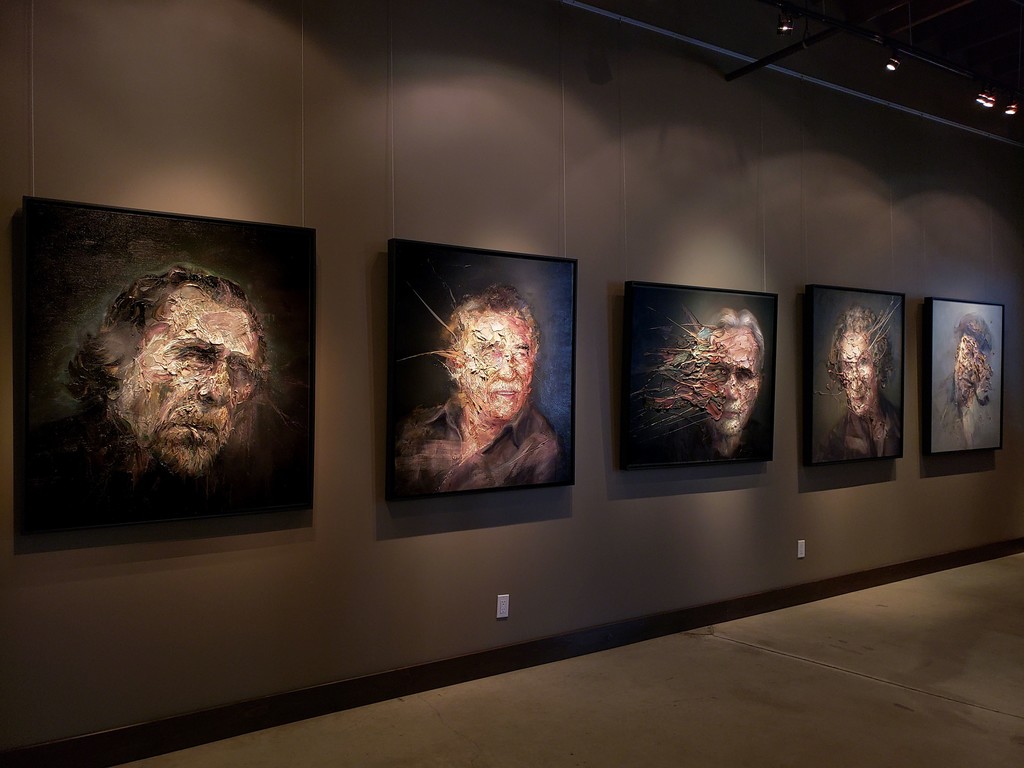 Thompson Landry Gallery is thrilled to introduce the newest artist to our roster, Mathieu Laca, in his debut exhibition Face to Face, running from July 21st – August 12th, 2018 in the Stone Distillery Gallery. Mathieu Laca`s work challenges the genre of portraiture through the manipulation of his chosen medium, oil paint, giving new life to historical figures from Friedrich Nietzsche and Margaret Atwood to John Adams and Guido Molinari. He blurs the line between figuration and abstraction to challenge notions of aesthetic tradition: “I see my paintings as visual tales of a world without constraints.” In this most recent body of work, Face to Face focuses on writers, including Charles Bukowski, Gabriel García Márquez, Michel Tremblay and more.

Mathieu Laca is interested in unconventional portraiture that has little to do with resemblance. He feels that “portraits are the most effective mirrors,” communicating in the most immediate way possible. Laca explains, that as soon as we are born we begin to interact with our surroundings through expressions. This early education allows us to instinctively read the smallest subtleties of a psyche through visual cues. By altering these features, Laca is able to manipulate the narrative of the painting, using “'models' as the characters of a play, by imposing pictorial events worthy of a staging."
Laca evokes historical characters, intellectuals and artists from his personal pantheon. Accumulating black and white photographs of his sources of inspiration, he is allowed the freedom to utilize any colour palette. Using these references, Laca paints his subjects instinctively, based on what he would like to highlight in their personalities, gradually adjusting the colours and textures.

Born in Laval, Quebec in 1982, Laca was a shy student. He jokes that when he was born he was thirty years old, and had to learn to be young later in life. Introduced to art by two of his teachers, Laca describes this introduction as a revelation: “To draw. To paint. At last I could be myself. Pure fantasy.” At the age of 17, his first series of works were exhibited in a professional context at the Maison des Arts in Laval. Several years later, he received the Prix de la culture council of the city of Laval and was selected by Marc Séguin to take part in the collective exhibition “Génération Montréal.” Laca graduated from Concordia University with a Bachelor of Fine Arts in 2005. His works are part of public and private collections in Canada, the United States, Norway, Germany, Spain and Israel.
Mathieu Lacas recent series, Dear Painters, was a tribute to the Quebec painters that have shaped him. Laca finds all painters worthy of admiration, given the stubbornness and sacrifices necessary to devote ones life to painting: “It is a personal testimonial, like letters that I could have addressed to them. The idea was to have a conversation through artwork.” While Mathieu Laca has been inspired by dozens of Quebec artists, once he found his signature style, he stopped searching for a “way” to paint. Beyond the local artists that have influenced him, Laca has always been fascinated with the work of Francis Bacon, specifically, his dissatisfaction with depicting the surface of things and his mission to visualize the core of the human psyche. Thompson Landry Gallery will be showcasing select and exemplar paintings from the Dear Painters series.

His debut exhibition with the Thompson Landry Gallery, Face to Face, shifts from a focus on artists and points the spotlight towards famous authors, including: Margaret Atwood, Michel Tremblay, Gabriel García Márquez, Pablo Neruda, Charles Bukowski and Thomas Mann. Lacas childhood dream was to become a writer; which in his eyes, “appeared as maybe the next best thing after being God.” The intimate experience one has when devouring someone else’s words is something Laca consciously seeks to exemplify in this series. Each author he has chosen to visually interpret carries a special esteem for Laca. Whether its “Charles Bukowski’s gilded gutter life, Margaret Atwood’s coldly plausible dystopias, Gabriel García Márquezs wonderfully brutal magic and Michel Tremblay’s relentless tenderness,” the stylistic prose of each of these icons carry their own seductive effects. The elusive and subjective makings of a great book, and a great author alike, can easily escape us and as such, Lacas aim in Face to Face was to “fiercely tear the veil of the page with flying impasto and splatter.” Additionally, the artist’s textured brushstrokes and wild application add a sense of spontaneity to the cerebral characterization of both writers and portraiture subjects.

The distorted portraiture of Mathieu Laca juxtaposes the real and surreal in a single plane, inviting viewers to dive into the psyche of the subjects portrayed. Face to Face showcases familiar players in visual arts and literature and turns them on their head, creating new narratives and dialogues in a unique exhibition that is not to be missed.