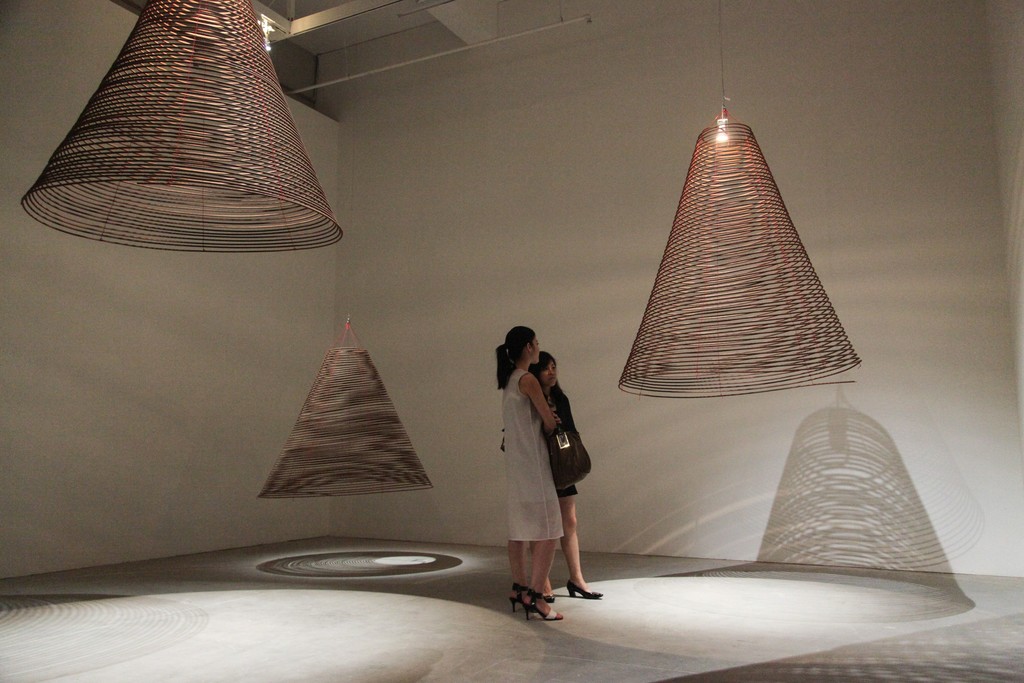 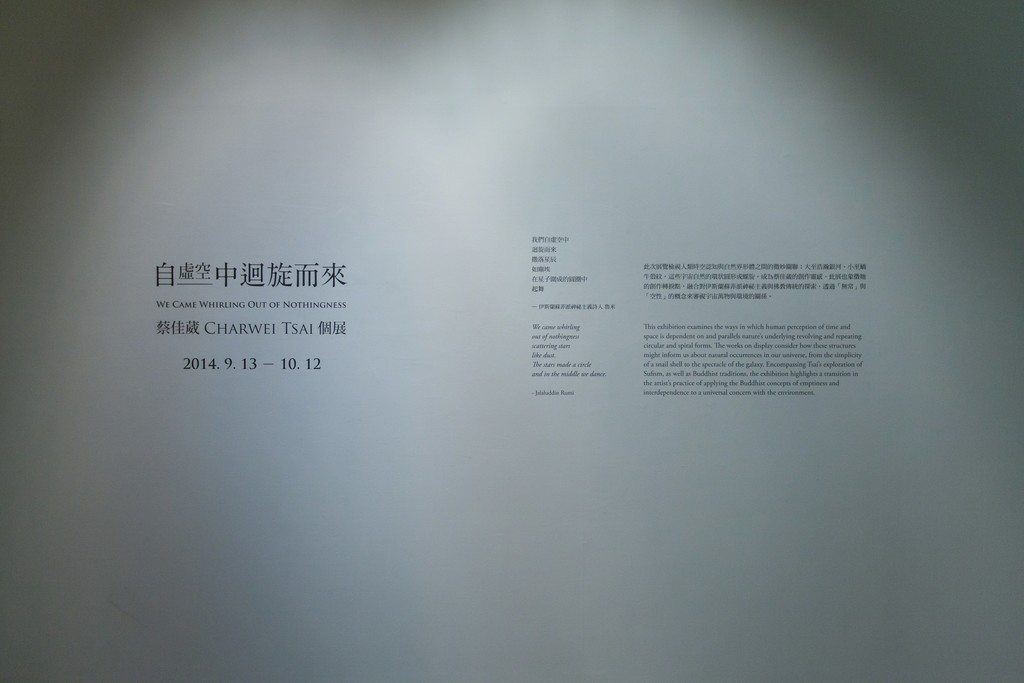 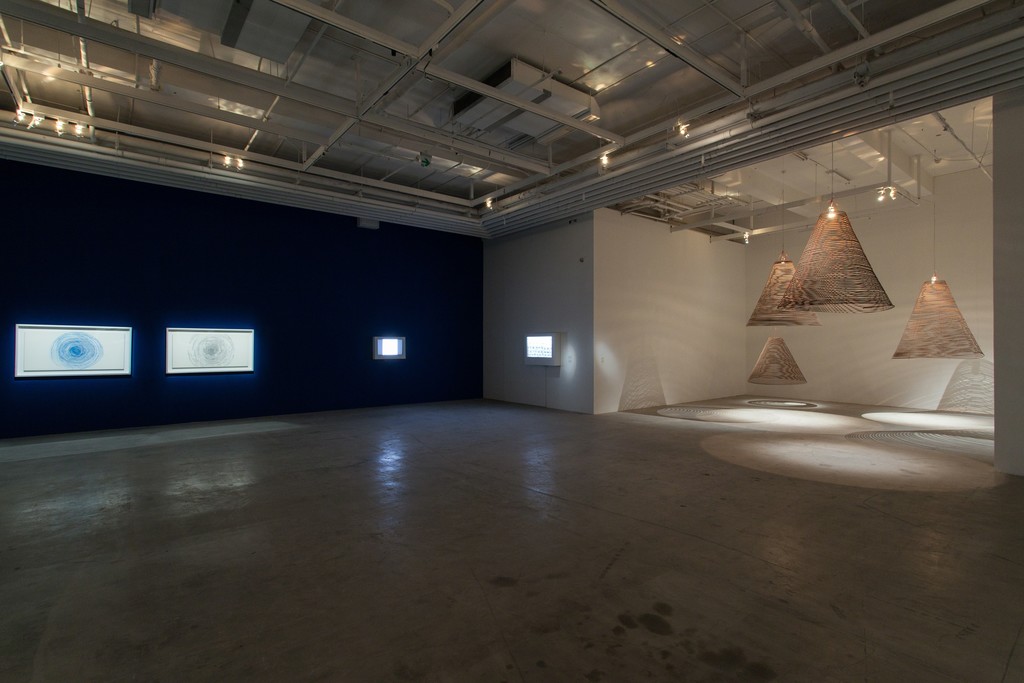 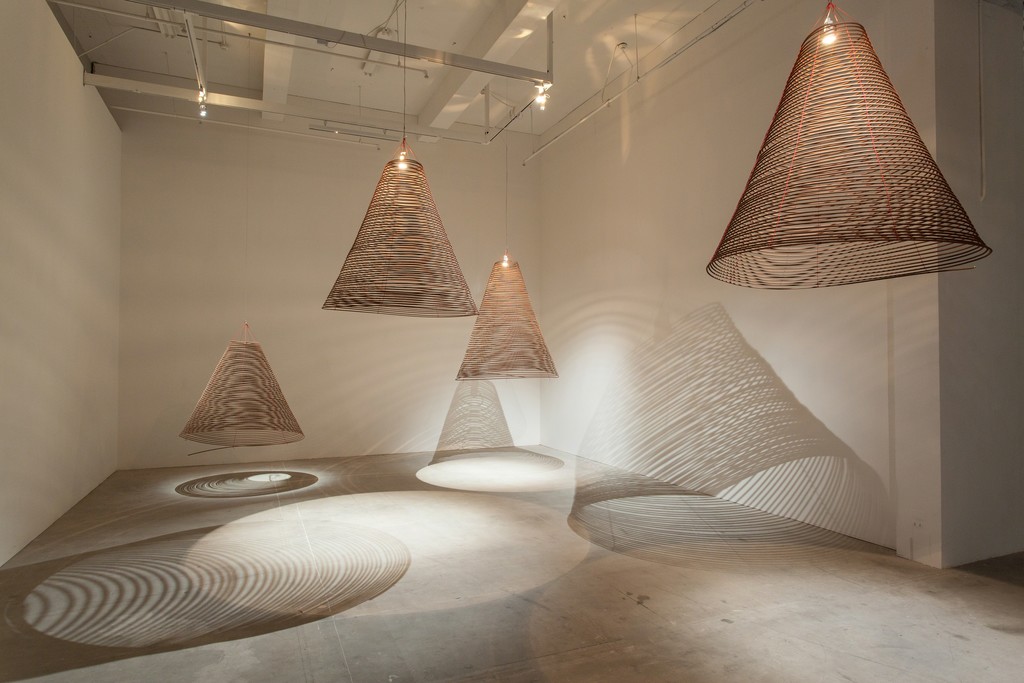 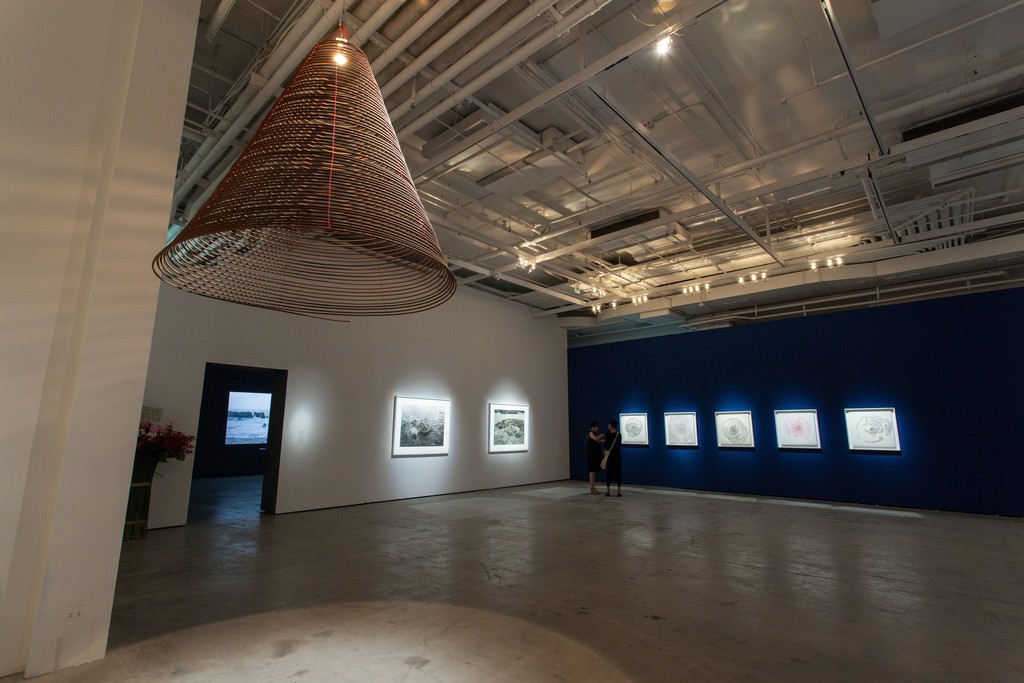 We came whirling
out of nothingness
scattering stars
like dust.
The stars made a circle
and in the middle we dance.

TKG+ is pleased to present Charwei Tsai: We Came Whirling Out of Nothingness. Comprising videos, installations, photographs, and the artist’s curatorial art journal Lovely Daze, this solo exhibition examines the ways in which human perception of time and space is dependent on and parallels nature’s underlying revolving and repeating circular and spiral forms. The works consider how these structures might inform us about natural occurrences in our universe, from the simplicity of a snail shell to the spectacle of the galaxy. Encompassing Tsai’s exploration of Sufism, as well as Buddhist traditions, the exhibition also highlights a transition in the artist’s practice of applying the Buddhist concepts of emptiness and interdependence to a universal concern with the environment.

The centerpiece installation of the exhibition, We Came Whirling Out of Nothingness, a 28-meter-long montage of notes, sketches, drawings, paintings, photographs, and objects, contemplates the spiral form and other circular movements. The work stems from Tsai’s fascination with Sufism, and especially the spirals and circles produced by the spinning of the dervishes during the ritual dance of the Mevlevi Sema Ceremony. According to the 13th-century Persian poet and mystic Jalaluddin Rumi, whose teachings serve as the basis of the Mevlevi Order, the dancing dervishes represent the planets revolving around the sun. Immersed in their microcosms, the dervishes create new worlds and make contact with eternity.

Drawing from a Buddhist perspective, and the artist’s Taiwan-formed traditions, the exhibition also includes works based on the cyclic, rather than linear, understanding of the world. This section includes works that examine the relationships between indigenous beliefs, the spiritual realm, and nature, through a new ephemeral installation of large burning spiral-shaped pieces of incense, Spiral Incense Mantra (2014), the three-channel video projection Lanyu: Three Stories (2012), and two photographs from the series Lanyu (2012).

The exhibition is accompanied by a catalogue that surveys the artist’s practice since 2005, with an essay by Mami Kataoka, Chief Curator of the Mori Art Museum in Tokyo, Japan, and an interview with Tsai by artist, curator, and writer Heman Chong.

Highly personal yet universal concerns spur Tsai’s multi-medium practice. Geographical, social, and spiritual motifs inform her body of work, which encourages viewer participation outside the confines of complacent contemplation. Preoccupied with the human-nature relationship, Tsai meditates on the complexities among cultural beliefs, spirituality, and transience.

Tsai has exhibited internationally, including solo shows in Paris, Bogotá, Sydney, Tokyo, Mumbai, Singapore, Hong Kong, and Taipei, and in group exhibitions and biennials, such as the Sharjah Biennial and Dojima River Biennale (both in 2013), Phantoms of Asia at the Asian Art Museum of San Francisco (2012), the Yokohama Triennale and Ruhrtriennale (both in 2011), the 6th Asia Pacific Triennial (2009), Traces du Sacré at the Centre Pompidou, Paris (2008), Thermocline of Art: New Asian Waves at ZKM Center of Art and Media, Karlsruhe (2007), and the inaugural Singapore Biennale (2006).