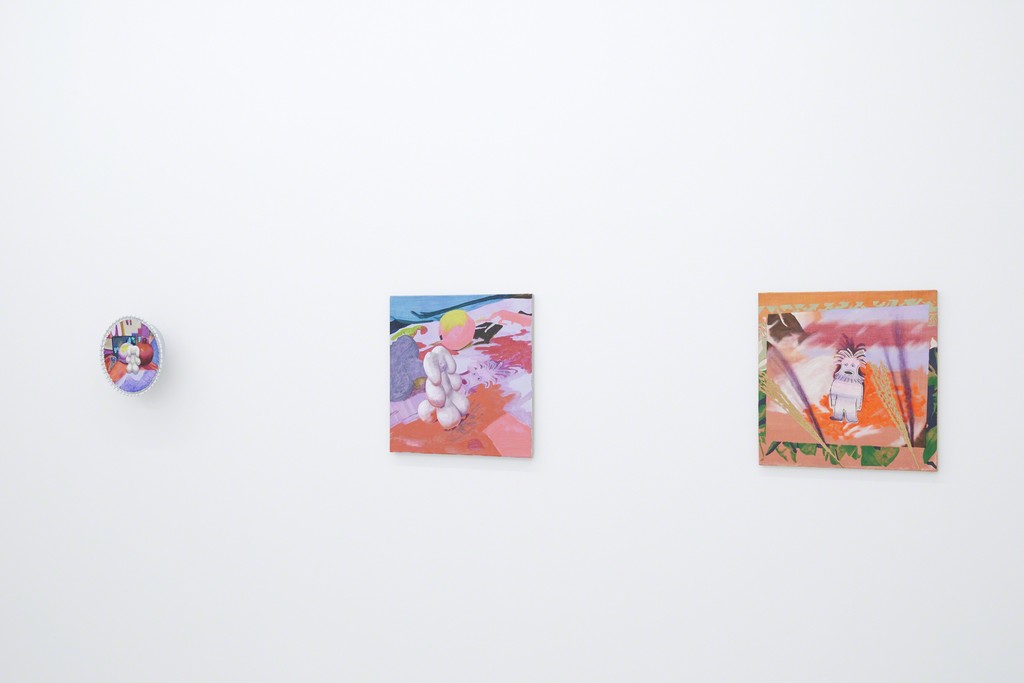 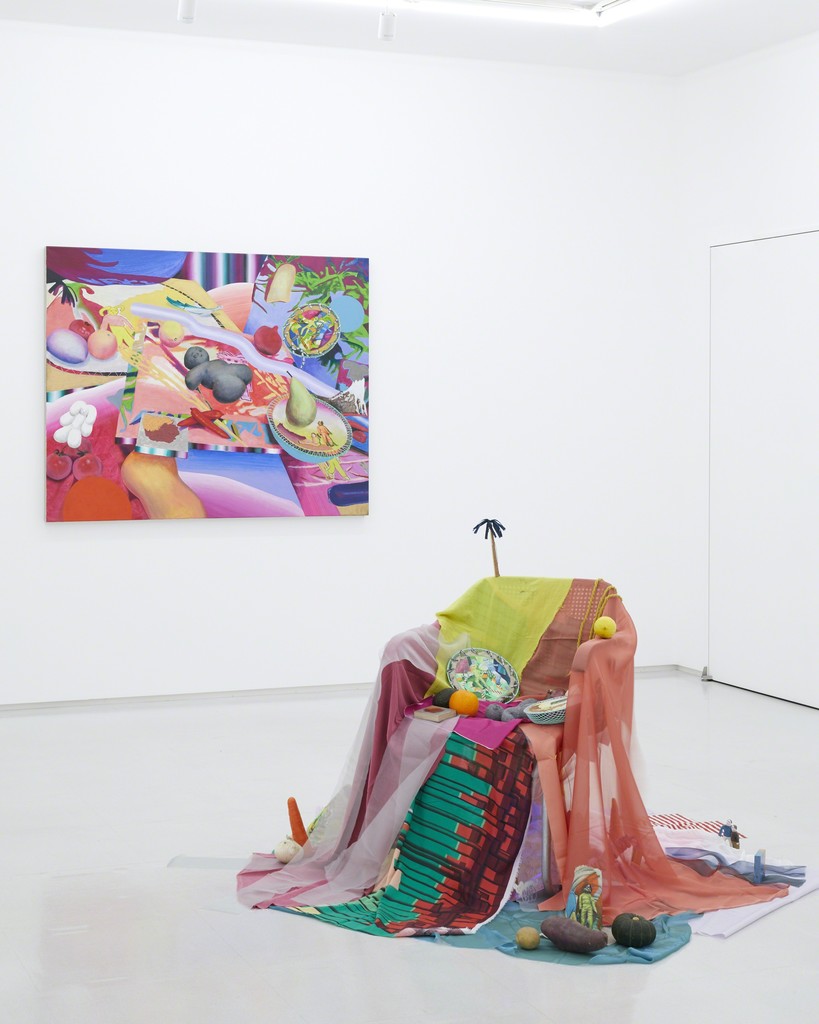 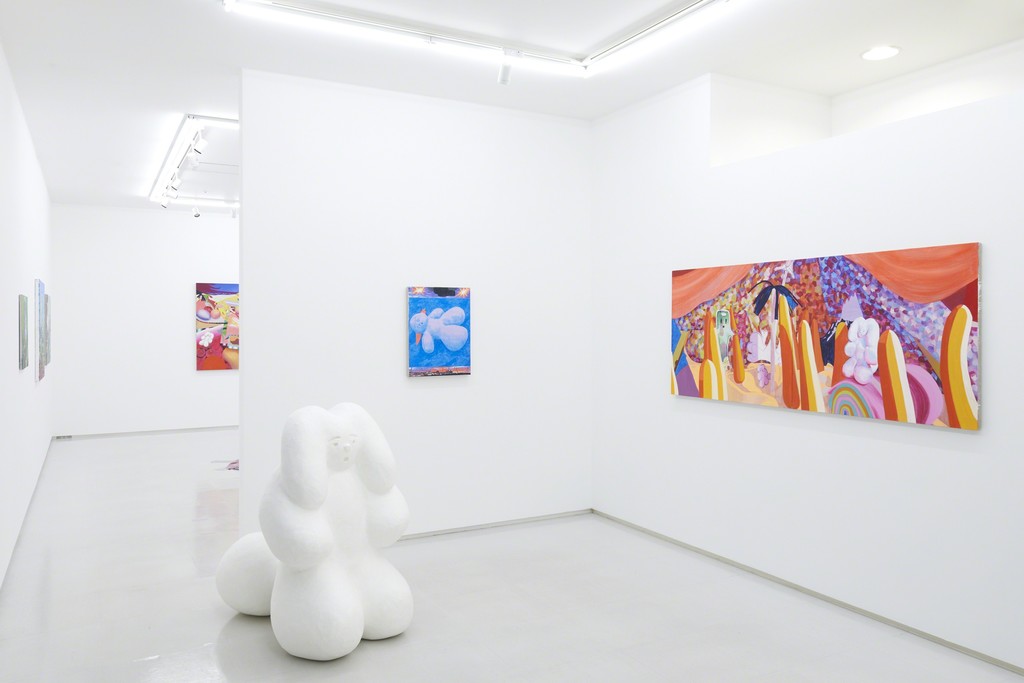 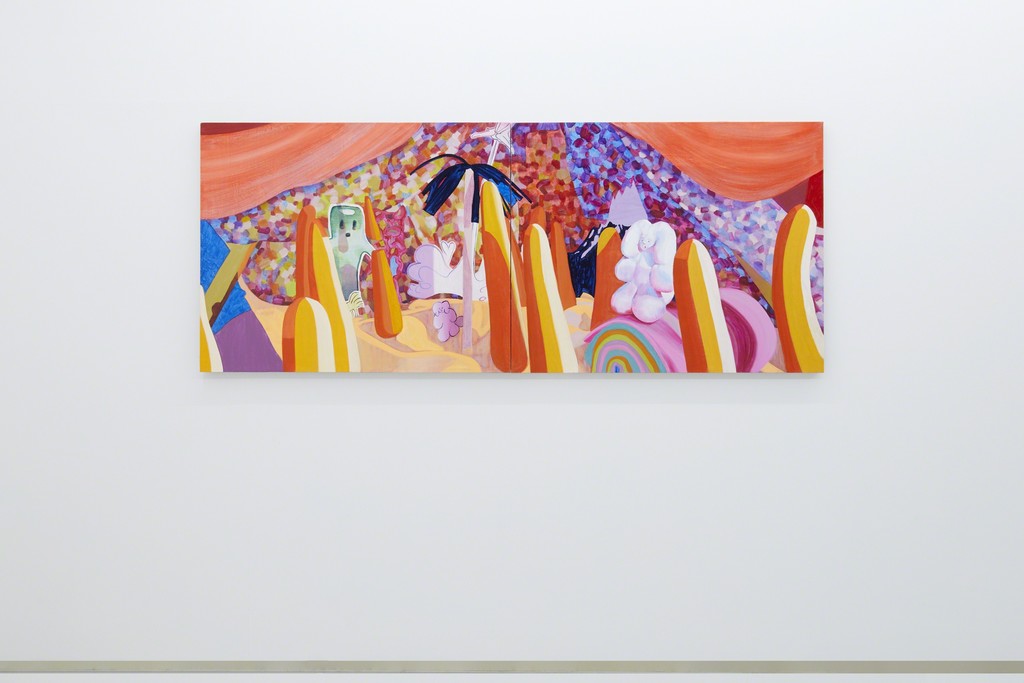 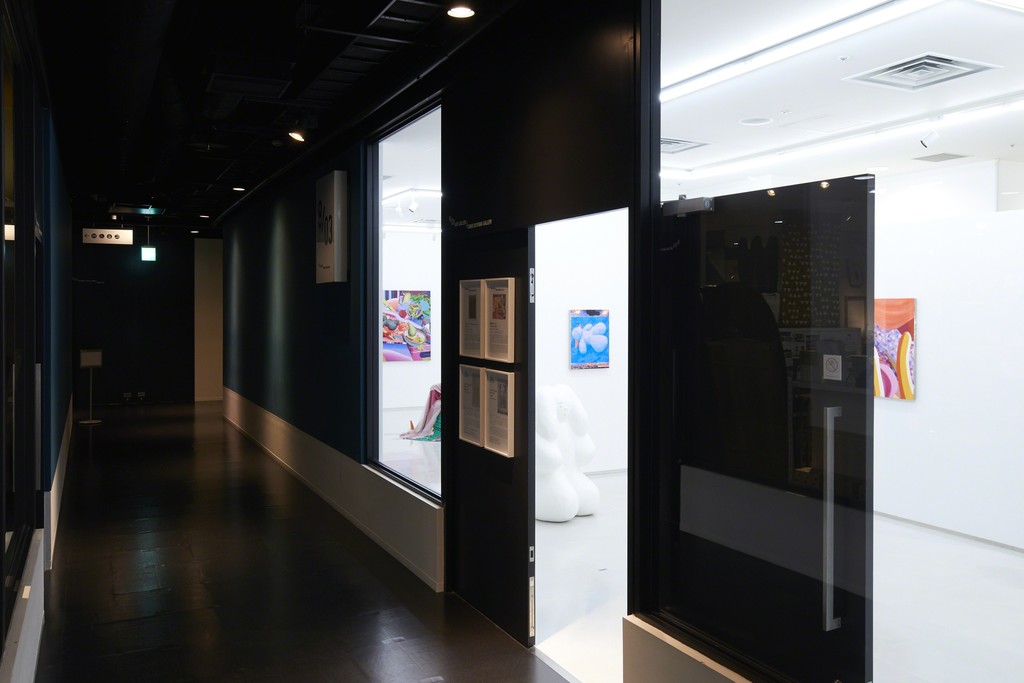 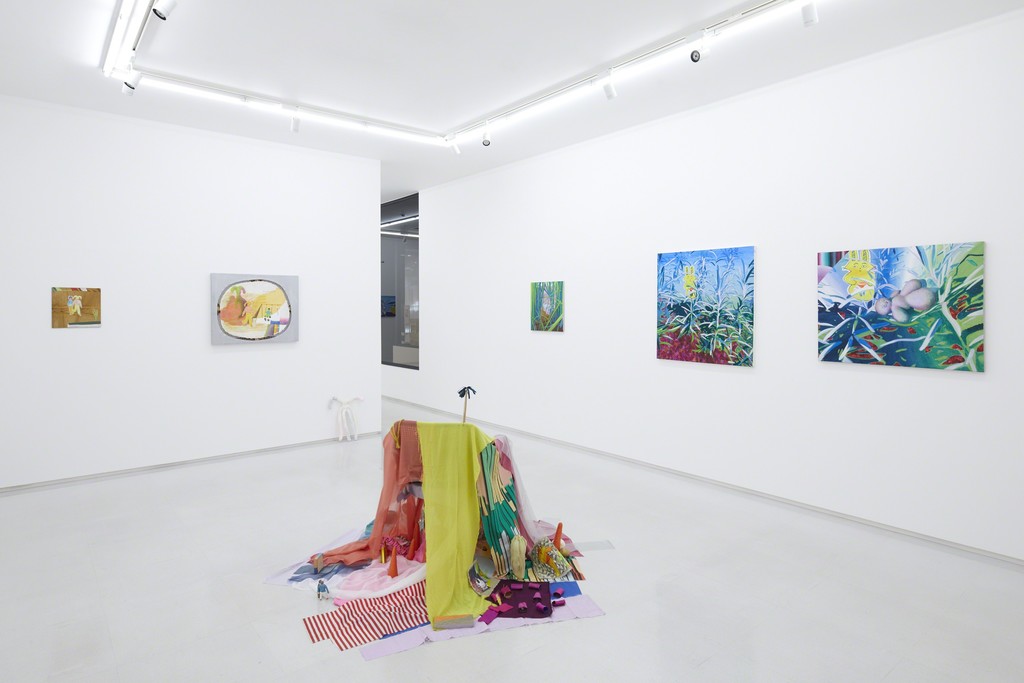 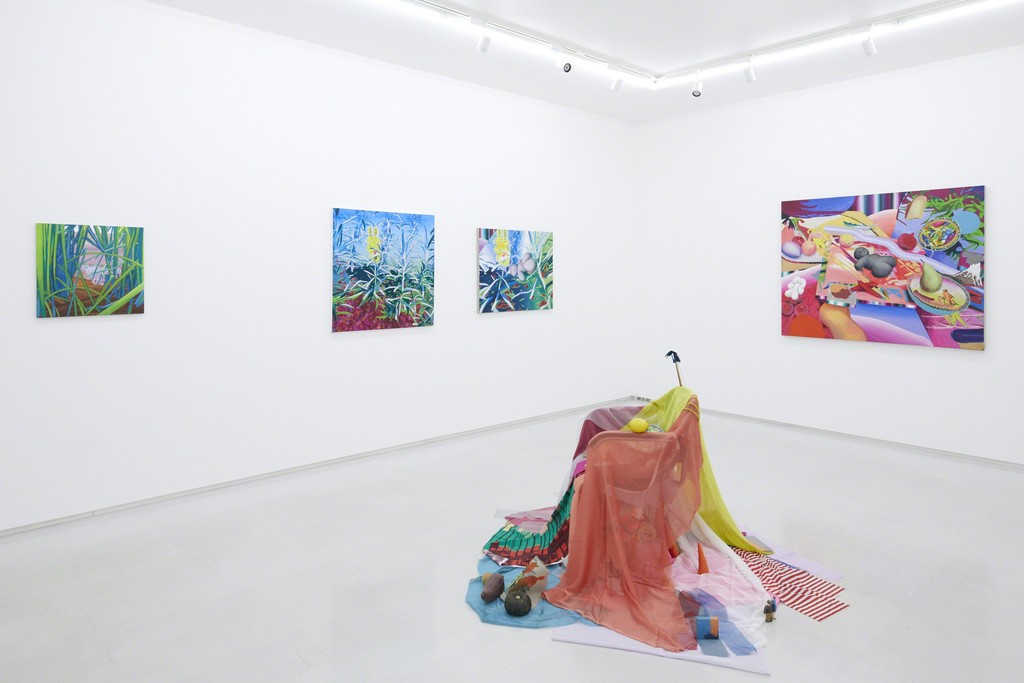 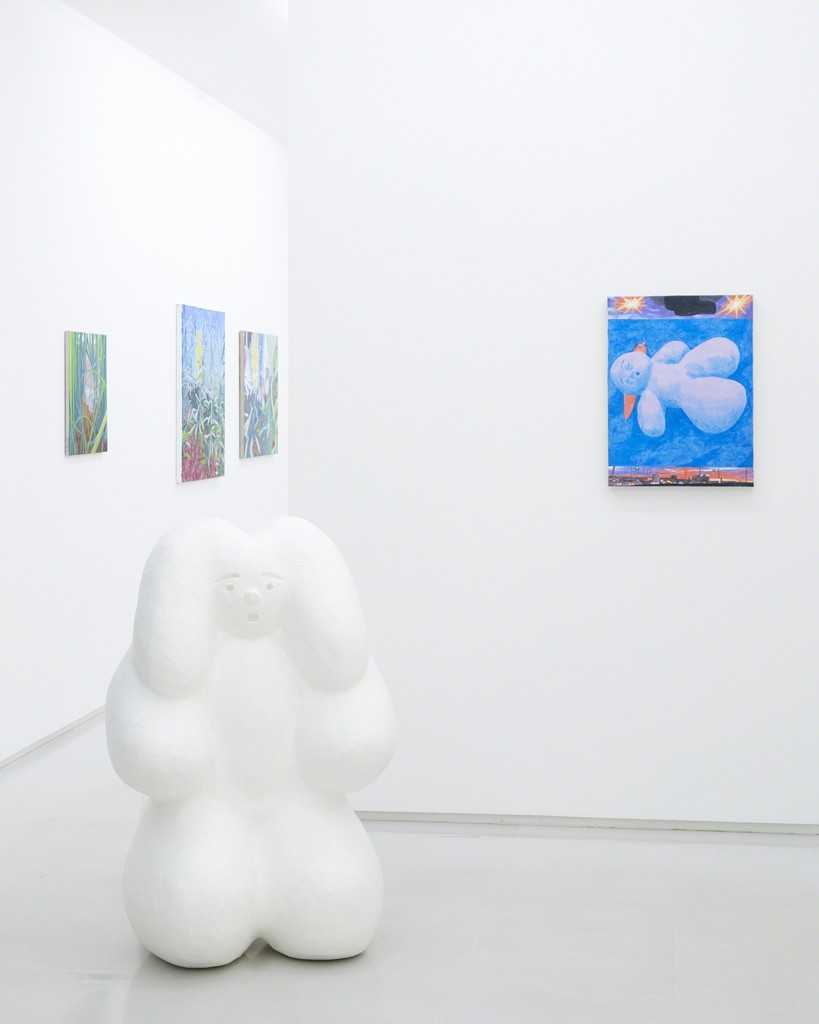 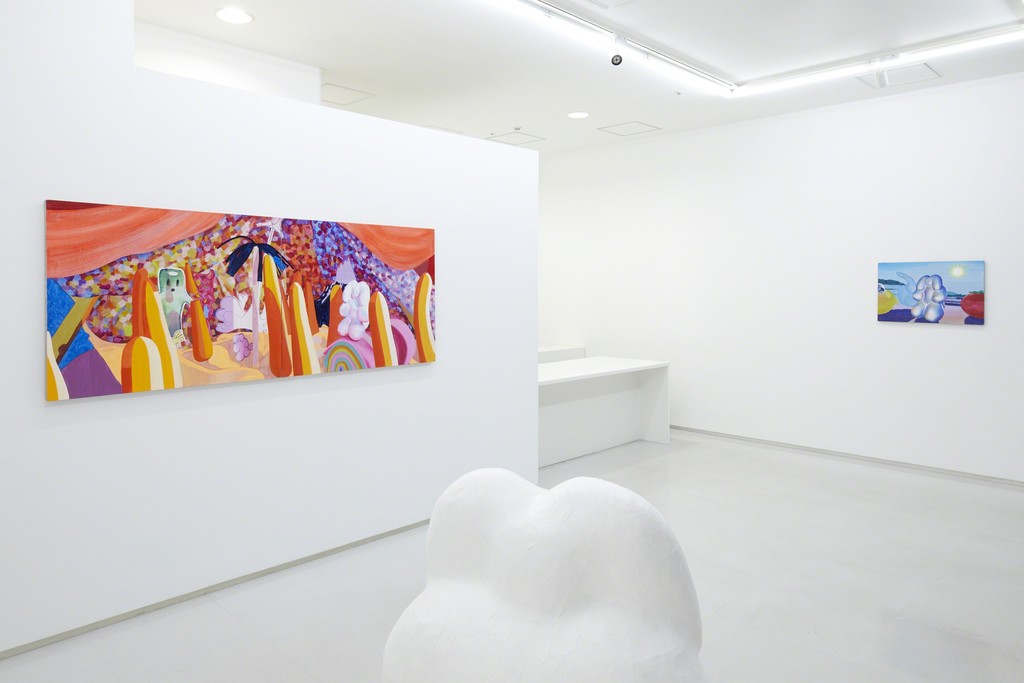 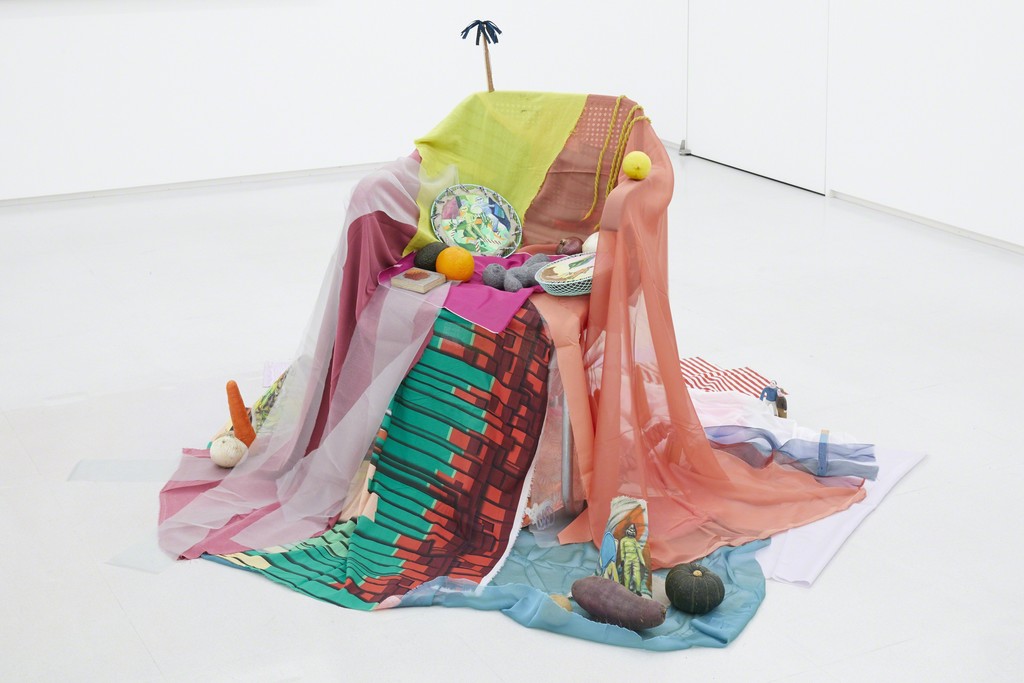 Aya Ito creates paintings with her highly original motifs and process. The work expresses a dangerous humor that addictively attracts the viewer with its vivid sea of color. This exhibition is the first in two years and in addition to new work features work that Ito created during her yearlong stay in Dublin, Ireland.
Ito’s paintings have gone through changes: in addition to a new approach of arranging various motifs in the diorama and painting all images as they are in her mind, Ito has begun using various new motifs. She became fascinated with vegetables while living with and helping a Farmer’s family in Ireland. Her daily life and artistic practice became closely related naturally, perhaps, in part due to the fact that her family works with mandarin oranges. Ito started putting more emphasis on “how to deal with work” rather than which themes to use to create work, and began taking time to lie down and “talk” with each motif and drawing. The exhibition title Sleeping Stone suggests the dialogues in which she delves into the inner workings of herself, by going deep she is able to see a new horizon, and bring fresh encounters.

Aya Ito was born in Arida-city, Wakayama in 1987. She received MFA from Department of Painting, Graduate School of Art, Kyoto City University of Arts. She lives and works in Ireland. Ito received the Suntory award at “Art Camp in Kunst-Bau 2007” (Suntory Museum, Osaka), the Shu Uemura Prize and the Judge’s Prize (Yuko Hasegawa) at “Art Award Tokyo Marunouchi 2011”. Her major group exhibitions include “VOCA 2010” (The Ueno Royal Museum, Tokyo, 2010), and “RESONANCE” (Suntory Museum, Osaka, 2010), "Really Realistic Reality" (The Museum of Modern Art, Wakayama, 2015). She has recently presented work at “AYA ITO & ATSUSHI KAGA IT HAPPENS TO BE” (Pallas Projects/Studios, Ireland) in July 2017. She is currently presenting her works at "Rokko Meets Art 2017” in Hyogo.