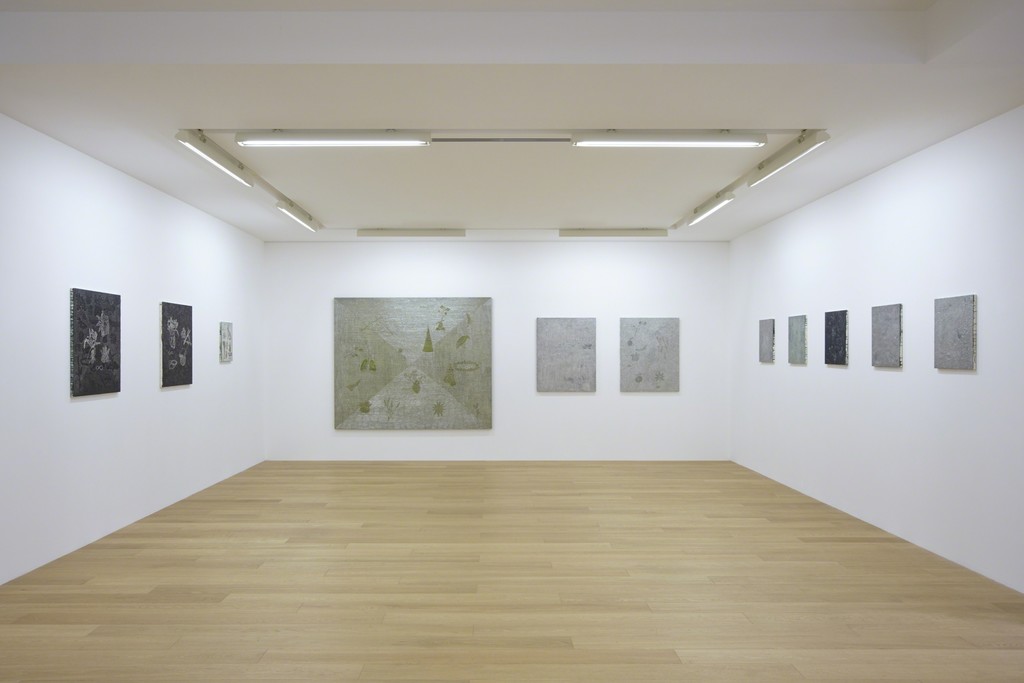 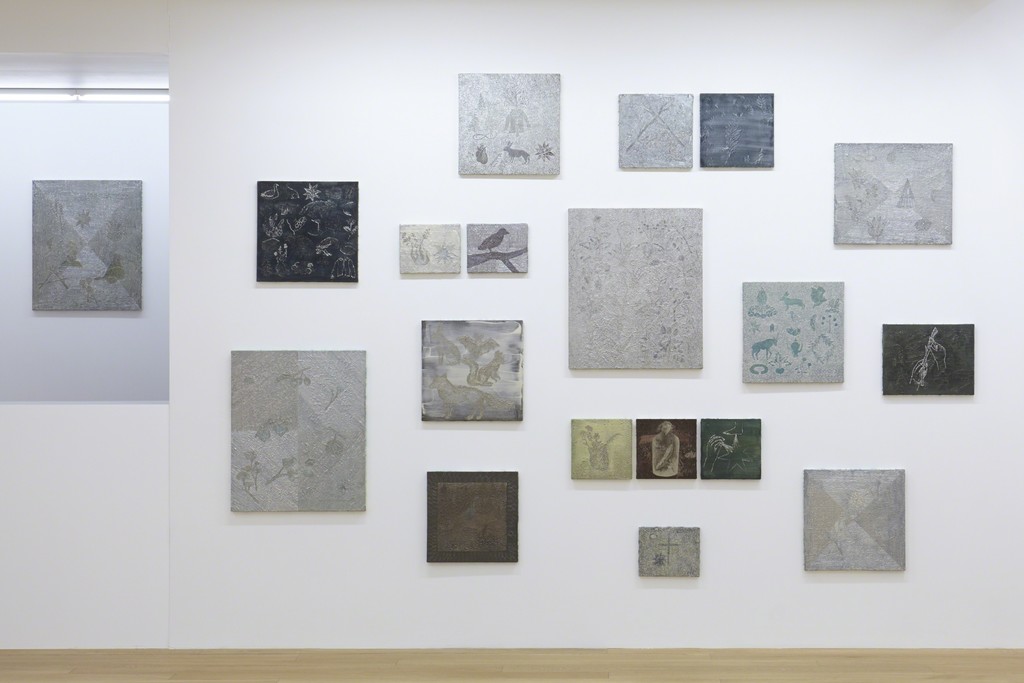 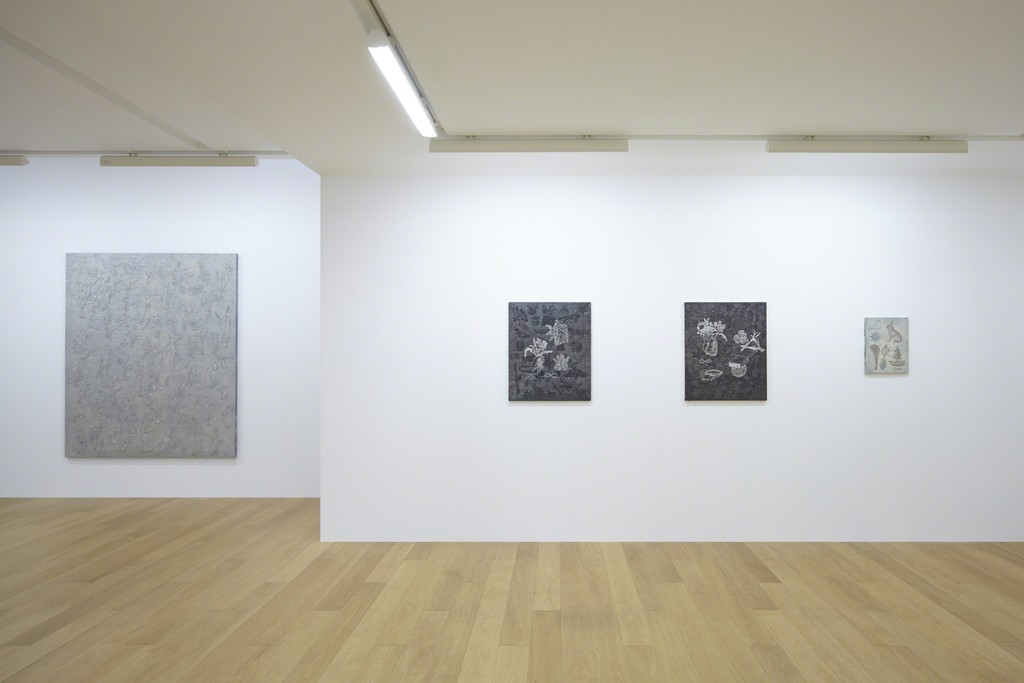 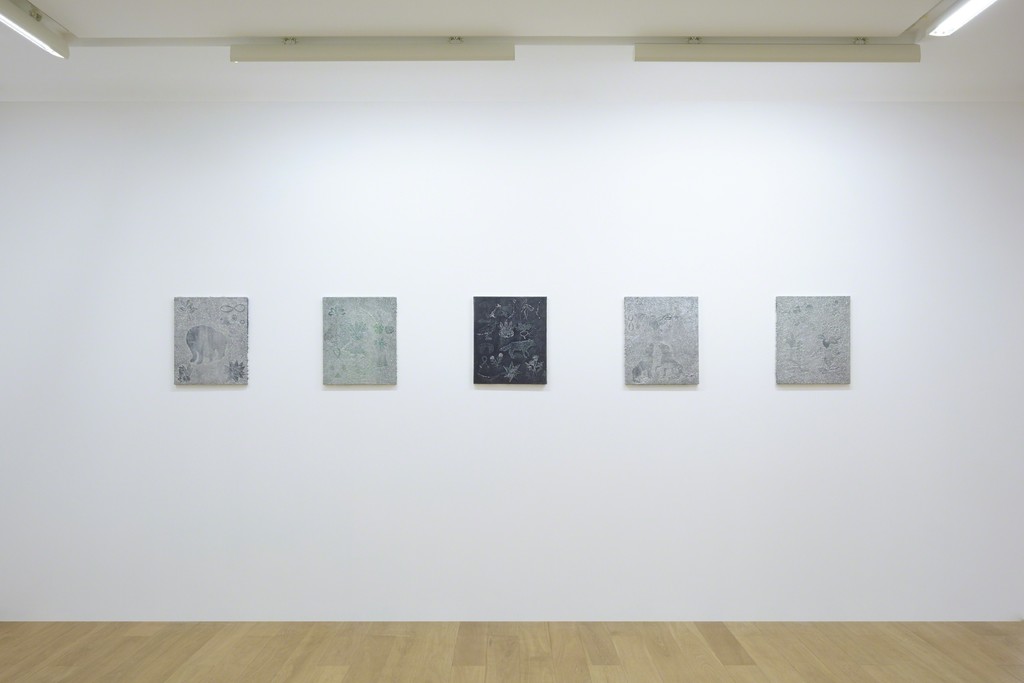 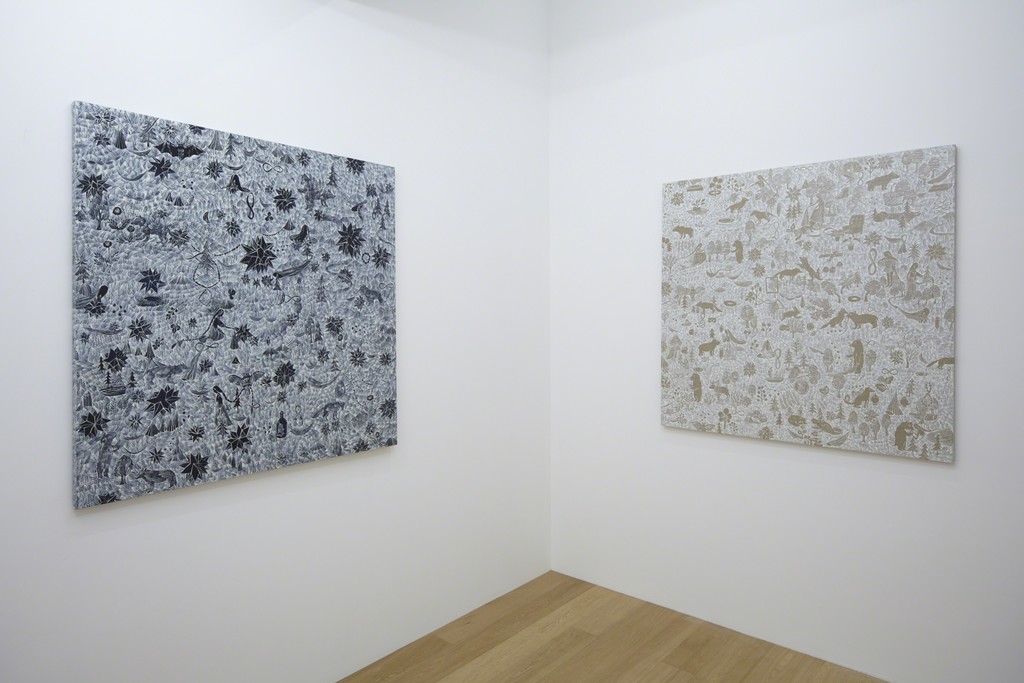 Nana Funo weaves her motifs from such as animals, people, landscapes and good luck charms that appear in stories and myths in which she has indulged since her childhood, into richly nuanced and layered, yet clear matière with a variety of touches.
Visual effects of Funo’s layered pictorial space – meticulous brushstrokes of acrylic paint with a depth that recalls pointillism or textiles woven stitch by stitch; a glossiness almost like that of ceramic resulting from layering clear gesso and gel media; and patterns which flow by a technique of masking – all of which embrace “a spatial complexity that cannot be captured in an expression of space in which images float or overlap.” (Mitsue Nagaya, “VOCA 2009” catalogue)

Of this new work, Funo remarks that she departed from the serious, sometimes almost tense, atmosphere that she had pursued with her previous works – paintings of great size and impact, motifs repeated as elaborately as a never-ending kaleidoscope – and is moving toward expressions with modest and sensuous imagery. She searched for something within her deepest self and used an introverted form of expression to “stay inside of her own world”. Yet as this attitude almost caused emotional instability, she started taking time to look at her work and herself more objectively, experimenting with “subtraction” rather than “addition”.

“Many of my new works have incoherent motifs. I connect them with lines in my eyes, move my eyes to make a constellation, and give a name to it. I adhere to meaningless things, find values in them, or pick them up softly. Giving a name is one of the important aspects within that.” – Nana Funo

As the exhibition title Connecting with Lines and Giving a Name suggests, in Funo’s new work the motifs antagonize each other delicately, pair up and then part from each other, playfully inviting the viewers’ imagination.
On a technical level she also employs experiments. Before, she layered matière with intention for a next step based on careful contemplation of meanings. In the new work, she simply follows her own sensations in using her media, enjoying the unexpected expressions brought by uncontrolled force; she adds color onto clear gesso roughly applied by a brush and scrapes it away afterwards,; she stops painting when her eyes are “pleased”, or she repaints the entire piece after painting it.
Funo continues to draw daily in her drawing notebook, which has been a source of images since the beginning of her artistic career. It has become a receptacle of her motivations and any motifs she wishes to depict. As she mentions that she “becomes intimate with motifs as I keep drawing them”, the drawing notebook also plays a role as an implicit energy for the beguiling development of her tableaux.