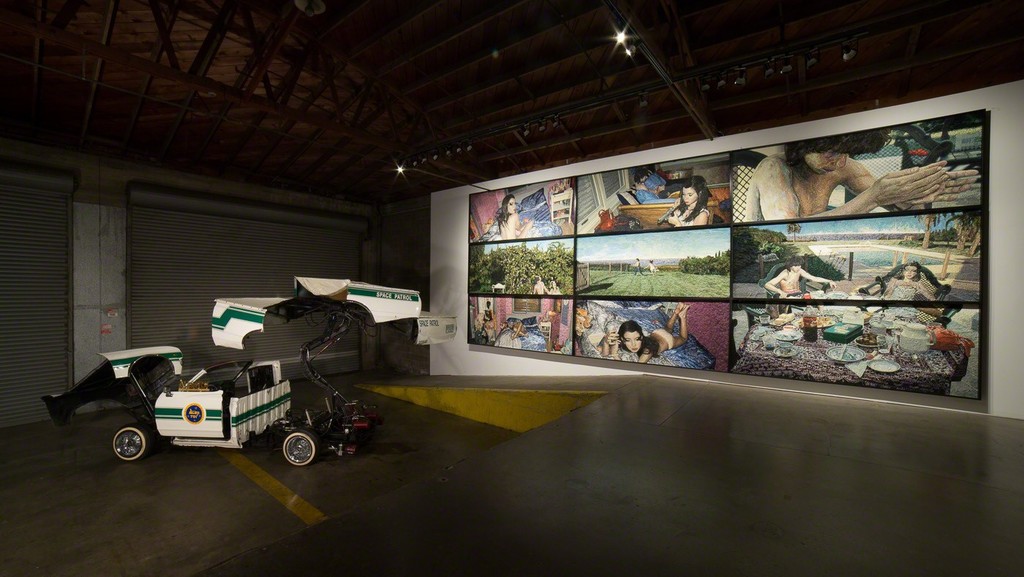 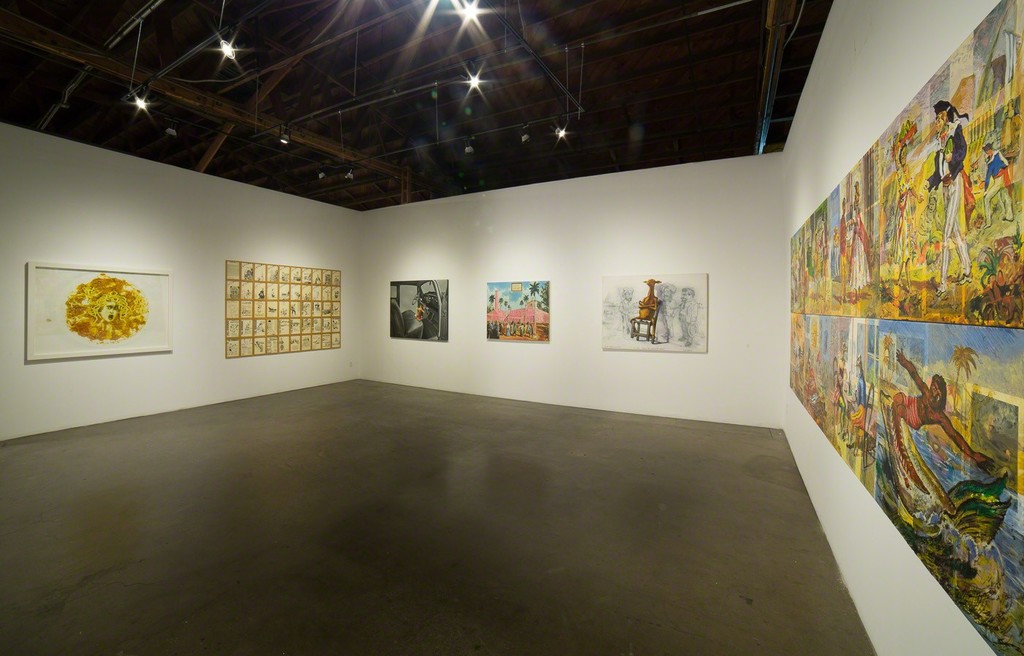 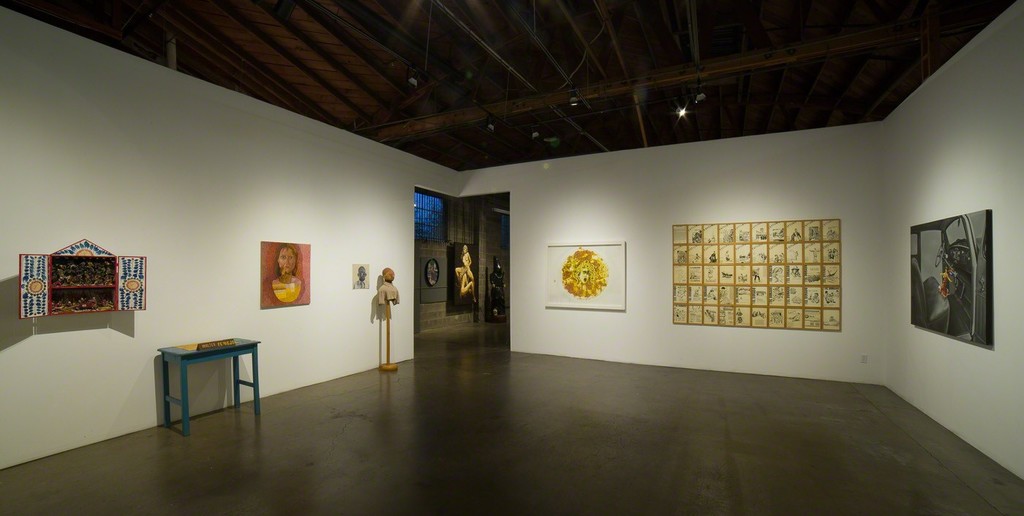 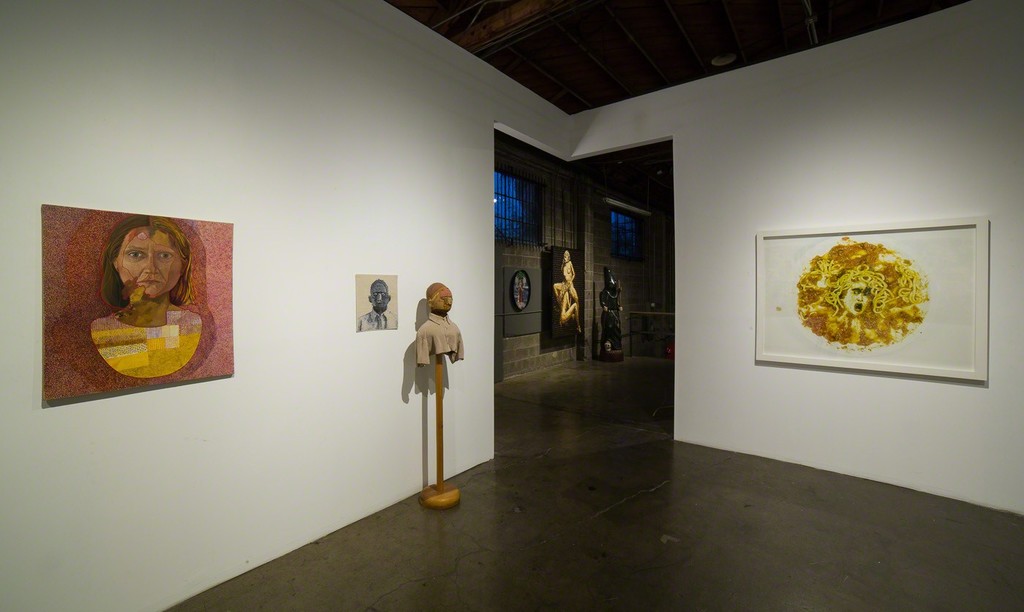 About the ARTISTS included in TESOROS:
Mondongo (Argentina), a collective formed in 1999, constructs intricate and beautiful “paintings” without paint, using instead a variety of “popular” materials, including plasticine, thread, wire, nails, and cookies. To see them is to believe in them. In a word, amazing.

The work of Mexican artist Mónica Castillo explores the genre of self-portraiture from an informed and deviant point of view – in fact, she severs and examines the self-portrait—a mode cultified by the Frida Kahlo craze—from its convenient and voyeuristic biographical meanings.

The paintings of Douglas Pérez (Cuba) comment on such subjects as colonialism, race, and history from his unique perspective. Framed by the “Periodo Especial”—the period of economic and political upheaval that has followed the failure of perestroika—his work emerges from the unique ambiguity, complexity, energy, and desperation that characterize daily life in Cuba.

Fernando Bryce's series of 50 drawings, Turismo El Dorado illustrates the commerce of Peru (and therefor, its social life) as shown in advertising. In Bryce's work the social always intervenes - - its purpose being both critical and ethical with a subtly shifting focus. Fernando Bryce studied art at both the Universidad Católica in Lima, the Université Paris in Paris, and for two years with Christian Boltanski at the Beaux-Arts in Paris.

The large-scale photographs of Milagros de la Torre (Peru) document objects and institutional archives, eliciting feelings of both nostalgia and melancholy. The work on view is one of personal effects left behind in a long-ago Peruvian orphanage.

Cuban painter Pedro Álvarez sets up a space in which disparate images come together to create a new interwoven interpretation. He chooses reproductions (pages) of artworks from catalogues and books, lays them on canvas, then paints over them using transparent pigments. The History of Cuban Painting Has Now Been Told, a ten-panel work, is also a history of Cuba itself.

Saidel Brito is another gifted painter from Cuba with a wry, satirical bent. El Tibiri-Tabara Del Pensamiento features a goat in a chair who is being assigned blame for all that is wrong. Indeed, a scapegoat.

Rubén Ortiz Torres (Mexico) works in all mediums – photography, painting, and sculpture to show the cross-fertilization of American and Mexican life, particularly in the towns bordering Mexico and Southern California. His amazing Alien Toy, is an actual Datsun pickup truck with Border Patrol markings that he has turned into a low-rider vehicle that can rise and fall, and whose doors and hood can be sent spinning by remote control.

“Cultural collage” might best describe the work of Eduardo Abaroa (Mexico) who uses everyday objects like cotton swabs, plastic bags, bread, mirrors, and costume jewelry to make playful and at times grotesque sculptures waiting to be deciphered -- appearing benign, even cute, at first glance, only to reveal a more perverse nature.

Vik Muniz (Brazil) might be billed as a photographer, and photographs are generally the end product of his work. But before the photo, the subject is relieved of its original function. In Medusa, for example, the contents of a can of Franco American Spaghetti, becomes the portrait of a long-haired person in distress. The end product is a document of the portrait.

Cisco Jiménez (Mexico) is a product of both the Instituto Nacional de Bellas Artes in Cuernavaca, and the Art Students League in New York. Drawing upon the tradition of Mexican popular art which utilizes text as an educational, political, religious or commercial element, Jiménez creates his own icons, naming his paintings with humorous neologisms. A small, rudimentary table from a thrift shop serves as the desk of a man described on his nameplate, Walter Pendejo.

Nicario Jiménez (Peru) makes traditional Andean altarpieces, small wooden boxes filled with figures, animals and other objects that tell a story, usually religious. Jimenez, though, tells stories tinged with the struggles of his people, the destruction of the rain forest, teachers’ strikes, and the Conquering by Cortez. His altarpiece figures are made by hand with a mix of boiled potato and gypsum powder. His work has appeared in major museum exhibitions, including the Smithsonian Institution, where they are a part of the permanent collection.