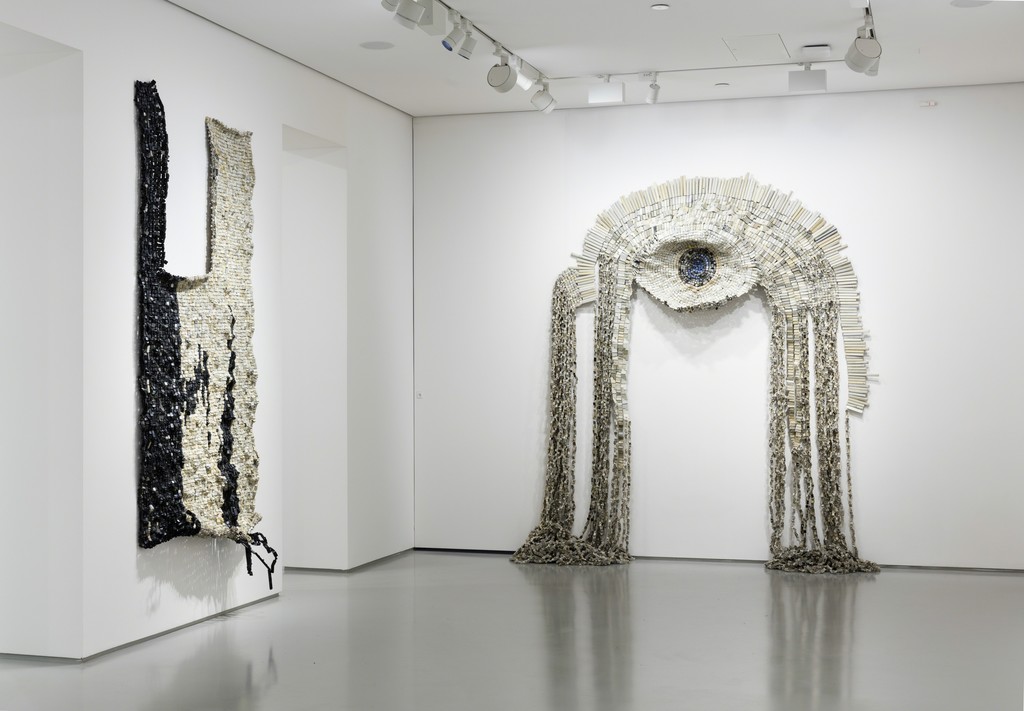 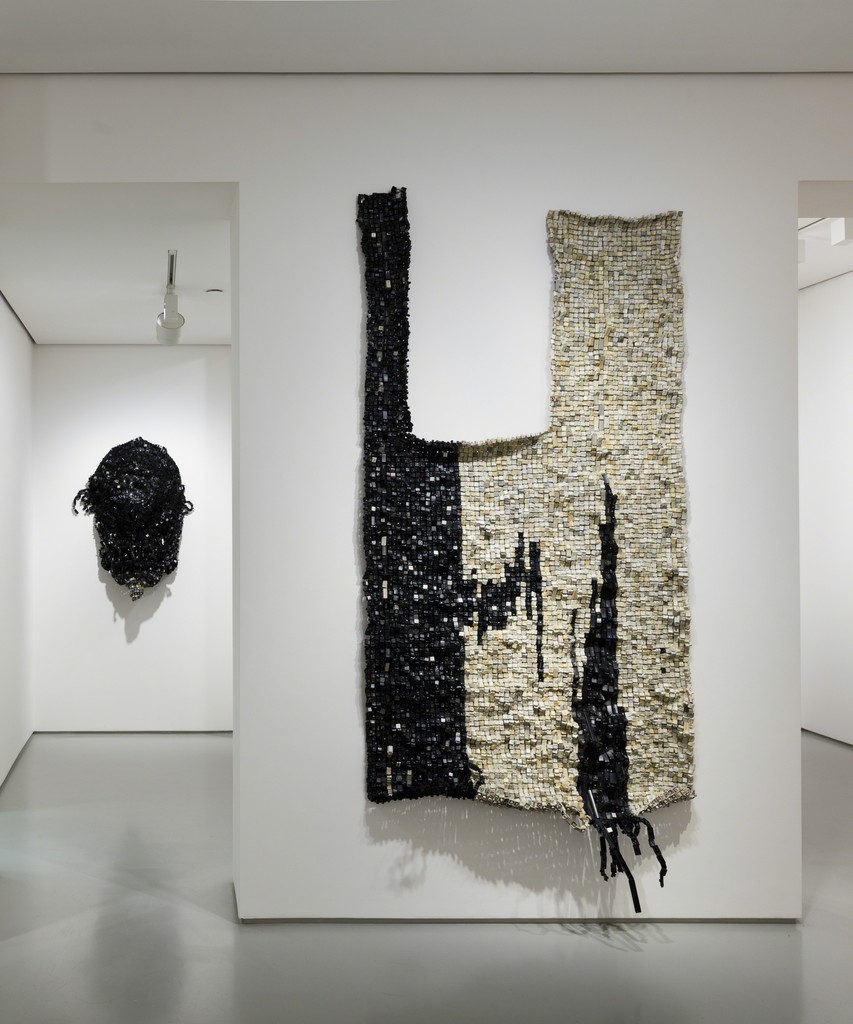 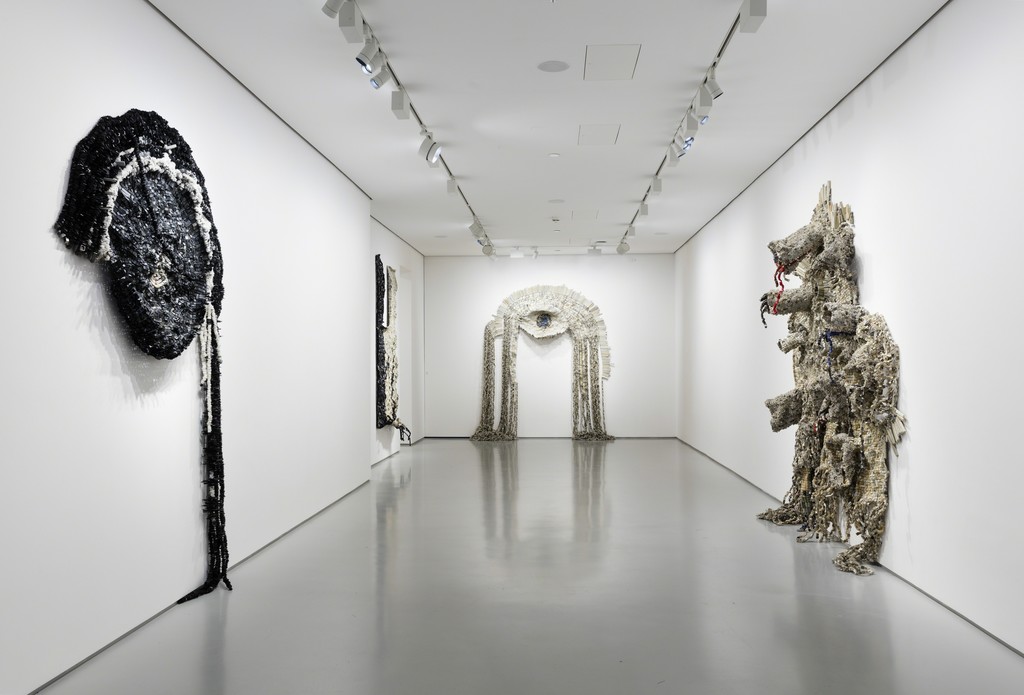 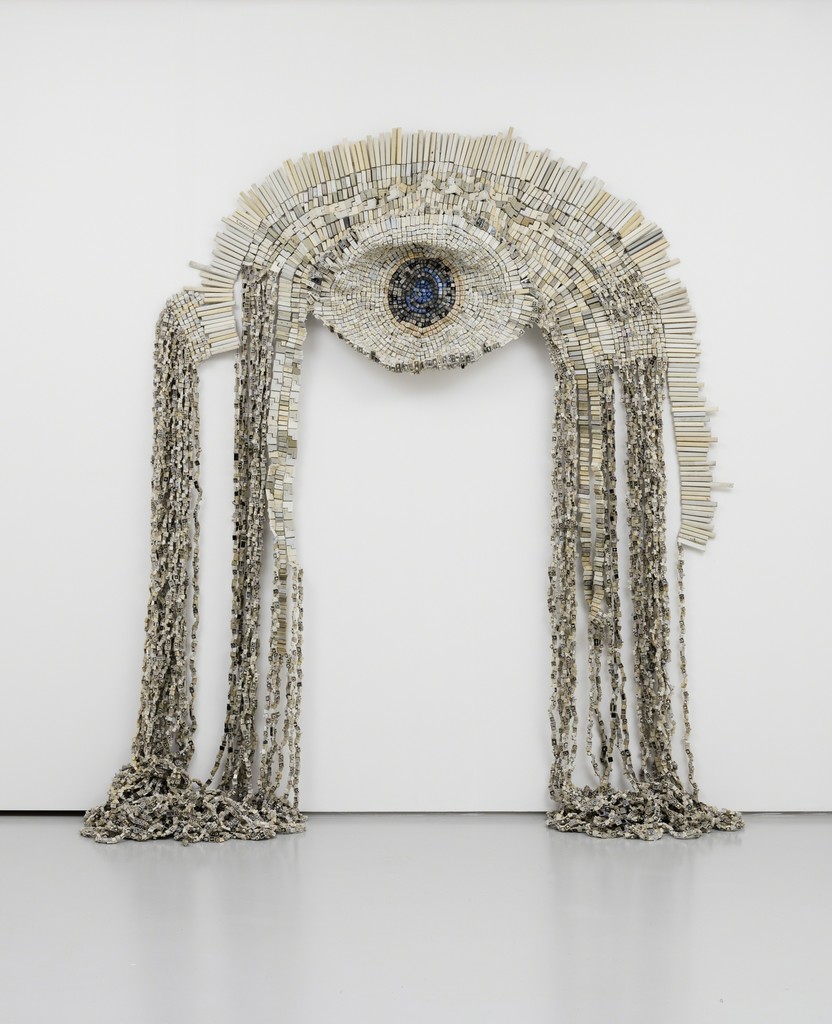 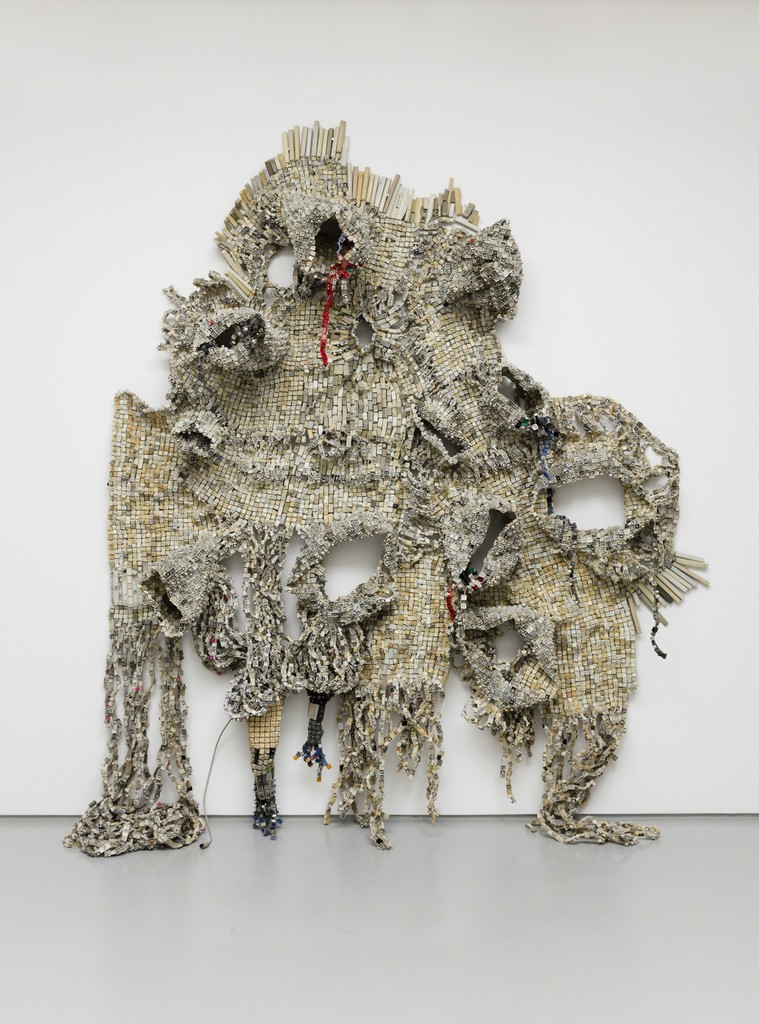 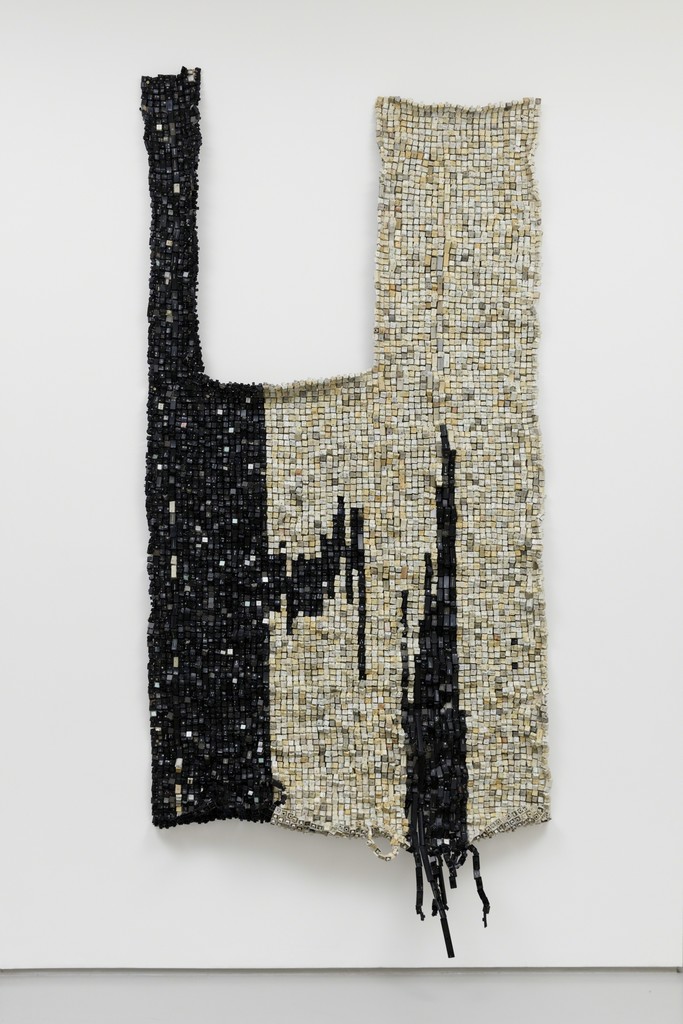 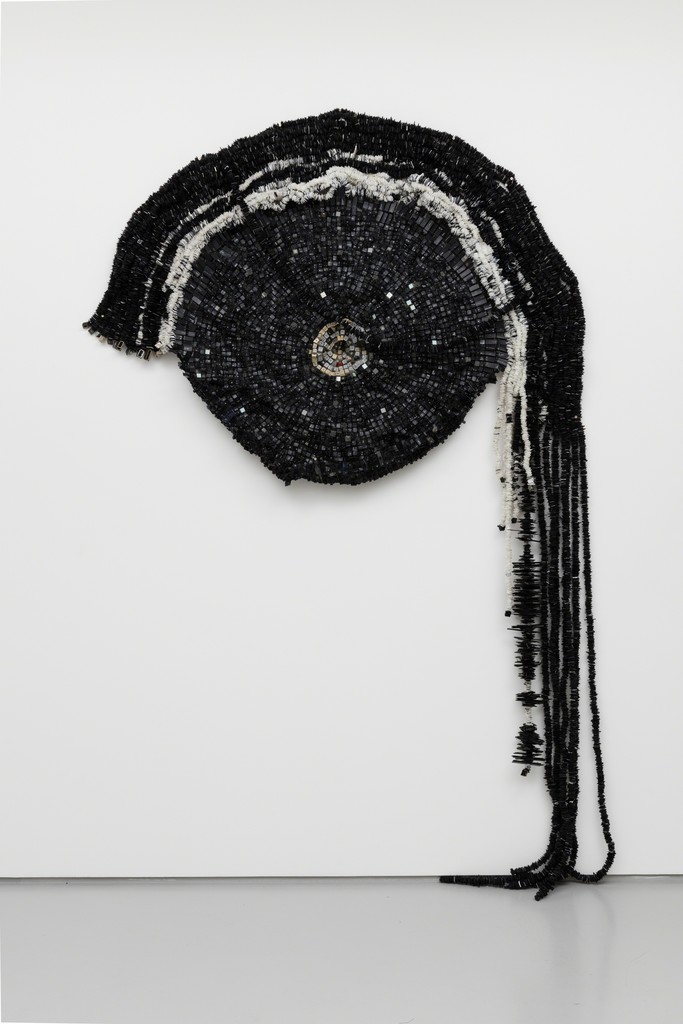 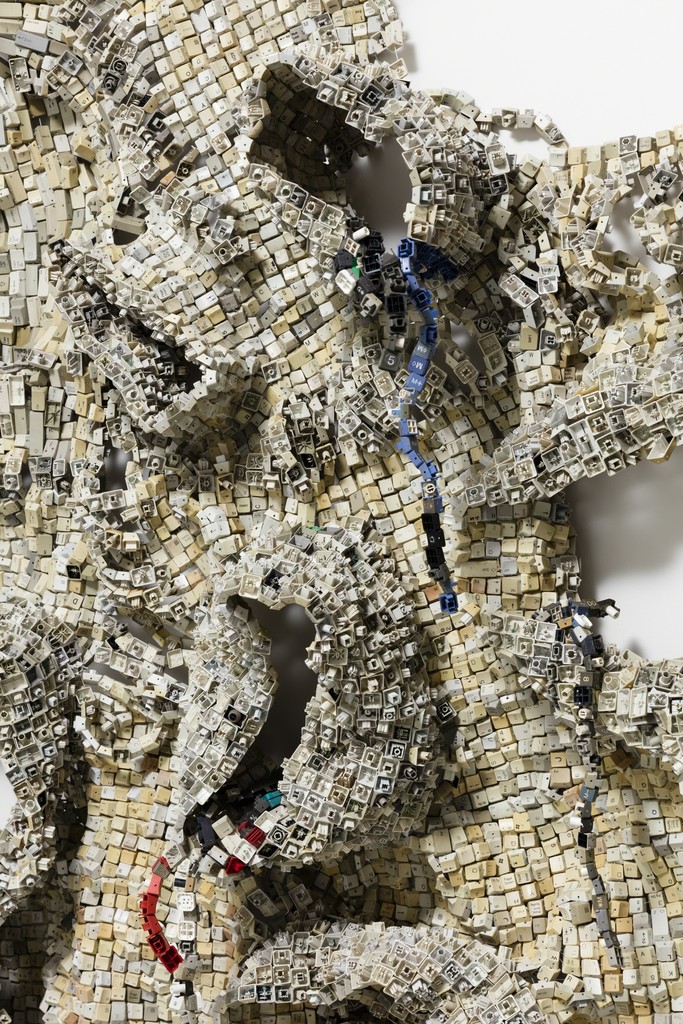 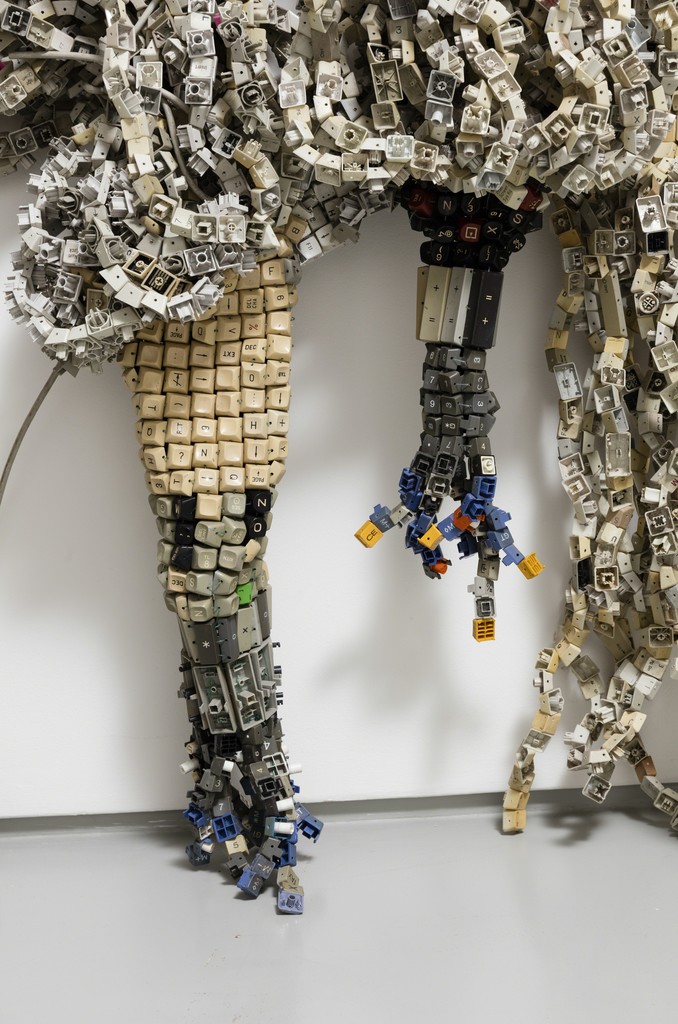 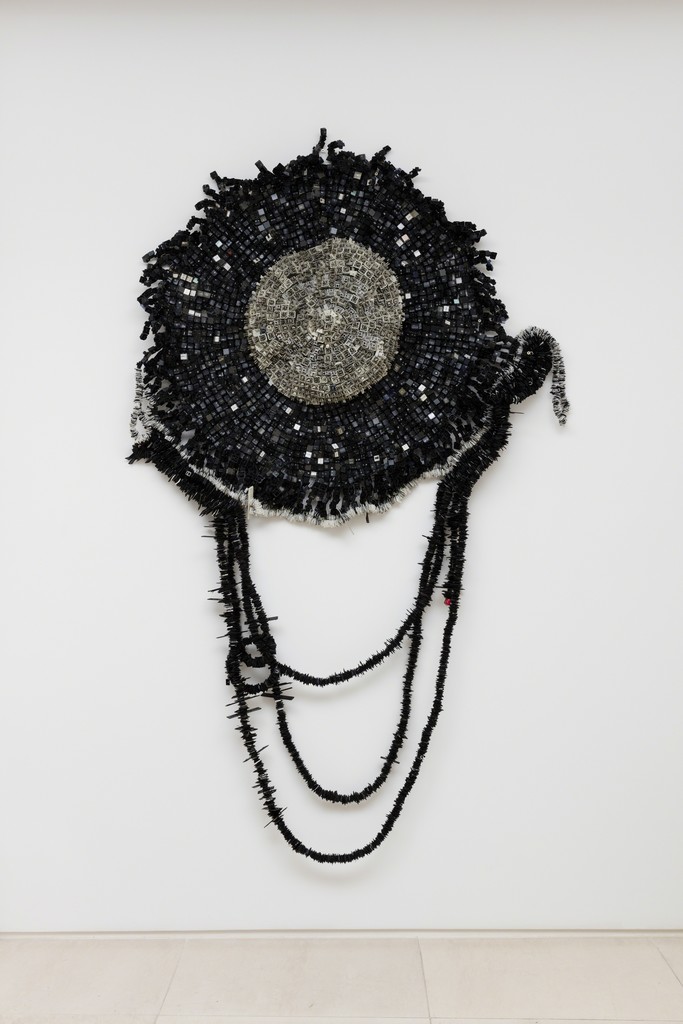 Tyburn Gallery is pleased to present Say Hello to English, Moffat Takadiwa’s second exhibition at the gallery. Born in Karoi, Zimbabwe, in 1983, and currently based in Harare, Takadiwa is known for his intricate wall sculptures and installations made from found materials, including spray-can debris, bottle tops and computer keyboard pieces. Takadiwa’s practice engages issues of material culture, spirituality, colonialism and identity, as well as the environment.

The title Say Hello to English derives from the fact that for many Zimbabweans, and Africans broadly, it has been essential to speak colonial languages to gain an education and get ahead during the colonial era. This created an English-speaking elite, with indigenous languages and native cultures diminished. The body of work connects us to current movements in Africa aimed at decolonizing the cultural landscape and in particular academia.

The concept of the exhibition has been inspired by the work of Kenyan writer Ngũgĩ wa Thiong'o. In his book ‘Decolonising the Mind’, the author highlights the inseparable connection between language and cultural dominance.

The exhibition consists of wall sculptures made from destroyed computer keyboards, through which the artist explores, destroys and finally reconstructs the legacy of this cultural imperialism perpetuated by language. For Takadiwa, language not only carries culture, but also embodies the values by which people perceive their place in the world. Dismantling colonial rule requires not simply the transfer of the instruments of government, but overcoming colonial cultural legacies, including language.

The artist takes inspiration from the “Rhodes Must Fall” movement in questioning the validity of Western oriented education in Africa. In creating the works for Say Hello to English, the artist, with his team of young assistants, destroyed thousands of computer key boards left over from the colonial administration, an action which mimics the tearing down of statues and burning down of libraries by students demanding the decolonisation of academia. Takadiwa then places the keyboards randomly side by side, thereby fabricating his own ‘decolonised’ meaning or language. Takadiwa concludes that colonial histories cannot be entirely destroyed or denied but must instead be used to construct new narratives.

One of the central works of the show, "The Falling of Rhodes(ia)" 2017, recalls the statue of the arch imperialist Cecil John Rhodes which was recently removed from Cape Town University following protests by students. However, Takadiwa’s work is no copy of the statue; instead the

computer keyboard pieces are re-assembled to create an entirely novel, mythical creature to replace that of Rhodes.