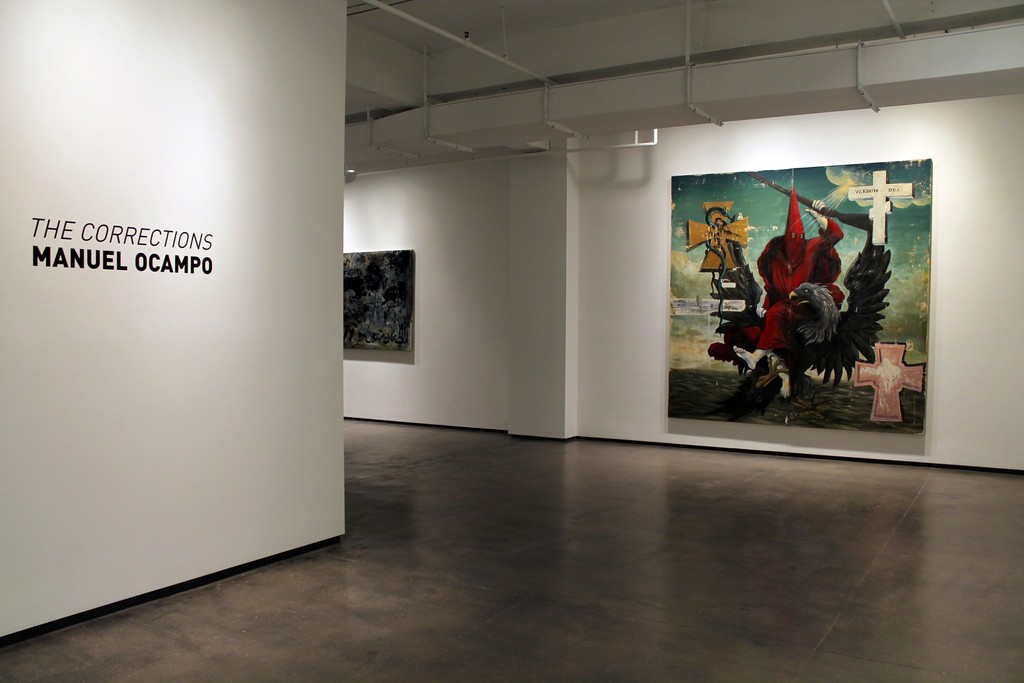 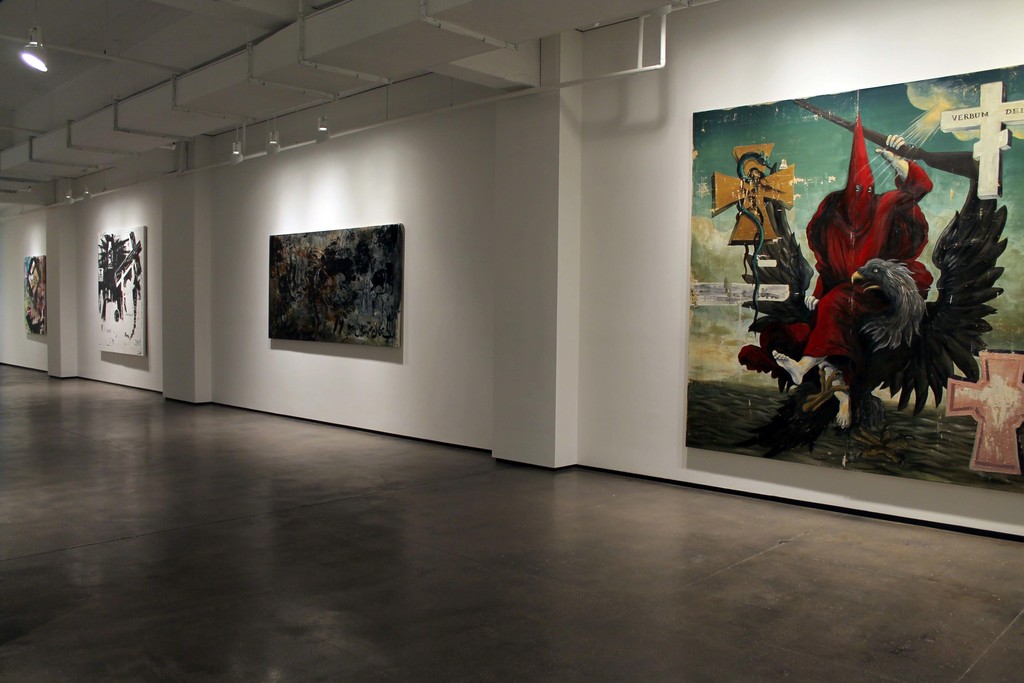 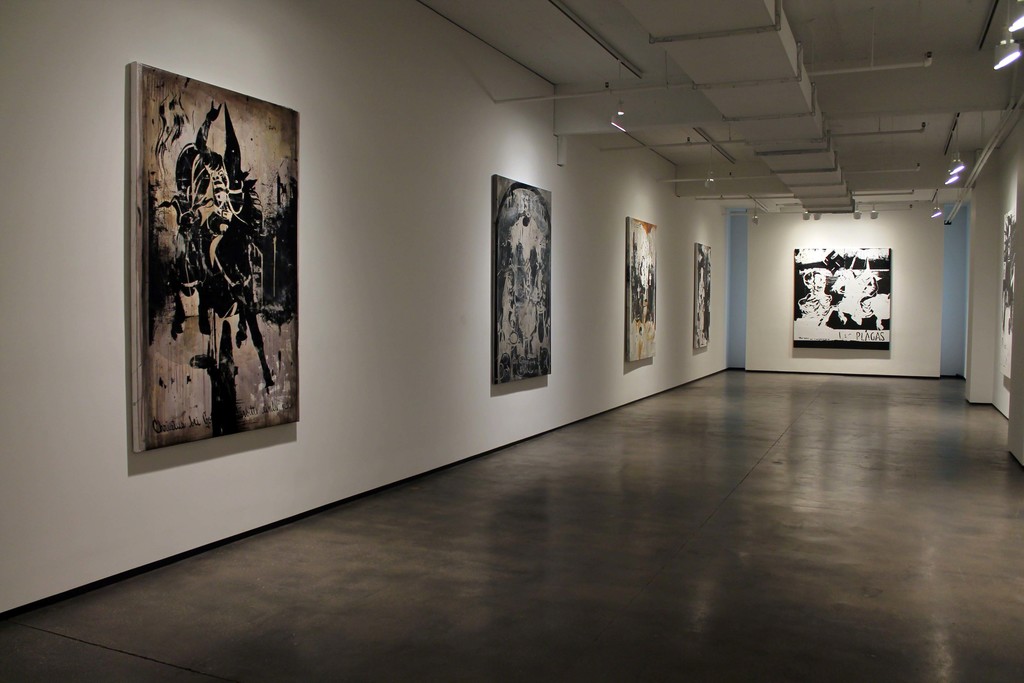 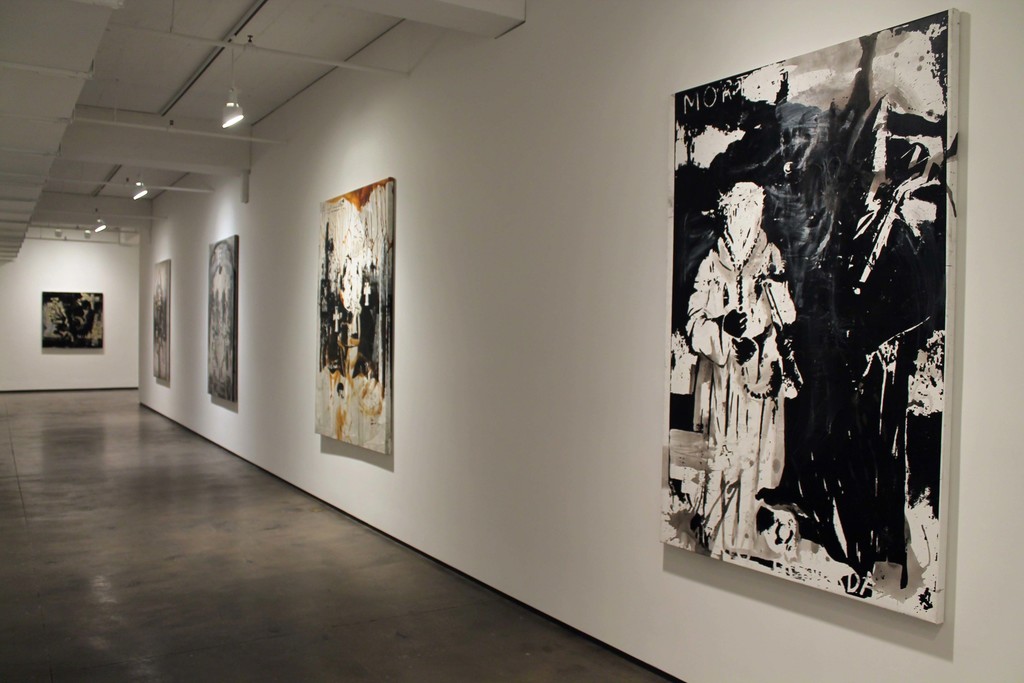 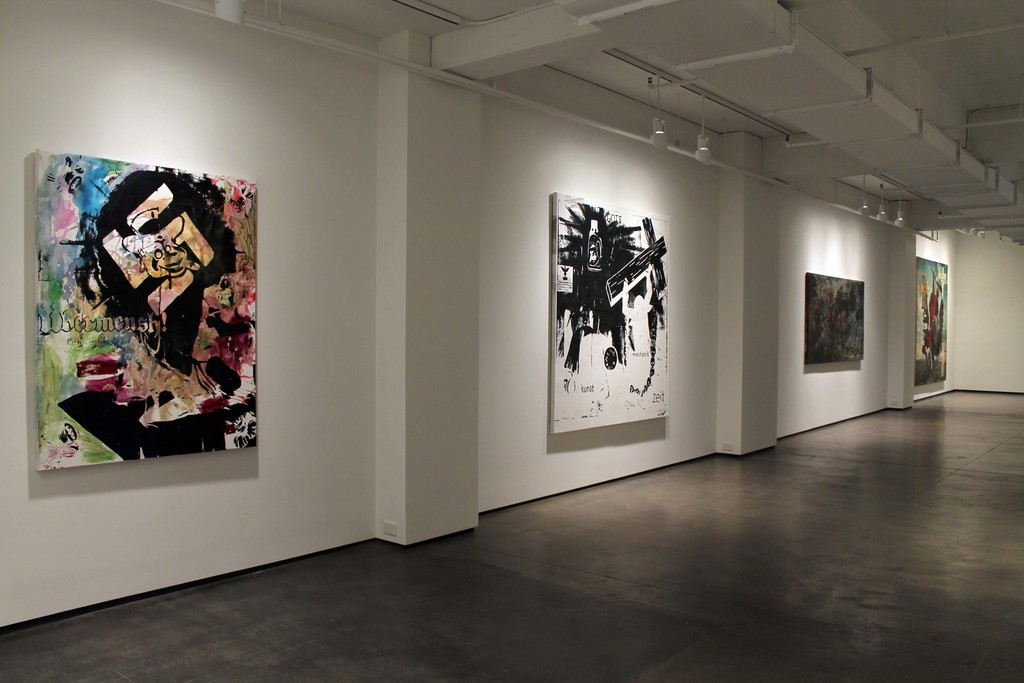 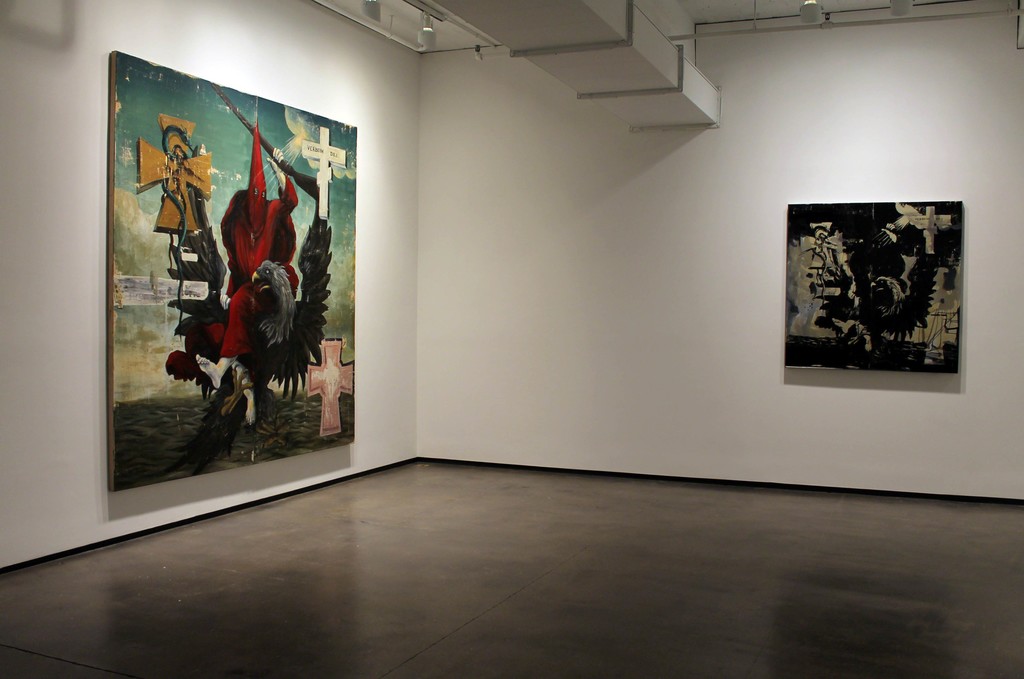 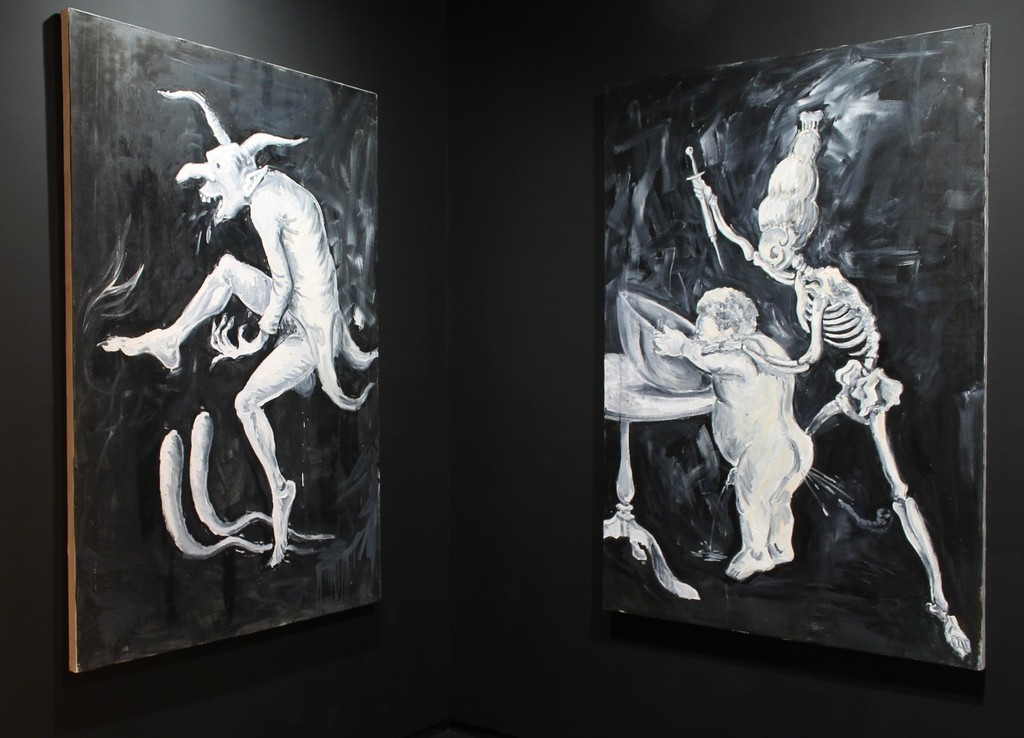 Manuel Ocampo has been a vital presence on the international art scene for over twenty-five years, with a reputation for fearlessly tackling the taboos and cherished icons of society and of the art world itself. Now based in Manila, the Philippines, he had an extended residency in California in the late 1980s and early 1990s and continues to spend significant time working in both the US and Europe. For The Corrections, his third solo exhibition with Tyler Rollins Fine Art, Ocampo looks back with a critical eye on his early work, making “corrections” to certain key paintings from the early 1990s, which were inspired by his experience living in Los Angeles during a period of heightened racial tensions, culminating in the race riots of 1992. Imagery of race, religion, and violence had pervaded Ocampo’s work since the late 1980s, informed by the context of Los Angeles. “I felt that LA was no different from Manila,” he recalls; “the huge class disparity, the balkanization of communities, the political corruption, consumer culture, celebrity culture, the traffic, water shortages, etc. I guess I had a feeling that something like the riots was bound to happen. Being an immigrant from the Philippines, a former colony of the US and Spain, I wanted to bring these references into my work.” Ocampo created what he calls “mock history paintings,” an impressive example of which, Yo Mate A Historia (1991), is included in the current exhibition. These works reference the style and imagery of the Spanish Catholic painting of the Philippines, combined with motifs that evoke both the once commonplace racial caricatures of African Americans and the depictions of Filipinos in American political cartoons during the period of the brutal Philippine–American War of 1899–1902.

For The Corrections, Ocampo made silkscreens based on photographs of his older paintings, altering the images to resemble darkened and distorted photographic negatives. New interventions were then hand painted on top of these images, creating rich, multi-layered compositions that capture a sense of the passing of time, the evolution of consciousness, and the ongoing structuring of personal and group identities. One’s view of the works is perhaps inevitably colored by the current racially charged environment in the United States in the aftermath of a number of police shooting incidents around the country – although Ocampo emphasizes that “the works in the show were not really meant to comment on the current situation in the US, but accidentally it did. My concern in going back to the works I did over 20 years ago was that I wanted to re-examine the iconography I used back then and how I felt about ‘correcting’ them. In fact, what I mean by ‘correcting’ is to change their meaning, to depoliticize them.” The dark, disturbing imagery of the original paintings becomes literally darker, more obscured and abstracted. The older works’ strong socio-political commentary is less foregrounded – now not so much a loud proclamation but rather a more intimate expression of the artist’s own inner world. We get a sense of the artist wrestling with his own demons, with his own past and art. The record of this struggle is perhaps less seen in dramatic brushstrokes, the “hand of the artist,” but in the artist’s shoe-prints that appear all over the paintings, marks that are at once highly personal and yet strangely generic; they could be anyone’s prints, our own.

Born in 1965 in Manila, the Philippines, Ocampo had his first solo exhibition in 1988, in Los Angeles, setting the stage for a rapid rise to international prominence. By the early 1990s, his reputation was firmly established, with inclusion in two of the most important European art events, Documenta IX (1992) and the Venice Biennale (1993).  Also in the early 1990s, he participated in the landmark exhibition, Helter Skelter: L.A. Art in the 1990s at The Museum of Contemporary Art, Los Angeles (1992), as well as Individual Realities in the California Art Scene at the Sezon Museum of Modern Art, Tokyo (1991), and Jean-Michel Basquiat & Manuel Ocampo at the Henry Art Gallery, Seattle (1994). He has subsequently participated in numerous museum exhibitions and biennials around the world, including the biennials of Gwangju (1997), Lyon (2000), Berlin (2001), Venice for a second time (2001), Seville (2004), and the Asia Pacific Triennial (2012). Throughout 2015, his work will be showing in the traveling exhibition, Come as You Are: Art of the 1990s, opening February 8 at the Montclair Art Museum.