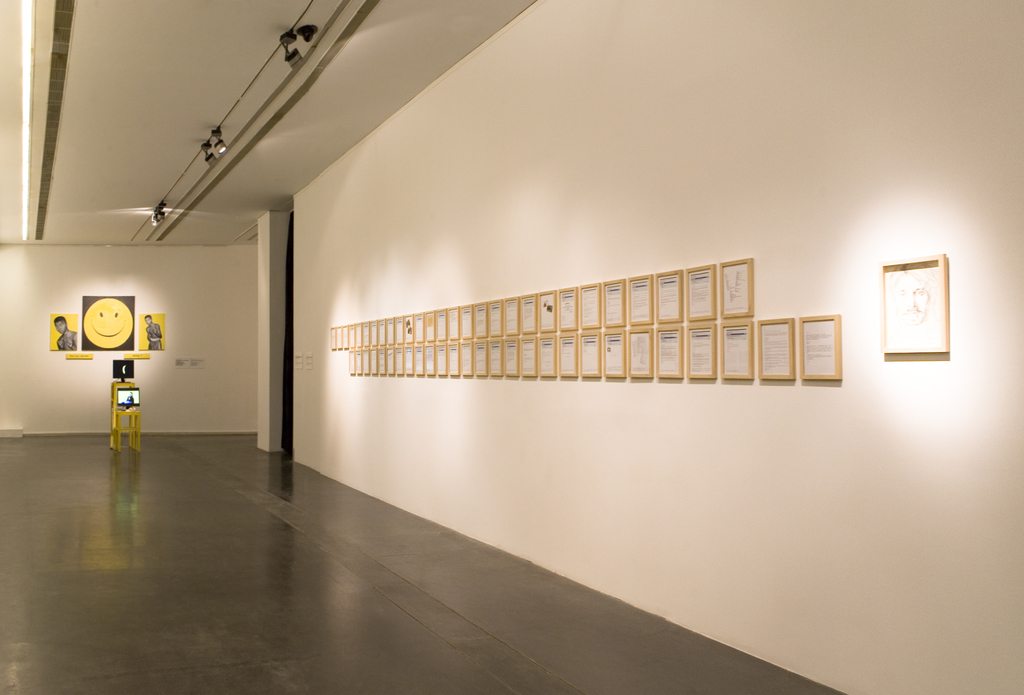 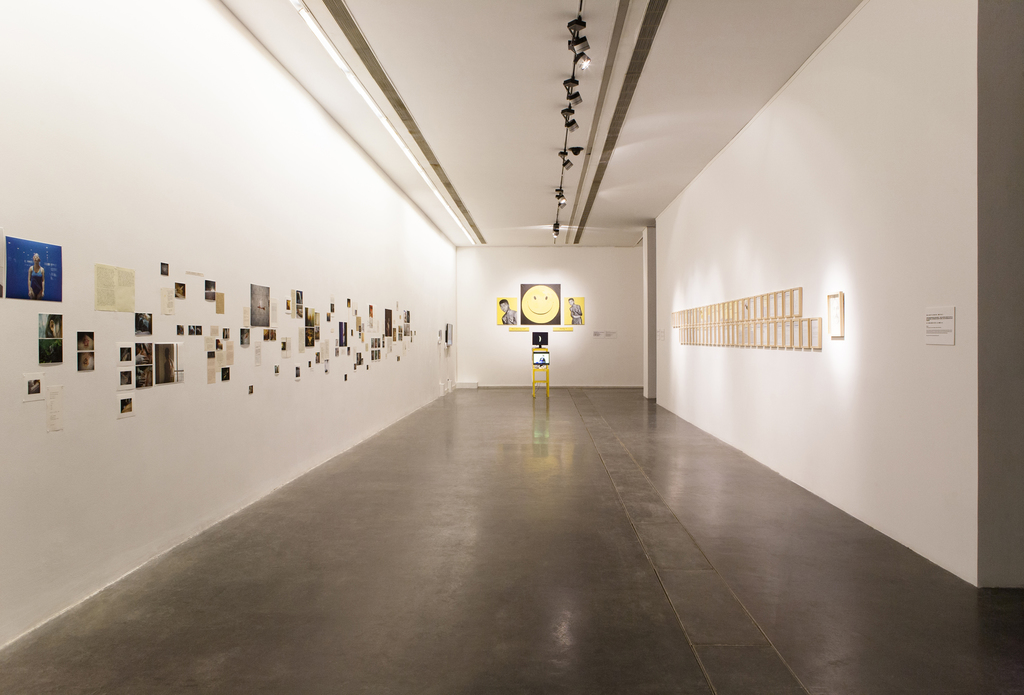 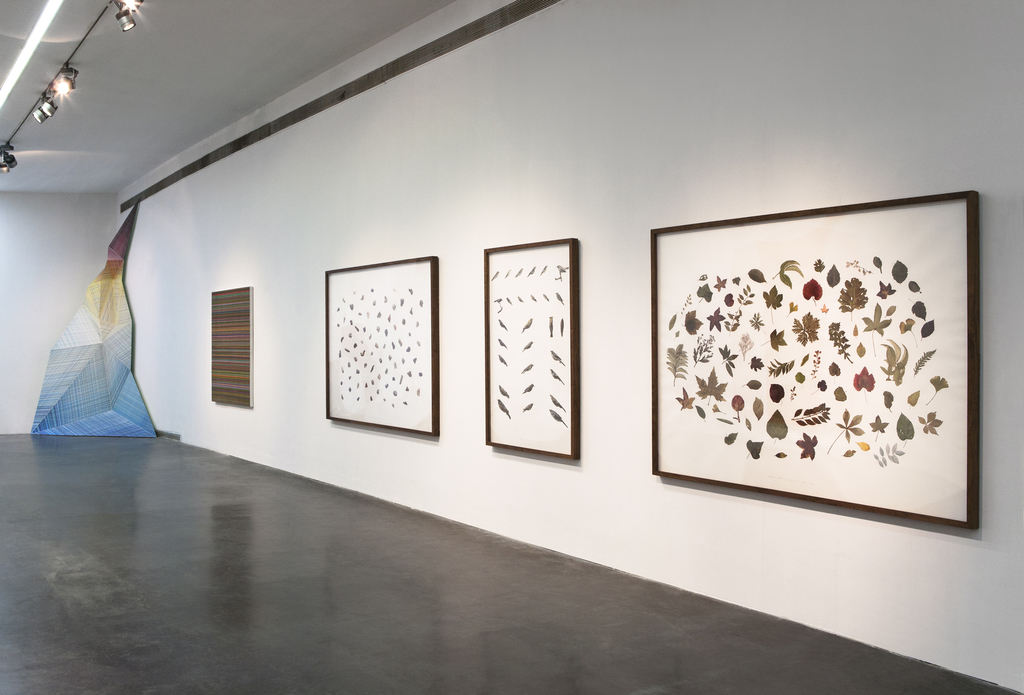 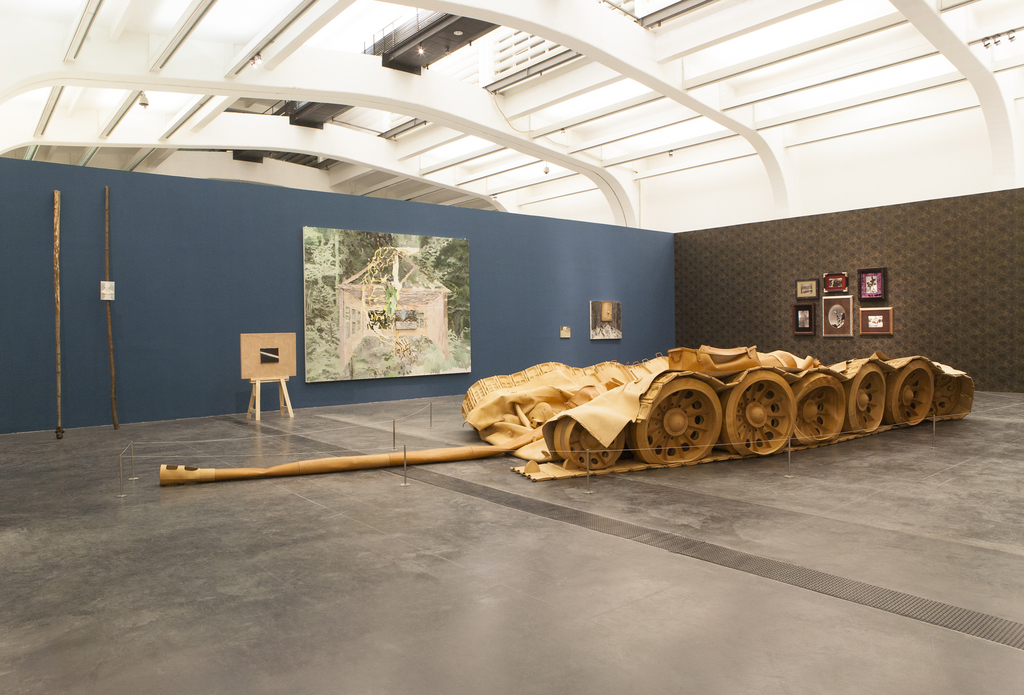 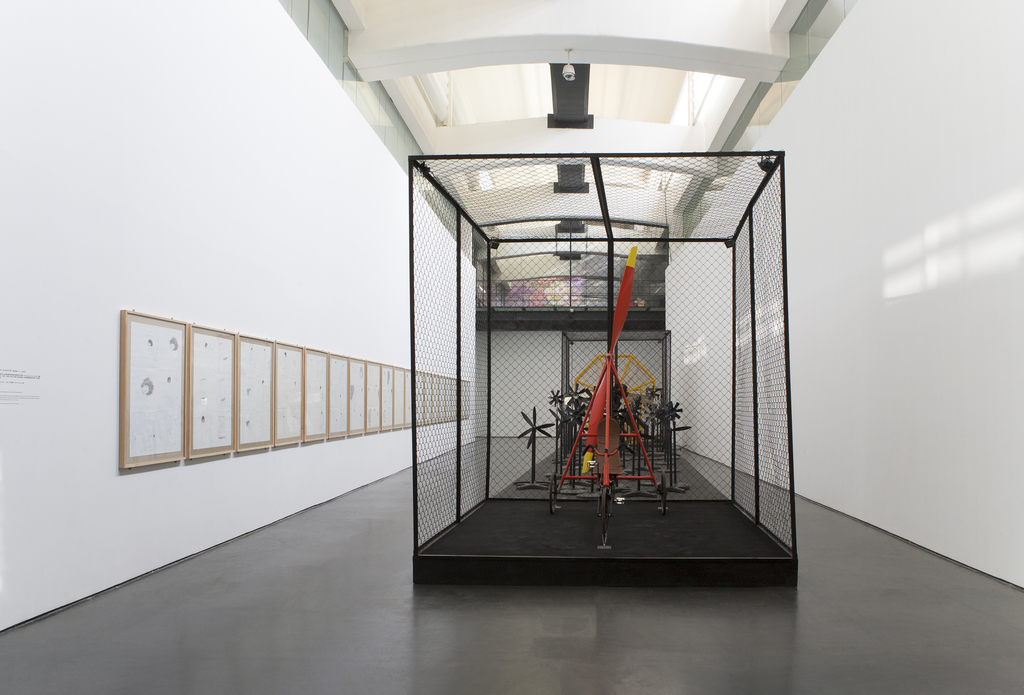 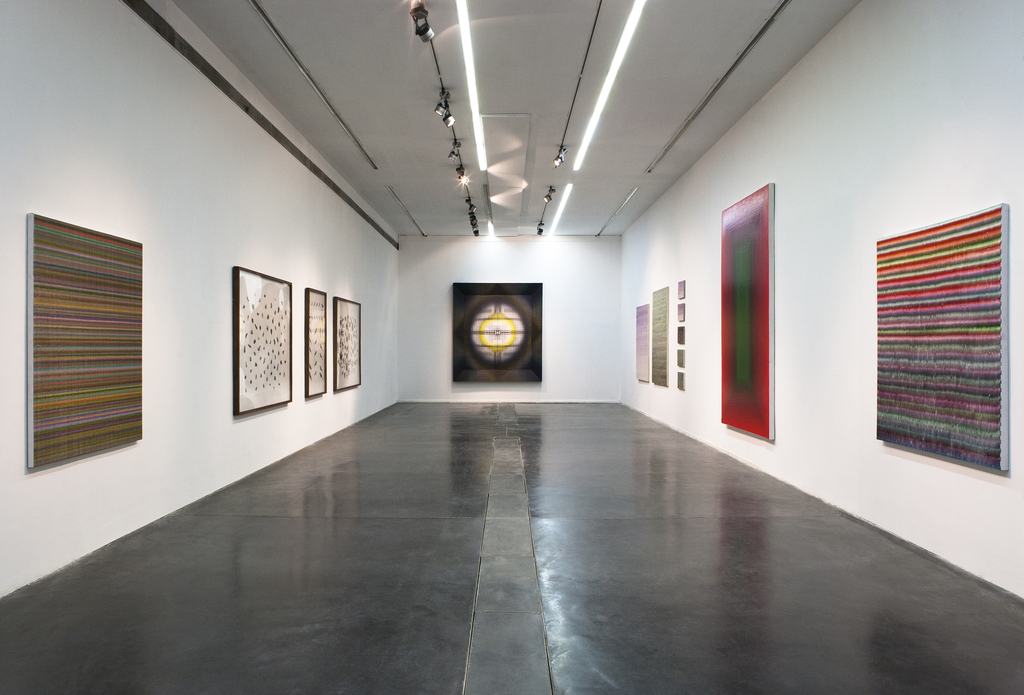 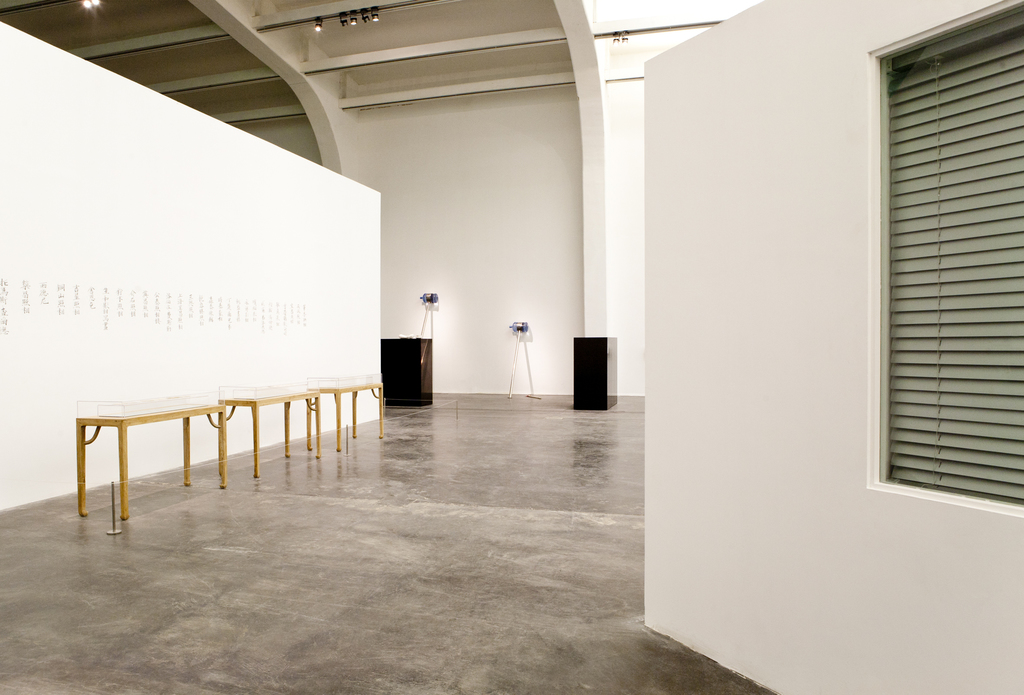 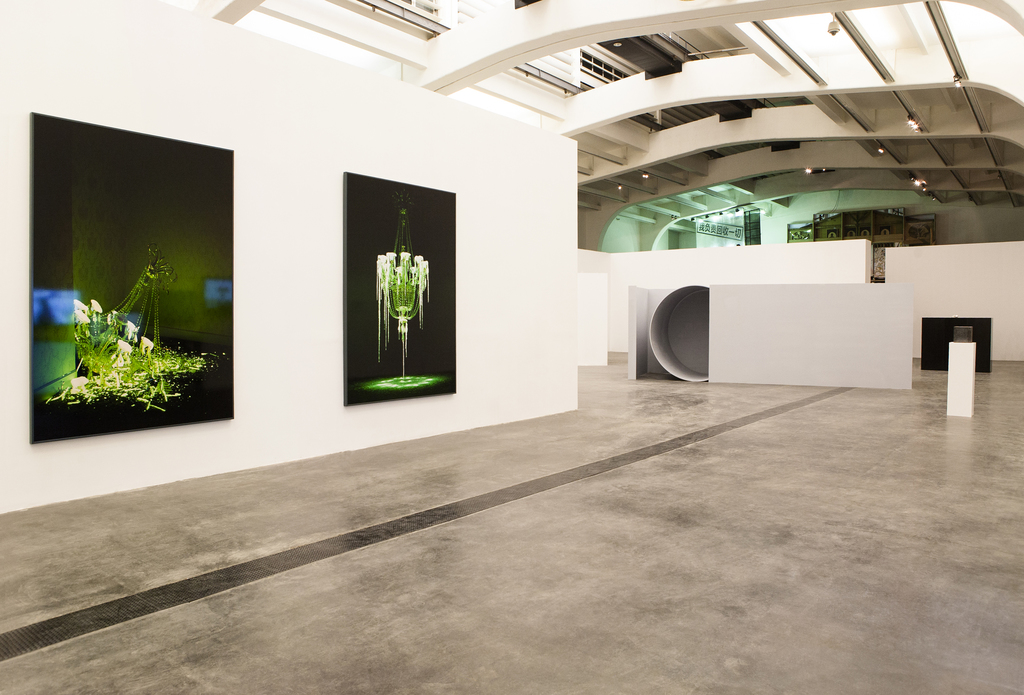 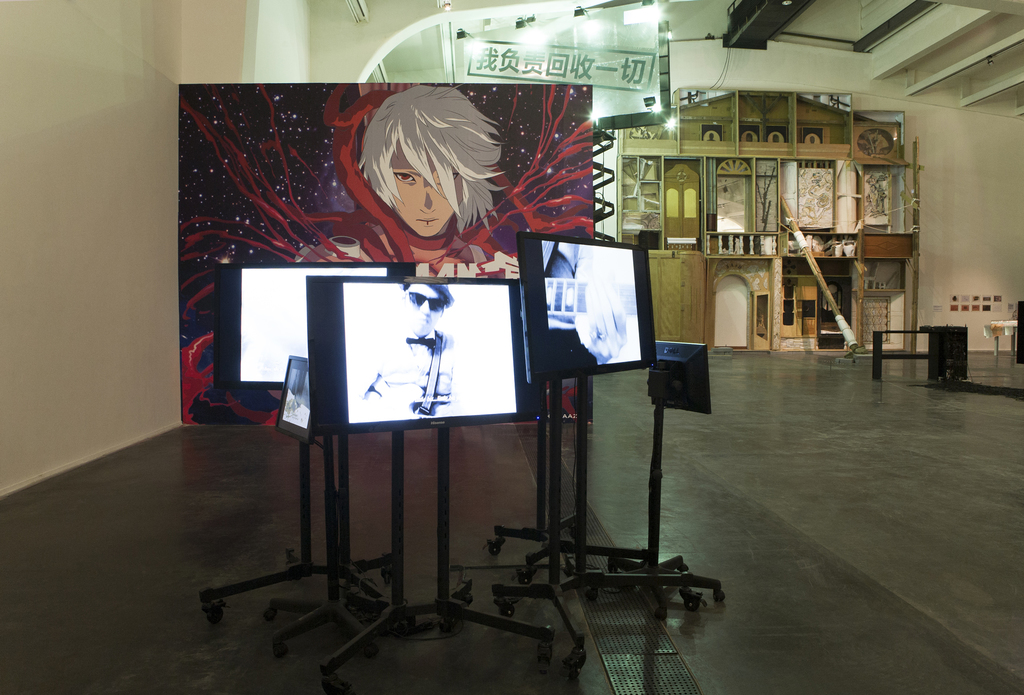 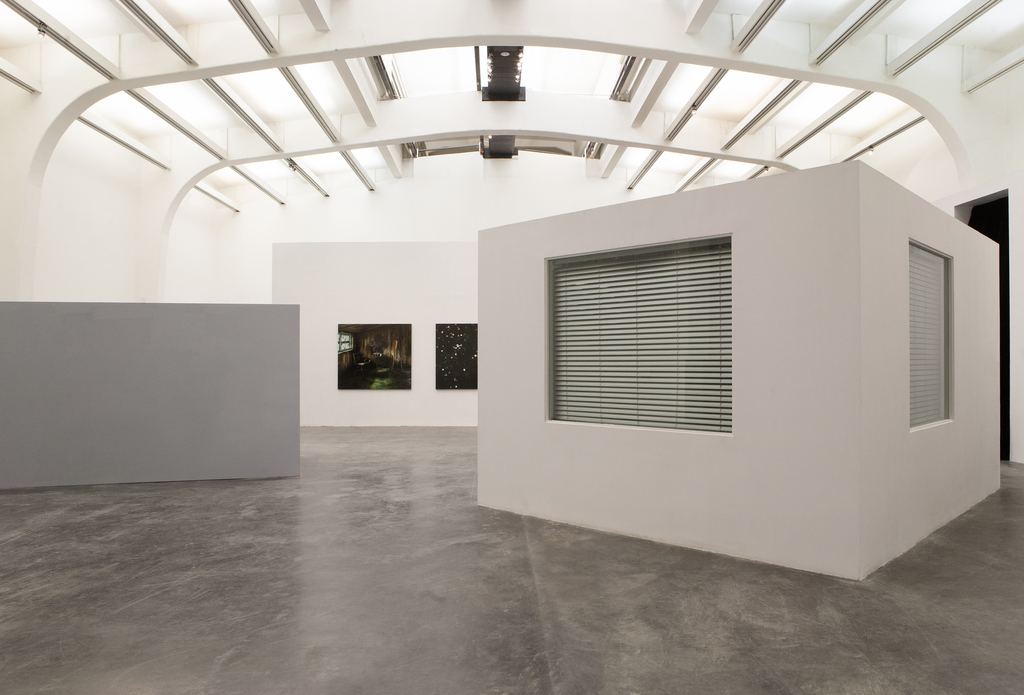 The Ullens Center for Contemporary Art opens its 2013 program with ON | OFF: China’s
Young Artists in Concept and Practice. This groundbreaking exhibition, which will occupy
all UCCA exhibition spaces, marks the most comprehensive survey to date of the
generation of artists born after the death of Mao and the end of the Cultural Revolution,
and at the dawn of the country’s era of opening and reform. Unparalleled in scope and
unprecedented in concept, ON | OFF will feature 50 commissioned works by 50 artists
and artist groups.
Curated by Bao Dong and Sun Dongdong, ON | OFF is an effort to effectively document a
new generation of Chinese artists born after 1975 who have “grown up in a society and
culture beset by binaries, constantly toggling between extremes.” The title ON | OFF, which
comes from the graphical interface of a common VPN (virtual private network) software
used to scale China’s Internet firewall, represents this binary condition at its simplest and
most direct.
The exhibition is rooted in a series of such tensions that intensified in 1999, just as the
Internet was becoming implicated into everyday life. Since then, it is precisely this
generation of artists that has surfaced and begun to attract attention, as Chinese
contemporary art has moved away from the underground scene of the 1990s and a new
commercial market and institutional infrastructure have come to replace it. Today’s most
notable young artists are the recipients of formal art educations, and many are gradually
fitting into a rising gallery system. They exhibit a strong tendency toward self-organization
and collective practice, yet represent a wider diversity of individual subjectivities and styles
than ever before seen in China. They actively participate in the emergence of new art
institutions even as they question and mediate these developments. Unlike previous
generations, they stay informed of international developments in real time, even as they
continue to run up against a distinct and specific set of constraints and challenges.
ON | OFF is above all a research project, drawing on preparatory visits to more than 200
artists in cities including Shanghai, Hangzhou, Guangzhou, Chengdu, Chongqing, Wuhan,
and Shenyang. Accompanied by a wide range of publications and programs, the exhibition
aims to articulate a generational sensibility by highlighting individual positions. “Since its
founding in 2007, the Ullens Center for Contemporary Art has been a platform for
presenting the freshest artistic voices in China, and for placing them into the twin contexts
of Chinese art history and the international conversation around contemporary art,” said
UCCA director Philip Tinari. “We are extremely excited to mount an exhibition that will
showcase the wide range and high caliber of work being made in China today.”
PARTICIPATING ARTISTS
Birdhead, Chen Wei, Chen Yujun + Chen Yufan, Chen Zhe, Chen Zhou, Cheng Ran, Fang Lu,
Ge Lei, Gong Jian + Li Jinghu, Guo Hongwei, He Xiangyu, Hu Xiangqian, Hu Xiaoyuan,
Huang Ran, Jiang Pengyi, Jin Shan, Lee Fuchun, Li Liao, Li Ming, Li Ran, Li Shurui, Liang
Yuanwei, Liu Chuang, Liu Xinyi, Lu Yang, Ma Qiusha, Qiu Xiaofei, Shang Yixin, Shi Wanwan,
Song Ta, Song Yuanyuan, Sun Xun, Tang Dixin, Wang Guangle, Wang Sishun, Wang Yuyang,
Wen Ling, Wu Junyong, Xie Molin, Xin Yunpeng, Xu Qu, Xu Zhe, Yan Xing, Yang Jian, Yang
Xinguang, Zhang Ding, Zhang Liaoyuan, Zhao Yao, Zhao Zhao, Zhou Tao.
ABOUT THE CURATORS
Bao Dong (b. 1979, Anhui province) is an art critic and independent curator. He graduated
from the Sichuan Fine Arts Academy in 2006 with an M.A. in Art History and has curated
exhibitions for a wide range of art organizations since 2005. In contributing essays to the
artistic dialogue and other forms of involvement, Bao has established himself as a leading
curator and critic of work by the “new generation.”
Sun Dongdong (b. 1977, Nanjing) is senior editor at LEAP magazine, where he has worked
since the magazine’s founding in 2010. He received his M.F.A. from the Nanjing Academy of
Art in 2005. Since 2001, Sun has been involved with contemporary art exhibitions, worked
as a critic, and curated shows at the Nanjing Sifang Contemporary Art Museum and the
Iberia Center of Contemporary Art in Beijing.
PARALLEL PROGRAMMING

ON | OFF will be accompanied by a full calendar of events, including a lecture series, a
documentary screening, and a concert series.
SEE / SAW: Collective Practice in China Now is a preliminary exhibition to ON |OFF that
invites thirteen artist collectives to show for one-week intervals. Curated by UCCA curator
Paula Tsai, SEE / SAW examines the production processes and decisions involved in
creative collaborations, which have become a major trend in the Chinese context during
recent years. In focusing on the concept of the “group” and exploring notions of codependence and reaction, viewers are, with the exhibition’s weekly reincarnations, urged to
observe how the exhibitions may or may not play off one another.
Participating collectives include Double Fly Art Center, A Diaodui, Museum of the Unknown,
Zuzhi, North Village Independent Workshop, Irrelevant Commission, 8mg, TOF, Art Praxis
Space, LVXIAO, Nanshan Painting Group, GUEST, Hexie Baroque, and Cell Art Group.
“Self-made · Self-said” is the first half of ON | OFF’s sixteen-week panel discussion series,
occurring in conjunction with the exhibition “SEE / SAW: Collective Practice in China Now”
(2012.11.17—2012.12.30) and as a preview for ON | OFF. ON | OFF curators Bao Dong and
Sun Dongdong and SEE / SAW curator Paula Tsai engage members of art collectives in
lively discussions on their individual and collaborative creative practice.
“Discrepancy and Commonalities: Regarding the Particularities of Artistic Practice”
will present a series of weekly panels, as ON | OFF artists as well as key figures in various
areas of the contemporary art world discuss “individualism in artistic practice.”
UCCA has collaborated with ON | OFF curators Bao Dong and Sun Dongdong to create a
documentary film that provides background insights into the curatorial processes and
creation of ON | OFF. Xie Meng (deputy director of education and public programming at
UCCA) goes on the road with the curators as they travel across China to cities including
Beijing, Shanghai, Hangzhou, Guangzhou, Chengdu, Chongqing, Wuhan, and Shenyang,
researching and seeking out a “new generation” of creative minds. Premiere to be held at
UCCA in March 2013.
The ON | OFF Concerts will introduce the maturity, diversity, and innovation of young
composers born in China in the 1970s and 80s as well as the first-generation Chinese
diaspora. Organized into three concerts to be held in January, March, and April, musical
performances and 15 premieres commissioned for ON | OFF will be presented within
philosophical, experiential, and experimental contexts. Curated and presented for ON | OFF
by Beijing New Music Ensemble founder Eli Marshall.

ON | OFF will be accompanied by two publications:
ON | OFF: Collective Practice in China 2002-2012 is an anthology of essays offering a
comprehensive overview of creative collaborative practice in China over the past decade.
Texts provided by ON | OFF curators Bao Dong and Sun Dongdong, UCCA curator Paula
Tsai, and critic Guo Juan. Published in Chinese only, to be released with the opening of ON
| OFF.
ON | OFF: China’s Young Artists in Concept and Practice is a complete, bilingual
exhibition catalogue featuring in-depth introductions to each artist, forming an extensive
document of a new generation. Available March 1.
Both books are co-published by UCCA with Hinabook and the World Publishing Company,
Beijing. Both publications will be distributed in China and internationally, and will be
available at the UCCA bookstore.
ON | OFF Limited Editions
UCCASTORE has released a new line of ON | OFF limited edition design items including two
T-shirt designs, eco-friendly tote bags, and key rings. The ON | OFF exhibition T-shrirts are
uniquely designed with patterns reflecting ideas of uncertainty and variability. The white Tshirts feature an hourglass, indicating the constant toggling between states of ON and OFF;
the black T-shirts reflect the effects of multivalence and liminality stressed in the
exhibition, resulting in an attempt to explore the possibilities of the unclear and
unconfirmed. The ON | OFF limited edition eco-friendly tote bags can be carried on the
back or slung over a shoulder. The design elements of this bag revolve around the letter O-
-cleverly formed by the bag's handles--emphasizing the minimalist balance and symmetry
of the exhibition's title. In addition, UCCASTORE has collaborated with ON | OFF artist Wu
Junyong to create a series of illustrated key rings—metaphorical representations of
gloominess, hinted at by emitted noises, that open up a greater space for imagination.
During the ON | OFF exhibition period, UCCASTORE will collaborate with artists Chen
Yufan, Wen Ling, Yang Jian, and Xu Zhe to create a series of Limited Editions. Publications
on several ON | OFF artists are also available.

UCCA is honored to announce LVMH Moet Hennessy Louis Vuitton as the Lead Sponsor
of ON | OFF. As a supporter of the 2009 UCCA exhibition “Breaking Forecast: 8 Key Figures
of China’s New Generation Artists” and other exhibitions during the past few years, LVMH
has a long history of supporting UCCA in its presentation and promotion of China’s young
artists.
Exhibition publications are generously supported by the H2 Foundation for Arts and
Education Limited and Hallam Chow. Additional support is provided by the UCCA
Patrons Council.

The Ullens Center for Contemporary Art is a not-for-profit art center in Beijing, located at
the heart of the 798 Art District. As a platform for contemporary art linking China and the
world, UCCA offers an average 15 exhibitions a year and over 500 public programs
including art talks, film screenings, performances, workshops and public festivals. The
international center maintains a special focus on recent developments and historical
movements in Chinese contemporary culture, whilst also showcasing the latest in art and
design and fostering international exchange.