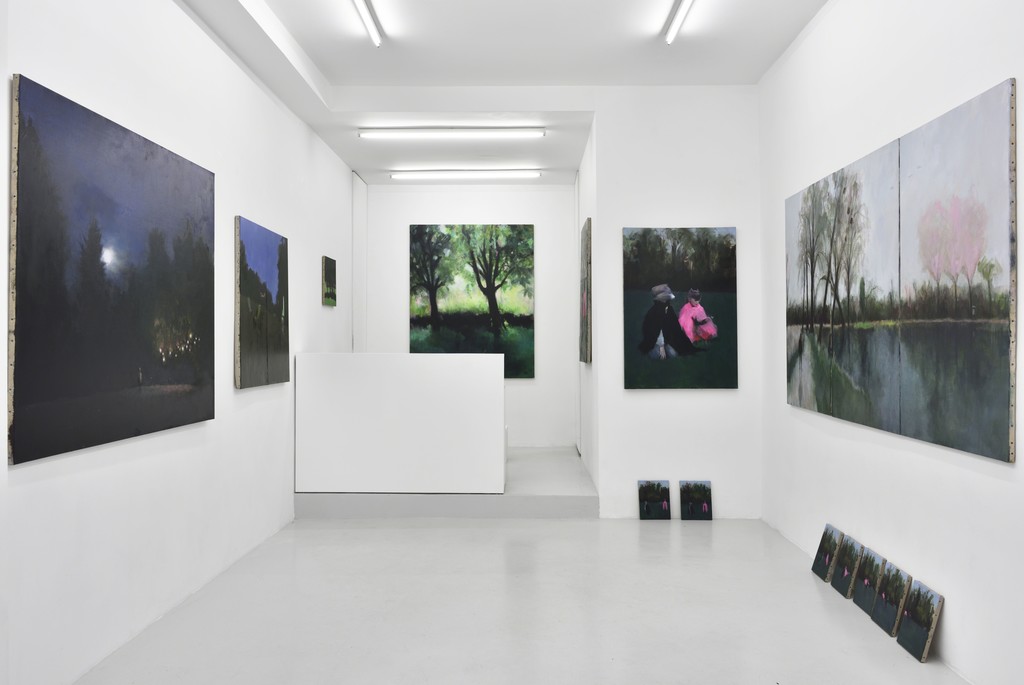 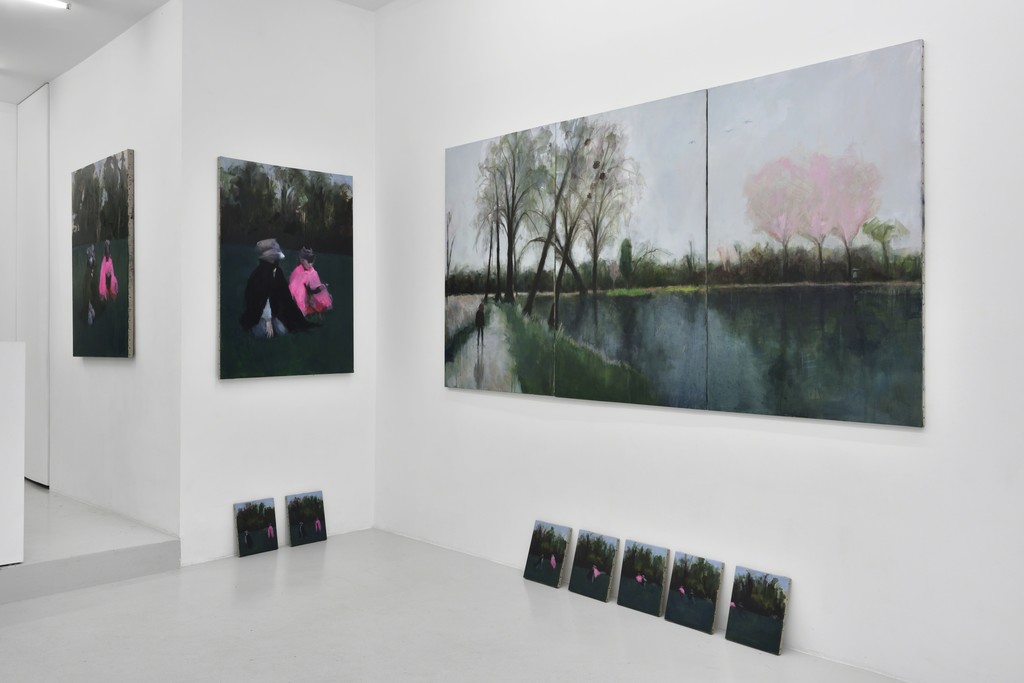 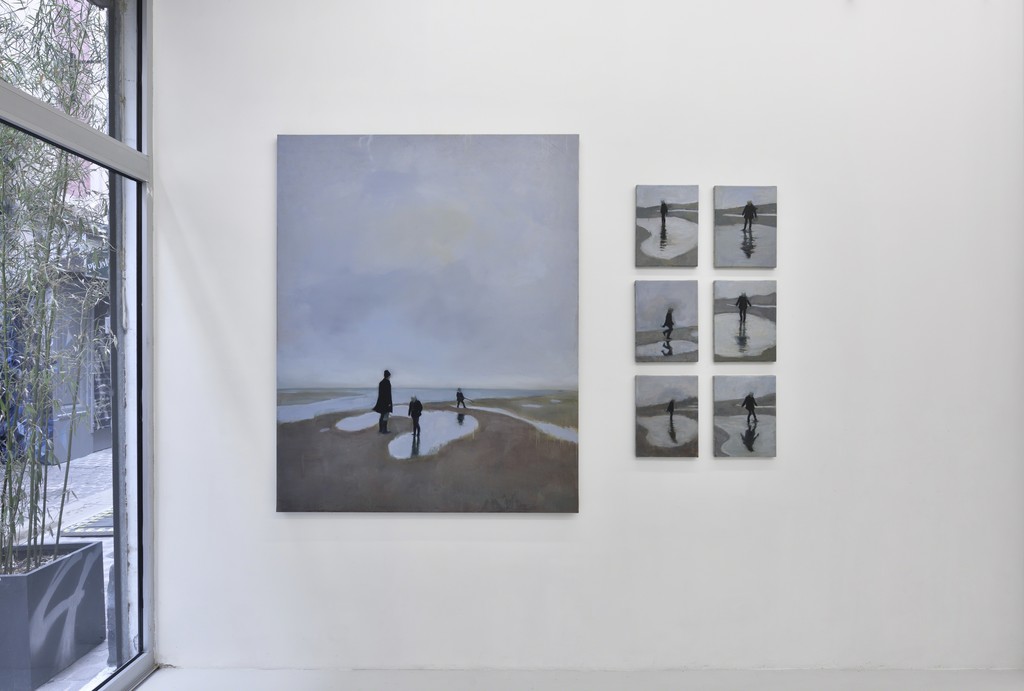 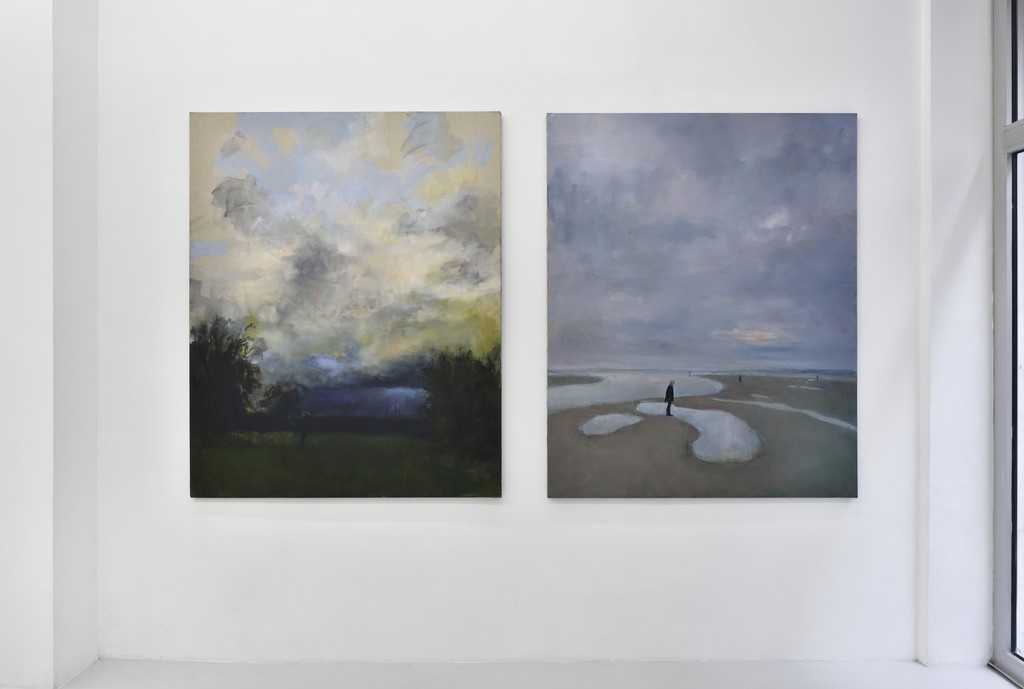 More than any other vital demonstration, I studied, all along my life, births. This is where, for me, that exists the essential drama, better than in death which is only a banal defeat.
Colette – Le Blé en Herbe (1923)

Sandrine Rondard paintings result from a protocol where observation, staging and a plastic rendering of the image are set up. First, there is the walking. An appropriate moment for the encounter, with a landscape, a natural element, a color, a light. All these elements create the different issues of her pictural work. “I prefer drooping lights, between dog and wolf”.1 This moment out of time, on the limit instant, between the end of the day and the beginning of the night. Armed with her cellphone, she photographies the landscape immersed in a floating state where precise definitions evaporate. Dozens and dozens of pictures are taken with a spontaneous and moving way, in order to never fix the unstable and fragile space. The method, deliberately untamed and uncontrolled, generates the error, the accident, the blur and the elusive.Faults that Sandrine Rondard digs into the matter, into the dialogue of the colors and into luminous edges. Pink, gray, green.
With a malicious smile, the artist says creating her images “ like a filmmaker”. She sets up a decor, lays a framework, directs actors, choses a light, creates an atmosphere, sets in motion a scene. Cinema and History of painting are the two engines of her imagination. From Francis Bacon to Michelangelo Antonioni, through Chardin, Ozu, Doig, Turner or Lynch, every thing is an excuse in the work of the motion of the image. When the decor is set up, the artist involved extras actors, young people, mostly children. These ones, due to their impulsive actions, uncontrolled or even beastly, inject more movement and more freedom. Pictures are then transposed in oil on canvas. There, “colors sing together”. The images are processed frame by frame. The artist creates spaces where the strange can hide itself, the mystery and all that is hidden in the field of painting. Between dog and wolf. This moment, between two temporalities, two atmospheres, two worlds, is full of paradoxes that she explores unabated. A mystery surrounds. Juveniles figures are not identifiable, too far away, seen from the back, dives in the dark, masked, agitated. It is impossible to project ourselves in a face, eyes will steal. Elusive bodies act such as chimeras that appear and evaporate. Alternately accompanied with animals or incarnating themselves animal figures, they strangely marched between wildlife and modern life.
We go to the hidden place
Whether rural or urban, the landscape is both a refuge and a scary space or alienating. All the ambivalences are permitted : reality and fiction, abstraction and figuration, innocence and cruelty, sophistication and brutality, light and obscurity, life and death. The works take us into what Sigmund Freud called the uncanny (Das Unheimliche). Sandrine Rondard carries out a form of reinterpretation of the tale genre, at least what it arouses in the collective imagination. She injects in her paintings all the ingredients of the tale : a setting, characters, the beginning of a story, a trouble, a fantasy, and a hint of humor. Paul Auster says : “Such is the function of the tale: take the listener by suggesting something else, to see what he has before his eyes”. 2 Two kids wear capes and animal masks, they look at us fixedly. Another stands in the back, under a tree lit by a multicolored garland. An isolated cabin in a meadow. A little figure hidden behind a thin tree trunk. Tale is a transtemporal material that generates images, metaphors and storytelling. If she plays an important role in the interpretation of painted works, the artist takes away however every moralistic, Manichean or dogmatic sense. She maintains the confusion by emphasizing silence and hallucination. The works show an highly personal interpretation to which is added a strong cinematographic dimension. a car from the forest. Full headlights, a car comes out of the forest. Passionate about cinema, Sandrine Rondard transposes, in real images, an unreal light, a dramatic intent, a disconcerting meeting, a movement, a melancholy appearance, a tension. She walks then along an edge fed with ambiguities, dipping in a space both real and fantasmagoric, full of contradictions, an extremely dense space through which she explores the strangeness facets of human being. The uncanny is the thread of her imagination where each work can be seen as an extract from a story, a narrative primer, a cinematic and pictural storytelling within which delight and discomfort intermingle.
1 - Artist’s quote are extracted from an interview dated on june 2016.
2 - AUSTER, Paul. The invention of Solitude. Arles : Actes Sud, 1988, p.186.