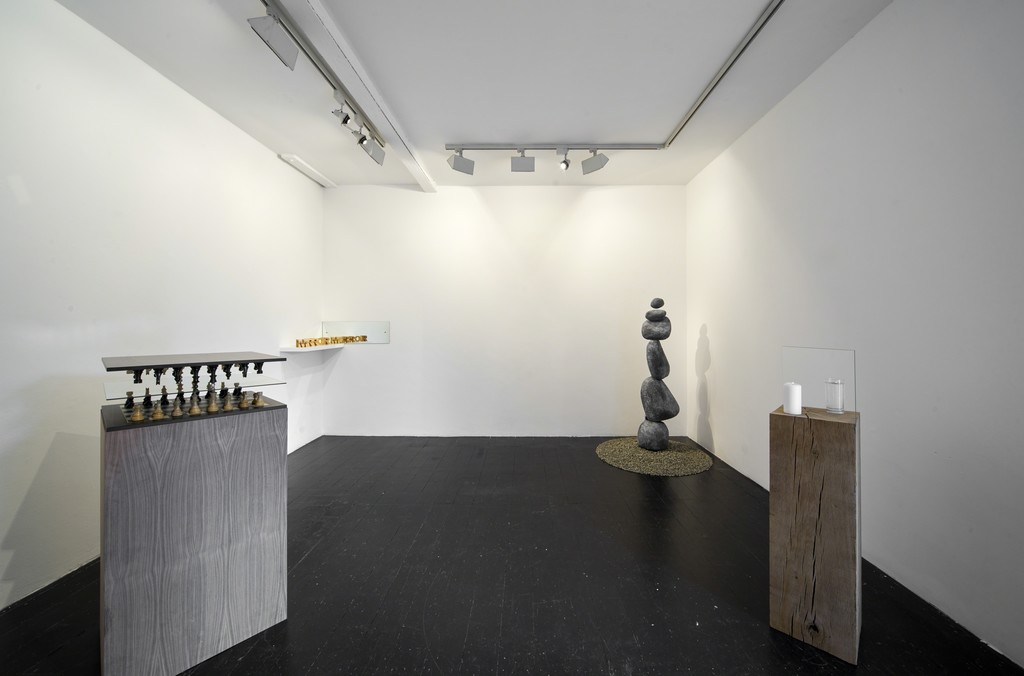 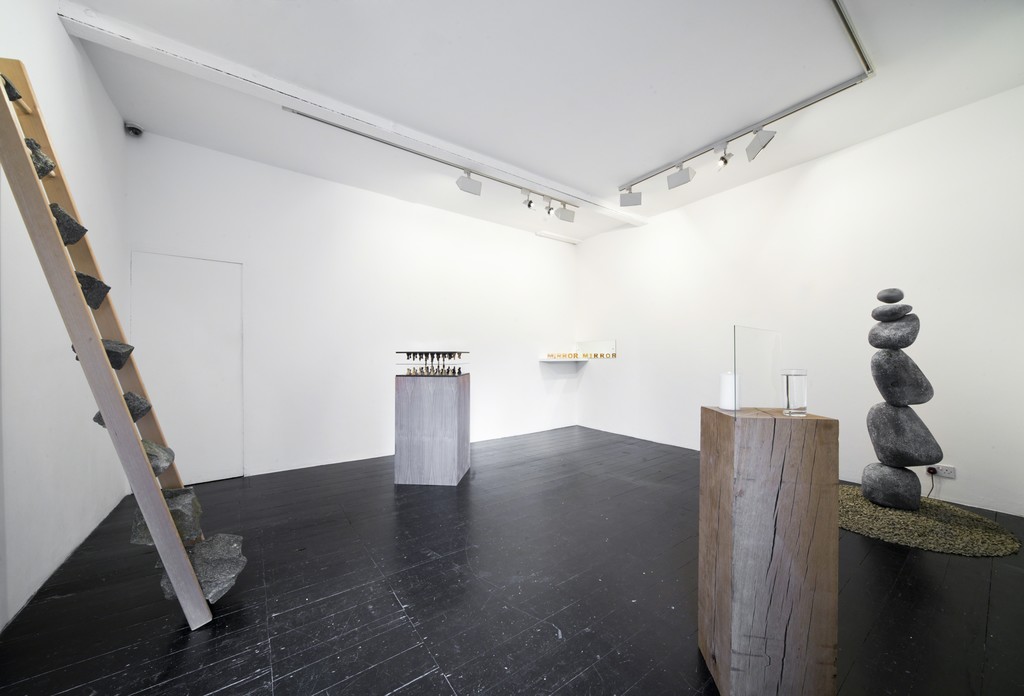 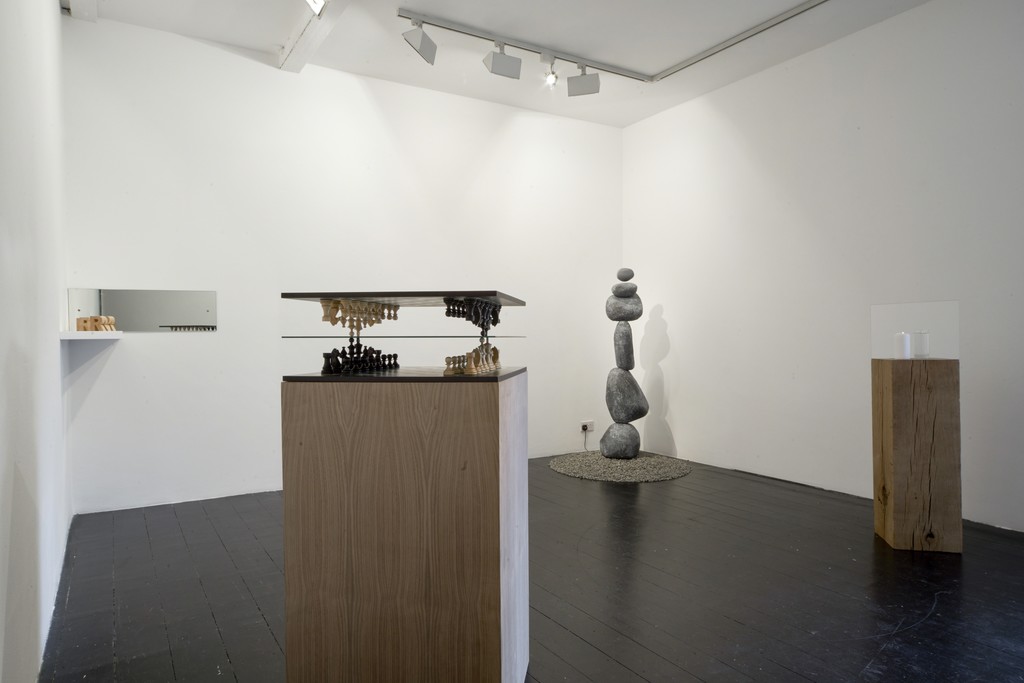 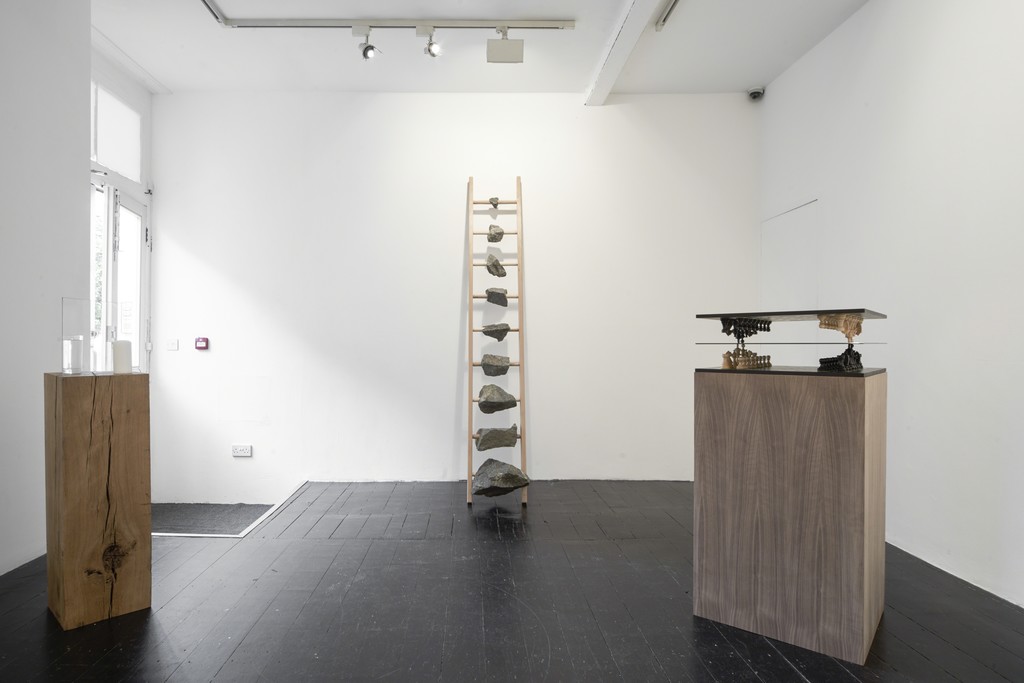 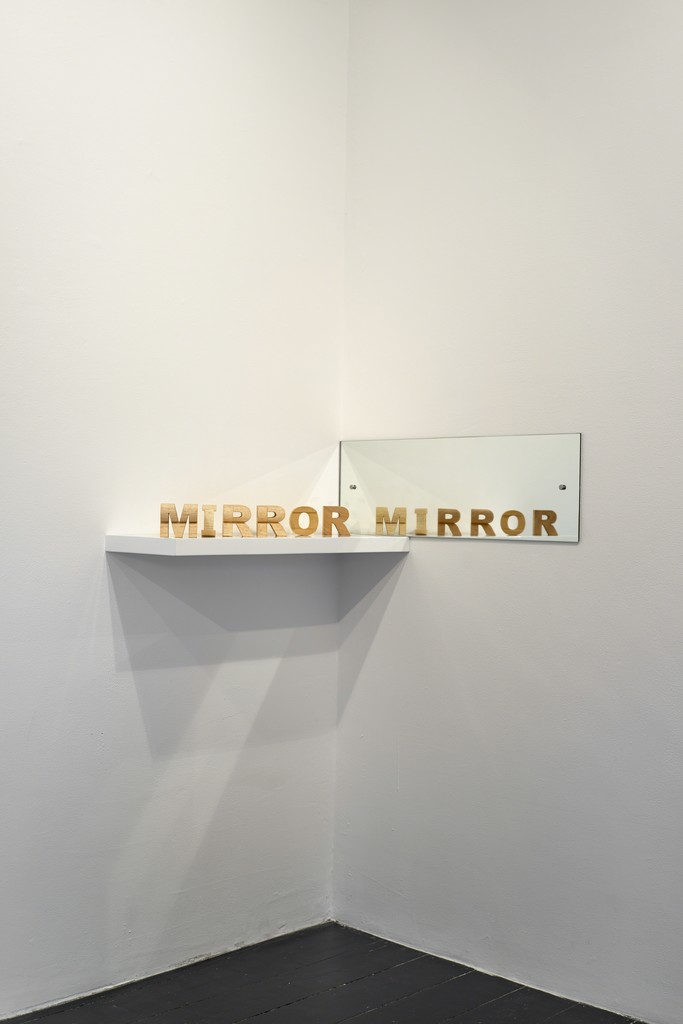 James Hopkins typically effects a double shift through the poetry of objects. First, we wonder at a contradiction achieved. How is it that one thing is turned to its opposite – black into white, heavy into light, word into antonym, abstraction into representation? The puzzle provides an instant diversion, and the answers - double reflection, magnetism, tricks of balance, anamorphosis - are interesting in themselves. But then comes the second shift: what does the paradox and deception tell us about the world? First, that our senses can deceive us: the world may not be as we assume. And Hopkins has often used these methods to update the tradition of the vanitas motif, in which objects remind us of transience of life: for all the entertainment, there is an undertow of mortality. The artist has resembled a western analytical philosopher pointing out the structure which lies behind appearances. Those epistemological resonances take on a more eastern flavour in ‘The Mirror’s Mirror’.

Scaled Ladder is freighted with integrated rocks, their size diminishing with height. We instinctively sense a logic to this arrangement, though it's hard to pin down. Is it that. as science tells us, as most easily seen when repellent liquids are mixed, that whatever is lightest will rise? Perhaps not, as those rocks have similar density. Is it that the relative mass of the mountain as you climb it is echoed by the stones’ sizes as we imagine ascending the ladder? Is it the more semantic point that, as Hopkins says, Scaled Ladder encompasses the dual meaning of 'scale' as a fundamental concept of sculpture and reference to the diminishing size of stones, with 'scale' as the act of climbing a summit? There’s also a rather positive spin on the vanitas: these tombstones, it seems, fail to prevent us rising to the ultimate high place.

Lull presents two full chess sets in starting position, one inverted. Are we invited to play a complicated variant akin to Star Trek’s 3D chess? Drawn in to look at how the armies clash in this version of the war game, we find through mirroring that the white forces turn black as we inspect them, just as the black forces turn white. Perhaps we can set aside conflict, if only, as the title suggests, for a while. In the vanitas context, here’s a stay against death. But we are also in the territory of yin and yang, of asserting the oneness of all creation in the face of dualistic worldviews which stop us seeing apparent opposites as part of a whole.

The same might be said of Inner Light, which majestically marries fire and water. Again, opposites are paradoxically united: the Victorian theatrical device of Pepper's Ghost (typically used to reflect the contents of an off-stage room into the on-stage space by means of an unseen diagonal of glass) persuades us that a glass of water is burning like a candle. Given the show’s focus on the afterlife, we might be reminded of the philosophical question of whether the mind can be separated from the body, and its implications for how we might understand life after death - after the flame has been snuffed out. To quote the Taoist summary of Chang Tzu (399 - 295 B.C.) : ‘Life and death are one, right and wrong are the same’.

Stoned Turn - Turned Stone is a pile of cairn stones, part of an ancient tradition, set as if in a Japanese garden. Hopkins says he aims ‘to convey a certain Zen like quality in relation to a higher state of, being, clarity, lightness and levitation’. Appearing almost weightless in disobeying the normal forces and laws of gravity, the sculpture exudes a sense of meditative calm and internal coherence, which derives from a discovery of the ‘impossible’ exactitude of balance - which is taken to another level by the uppermost stone, which hovers unsupported. One can imagine worshippers paying homage at such a monument, perhaps seeing that floating free of the uppermost stone as representing the soul leaving the body.

Those four sculptures create a meditative environment with philosophical dimensions not fully graspable in words. Modern philosophy, though, is often explicitly concerned with the analysis of language. Hopkins engages with that, too: he has made mirror pieces in which words are turned into their opposite (eg ‘love’ becomes ‘hate’) by setting up the reflection of three dimensional letters from different angles. That suggests another reference to our natural tendency to make the world binary, but Mirror Image reinforces that from the other direction: its apparent repetition is actually a natural contradiction contradicted, and hence denied. Everything, we might reflect, appears to be unified with its opposite – even opposition itself.

Hopkins often builds in references to other art as a way of deepening the resonances in his own work. That is seen most generally in his adaptation of the classical elements of the vanitas still life. This specific group includes a candle, very much a part of that tradition, and more recently updated to effect by Gerhard Richter. Hopkins' use of boulders may well remind us of Richard Long (in the ladder) and Lee Ufan (in the cairn), two other artists with a meditative bent. Those stacked stones also call to mind Fischli and Weiss's early photographic series Equilibres / Quiet Afternoon, 1984, which show implausibly balanced arrangements of fruit, vegetables, kitchen utensils and tools at what we take to be the point just prior to their less than quiet collapse. The combination of chess and art is bound to trigger a connection with Marcel Duchamp, but the subversion of black and white more specifically echoes Yoko Ono's White Chess Set, 1966, another way of dissolving the game's oppositions. Hopkins’ reversals of semantic logic, and Mirror Image’s double reversal, play on Bruce Nauman’s neon combinations such as Eat Death, 1972. It’s in that spirit that ‘The Mirror’s Mirror’ set out five works in a quincunx. Five was the number favoured by James Lee Byars, who was fascinated with the idea that ‘five points make a man’, as they can be taken as the five extremities of head, hands and feet, which Byars represents, for example, by crystals.

So what manner of man does Hopkins make here? One who reflects on art and illusion, presence and absence, division and oneness, life and death – but inscrutably. To return to Chang Tzu: ‘the mind of the perfect man is like a mirror. It does not lean forward or backward in response to things. It responds to things but conceals nothing of its own.’