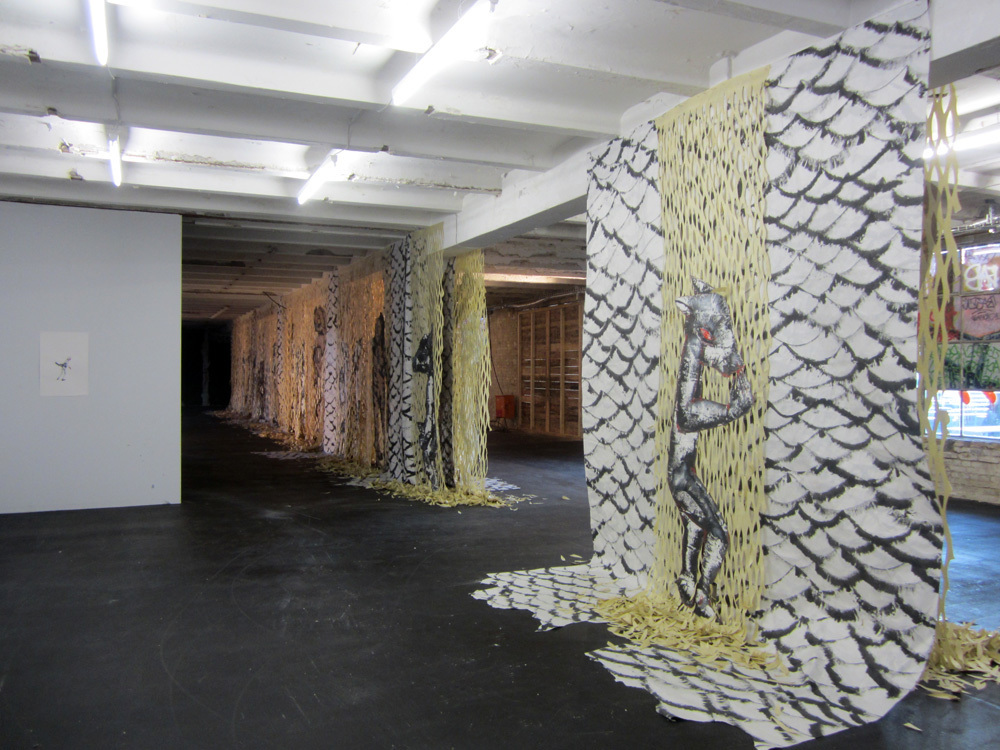 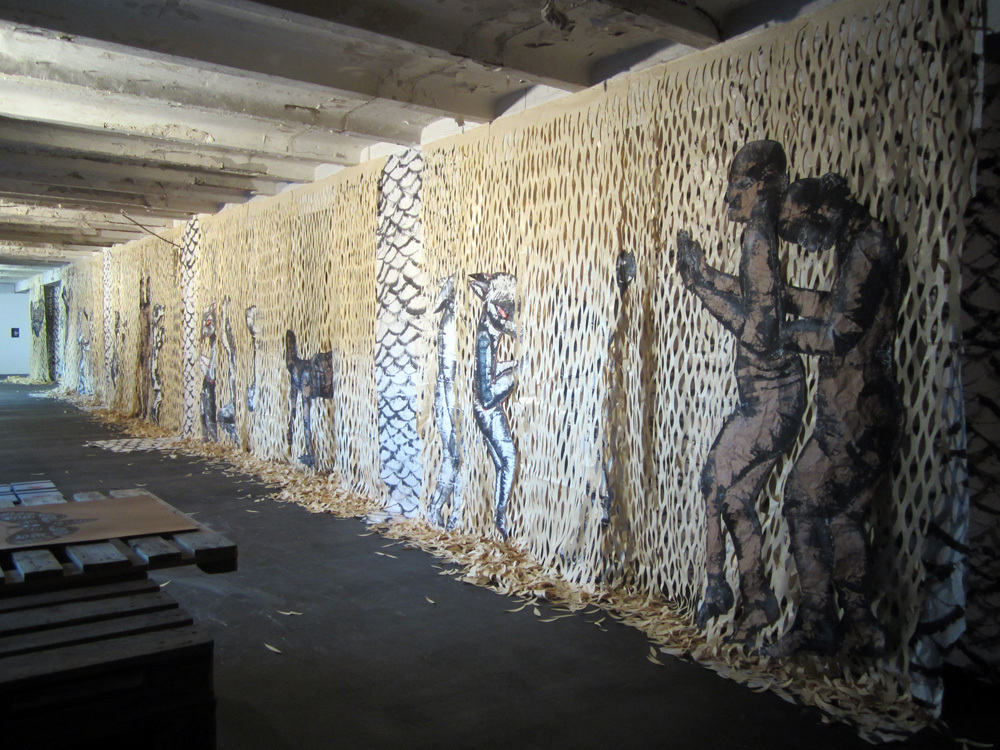 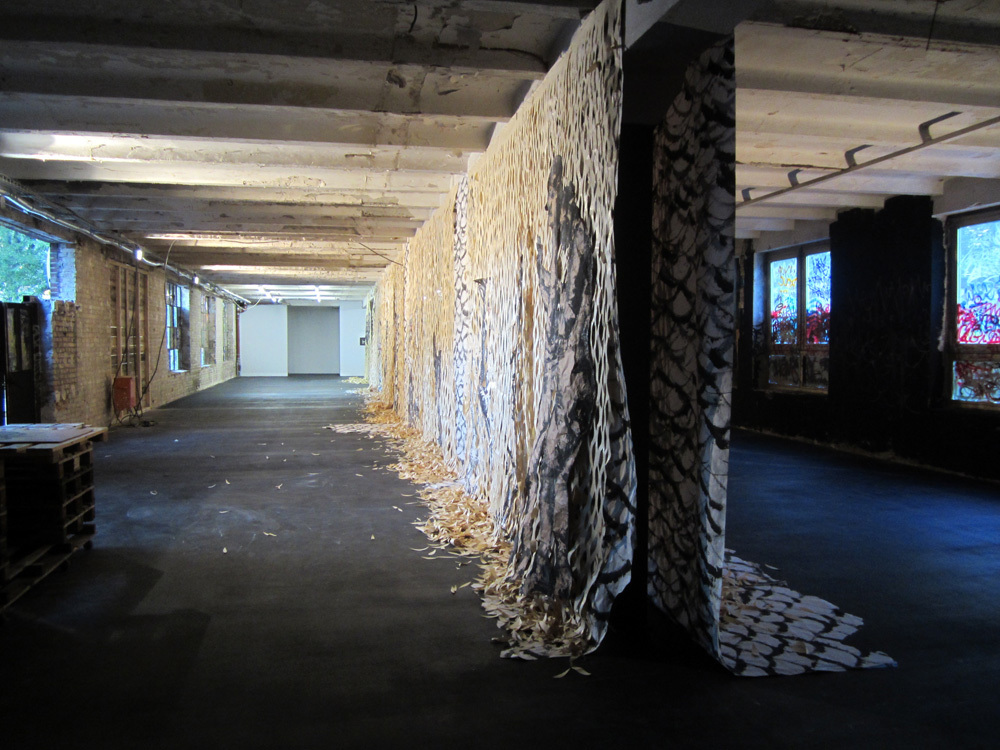 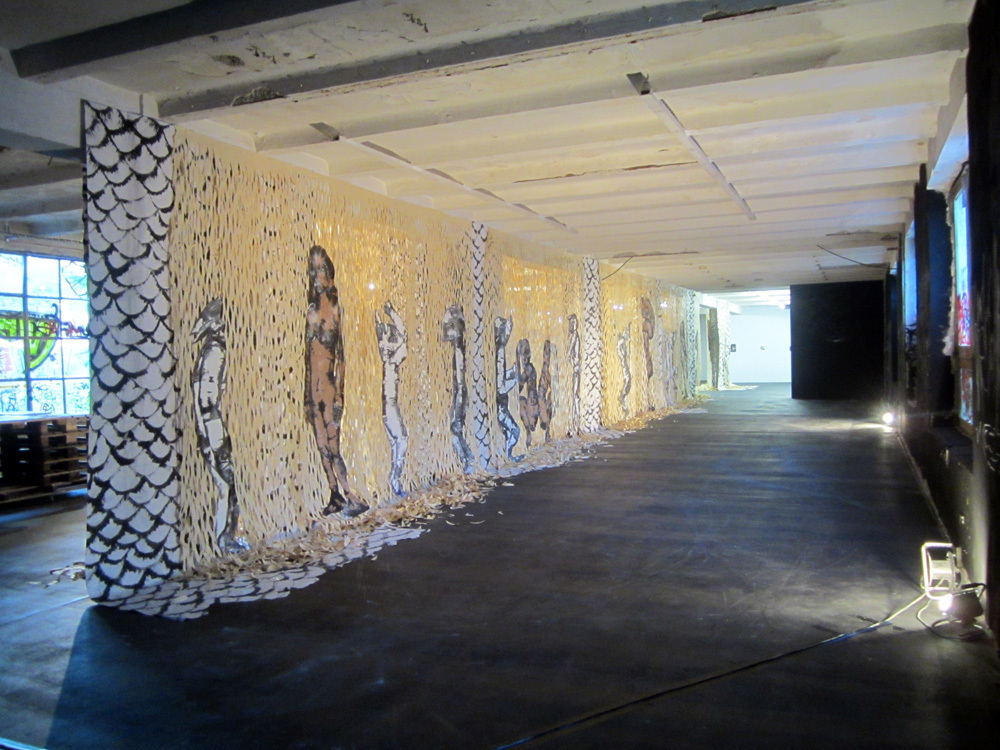 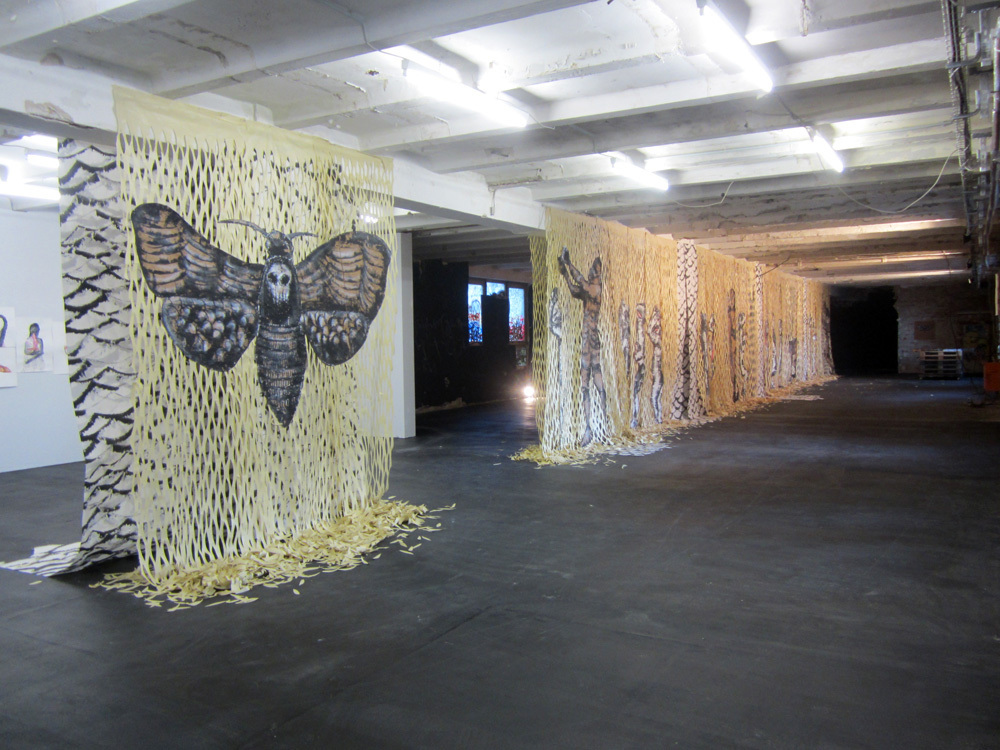 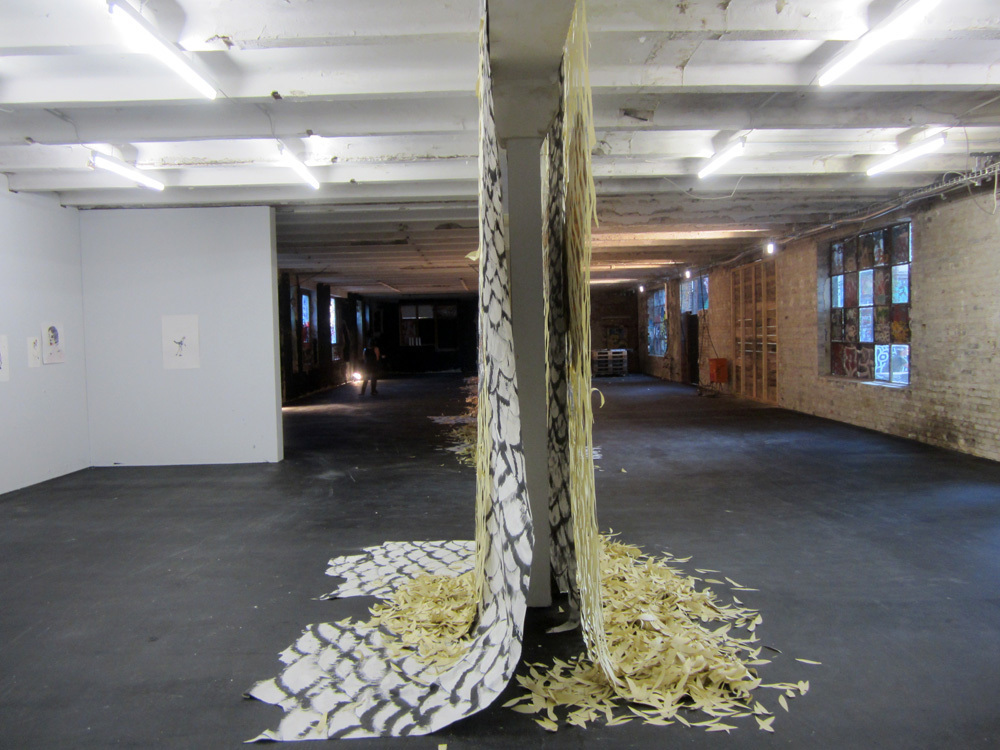 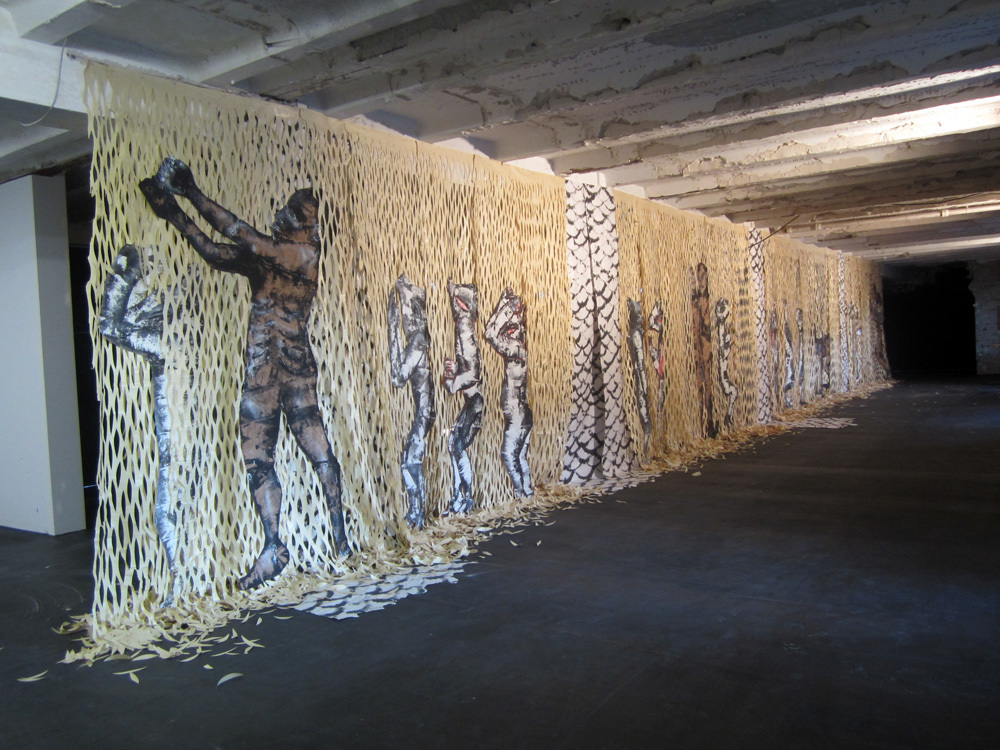 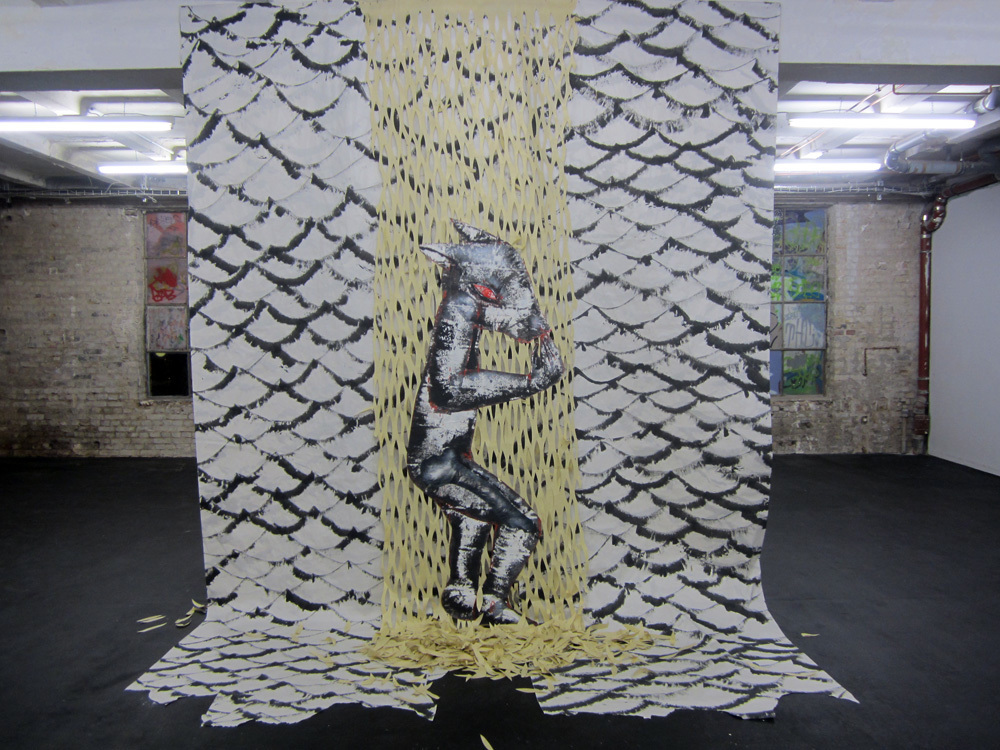 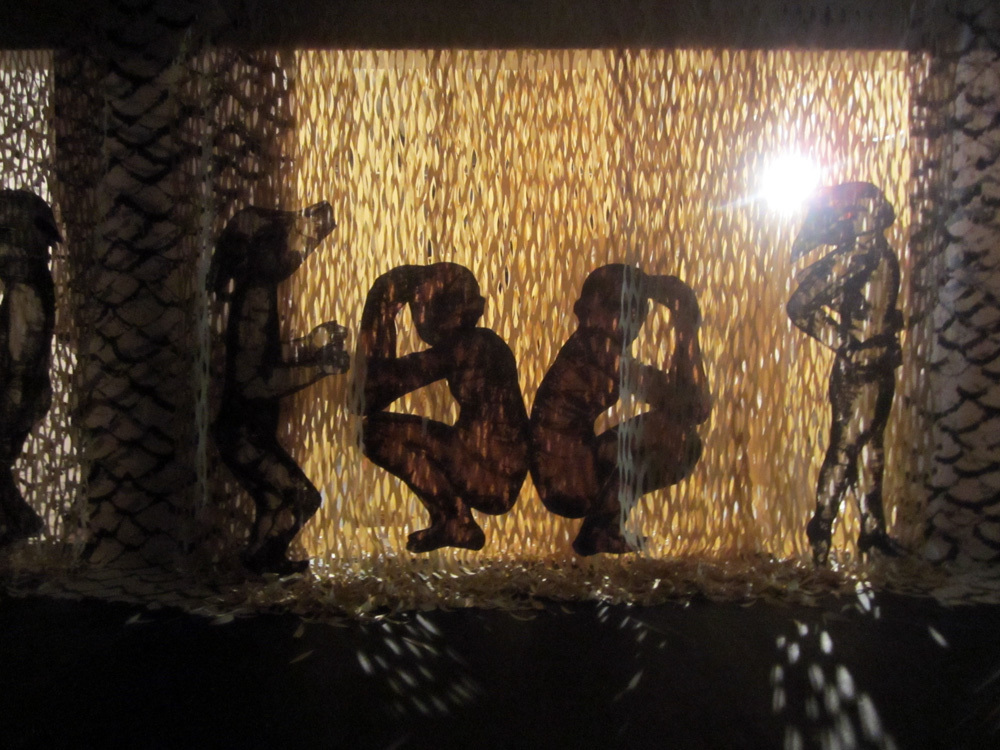 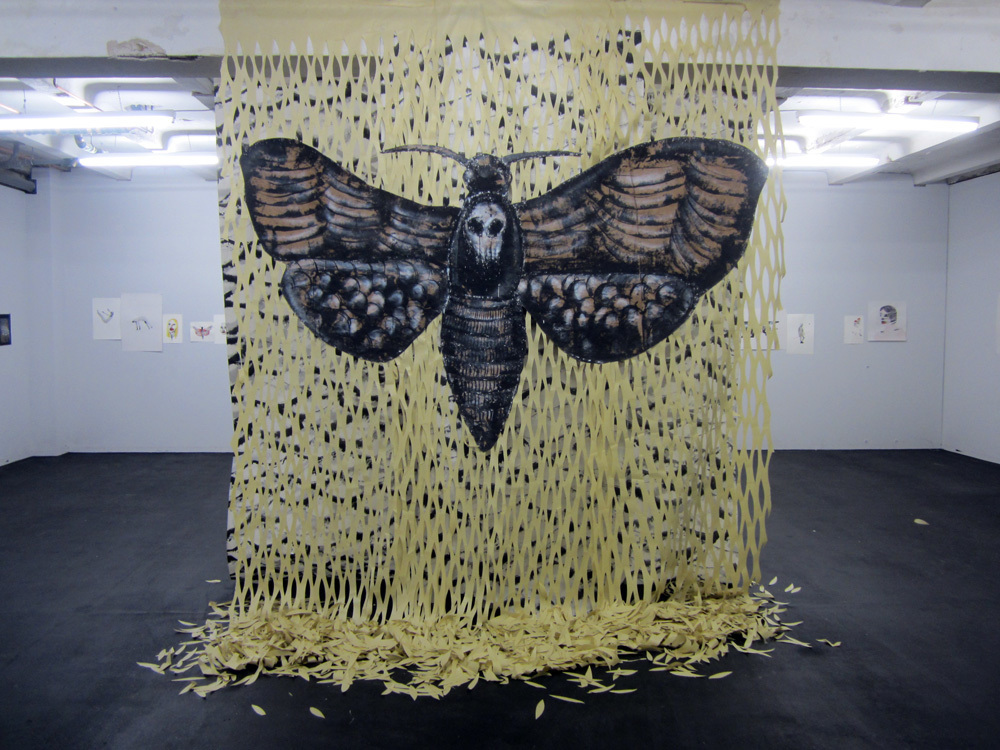 Titled NEW LAND (we need new land), the solo exhibition by Klone is built around a 50-meter long paper installation and a selection of watercolors, ink drawings and collages, made in Tel Aviv and Berlin in the course of spring and summer 2012.

Klone is well known for his graffiti and spray-painted murals that adorn the derelict parts of Tel Aviv and other European metropolises, a body of works that represent the outside part of his artistic expression.

Over the years, in parallel to his outside work, Klone has developed a more intimate practice with watercolors, drawings and collages, which form the inside part of his artist’s personal and complex universe.

Rooted with distorted, lost memories from his childhood in the USSR, shaped by his street work and acute perception of the environment, his artwork reflects his obsession with duality, multiplication and transmutation, adorned with eerie mythological bestiary and ubiquitous spirits.

The exhibition plays on three levels:

NEW LAND (we need new land) is a contemporary fresco in the manner of the ancient Egyptians. Telling the urge for creation and a need for mankind to reinvent itself in a world that looks no longer infinite, Klone’s vision intertwines human bodies with his famous Predator characters, in a biblical interpretation of confrontation, transmutation, and renaissance.

Sons born out of chaos.

Waves of memories glide along the installation in the background, while paper cut-out leaves peel off on the ground.

Klone’s inner side. Collages, watercolors and drawings are part of the artist’s most intimate expression. Unlike the installation, they are fragile bits of memories, remnants of childhood collected through old photography books, distorted portraits of woman and eerie animal characters. The central character of the moth (queen, mother) is represented twice in watercolor format.

Some of the artworks were prepared in his Tel Aviv studio when he was creating material for the exhibition. Some of the works were created in klone’s atelier at Urban Spree during his residence in Berlin before the show. The watercolors and drawings realized in Berlin are more about movement and reflect the strong energy carried by the German capital city which klone wonderfully captures.