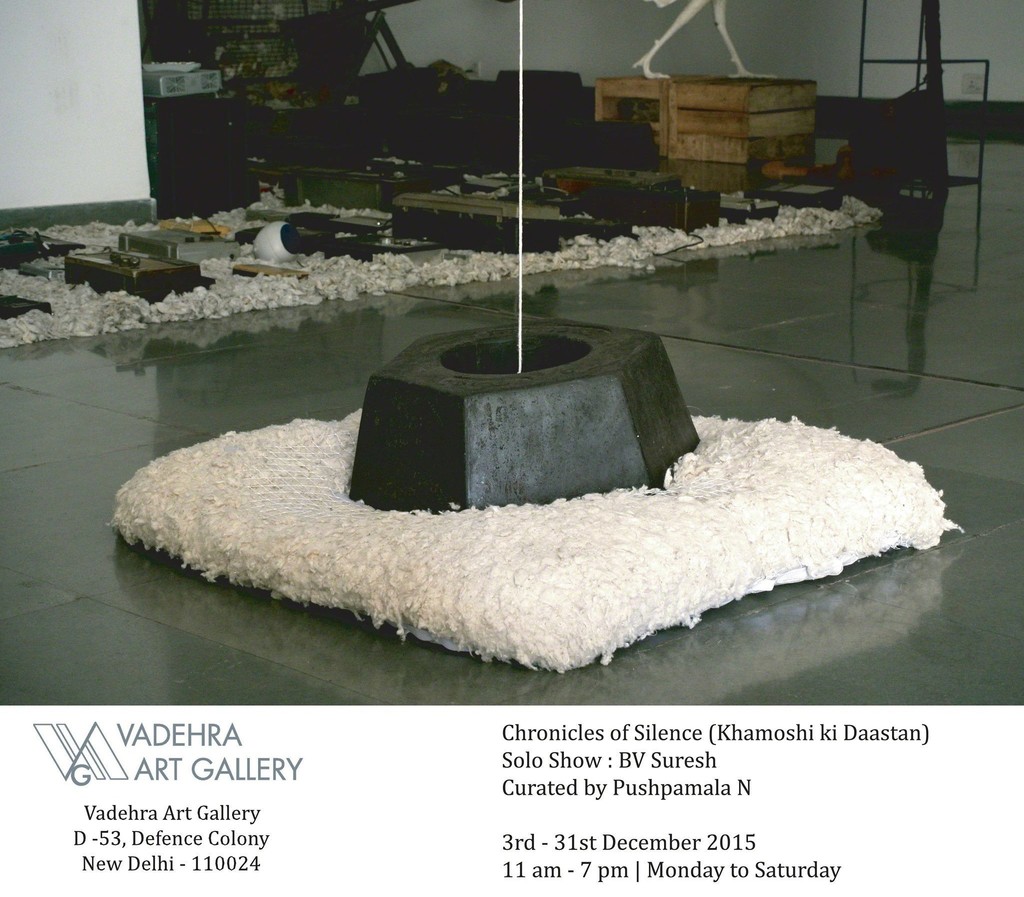 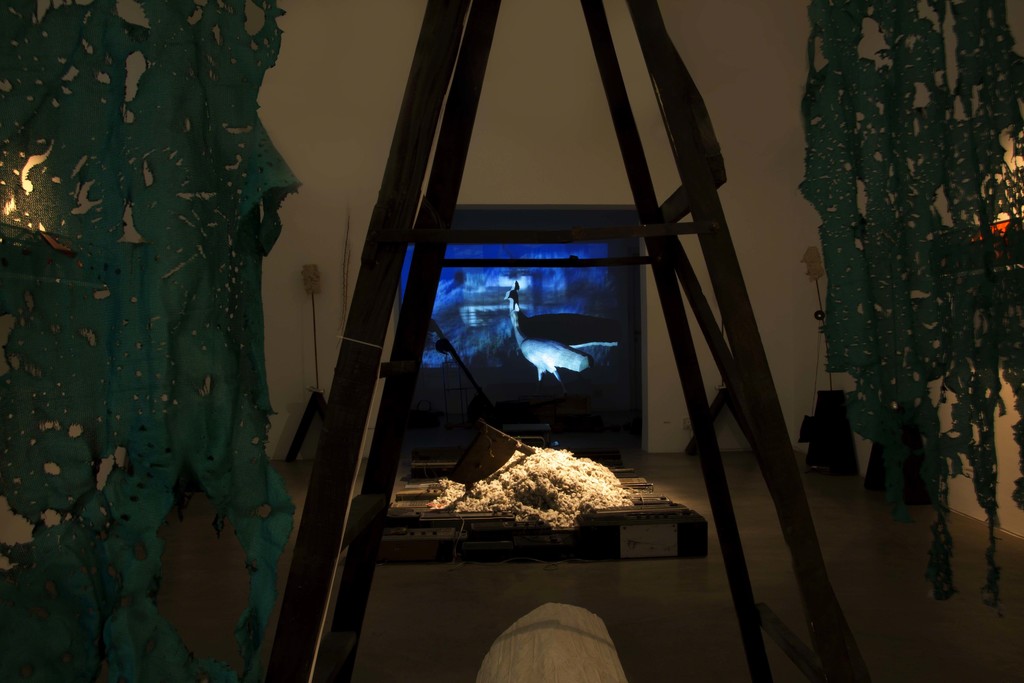 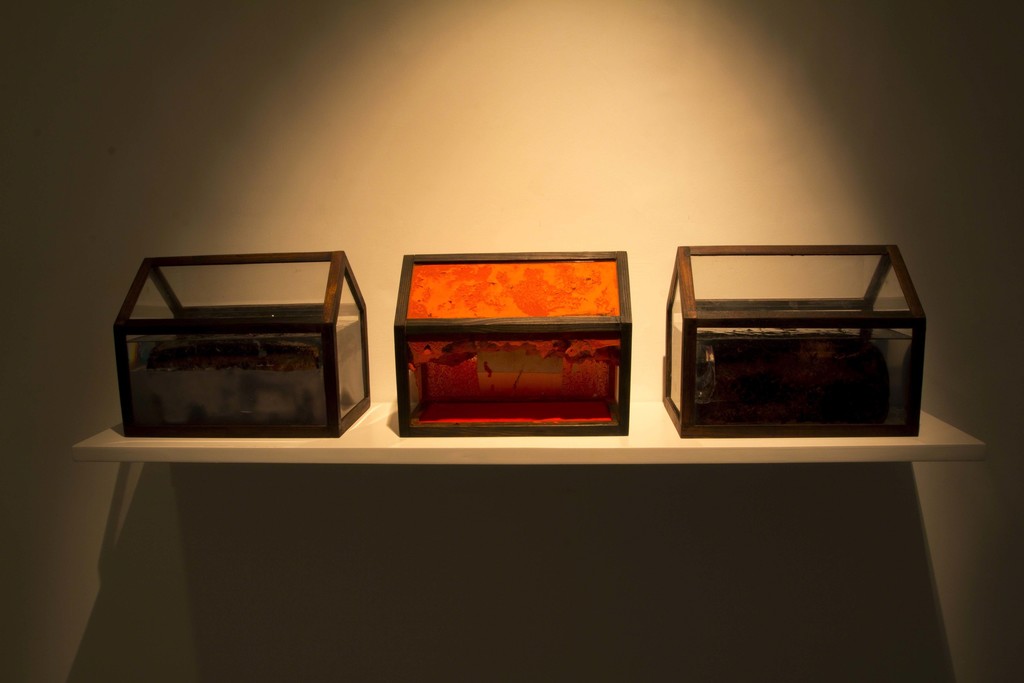 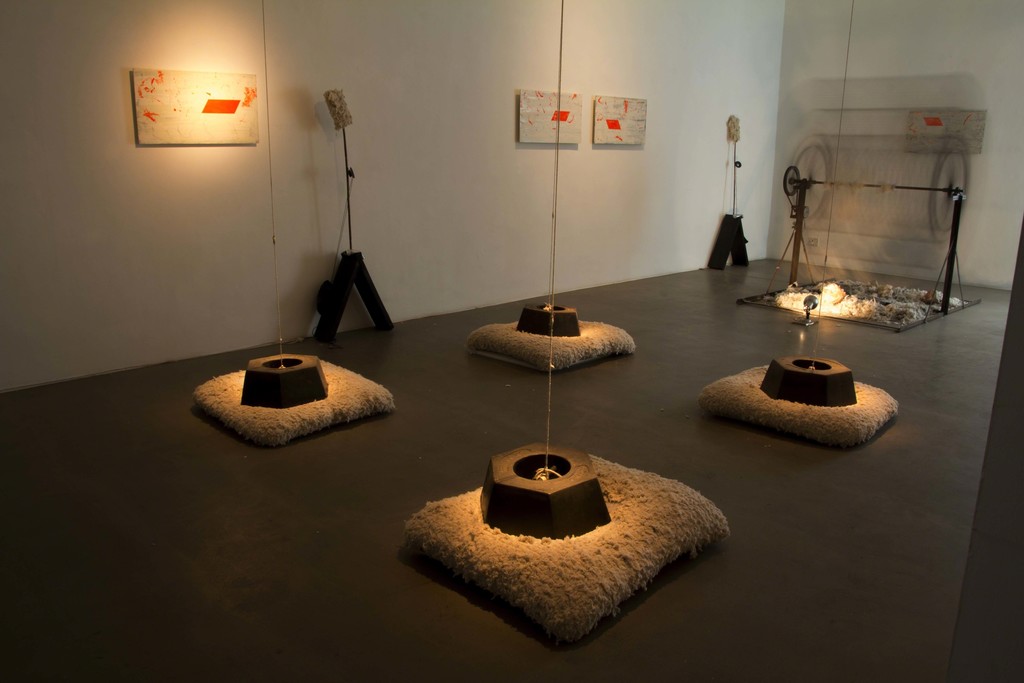 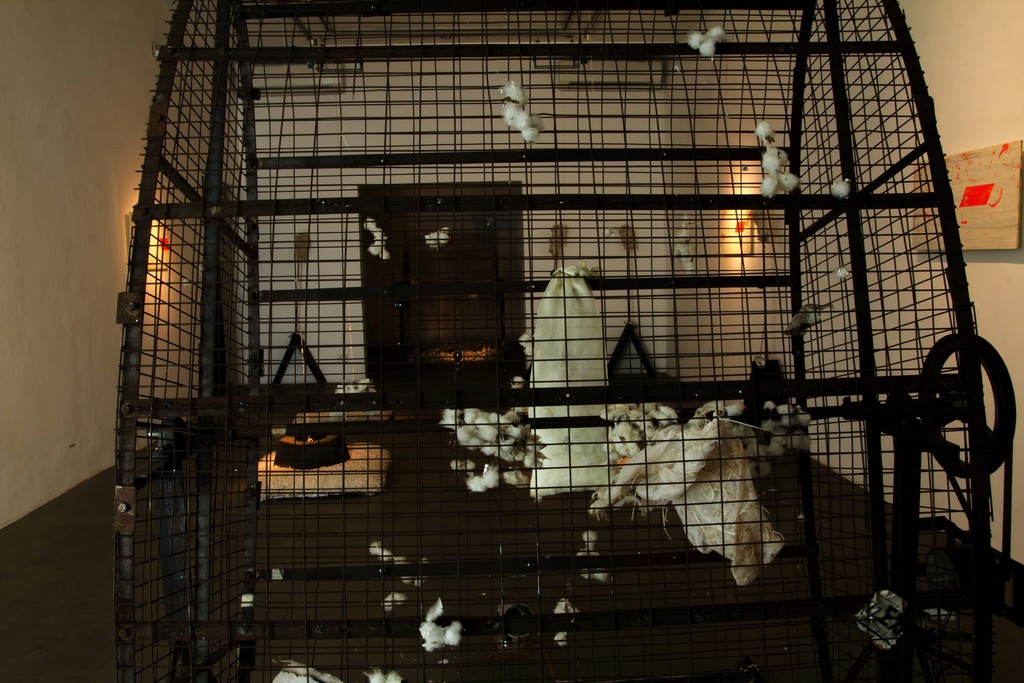 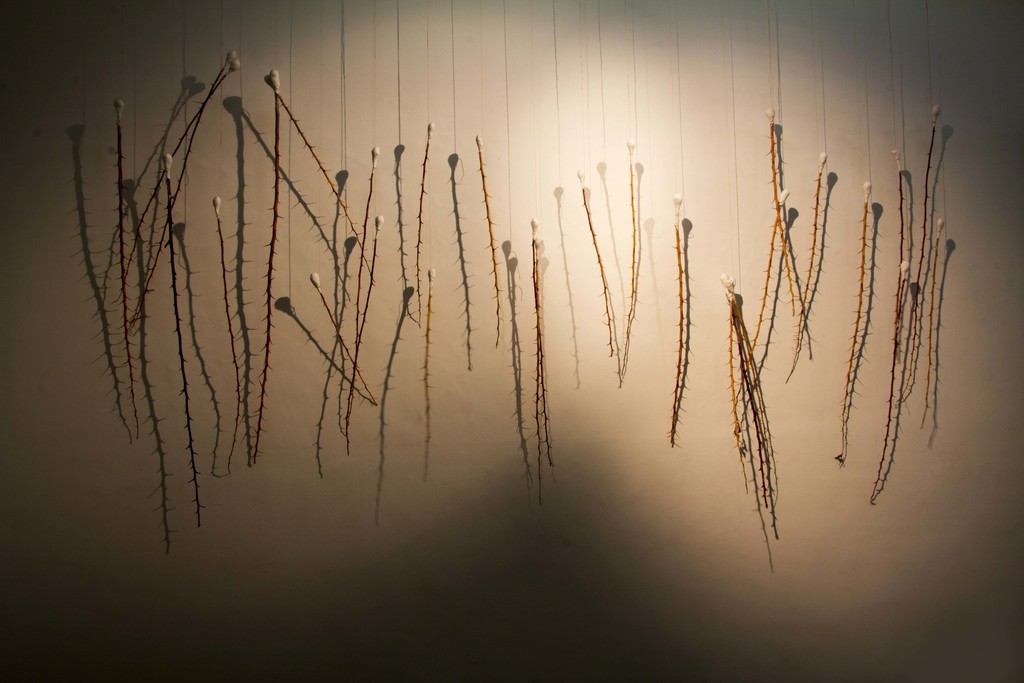 Chronicles of Silence (Khamoshi ki Daastan) is an intermedia installation by BV Suresh curated by Pushpamala N, a well known artist herself. This is Suresh’s second solo at the Vadehra Art Gallery, where he will be presenting an array of multimedia sculptures that have come to define his works.

Curatorial Note
Pushpamala N
In his second solo at the Vadehra Art Gallery in Delhi, BV Suresh transforms the gallery space into a spectacular if dystopian landscape of the contemporary, creating a veritable ‘Animal Farm’ of grunting and snuffling pig noises, radio speeches, kinetic machines, crashing weights, radars and laser beams. The sculpture of an albino peacock presides over the whole thing, a blanched version of the national bird: the picture of an ‘outsider’ whose body is washed by the colors of hypnotically flickering video images while bits of cotton and feathers fly around. The work reflects with anger upon the place of the farmers, the minorities, the dispossessed and the outsiders in our world today.
Mechanized cotton gins, cotton beaters, torn garden nets, and modified versions of agricultural grain separators filled with feathers tumble, beat and rotate, casting great shadows on the walls. A hundred old radios placed on a bed of cotton blare forth the talks of the Leader, alternating with interviews of farmers. The old fashioned radio, famously close to the farmer and known to broadcast agricultural programmes chatters on its own - activated by sensors, oblivious of distress. Banks of scarecrow-like figures fitted with speakers make obscene porcine noises. The white peacock is overwhelmed again and again by brilliant landslides of cotton heaps, while weights crash down with raucous shrieks. The installation pulsates like a satirical ‘sound and light show’ about darkness.
Since more than a decade B V Suresh has been intensely engaged in reflecting on the place of the minorities, dispossessed and marginalized in his paintings, videos and installations. In 2006, this resulted in a major exhibition Facilitating the Beast held at the Vadehra Art Gallery in Delhi which was a large installation around the metaphor of burnt bread, addressing the communal violence of 2002 in Gujarat. In the present exhibition, some of the burnt bread loaves made nine years ago in a local bakery are preserved in resin in little glass houses, and hung up with other miniature houses containing landslides of florescent saffron. Suresh as ‘artist-chronicler’ collects and distils these memories of the unspeakable.

About the Artist
BV Suresh
B V Suresh is a rather elusive artist: though always seriously engaged in art making, his solo shows are rare. One of India's important artists Suresh works like a poet, creating intense metaphors out of ordinary objects. His paintings, installations and videos are adventurous in scale and intent. With their strong imagery and technical mastery, they make unambiguous statements about contemporary life, society and politics. Suresh was born in Bangalore and studied painting at Ken School of Art in Bangalore (1978) and completed his diploma and post-diploma at the Faculty of Fine Arts, Maharaja Sayaji Rao University, Baroda, in 1985. He later went on to do an MA in painting at the Royal College of Art, London, on an Inlaks Scholarship where he studied under Peter De Francia and Ken Kiff (1987). His artistic life extends beyond studio practice into teaching, theatre design and children’s book illustration. BV Suresh is Assistant Professor of Painting at the Faculty of Fine Arts, Maharaja Sayaji Rao University, Baroda and lives and works in Baroda. His work has been shown in important exhibitions in India and internationally.