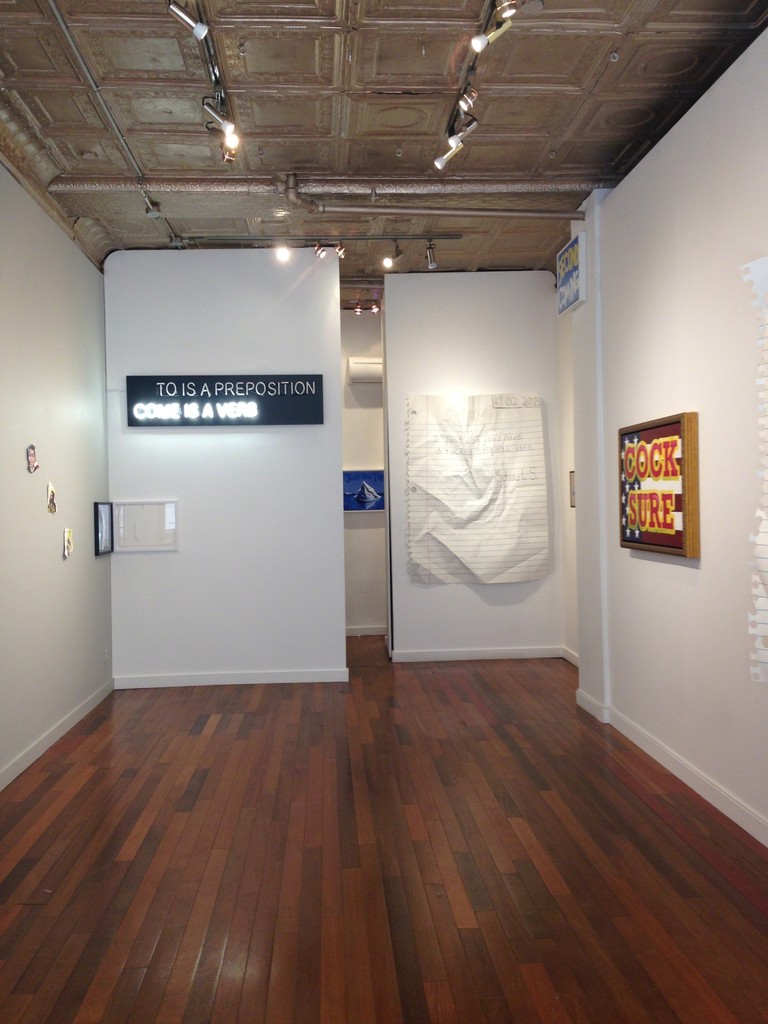 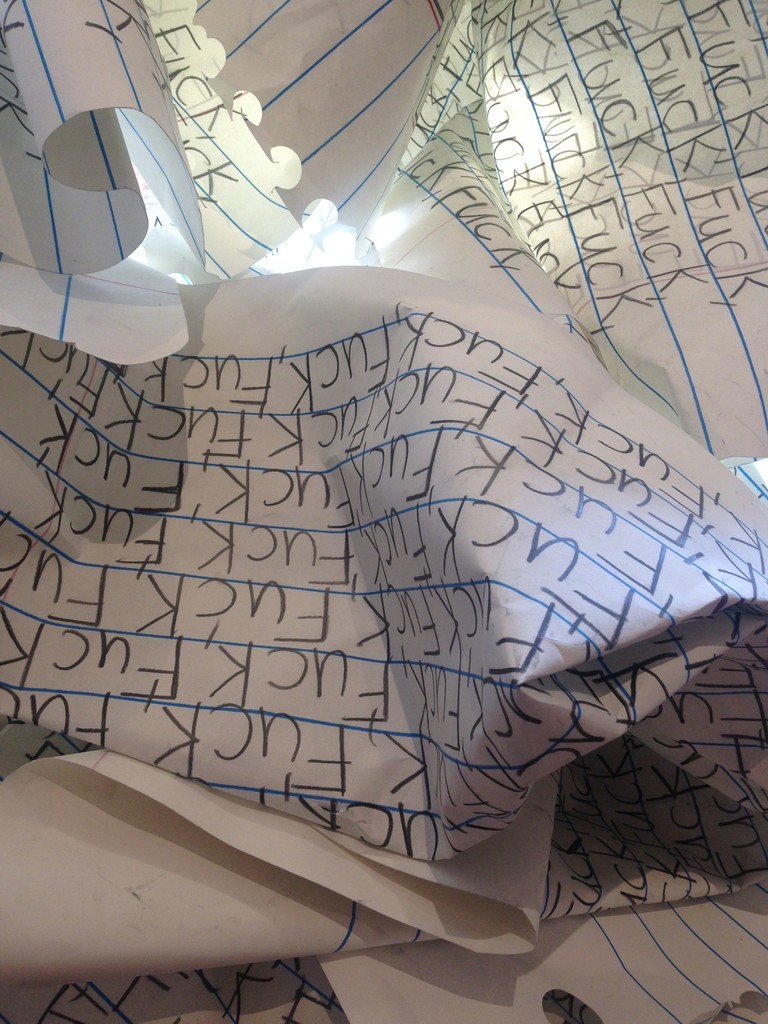 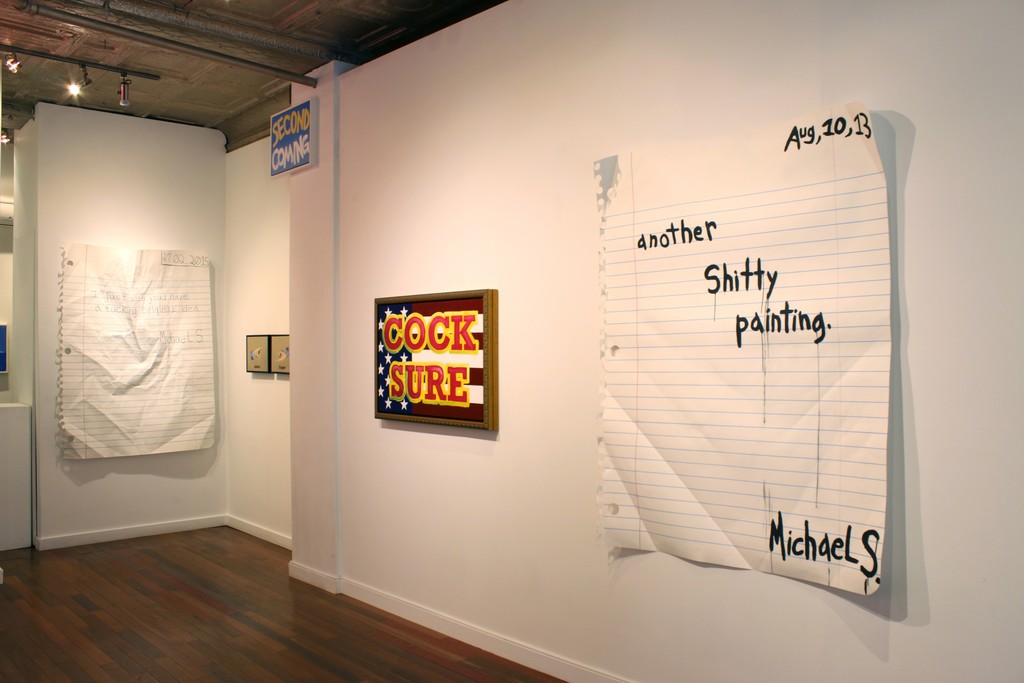 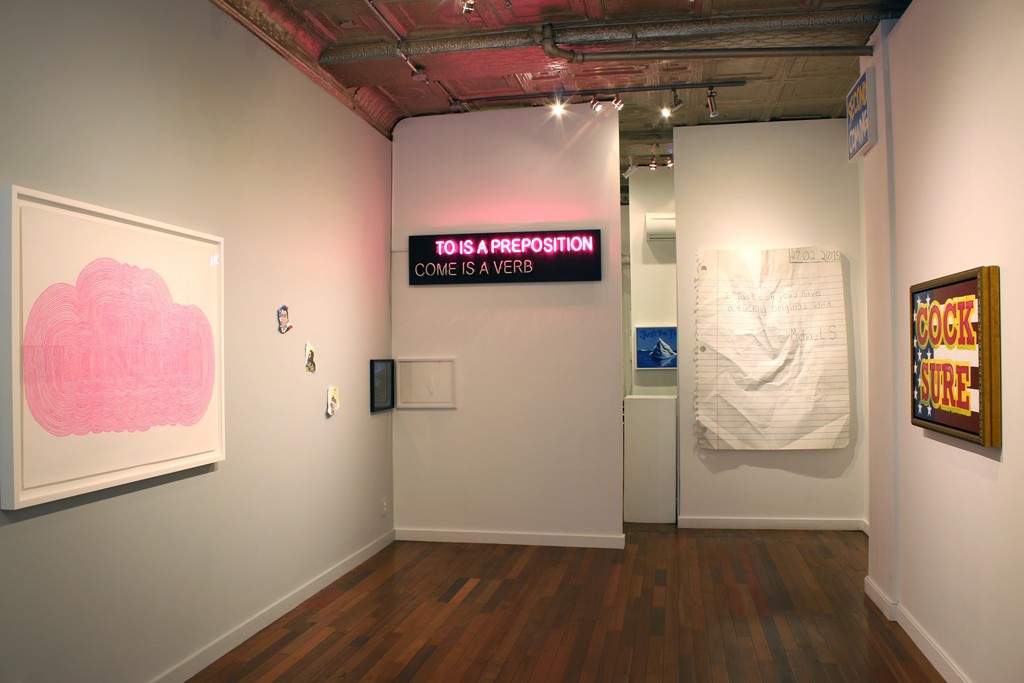 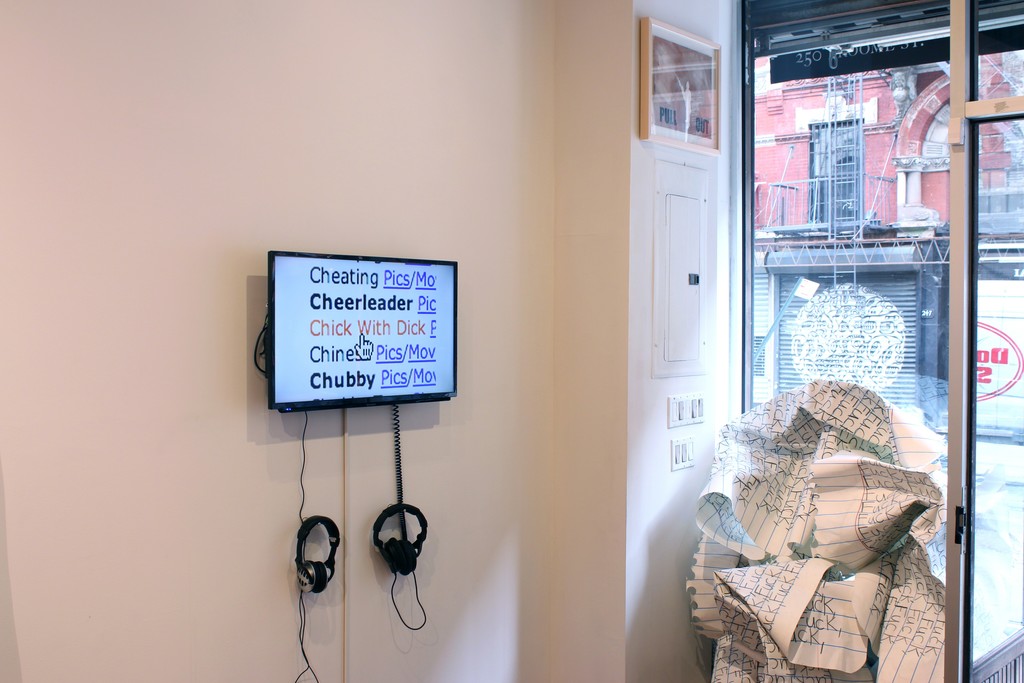 (New York, NY) --- VICTORI+MO, in collaboration with Catinca Tabacaru Gallery, is pleased to present Dirty Words, a two-person exhibition featuring works by Joe Nanashe and Michael Scoggins. This exhibition explores the aggression and sexuality ingrained in modern vernacular and inherent within American culture. We are repeatedly confronted by double entendres, and have become increasingly reliant on context and source in order to absorb true meaning. This content, often fraught with messages of fear, submission, superiority or surrender, hold various truths depending on their intention and ultimately fall on the perceptions -- or lack thereof -- of the audience.

Nanashe and Scoggins, both known for their appropriations of art history and pop culture, each use child-like aliases to present their work -- “Joe” and Michael S., respectively, which seamlessly weave into the unpretentious formats they choose. The artists’ usage of innocent and non-threatening imagery engages the viewer to explore darker and more complex issues. They use language as a means of confrontation, creating a hypersensitive awareness between the viewer and the artist. Communication is superficially cordial, but is an inherently aggressive act intended to inform, influence, coerce and control.

Within Nanashe’s phraseology, idioms such as ‘Full Penetration’ and ‘Pull Out’ are typically associated with male domination and conquest, whether used in competitive sports, warfare, or sexual situations. Asserting dominance is an animal instinct and humanity adopts this practice by translating it into a political and racial context. Nanashe is heavily influenced by the abstract nature, perception and structure of language, and how it affects the ways in which we think. In this exhibition, he questions banal expressions that are often used in conventional conversation and the sexual undertones implicated from them. Appropriating a line from the infamous 1960’s beat comedian Lenny Bruce, Nanashe’s piece “To is a preposition. Come is a verb” is a seemingly trite grammar lesson. However, when the phrase is combined, “TO COME” becomes something dirty.

Scoggins’ youthful drawings on meticulously created sheets of aggrandized notebook pages, addresses notions of innocence, adulthood, and the complexities of growing up. He approaches the emotions connected with success and failure though a sense of nostalgia. In these works, Scoggins conjures up frustrations and the use of curse words as a mental and emotional release through the perplexing iterations of a child. His sculptural piece “No More Fucks to Give” is literally the word ‘Fuck’ written repeatedly on crumpled sheets of paper and thrown to the ground creating a false sense of indifference. His “Confused Conservatives Living in the Contemporary World” series are a group of caricature drawings that illustrate the ridiculousness of white supremacist groups and ideals. Scoggins combines traditional doodling with text and language in a way that appears simple and familiar but is entirely mindful of the crude communicative landscape that surrounds us.

Joe Nanashe (b. 1979) studied sculpture at the University of Akron. In 2002, he received a scholarship from Sarah Lawrence to study performance art at the Kitchen Summer Institute. He received his BFA and Outstanding Senior Award from the University of Akron in 2003 and an MFA and the Paul Robeson Emerging Artist Award from Rutgers University in 2005. His work has shown in multiple editions of the New York, Chicago and Lausanne Underground Film Festivals. His video, Internet Alphabet, received an Audience Choice Award at the 2008 Boston Underground Film Festival. He has exhibited internationally in Switzerland, Germany, Netherlands, Russia, Canada, and Argentina.

Michael Scoggins (b. 1973) gained an MFA in painting from the Savannah College of Art and Design in 2006 and has attended various prestigious residencies including the Skowhegan School of Painting and Sculpture, the MacDowell Colony, and Fountainhead. Michael has gained international recognition and gallery representation in Atlanta, Miami, New York, San Francisco, Vienna and Seoul. His works have been added to some notable collections including, but not limited to, the Hammer Museum in Los Angeles and the Museum of Modern Art in New York. Michael has had works exhibited in over twenty solo shows, fifty curated group exhibitions, and written about in countless publications.