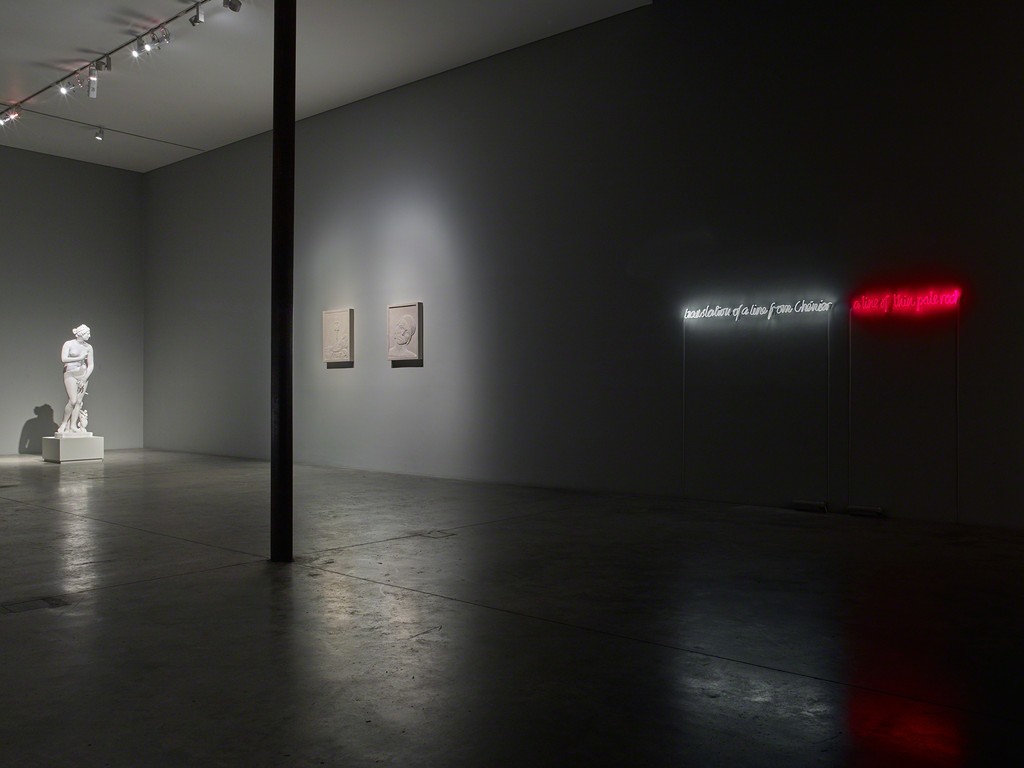 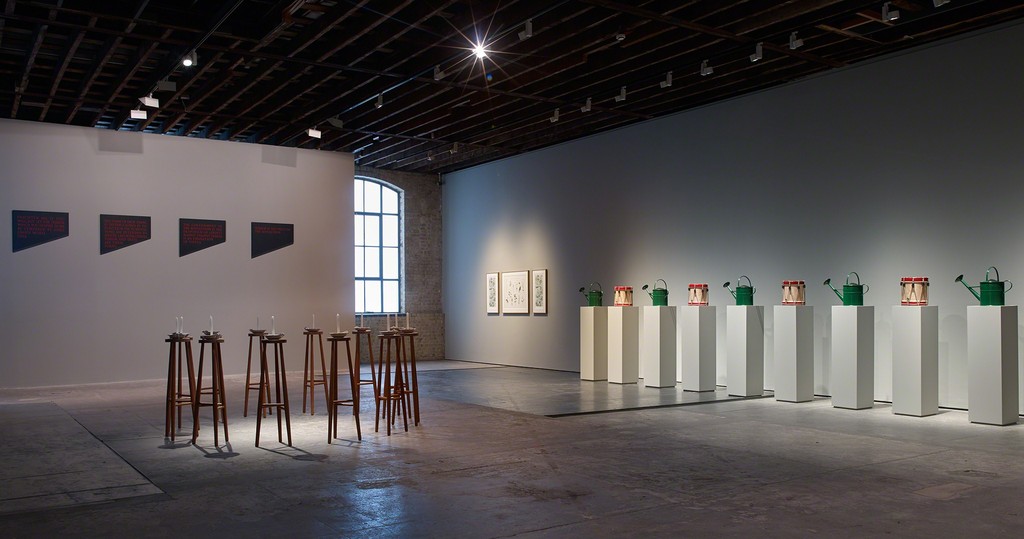 Victoria Miro is delighted to present an exhibition of the work of Ian Hamilton Finlay (1925–2006) marking the 90th anniversary of the artist’s birth. A philosopher, sculptor, poet and gardener, Finlay drew on and reinvigorated the classical tradition. This exhibition, curated by Pia Maria Simig, features work Finlay created in response to the French Revolution, and marks the first time an exhibition in the UK has focussed solely on this body of work.

The French Revolution proved a rich subject for Finlay; he first received international attention for his guillotine installation A View to the Temple at Documenta 8 in Kassel in 1987 and thereafter the guillotine became one of the most enduring elements of his iconography.

For the artist the Revolution represented a moment of enormous political and aesthetic rupture and signalled a great moral, as well as political, leap. The period bookended by the dates in the title of this exhibition correspond with the establishment of the National Assembly and the storming of the Bastille in 1789, and the Thermidorian Reaction in 1794, which saw the arrest and execution of several of the key members of the Jacobin forces, including Maximilien Robespierre (1758-1794) and Louis Antoine de Saint-Just (1767-1794). This period thus encompasses extraordinary advances in secular democracy and social progress and also great bloodshed and unrest: the Enlightenment and the guillotine.

The exhibition includes a range of Finlay’s Revolutionary works, including the imposing eleven metre carved relief The Sound of Running Water, 1990, which was shown in the Bienal de São Paulo in 2012. This work features an evocative line that could serve as the introduction to themes of poetry and politics, and of beauty and immanence in the artist’s work: ‘THE SOUND OF RUNNING WATER HEARD THROUGH THE CHINKS IN A STONE DYKE: REVOLUTION’.

Aphrodite of the Terror, 1987 is a plaster sculpture based on the Hellenic statue of the Greek goddess of love and beauty known as the Medici Venus. In Finlay’s version she is adorned around the neck with a red string. The string is a reference to the thin red silk chokers worn by women whose loved ones had been executed during the Terror.

The wall painting Apollo and Daphne, After Bernini, 1991, depicts the Greek myth in which the wood nymph Daphne is transformed into a tree whilst fleeing from the god Apollo. The work is based on the sculpture by Gian Lorenzo Bernini (1598–1680), and stands as a comment on the French Revolution, in which, arguably, the revolutionary pursued ideals to the point of destruction. Finlay’s appropriation and re-interpretation of this mythological allegory highlights the contemporary resonance of classical subjects and forms.
The exhibition will be accompanied by two catalogues. The first features commentaries by Stephen Bann on each of the works in the exhibition. The other volume is dedicated to a garden Finlay created in London’s Chelsea, and includes photographs by Robin Gillanders and an essay by Thomas A Clark.

Biographical details:
Finlay was born in 1925 and died in 2006. He was at the forefront of the concrete poetry movement in Britain in the 1960s, and in 1966 he created his famous garden ‘Little Sparta’ in Scotland. His work is shown in museums and galleries all over the world. His permanent works are installed in several gardens and parks in Europe and America.