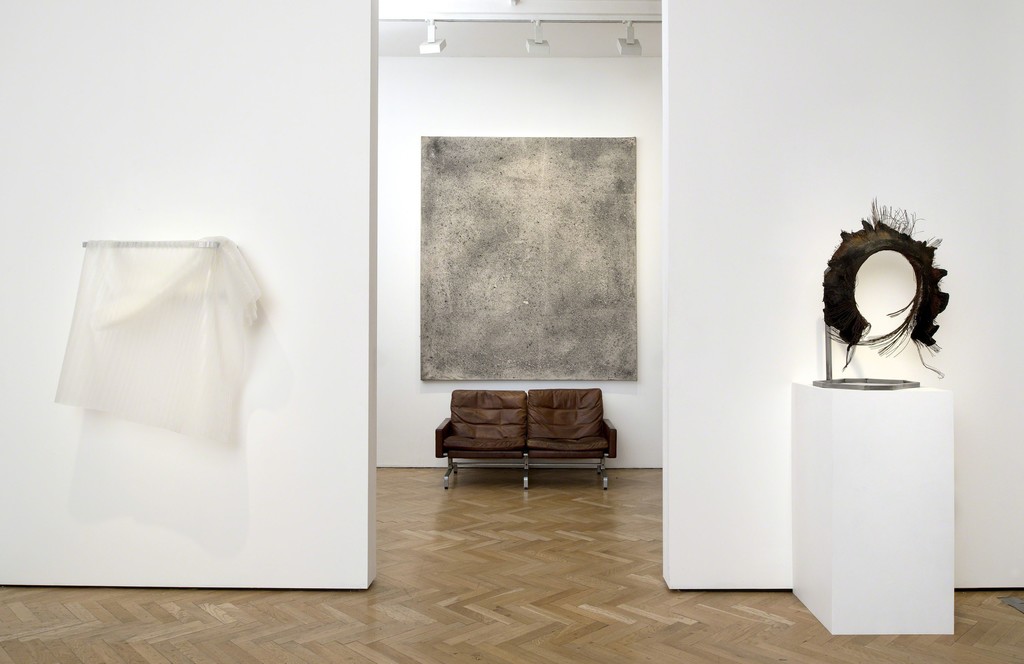 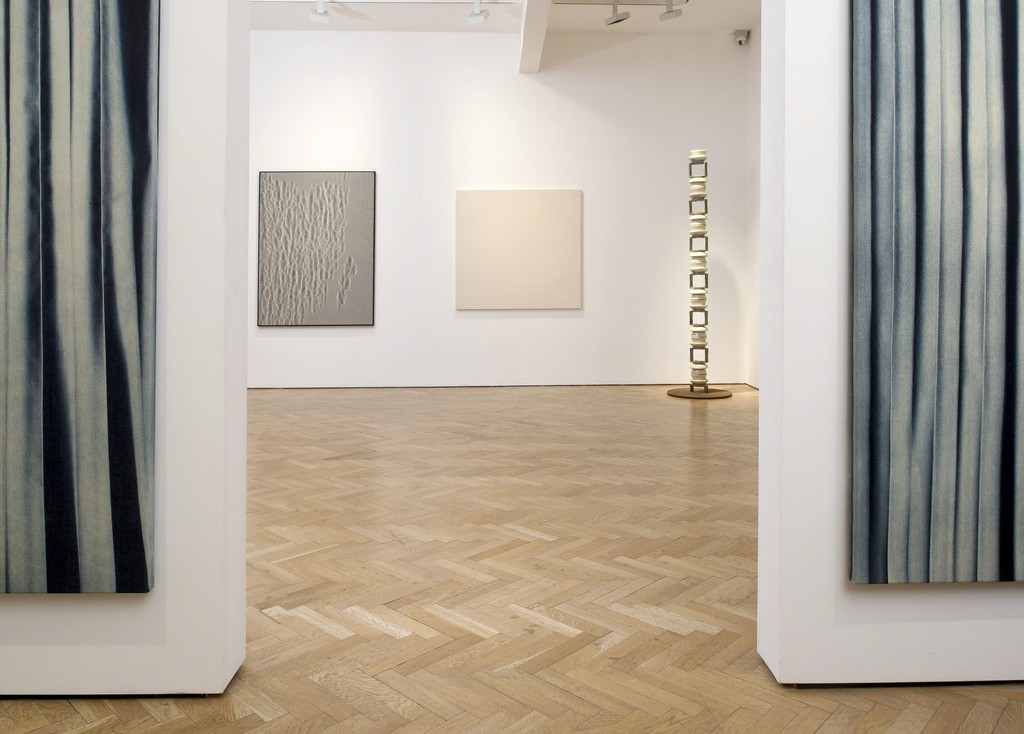 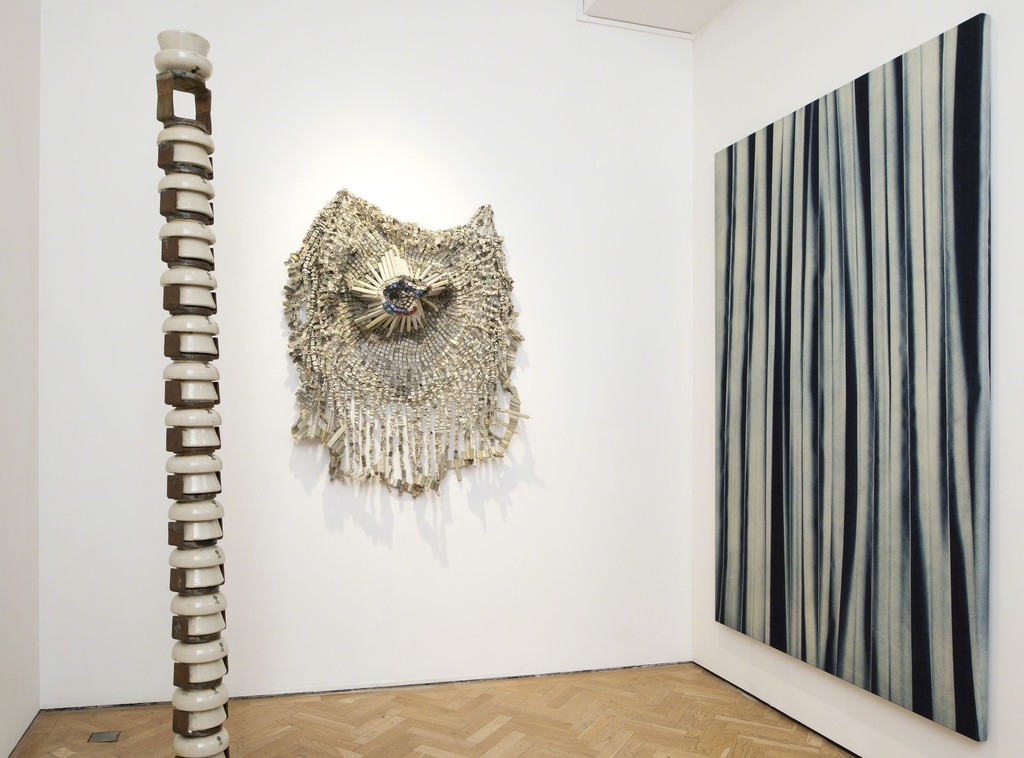 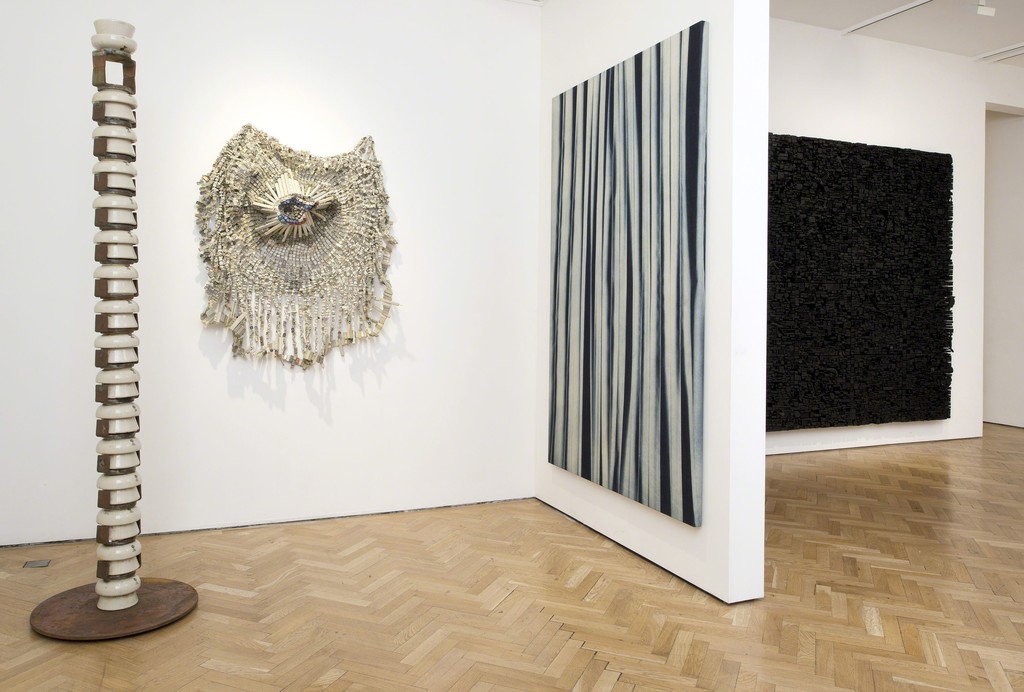 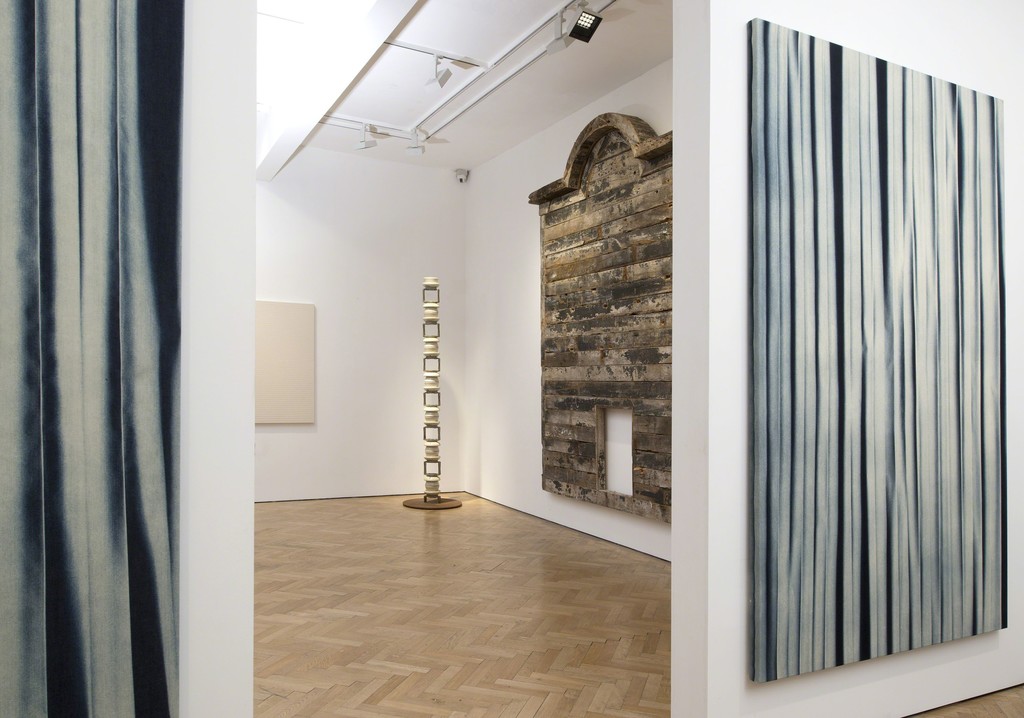 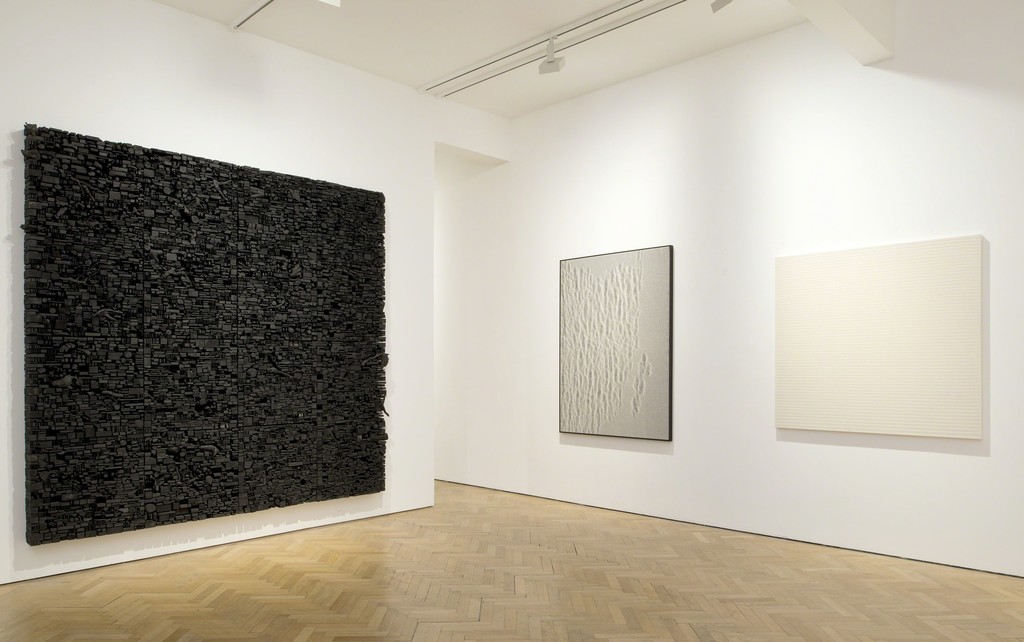 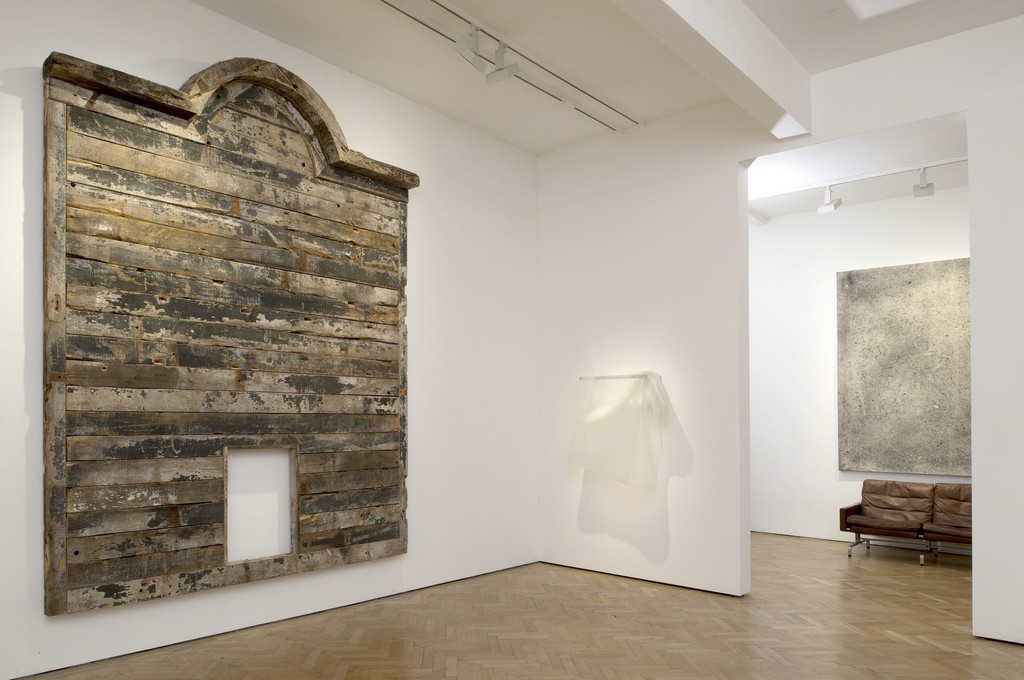 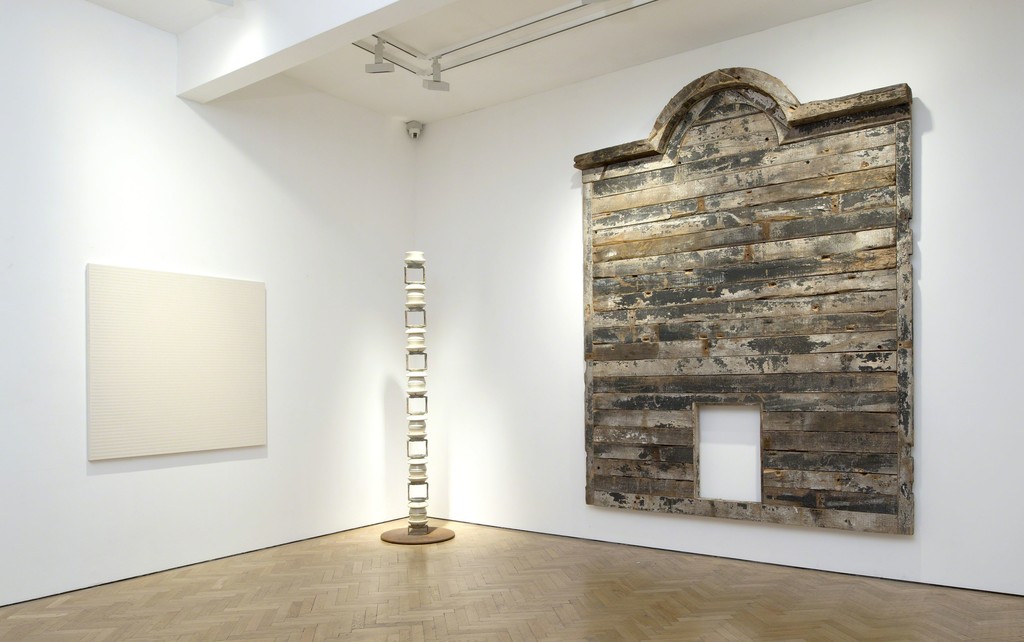 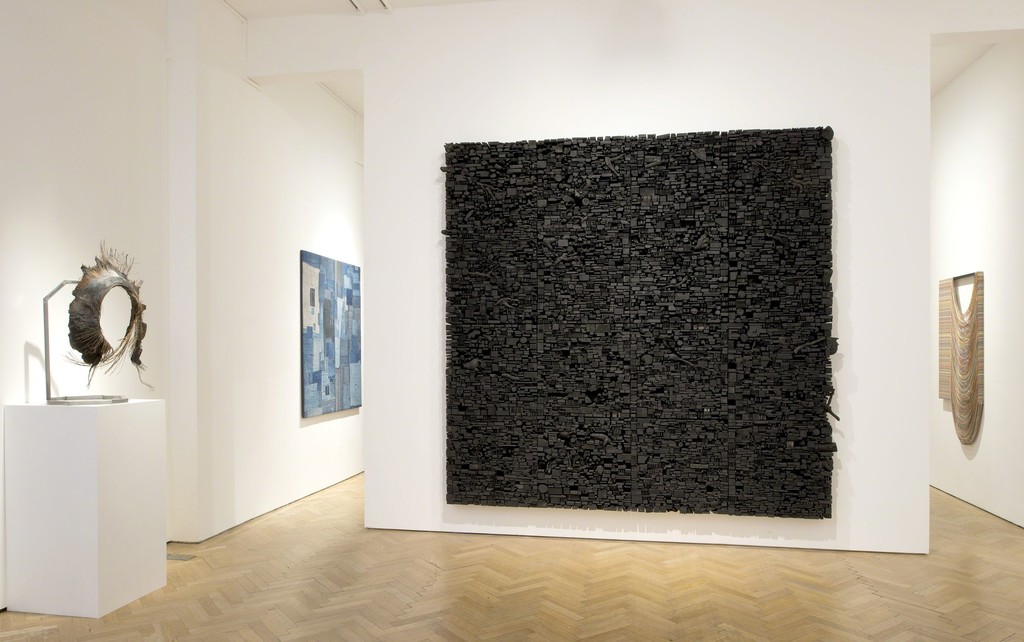 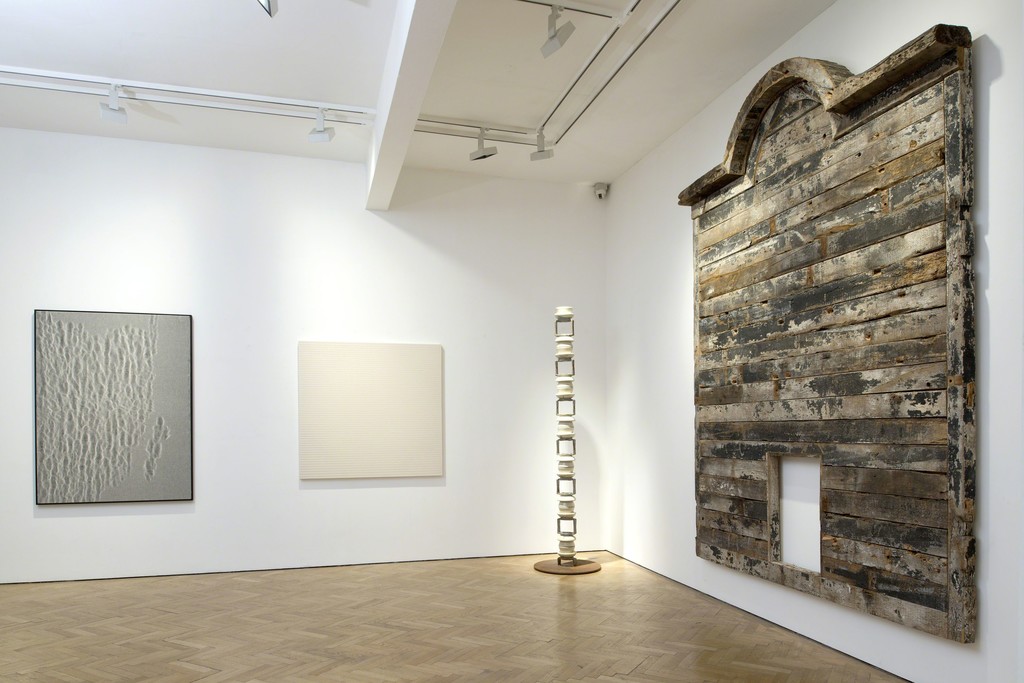 Vigo Gallery presents Brand New Second Hand an exhibition that brings together 14 international artists in whose practice destruction and creation are intertwined, who create new forms from old, who refashion the discarded and the overlooked into art and who challenge notions of originality and the idea of creation ex nihilo.

BORO
Boro, meaning ‘rags’ in Japanese, is the collective name for items – usually clothing and bed covers – made generally by the rural poor of Japan – kept useable by repairing, piecing and patching together discarded fabric onto the items. A single example of Boro item can have been in existence for generations.

KADAR BROCK (Born 1980, US)
Kadar Brock is a leading light of the ground-breaking generation of abstract painters working in New York today. He is also a perfectionist. His most recent phase in his production grew from the creative destruction of his last. Dissatisfied with the body of geometric abstract work he had been making, Brock decided to transform them through a process of erasure using sand paper, and scraping tools followed by chance based interventions. Taking the technique to an extreme, Brock sands the painted surface down on the rough studio floor till the canvas is worn through in myriad places, revealing the chromatic beauty of the painted layers in the process.

LEONARDO DREW (1961, US)
Leonardo Drew is known for his dynamic, often monumental sculptural installations. Made from a wide range of both found and fabricated objects and materials his work exudes a powerful, melancholy and epic aesthetic of beauty in decay.

HEYWOOD & CONDIE (Tony born 1958, UK / Allison born 1960, Scotland)
Heywood & Condie create video works and installations that manifest new ways of engaging with landscape, nature, belief systems and science. For Brand New Second Hand they present Cosmic Soup, a retro, colour LED screen that plays a primitive animation that mashes up multiple origin myths into a work that recalls the earliest bitmap shooter games like Space Invaders. The animation plays through the screen of a stained glass image of the Virgin Mary, acquired by the artists after it had been vandalized, the Virgin’s face destroyed by a hurled rock.

HENRY KROKATSIS (1965, UK)
Henry Krokatsis uses a broad and extraordinary range of materials and techniques to make his work; smoke, found wood, rubber and antique mirrors. His use of often found or low-status objects and materials is, he says, an act of faith in the bankrupt. "I want to make objects that oscillate between the destitute and the divine.” In Brand New Second Hand he presents one of his well-known mirror works made from decorative mirrors found in old antique shops, laser cut to fit together like a coat of arms. The different reflective qualities of the varying techniques used over time to make the original mirrors provides a new twist on the age old concern of capturing light in art.

PENNY LAMB (1968, UK)
Penny Lamb’s art making is, for her, explicitly a compulsive act of alchemy, transforming the trauma that she has experienced and the trauma of the world, into works of meaning and, sometimes, beauty. In Brand New Second Hand Lamb presents a powerful, urban totem, formed from found ceramic and metal forms, a manifestation of the ability of art to make meaning from the most inert of objects.

NIKA NEELOVA (1987, Russia)
Russian artist, Nika Neelova’s sculptural work and installations evoke a sense of immanent ruin or collapse and through the use of gesture towards archetypal forms, such as the flag, clearly engage with the idea and pathos of human history and its repeated cycles of promise and failure. In Brand New Second Hand, Neelova presents two sculptures that transpose her concerns into the visual world of the packing and transport of the art object. Each work is a wall based, minimal sculptural object, draped with what seem to be an accidentally left sheets of packing material, that, on closer inspection reveal themselves to be sheets of silicone rubber carefully molded by Neelova from the packing material, bearing for example, even the delicate impression of sticky tape and trapping minute specs of dust from the original works.

MARIANNE VITALE (1973, US)
Marianne Vitale creates large, sculptural installations using found, man made objects that symbolically engage with American history via the semantics of conceptual installation art. In recent years she has produced a series of celebrated sculptures that manifest her preoccupation with exploring the archetypal forms of the history and mythology of American frontier culture. This work recalls or simply uses; sections of railroad, burned bridges, tombstones and outhouses.

GABRIEL PIONKOWSKI (1986, US)
Gabriel Pionkowski takes process-based abstraction to an extreme. Unraveling the canvas into discrete strands by hand, he paints each deconstructed string individually and then weaves the strands back together. As much a solo performative exercise as an act of object creation, Pionkowski’s work examines the intimate relationship between destruction and creation.

EVAN ROBARTS (1982, US)
US based artist Evan Roberts investigates the relationship between personal memory and objects. His highly playful sculptures and wall-based works incorporate old, everyday objects owned by the artist, from brooms, television sets, chairs, baseball bats and a huge variety of other objects into works that employ the language of expanded, sculptural collage – that seem to physically manifest the strange, uncertain and mashed-up nature of memory and lived experience.

ANJA SCHWÖRER (1971, Germany)
Berlin based painter Anja Schwörer creates her often beautiful works from well researched and planned destructive and invasive processes, that she applies to her canvases; dying, cutting, folding and immersing image in substances like bleach, that tease out patterns and the aesthetic residue of cause and effect.

MOFFAT TAKADIWA (1983, Zimbabwe)
Takadiwa is one of the best known so called “born free” (post-independence) generation of artists from Zimbabwe. Takadiwa takes every day, discarded objects and detritus, from the remnants of mass-produced electronic goods, toys or sporting goods and combines them into compelling sculptural forms that nod to the form of traditional totemic objects.

ISABEL YELLIN (1987, US)
Yellin makes fizzy, contemporary, painterly, abstract works. Mostly wall hung, she collages found and bought materials and fabric; denim, polyester, old cotton bed sheets and passages of netting and mesh, onto which she then paints. Hanging loosely, stretcher-less, the works occupy a space between sculpture and painting.

DOUGLAS WHITE (1979, UK)
Douglas White is London based sculptor who creates his work from found materials and processes. The strange and beautiful works he makes seem to have emerged from some non-human world, or from a human culture far away from our technological and industrial society. Instead his art is imbued with aesthetic of ant hills, animals remains and jungle fauna - powerful and forbidding.

DUNCAN MACASKILL (1944, UK)
Duncan Macaskill is an innovative and compulsive maker of art. His postcard series comprises of hundred of postcards, the faces of which he covers with abstract collages made from bits of newspaper, that he sends for free to recipients of his choice, undermining the economic premise of the art market (that you don’t get anything for free). In Brand New Second Hand he presents a beautiful and delicate ash painting. Such is the compulsive volume of his production Mackaskill often runs out of space in his studio. His solution is to periodically burn piles of work and apply the resulting ash to the surface of a canvas to make his ash paintings.

An accompanying essay by Nick Hackworth is available on request.