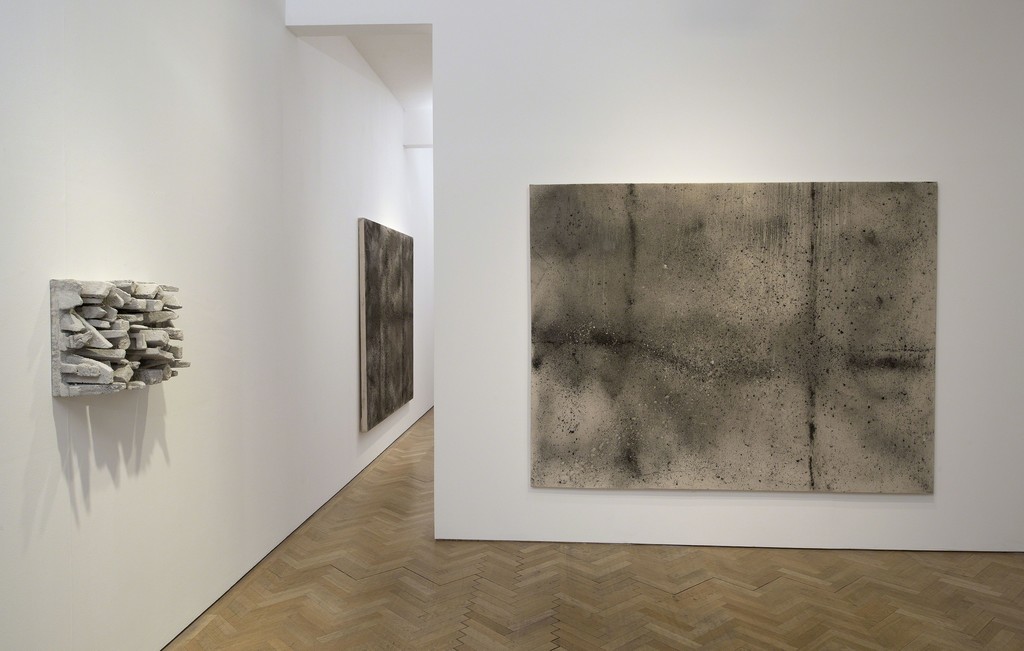 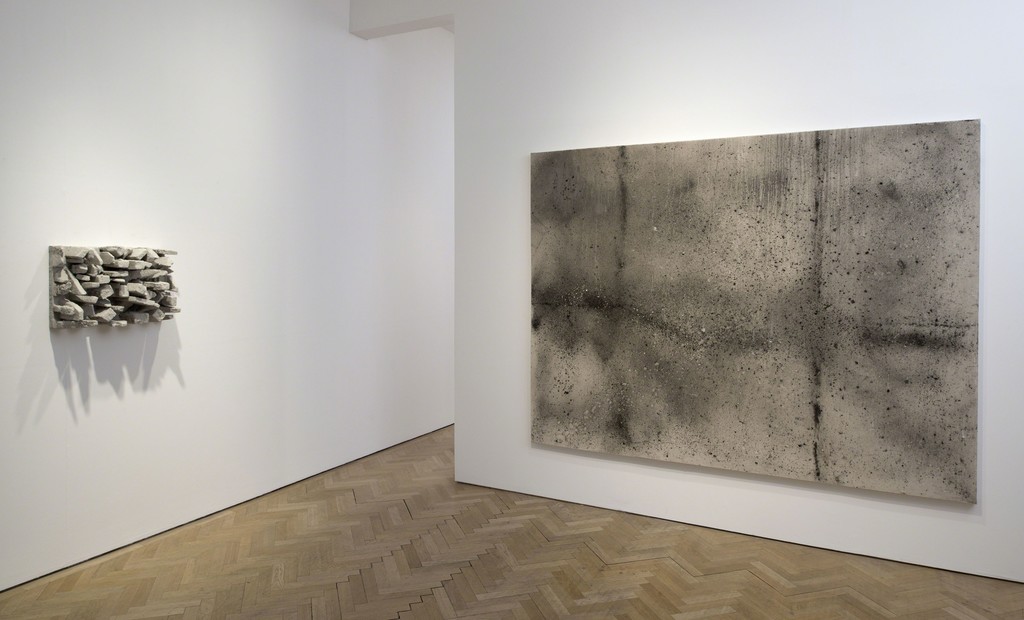 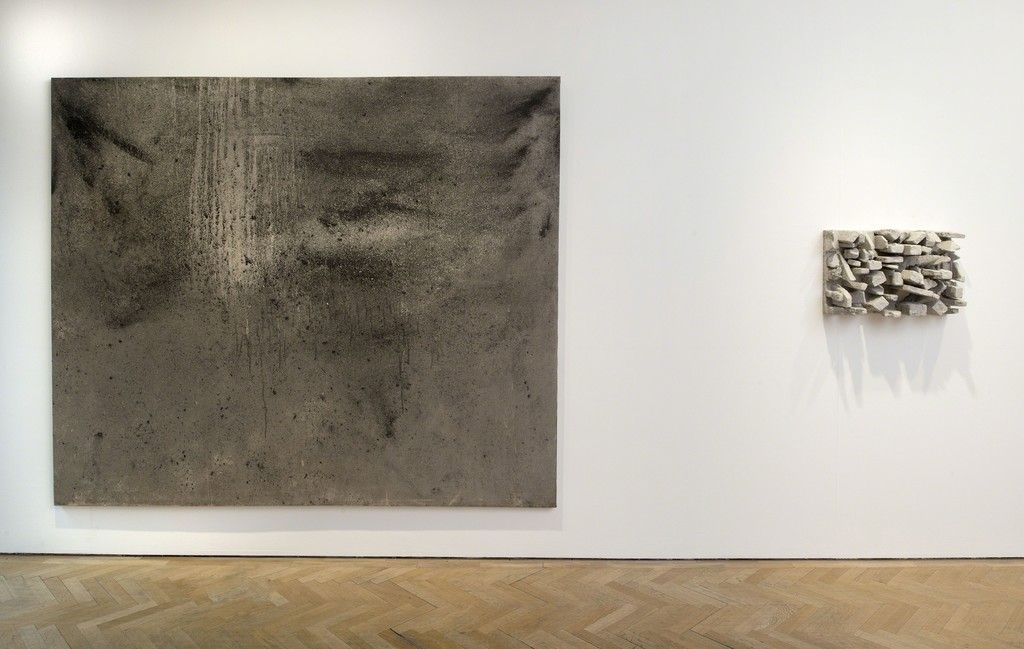 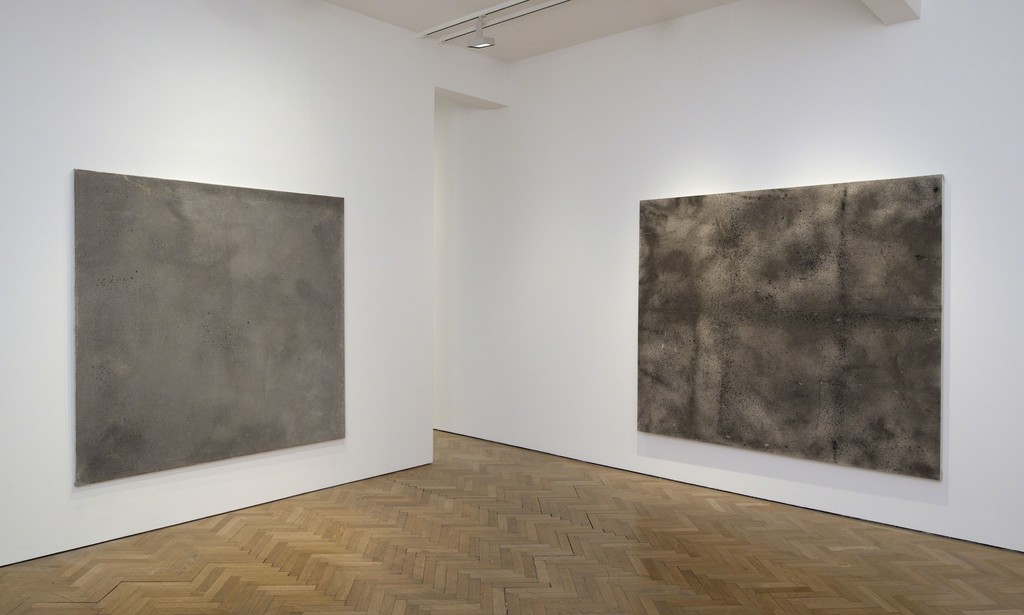 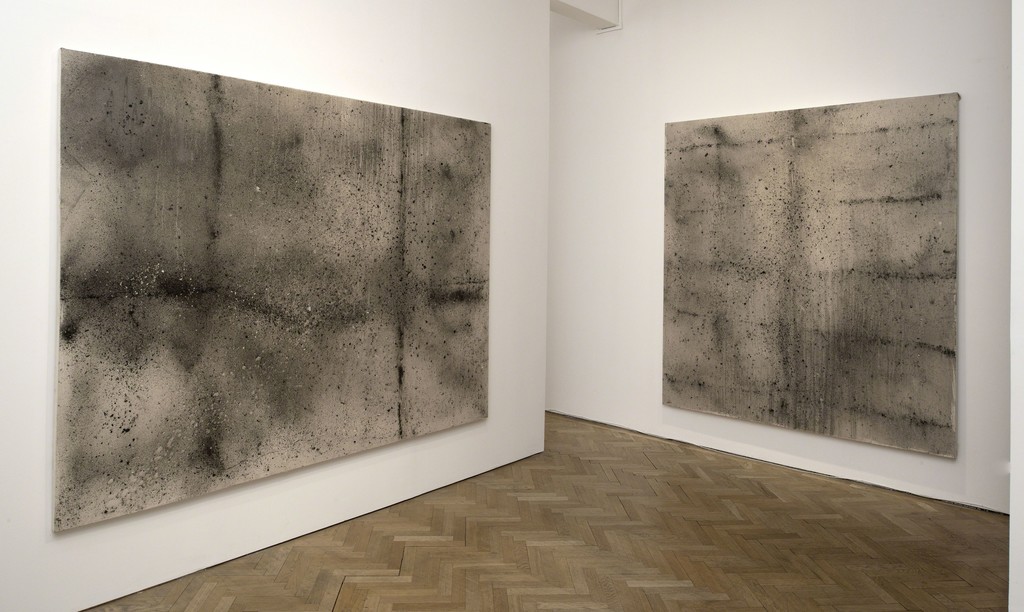 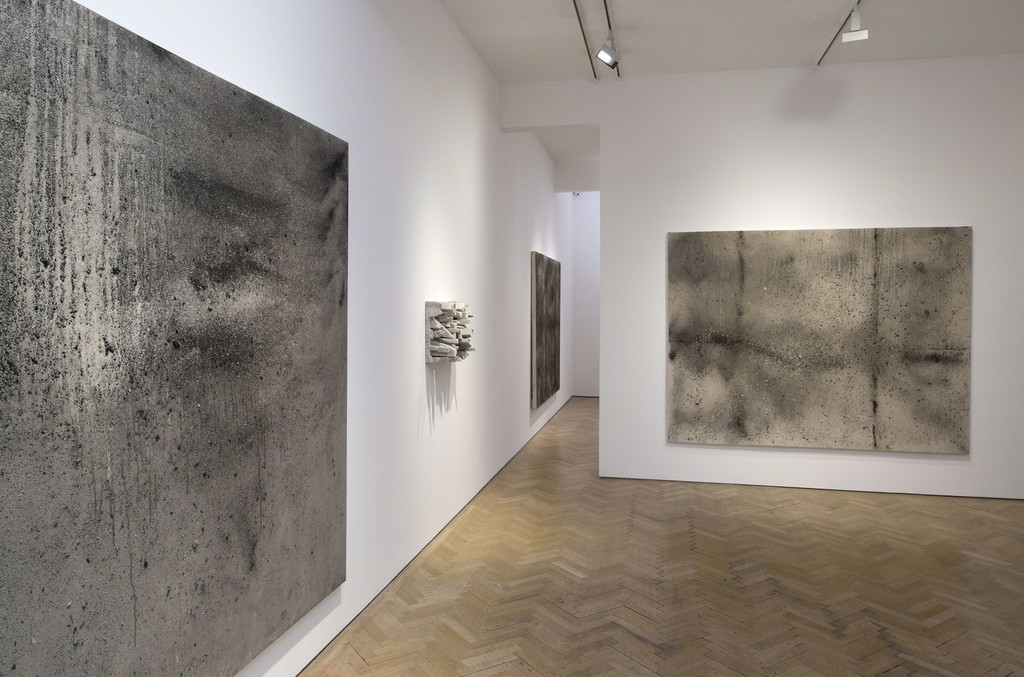 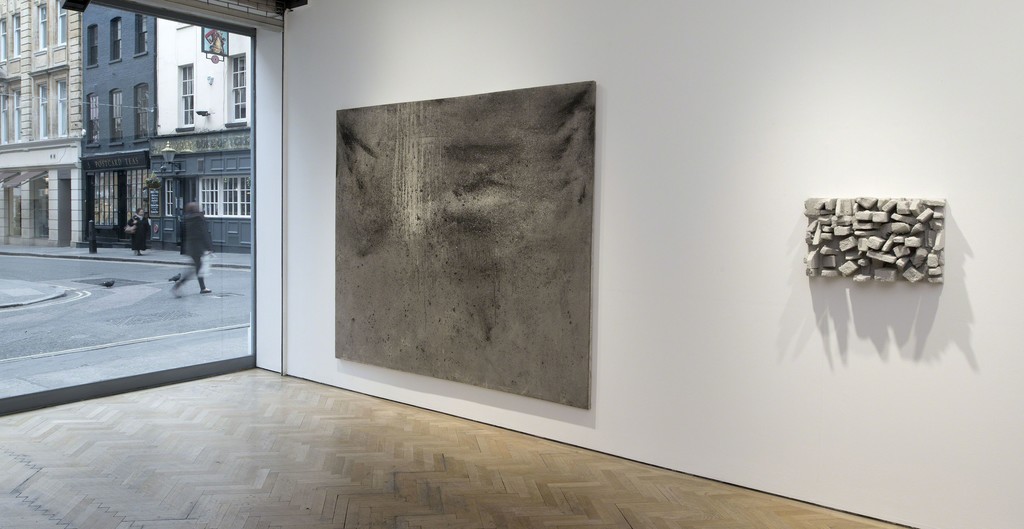 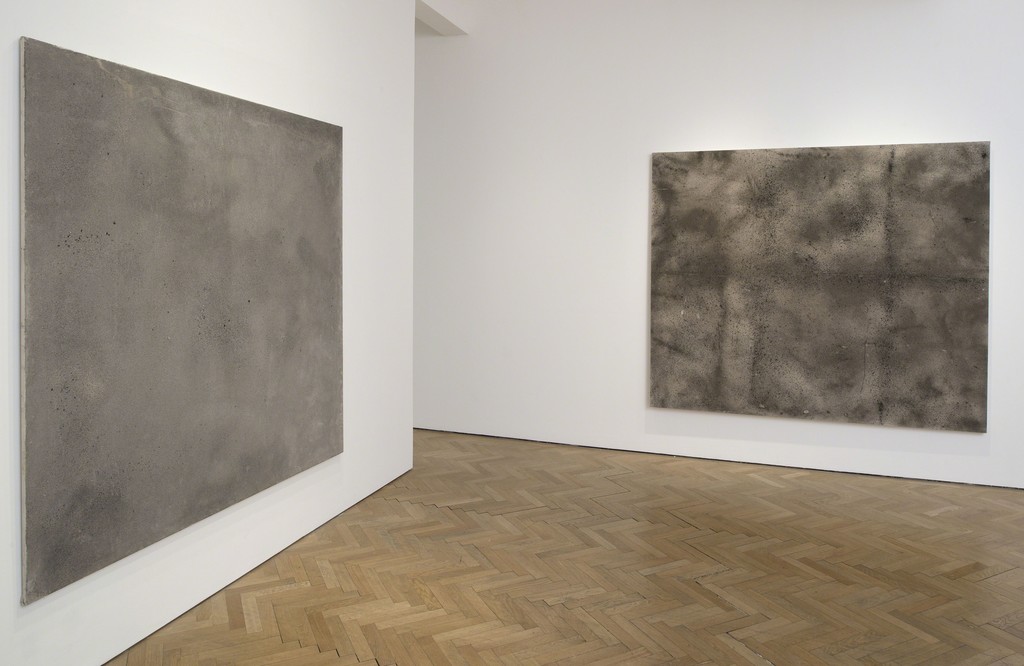 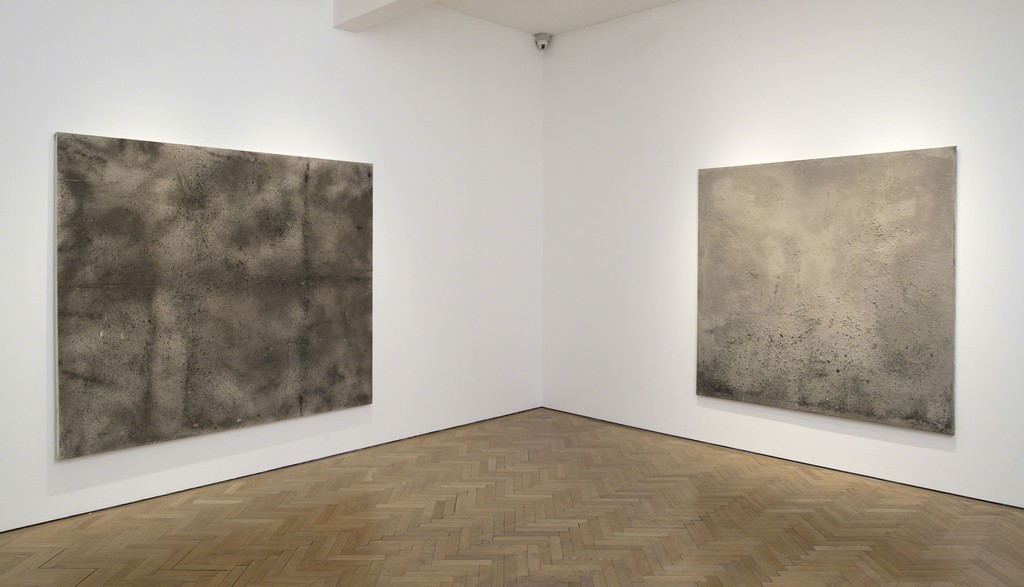 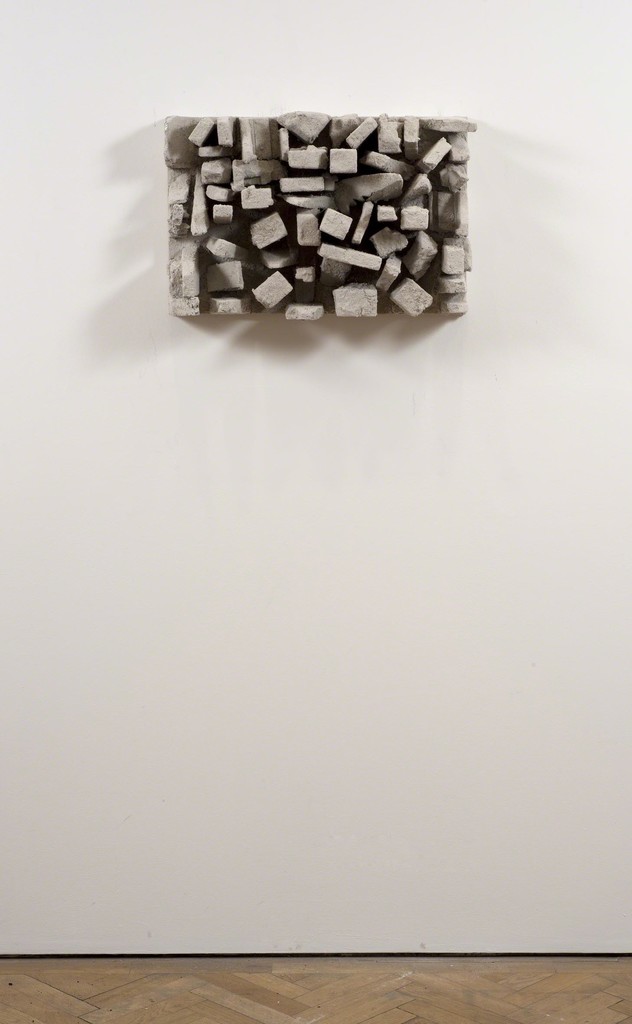 Steer in Tin Sidecar is Duncan MacAskill’s first solo show at Vigo gallery.
The exhibition comprises two bodies of work; large paintings made of ash and glue and a small selection of MacAskill’s ongoing, epic series of postcard works. Superficially different in scale, media and apparent significance, the two strands of work are linked in their mutual, subtle and beautiful relationship to time, memory and the material world.
MacAskill started his ash paintings in the early 90s. They stem from the artist’s idiosyncratic relationship with the world around us. As anyone who has spent time with MacAskill or has visited his studio has witnessed, MacAskill sees creative potential in an apparently limitless field of common objects, anything from sticks, to teabags, to scraps of paper, and for years has collected anything he felt would or could be of use. From time to time, as his studio and storage spaces begin to overflow, and access is no longer possible, MacAskill drags out old works and miscellaneous detritus and ritually burns it. Glued with PVA to the surface of the canvas, this burnt out residue is used to create his ash paintings.
Sometimes MacAskill applies the ash over the entire surface of the canvas, like a mist, and the works look as if they could be primal, colour-field painting from the 1950’s or Japanese 19th Century brush paintings. Other times he varies the thickness of the glue to articulate patterns of density. He also coats the ash over reliefs made-up of roughly shaped polystyrene. Throughout, the ash is talismanic, a material symbolic of transience and the metamorphic essence of nature, encompassing both destruction and creation.

The epic, ongoing postcard series runs parallel to the ash paintings within MacAskill’s rich and complex practice. Classic examples of mail art, begun before the artist was even aware of that definition, MackAskill’s postcards over the years have taken many forms; cards that carry physical collages of detritus, his longitude and latitude cards designed to be posted to the artist from the grid reference stamped on the front, his witness cards, paper and card mailed bearing the visual effects of having been taped to a floor or street for sometime and his newspaper collages where MackAskill creates geometric collages from newspaper images, mailed out ‘fresh’ on the day of publication.

Like the ash paintings, but in a different way, the creation and mailing of the postcards mark time. Both series embody ritual in their conception, making and echoing traces of the unseen. The ash, like sedimentary rock, is time compressed and changed. Everything that was the burnt material and all the time and human energy spent on it, now just light ash. Similarly each newspaper collage card is a mute relic of that day, all that news and information rendered into abstract patterns of colour and form, counterpointed by the date and title of the paper pasted on the reverse.

So little of the past survives in the present -memory and art are two of the imperfect vessels we have to carry what remains. MacAsksill’s works understand and embody this and they are beautiful for it.

Duncan MacAskill was born in Clydebank and studied drawing and painting at Glasgow School of Art. For more information please contact [email protected]