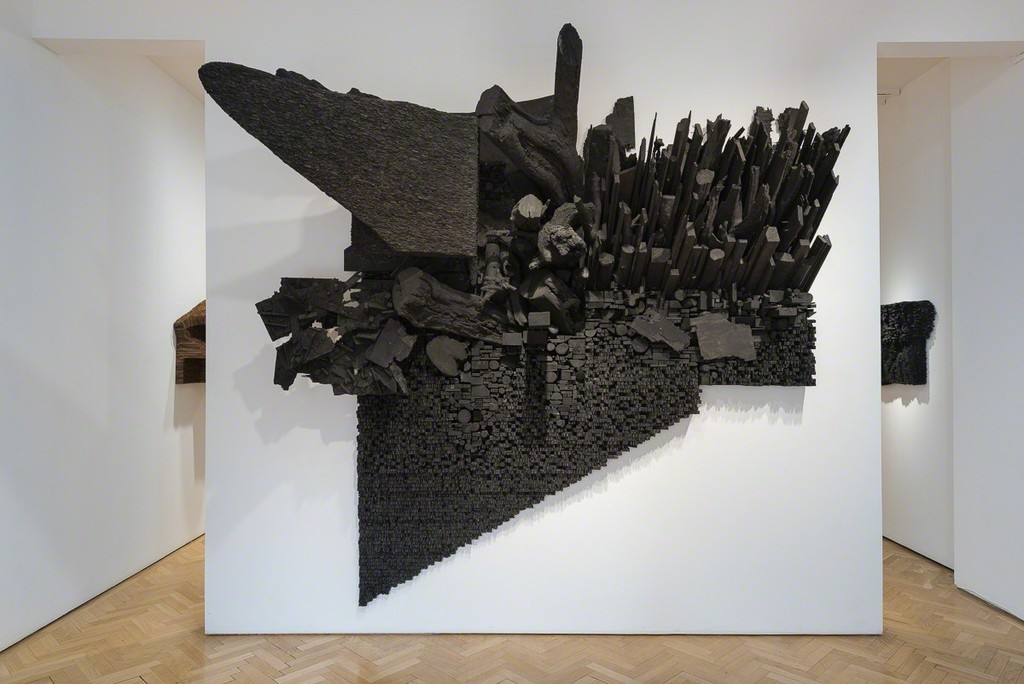 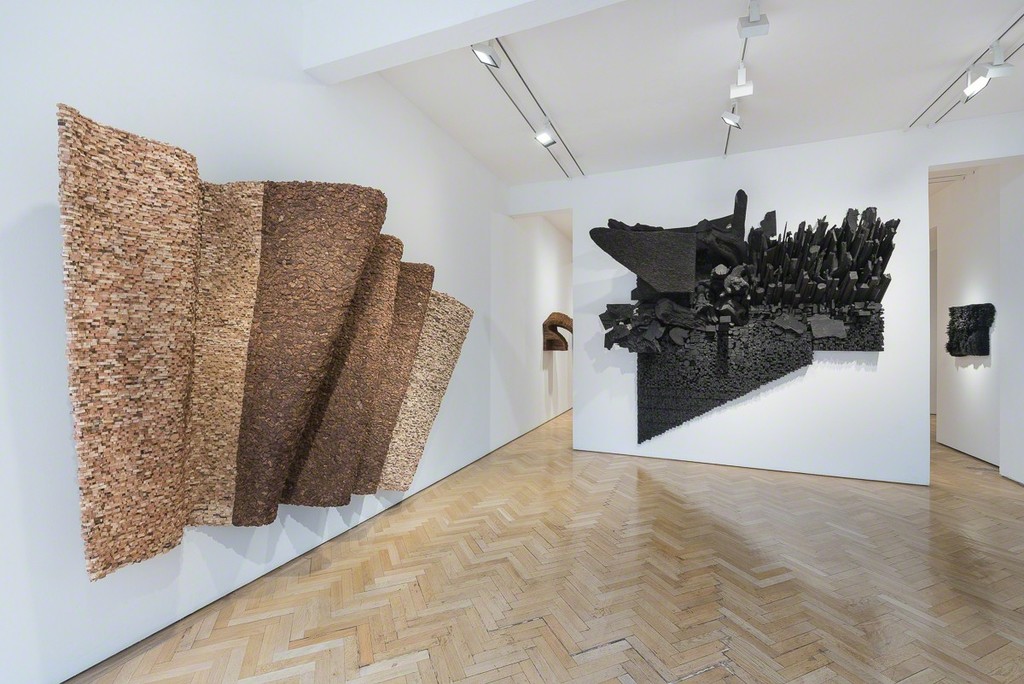 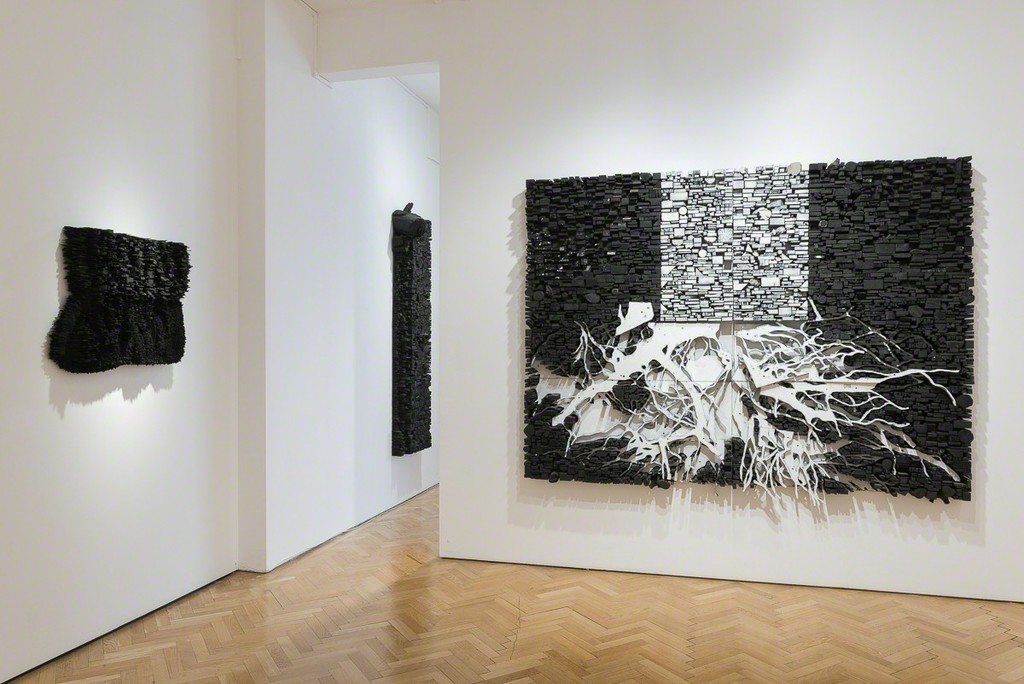 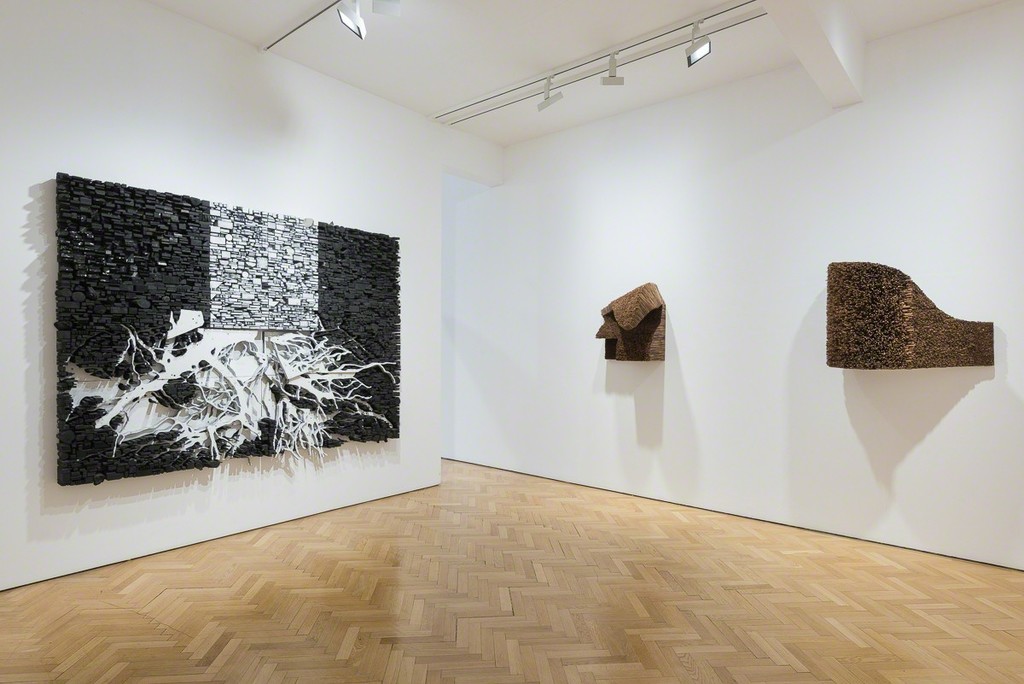 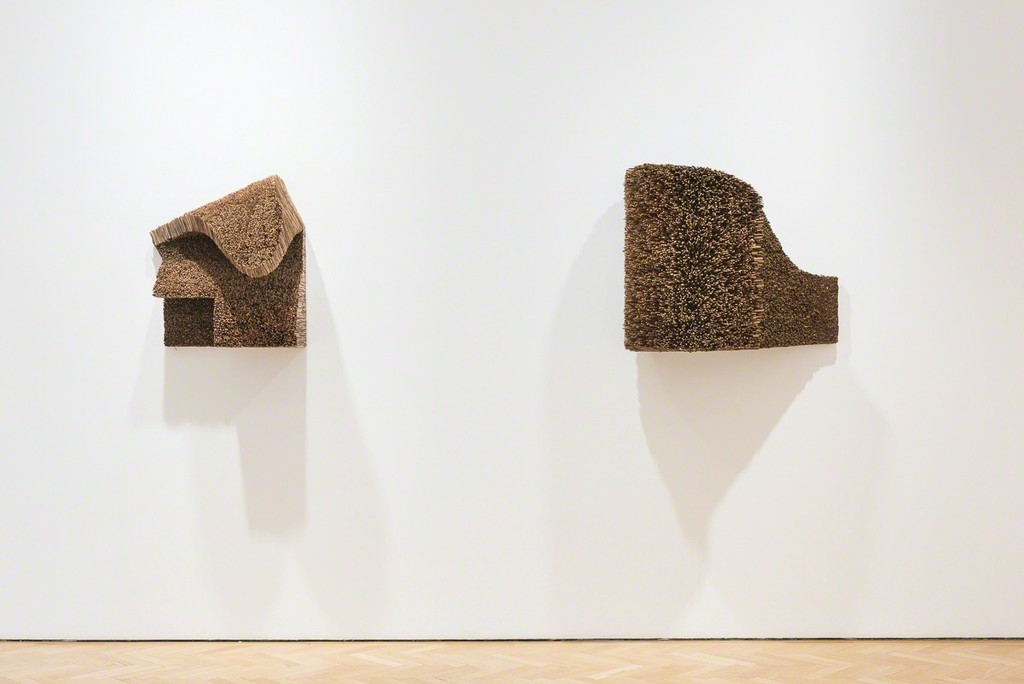 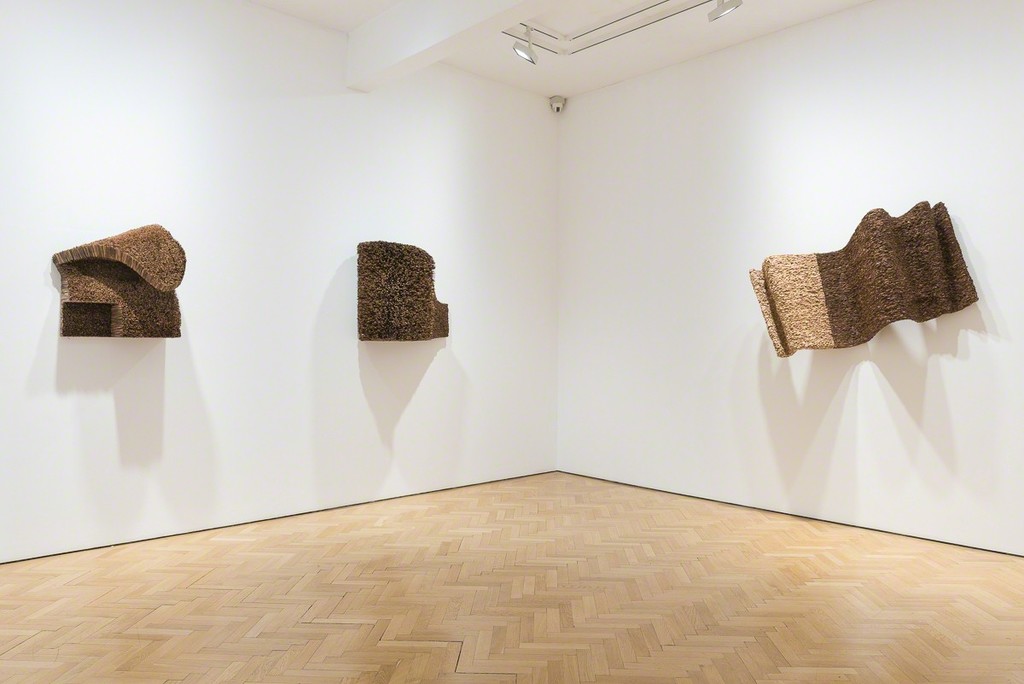 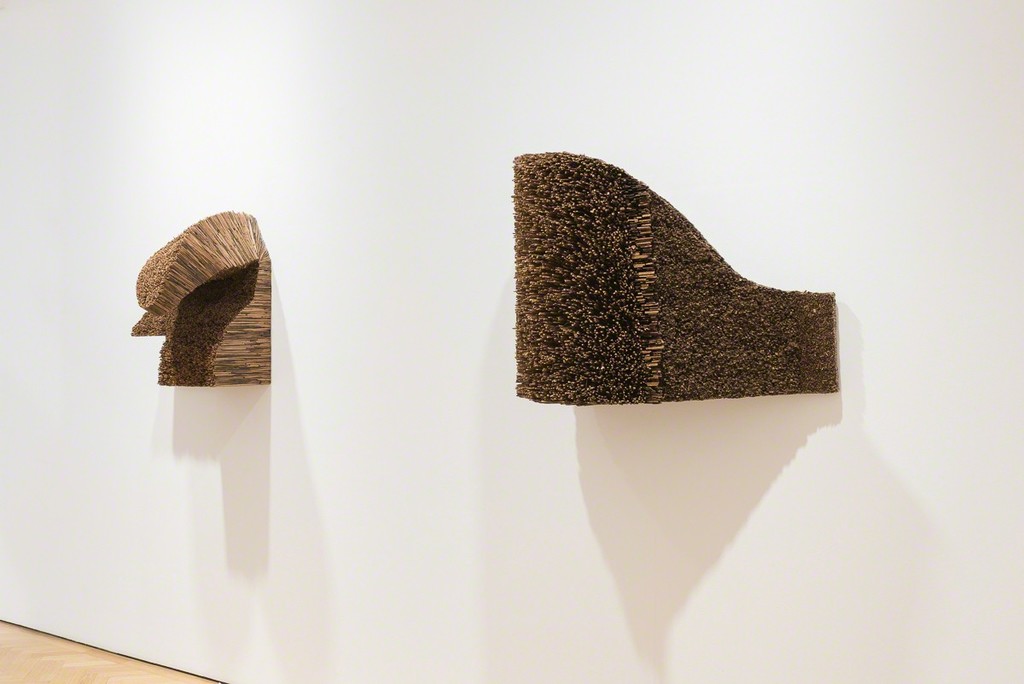 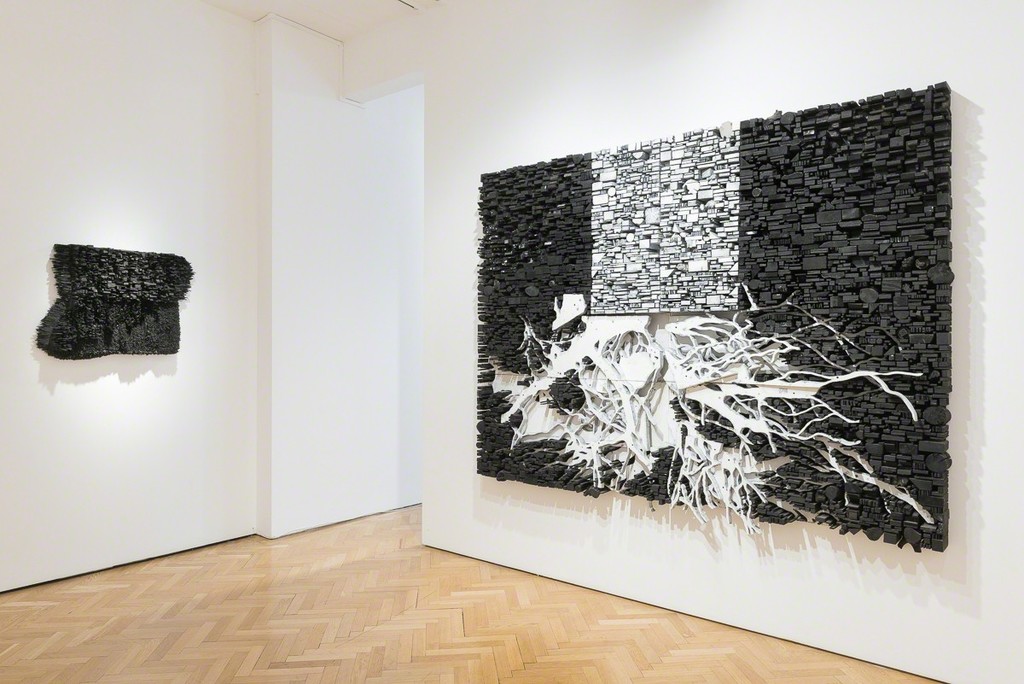 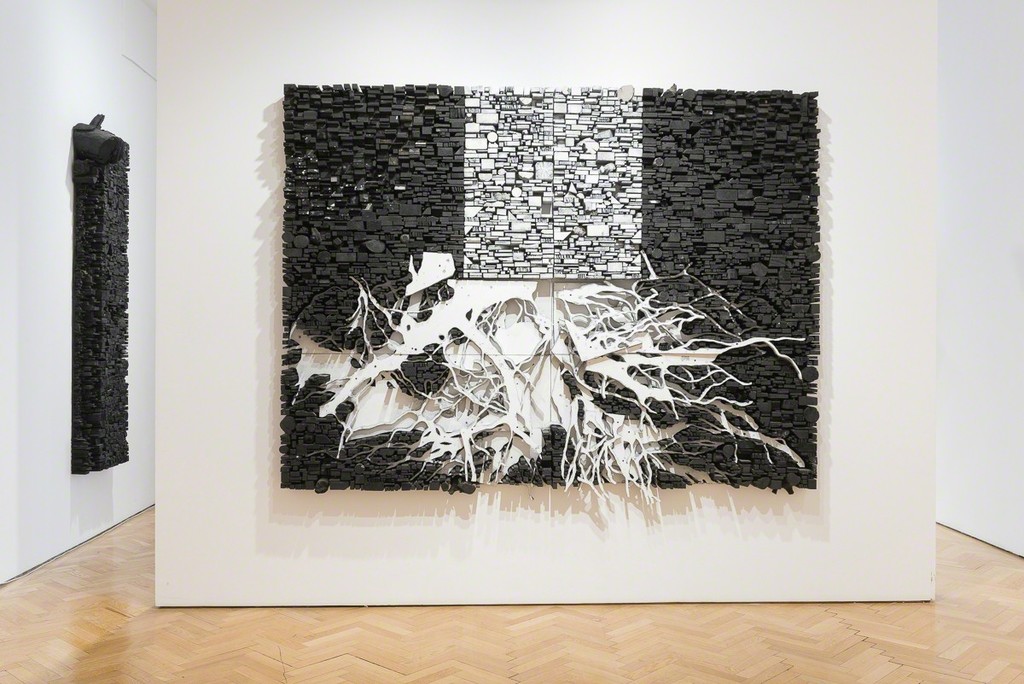 Drew is known for wall based abstract sculptural installations most often based on the exploration and testing of the grid structure. These works incorporate created, manipulated and found materials constructed from fabricated wood, sheet metal, tree branches, roots, paper, raw cotton, rust, found objects and mud. These materials, his paint box in effect, are used to create work, which explores the environment, existence, history and memory.

In his new works, Drew explores the themes he has developed over the last few years, breaking free from and manipulating the order of the grid whilst never quite fully escaping its core sanctity. Number 135L, (below) for example is comprised of a system of expansive small wooden elements, each fastidiously laid like a growing mosaic, emanating from the form like the bark of a rare ambiguous tree. The result is an object fossilised and hardened by the artist’s industry, whilst at the same time seemingly folding back on itself as an organic form, soft in its under frame, like folded pasta or a ribbon encrusted in time.

In contrast, Number 138L, the star of the show, returns to an angular dynamic, brutally beautiful, and seemingly having taken strength from the monumental works that burst out of the wall in his landmark 2009 installations. Informed by developments from the last few years including his printmaking and lessening tie to the formal grid, Number 138L is a condensed and concentrated eruption of forms and matter that displays a refined awareness and confidence of form and nature. This new body of work continues to explore the mutability of the natural world and cyclical nature of existence.

Drew will be in London for the show and available for interview between the 7th and 9th of October.

Growing up in the Bridport projects in Connecticut, Leonardo Drew showed a talent for draftsmanship, which was quickly recognised by his teachers running the local art centre. He went on to attend the Parsons School of Design, and to gain his BFA from the Cooper Union in New York City.

Drew has had several public solo exhibitions at notable institutions including the Museum of Contemporary Art, San Diego (1995); The Hirschhorn Museum and Sculpture Garden at the Smithsonian Institution in Washington DC (2000); the Royal Hibernian Academy in Dublin (2001); and Palazzo Delle Papesse, Centro Arte Contemporanea in Siena (2006). His mid-career survey exhibition, Existed: Leonardo Drew, debuted in 2009 at the Blaffer Gallery, (Art Museum of the University of Houston), travelling to the Weatherspoon Art Museum in Greensboro, NC and the DeCordova Museum and Sculpture Park in Lincoln, MA.

He has participated in artist residencies at ArtPace, San Antonio and The Studio Museum of Harlem in New York, among others. In 2011, he won the Joyce Alexander Wein Artist Prize. The annual prize, which includes $50,000, is given to one African American artist whose body of work exhibits great innovation, promise and creativity. Previous recipients include Leslie Hewitt (2010), Glenn Ligon (2009), Nadine Robinson (2008), Trenton Doyle Hancock (2007) and Lorna Simpson (2006).

In the last few years, the TATE and many other important collections have acquired his works. He has shown groundbreaking prints with Pace Gallery and presented major exhibitions with Vigo in London and with Sikkema Jenkins & Co. in New York. Drew was also recently featured in an episode of the contemporary art documentary series, Art 21. This year, Drew’s work was the subject of solo exhibitions in New York, Helsinki, London and Hong Kong.