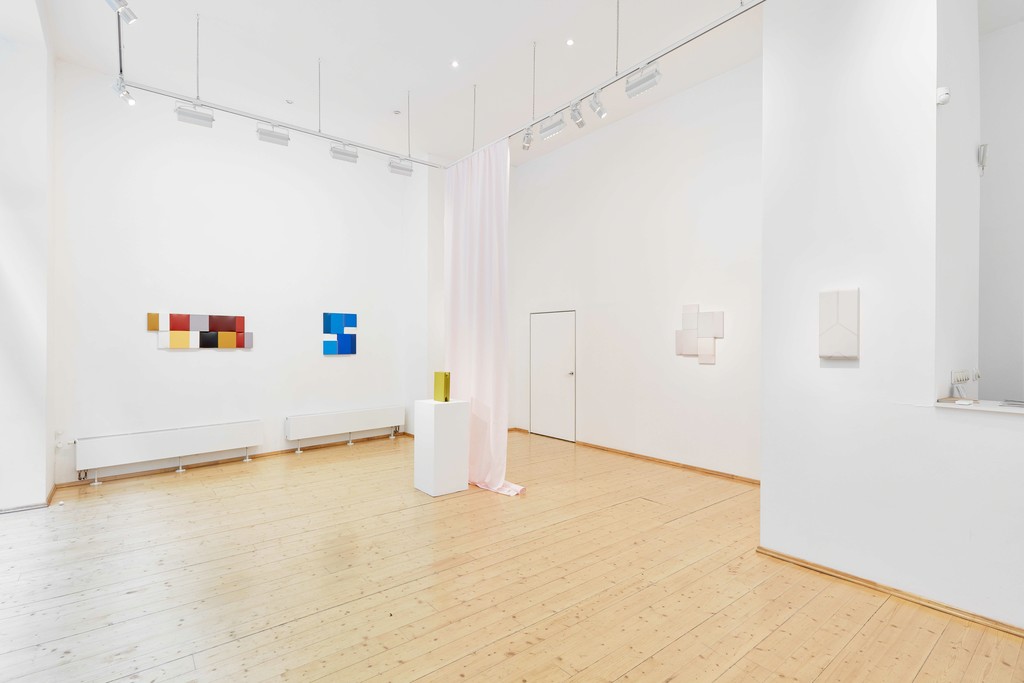 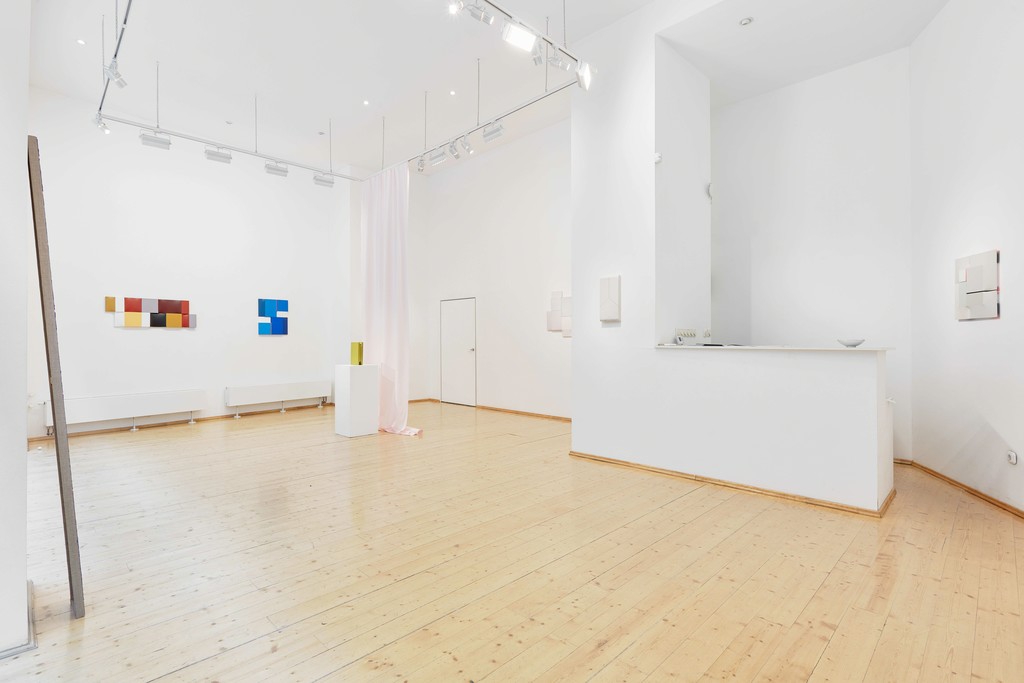 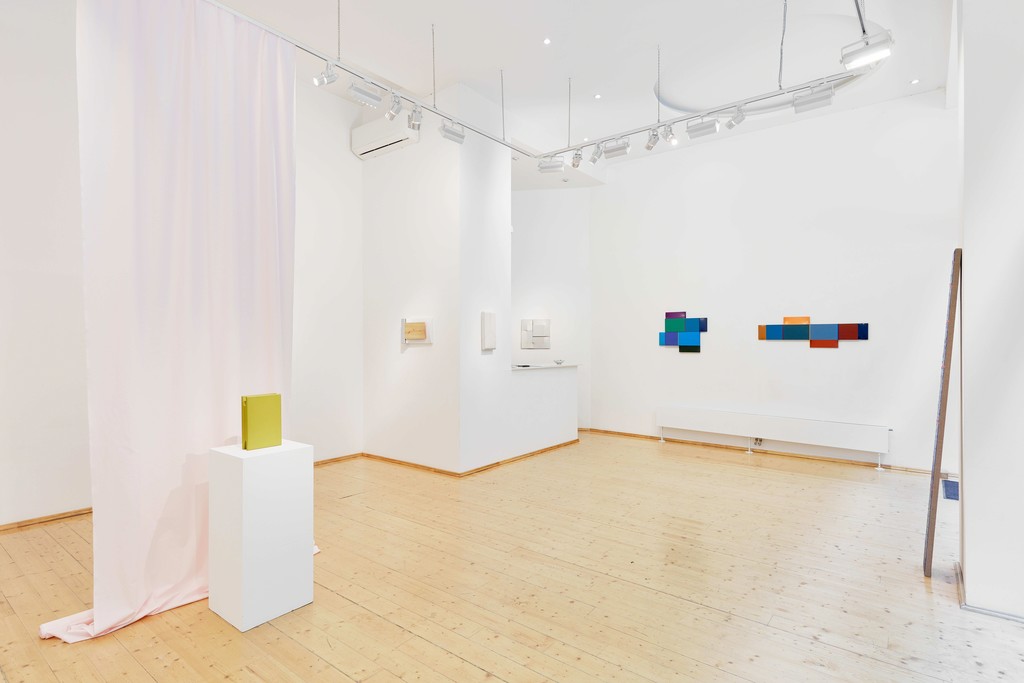 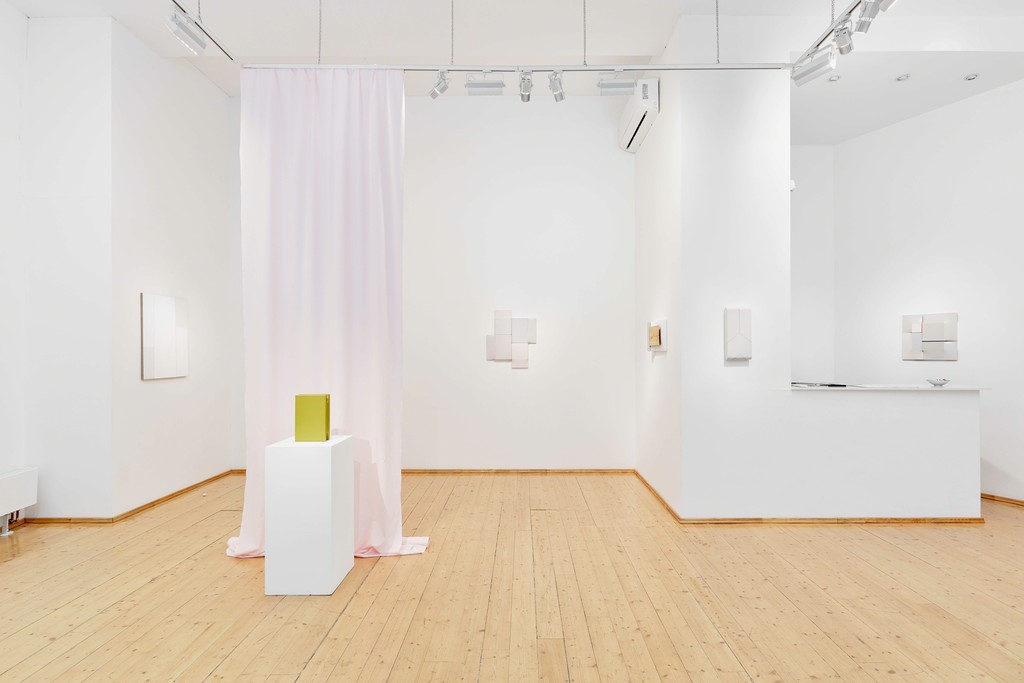 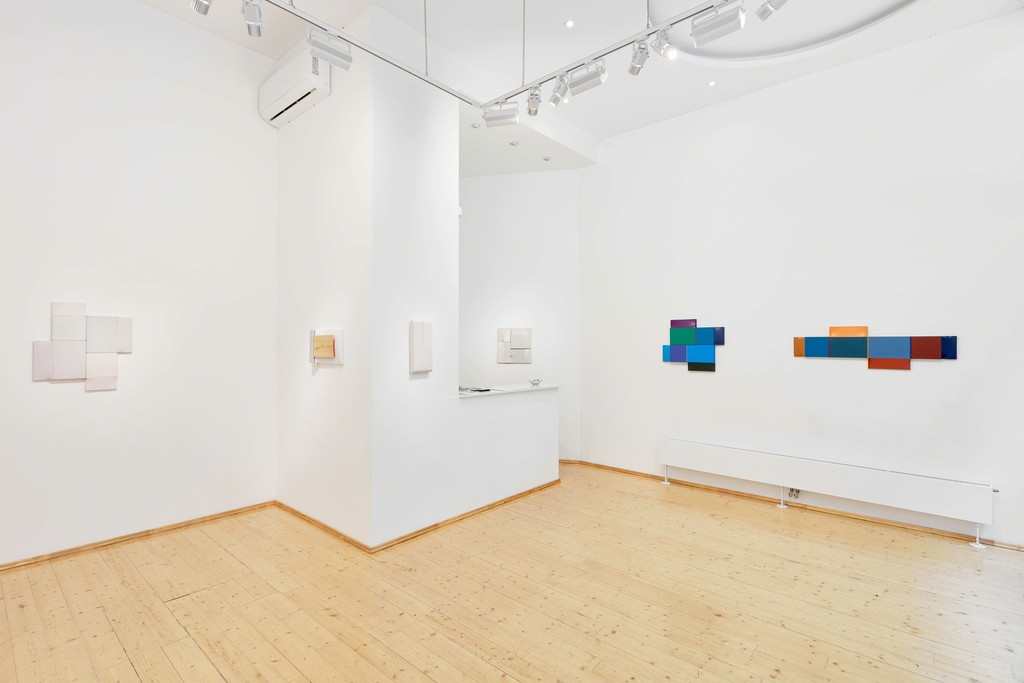 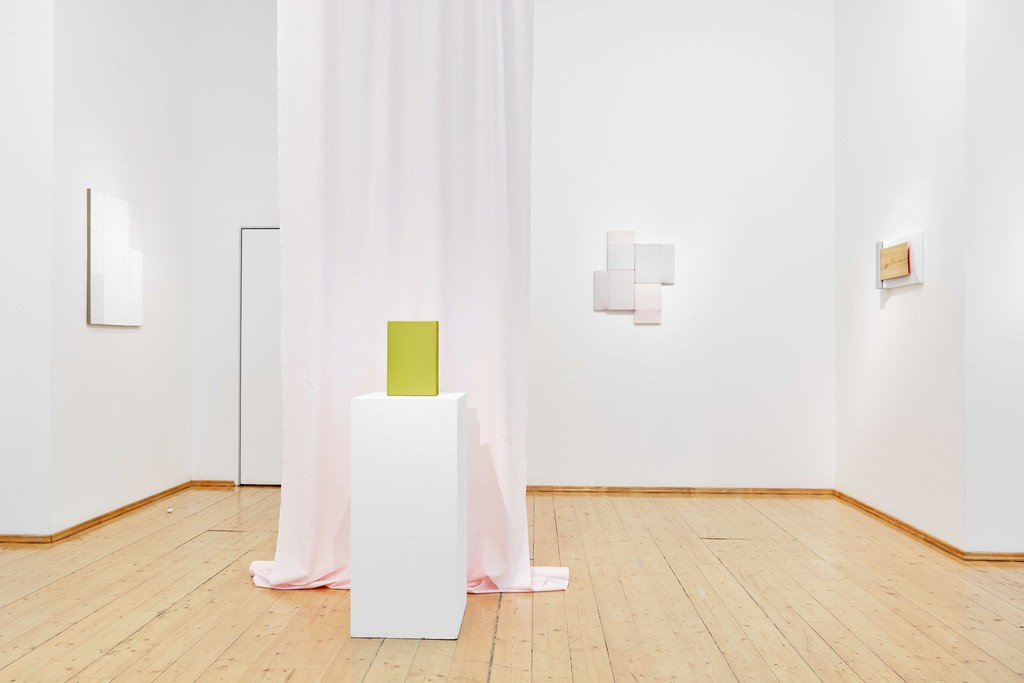 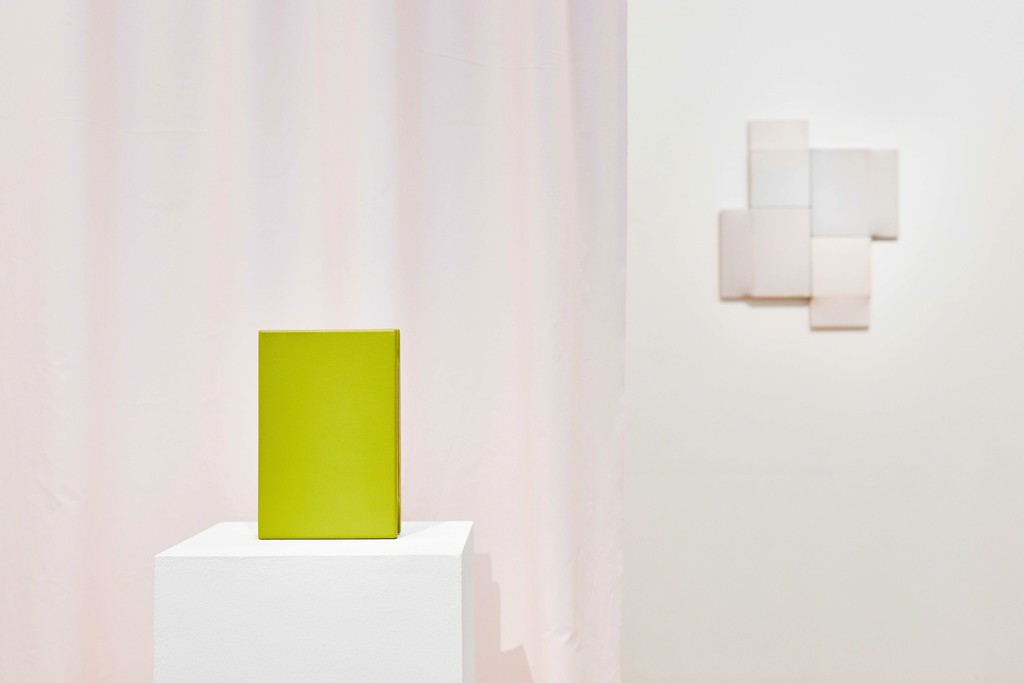 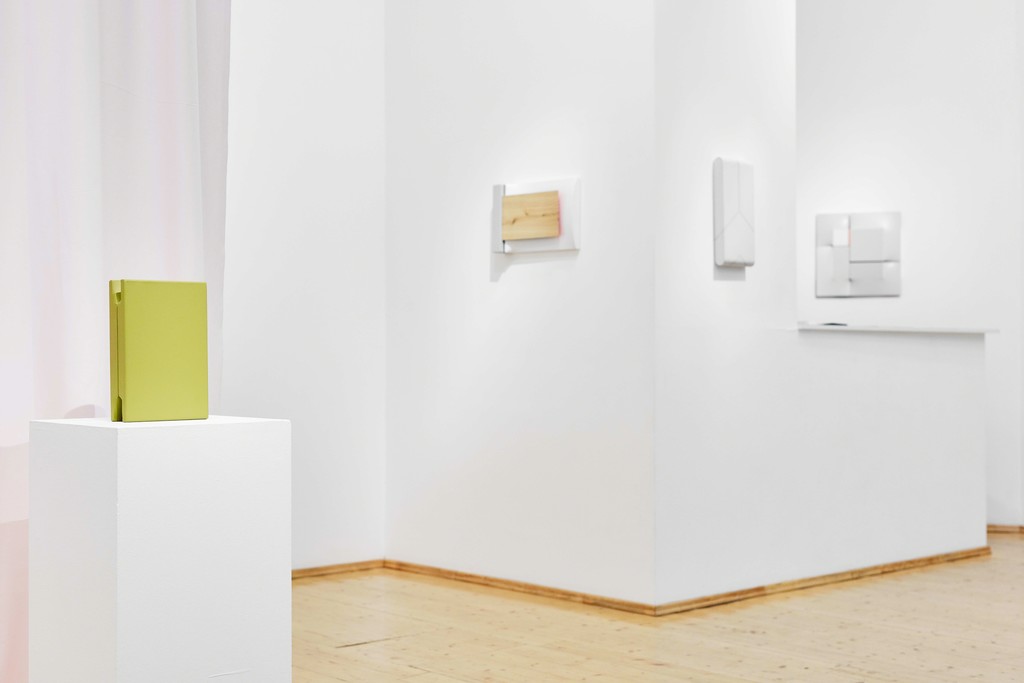 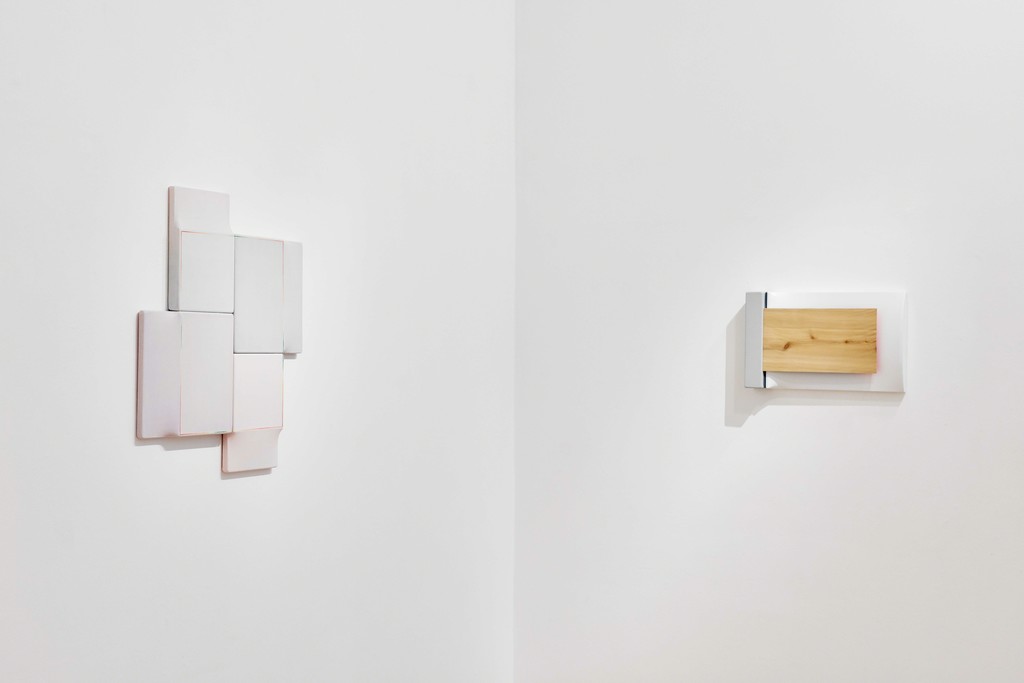 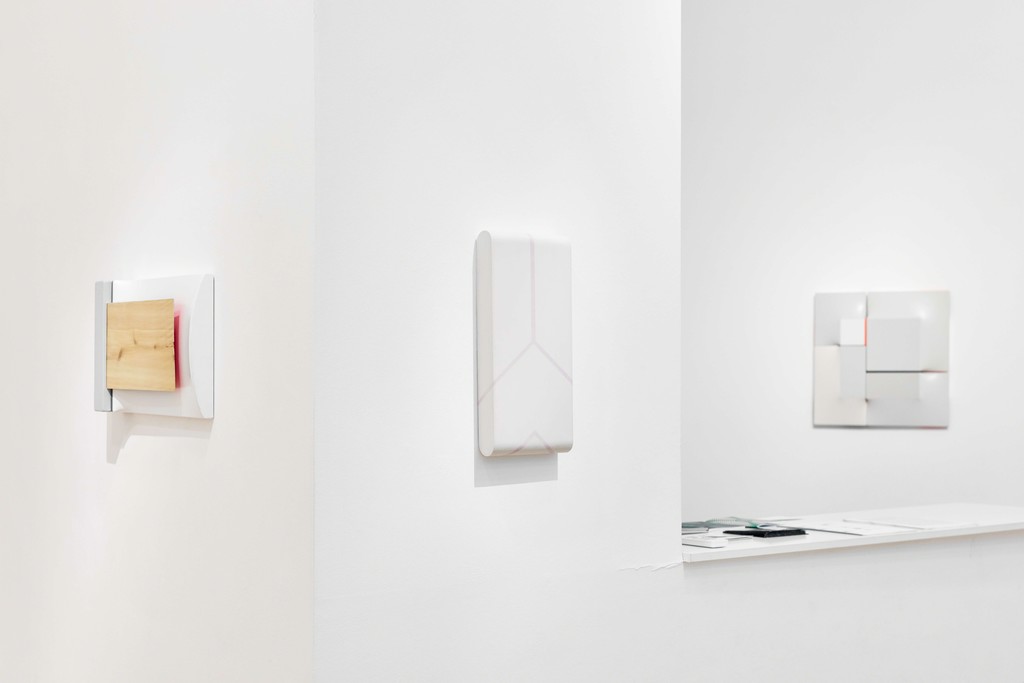 In his first solo exhibition at VILTIN Gallery, the artistic program of Árpád FORGÓ (1972) takes shape through his unique artworks group along the nodes crystallized over the past decades.
FORGÓ’s abstract career emerging from his painterly works had unfolded during international residency programs following an intensive material experimentation period. Prompted by these experiments of the mid-2000s, the exploration of the panel’s spatial possibilities has recently become the focus of his creative practice. He investigates the boundaries of the traditional genre framework’s shared with sculpture.
In his structures built of pure colors and monochrome surfaces, the artist elaborates the issues raised by post-painterly abstraction in the context of the international contemporary painting. His style can be on one the hand linked to the concrete tend of the geometric abstraction in the first two decades of the post-war period. On the other hand, his distinctive form-set connects to the Western-oriented geometrical tendencies of the Hungarian neo-avant-garde as well. However, his unique craftsmanship and anthropomorphic scaling differentiate his art both from the local and the foreign protagonists.
While geometric abstraction focused significantly on the metaphysical qualities evoked by the spatial effect of the image field, concrete art, in the meantime, endeavors to direct the attention on the object like character of the image by its radical change in scale. FORGÓ's approach is, however, related to the concrete artistic concept of emphasizing the artwork’ self-reflectiveness and its object status, yet we cannot regard him as the linear successor to that perception. His shaped canvases accentuating the craftsmanship are of consistent human scale. He examines the space of the image through its real body, through the possibilities of the canvas stretched on the frame. His controlled sculptural structures focus on the consistency of line, surface, color and, scale.
Questions concerning the shape and the image as spatial composition have increasingly been articulated in FORGÓ’s creative attitude committed to painting in the form of structured artwork cycles simultaneously with the experimental use of the material. Both the modules inaccurately fitting to the wall with their painted back reflection and the box-like opened image spaces have object properties.
The gradually geometrizing grooves of biomorphic compositions rooted in nature’s visual appearance brought first depth into the dense oil plane of the rectangular panel. Following the surface experimentation, the shaped canvases and the module based works meant the radical opening up of the image structure. The vivid, asymmetric acrylic surfaces have accommodated a dynamic, shape-oriented approach. The modular pieces of FORGÓ reflect best the central role of the structure marking the physical space. The works composed of separate parts create harmony with their integrated shape along with infinite variability. The rigorous geometric logic and playful design inherent in the individual pieces become accessible to the viewer through their colors, which also separate and interpret his spatial experiments.
The key role is assigned to craftsmanship in the works of FORGÓ, which includes both the painting process and the frame construction as well. Parallel to his geometric motif set, which operates with the dimensional shifts of the image depth he conceives form entities disintegrated using mathematics enabling the viewer to access the creative logic.
Based on arithmetic objectivity, his latest series demonstrates a strong sensual imaging strategy as well. The silky gloss and the significant spatial intonation of the modest square, monochrome acrylic surfaces giving the variations of each other unfold their dynamic image spaces in series.