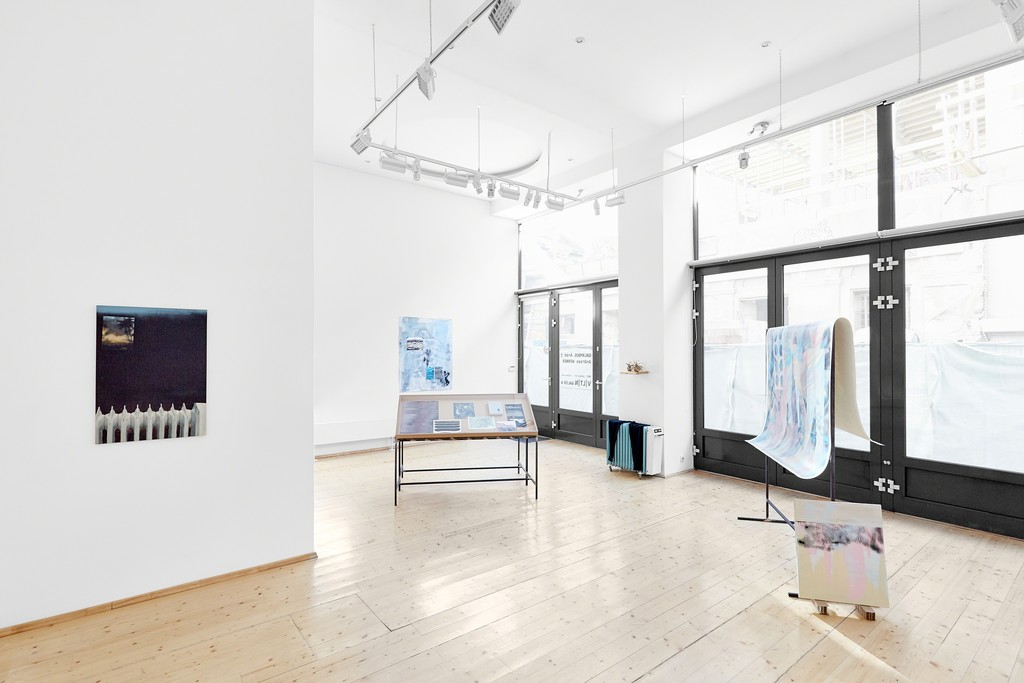 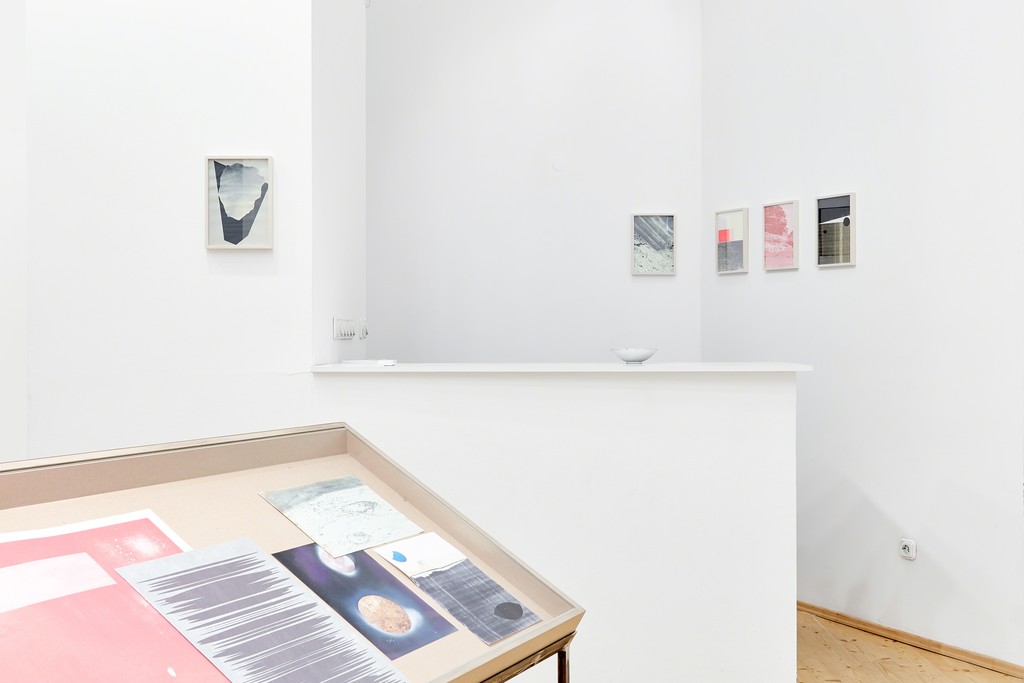 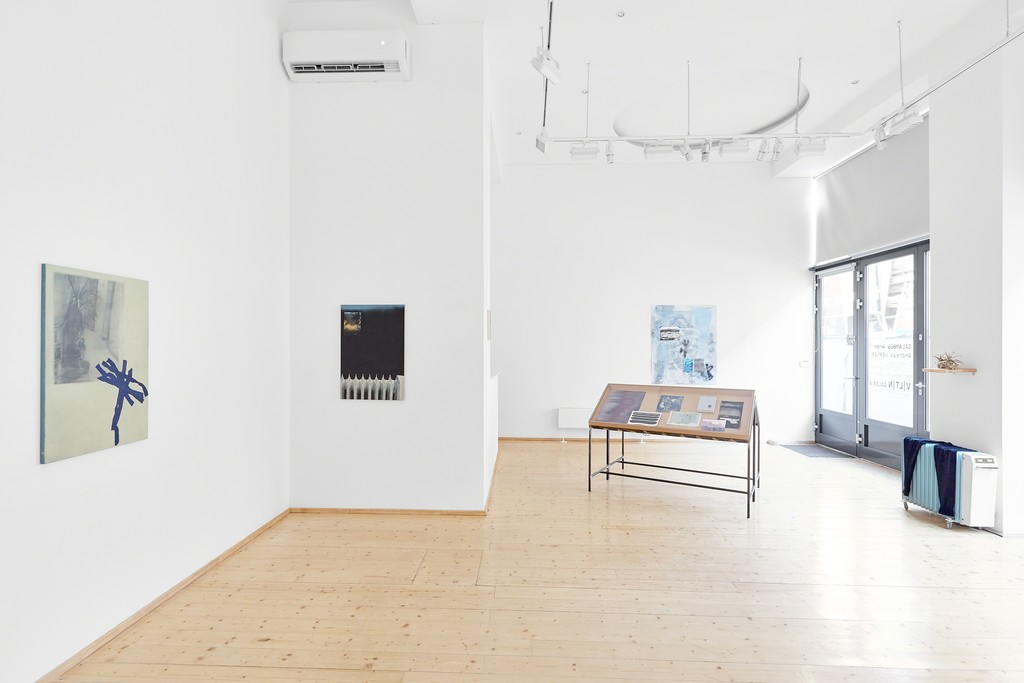 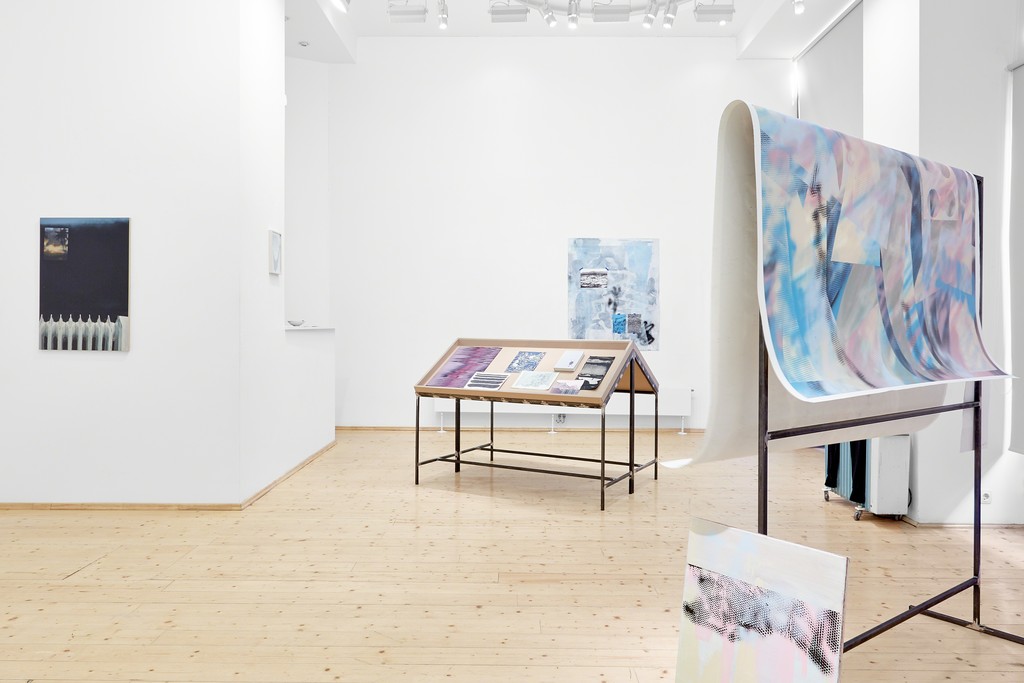 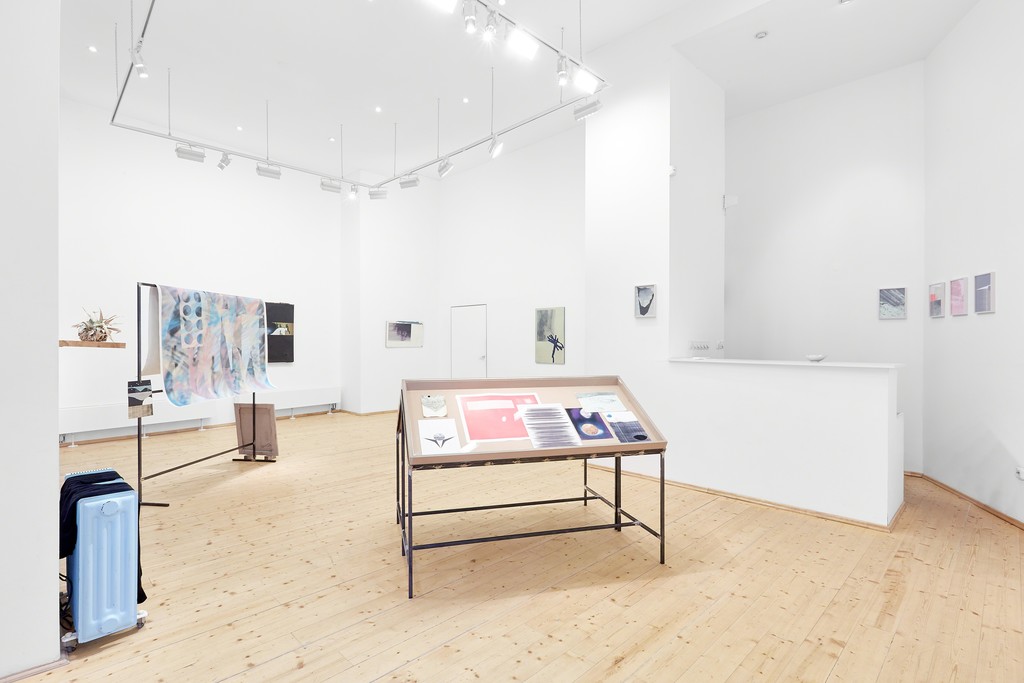 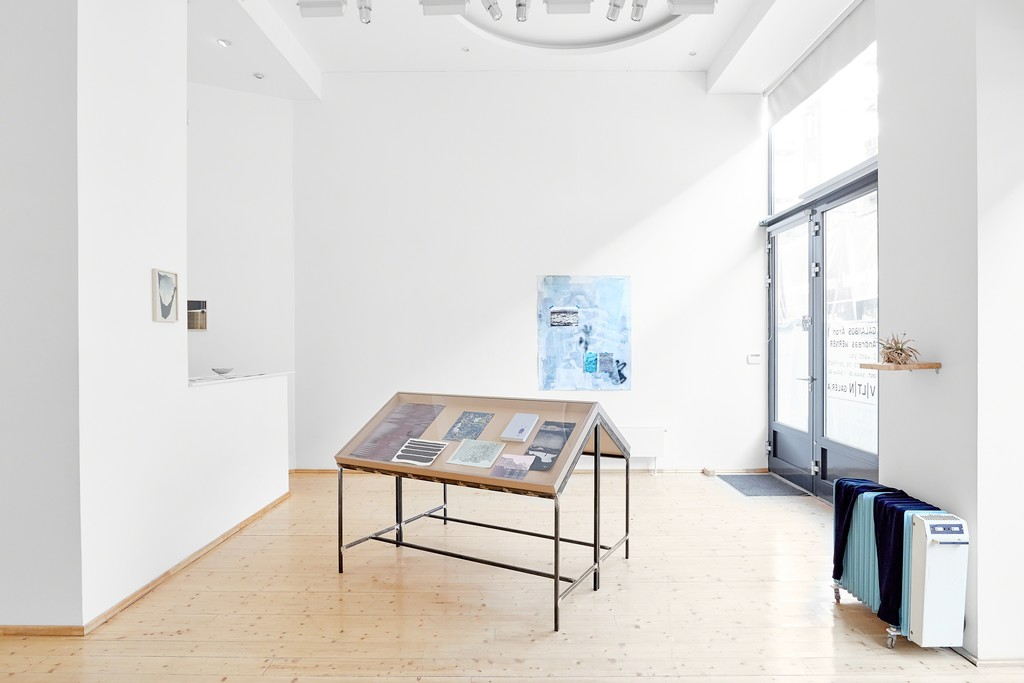 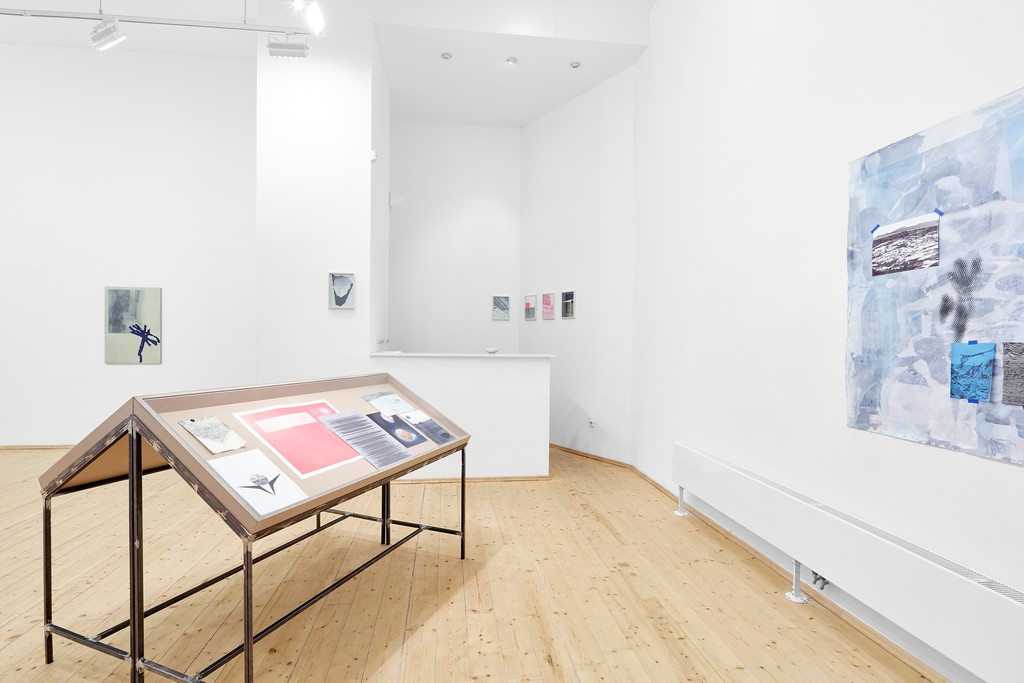 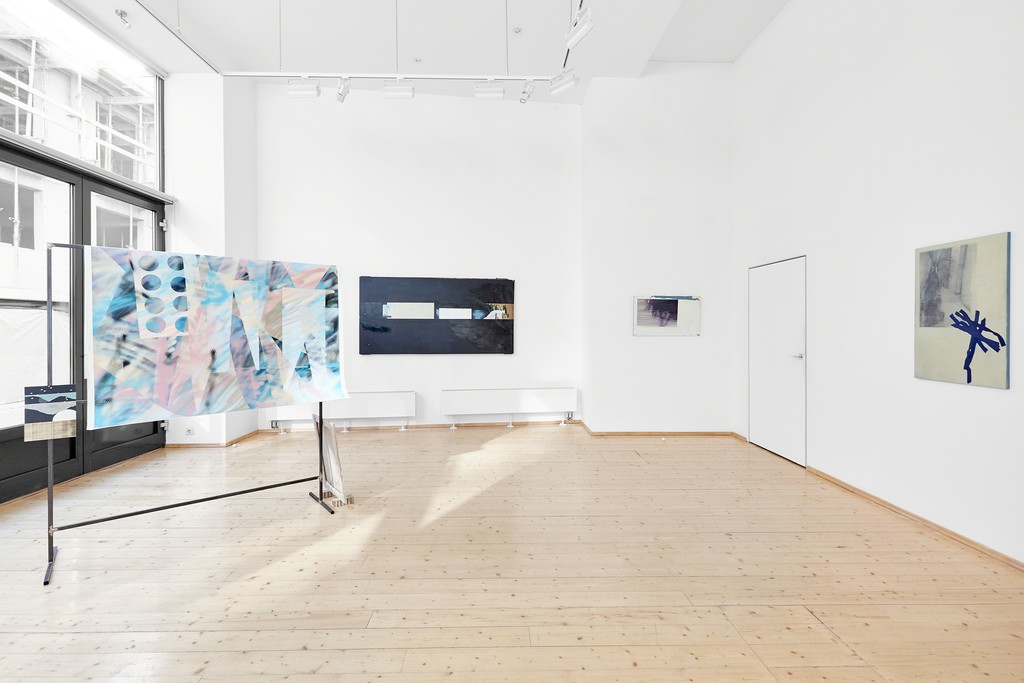 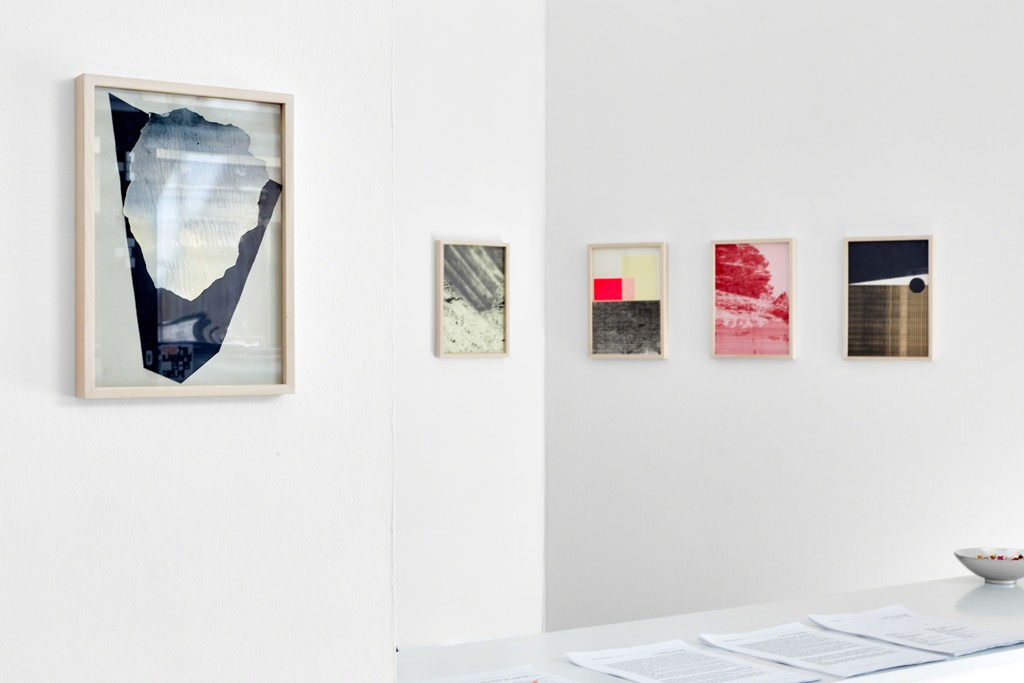 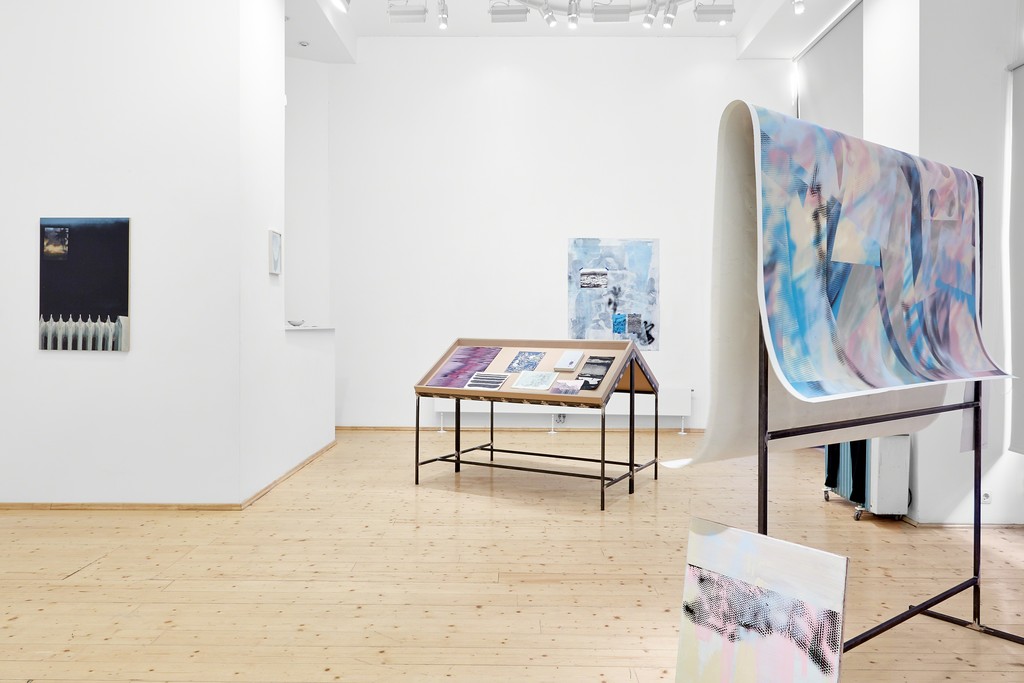 The principle of Áron GALAMBOS’s and Andreas WERNER’s medially varied works of art can be approached by its non-narrative, pastel-toned yet expressive and rich visual quality. The artistic and scientific focal points of their enquiry appear in both dominantly abstract motif-set including also figurative elements.
GALAMBOS develops his pictorial vocabulary primarily by the tools of painting, while WERNER creates his outstanding imagery by combining graphic techniques. The wide medial horizon of both artistic practice center in the perfectly finalized piece of artwork and have multilayered references to classical paintings.
Framed by the scientific atmosphere of the cabinet, Andreas WERNER’s set of small-scale paper works can be considered as contemporary artefacts. An anthropological status report of a fictive space colony – brought up in the human cultural heritage - in which the artworks replace the fossils. This utopian idea captured in the cabinet implies not only the future but raises awareness of our recent cultural routines as well. WERNER’s sheets incorporating the characteristics of Romanticism and science fiction are displayed as archeological evidences. Shifting from mountain ranges to depicting interstellar panoramas, this selection is also linked to the German romantic landscapes as his previous paper series. The documents of WERNER’s pseudo-scientific aesthetic universe lead the visitor to the installation, raising questions about the medium-based hierarchy of the genres. The graceful steel construction investigates the relation of painting and works on paper by reversing their traditional order and usual scales. Featuring both painterly and graphical qualities, the flat surfaces require a heavier yet ethereal volume as freestanding installation.
The large-scale paperwork synthesize the two different spatial presentation. Applied on the rough gestures of the picturesque background, the macro-patterns of the finely detailed pencil drawings are close-ups taken from a cosmic perspective.
The homogeneous acrylic surfaces of Áron GALAMBOS paintings open in a window-like field. Due to this pictorially method the tight spatial effect of the frontal picture-plane implicate a further perspective, leading us far beyond the walls of the room. The recurring palm tree portrayed with graphite, oil or photographed, gives characteristics to his most recent pieces. The palm-motif expands the space for association right from the tiled and airless staircases of the post-soviet era through the exotic climate of the tropics.
The constellation of the home-found objects titled ’your life’ demystifies the artistic inspiration in a very truthful way. The wilting yuccas in the room overheated by the oil radiator are both muses and dried-out weeds. The tension between the seemingly negligent set of items and the accurate paintings reveals the artist’s struggles with accumulating the spleen of every days into one single picture.
Besides involving the privacy of his room, GALAMBOS also integrates the semi-public space of the studio in his large-scale work. He captured a casual studio enterieur in the middle lane of the widescreen-like composition. By painting over a used blackboard he is not only reflecting on the traditional format of the genre, but also on the often vacant decorativeness of the geometric abstraction.

Andreas WERNER (1984, DE) lives and works in Vienna. He graduated from the Graphic Arts Department of the Academy of Fine Arts Vienna as a student of Gunter Damisch’s class (2012). Among many international residency participations, he spent longer periods in the frame of the Lower Austria Art Scholarship and the Krinzinger Projekte in Hungary since 2015. He received the MUSA Award for Young Art from the City of Vienna and the Recognition Prize for Fine Art by the State of Lower Austria in 2016.
His works are included in several private and public collections (Collection of the State of Austria - 21er Haus Vienna, Collection of the city of Vienna, Academy of Fine Arts Vienna) and in the permanent collection of the Budapest History Museum – Budapest Gallery of Contemporary Art as well.

GALAMBOS Áron (1986, HU) lives and works in Budapest. He graduated from the Painting Department of the Hungarian University of Fine Arts Budapest (2012). As one of the most talented young artists of his generation, he was granted the UniCredit Bank Scolarship in 2013. He was nominated for the Esterhazy Art Award in 2013 and in 2015 as well. Besides his solo show held in Budapest two years ago, he also participated in several group exhibitions, among others at the New Budapest Gallery, Museum of Fine Arts and at the Institute of Contemporary Art Dunaújváros (HU).