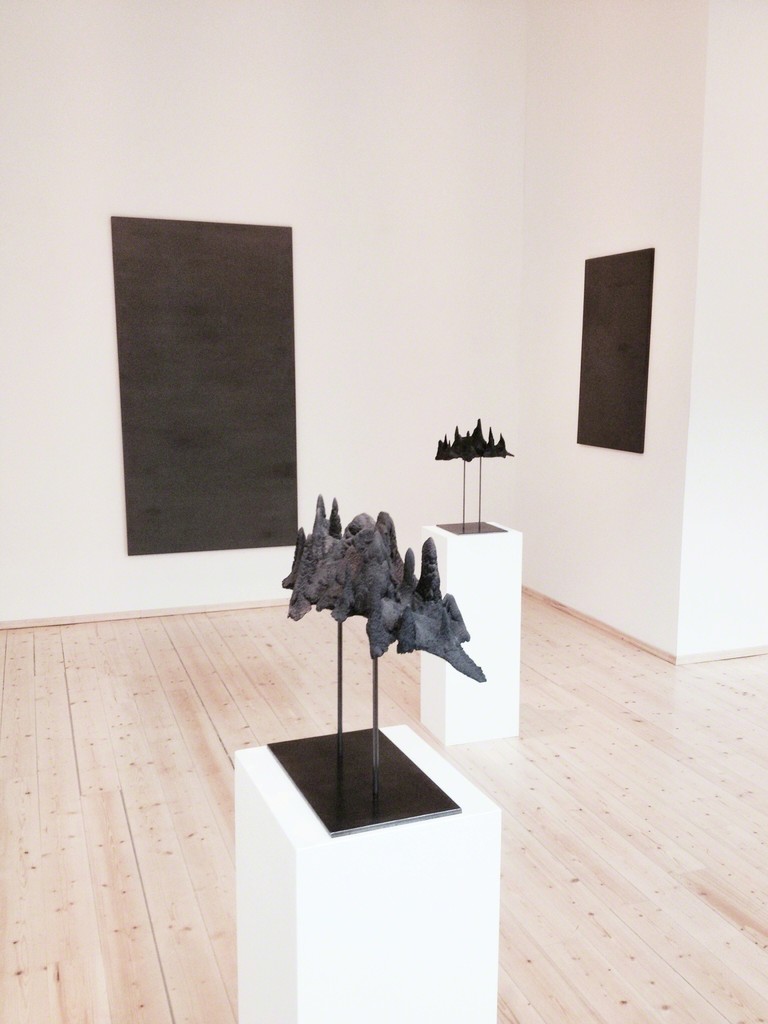 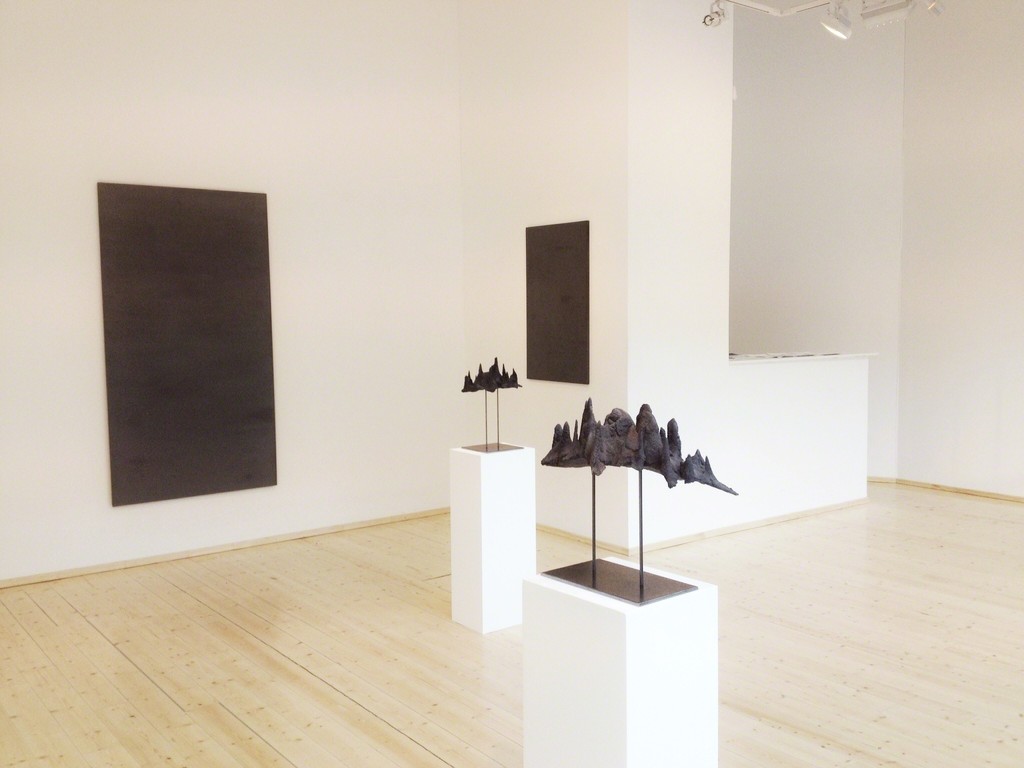 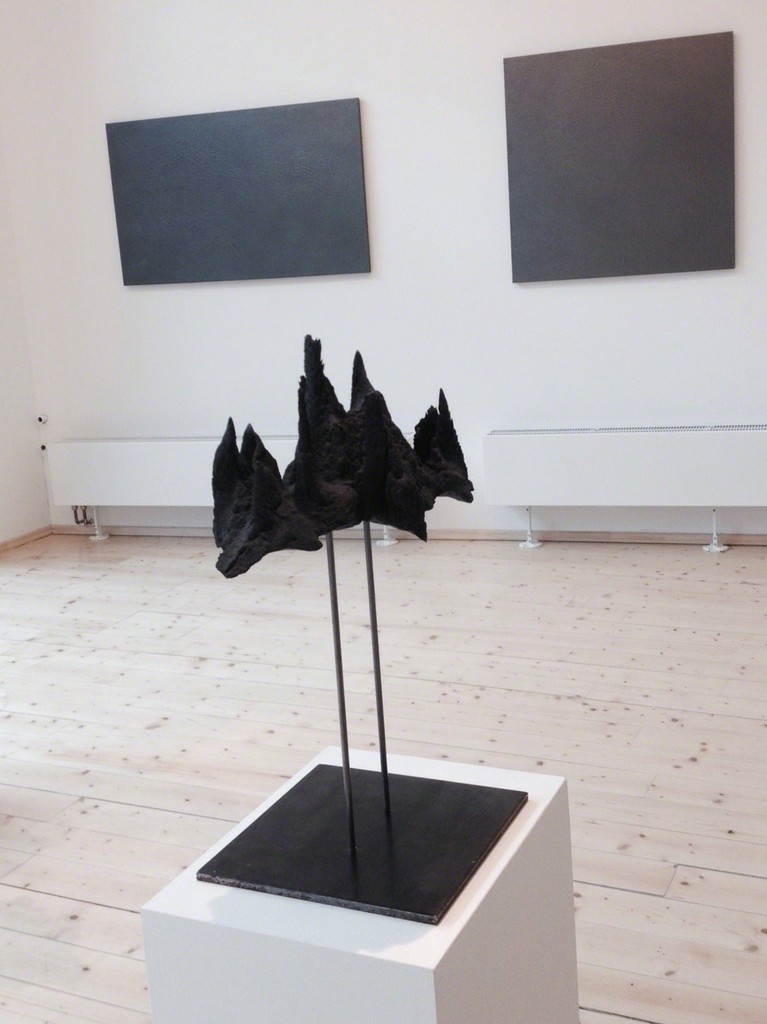 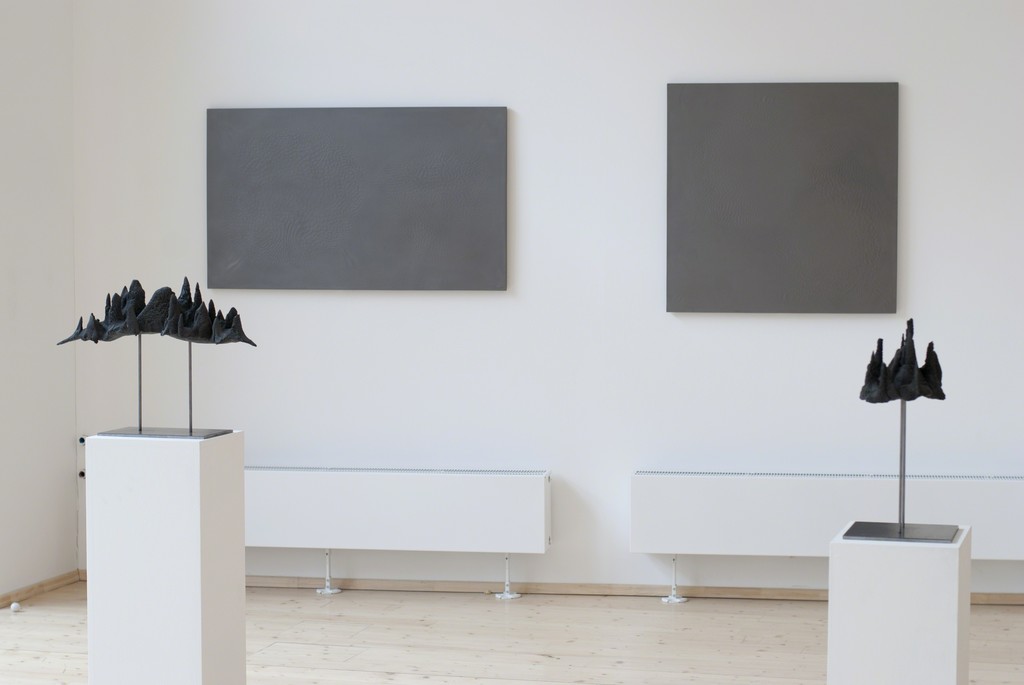 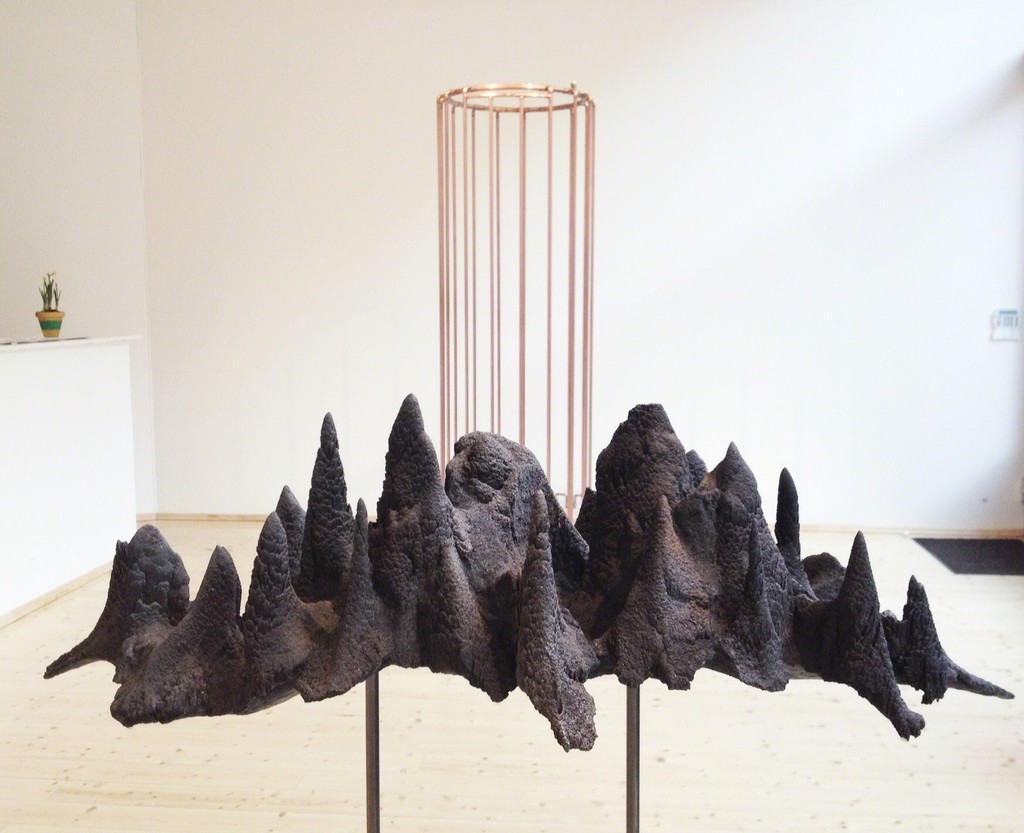 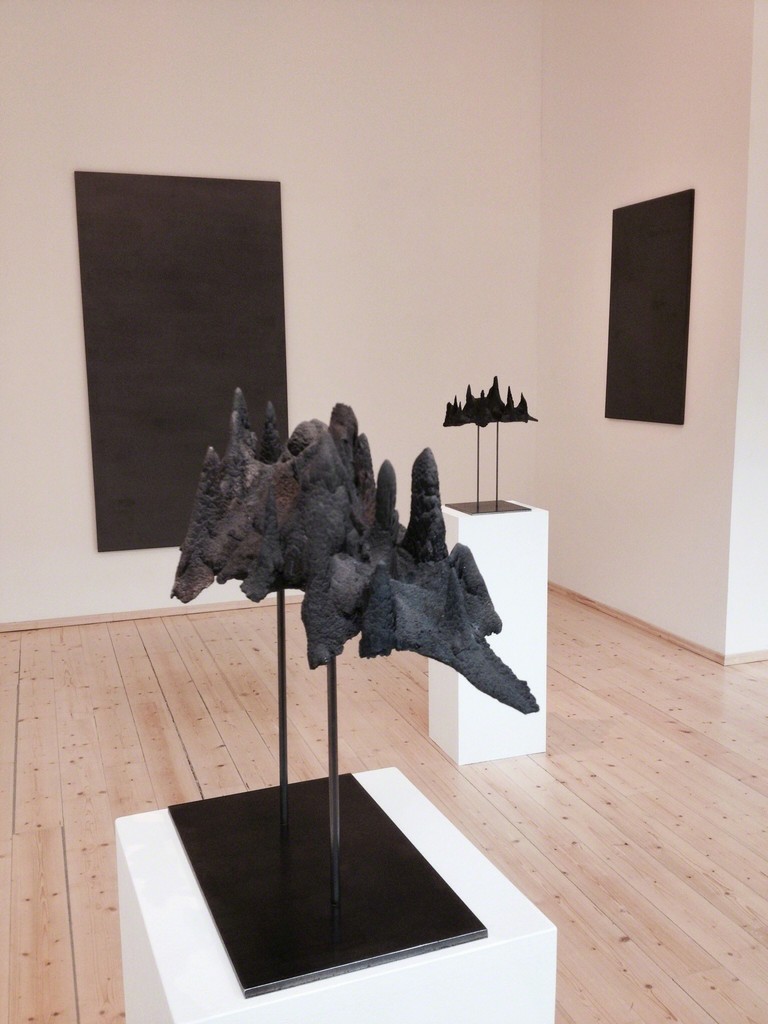 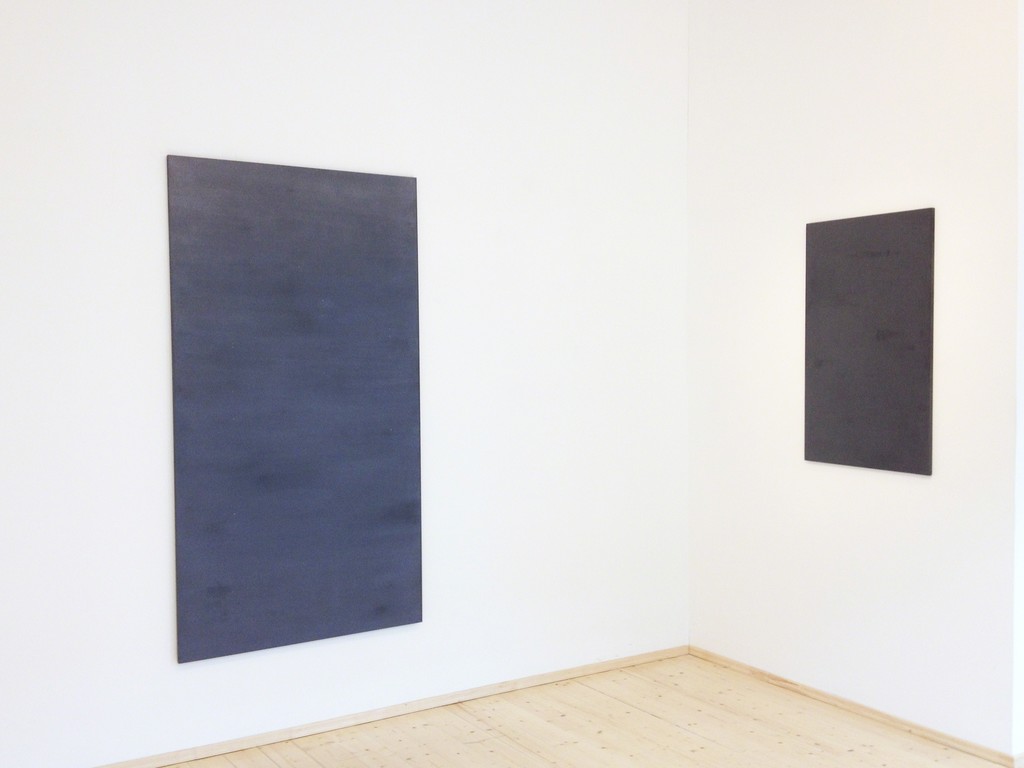 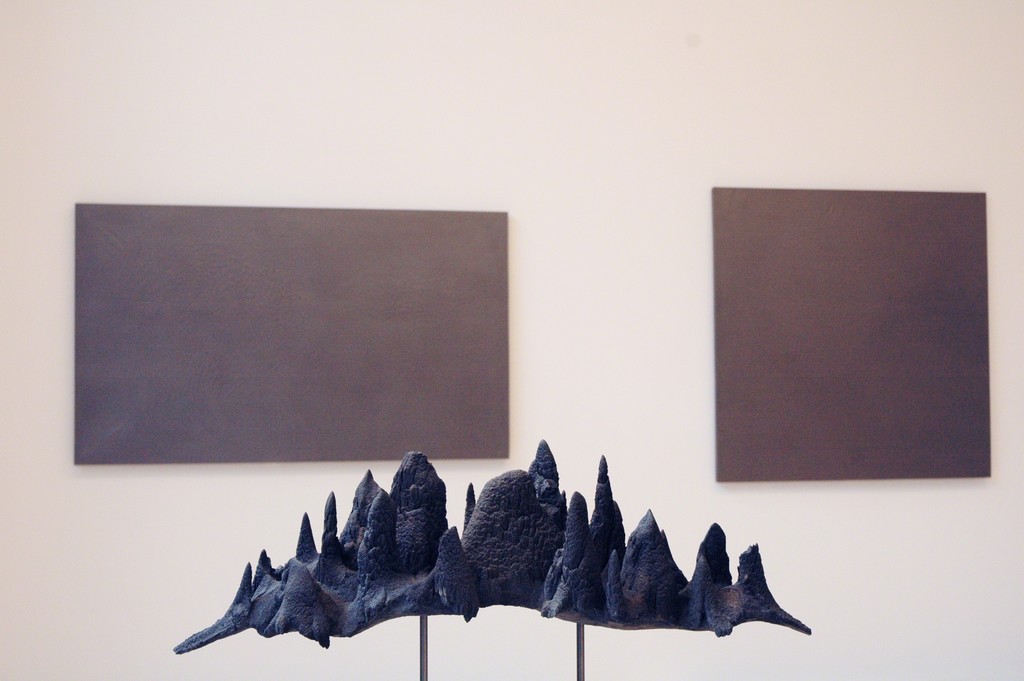 ’There’s no mercy.’ or ’No merci.’
Showcasing the latest works of Gyula BADITZ, the artist frames his sculptural metaphors reflecting on the social and ecological problems of our world. The statuette, the embossment and the autonomous sculpture, which can partly be perceptible as readymade, compose a comprehensive, compact unit in the exhibition. The elements of his present installation show a more conceptual direction compared to his earlier works.
Can a person be free? The artist compasses the issue of freedom, as the equivocal title ’No Merci’ also sug-gests. The dominant artwork of the exhibition is the immersive cage. Attached to the heating system of the gal-lery, it warms up its environment recalling the warmth of our home. At the same time, it is an explicit indica-tion to the notion of prison. A world in which a shiny cage is beautiful, attractive and comfortable but still closed, obstructing our movements. What direction we build the world where every sign alludes that we increas-ingly close ourselves?
The visual presence of mountains in the gallery raises the question of spiritual freedom. The mountain that can be considered the metaphor of strength, purity and relation to God, at the same time, it is the symbol of soar-ing conscience. May the individual be free? Does the freedom of conscience exist at all? We do not see sublime, sky-high mountains. The silent mountains of BADITZ are made of iron and they are burnt-out. The falling water drops hidden in the large embossment give equivocality to the installation, bringing us also a possible response to our question. Defining them as tears, they indicate the general distress of the artist to his close and wide environment. Whilst as raindrops, they prolifically soak the sun-baked mountains and imply the possibility of rejuvenation.
Gyula BADITZ exercises his right to plain speaking and to artistic freedom through his sculptural means formu-lating poetical metaphors. The artist expresses his worries about the current state of our society. He canvasses by the revival of collective responsibility for the environment. At the same time, his sculptures manifest so-phisticated, high craftsmanship and clear visuality of a sensible artist.
Baditz Gyula was born in 1972, he graduated from the sculpture department at the University of Fine Arts (Budapest) in 2000. He was awarded the Gyula Derkovits scholarship and the scholarship of the Hungarian Academy in Rome. He has taken part in many solo and group shows, his works are in major Hungarian and international pri-vate collections.