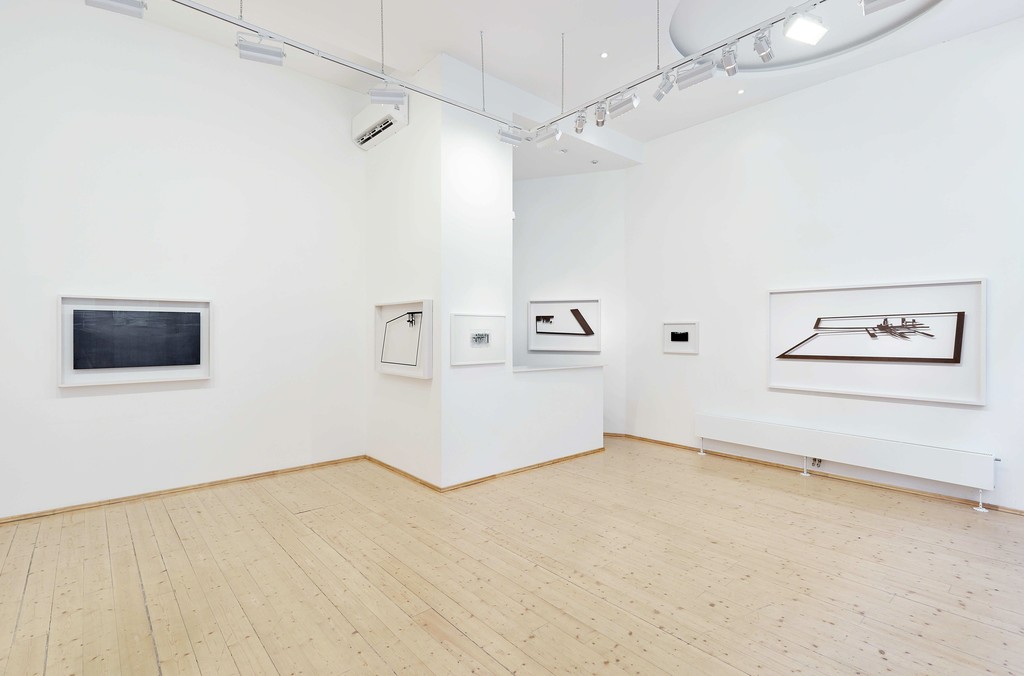 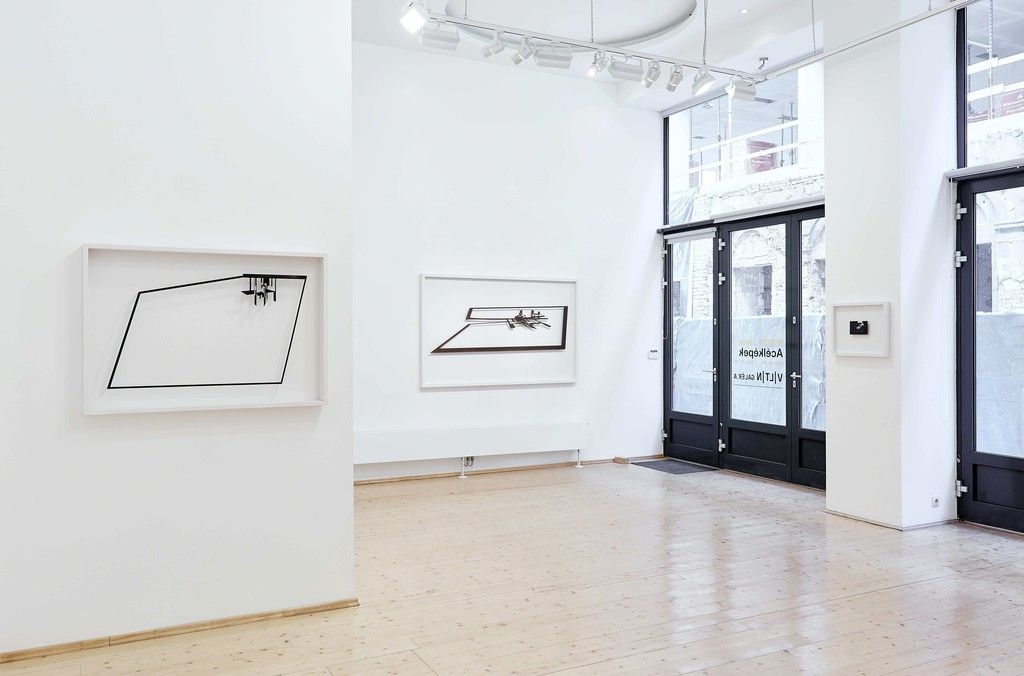 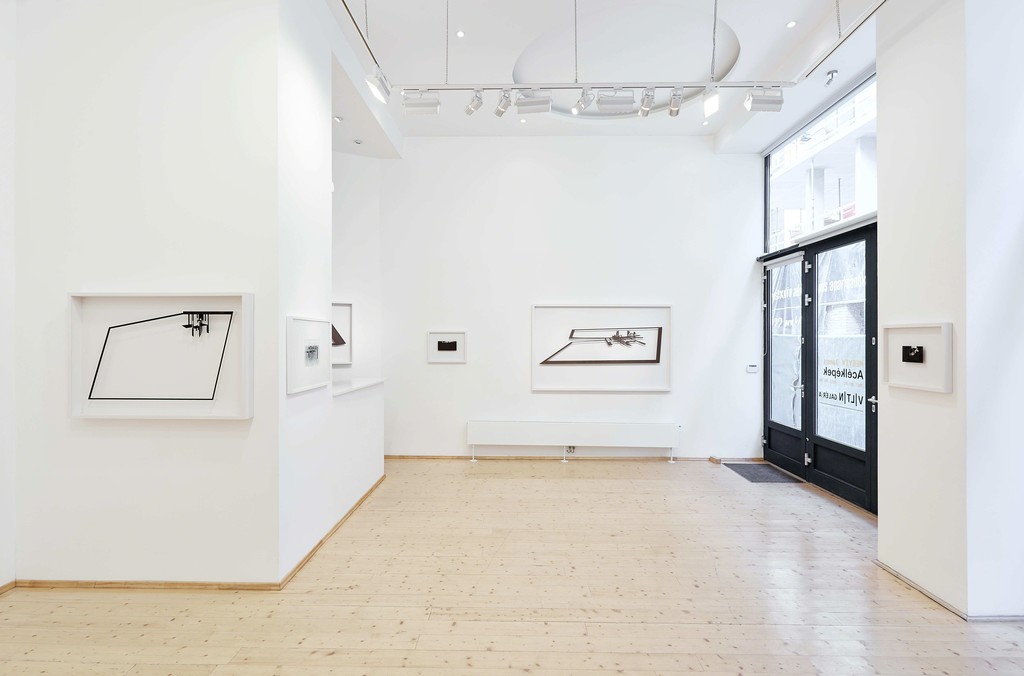 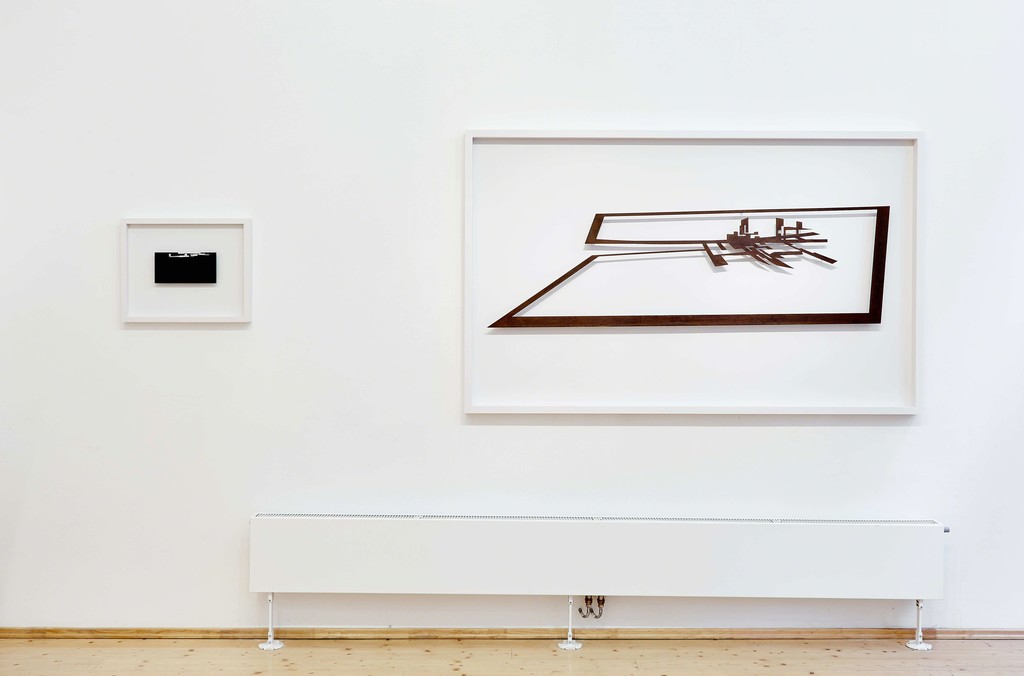 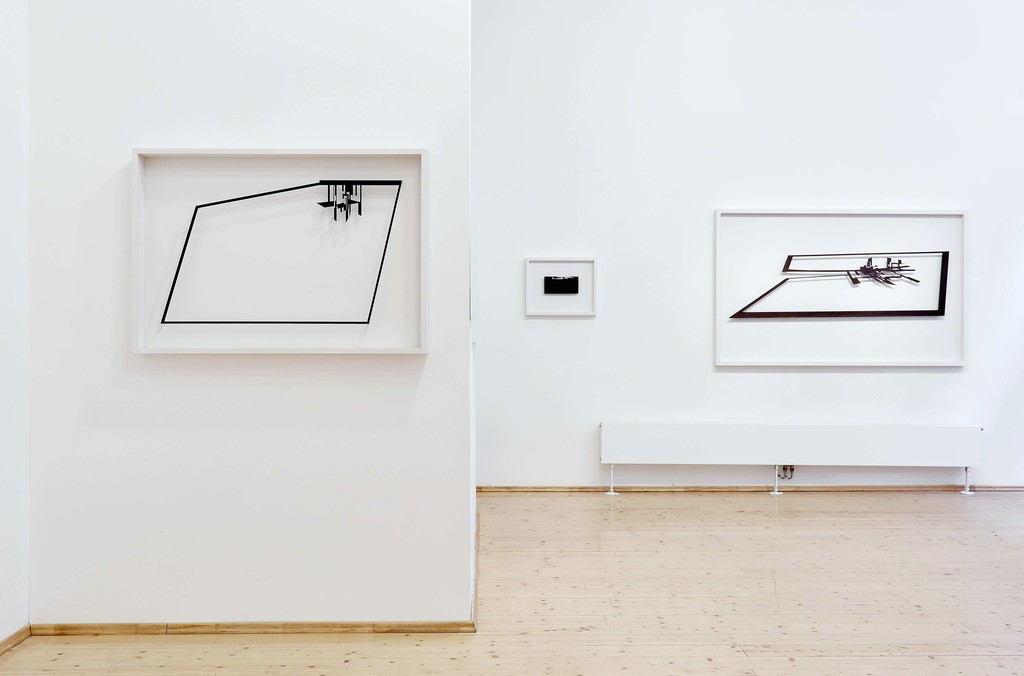 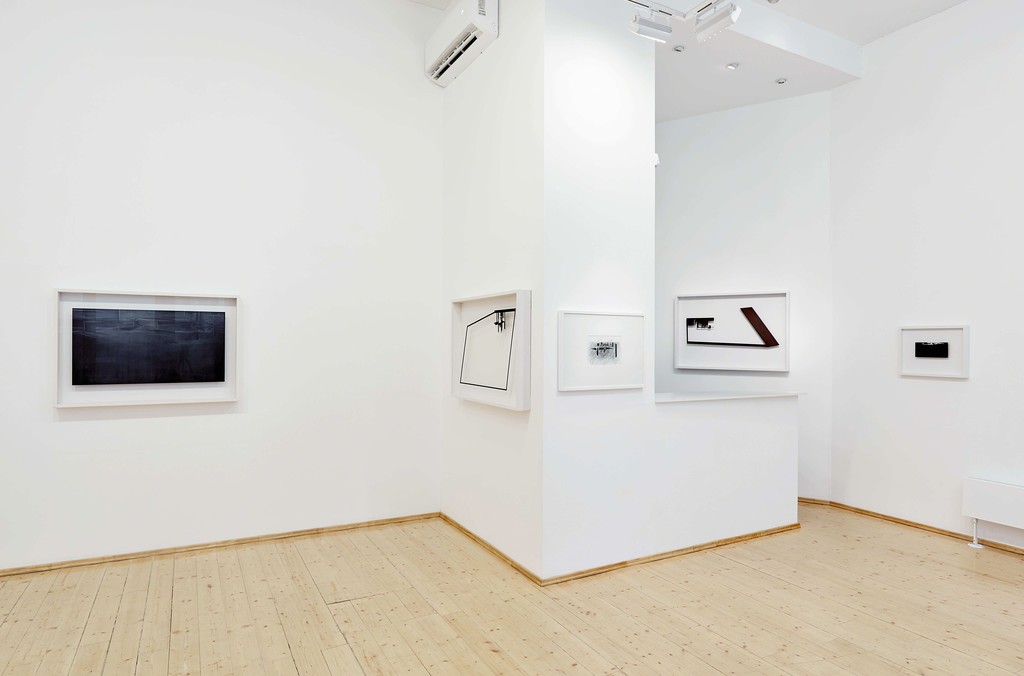 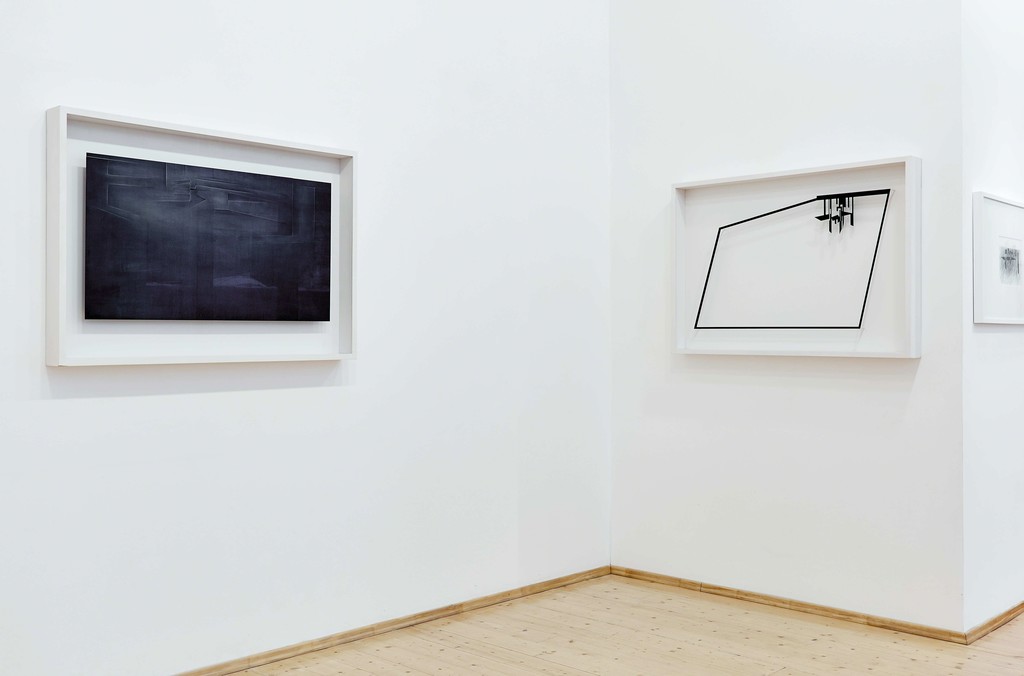 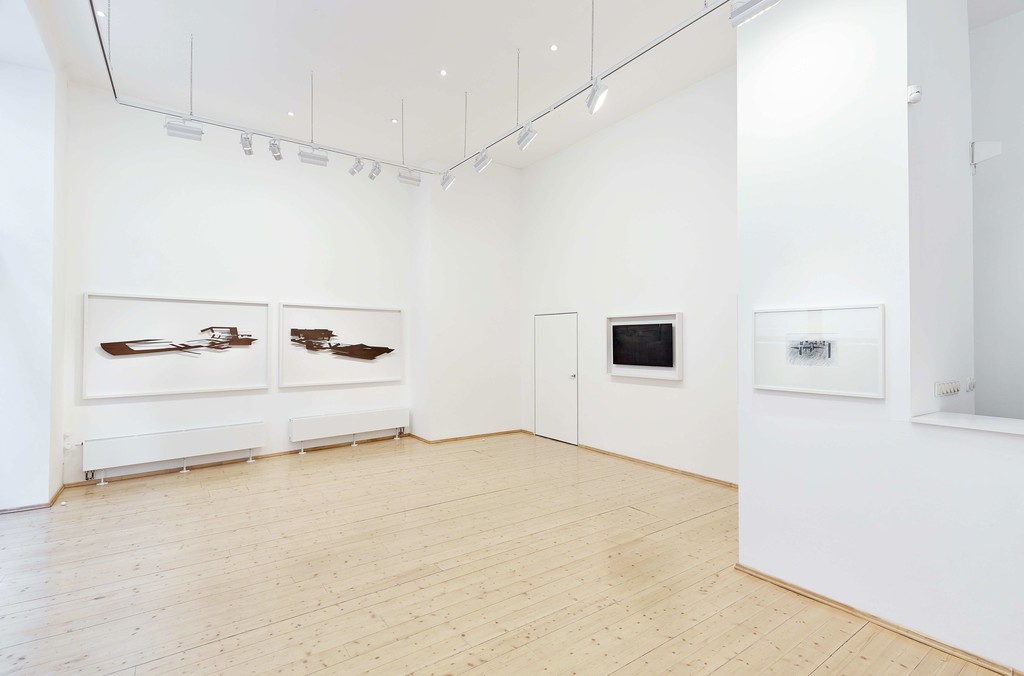 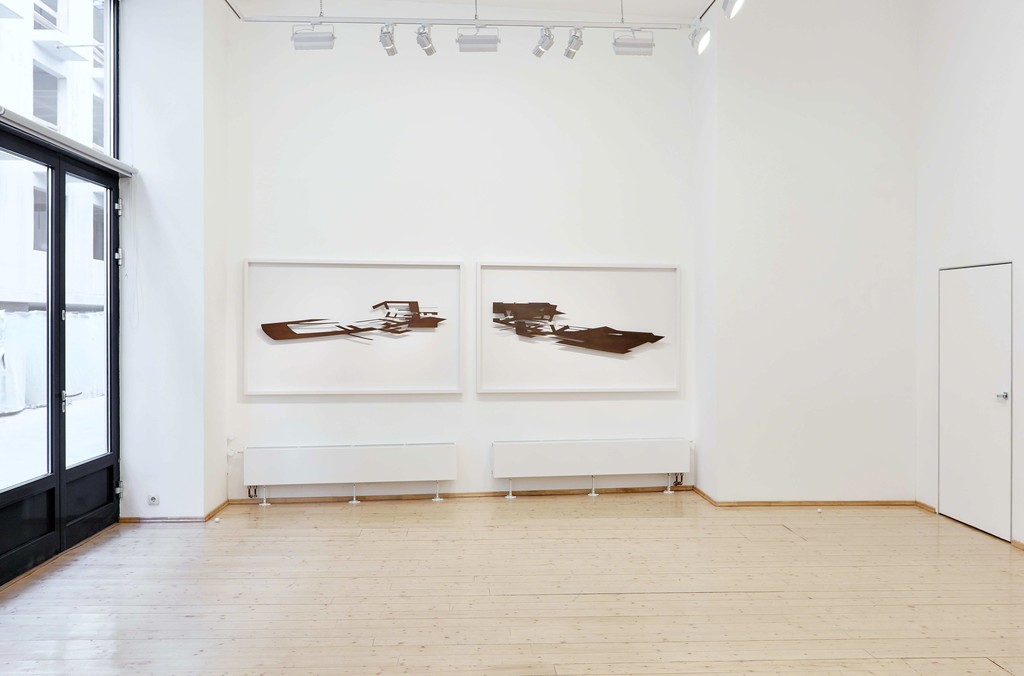 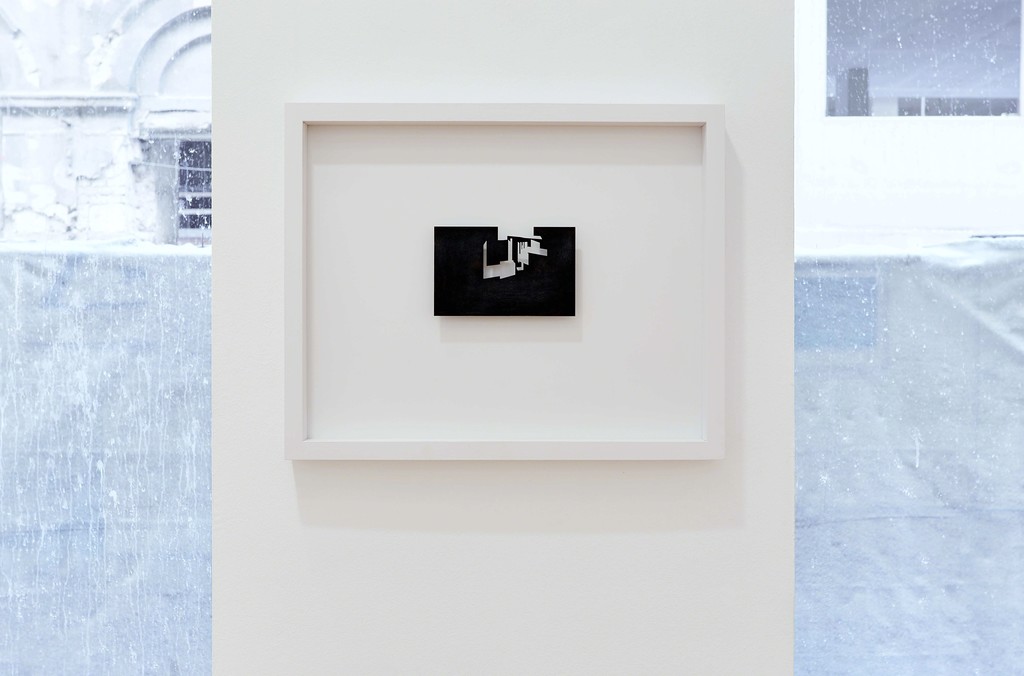 "Geometry is an ambivalent phenomenon: mere imagination until it is visualized as a model or a built construction."

The independent, subjective and lyrical geometry is the principle of Megyik’s artistic practice. The artworks of the renowned representative of new geometrical tendencies – according to his above cited thought - can be characterized by the structural modelling of the traditional painting, the transformation, the love and appreciation of drawing as well as capturing the subtle state inspired by shape and material.
His researches derive particularly from the transformation of perspective lying on the Euclidean geometry: studying either Paolo Uccello’s or Leonardo’s paintings, Megyik develops his emblematic space constructions based on his own drawings interpreted by the rules of projective geometry. (The encouragement came exactly from fine arts to develop this section of the Mathematics, where the emphasis is on the intersections of the line pairs instead of their parallelity.)
As result of his artistic research, he built small size stick and large scale wooden beam constructions in the seventies and eighties. According to the artist, he realized the models of these paintings, which he considers spatial geometric drawings. Placing and exposing then these constructions on photosensitive paper, his emblematic photograms were born. This transformation led him creating again two-dimensional works we interpret as poetic light drawings in their abstraction and picturesqueness.
The recent steel works he has been working on since the late nineties draw a parallel with his photograms of the eighties. The steel pictures continue to carry his previous method of modelling. They combine the image of the model and the empty frame by extending the rules of the projective geometry. The artist’s attention is also devoted to the facture of the steel. Each piece currently on view have a unique pictorial quality by the applied blackish patina or the natural tone of corrosion on the steel surfaces.
Like his earlier works, the steel pieces feature the interrelation of fine art and architecture. At the final stage of the artistic procedure, Megyik limits the space of the finalized construction by framing. The gesture of enframing encourages the perception of the projective character of the image. His steel panels and frames are at all the weightless pieces of harmony and balance. In case of these pieces the deconstruction as artistic practice manifests itself on the edge of the material, right at the border between nothing and something.

János MEGYIK was born in Szolnok (HU) in 1938. He emigrated to Austria in 1956. He studied at the Vienna Akademie der bildende Künste and graduated from the Vienna Akademie Angewandte Kunst with a degree in painting, mural paintng and stained glass. Since the 1970s, he has been continuously participating on Hungarian exhibitions as well. He is awarded the Kossuth Prize in 2006. In 2007 he is elected the member of the Széchenyi Academy of Literature and Art. His retrospective exhibition The Space of the Image is held at the Ludwig Museum – Museum of Contemporary Art, Budapest in 2012.
His works can be found in major collections, among them: Albertina – Vienna, Hamburger Kunsthalle – Hamburg, King St. Stephen Museum - Székesfehérvár, Janus Pannonius Museum – Pécs, Kupferstichkabinett - Hamburg, Museum Liaunig – Neuhaus – Karinthia, Ludwig Múzeum – Museum of Contemporary Art – Budapest, Museum Moderner Kunst – Vienna, Hungarian National Gallery - Budapest, Museum of Fine Arts – Budapest.