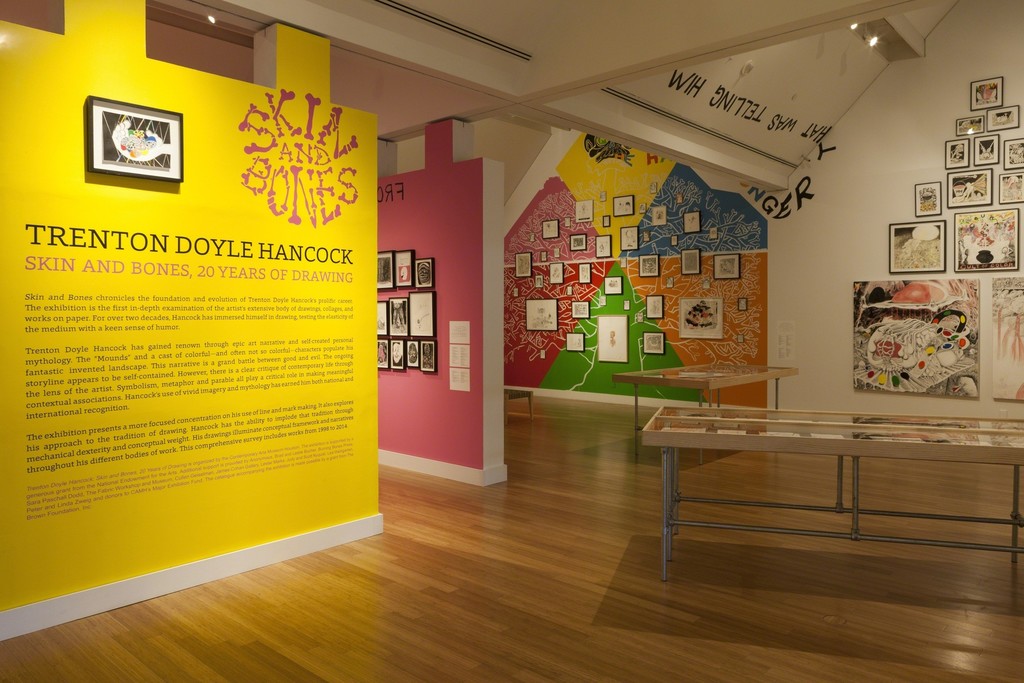 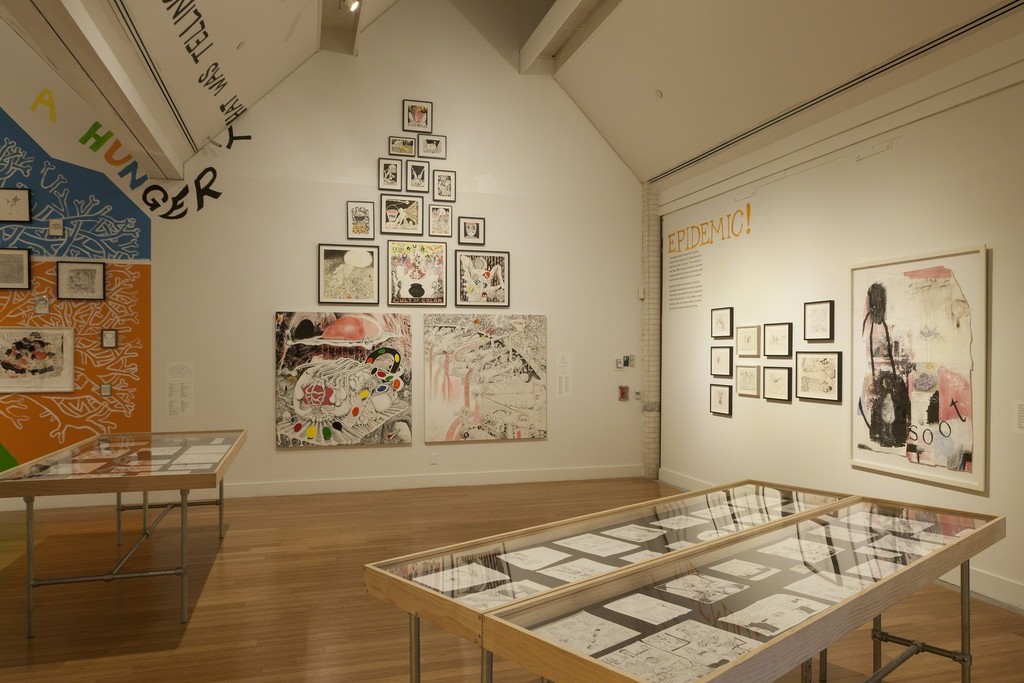 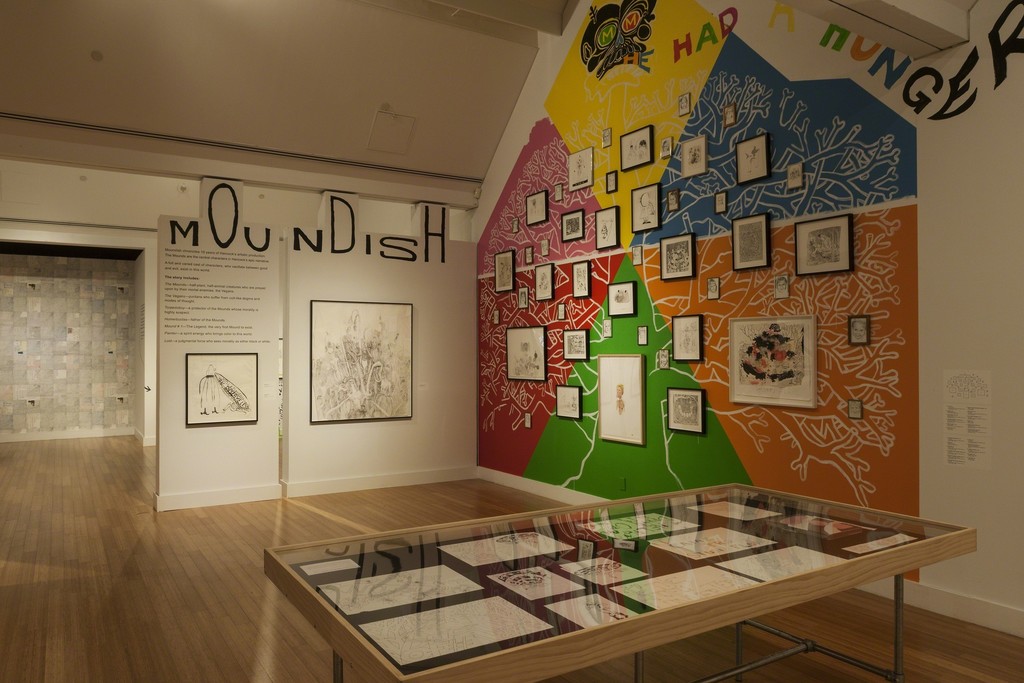 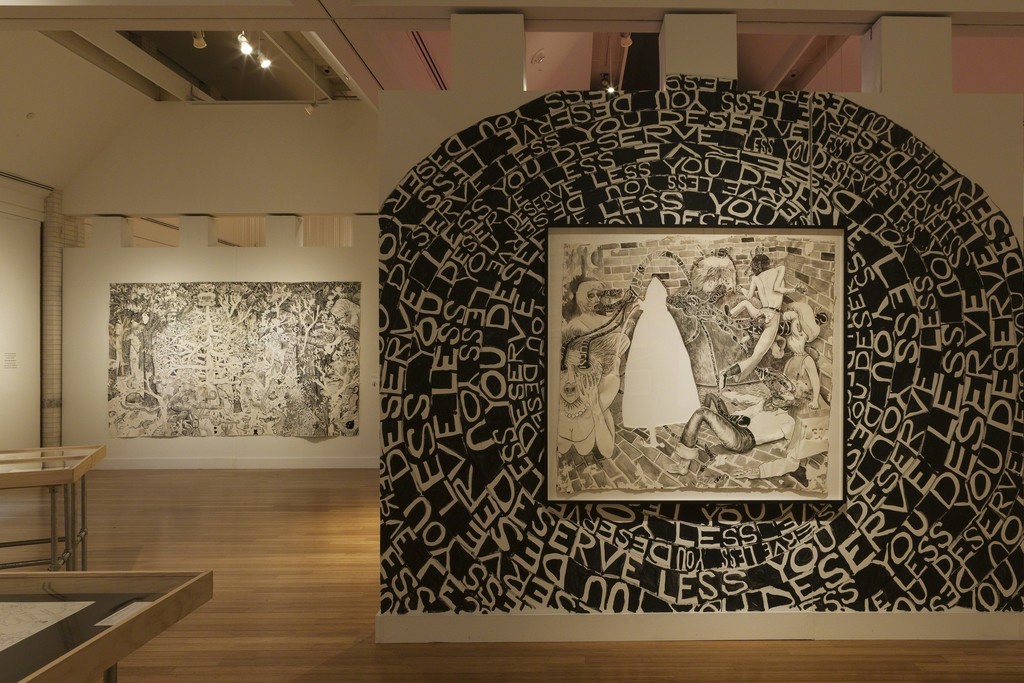 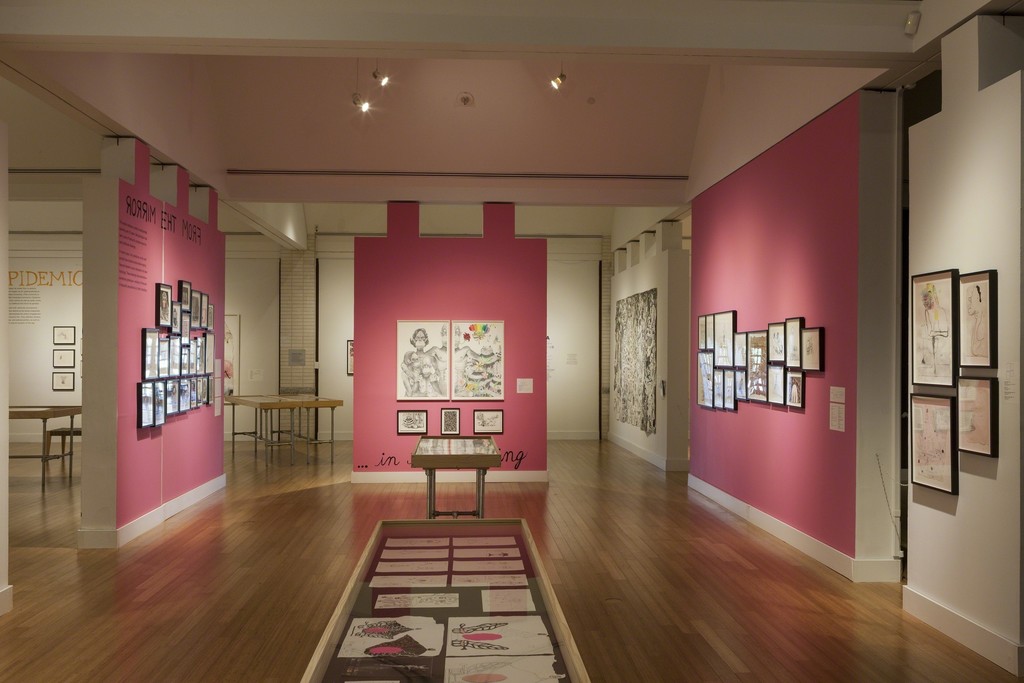 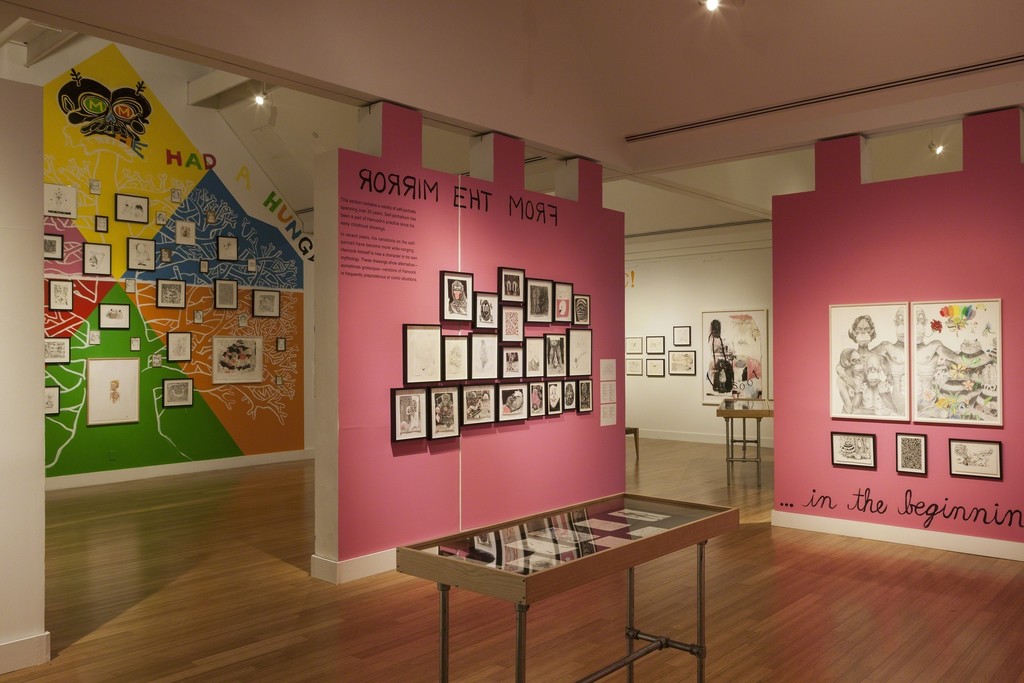 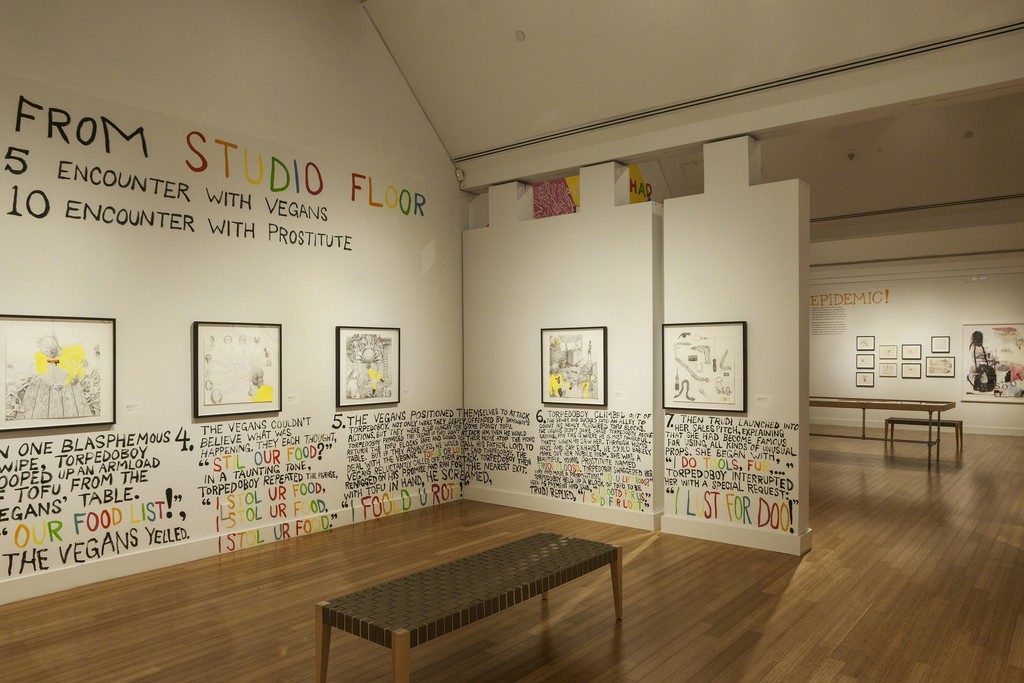 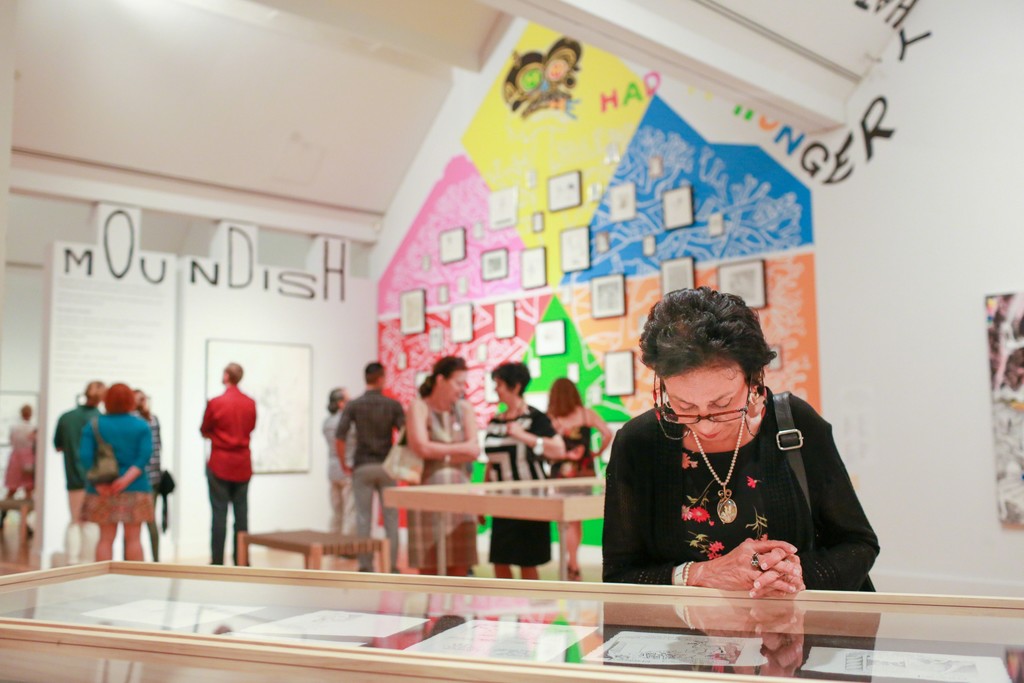 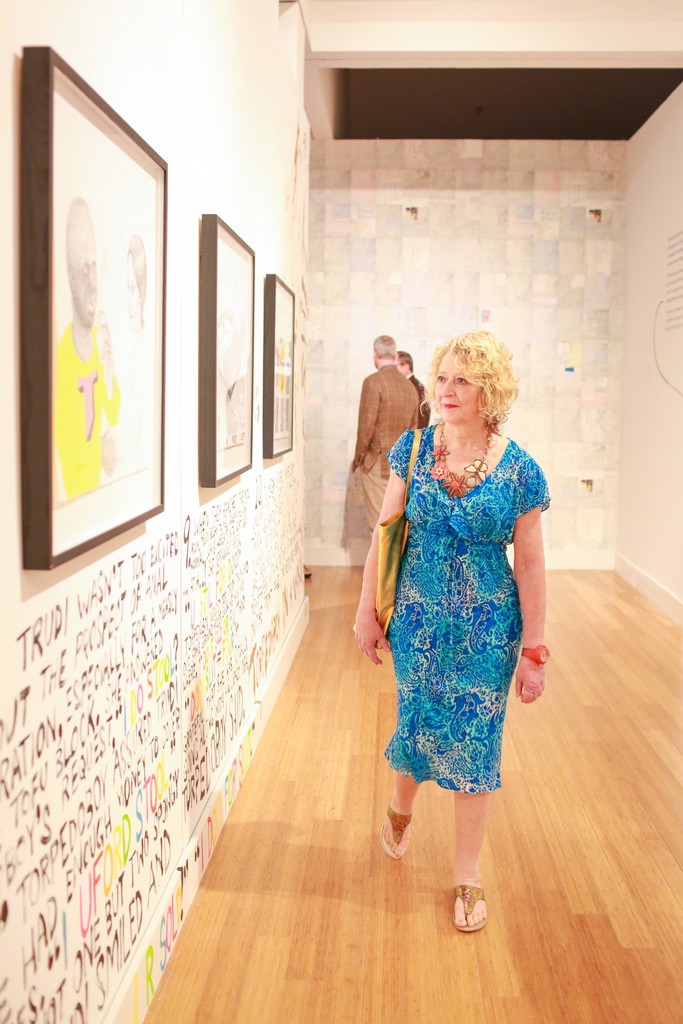 For almost two decades, Trenton Doyle Hancock has developed an epic narrative surrounding the “Mounds” and a cast of colorful—and often not so colorful—characters who populate a wildly fantastic, invented landscape. The artist’s use of vivid imagery and mythology has not only earned him national and international recognition, but has also revealed a fascination with the foundation of his practice. What emerges upon further examination is a wide-range of influences including comics, graphic novels, cartoons, music, and film. While Hancock’s paintings have become the focal point for investigation, his drawings–both discrete and monumental–have not been explored in depth before now.

Skin and Bones is the first in depth examination of Hancock’s extensive body of drawings, collages, and works on paper. Comprehensive in scope, this survey will include works from 1998 to 2014, ostensibly chronicling the foundation for the artist’s prolific career. Trenton Doyle Hancock: Skin and Bones, 20 Years of Drawing is organized by the Contemporary Arts Museum Houston. The exhibition is supported by a generous grant from the National Endowment for the Arts. Additional support is provided by Anonymous, Brad and Leslie Bucher, Burning Bones Press, Sara Paschall Dodd, The Fabric Workshop and Museum, Cullen Geiselman, James Cohan Gallery, Lester Marks, Judy and Scott Nyquist, Lea Weingarten, Peter and Linda Zweig and donors to CAMH's Major Exhibition Fund. The catalogue accompanying the exhibition is made possible by a grant from The Brown Foundation, Inc.

Trenton Doyle Hancock was born in 1974 in Oklahoma City, OK, and lives and works in Houston, TX. Raised in Paris, TX, Hancock earned his BFA from Texas A&M University, Commerce, and his MFA from the Tyler School of Art at Temple University, Philadelphia. Hancock was featured in the 2000 and 2002 Whitney Biennial exhibitions, becoming one of the youngest artists in history to participate in this prestigious survey. He had his first solo exhibition at the Contemporary Arts Museum Houston in 2001. His work has been exhibited nationally and internationally at venues including The Modern Art Museum of Fort Worth, TX; The Museum of Contemporary Art, North Miami; Institute for Contemporary Art at the University of Pennsylvania, Philadelphia; The Studio Museum in Harlem, New York; The University of South Florida Contemporary Art Museum, Tampa; The Fruitmarket Gallery, Edinburgh; and Museum Boijmans Van Beuningen, Rotterdam, The Netherlands.