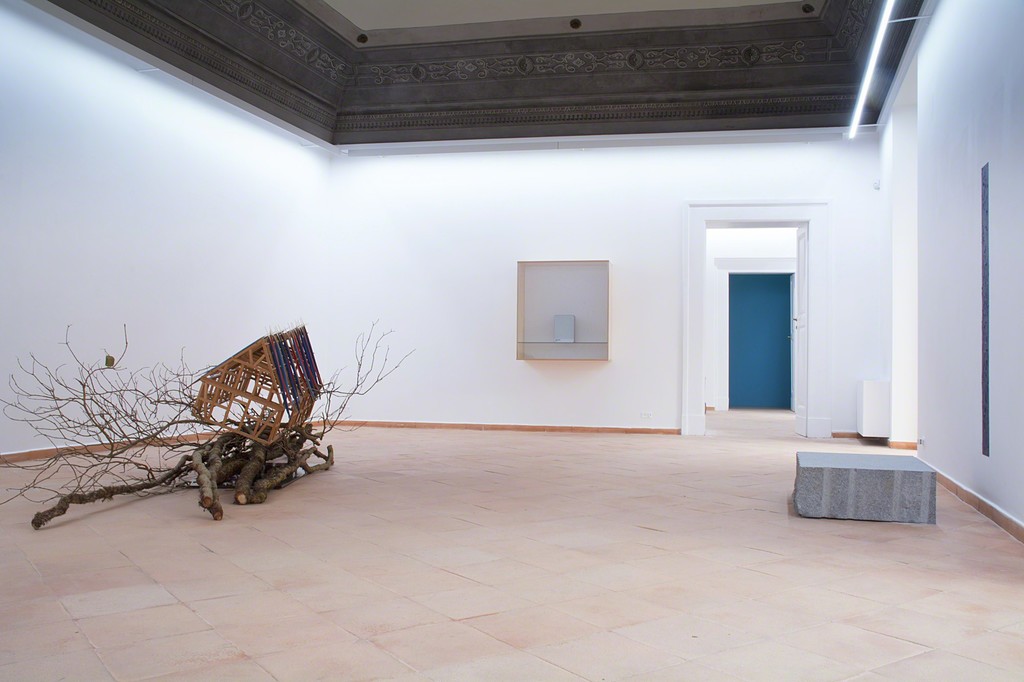 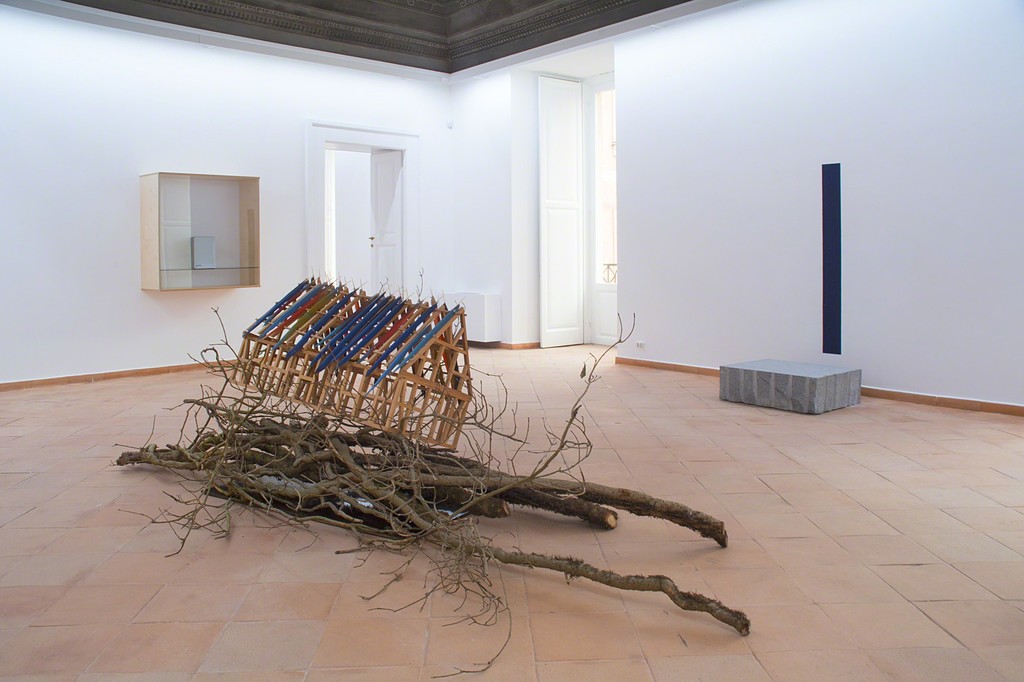 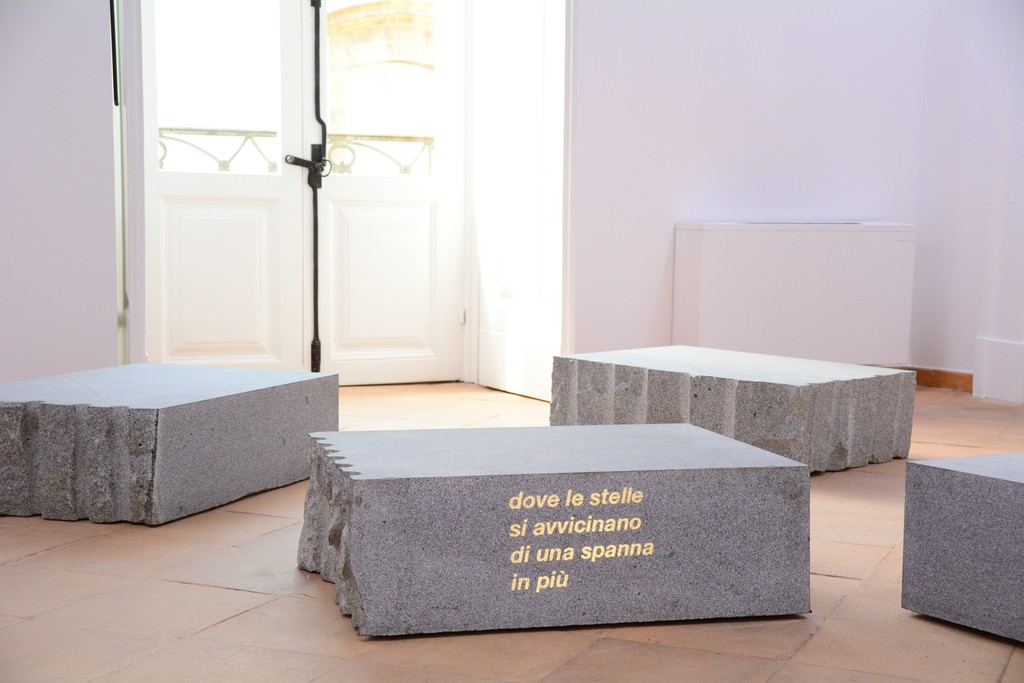 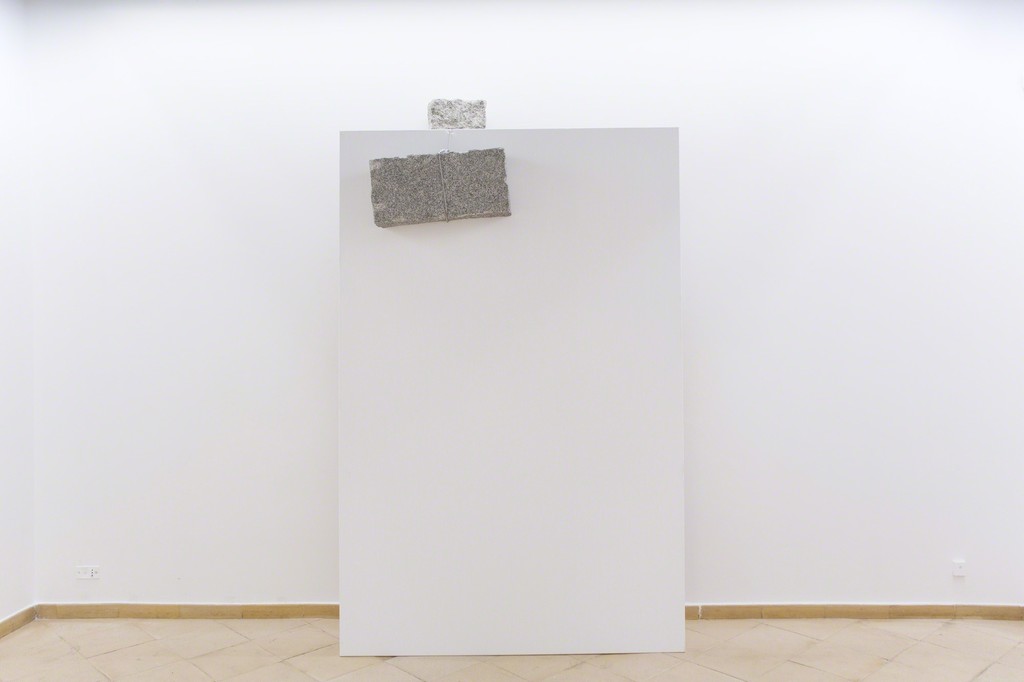 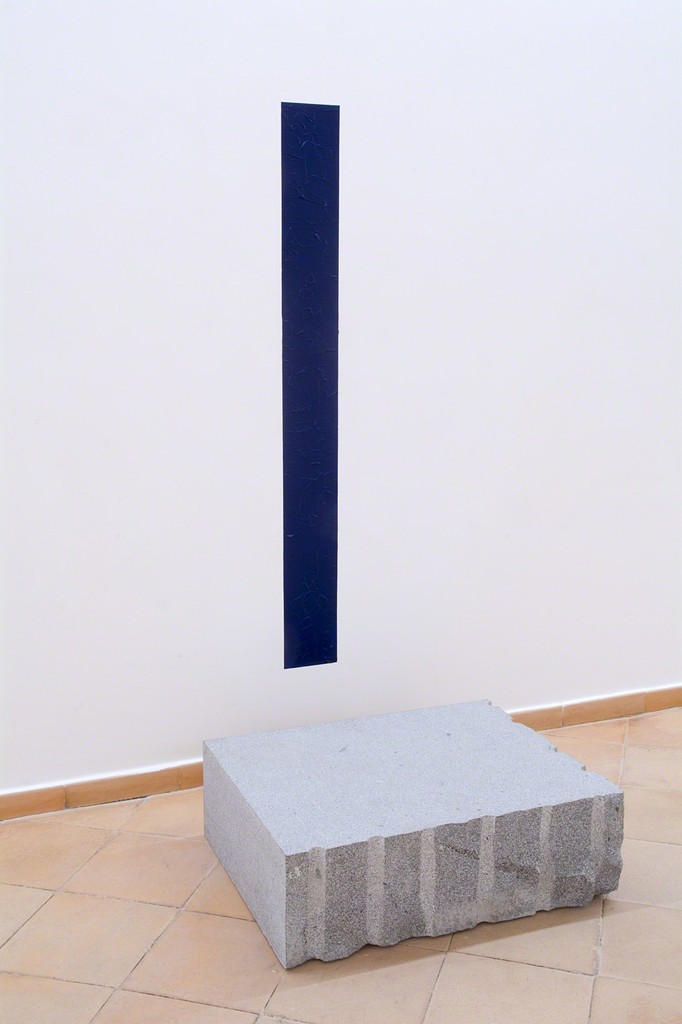 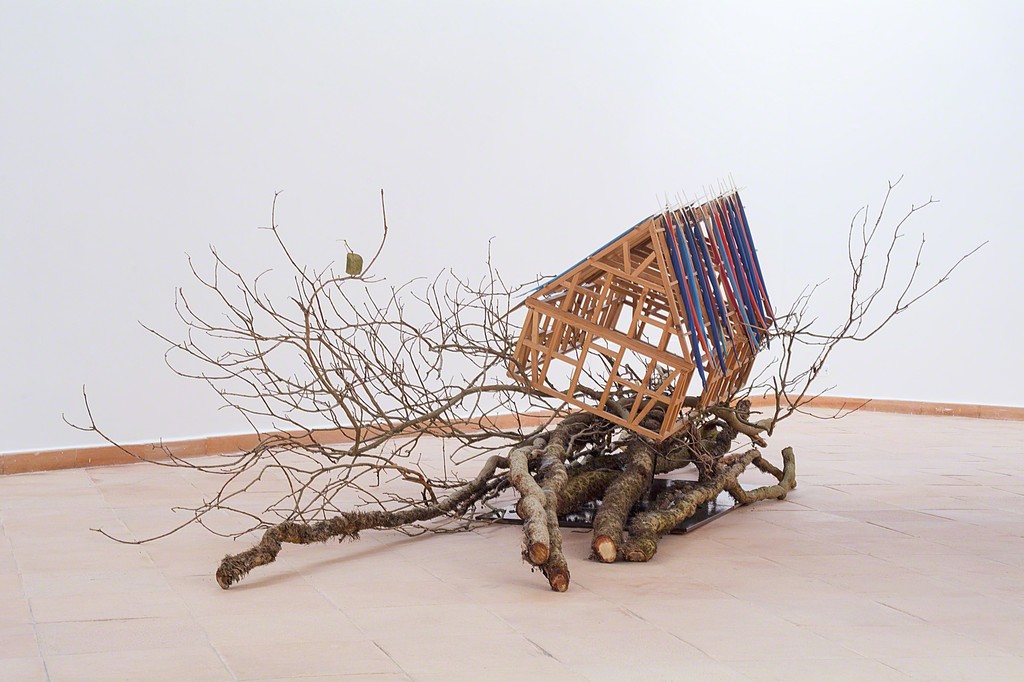 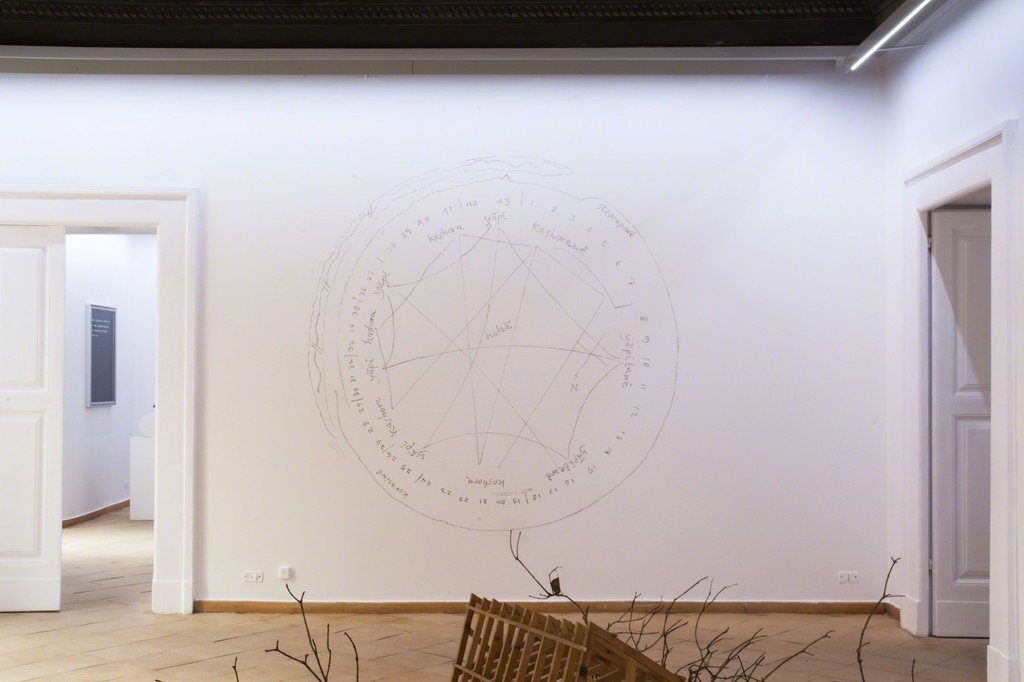 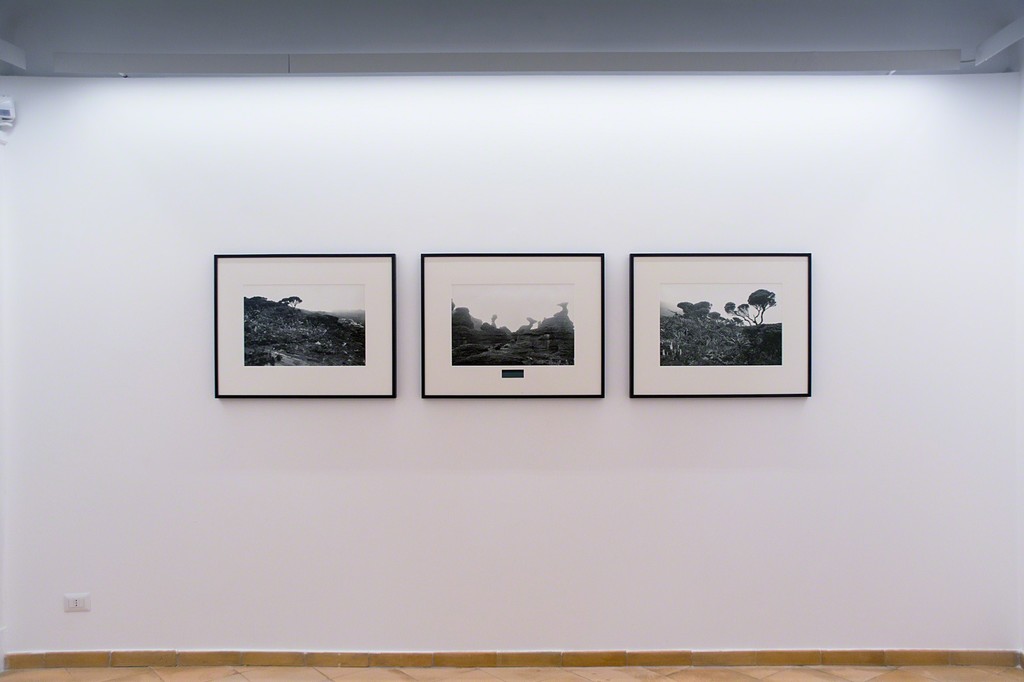 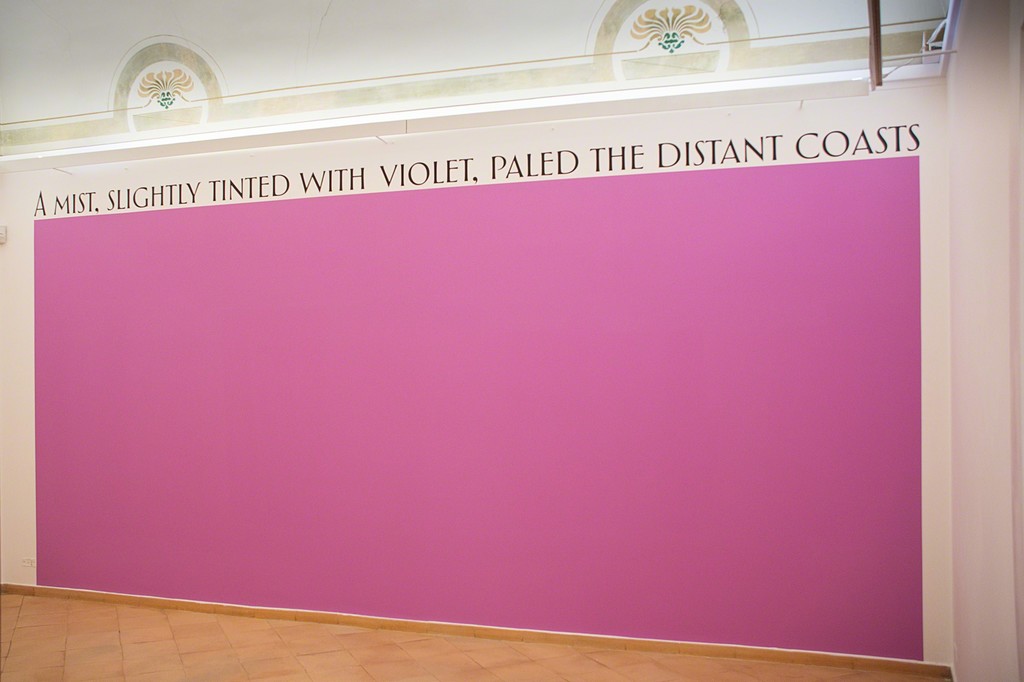 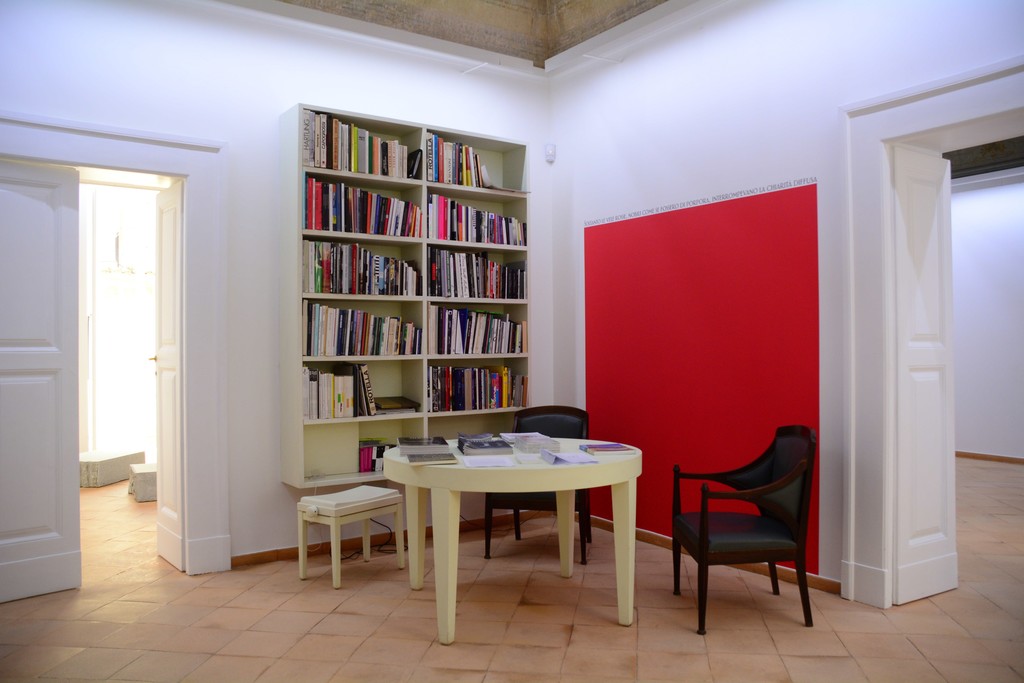 On Saturday 1st July 2017 Galleria Vistamare will inaugurate an exhibition featuring the work of three major international contemporary artists: Giovanni Anselmo, Lothar Baumgarten and Haim Steinbach. Despite their evident differences, the pieces on show, many of which belong to important cycles of work, demonstrate that these artists share a new conception of art in which the figurative is definitively abandoned and forms are devoid of any ornament – an art that eschews normal aesthetic canons, instead seeking a deeper and more mysterious structure and purpose.
Each of the gallery’s rooms will be dedicated to the work of one of the three artists who, in some cases, have chosen to create works in situ.

Giovanni Anselmo (Borgofranco d’Ivrea, Italy, 1934)
In 1965 Anselmo definitively abandoned painting, immediately becoming one of the leading exponents of the Arte Povera movement. Since 1980 his research has focused on the theme of the infinite. His works are the result of the interaction between materials that are very different in nature, origin and composition. The selection of component elements – often incompatible and contrasting – begets unexpected juxtapositions, underlining the intrinsic vitality of the artist’s chosen instruments: the result is an unremitting tension that generates what the artist himself defines as the “physicalisation of energy”.
His austere vision of the world scrutinizes all its aspects: space, time and movement, constantly exploring the concepts of finite and infinite, visible and invisible, detail and whole – the absolutes that form the foundation for his entire poetics. The complete detachment from figurative representation manifests itself in looming presences: stone and granite masses with which Anselmo probes the dimension of weight, energy and gravity. These are often flanked by his Oltremare [‘ultramarine’, but also ‘overseas’]: a physical representation of the idea of elsewhere or beyond; a place beyond the sea’s horizon; a distant land from which, in times past, the blue mineral was imported into Europe and transformed into pigment. The blue gash in the wall lays bare the constant desire to explore undiscoverable places, finally establishing the ever-longed-for connection between the heavens and the earth.
In another of the works on show, the ends of a cable grip two blocks of granite, held in a noose and straddling a stretcher-mounted canvas leaning against a wall. The use of the canvas on which Anselmo decides to arrange the heavy boulders underlines the artist’s distance from traditional painting, its most classical of supports being put to a use that is pragmatic in feel and decidedly humble. As though freed of their own weight, the blocks appear to be colours hovering above the canvas, challenging the very laws of gravity. Every one of the work’s elements ends up revealing the fundamental dialectic between the detail and the whole.

In 1990 Giovanni Anselmo was awarded the Leone d’Oro for painting at the Venice Biennale. His works can be seen in museums worldwide, including: the Hirshhorn Museum and Sculpture Garden in Washington, the Museum of Modern Art, New York, The San Francisco Museum of Modern Art, the Stedelijk Museum, Amsterdam, the Beaubourg in Paris, the Tate in London and the Australian National Gallery in Canberra.

Lothar Baumgarten (Rheinsberg, Germany, 1944)
Baumgarten is a German conceptual artist who divides his time between Germany and the United States. Since the 1970s his research has focused on the passing of time and its influence on the natural world, human knowledge, the economy and power.
His particular interest in the Americas and their indigenous peoples manifests itself in a diversified artistic practice that includes site-specific works, sculpture, text, photography and film.
From 1978 to 1980 he spent approximately 18 months living with the indigenous Yanomami community in Venezuela, recording their efforts to face present-day challenges and the radical changes already experienced. The rigorous anthropological research that Baumgarten undertook among the members of this primitive community permitted an in-depth investigation of the all-too-often interconnected themes of history and violence, and of the natural environment and the dramatic transformations to which it is repeatedly and cyclically subjected. From the perennial conflict between culture and nature the artist distils works in which language and the works’ very titles become cardinal elements: as he himself has declared, “To name is the most basic form of power”.
The works on show at Vistamare illustrate the great variety of media utilised by the artist: from the black and white photographs taken in the late 1970s during his time with the indigenous community in what, in a later letter, he would identify as the land of El Dorado, to the written texts which, like garlands fluttering on the walls, name the various species of birds native to South America, or the large sculpture entitled [Arché]_(Ark), 1969-2016, formed of branches and the feathers used by Native American Indians. The works all contribute to creating a space that is both contemplative and reverential.

Haim Steinbach (Rehovot, Israel, 1944)
In 1957 at the age of 13, Steinbach left Israel for New York. By the 1980’s he became a leading exponent of an art practice based on the diversification, presentation and display of objects. In display, the wall, the shelf and the object are activated as reflexive indicators of everyday social, cultural and political life. Everyday objects are taken as they are and presented as such. Steinbach’s objects range from the natural to the ordinary, the artistic to the ethnographic, giving form to artworks that attest to their identity and inherent meanings. Exposing the cultural and ritualistic aspects of object relations and their context, Steinbach has redefined the status of the object in art. His practice underscores the ontological aspect of things and has been associated with the recent philosophy of Object Oriented Ontology.
At Vistamare, Steinbach introduces two wall paintings based on Gabriele D’Annunzio’s “The Triumph of Death,” (a) alone, the red sails, as superb as if they were of purple, broke the diffused light, and (b) a mist, slightly tinted with violet, paled the distant coasts. He focuses on the mutability of meanings in the object, as it pertains to color, text and architecture. An object is architecture, it occupies space like the interior or exterior of a volume. A wall is architecture. The painted wall duplicates the wall. The borrowed text bumps into a borrowed colour. Along with the wall paintings, Steinbach exhibits two box works, Untitled (Pantone 877) and Untitled (Pantone 672C). These works incorporate tin boxes that are color codified by the color standardization company Pantone.