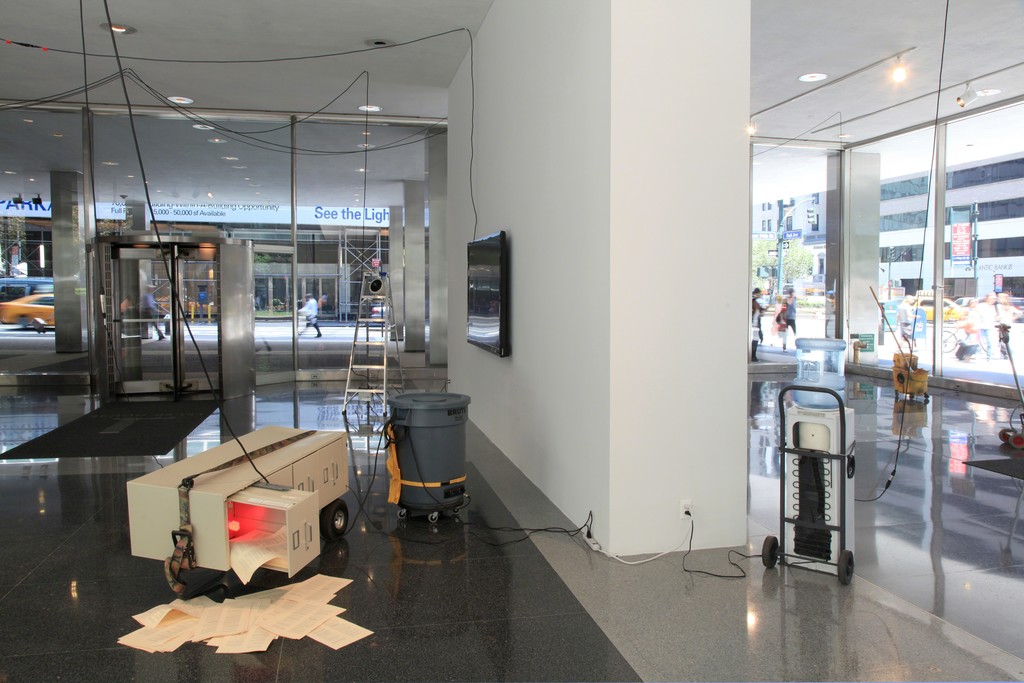 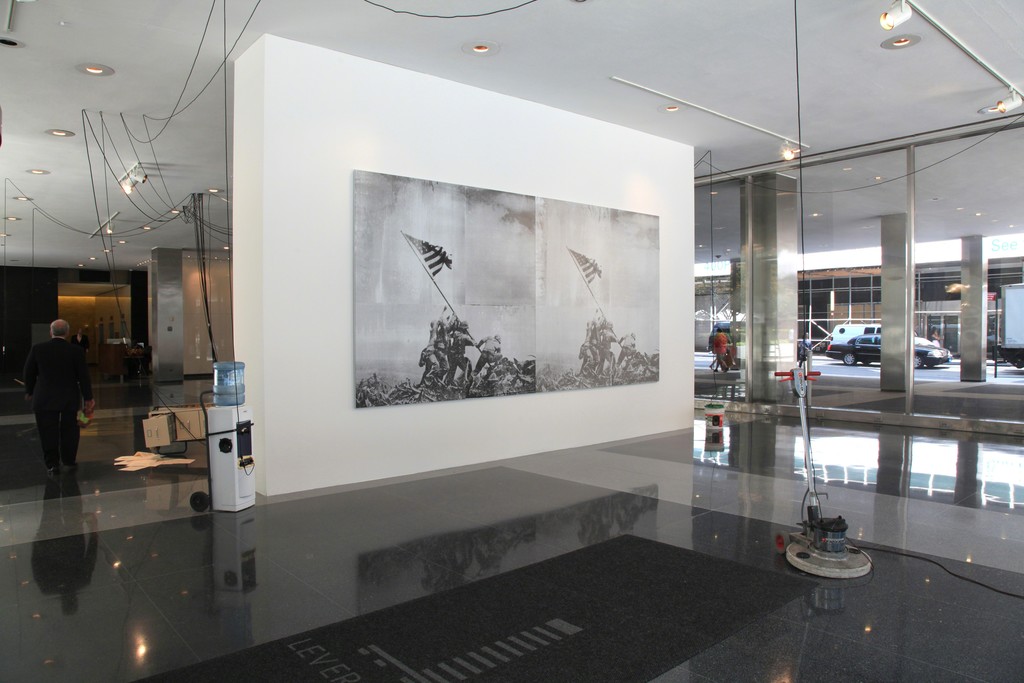 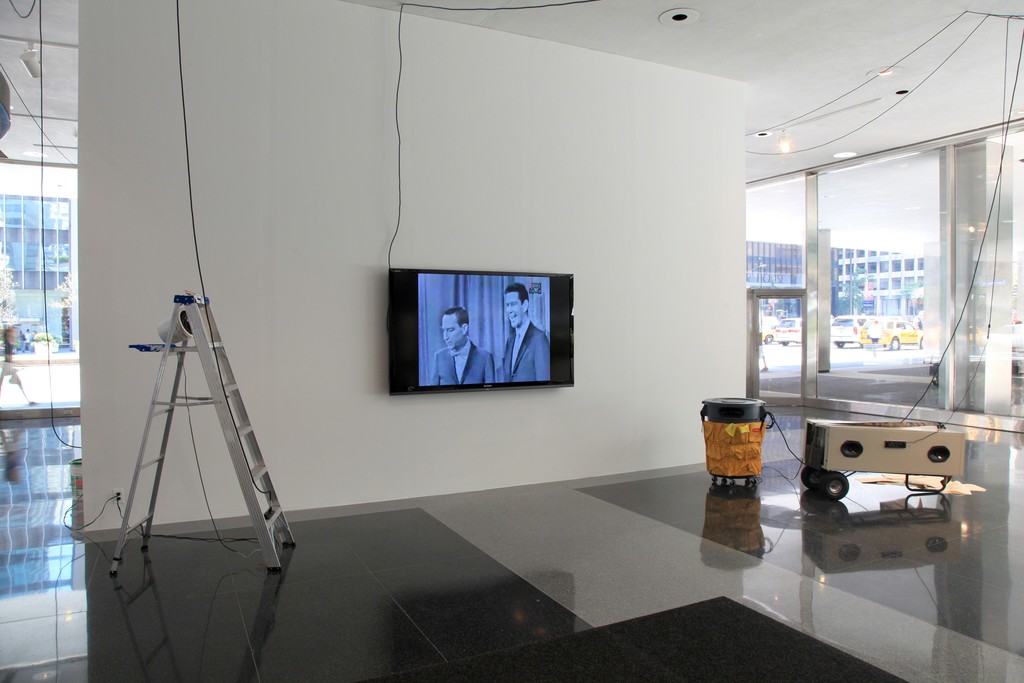 ART HISTORY WITH LABOR is a context-specific exhibition comprised of three new works. THE NEW COLOSSUS is a monumental twelve-foot high cast-bronze ‘union rat,’ an inflatable icon of American labor unions to protest the use of ‘scab’ labor. It has been in frequent use since the early 1990s, often on Park Avenue, but the artists have undermined the political content by solidifying a plastic animal in bronze and by declaring it to be fine art. The title refers to an 1883 poem written by Emma Lazarus that is emblazoned on a plaque at the Statue of Liberty: “… give me you tired, your poor, your huddled masses yearning to breathe free…”

DOUBLE IWO JIMA is a two-panel painting that depicts the world famous image of the raising of the American flag on Mt. Suribachi during the victory battle for Iwo Jima in 1945. The photograph, taken by Joe Rosenthal, was extremely popular, reproduced in thousands of publications and became the only photo to win the Pulitzer Prize for Photography in the same year as its publication. It was also issued as a United States postage stamp in 1945 and 1995, used to sculpt the Marine Corp War Memorial in Washington D.C., and struck by the U.S. Mint on a commemorative silver dollar in 2005. However, it seems that there were actually two raisings of the flag on Iwo Jima. The first flag was attached to a pipe, raised, and photographed, but it was then deemed too small to be easily seen from the nearby landing beaches. So a second, larger flag raising was staged shortly after to photographically re-document this historic event with a grander symbol. Accordingly, the artists have presented two images of the photograph, perhaps to acknowledge historical inaccuracies and to recognize the physical labor required to chronicle the occasion. The artists have also manipulated the image, as it was originally in 1943, by separating the photo into four distinct silkscreens and reassembling them on the square canvas. Their use of silkscreens and multiple canvases make respectful reference to Andy Warhol’s technique and also alludes to the production-line labor used in his “Factory” to complete numerous silkscreen paintings.

ART HISTORY WITH LABOR: 95 THESES and ART HISTORY WITH LABOR: 95 THESES (PORTABLE MUSEUMS) are two interrelated works that present a visual and oral history of labor and art. A video is screened and the soundtrack is simultaneously wired by radios to numerous utilitarian objects, such as a file cabinet, mop and bucket, briefcase, wheelbarrow, trashcan, and ladder that are scattered throughout the space as if left behind by accident. These emblems of labor become sculptural “portable museums” and emit a soundtrack of ninety-five different labor-related texts selected by the artists and read by professional actors. The video, text, and quotes deconstruct the history of art’s relationship to labor and artists’ affinities and differences with labor movements. The title of the work refers to Martin Luther’s “Ninety-Five Theses on the Power and Efficacy of Indulgences” which he nailed to a church door in Wittenberg, Germany, in 1517, and which led to the Protestant Reformation and subsequent evolution of the work ethic, which expounds that hard work is intrinsically virtuous and worthy of reward.

The Bruce High Quality Foundation is an arts collective formed in 2004 and based in Brooklyn, New York. They have exhibited in the 2010 Whitney Museum Biennial Exhibition; “The Retrospective: 2010” at Galerie Bruno Bischofberger, Zurich; “Argumenta” at the 2011 Venice Biennale, Italy; and have organized two “Brucennial” exhibitions in Manhattan in 2010 and 2012 as a counterpart to the Whitney Museum’s biennials. In 2009, the group established the unaccredited art school, The Bruce High Quality Foundation University in downtown Manhattan.