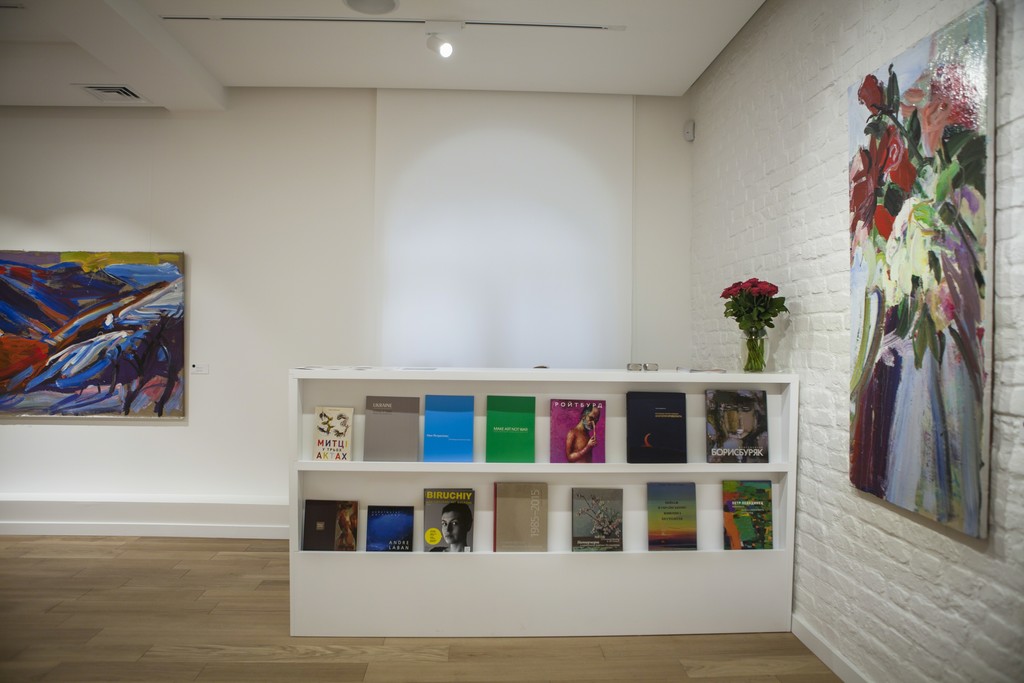 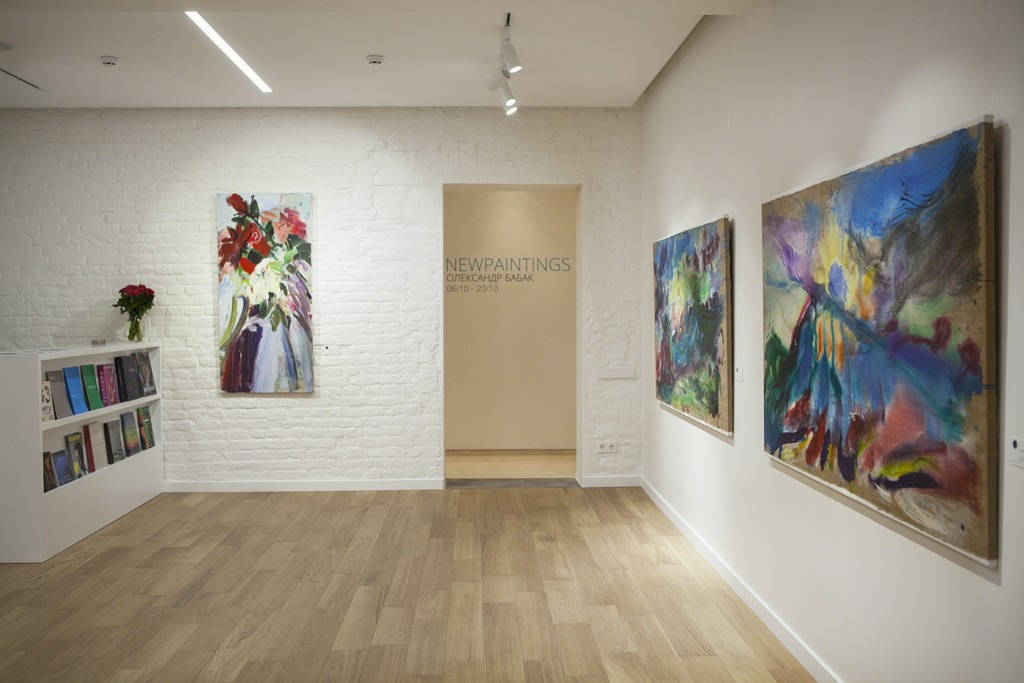 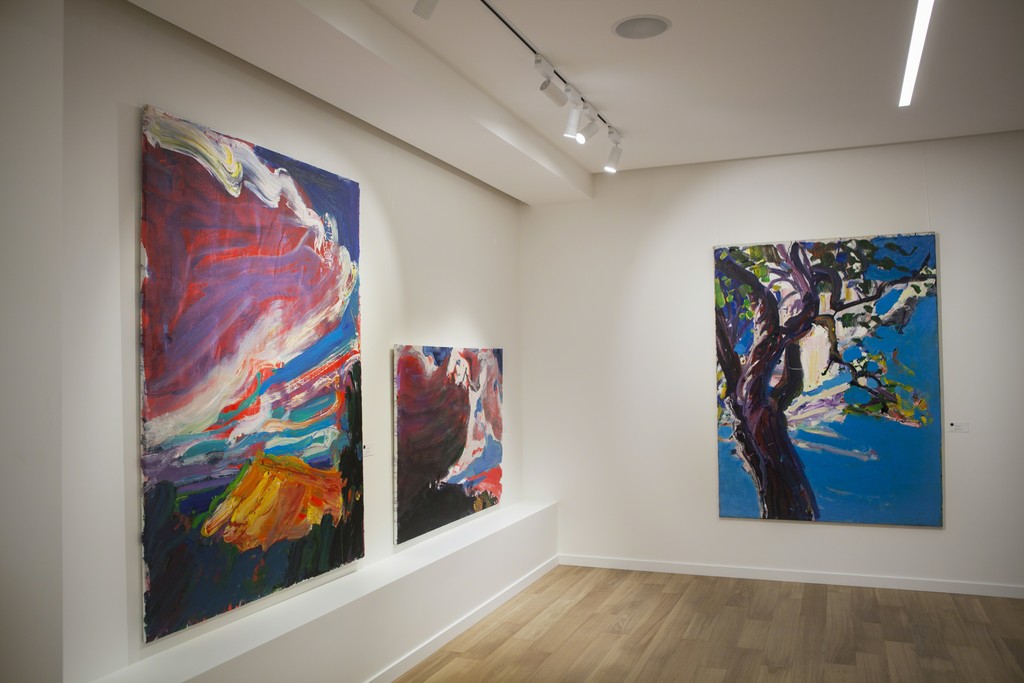 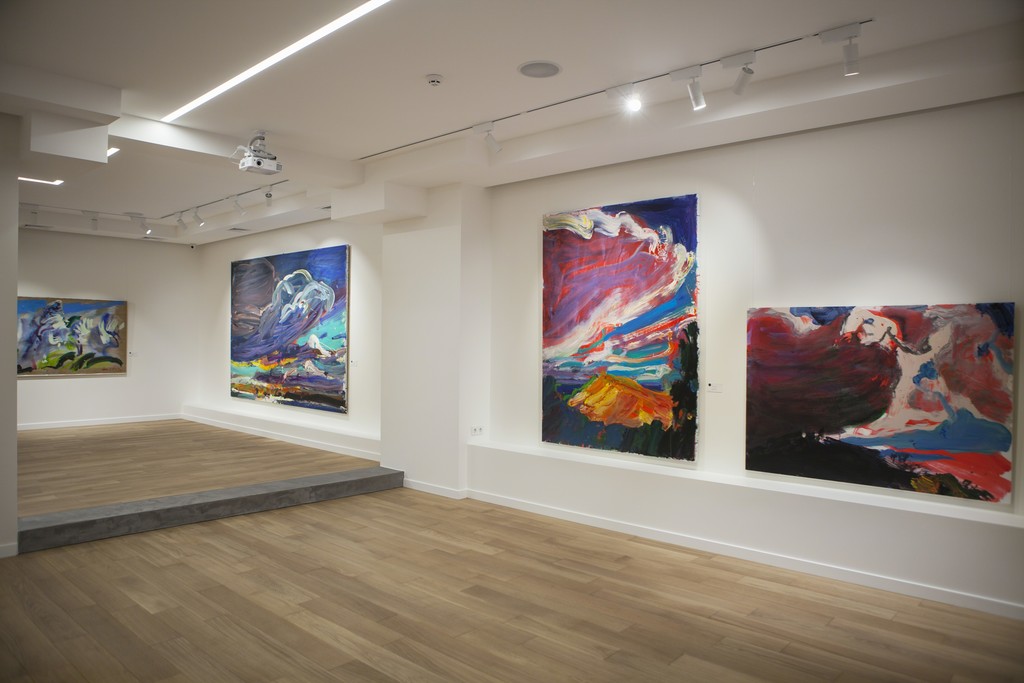 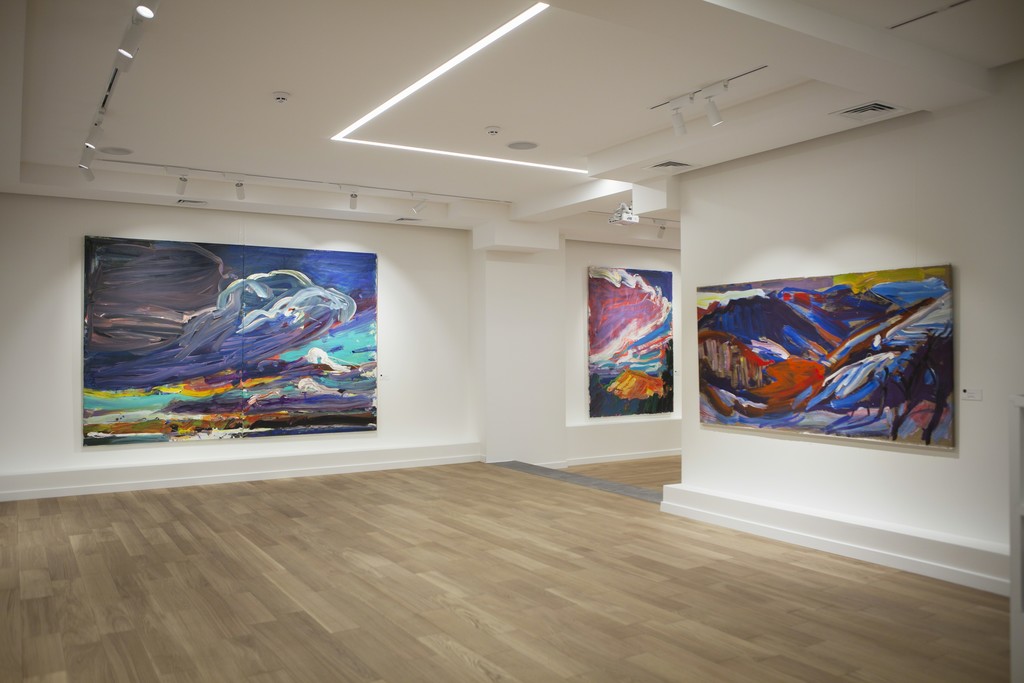 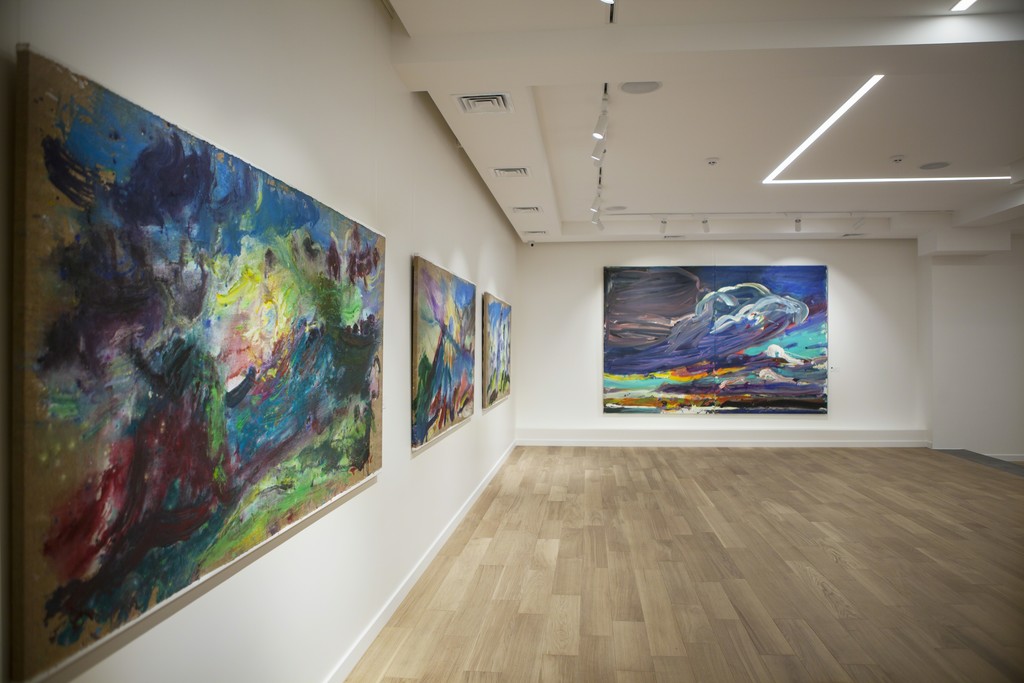 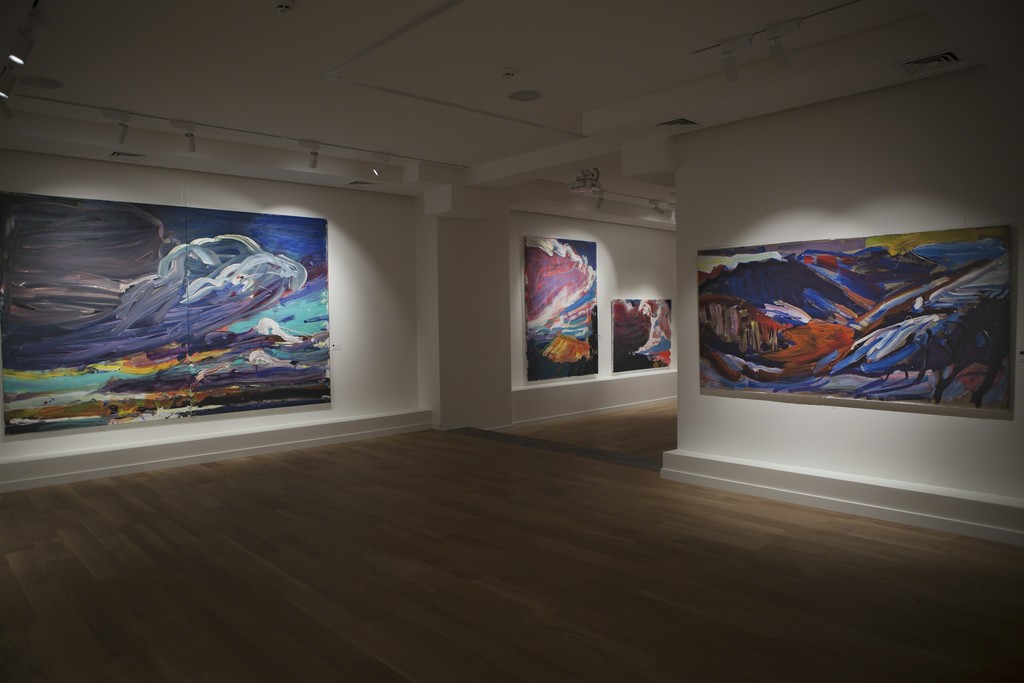 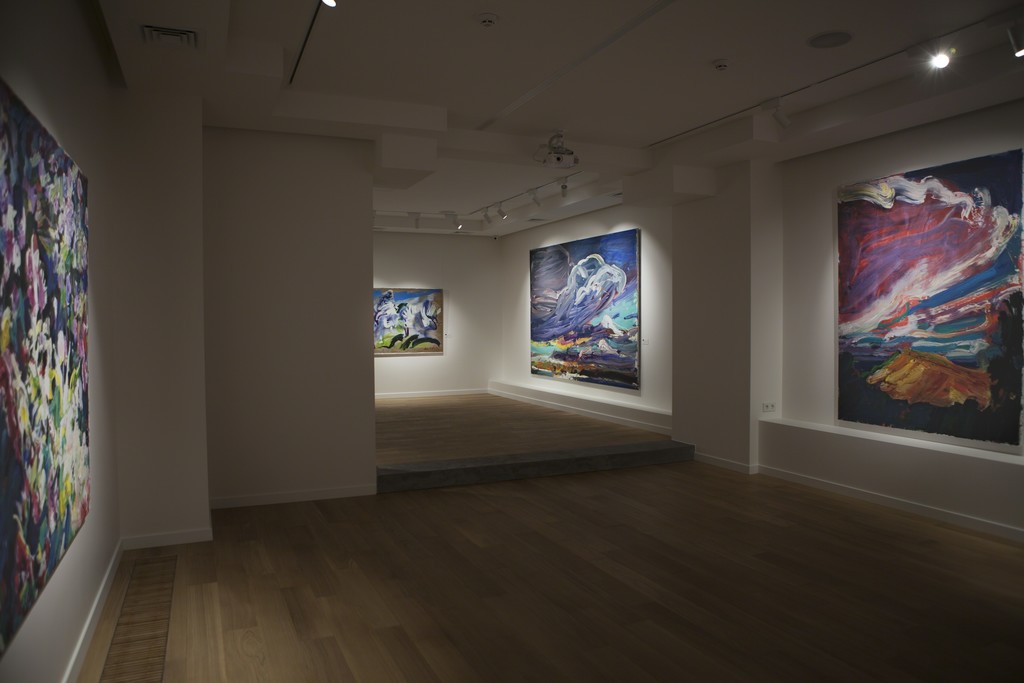 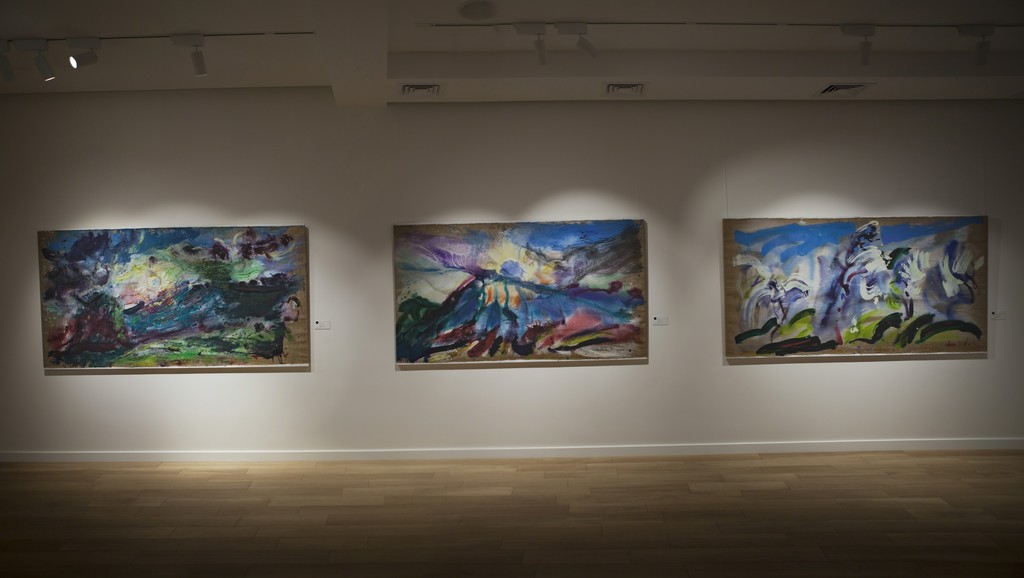 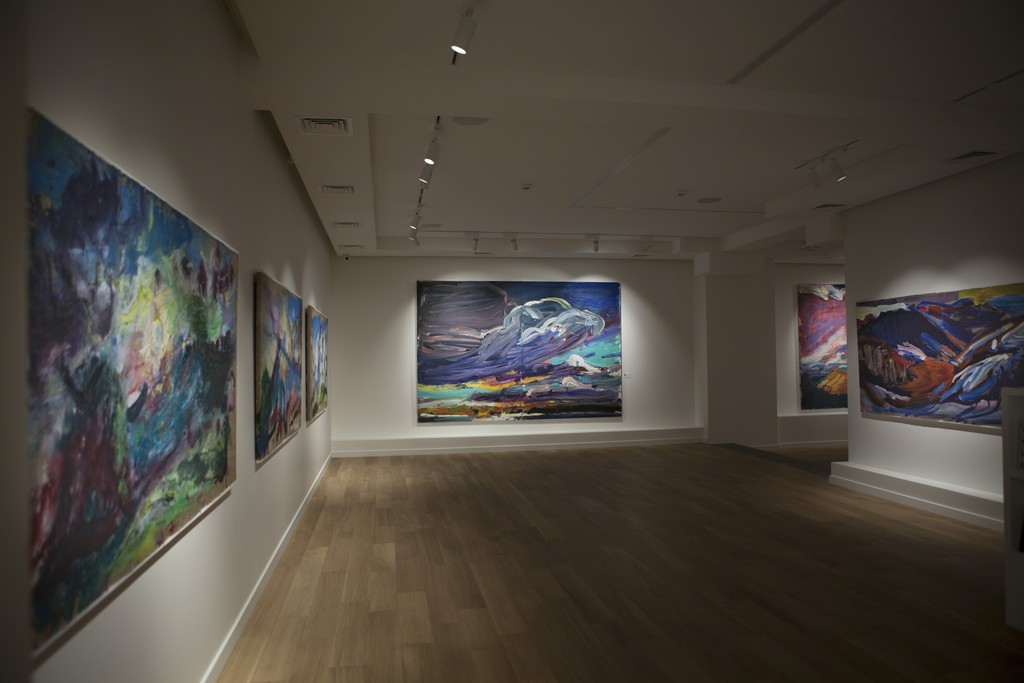 Landscape series presented at the exhibition were painted in the style of expressive paintings – artist’s heritage for 2016. Some of the works were painted in the Transcarpathian region this winter, and the bulk of the work was created in Velykyy Pereviz where in the late 80's the artist Oleksandr Babak settled. The area where the village is located fascinates many famous artists for the second century. Among those who found inspiration here: artists brothers Fedir and Vasil Krichevsky, Petro Kostyrko, Petro Babak, Vadim Odaynyk, Valentina Vyrodova-Gauthier, Michaylo Weinstein and others. The world famous Ukrainian director Alexander Dovzhenko shot here "Zvenyhora" and "Earth".
The leading feature of the paintings is that nature is extremely easy and directly, at some almost canvases it’s abstract. The artist deliberately uses language generalizations and understatement, giving the viewer a space for imagination. Looking at the works of Oleksander Babak not only contemplate them in detail but feel powerful jets of energy, consisting of various images of landscapes. Here every brush stroke accurately conveys the artist's delight of nature and you spontaneously begin to feel the same. In some places through the paint we see the canvas, the artist not accidentally chooses this basis - not grounded linen glued surface that serves as a middle tone. That is, added colors lighter and darker the tones, and background environment is certain that gathers all together. This effect adds materiality of paint; sometimes they fall very heavily and spread in shimmering fascinating view. For example, the painting "Velykyy Pereviz. Spring" impresses with its lightness and freshness, with a glance in concise smears we guess flowering gardens of a spring sunny day. And on canvas "Sunrise" we see a complex color combination - it's just a flood of emotions that doesn’t leave any observer indifferent.
"... Already in the first pictures of Oleksandr Babak, which appeared in exhibitions since the mid-1980s, main plot motifs were identified that were cross for his paintings - Ukrainian landscape transformed by fantasy author and fantastic landscapes, saturated deep historical and symbolic meaning, expressive visions where impressions of nature are dissolved in a bright, busy rolling colours, and next to it - isolated female characters and the kind of "still life" in which the materiality of the subject is revealed through physicality of painting, paint , real and notional time. Later, from the end of 1980-1990 the painting in his work receded into the background, giving way to installations, objects and a large art events that have become a significant phenomenon of Ukrainian contemporary art, bringing it to world space peasant culture, seen by the artist in the light of the "new archeology" of the late twentieth century. And here again - a return to painting "- as noted art critic Galina Sklyarenko.
Oleksandr Babak was born in Kyiv, lives and works in Kyiv and Velykyy Pereviz in Poltava. In 1975 he graduated from the Republican School of Art named after T. Shevchenko, 1984 - Kyiv State Art Institute (now - National Academy of Fine Arts and Architecture). Since 1988 - Member of the National Union of Artists of Ukraine. He became a member of the Kyiv creative group "Picturesque park" created by Tiberiy Silvashi in 1992.. In 2010 on the territory of the estates of spouses Olexandr and Tamara Babak together with Yuri Oslamovskyy initiated the artistic residence, known as Velykyy Pereviz. For 6 years, this art project was attended by many famous artists.
Voloshyn Gallery was founded in 2006 by spouses Max and Julia Voloshyn called Mystetska Zbirka Art Gallery. It is located in the cultural and historical center of Kyiv on the street Tereschenkivska. Voloshyn Gallery - gallery of modern and conceptual art, is a platform for artistic experimentation, research and social projects.
The mission of gallery: popularization of Ukrainian art in Ukraine and abroad. Max and Julia Voloshyn actively represent Ukrainian art abroad, facilitating its integration into European cultural processes. In February 2014 Maxim and Julia presented the project "Ukraine. The archetype of freedom" in Vienna in cultural and exhibition center Novomatic Forum. There were shown the works of 15 Ukrainian artists who embodied in in their works the principle of freedom. In April 2015 at the initiative of the gallery the first Ukrainian art tour to the island of Cyprus called MAKE ART NOT WAR was organized. The project was attended by seven leading artists who presented their views on war and peace in Ukraine and in particular the historical context of the whole. In 2015, Max and Julia organized the project of Ukrainian artists in New York, which took place in the Ukrainian Institute of America. In June 2016 Ukrainian gallery represented the artists at SCOPE Basel; the most prestigious art fair Art Basel in the world.
Max and Julia Voloshyn actively support contemporary young Ukrainian artists and collect their works. In 2015, Max and Julia entered the top 30 Ukrainian collectors according to Forbes and became the youngest in this ranking. In the same year, Max and Julia came in a rating of Ukrainian Forbes: 30 successful Ukrainian, who are younger than 30.