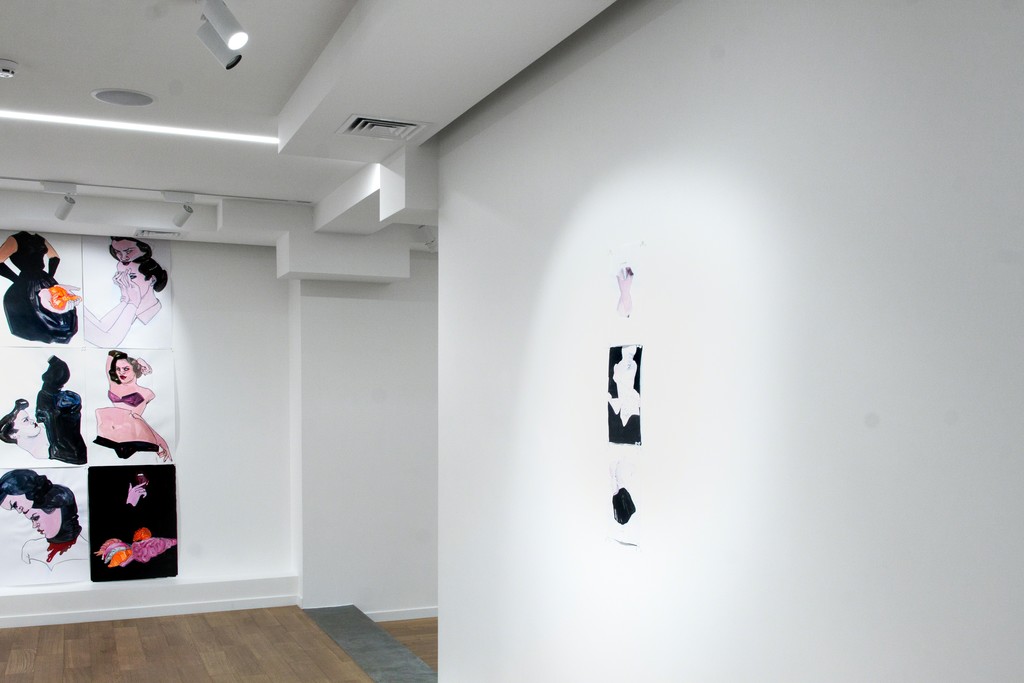 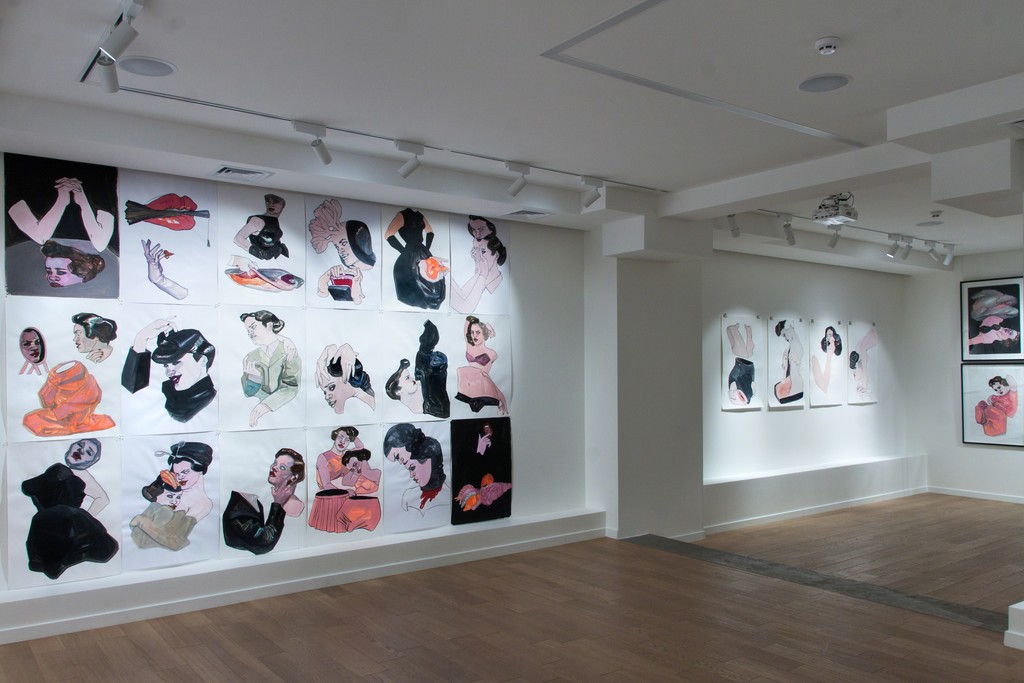 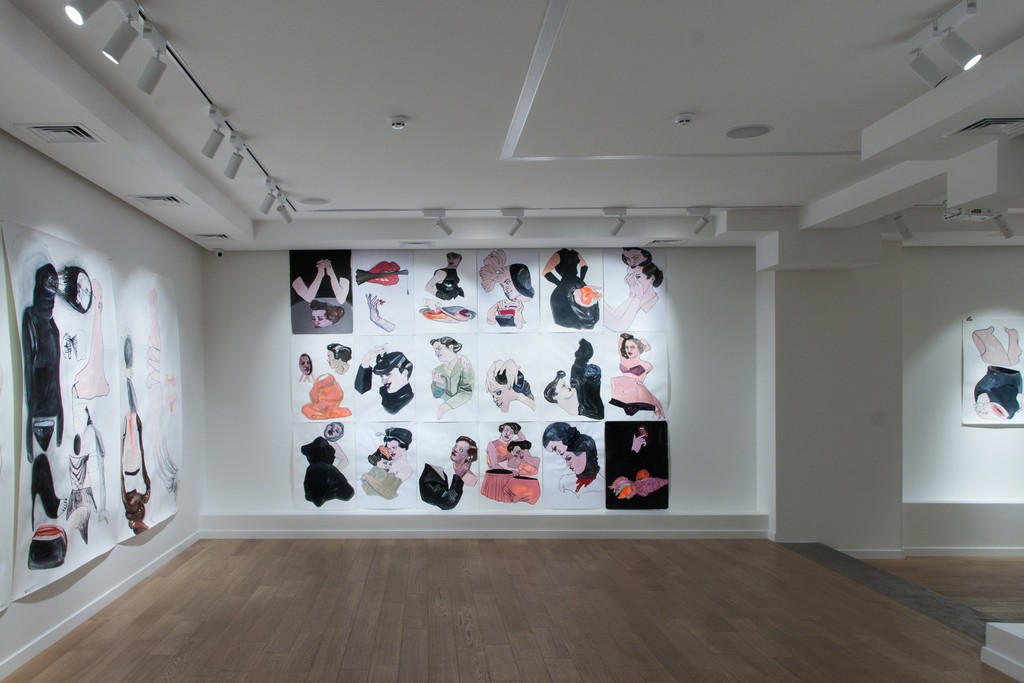 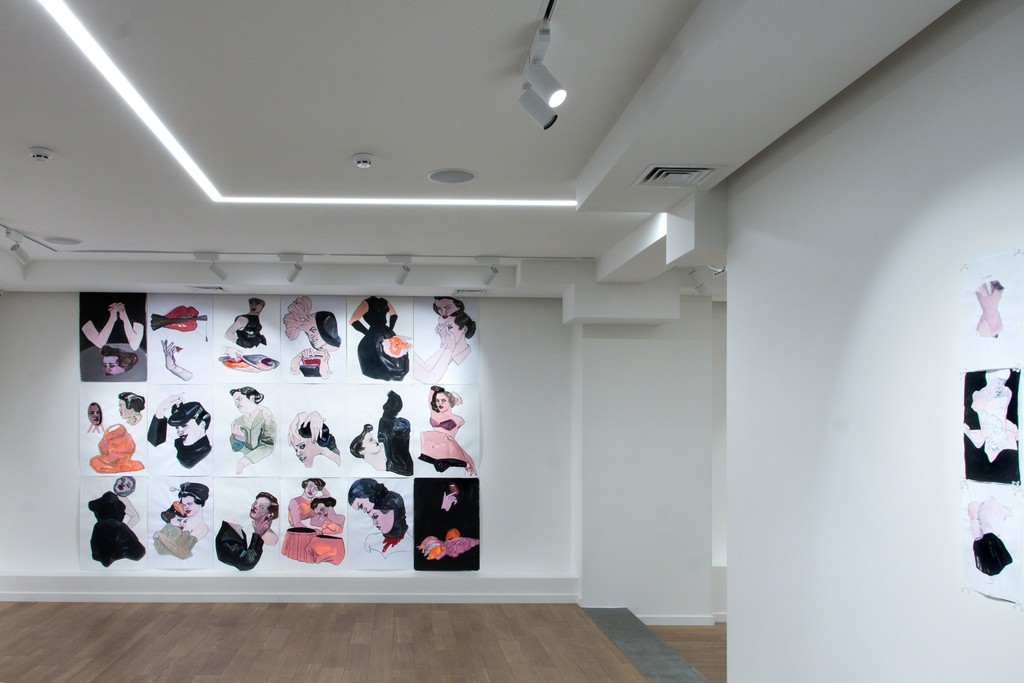 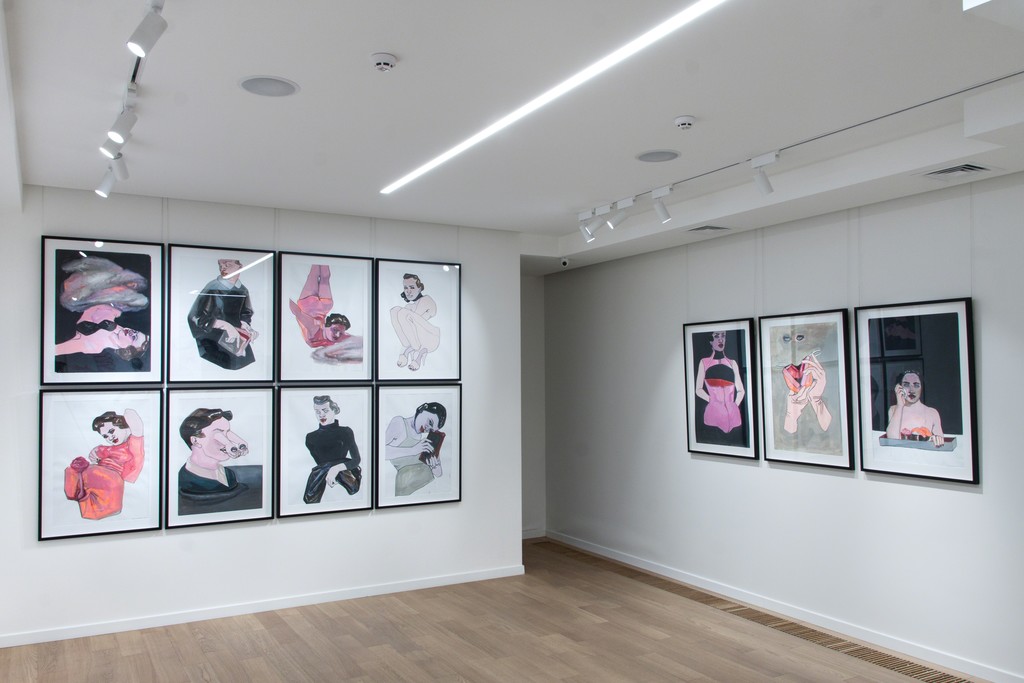 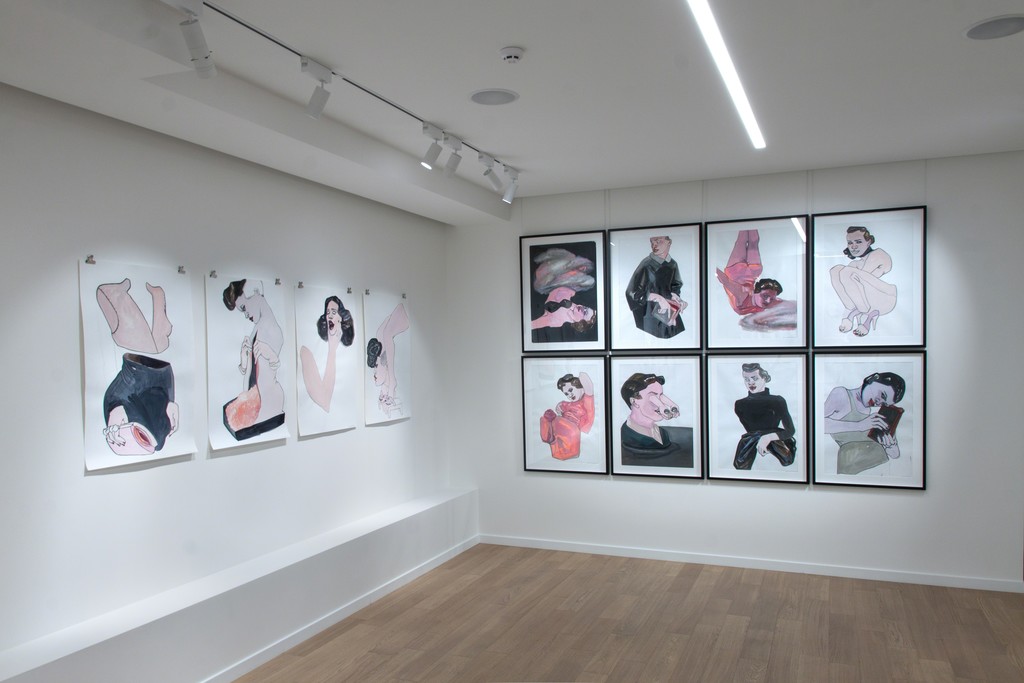 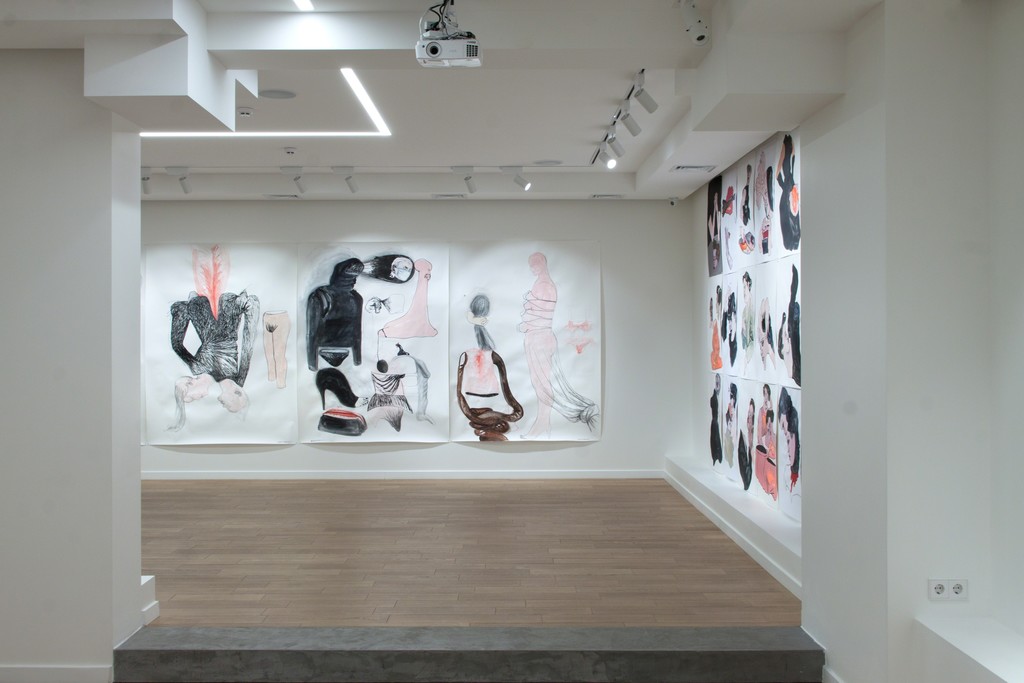 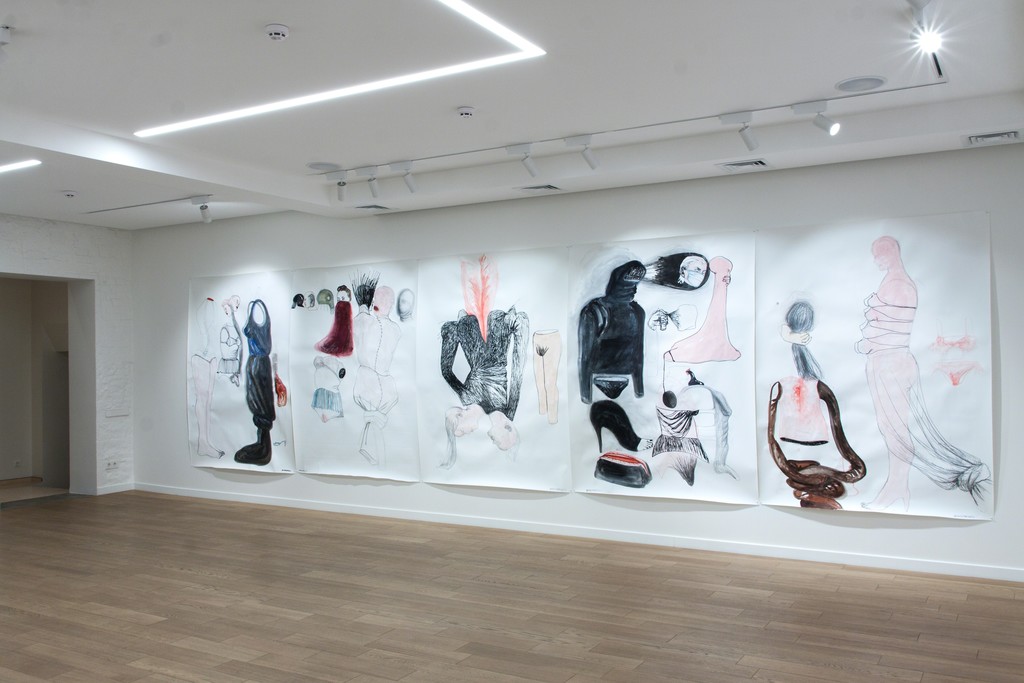 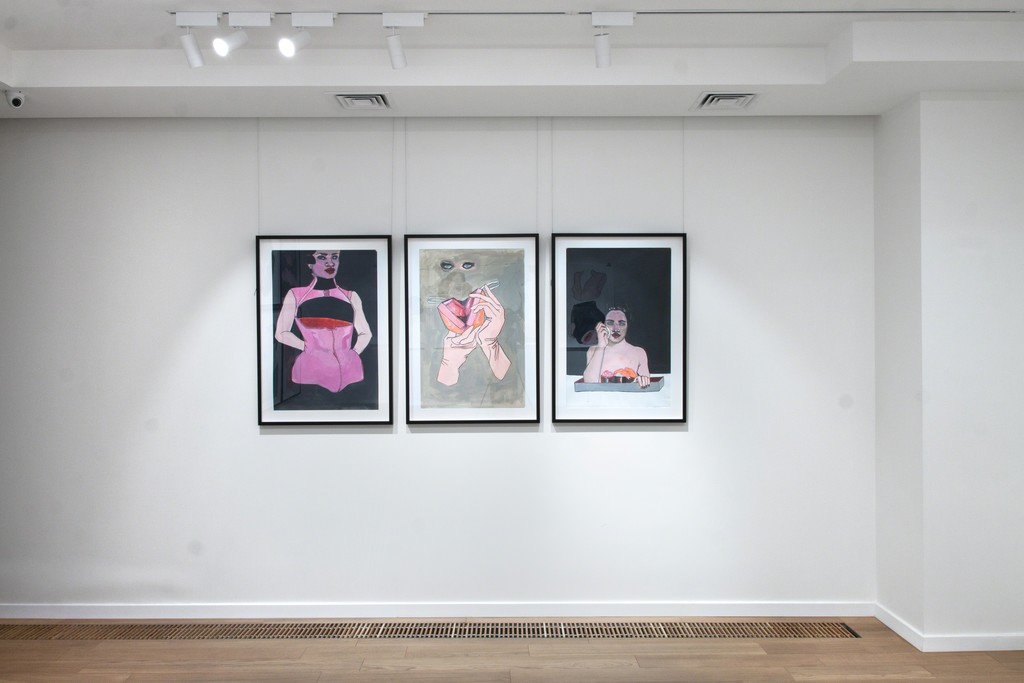 Voloshyn Gallery is proud to present Fashion Show, a series of graphic works by Vlada Ralko, the most prominent expressionist artist in contemporary Ukraine.

In her works, Ralko often raises the issue of identity in relevant social and political contexts. The Fashion Show series is no exception. Most of us have pondered the impact fashion has on our consciousness and the fabric of social life. Fashion also affects our perception and understanding of the notion of beauty. A look back at history demonstrates that canons of beauty have changed radically more than once. The changes used to occur every century or so, but now they happen every other year or even every season. No effort is spared in making human bodies, primarily female, to conform to the new ideals. In essence, bodies become ever more reminiscent of clothes, which a contemporary person can “change” at any moment. No less fascinating, and potentially even more profound, is the theme of “imitating culture,” which Ralko formulated in her characteristic cutting and sharp manner:

“Bodies traumatized by fashion. Or, more broadly, bodies traumatized by culture. (Imitative culture stitched together like Frankenstein’s creature can crush and eviscerate like a cold-blooded murderer.) And yet, my case study is based on fashion, which reproduces itself at accelerating breakneck speed. Fashion no longer cares for bodies: it is enchanted with itself, and is dying the death of Narcissus. Before now, sophisticated clothing would add to bodies, lending them new volume and shape, or would rediscover bodies altogether, whereas now clothing decides the fate of bodies not in tandem with bodies as such, but with other items of clothing. Bodies are relegated to the role of a dead dummy occasionally fine-tuned, ostensibly to fit fashion’s demands, but in reality out of sheer boredom.
Bodies dismembered by clothing, or empty clothes as such, become a metaphor for the alienation of everything pertaining to culture from normal pressing human needs, such as hydrating or breathing. Everything human (simulated or dead) is alienated, that is, from everything that is alive yet purely biological.
Bodies encumbered with dead cultural legacy succumb and start to transform into items of clothing, or flee altogether. The disappearance of the ‘protagonist’ does not seem to affect simulated culture all that much, which becomes abundantly clear in ‘new collections.’”

The history of the Fashion Show series of graphic works is interesting too. In 2012, Vogue Ukraine invited Vlada Ralko to create a magazine cover under the aegis of its collaborative project with leading Ukrainian artists. The artist approached the commission with irony and startling ingenuity. Besides, the connection between fashion and human bodies proved so captivating to Ralko that she produced an independent series of drawings.

Vlada Ralko was born in 1969 in Kyiv. She graduated from the T.H. Shevchenko Republican Art School in 1987, and from the National Academy of Fine Arts and Architecture (the workshop of Professor V. Shatalin) in 1994. A member of the National Union of Artists of Ukraine since 1994, she is widely exhibited in Ukraine and abroad. Lives and works in Kyiv, Ukraine.