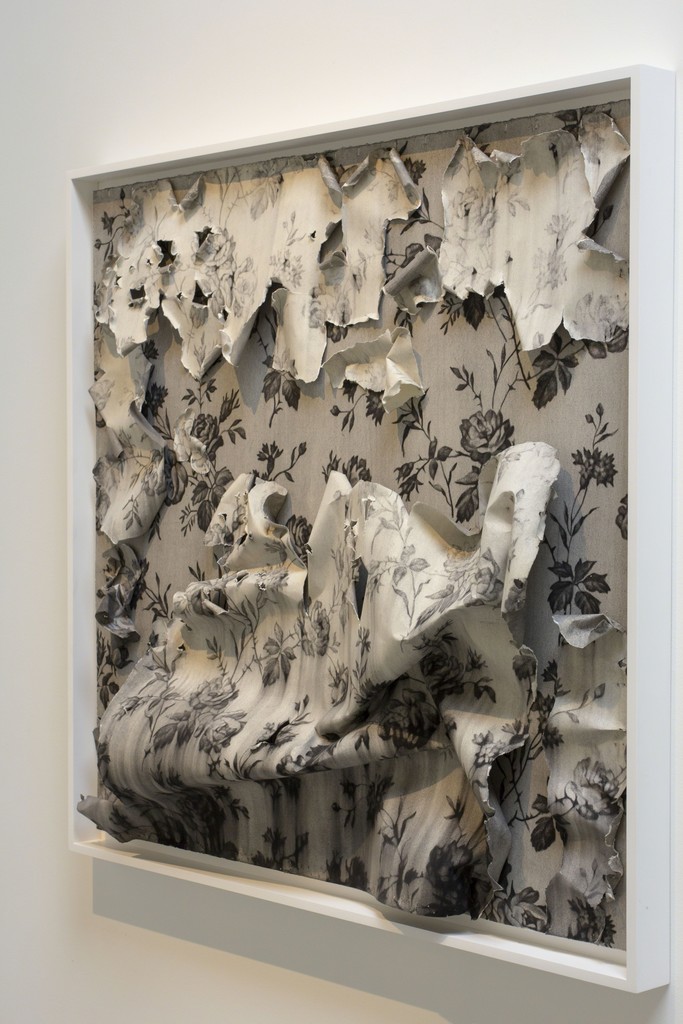 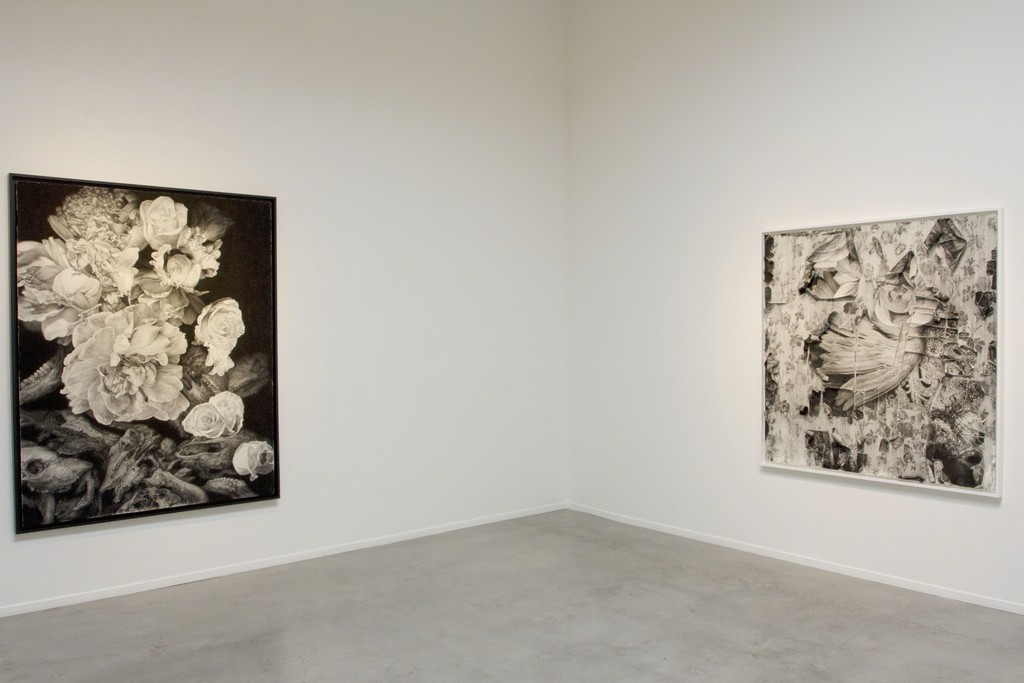 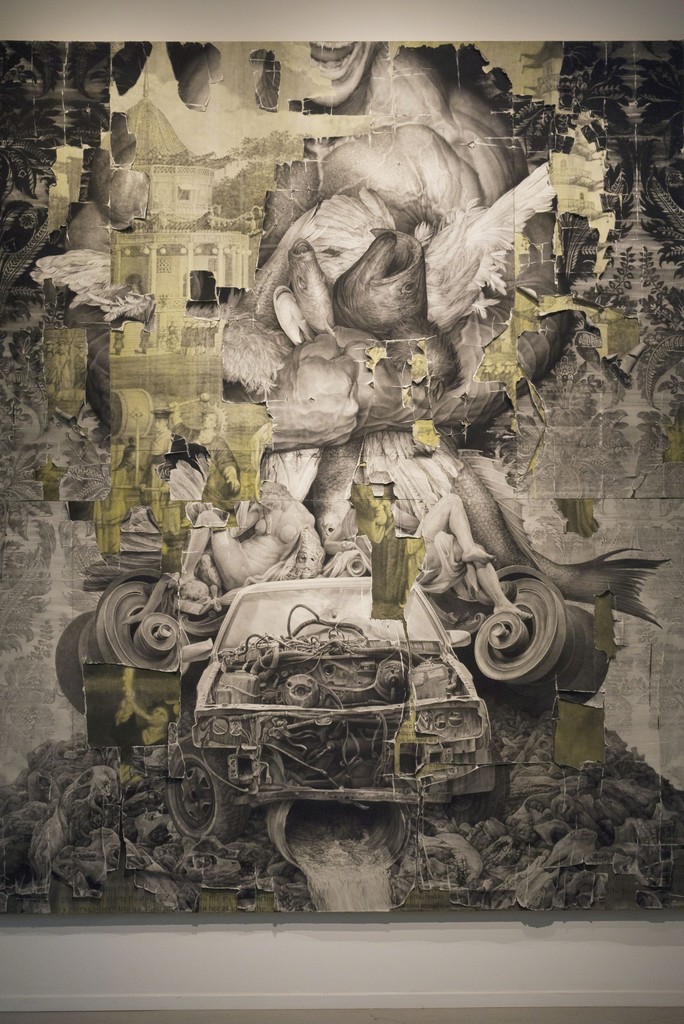 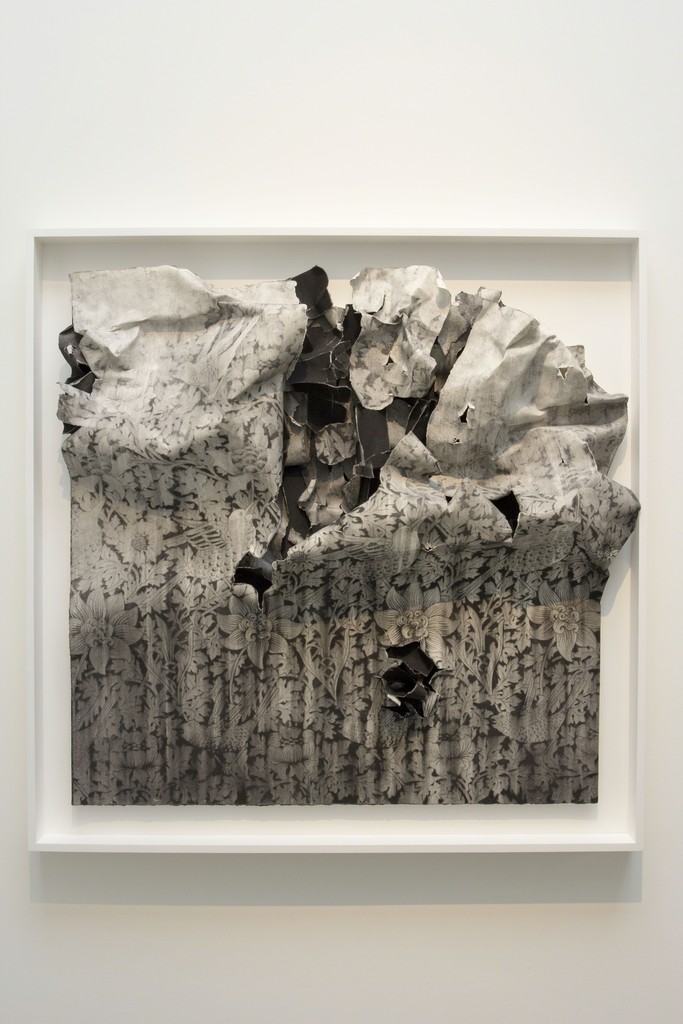 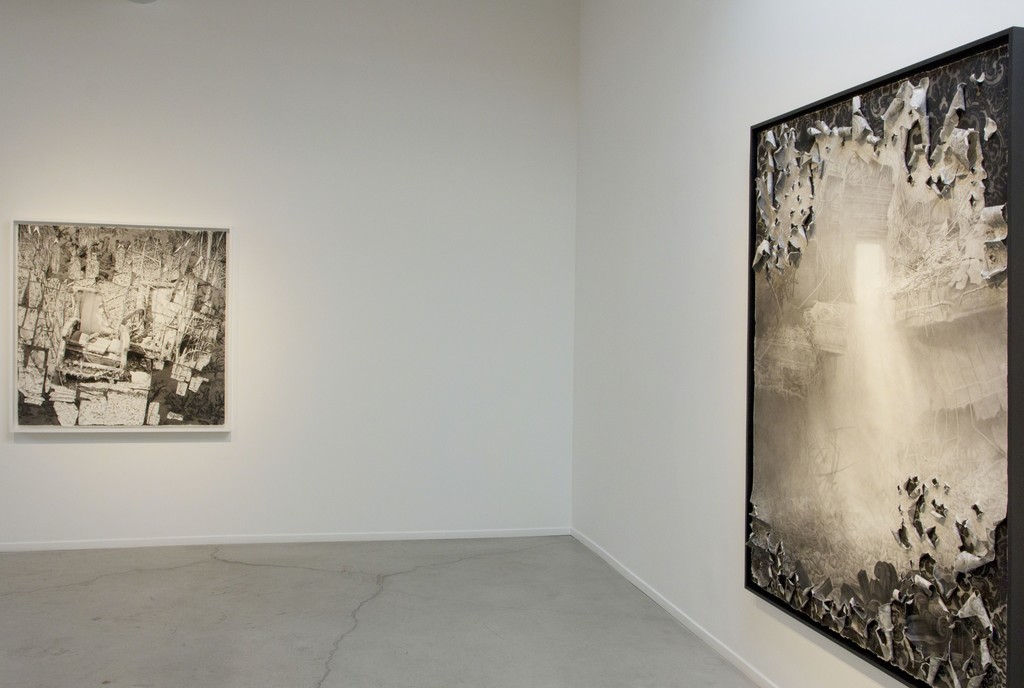 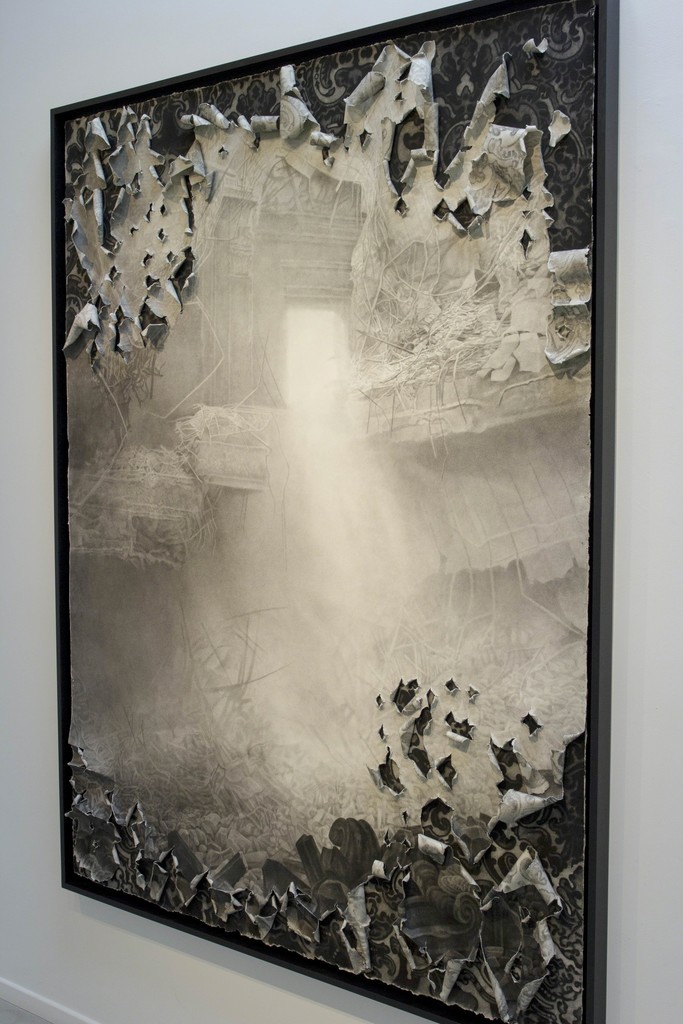 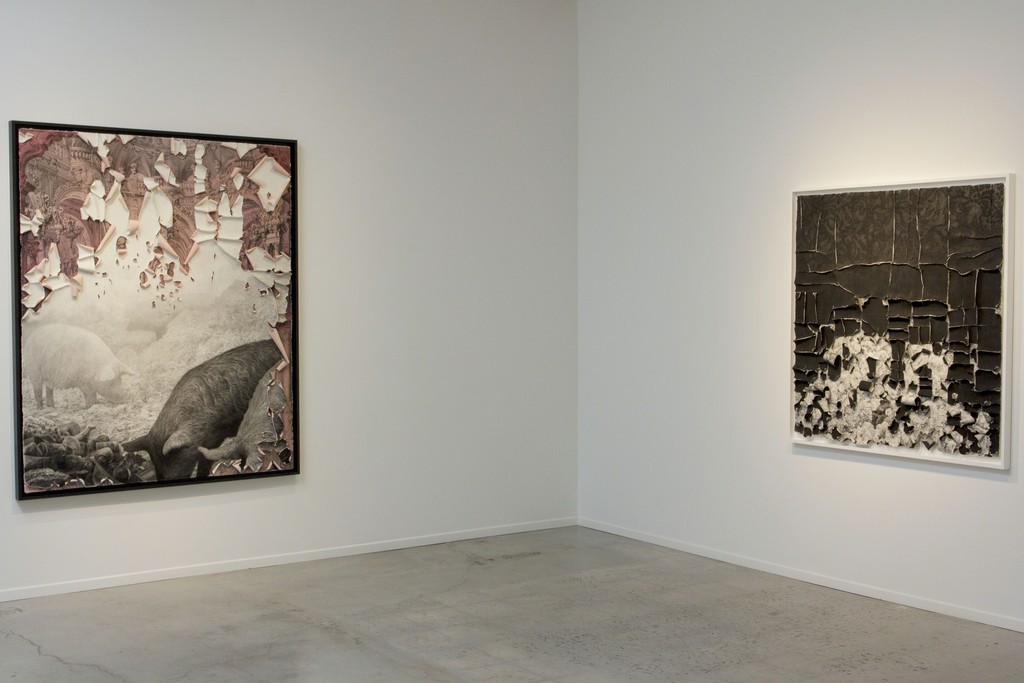 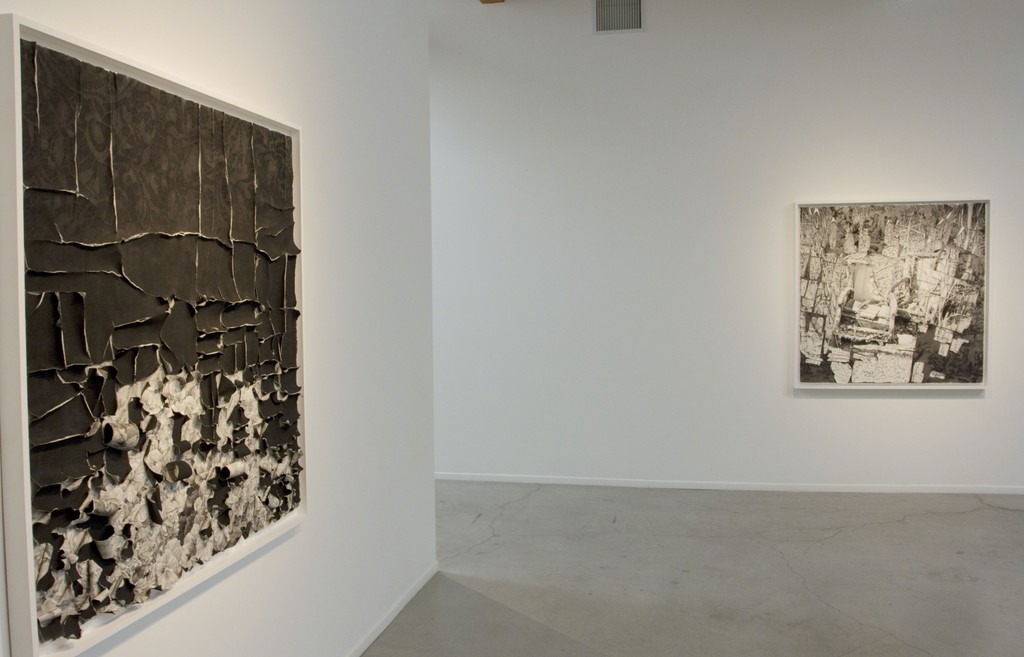 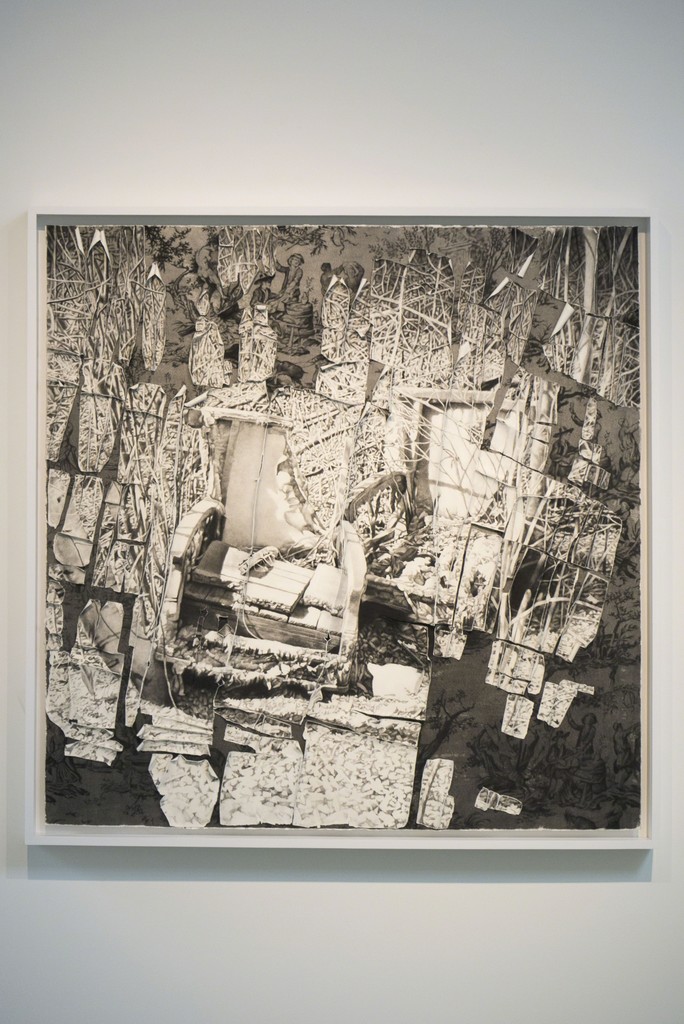 Joseph Stashkevetch is known for his realistic and richly textured drawings rendered in conté crayon on rag paper. In a striking expansion, the artist's new compositions frequently disturb the two-dimensional plane, challenging our acceptance of flat, three-dimensional imagery and engaging the paper as an active participant in the unfolding drama. The sculptural works collage multiple drawings, the roiled surfaces obscuring and exposing images in counterpoint.

In addition to using his own photographs and memories as source material, Stashkevetch notably appropriates wallpaper patterns of nature; referencing a fundamental need to connect to an environment from which we have become increasingly divorced. The mechanical repetition of artificial flora and fauna falls away in delicately exhausted folds to reveal some of the less savory aspects of industrialization and economic “growth.”
The monumental, ten-foot “All You Can Eat” is a literal pile-up of iconography referencing subjects Stashkevetch has previously explored. The scene is a totemic parade of western hubris and consumerism that cracks and peels to reveal an antique wallpaper panorama of China.

The primarily monochrome works blend the graphic precision of photography with the expression of marks that can only be made by hand. Working with large-format watercolor paper, Stashkevetch builds his images gradually, alternately washing, rubbing, sanding and scraping the paper. With a narrow set of tools—carbon, paper, water— Stashkevetch imbues his drawings with preoccupations of fragmented expectations and disappointment, the fragility of dreams and the irresistible consequences of a materialistic society.
“There is a distinct duality in the subjects he chooses to represent, shifting from natural forms to human-made forms both celebrated and discarded. ...They reveal a beautifully rich surface and evidence of the artist’s patient and meticulous hand, rewarding us in a way that realist work often does not when examined closely.”
—Deborah Rickman, Oxford University Press

Joseph Stashkevetch was born in 1958. Recent solo exhibitions include “Epic” at the Denver Art Museum in 2014. His work is included in numerous private and public collections including the Whitney Museum of American Art, New York; the San Francisco Museum of Modern Art; the Museum of Fine Arts, Houston; Dallas Museum of Art and the Denver Art Museum. He has been reviewed by Art in America, The New Yorker, The New York Times and the Los Angeles Times Magazine. Additionally, his work has frequently been featured in Architectural Digest and Elle Décor. The artist lives and works in New York City.

For additional information or visual material, please contact the gallery at (310) 559-5700 or by email at [email protected].