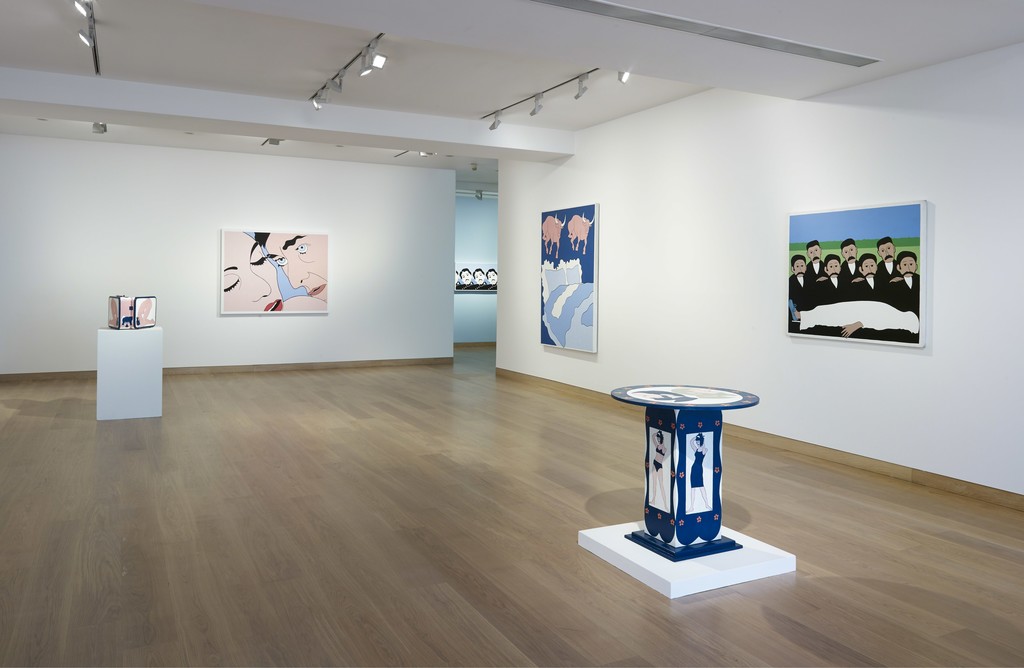 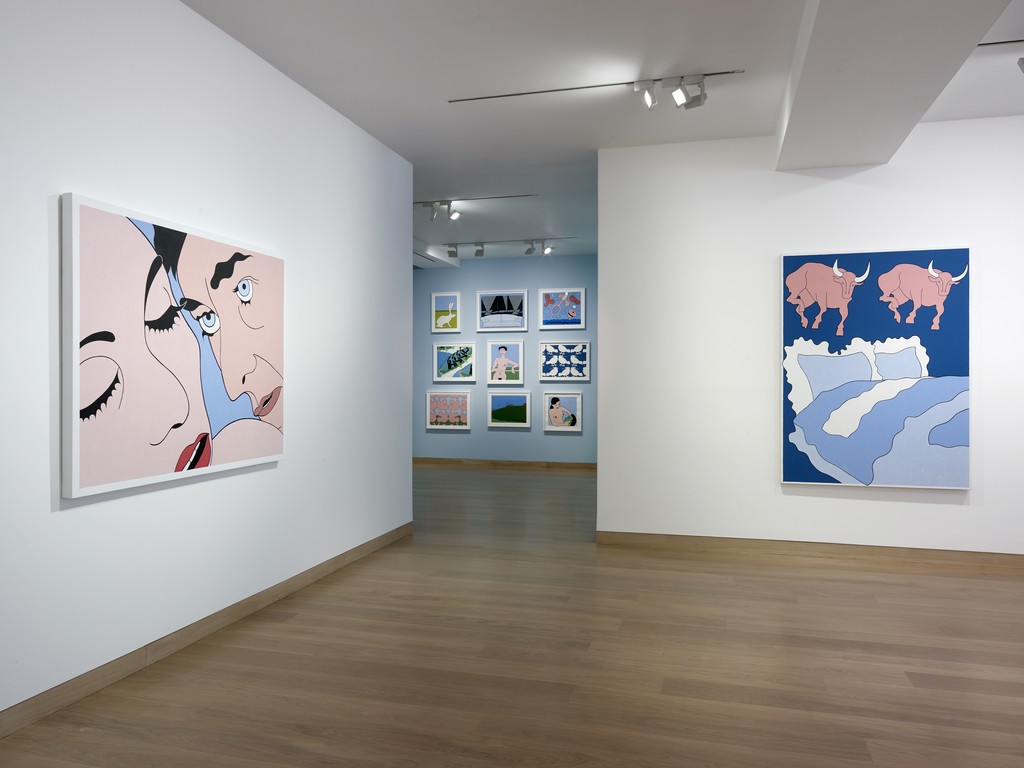 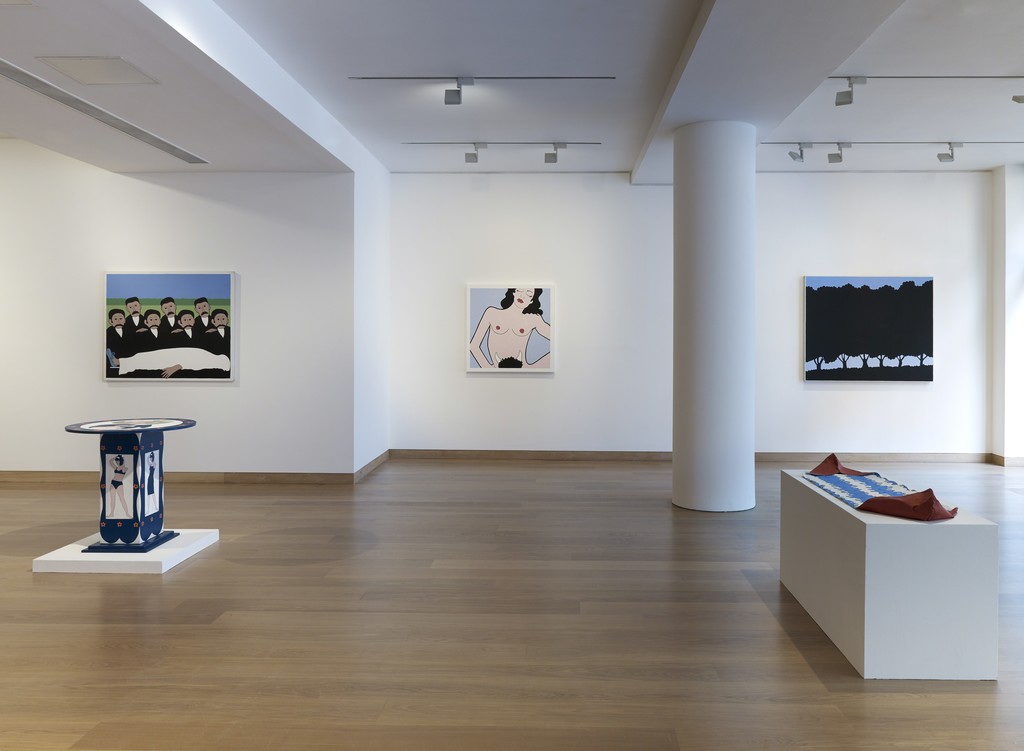 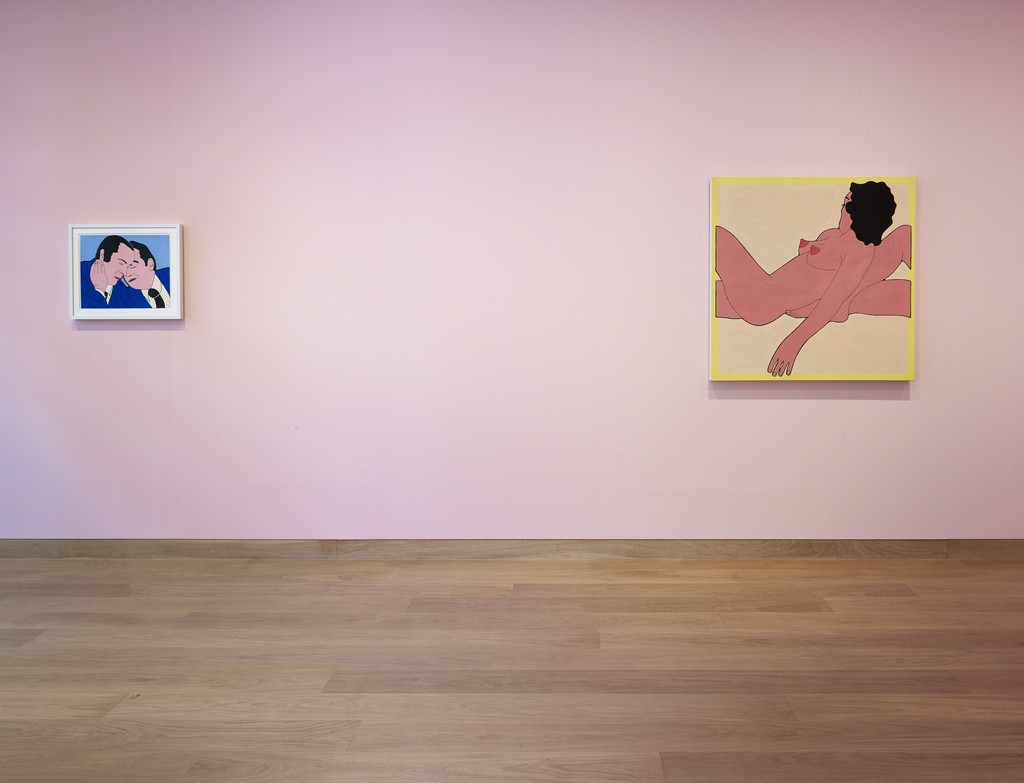 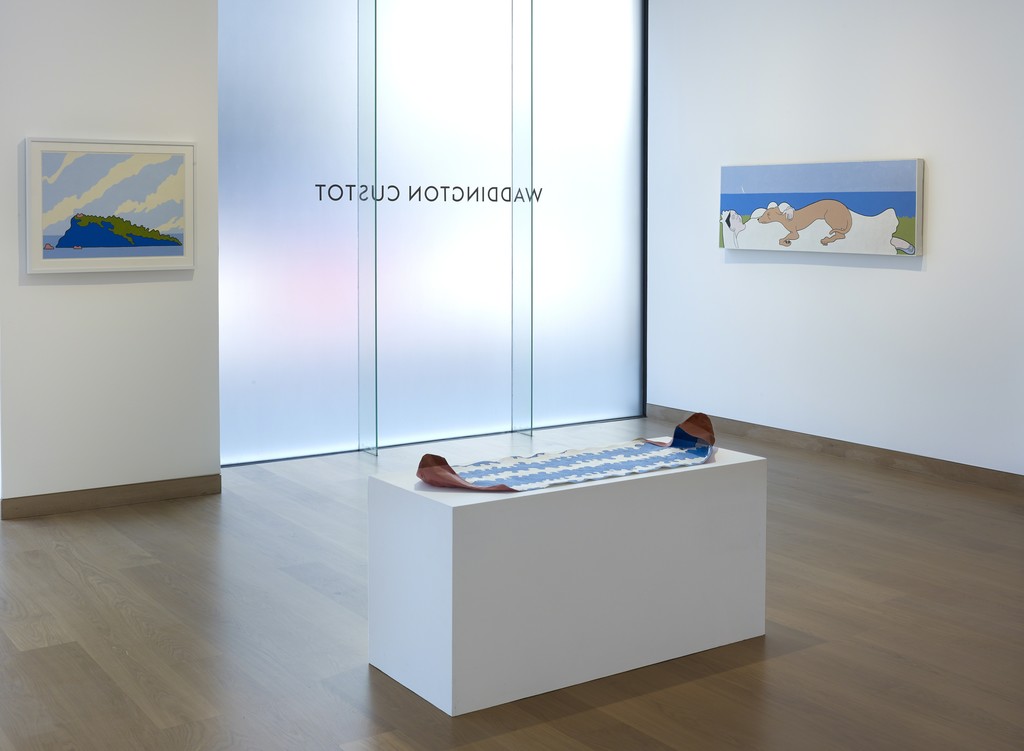 Waddington Custot is pleased to present a solo exhibition of paintings and painted objects by the Los Angeles
born artist John Wesley (b. 1928). The above quote describes what Wesley coined ‘The Henry Ford Syndrome’
and refers to the rhythmic pattern of repetition throughout his work. As Carolyn Christov-Bakargiev
remarked ‘repetition characterises modern life, rational thinking and serial, standardized production’ 2. It is
through repetition of motif, within and across Wesley’s paintings, that his surreal scenarios are constructed.
The exhibition will examine the graphic language and varied iconography used across his work from a fifty
year period, with many of the works shown in London for the first time.

Consistent formal elements combine to create Wesley’s identifiable visual formula. Colour is always limited,
often to a saccharine palette of blues, pinks and greens. Pictorial elements borrowed from an American
aesthetic run through his work, taken from photographs, magazines, book illustrations, cartoons and comic
strips. Tracing these allows him to strip down images to their key components, and outlines are then reversed
or repeated, overlaid or rescaled providing a visual framework. These techniques create flatness and a graphic
language which, like many artists at the time, was a result of making work in an age of mechanical
reproduction. Wesley utilises these formal elements but disrupts them through enigmatic subjects within
peculiar scenes. The characters within his works are juxtaposed with a seemingly illogical range of references
from pop culture to erotic encounters, from Americana to animals. Despite this, even the most absurd
subjects are underpinned by a rigorous, graphic structure.

Wesley’s work exists somewhere beyond the labels that it has accrued in the last five decades, Pop, Surrealism,
Minimalism and ornamental Rococo, and is much more aligned to contemporary artistic production in
refusing categorisation. It is the antithesis of the production line and his use of repetition is deliberately
inclusive of flaws; a motif turned upside down or a subtle change in direction or colour. This is what
separates him from the production line of Andy Warhol or the mathematical repetition of the Minimalists.
Nothing is taken too seriously, nothing is certain and the work continues to surprise us.

NOTES TO EDITORS
This is Wesley’s second solo show with Waddington Custot, the previous being in 2008.

ABOUT JOHN WESLEY
John Wesley (b. 1928, Los Angeles, California) currently lives and works in New York.
Wesley’s first solo exhibition was held at the Robert Elkon Gallery in 1963. Donald Judd was an enthusiastic
reviewer of this exhibition and Wesley’s work now sits alongside Judd’s at the Chinati Foundation in Marfa,
Texas. Also in 1963, Wesley’s work was included in The Popular Image at Washington Gallery of Modern
Art – an exhibition that included most of the artists later considered at the core of the Pop Art movement in
America.

Since then he has had over 50 solo exhibitions, including museum shows at MOMA PS1, New York (2000);
Fogg Art Museum, Harvard (2001) and Stedelijk Museum, Amsterdam (1993) among others. He has had a
retrospective of his paintings on paper at Krefeld Kunstmuseum in Krefeld, Germany (2005). In 2009, Wesley
presented a major retrospective hosted by the Fondazione Prada at Fondazione Giorgio Cini, San Giorgio
Maggiore, Venice.

Wesley has been granted a Guggenheim Fellowship (1976), and a National Endowment for the Arts Grant
(1989). In 2006 Wesley was awarded the Skowhegan Medal for Artistic Achievement in Painting from the
Skowhegan School of Painting and Sculpture in Maine.