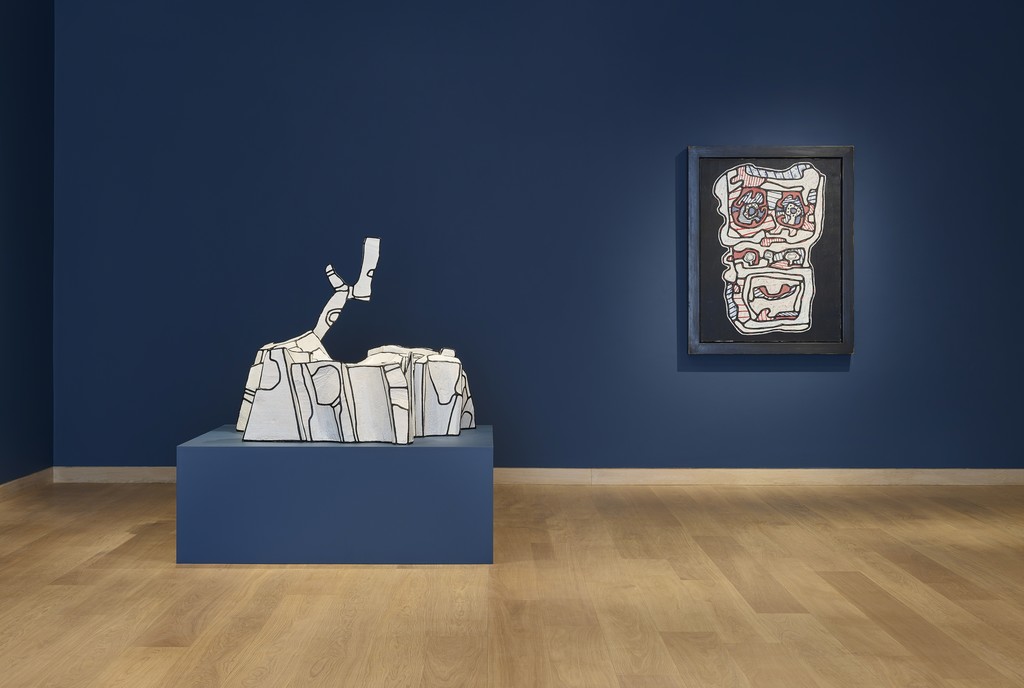 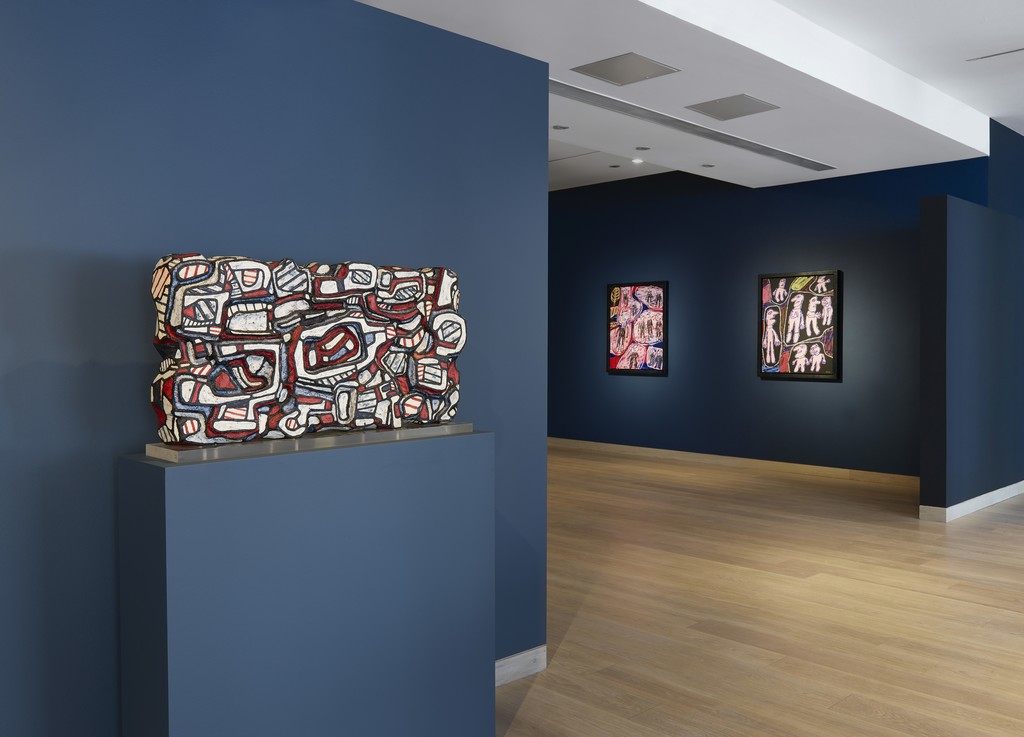 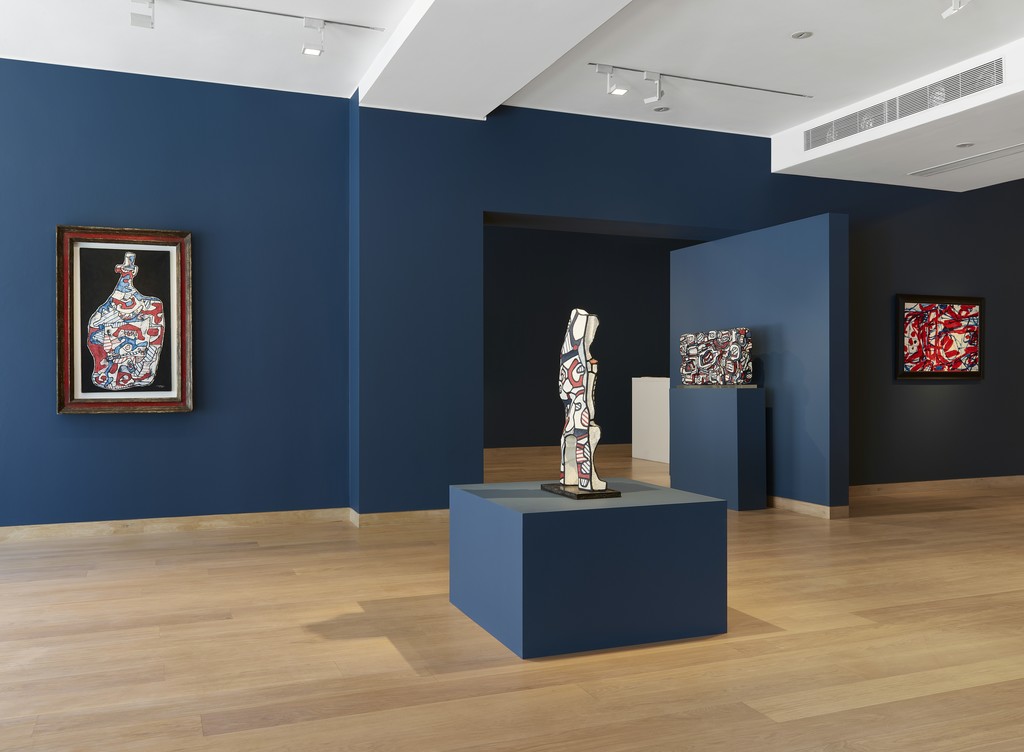 Waddington Custot is pleased to present an exhibition of paintings and sculptures by French artist Jean Dubuffet (1901–1985). Highlighting the varied exploration of subjects and materials in the artist’s career, the exhibition demonstrates the artist’s non-conformist attitude and boundless capacity for invention and experimentation.

One of the most important artists of the twentieth century, Dubuffet sought to create work which shunned traditional notions of beauty and favoured immediate forms of expression. He coined the term ‘Art Brut’ to describe the artistic expression that informed his own work, that of children and the mentally ill, believing that their innocent or untutored outlook gave them the most direct access to their emotions.

The earliest painting in the exhibition, ‘Haute tête en pomme de terre’ (1951), is characteristic of Dubuffet’s early work, an anonymous figure is carved out of the thickly impastoed surface. He turns the classical ideal of the portrait on its head, depersonalising the figure and not attempting to convey any physical likeness. Dubuffet did not consider the pursuit of beauty or visual pleasure to be valid objectives for an artist. Rather, he stated that art was ‘a language, an instrument of knowledge, and an instrument of expression’ that ‘addresses itself to the mind not the eyes.’ His Paysage du Mental (Landscape of the Mind) series, of the same period, such as ‘Paysage pétrifié’ (1952), is again constructed from heavily layered paint creating austere, monochromatic earth-toned surfaces.

During the summer of 1953, he continued to eschew traditional painting methods and began to construct collages using objects from nature. He introduced found materials such as butterfly wings, sand, gravel and dust. ‘Jardin de souffle cor’ (1956) is made with a collage of cut-out lithographs with printed textures, assembled to construct a jewel-like garden landscape.

Dubuffet’s L’Hourloupe series (1962–74), was his most-extensive period of work, originating from absent-minded biro scribbles made whilst on the telephone. These works are characterised by black painted outlines filled with solid colour or hatching of blue or red. Dubuffet’s interest in portraiture remains in ‘Réchaud-four à gaz IV (Autoportrait)’ (1966), but he also uses a new visual language to tackle varying subjects including the still life, such as in ‘Bouteille III’ (1965). Dubuffet described his Hourloupe works as a ‘festival of the mind’ and during this period he began to extend his artistic reach to explore ambitious sculptural, theatrical and architectural installations.

Moving into Dubuffet’s late period, the exhibition focuses on both the Partitions and Psycho-sites, two groups of work that were made in 1980 and 1981. In his Partitions, figures are placed on a background dominated by vivid, irregular sections of colour. The pedestrians, in ‘Voie piétonnière’ (1981), are separated with defined linear spaces which give the appearance of collage elements. Dubuffet juxtaposes uniform, flat colour against expressive mark-making, creating a dynamic contrast. Following on from this, works become more homogeneous in their over-all appearance. Psycho-sites, ‘Site avec 5 personnages’ (1981) and ‘Site avec un personnage’ (1981), represent the interior of the mind with figures contained within the chaos of the highly gestural, unrestrained brush-work around them.

The paintings from the last years of Dubuffet’s life, Mires (Test-Patterns) such as ‘Mire G 72 (Bolero)’ (1983), contain no recognisable figures or objects and are composed of a web of expressive lines covering the entirety of the surface. By the elimination of all referential imagery, Dubuffet reduced his paintings to the most uncontrolled expression of emotion. Dubuffet saw the works as ‘focus[ing] the eye on a point of endless continuum.’