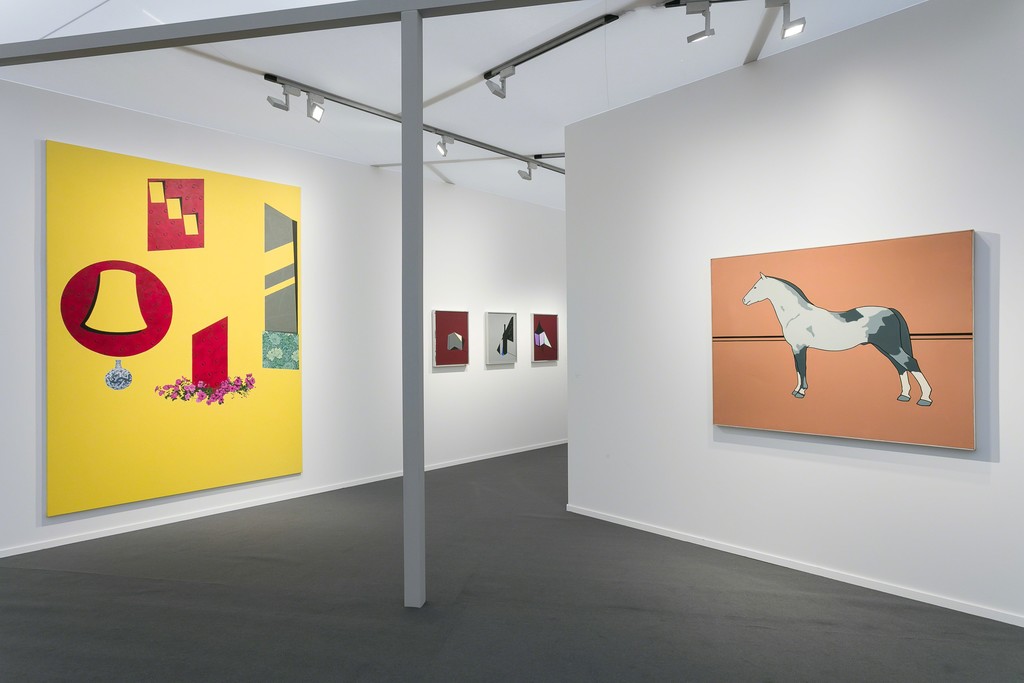 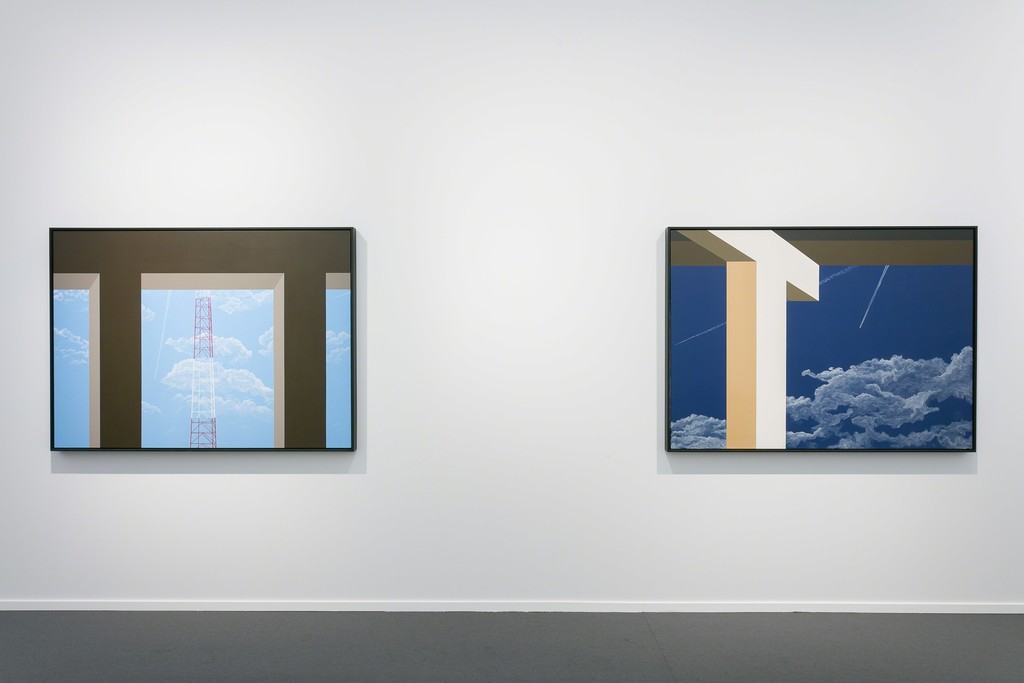 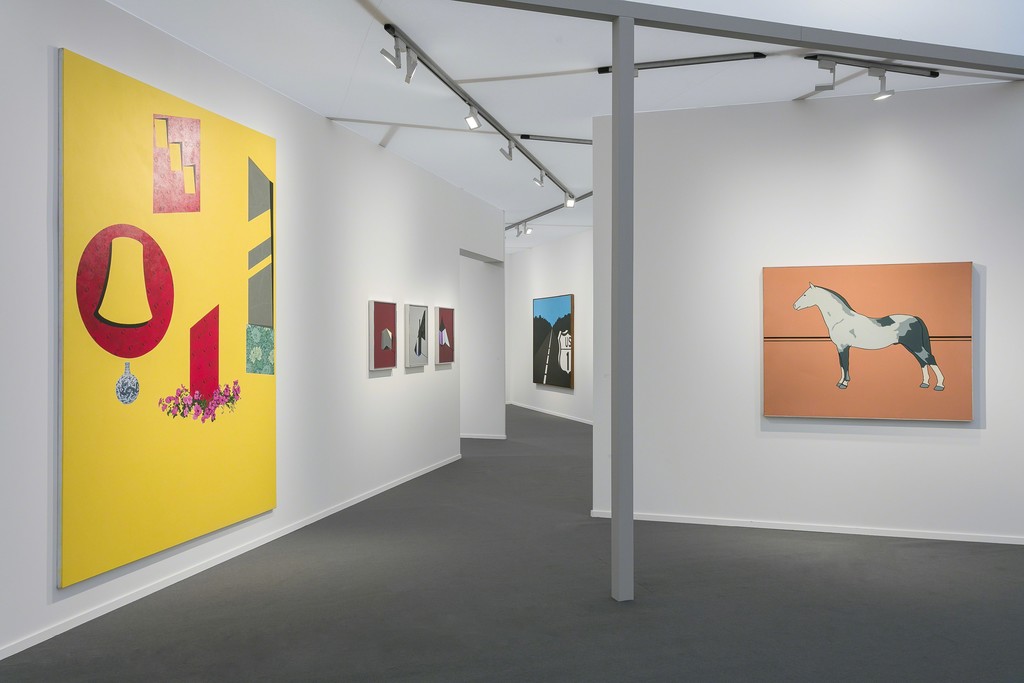 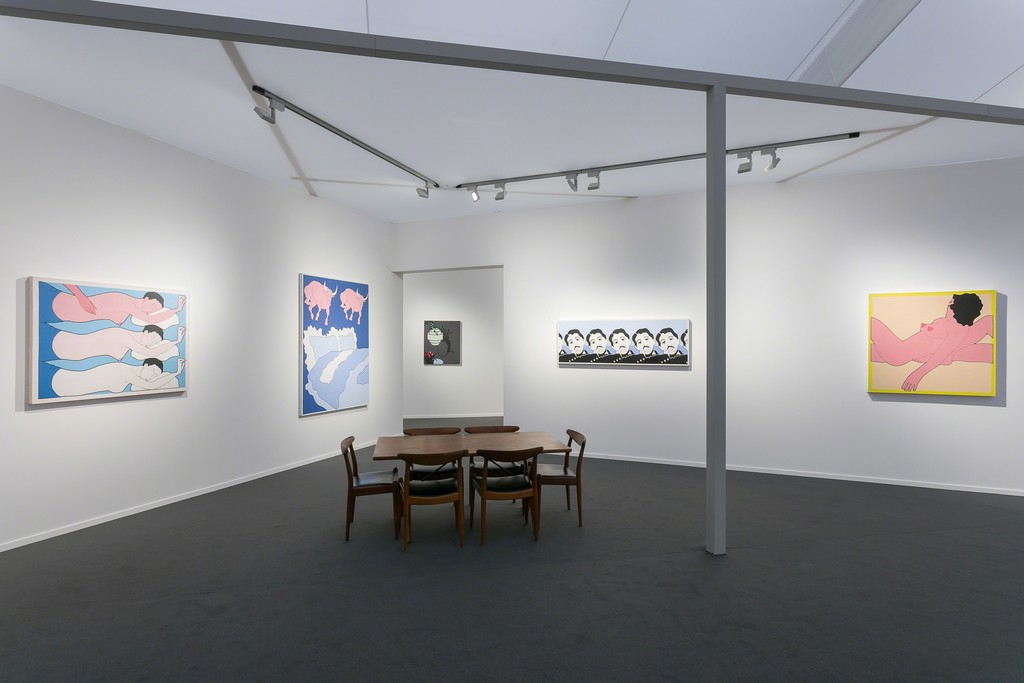 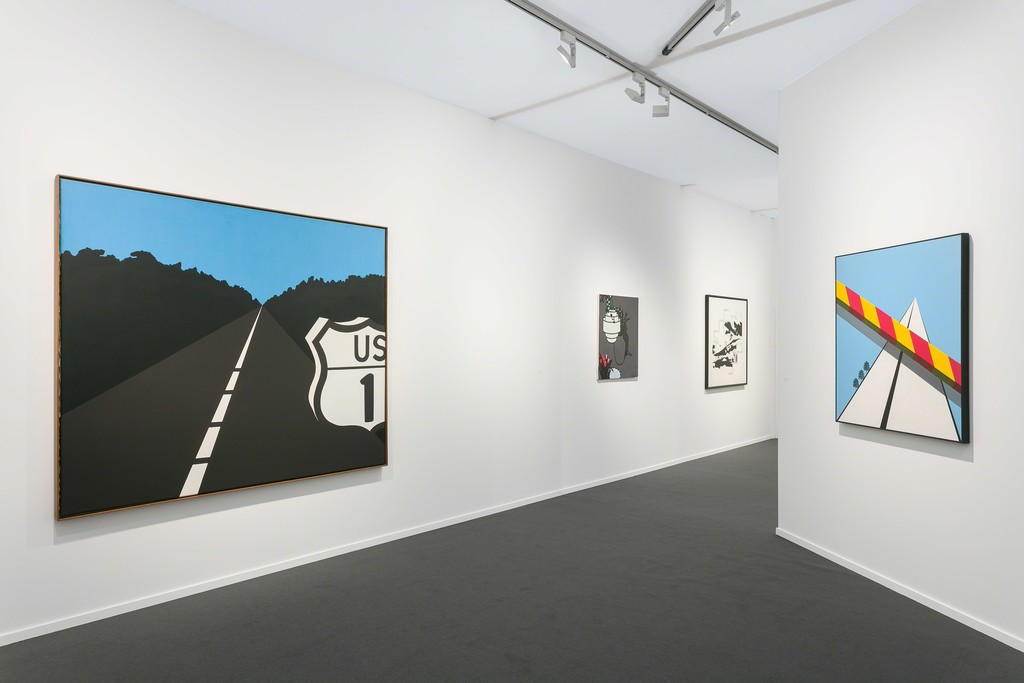 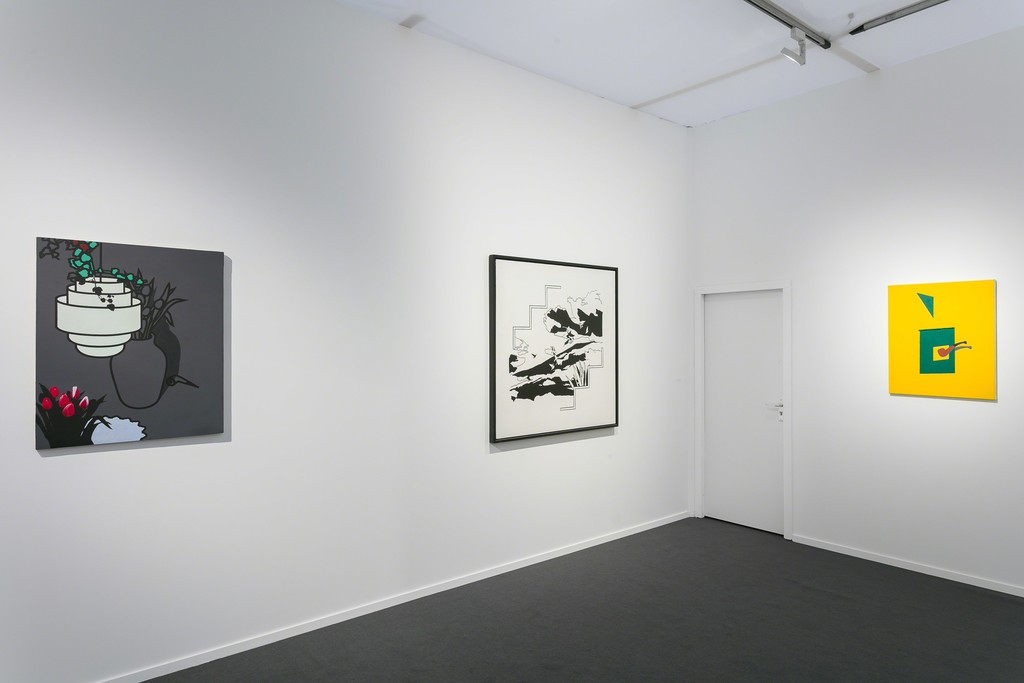 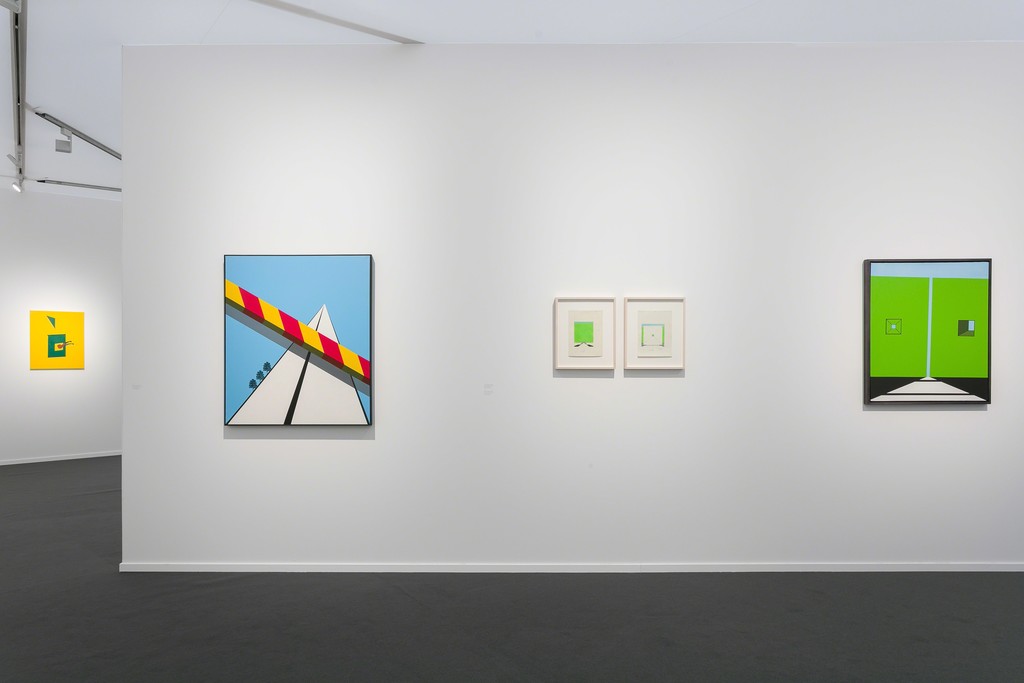 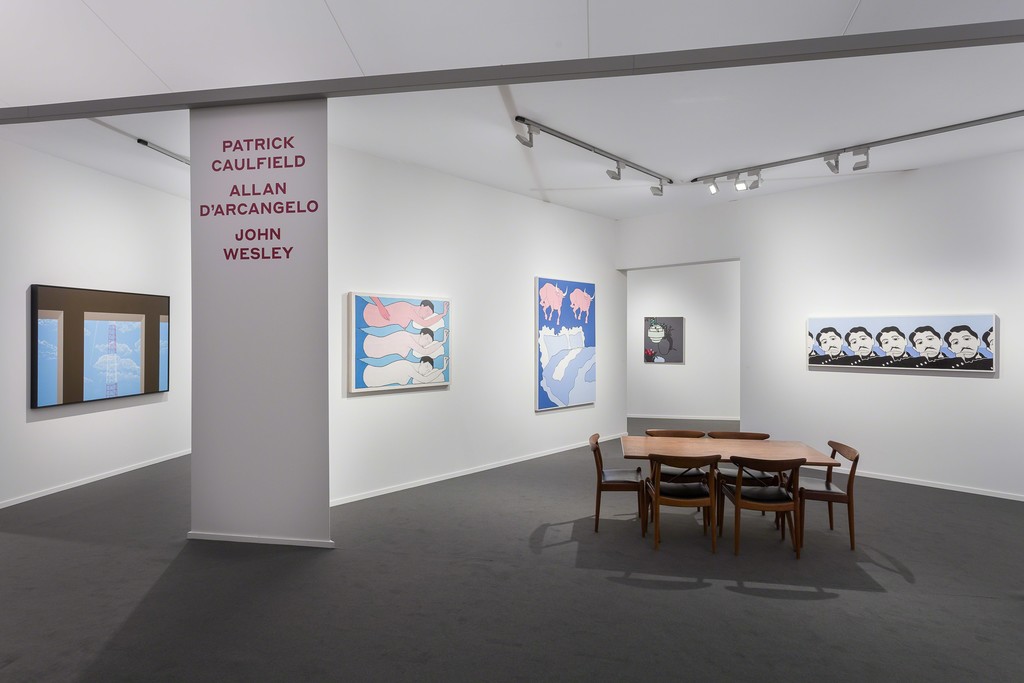 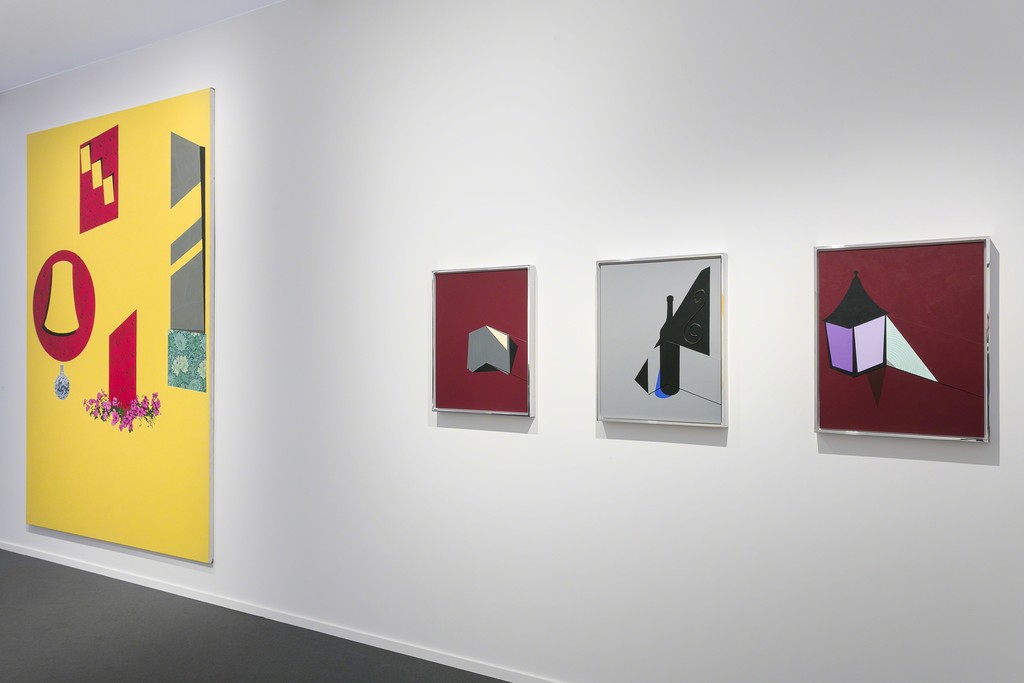 Waddington Custot is pleased to present A Bend in the Road, a curated exhibition of paintings by British
artist Patrick Caulfield (1936–2005) and American artists Allan D’Arcangelo (1930–1998) and John Wesley
(b.1928). These three painters became prominent on the international art scene in the late 1950s and early
1960s, and share formal sensibilities typical of the transatlantic Pop art movement. Using acrylic paint,
applied in flat planes of colour and delineated by precise, bold lines, they describe their surrounding
environments. They also share a discomfort with the ‘Pop art’ label, used by others to describe their work,
conscious of an oversimplification of their endeavours. This presentation highlights each artist’s unique
aesthetic, and individual experience, encompassed in a shared formal language.

‘I am primarily interested in the image. The means are minimal,’ said Caulfield in 1998, ‘I am not worried
about surface. Whether the painting is realistic or naturalistic, with details, painted from life or photographs.
It doesn’t bother me.’ Painted on canvas or board, Caulfield’s interior settings, still lives and landscapes have
a familiar repertoire: limited colour palette, linear structure, and an attention to light and shade, all forming
what critic Martin Maloney referred to as a ‘world found through secondary sources.’ Caulfield eschewed
Pop’s lurid brightness for richer and darker shades—indigo, burgundy, mustard—indulging in a noir,
melancholic mood. Devoid of figures, human interaction is inferred through a warm nostalgia or the promise
of a good time. The viewer intuits that something is about to happen or has already happened. Like all
memories, some images are sharp and brought into focus, whereas others are reduced to flattened outlines
and symbols.

D’Arcangelo saw art as a social and political tool. His work records roads, signs, pylons and bridges with a
detached and uniform technique, sometimes fragmented or serialised, as if seen from a moving car. His
landscapes are non-specific locations, using symbols that resonate with viewers worldwide. ‘People would
argue that I wasn’t a Pop artist because the work wasn’t flat, because it dealt with one-point perspective,’ he
said in an interview in 1988, ‘but when you deal with one-point perspective, it’s both flat and illusionistic at
the same time. And the illusion that happens is an intellectual one.’ D’Arcangelo rarely used figures but
emphasised the viewer’s presence through one-point perspective. In his later paintings, one can see an
airplane in flight, ‘perhaps one of the tiny clouds that could be seen above the horizon in the highway skies 20
years before,’ wrote Walter Guadagnini in 2005, ‘the landscape changes, but the traveller remains the same.’

‘I would be tempted to describe Wesley’s art as an ‘unsanctioned but ecstatic’ take on Pop art,’ claimed critic
Dan Fox in 2016, ‘it is a syncretic Pop … made ecstatic by the possibilities of Minimalism and Surrealism.’
Wesley’s graphic, irreverent style is reminiscent of comic strips and cartoons, celebrating high and low
culture. Hard-edge planes of unsaturated color—a limited palette of plastic pink, icy blue, violet, and
peppermint—are encased by thick, black outlines. ‘Many people find my pictures funny which I rather enjoy,’
he said in 1976, ‘I think much of my intent is humor.’ Sources and symbols, from historical figures, to naked
women, and everyday objects, are repeated, rescaled, and re-appropriated. The borders are deliberately
handmade, wobbling slightly, as if the figures might break through the frame and tumble out.

All three artists reached their artistic maturity during a period of significant social and cultural change in
Anglo-American society. The brooding atmosphere of Caulfield’s ‘Landscape with Birds’ (1963) or
D’Arcangelo’s ‘Numinosum’ (1974), reflects an underlying psychological tension in the paintings. Behind the
comedy of Wesley’s pink naked bodies and dancing bulls lurks something more serious. Beyond the
saccharine palette and familiar objects, a fine thread of philosophical contemplation ties Caulfield’s domestic
interiors, D’Arcangelo’s infinite highway, and Wesley’s serialised figures, together. At first glance, these
paintings may appear flat, but there is a painterly poetry in their intimacy and vulnerability. They are
visually cool and poetically resonant dramas of simplicity and ambiguity, and together present an ode to
modern and contemporary life.