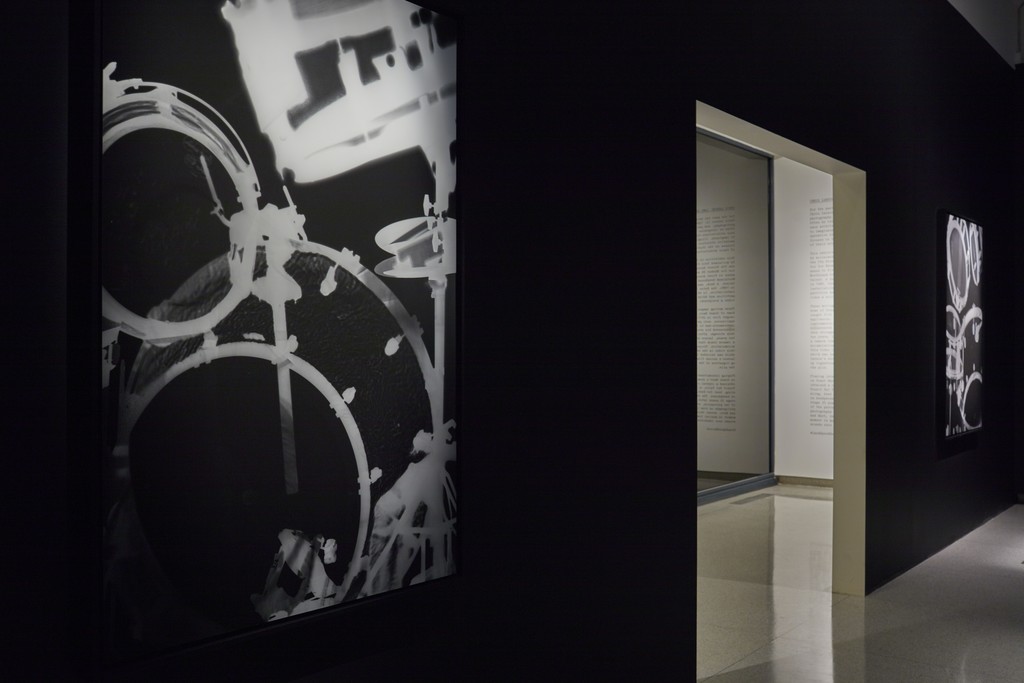 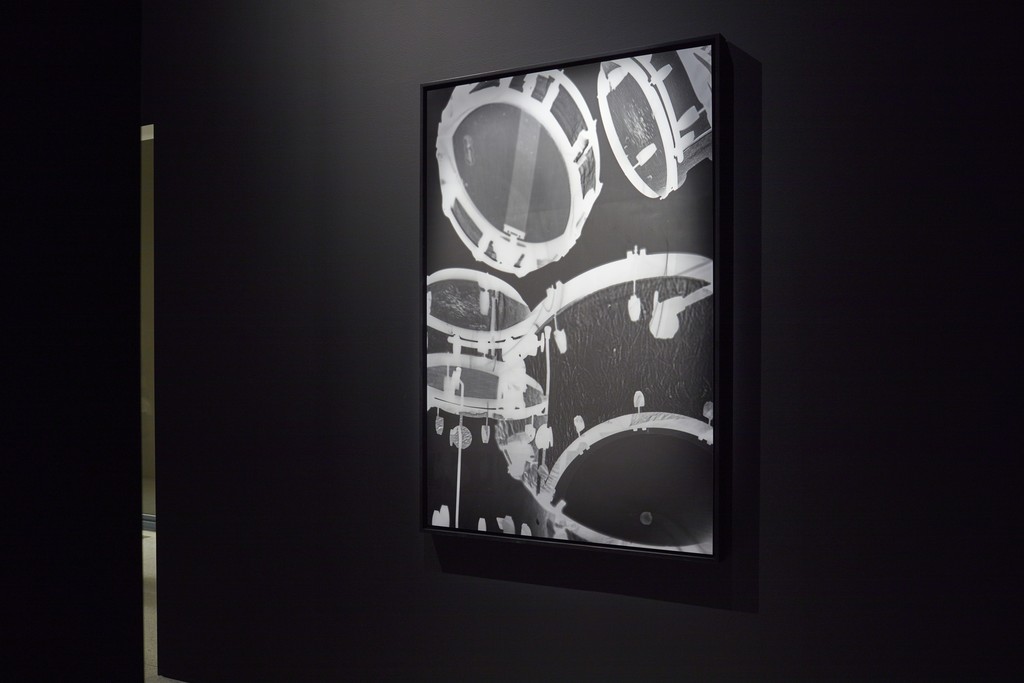 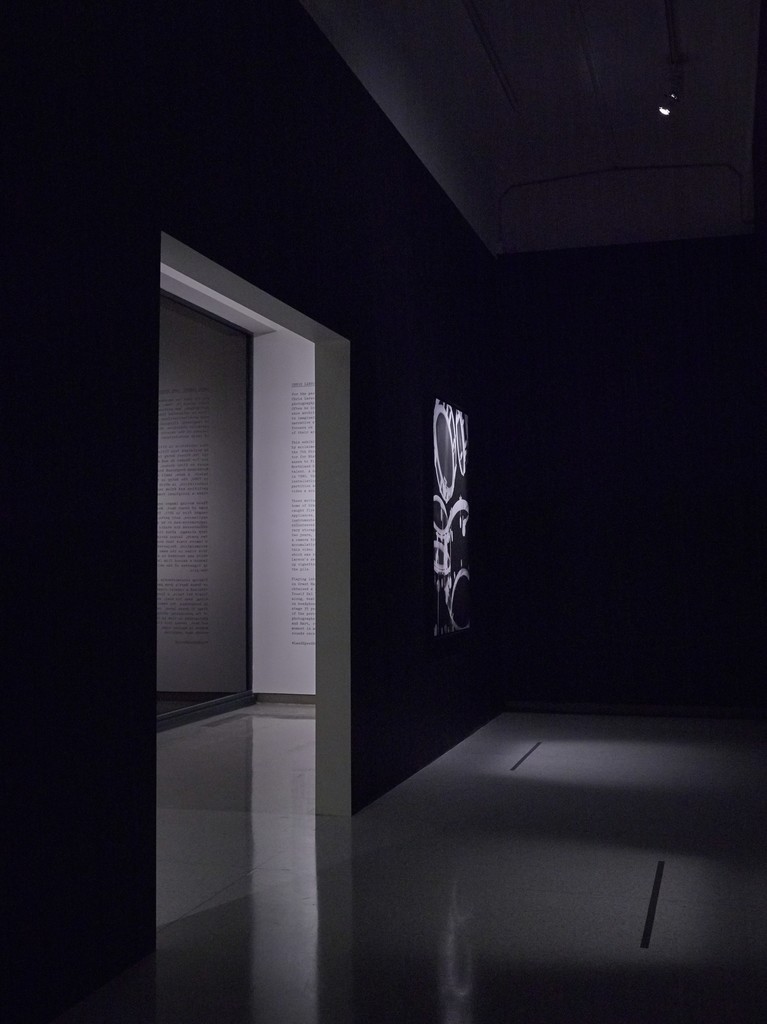 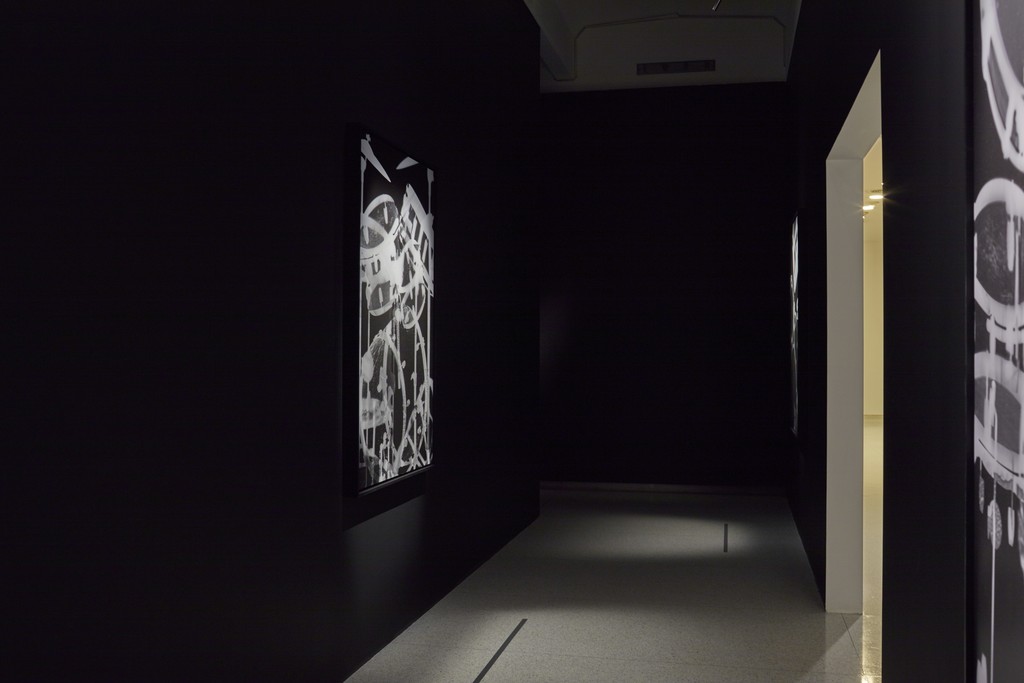 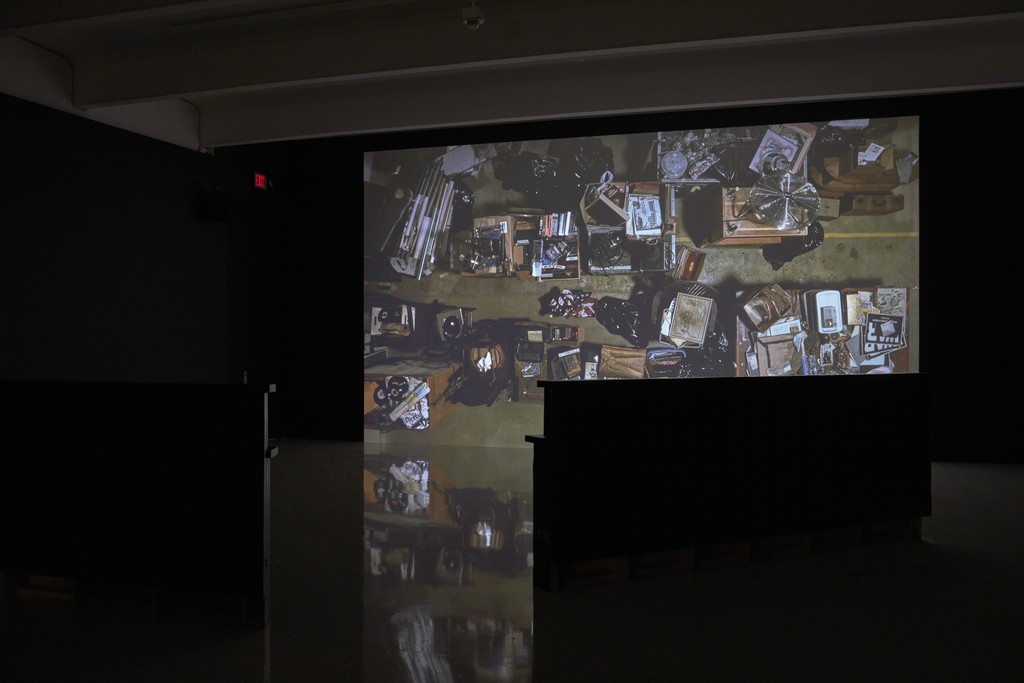 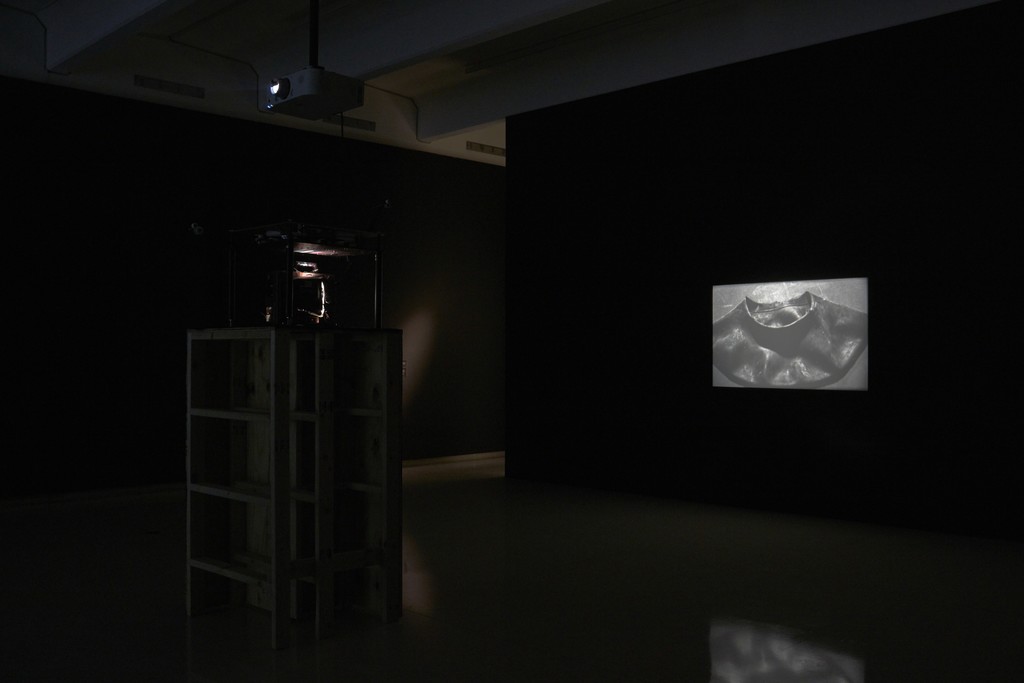 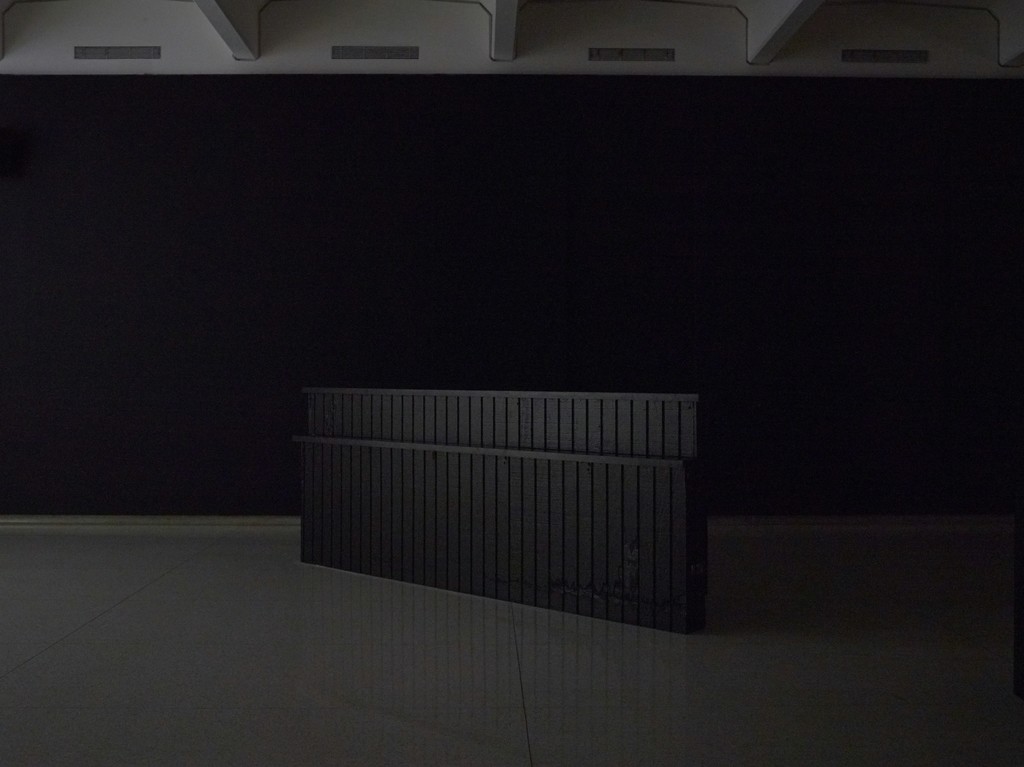 The Walker Art Center presents Chris Larson: Land Speed Record on view June 9, 2016 through January 8, 2017 in the Medtronic Gallery. The exhibition is titled after Land Speed Record, the album by acclaimed St. Paul, Minnesota punk band Hüsker Dü that rose to cult status after being recorded live at the 7th St. Entry on August 15, 1981. At the Walker, Larson’s gallery environment is comprised of two films, a sculpture, a photograph, and sound. At the center of the installation are two films—one color, one black and white—exploring a group of objects that occupied Larson’s studio for two years. The items originated from the childhood home of Grant Hart, Hüsker Dü’s founder and co-songwriter, which caught fire and partially burned in 2011. The smoke-blackened contents—furniture, appliances, antiques and collectibles, auto parts, ephemera from gigs, art supplies, clothing, master tapes, musical instruments—had to be quickly cleared from the home, and Larson volunteered his studio (a repurposed industrial warehouse space) for their temporary storage.

“I started to think about what these objects became when removed from their domestic function and relocated to the limbo of my studio, a space dedicated to my own formal and artistic experimentations,” Larson explains. “I began to look at the grotesque wreckage of several of Grant’s kits of percussive instruments, drums, cymbals, and sticks which once moved at ferocious speed, now reduced to stasis. There are also Studebaker parts (a fascination of Grant’s), speedometers, hoods, doors, engines, axels, tires, and wheels designed to propel these automobiles quickly over the landscape, now dismembered, covered in blackened dust, silent and still. It is the juxtaposition of this potential speed and current stasis that interested me, and made me think about how these objects would look through the lens of a camera moving slowly over the pile.”

To attain this perspective, Larson devised a motorized track and attached a camera
that could capture a slow, methodical pan across the 85-foot-long accumulation. Like the 1981 album Land Speed Record, which was recorded live in a single take lasting 26 minutes, 35 seconds, the video is the same duration, projected at near life size in the gallery space. Facing it is a second 16mm film (also 26:35) that features Larson’s black and white close-up vignettes of the salvaged objects. Accompanying the films is a sculptural installation built by Larson and based on the interior of 7th St. Entry. An incubator not only for Hüsker Dü but for many other Twin Cities’ bands, the Entry (as it is now called by its regulars) is the black-box annex to First Avenue, the now-storied music club in the former Northland-Greyhound bus depot, and a premier Twin Cities music venue for emerging talent. Cramped, with a capacity of 250—and hewed from the bus depot’s former cloakroom and café, the club has been relatively unchanged over the last 35 years. This room is the site that has inspired another component of Larson’s installation, which includes the artist’s meticulously reconstructed replica of the club’s black room partition and drink rail, here dividing the gallery space and providing a sculptural frame for the films. The final element of the installation is a sound recording based on Grant Hart’s drum part on the original Land Speed Record. Larson enlisted Yousif Del Valle, a young musician with a passion for hardcore punk, to learn the track and to play along—beat for beat—while listening to the original 1981 album on his headphones. Played on a crystal clear drum kit augmented with a single Ludwig snare drum belonging to Hart and rescued from the fire, the resulting recording, made on the 7th St. Entry stage, captures the breakneck speed of the percussion, stripped away from its original source and heard as pure sound within the walls of the now iconic music venue.

A musician in addition to being a visual artist, Larson’s interests are broad. His work is rooted in sculpture, and also incorporates film, video, photography, performance, drawing and painting. Often, he integrates these elements into sculptural installations that reference architecture—from vernacular building types (coal mine tipples, shotgun shacks) to imaginary, sometimes illogical constructions—while crafting a unique narrative armature. The sculptural and filmic scenarios he creates are a melding of the very physical (Larson’s highly conceptual projects are rooted in his skilled carpentry) with the dreamlike. Within the structures he builds, Larson often lays plans for some unexpected action—as in the rural shack encrusted inside and out with ice and housing a strange, human-powered machine (Deep North, 2008); or the film Crush Collision (2006), which featured Hart among its performers, in which a rough-hewn machine, a gospel quartet, and a drummer share parallel narratives and spaces within a floating house adrift on a lake.

The process of replication in Chris Larson: Land Speed Record builds on the artist’s recent projects that have investigated specific architectural sites. For Celebration-Love-Loss (2013), he meticulously constructed a full scale, wood and cardboard facsimile of the only Marcel Breuer-designed modernist home in the Twin Cities, then proceeded to torch it in a grand spectacle of flame on the banks of the Mississippi River in St. Paul. With the exhibition Chris Larson: Land Speed Record he has recreated an environment and a moment in time that invites layers of narrative and meaning.