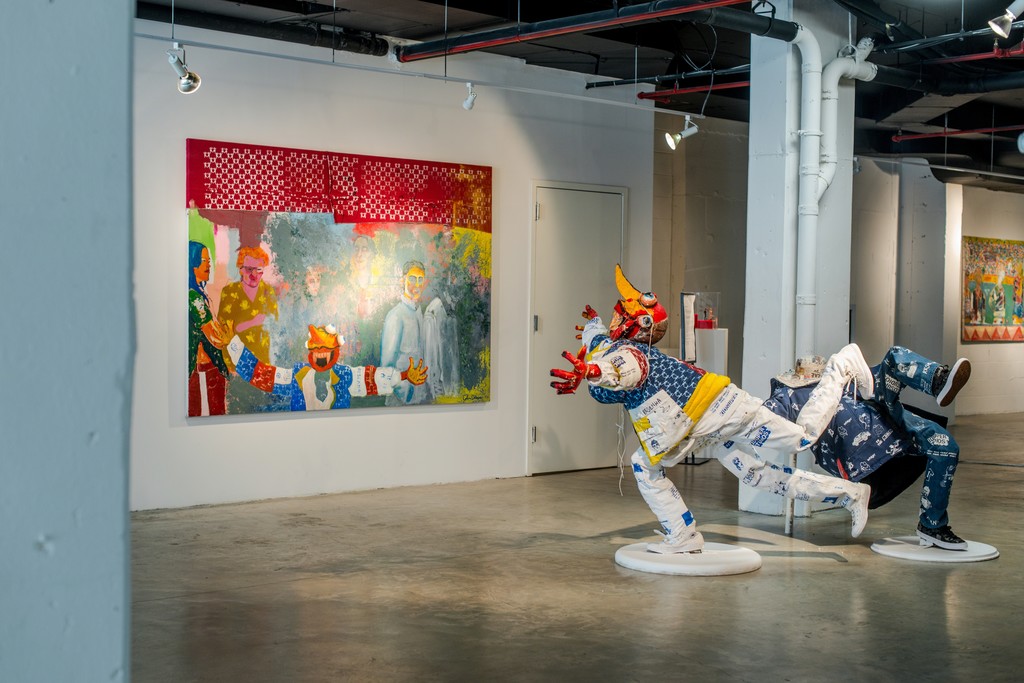 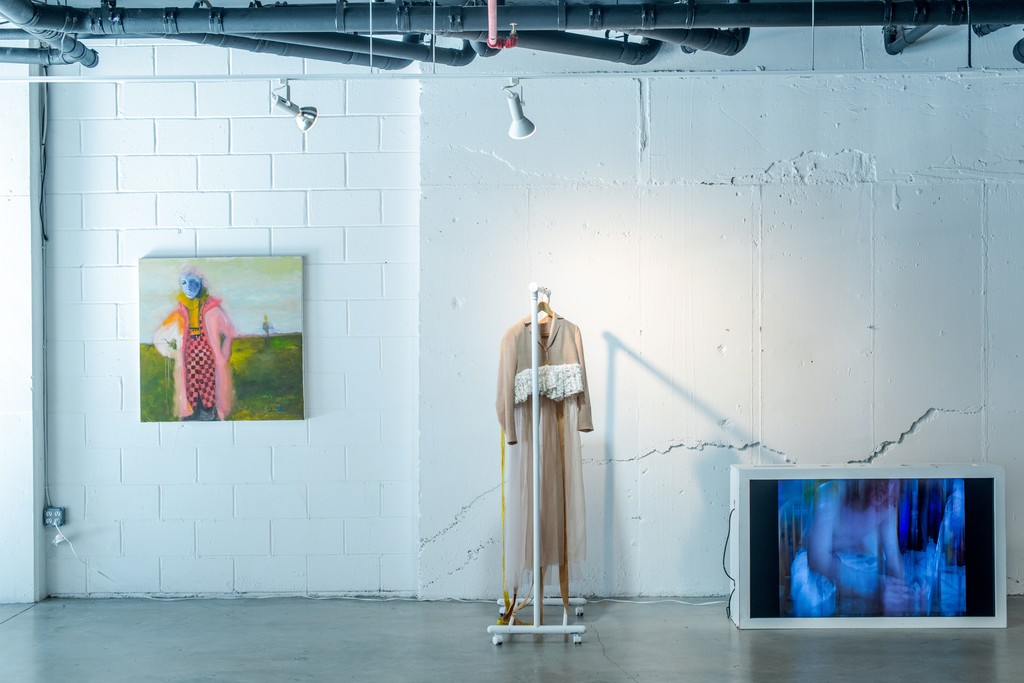 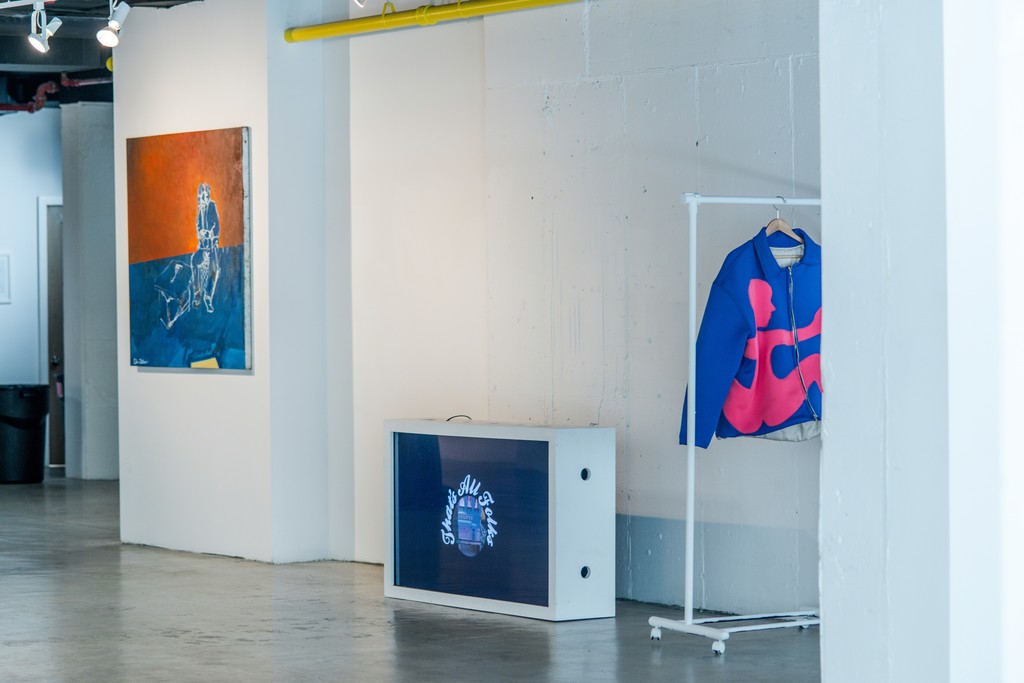 Wallplay is pleased to present Flying Machine, the highly anticipated debut solo exhibition of artist, Colm Dillane at Gallery 151. Centered around Dillane’s striking large scale oil paintings, Flying Machine is a metaphor for Dillane’s evolution. The artist was discovered by curator Laura O’Reilly, who was inspired by his work ethic and constant output of art through his brand, KidSuper. After witnessing firsthand the superhuman challenges Dillane would overcome to complete billboard murals, lookbooks, short films, clay animations, music videos, and custom art projects, O’Reilly believed that his spirit and artistry should be experienced in a gallery setting. Dillane’s relentless commitment to expanding his creative process fuels his prolific explorations in all forms of media. This first series of oil paintings marks the beginning of a new and exciting chapter in Dillane’s practice.

Dillane’s paintings show a strong post-impressionist influence. The artist appears to align his aesthetic with late 19th century masters, in particular stylistically conjuring the spirit of both Toulouse Lautrec and James Ensor. In this, his works articulate an innate desire to belong within the lineage of Western art history. Although Lautrec and Ensor were not involved in the same circles, they have commonalities with Dillane’s own work, resonating beyond the surface. Lautrec is known primarily for painting sordid nightclub life in Paris. Ensor was captivated by the Ostend Carnivals, depicted in many of his works. Dillane’s works depict Carnival-esque, bohemian characters, which he brings together in his paintings, the same way he does in real life with KidSuper Studios. People are paramount to his compositions; the gaze of his characters engage the viewer in unspoken conversation.

The exhibition features multiple dimensions of Dillane’s creative practice. The oil paintings in Flying Machine are accompanied by works on paper, sculptures adorning Colm’s fashion line, KidSuper couture, and Beheld’s 3D photo booth. Dillane is a modern Renaissance man whose uncanny ability to capture the essence of being human adds a genuine energy to his practice. Aiming to resonate with the viewer in a unique way, Flying Machine gives gallery goers the opportunity to become part of the exhibition. After being 3D scanned, guests can receive looped videos of themselves flying through the artist’s painted environments.

Leonardo Da Vinci’s flying machine never came to fruition in his lifetime but he remains to be celebrated for expressing the mere potential and imagination of the idea. The concept of failure is embraced by Colm; he views it is a natural part of the creative process. What matters most to him is that he is constantly challenged and pushing his imagination to new limits. Like the Wright brothers, who had a child like faith in their ability to fly against all odds, with absolute belief and perseverance, Dillane will take flight no matter how many times he may fall. These explorations may very well become the desired early works of a celebrated artist.

About Colm Dillane & KidSuper
Colm Dillane was born in New York City in 1991. He is the multimedia artist & entertainer behind KidSuper, a hybrid art brand with a storefront and studio in Williamsburg. Dillane graduated with a degree in Mathematics from New York University and played professional soccer in Brazil for a year between highschool and college. A wide range of life experience fueled Colm’s super hero imagination & need to create his own world through art & design. KidSuper’s mission is to remind people that anything is possible. His work has been worn by and endorsed by some of the top musicians and creatives of today.
www.kidsuper.com | @kidsuper

About Laura O’Reilly & Wallplay
O’Reilly is the founder of Wallplay, the experiential arts & innovation network, stationed at the New Museum’s creative technology incubator, NEW INC. Her career in the artworld began when she was a teenager at Deitch Projects in 2007. She went on to become the Associate Director at The Hole during its first year on the Bowery & has been working with Gallery 151 as its director and guest curator for over a decade. Wallplay manages the programming at Gallery 151, which is made possible by the generous patronage of Michael Namer & Alfa Development.
www.wallplay.com | @wallplayground

About Beheld
Beheld is building the photo booth of the future. This fun and exciting new experience uses 3D scanning technology and advanced software to launch visitors into the digital dimension. In an instant, a customizable 3D avatar of yourself will be created and ready for sharing on social media. You can take one step further and 3D print a miniature version of yourself or your friends in full color. Founded in New York in 2017, Beheld has plans to expand their offering to events and venues all across America and Europe.
https://beheld3d.com/ | @beheld3D