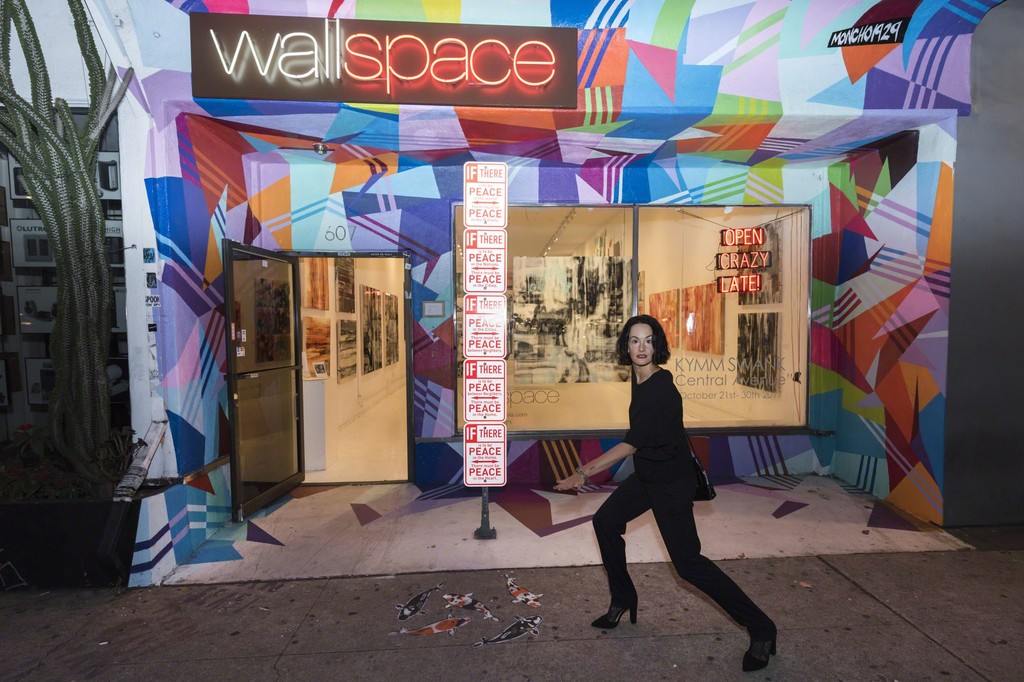 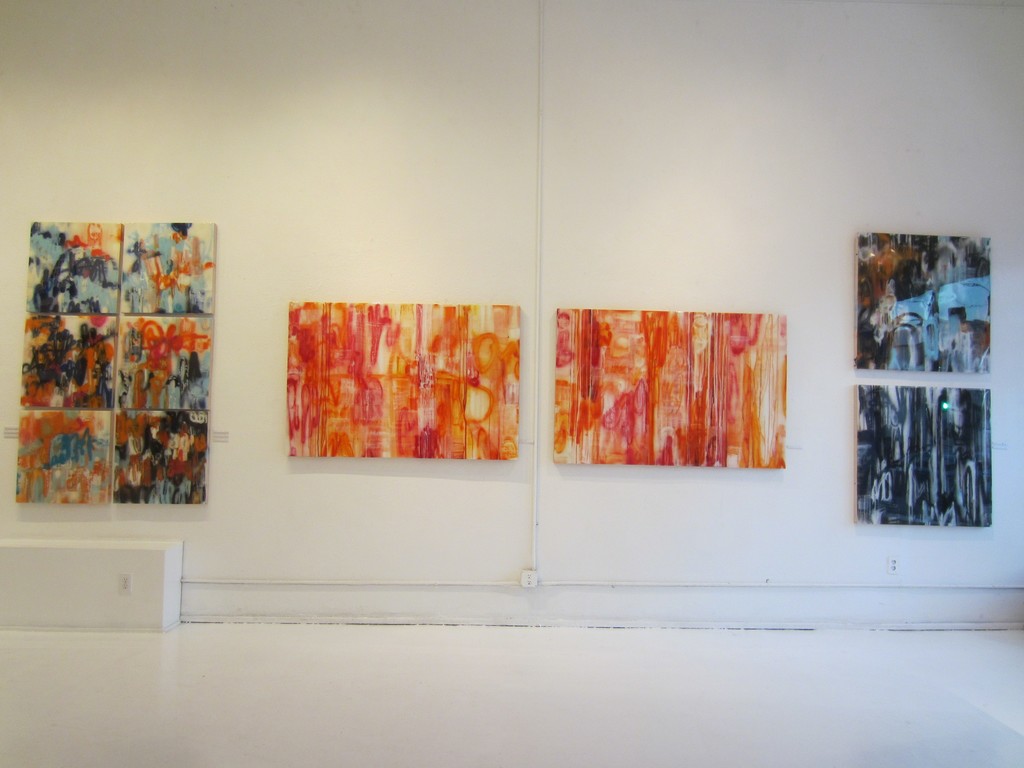 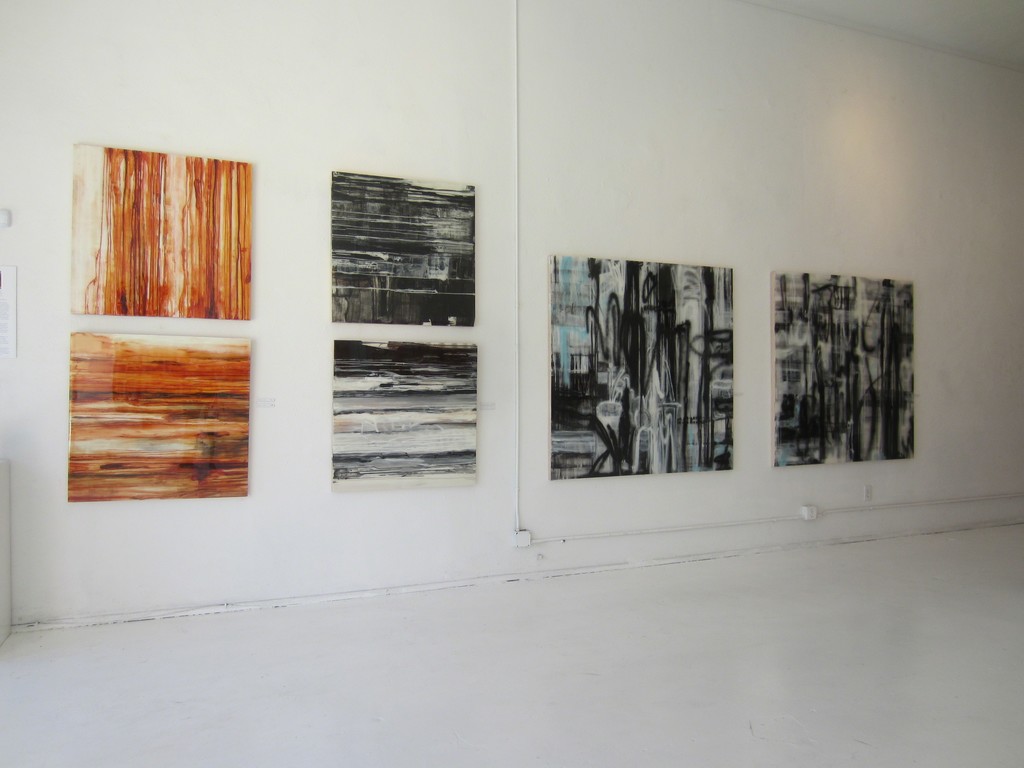 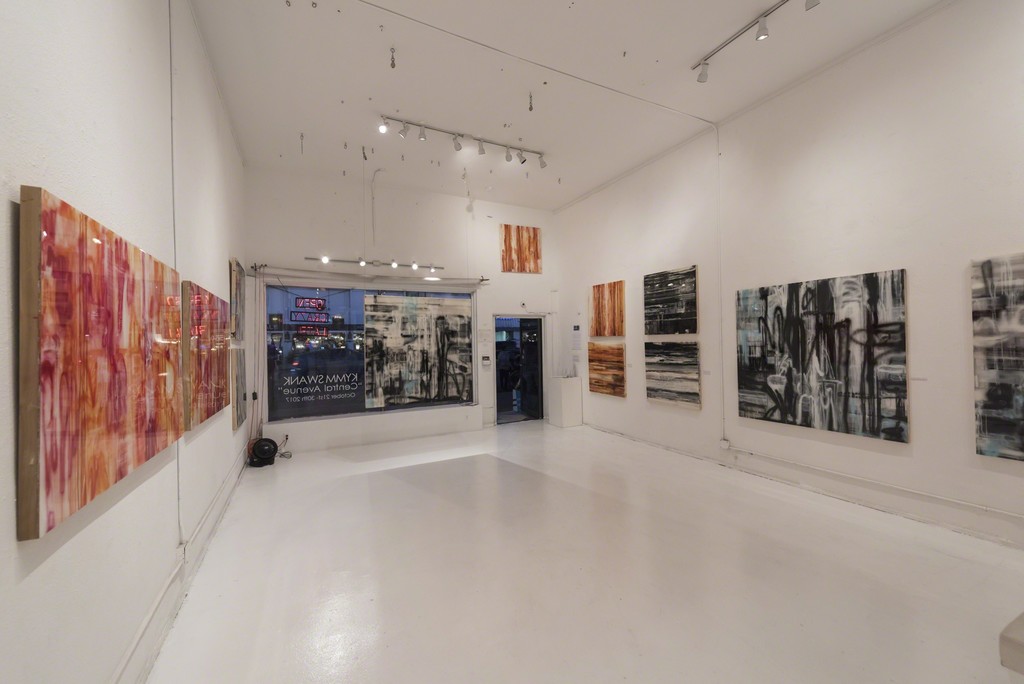 Kymm Swank is an abstract painter whose works are based on the urban landscape. For her second solo exhibition at Wallspace she will present work from two recent series: Central Avenue and St. Louis No 2. In her acrylic and spray paintings on panel with resin, she captures the atmosphere and feelings of these cities, representing them as abstract gestures. Interested in how cities change - the constantly evolving skyline of downtown Los Angeles permeates her Central Avenue paintings and is represented as black and white vertical strokes layered over horizontal washes suggesting this evolution. These paintings explore the tensions as new replaces old - the gentrification and proliferation of luxury developments - whitewashing graffiti and the personality of the city. The paintings in her St. Louis No 2. series feature rust-color striations and blurred bits of language and were inspired by the patterns on weather-worn above ground tombs in the cemetery.

In her own words: "I work intuitively in the moment layering paint until a distinct rhythm between the line and color develops. The resulting juxtaposition of a rigid repetitious shape imposed upon deep vivid colors imparts a feeling of contained, yet potentially explosive energy." For Swank the city is a place full of patterns, colors and life. In her work she explores these relationships making sense of these discrepancies through the process of painting. Her works celebrate the beauty that can be extracted from the chaos of the urban environment.

Swank is a self-taught artist originally from Kansas City who now lives in downtown Los Angeles. Her work has been featured in numerous exhibitions since 2009 including: "Structural Abstraction," Wallspace LA/Keystone Galleries (2014), "Structures," Upper West, Santa Monica (2011) as well as in group exhibitions at The Los Angeles Municipal Art Gallery and Sonia and Co gallery. Her work as also appeared in several TV and film productions including "MadMen," American Horror Story and "NewsRoom."

Wallspace is a dynamic gallery on La Brea that shows art in a non-conventional setting. Hung salon style on 14' high walls, the gallery aims to create a floor-to-ceiling visceral experience. We are excited about finding new visions and contributing to the launch of careers whilst also representing more established Los Angeles based artists. We regularly present solo shows and have a permanent rotating collection of art on view.