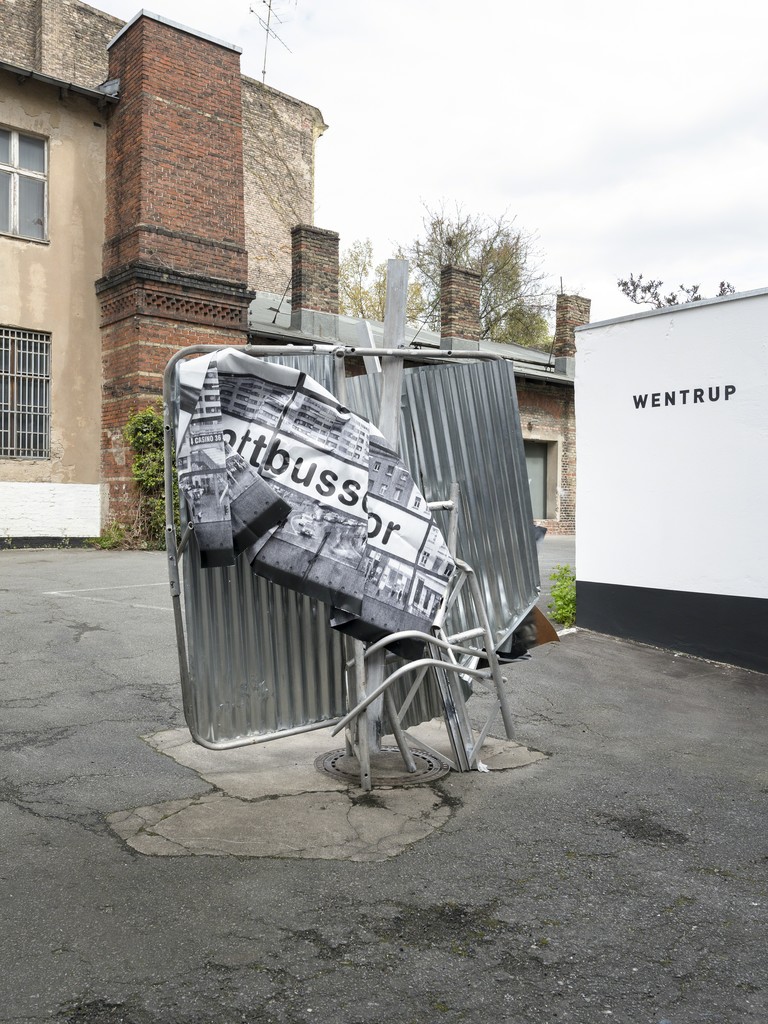 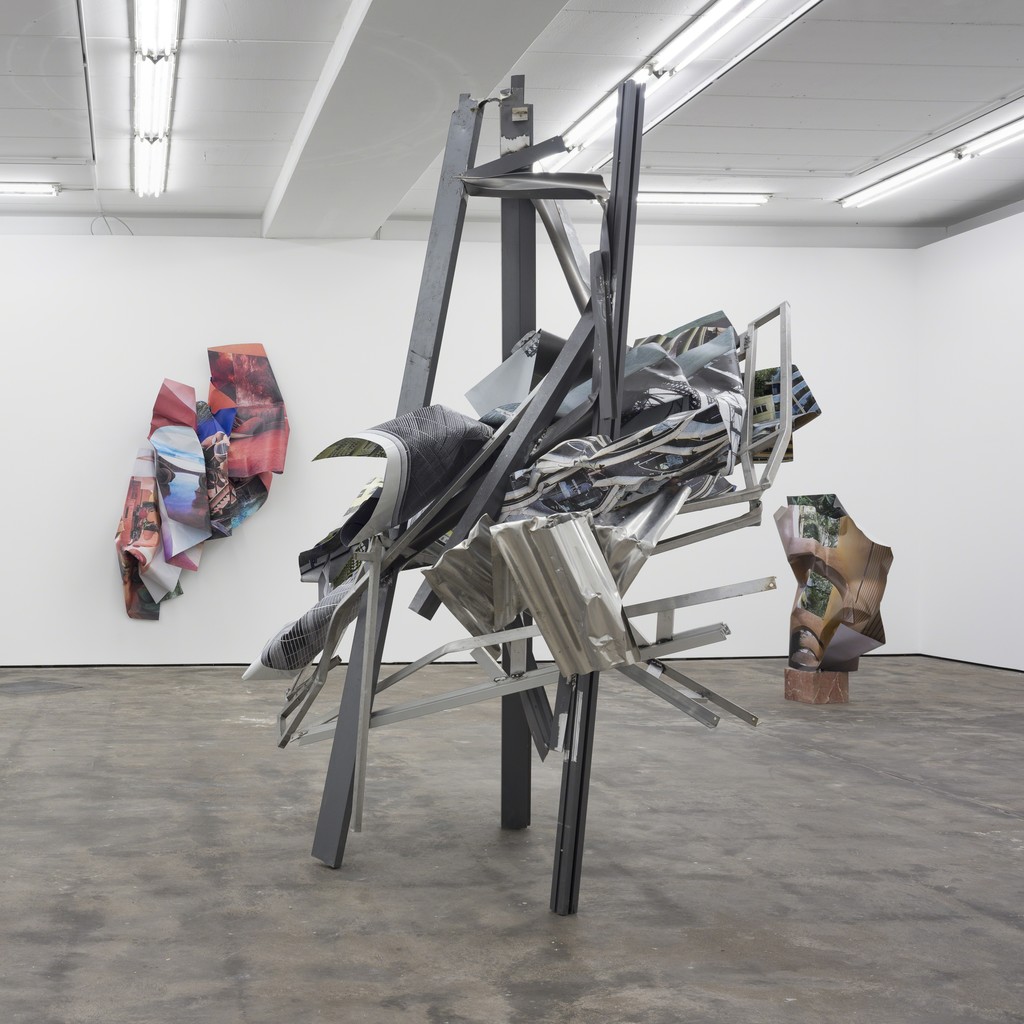 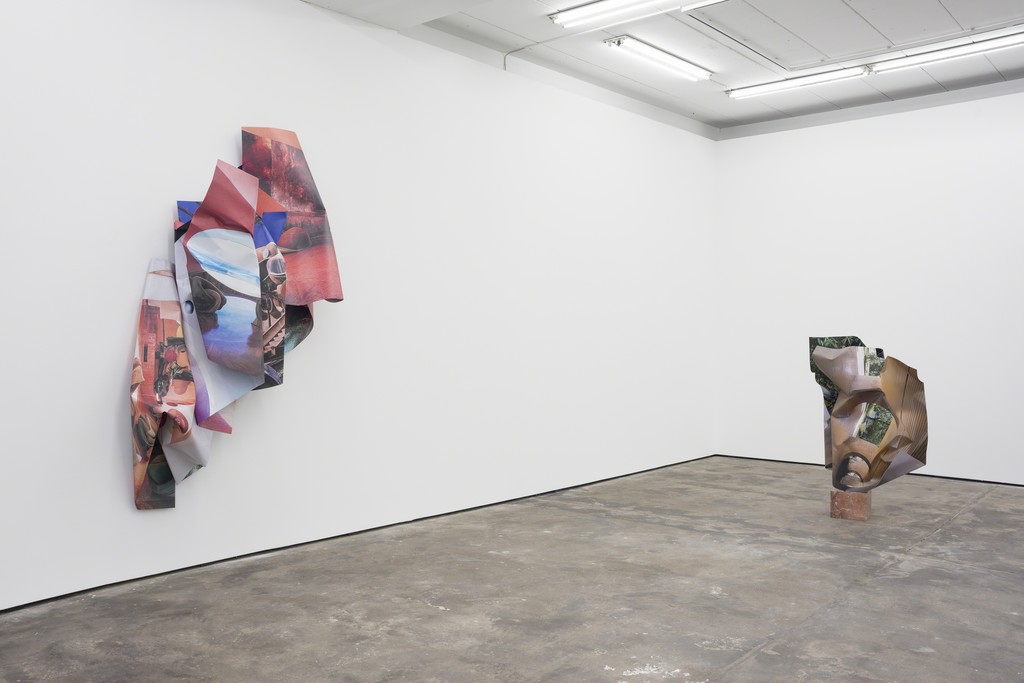 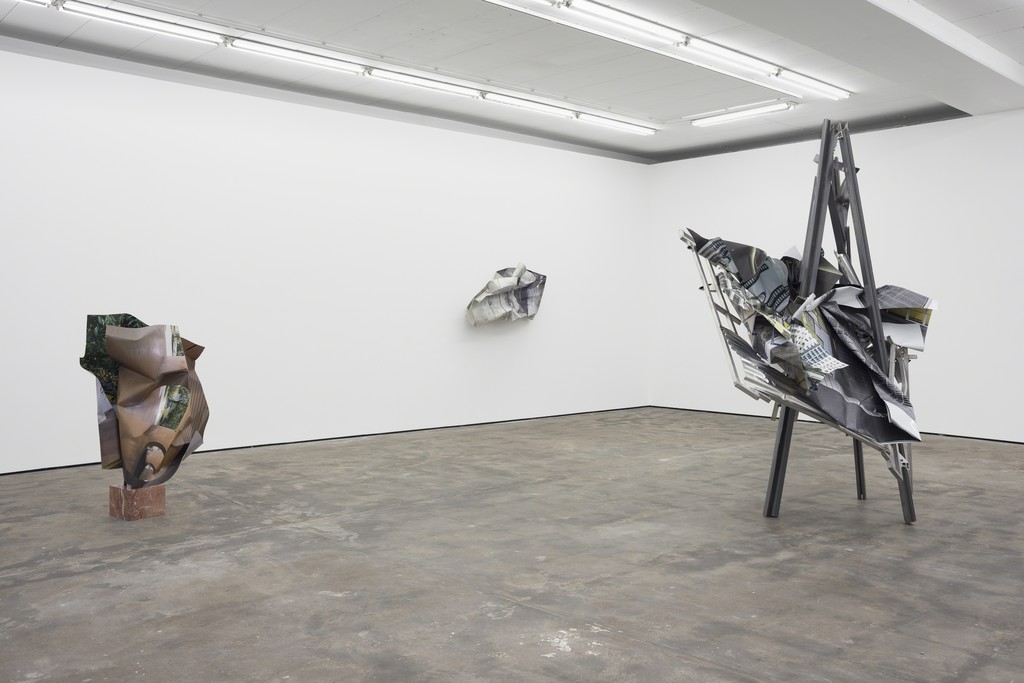 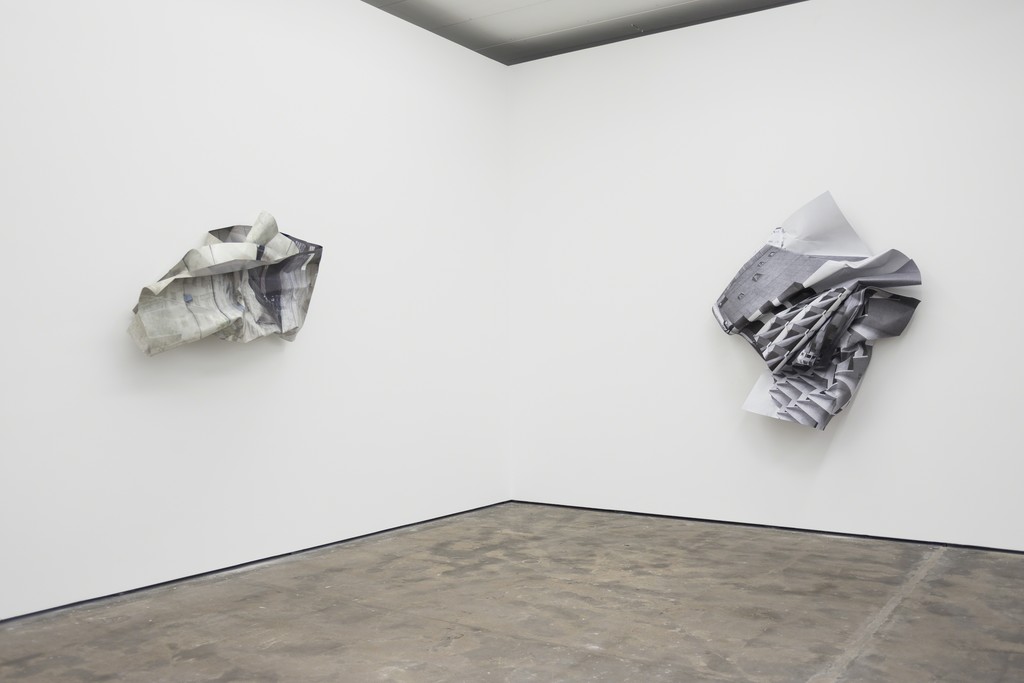 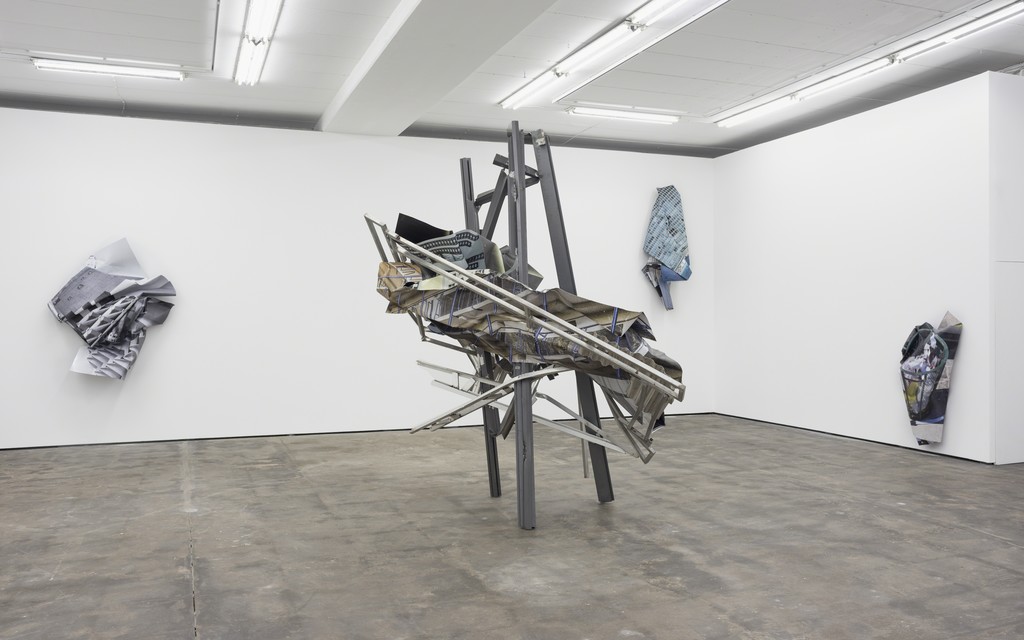 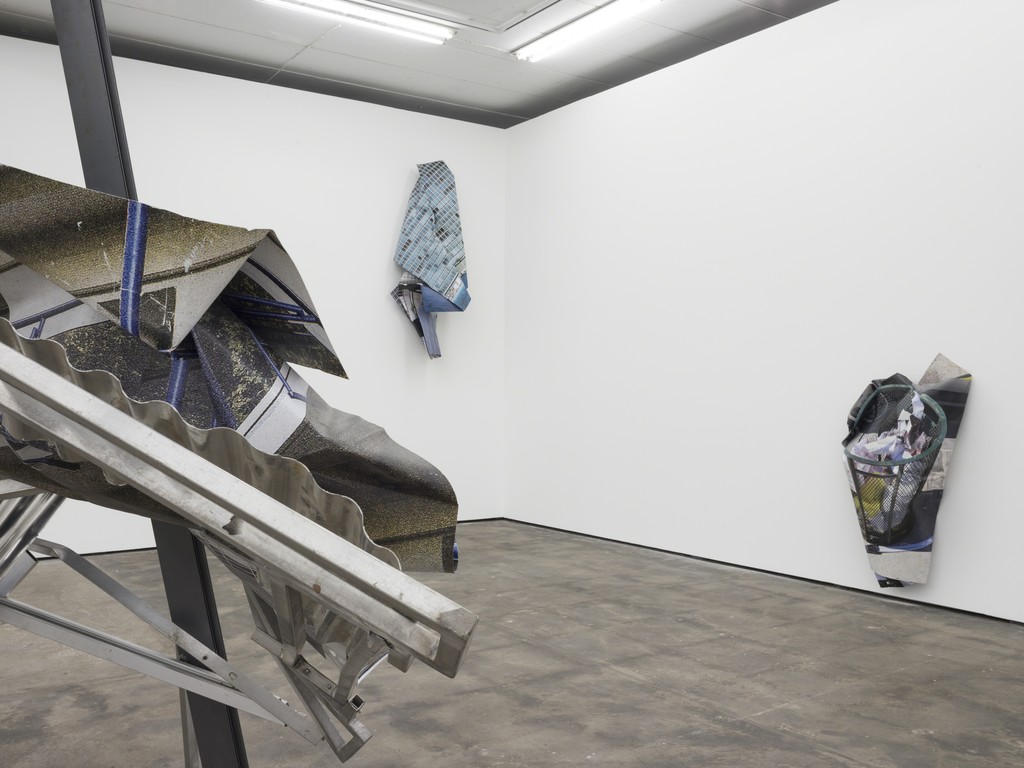 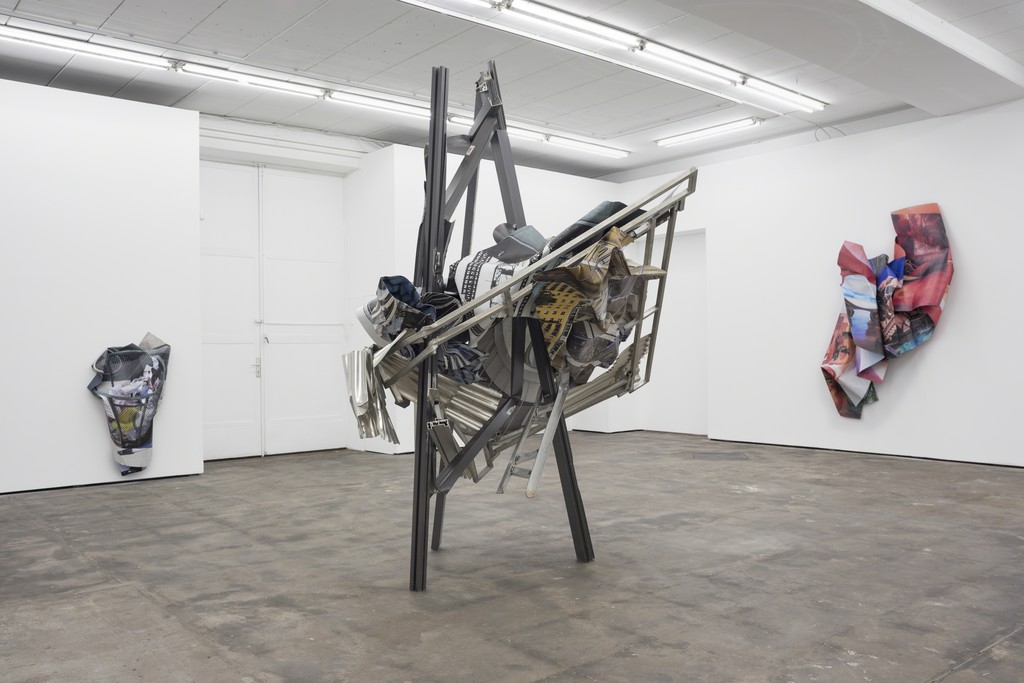 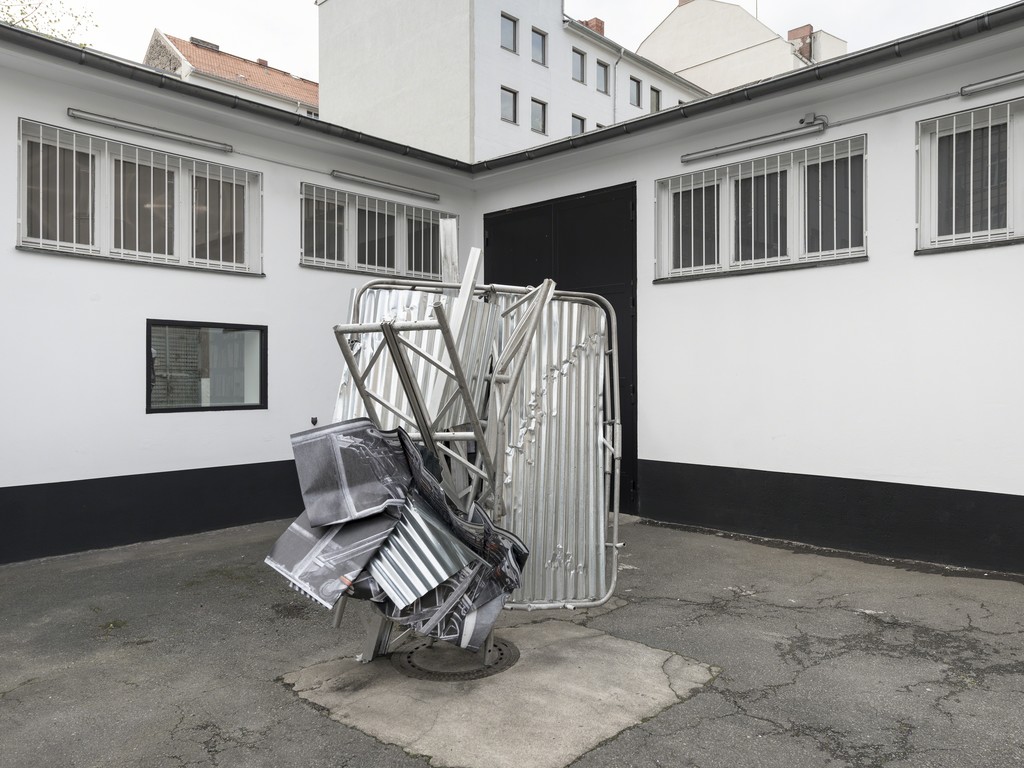 Olaf Metzel’s second solo exhibition in the Wentrup gallery presents new works under the title Plattenbau [prefabricated apartment building usually made of concrete slabs]. For Metzel, the “Platte” (‘pre-fab’; literally: slab) is not only an architectural construction practice and material culture of the former East Bloc, but also a promise of Western postwar Modernist architecture, and similarly it highlights the discrepancy between ideal and reality. If we think of the Grands ensembles in the French banlieues, the Vele di Scampia in Naples or the Gropiusstadt in Berlin, these monuments of utopian Modernism generally stand nowadays as social and architectural historical symbols of urban decay and sociopolitical breakdown. Dilapidation, shattered prospects, cultural decline, criminal networks and social inequalities frequently characterize daily life in these “machines for living”, in which urban life was supposed to manifest itself through density. Although Lafayette Park in Detroit by Ludwig Mies van der Rohe makes use of the same objective formal vocabulary, it serves urban elites as a site of production and blatantly contradicts the egalitarian function and idea of social residential building.
But even when the accents shift, inherent in these critical architectural movements is a systemic overall dogma: to democratize the housing and therefore the lives of human beings. As architecture parlante, the sculptural buildings of the International Style and Brutalism formulate a visionary belief in a new social order and the participation of art in life.
Dealing with society’s problem areas constitutes the focus in the artistic oeuvre of the sculptor Olaf Metzel, who here employs the historical witness of architecture — as interpreted and staged by art history, popular culture and the mass media. The juxtaposition of these different varieties of urban and architectonic Modernity reveals a cross-section of social reality and sustains a dialogue between art and reality, Zeitgeist and current events, ideology and criticism.
Metzel folds, bends and reshapes the iconic images of modern architecture that are printed onto both sides of aluminum plates and translates their material aesthetic into the plastic structures of the freestanding sculptures. The curving contours of red marble in the buildings of Lúcio Costa (2016) one of Brasília’s architects, describe the slow renunciation of strict orthogonality, which undergoes complete dissolution in the organic architecture of Antti Lovag. The Palais Bulles (2016), more inhabitable sculpture than architecture, develops a picturesque character in a collage by Metzel, while Whitney (2016) – showing the museum building by Marcel Breuer – is composed in contrasting perspectives of black and white.
Wentrup | Tempelhofer Ufer 22 | 10963 Berlin | Phone + 49 (0) 30 48493600 | [email protected] | www.wentrupgallery.com
 The lightness suggested through the contrast of form and material evokes a unique aesthetic quality and an irritating tension at these interfaces.
Like a picture within a picture, Metzel layers “Platte” upon plate and piles up these mise en abyme like monuments to bygone utopias in a rugged urban landscape in the exhibition space. The failure of these structures, and the consequences of the “inhospitality of the cities”, is also clarified by the motif of destruction and aggression, which is reflected in the sculptural technique in his works formed against the resistance of the metal. Equivalently, against the backdrop of social flashpoints, critique of existing conditions can often express itself in protest or destructive rage as, for instance, in Kottbusser Tor (2015). The illusion of paper, the absent-minded crumpling up of rejected plans, is generated and ironically crushed in trash can (2016) and formally closes the circle as tautological commentary.
Metzel’s works are temporal documents of a personal description of history sourced from the trove of our collective mediated memories. The artist zaps through the visual archive and fixes ephemeral global images in a kind of synoptic picture book. Within this metatextual structure, Olaf Metzel depicts virulent socio- cultural discourses and, as a seismograph of the societal situation, gives them a form.
Olaf Metzel (born 1952 in Berlin) lives and works in Munich.
Metzel studied at the Freie Universität Berlin and Hochschule der Künste in Berlin. Since 1990 he has been professor at the Akademie der Bildenden Künste in Munich, where he also served as principal 1995-1999. Olaf Metzel, 1952 born in Berlin, studied at the Freie Universität and the Hochschule der Künste in Berlin. Since 1990 he has been professor at the Academy of Fine Arts in Munich, where he also served as principal 1995–1999. He had numerous solo exhibitions in Germany and abroad as well as paticipated amongst others in documenta 8, Kassel (1987); Skulptur Projekte Munster (1987 and 1997), Sydney Bienniual (1990), Istanbul Biennial (1995), and Sao Paulo Biennial (2002). Metzel has been honored, among others, with the Villa Massimo Prize (Rome, 1987), the Arnold Bode Prize (Kassel, 1994), the Wilhelm Loth Prize (Darmstadt, 1997), the Lichtwark Prize (Hamburg, 2010), and the mfi Graduate Award (Essen, 2014). Public sculptures by Metzel can be seen in Germany, Europe, and Asia. He has curated many exhibitions and published numerous contributions in newspapers and magazines. He is author as well as editor of the publications Basisarbeit, Rote Zelle, and Circus Wols,
Works by Olaf Metzel are represented in numerous museums and collections: Museum Ludwig, Cologne; Kunstsammlung NRW, Düsseldorf; Hamburger Kunsthalle; Pinakothek der Moderne, Munich; Lenbachhaus, Munich; Neues Museum Nürnberg; Kunsthalle Bremen; Staatliche Museen zu Berlin – Preußischer Kulturbesitz (Kupferstichkabinett); Staatsgalerie Stuttgart; Sammlung Deutsche Bank, Frankfurt; Munich Re Art Collection, Munich; ZKM, Karlsruhe; Sammlung Falckenberg, Hamburg; Sammlung René Block, Berlin; Böckmann Collection, Berlin; Sammlung Hollweg, Bremen; Collezione Sandretto Re Rebaudengo, Turin; Vehbi Koç Foundation, Istanbul; The Margulies Collection, Miami, etc.