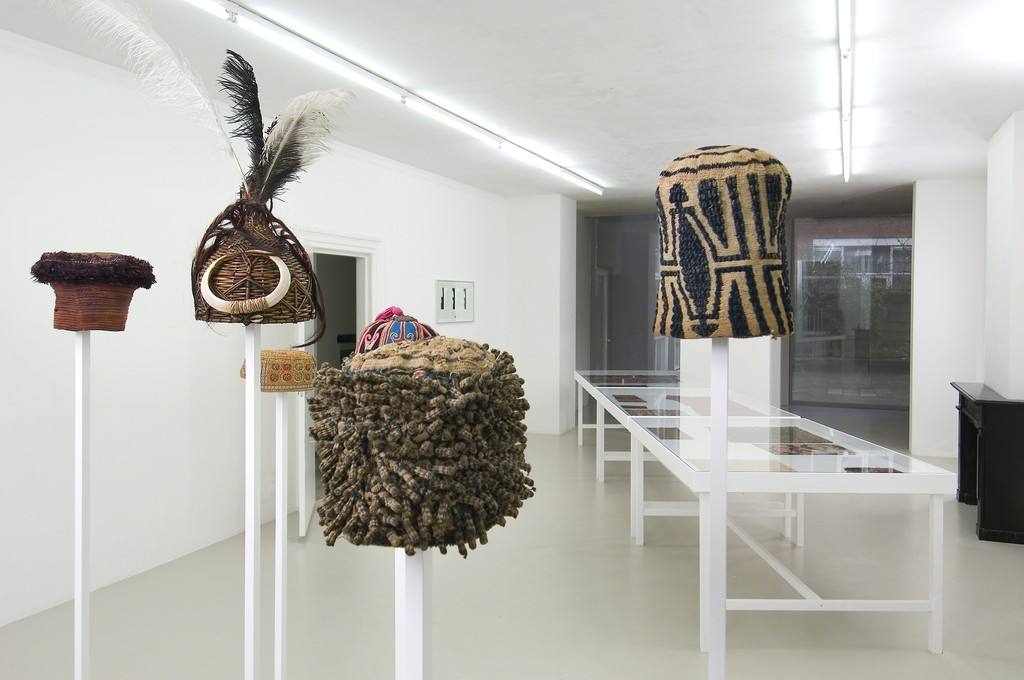 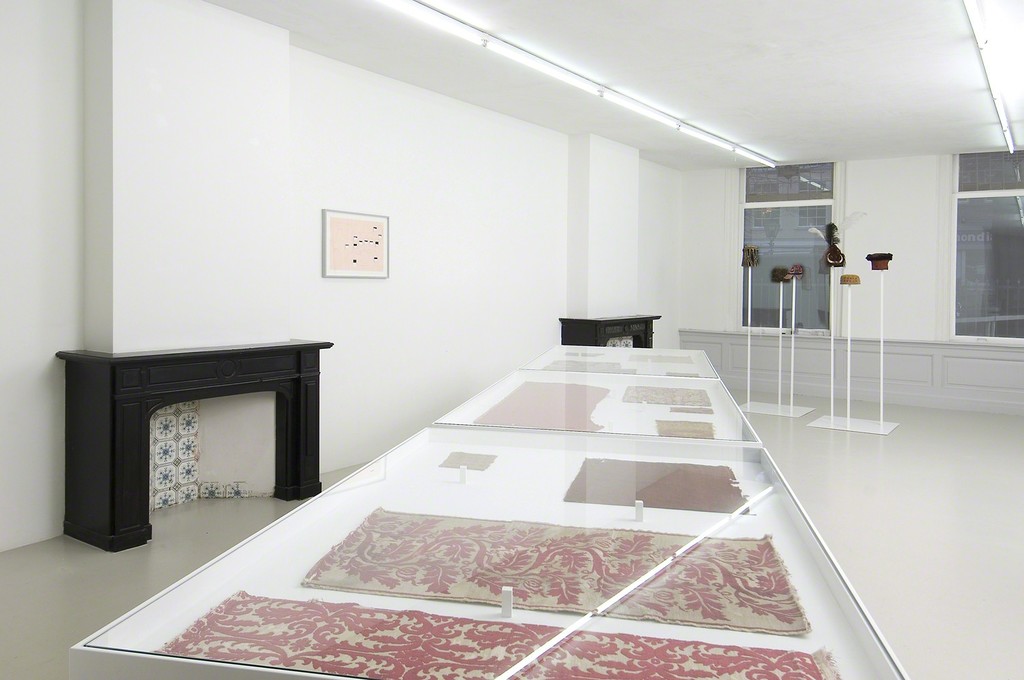 Installation view: textiles from the collection of Seth Siegelaub, courtesy of Stichting Egress Foundation Amsterdam, and KP Brehmer, Flags For The States 1867/1868, 1976, courtesy of Vilma Gold London (photography by Jhoeko). 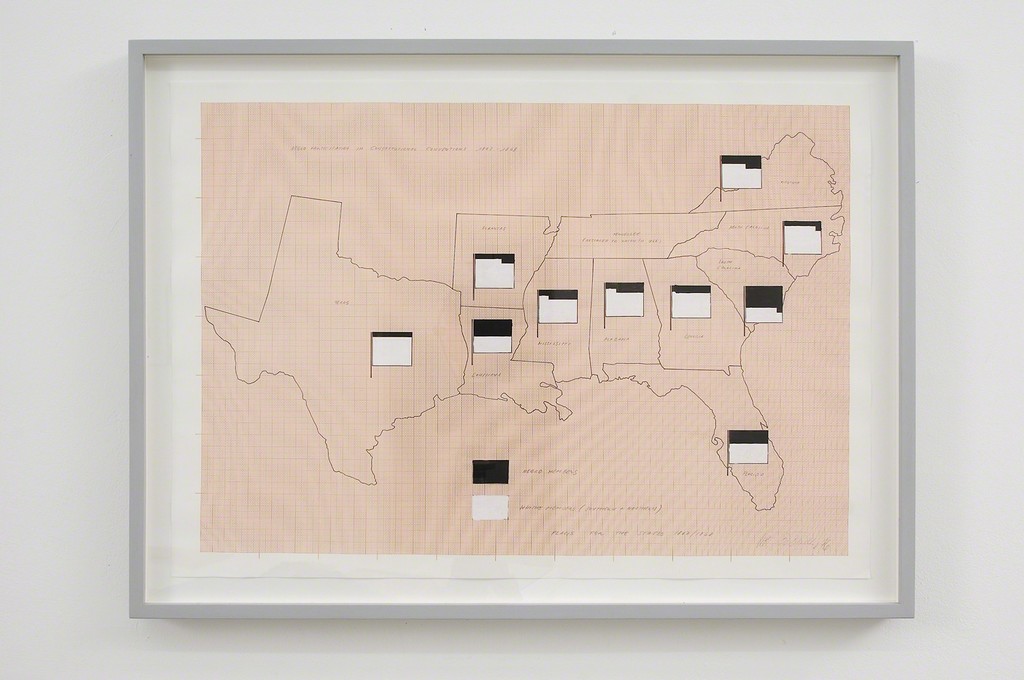 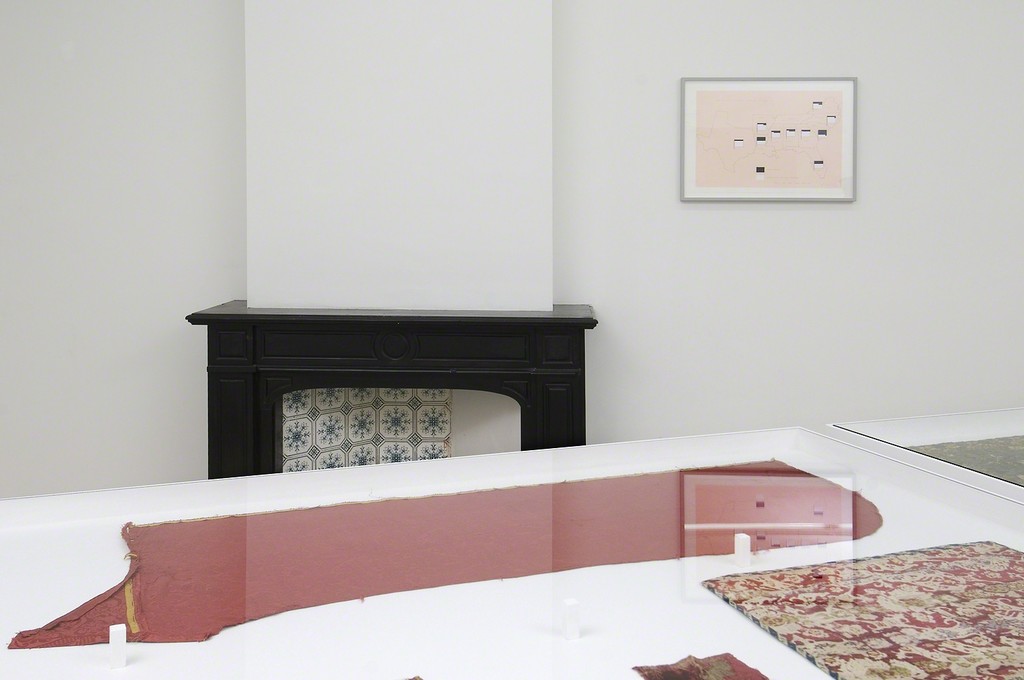 Installation view: KP Brehmer, Flags for the states 1867/1868, 1976, courtesy of Vilma Gold London and textiles from the collection of Seth Siegelaub, courtesy of Stichting Egress Foundation Amsterdam. (photography by Jhoeko) 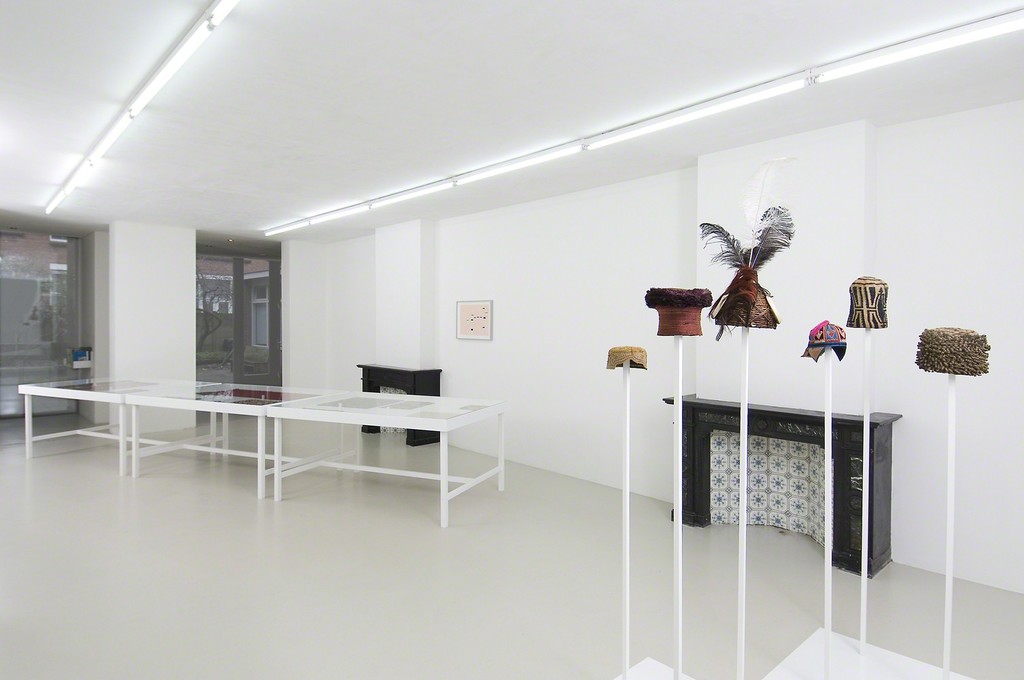 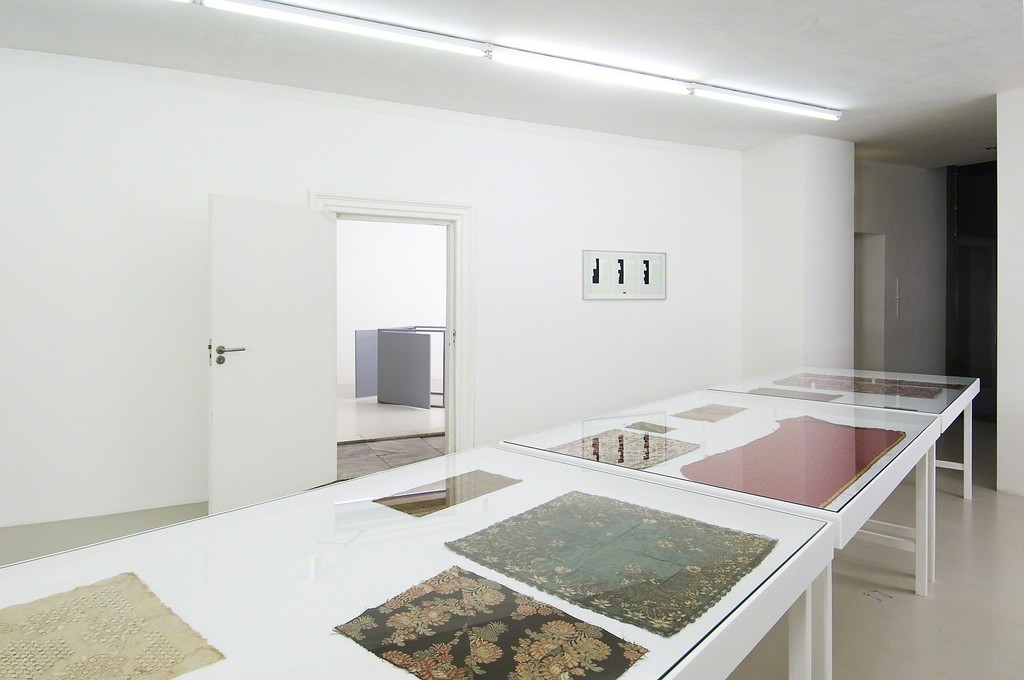 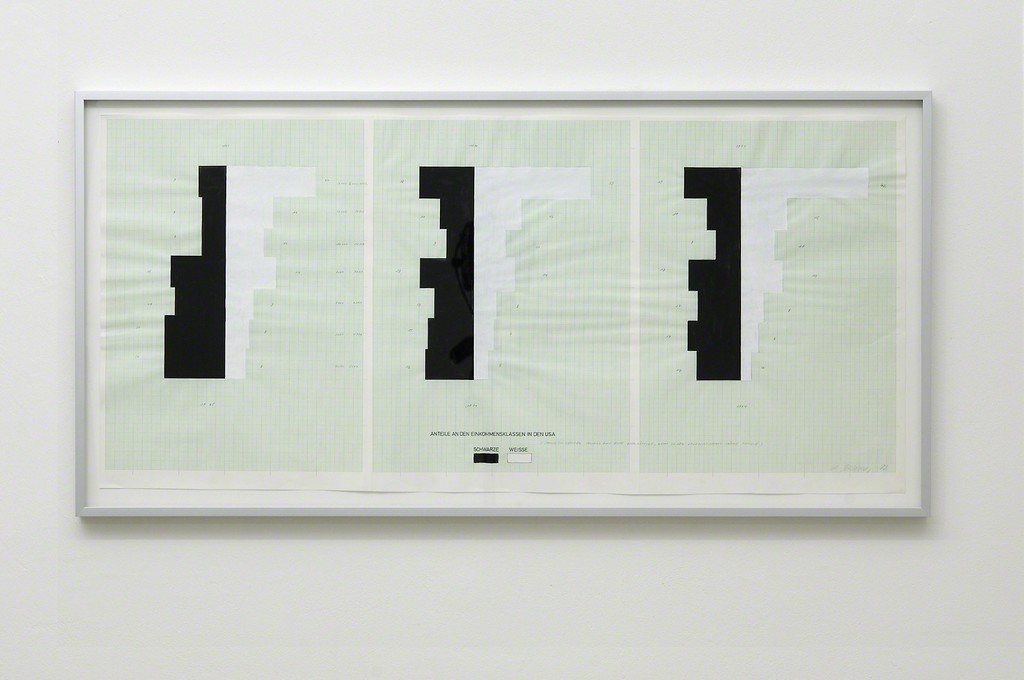 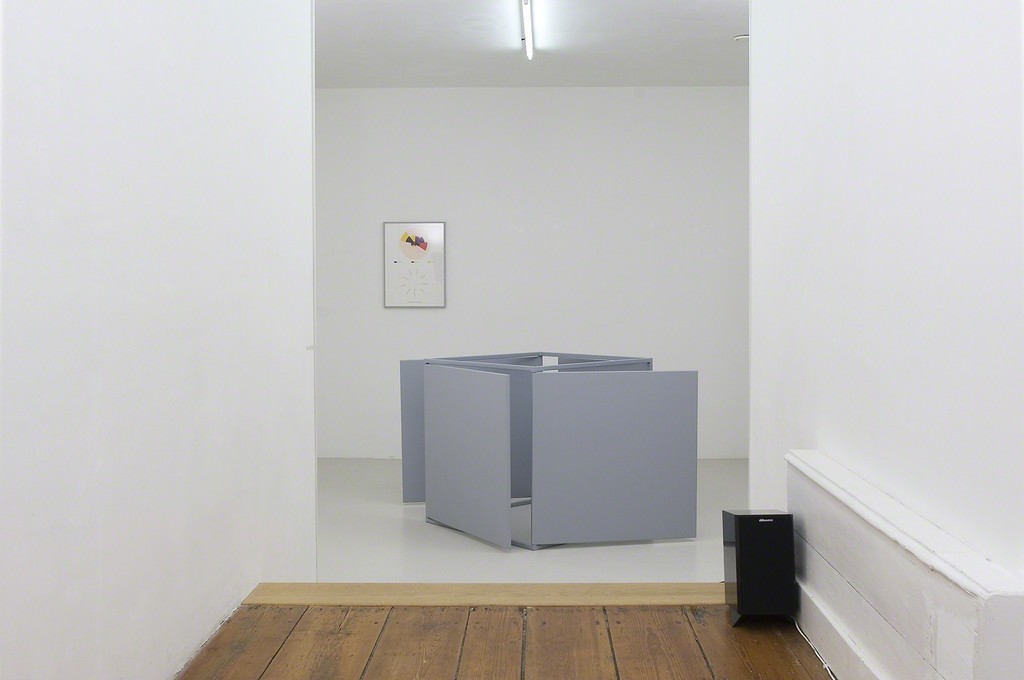 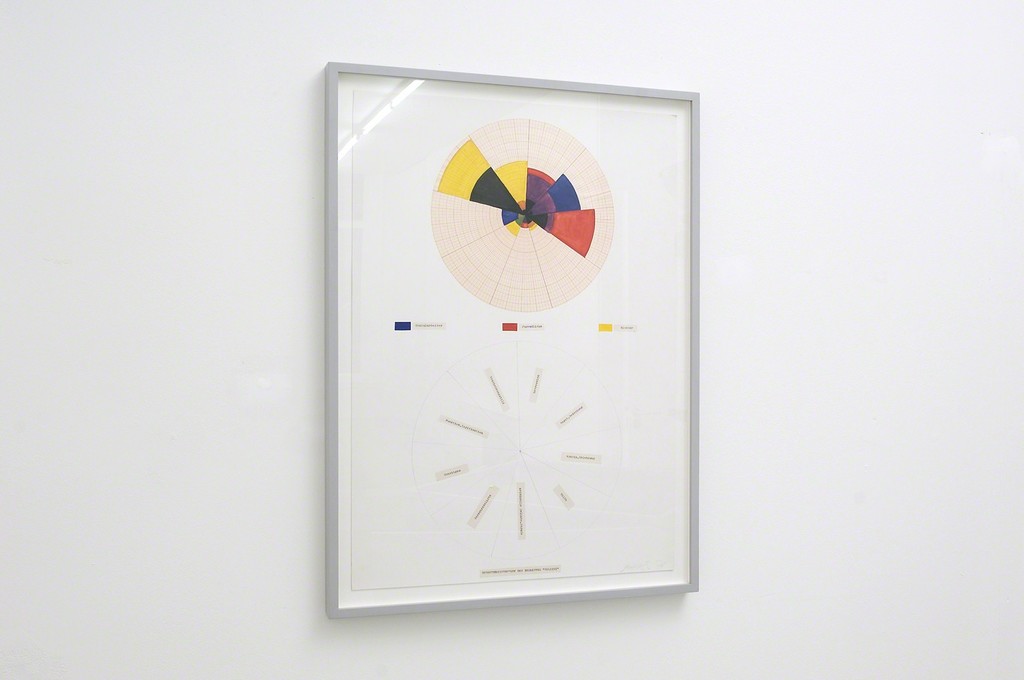 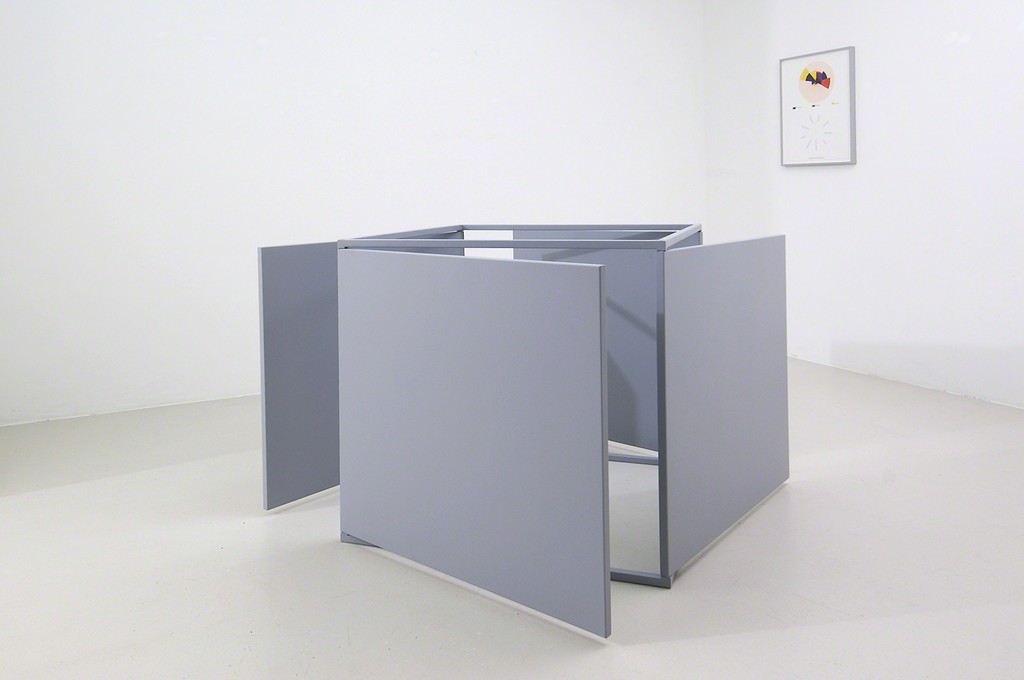 Distributors takes on multiple forms of address: an exhibition, a roundtable, and a booklet that gathers works that challenge systems of distribution in relation to production. Brought together by the Dutch artist Remco Torenbosch, Distributors takes a perspective on the flow of material and the precarity of the subject. As a whole these forms becomes self-reflexive by questioning how the dissociation of capital differs from (art)production as realized in an abstracted globalized economy.

The exhibited artists critically probe their own role and means of producing their work. At the same time, they are actively seeking out and entering into systems of distribution in order to make visible and fundamentally reroute new possibilities for artistic production and engagement. From West Berlin, KP Brehmer utilized capitalistic tools such as schematics and diagrams, becoming a key figure in the formalization of economic and social abstraction. Set alongside Brehmer is a reconstruction of the revolutionary revolving vane sculpture by Charlotte Posenenske from 1967. Before leaving behind her practice, Posenenske made a fundamental shift in artistic production by inserting and embodying her social-political questions.

The open invitation to collaborate is apparent in Distributors. In the practice of Hannah Weinberger, her sound pieces are developed with others to reassess and propose alternative hierarchies. In contrast activist Fred Lonidier pushes the limits of political photography and imagery where he makes explicit the state in which his images of labor, production, and protest are formed. Similarly Wendelien van Oldenborgh lays bare the conditions of production with her open filmmaking process by working together with a variety of voices and participants creation her practise. Tracing social-economic history of textiles connects Van Oldenborgh’s film ‘La Javanaise’ to a selection from Seth Siegelaub’s impressive textile collection is on display. The ancient silk presented in the exhibition focuses on the historical role of such textiles in global distribution, trade and value production.

Forming a flow of information on material and value, and labor, Distributors questions it own conceptual and surplus value, autonomy, and contribution to the production of knowledge. Working as a parallel system, a public roundtable opens up themes of distribution, value, labour as well as historical and present conceptual art production found in the exhibition. Moderated by Natasha Hoare, the roundtable is held on Tuesday 8 December 2015 with Marja Bloem, Willem de Rooij, and Sven Augustijnen. A new publication, with an essay of E. C. Feiss, will accompany the exhibition.

Exhibition
KP Brehmer (DE, 1938 – 1997) used his early training in graphic art and painting to rally against the capitalistic art market. He changed his artist name to KP from Klaus Peter upon the banning of the Deutsche Kommunistische Partei in West Germany, of which he was a sympathizer. Brehmer’s work has recently been exhibited at Raven Row, London; Tate Liverpool, Liverpool; Schirn Kunsthalle, Frankfurt; and Whitechapel Gallery, London.

Fred Lonidier (US, 1942) emerged at the end of 1960s with artists such as Allan Sekula and Martha Rosler. Through his engagement in demonstrations and activist organizations, he furthered the nexus between art and social practice. His work has recently been exhibited at Swiss Institute, Rome; Museo Nacional Centro de Arte Reina Sofía, Madrid; Museum of American Art, New York City; and Palais de Tokyo, Paris.

Wendelien van Oldenborgh (NL, 1962) is based in Rotterdam and her practice explores social relations through an investigation of gesture in the public sphere. She often uses the format of a public film shoot, collaborating with participants in different scenarios, to co-produce a script and orientate the work towards its final outcome, which can be film, or other forms of projection. Her work has recently been exhibited at Showroom, London; Van Abbemuseum, Eindhoven; Generali Foundation, Vienna, Stedelijk Museum, Amsterdam; Museum Sztuki, Łódz; and Tranzit, Budapest.

Charlotte Posenenske (DE, 1930 –1985) sought to incorporate the political aspirations of the 1968 movement to bring about change in society. It was in this year that she found the limitations of art’s ability to enter into politics and make a profound and lasting effect. As such, she sought out a new path by giving away her practice to become a social worker. Her work has recently been exhibited at M HKA, Antwerp; K21, Dusseldorf; Artists Space New York; Art Basel; Pavillon de L’Arsenal, Paris; The Chinati Foundation, Marfa; and MMK 2, Museum für Moderne Kunst, Frankfurt Am Main.

Seth Siegelaub (US, 1941 – 2013) ran his own New York gallery from 1964 to 1966, through which he became a critical key to development of conceptual art. After giving up the gallery, he experimented with the exhibition format resulting in 21 exhibitions that changed artistic production and reception dramatically. In the early eighties, he began collecting books about textiles, later expanding into textiles themselves, and in 1986 founded the Center for Social Research on Old Textiles. In the late nineties, he compiled the first general bibliography on the history of textiles ‘Bibliographica Textilia Historiae’, which to date exceeds 9,000 entries online. To bring together his varied range of projects: contemporary art, textile history, and time and causality research, Siegelaub instituted the Stichting Egress Foundation in Amsterdam in the early 2000s.

Roundtable
Marja Bloem (NL, 1944) is an independent curator, frequently writing on contemporary art. From 1971 to 2007, she worked at the Stedelijk Museum Amsterdam as Curator for Exhibitions, where she was responsible for organizing innumerable important group and solo exhibitions including by Agnes Martin, Kazimir Malevich, Lawrence Weiner, Richard Tuttle, Gerhard Richter, and Colin McCahon. Marja Bloem is the partner of Seth Siegelaub and looks after his estate as director of Stichting Egress Foundation, Amsterdam.

Willem de Rooij’s (NL, 1969) work is determined by the selection and combination of images in diverse media, such as sculpture, film, photography and text. He analyzes the conventions of (re)presentation and assesses the tension between socio-political and autonomous image production. Recent solo exhibitions include Le Consortium, Dijon; The Jewish Museum, New York; and Weltkulturen Museum, Frankfurt.

Natasha Hoare (GB, 1984) is Associate Curator at Witte de With Center for Contemporary Art, working on Curating Now, a book of interviews with international curators, and regular contributor to Ibraaz, Elephant Magazine, and Saatchi publications. Prior to joining Witte de With, she worked as Assistant Curator for the Visual Arts Section of the Marrakech Biennale 5 and for On Geometry and Speculation, a parallel project for the Marrakech Biennale 4.

Publication
E. C. Feiss (US, 1986) is a writer with work appearing in Afterall, Open!, Texte zur Kunst, and Radical Philosophy, among others. Recent and current projects include: participation in Re-Materializing Feminism, ICA London and The Politics of Attachment, ASCA (Amsterdam School of Cultural Analysis).

Curator
Remco Torenbosch (NL, 1982) is an artist based in Amsterdam. His practice focuses on the historical and contemporary abstract relationships between socio-economics, trade, and labour. In this realm, he questions the conventions of presentation, representation, and appropriation by means of autonomous image production. Recent shows include Kunsthalle Wien; Kunsthaus Zürich; GAMeC – Museum for Modern and Contemporary Art, Bergamo; De Vleeshal, Middelburg; and De Appel Arts Centre Amsterdam.