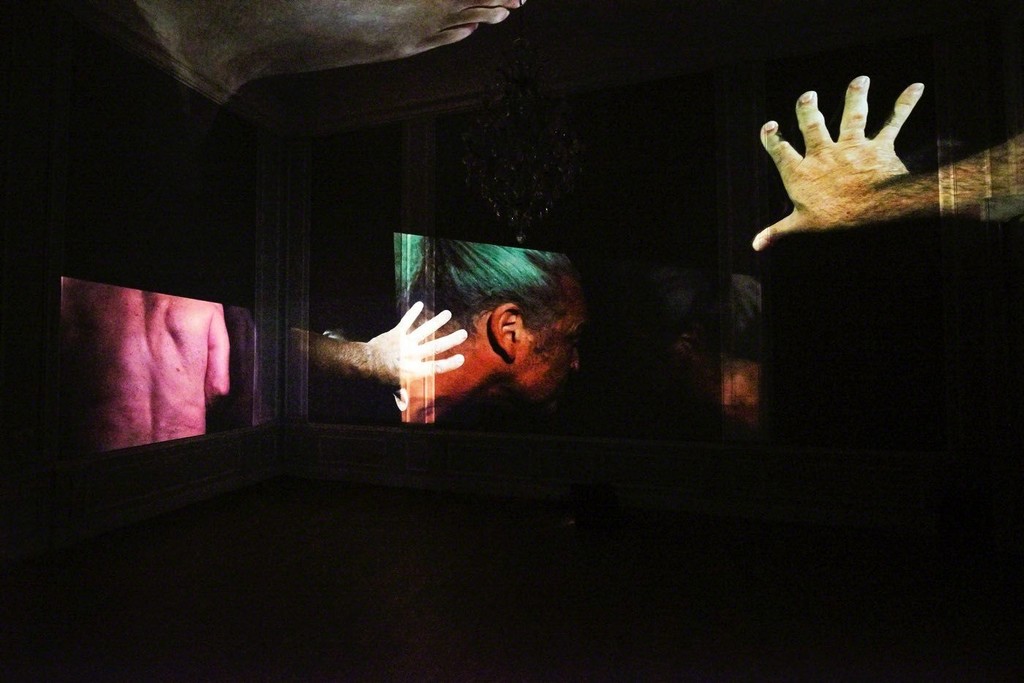 Gary Hill, Up against Down, Video/sound installation (six-channel version), 2008 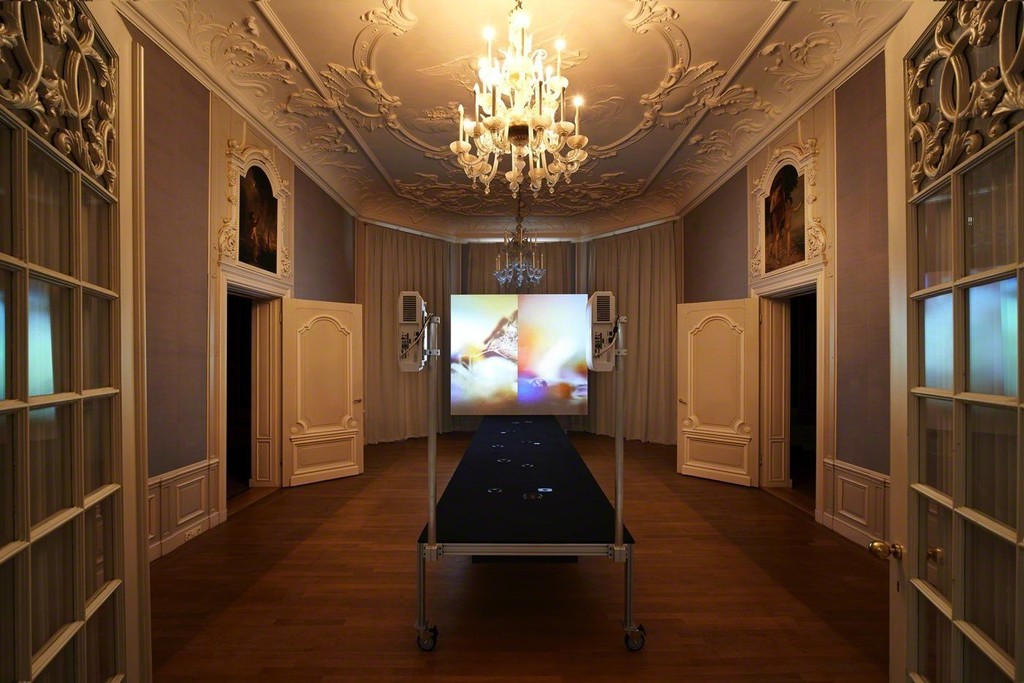 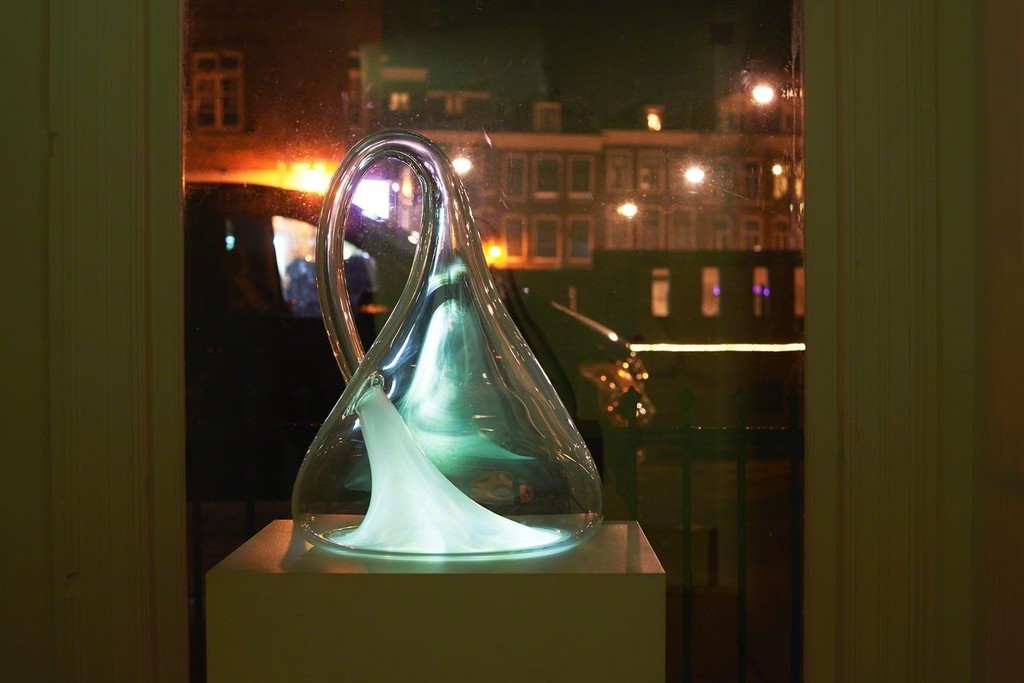 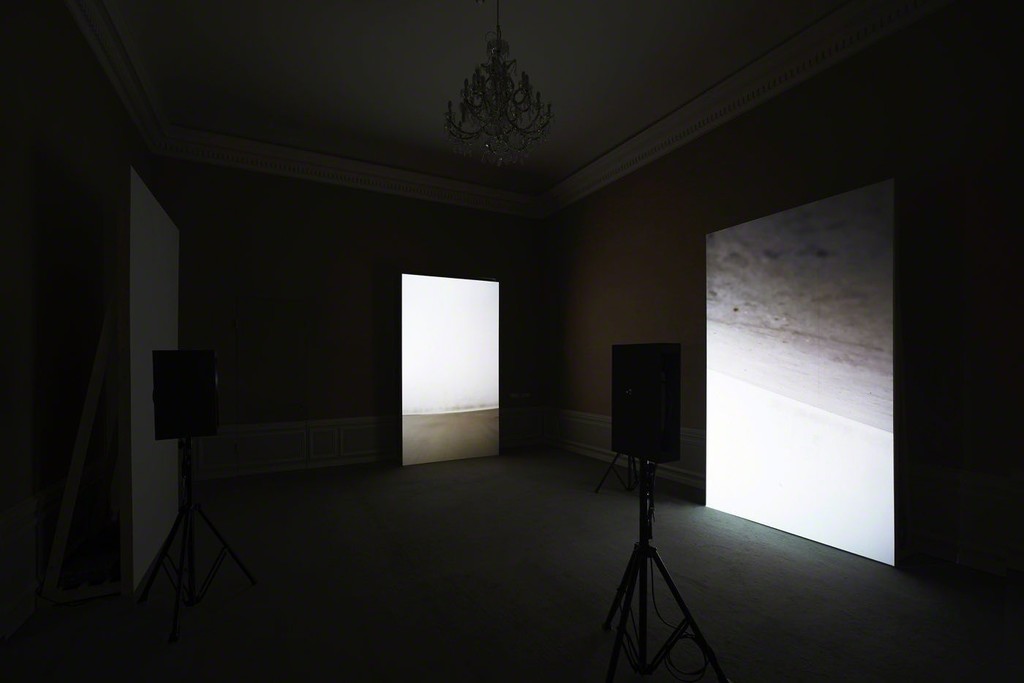 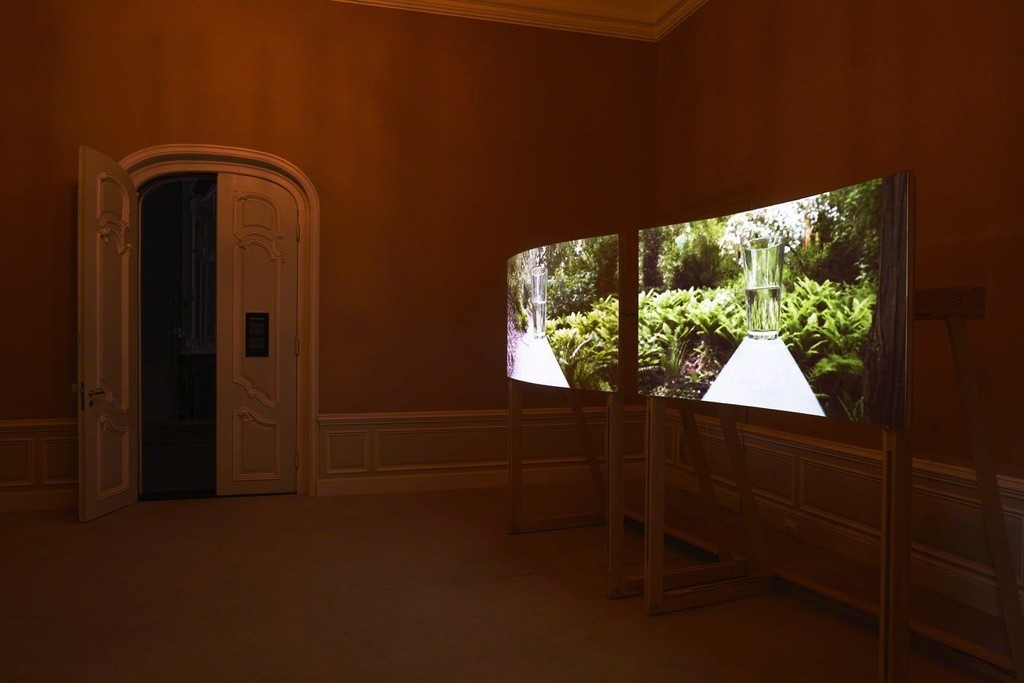 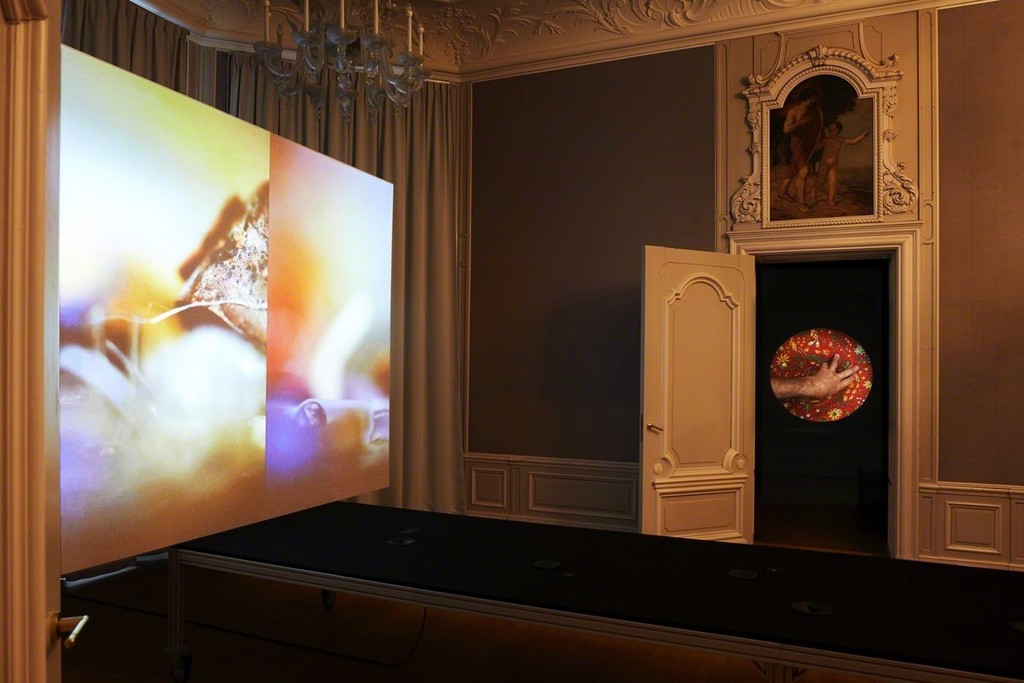 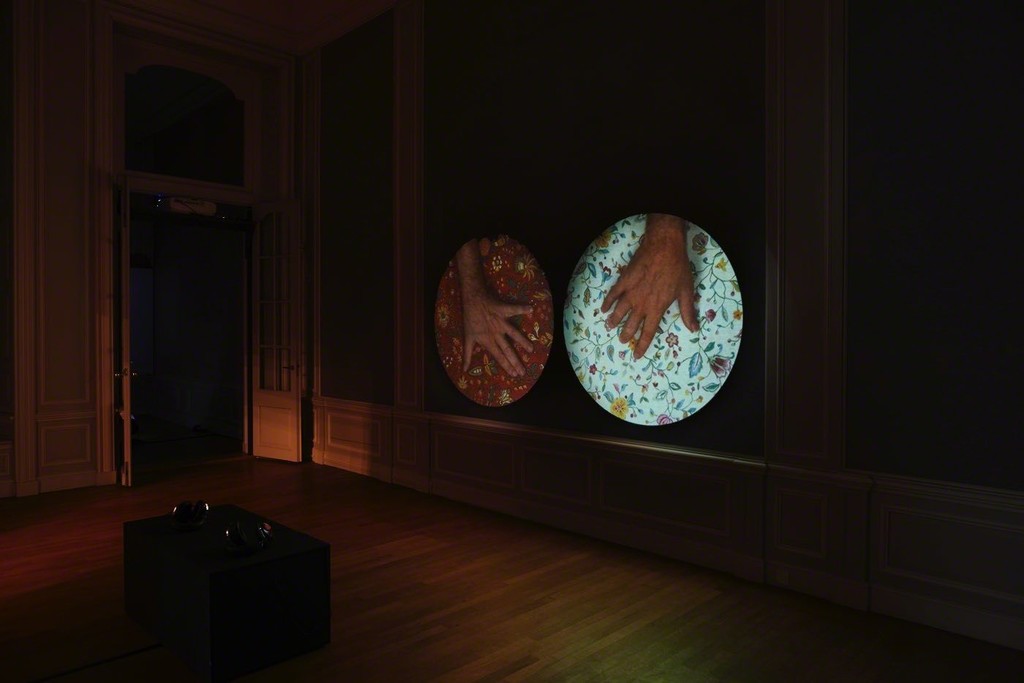 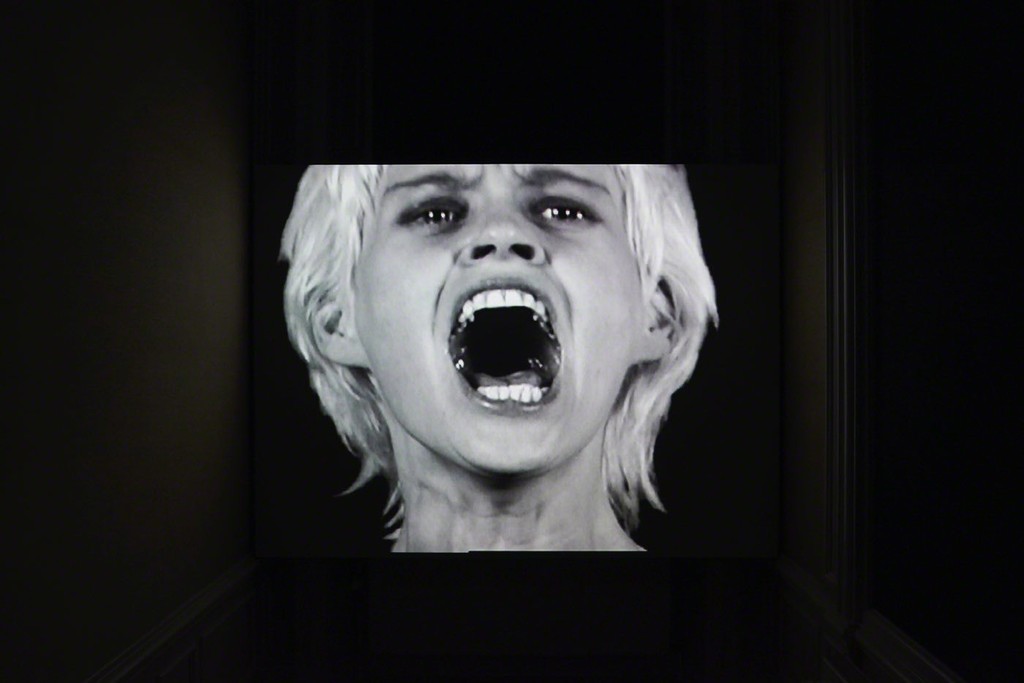 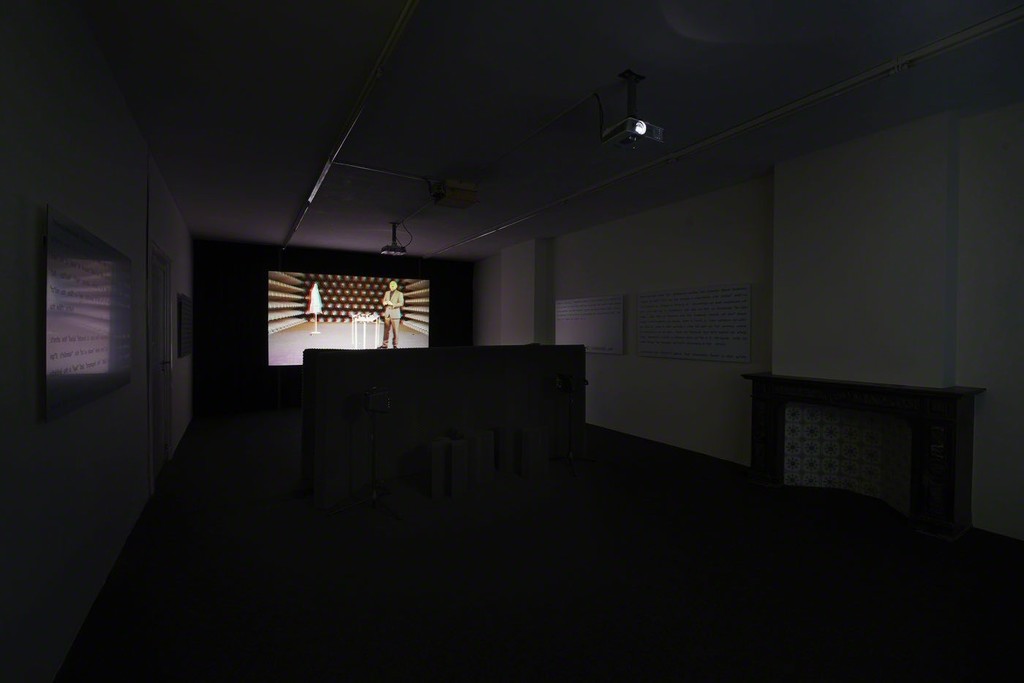 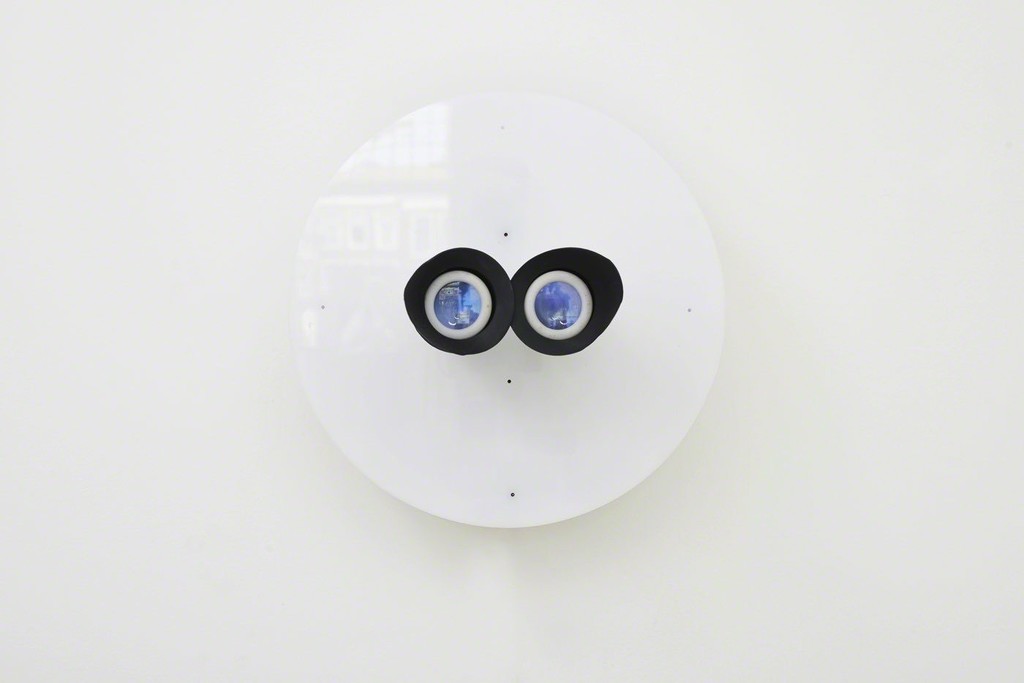 West is proud to present the first solo exhibition in The Netherlands since 25 years. The exhibition is preceded by the marathon interview '24 Hours with Gary Hill' during Art Week Rotterdam.

In a number of works, such as ‘Wall piece’ and ‘Up Against Down’, Gary Hill uses his own body to bring to the fore a corporeal relationship with language, sound, and the limits of space. In the case of ‘The Psychedelic Gedankenexperiment’, he challenges the very definition and ontology of art itself. ‘Painting with Two Balls (after Jasper Johns)’ and ‘Klein Bottle with the Image of Its Own Making (after Robert Morris)’ are homages to two well-known works of modern art in which he utilizes electronic media to make playful parallel creations. With the ‘Self ( ) series’, Hill critiques the ‘selfie’ social media trope with closed-circuit cameras mounted to progressively more complex geometrical wall hangings. In each ‘Self ( )’, cameras feed the viewers images of themselves (looking at themselves) that include all but their faces. As this particular cross-section of work makes clear, Hill’s oeuvre is, at its core, conceptually driven by language in all its manifestations.

Long known for his unique combination of video, sound, performance and installation, Hill has continuously offered multilayered investigations into the phenomenological nature of how we perceive the world through a network of visual, aural and linguistic signals. Exploring the cognitive and sensorial conditions that underlie our discursive modes of communication, Hill experiments with the material and sonic properties of language to offer provocative meditations upon the production of meaning within our everyday contexts, as well as highly personal poetic spaces. His works are characterized by their experimental rigor, imaginative leaps, and conceptual precision. What differentiates his practice from the solely theory-driven is a visceral necessity that is almost palpable. Since the early 1970s, Hill’s use of video, and by extension electronic media, has occupied a central role in his artistic practice, using the medium as a formal site and structure to both examine and destabilize the power of the image. Concerned with an increasingly homogenized visual culture, Hill disarticulates the primary communicative function of electronic media by playing with sound, speed, sequence and light, to produce not only radical ruptures within our normative processes of perception, but new ways of encountering meaning—whether it be grappling with, accumulating, absorbing or surrendering to it.

Gary Hill was born in 1951 in Santa Monica, California, and currently lives and works in Seattle. Originally a sculptor, he began working with sound and video in the early 1970s and has since produced a large body of both single-channel video works and mixed-media installations. The thresholds between language and image, silence and sound, and lightness and darkness are of primary concern in much of Hill’s work, but rather than emerging as sets of dualities, these thresholds — as well as the gaps between absence and presence, real and recorded time, viewed and viewing — are described by Hill as “resonating membranes” through which he and the viewers become “next to close by.”

From Friday 9 February 8 PM until Saturday 10 February 8 PM, Gary Hill will engage in conversation with twelve professionals from the international world of art: Alex Adriaansens, Catherine David, Lars Henrik Gass, Krist Gruijthuijsen, Gerard Hadders, Hans den Hartog Jager, Gert Hoogeveen, Jacinto Lageira, Philip Peters, Sandra Smets, Benjamin Weil and Mickey Yang. The dialogues will not only differ from each other because every interviewer will have his own approach, but also because it will be a very special testing for the artist to talk about his work for such an exceptionally long time. ‘24 Hours with Gary Hill’ will form the prelude to the exhibition and will take place in Arminius, Museumpark 3 in Rotterdam during the Art Rotterdam Week. Watch the interview here: http://westdenhaag.nl/films/Gary_Hill

Gary Hill (1951) has received numerous fellowships and awards, most notably the Leone d'Oro Prize for Sculpture at the Venice Biennale (1995), the prestigious McArthur Foundation Fellowship (1998), the Kurt- Schwiters-Preis 2000, the Strangers genius award (2011) and Honorary Degrees from The Academy of Fine Arts Poznan, Poland (2005) and Cornish College of the Arts (2011).