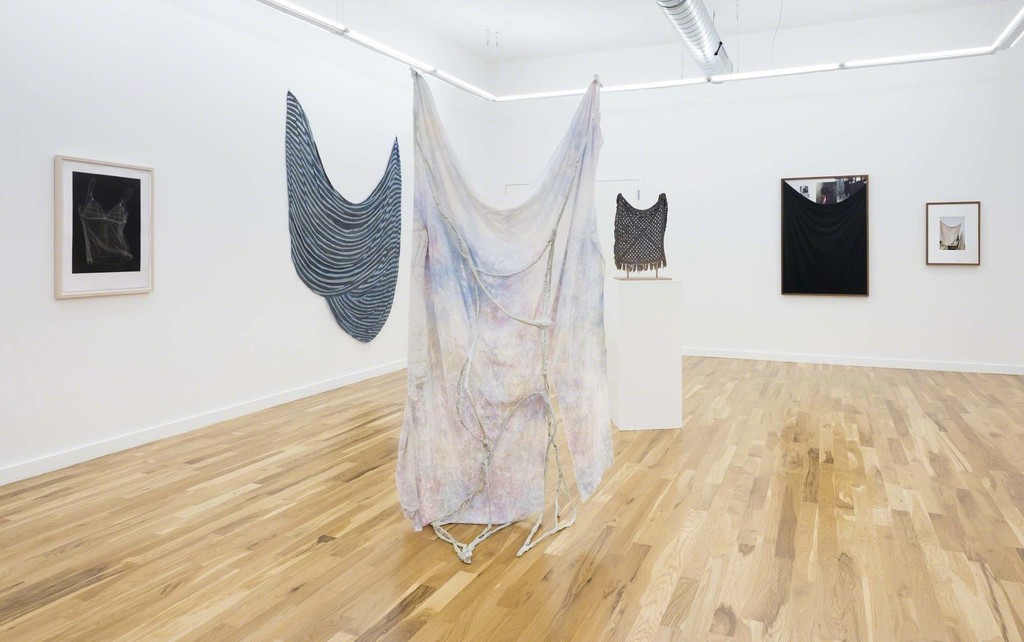 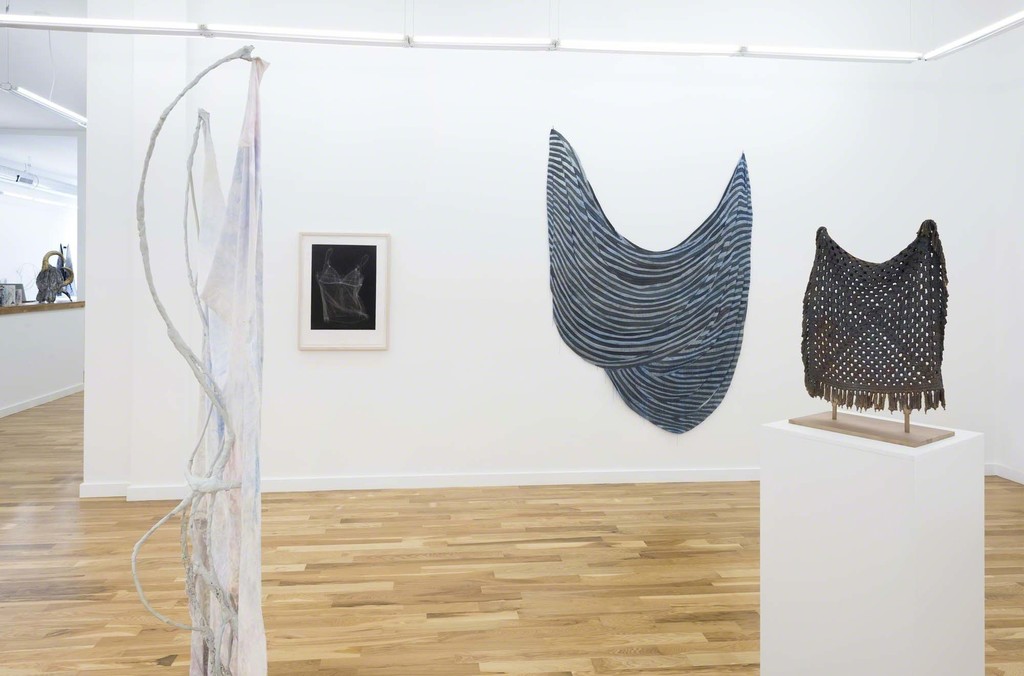 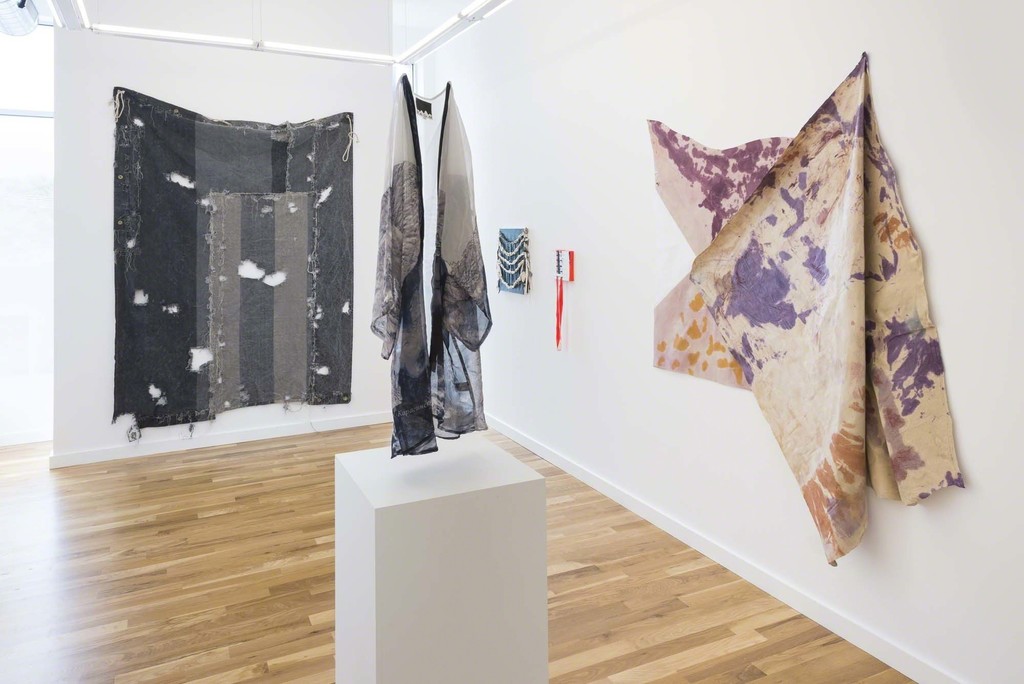 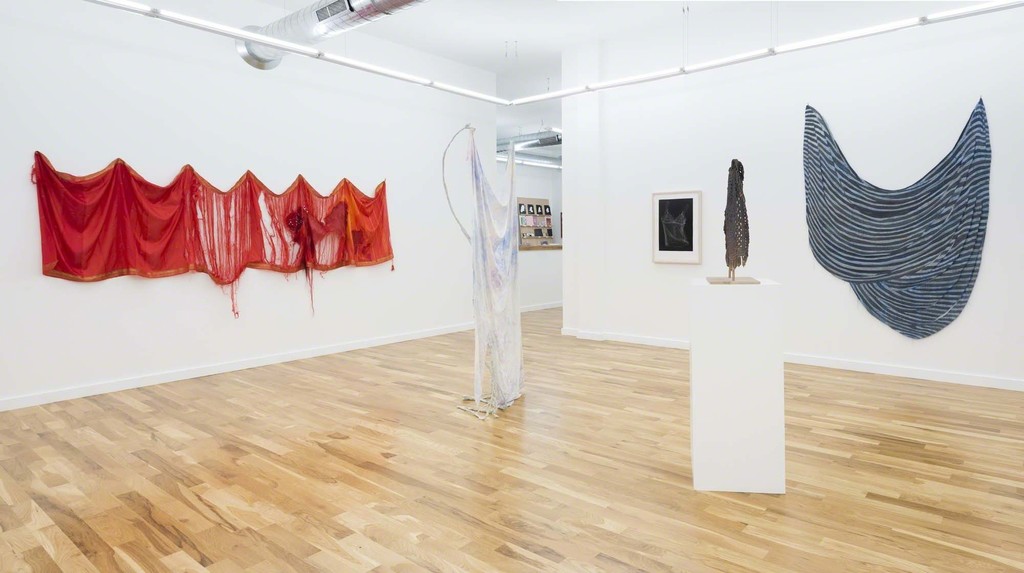 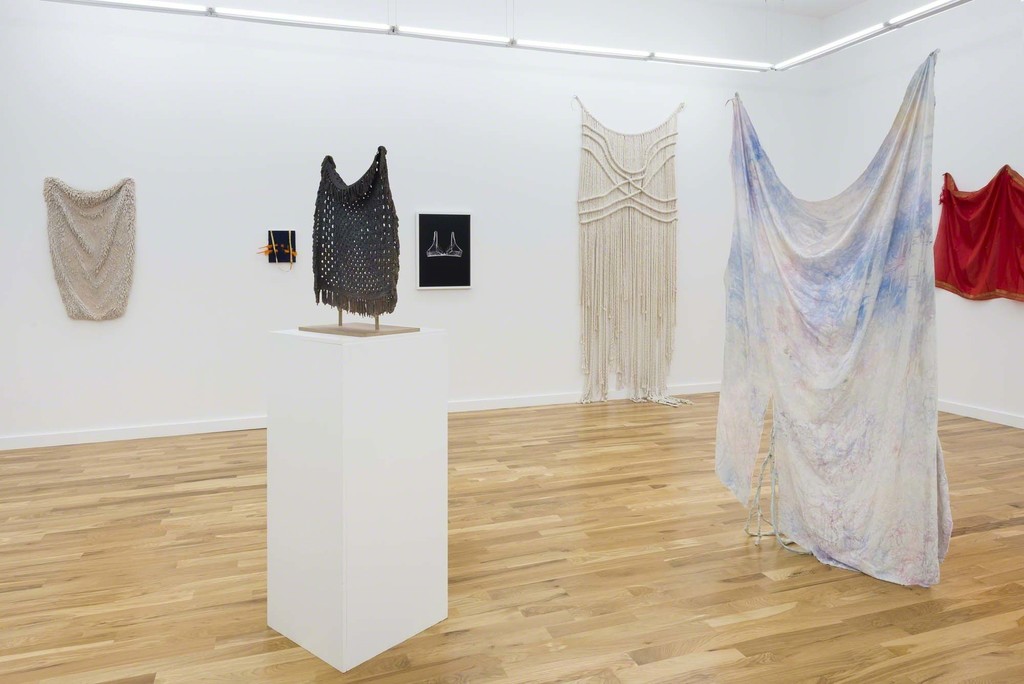 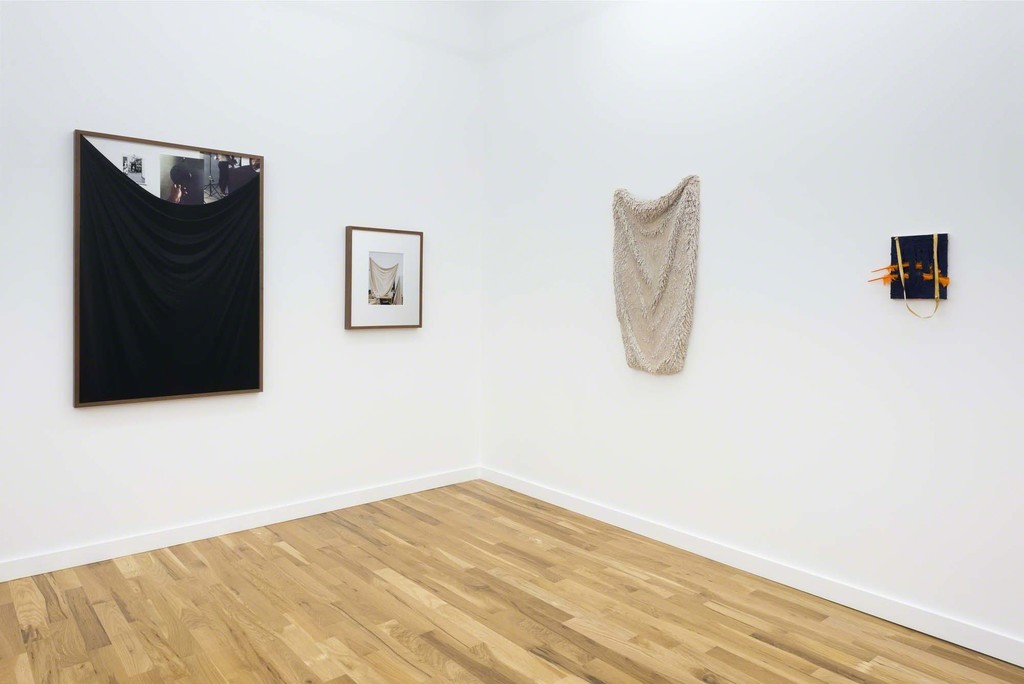 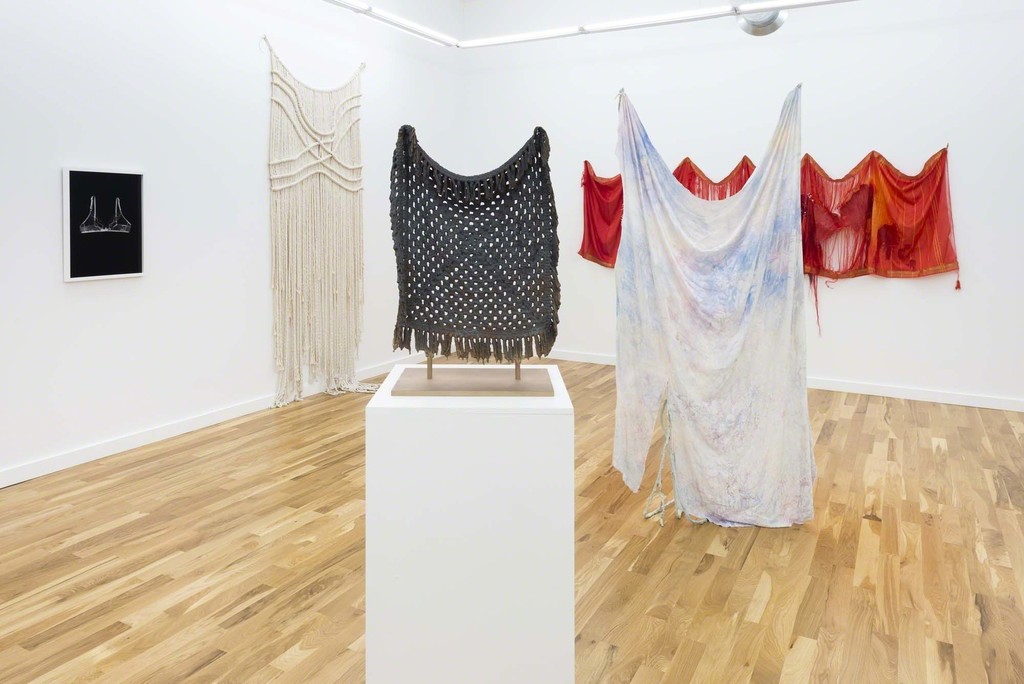 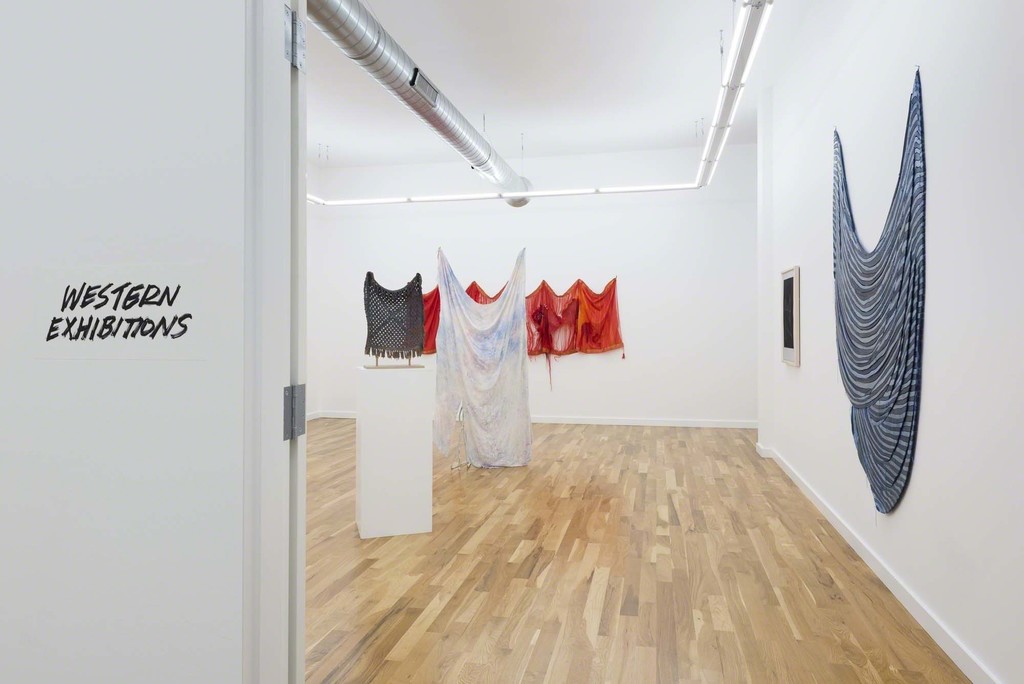 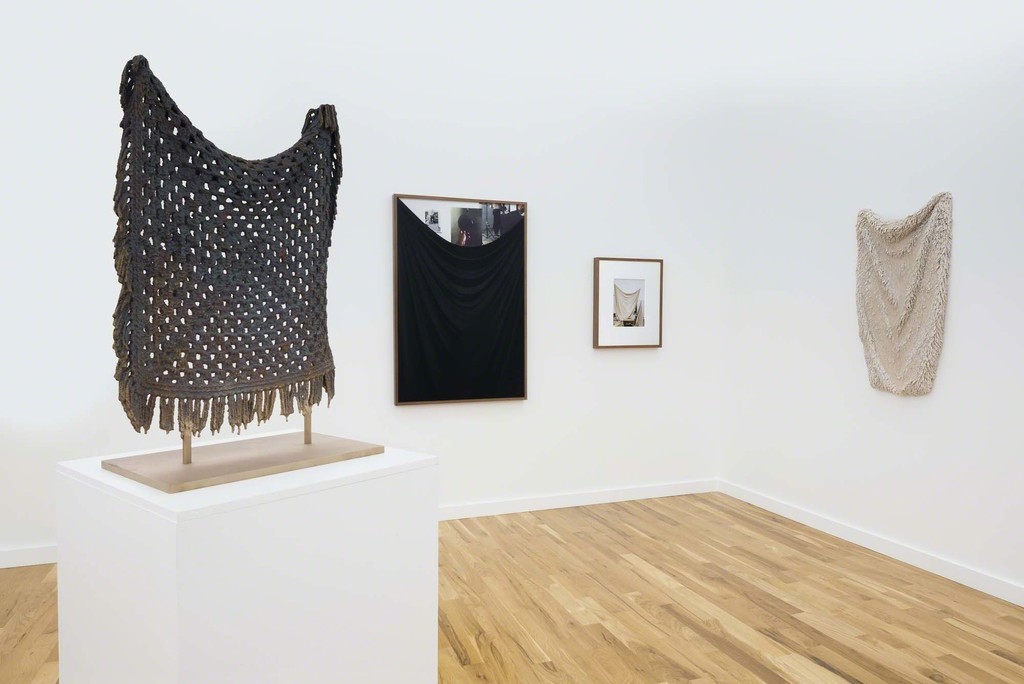 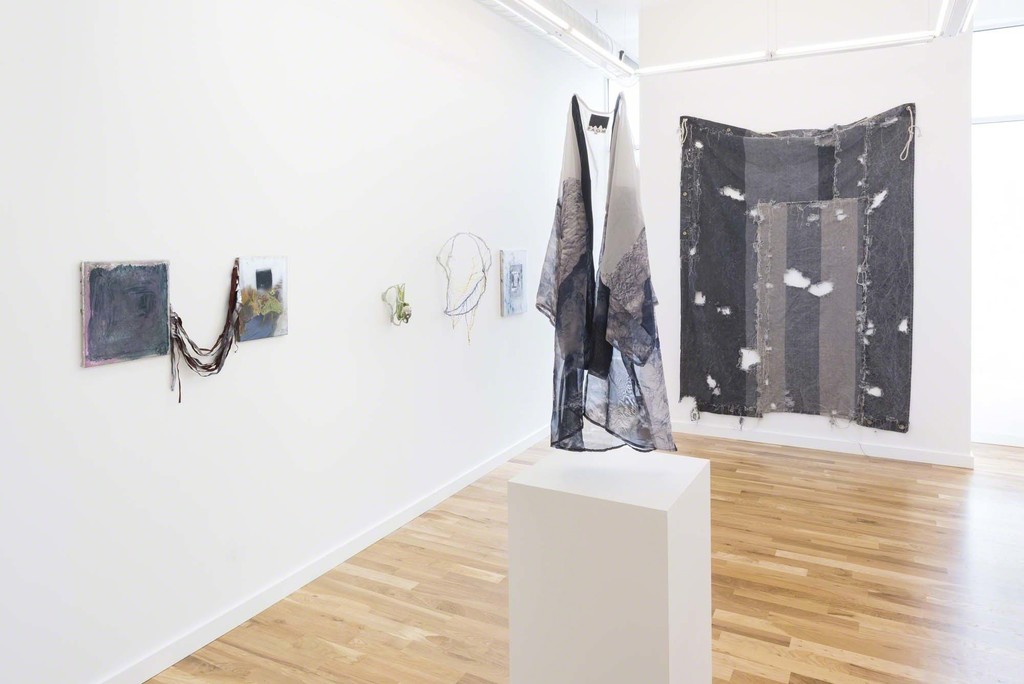 The 15 artists and one collaborative team in this show, in one way or the other, tackle the similar concept of a fabric sagging in the middle between two upraised points, using this specific formal gesture to reach different conceptual goals. This premise arose from seeing images of Michelle Grabner’s recent sculptures, bronze casts of hand-crocheted and knitted blankets, many of which were used as templates for her abstract paintings. Her draping forms of reconstituted textile are reminiscent of gallery artist Rachel Niffenegger‘s fabric shrouds, painting/sculpture hybrids that function as clothing, skins and spirits, all referencing the residual imprint of the body.
A Sag, Harbored is a celebration of this form as well as a subtle subversion of the art world “who wore it better” and “who’s____who” memes, websites and social media feeds that try to highlight artists whom have seemingly almost-identical works. “I think the idea of highlighting/celebrating these similarities is fairly fresh since the instinct, especially from a gallery and sometimes artist’s point of view is to pretend like they don’t exist,” said Niffenegger about the possibility for this exhibition. Along this vein, the show will include a Nicholas Frank biography piece that references the snarky website “Who wore it better,” comparing a possibly-fictional performance staged by Frank to Beyoncé’s video for her song “Ghost.” Also featured is a wall hanging by the fiber artist and designer Tanya Aguiñiga; Elizabeth M. Claffey‘s ethereal photograph of an under garment augmented by hand stitching; Amber Cobb’s bathmat encased in silicon; an articulated wooden drapery by Dan Gunn depicts the sag with rigid parts pieced back together recalling both rural Midwestern aesthetics and early Modernist experimentation with modular forms; a monoprint by Kate McQuillen made by running her clothing through a printing press; a distressed canvas by Holt Quentel; a layered painted fabric installation that riffs on traditional Indian textiles by Preetika Rajgariah; Paul Mpagi Sepuya’s fragmented photographs of male bodies hidden and revealed by heavy draping; a kimono by Rick Silva and Jordan Tate that features a satellite image of the Bering Strait appropriated from the Russian SRC Planeta webserver; mixed-media abstract paintings by Gyan Shrosbree; Loring Taoka’s acrylic painting on plexiglass is an exploration on perception using geometry as a starting point; a painted and folded multilayer Josephine Messer painting that breaks the pictorial space to form an undefinable shape; and Molly Zuckerman-Hartung’s expressionistic diptych tethered together by sagging ribbons of shredded canvas.
A Sag, Harbored opens at Western Exhibitions’ new gallery space in Chicago’s Ukrainian Village on Friday, July 14 with a reception, free and open to the public, from 5 to 8pm. The show will run through August 19. Gallery hours are 11am to 6pm, Tuesday–Saturday. Please contact [email protected] or (312) 480-8390 for more information and/or images.