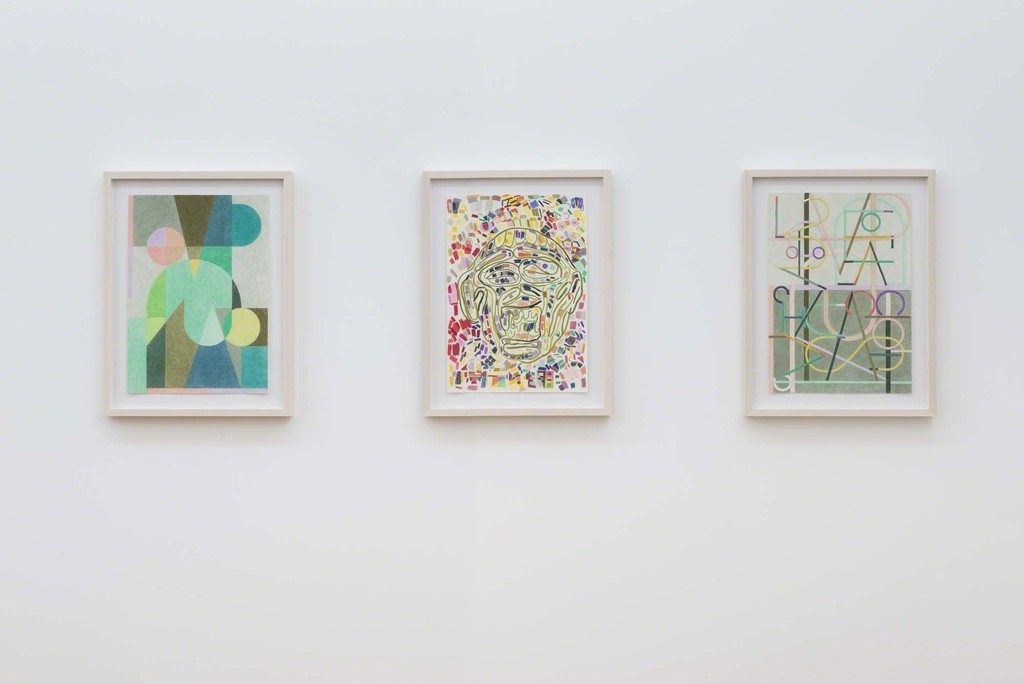 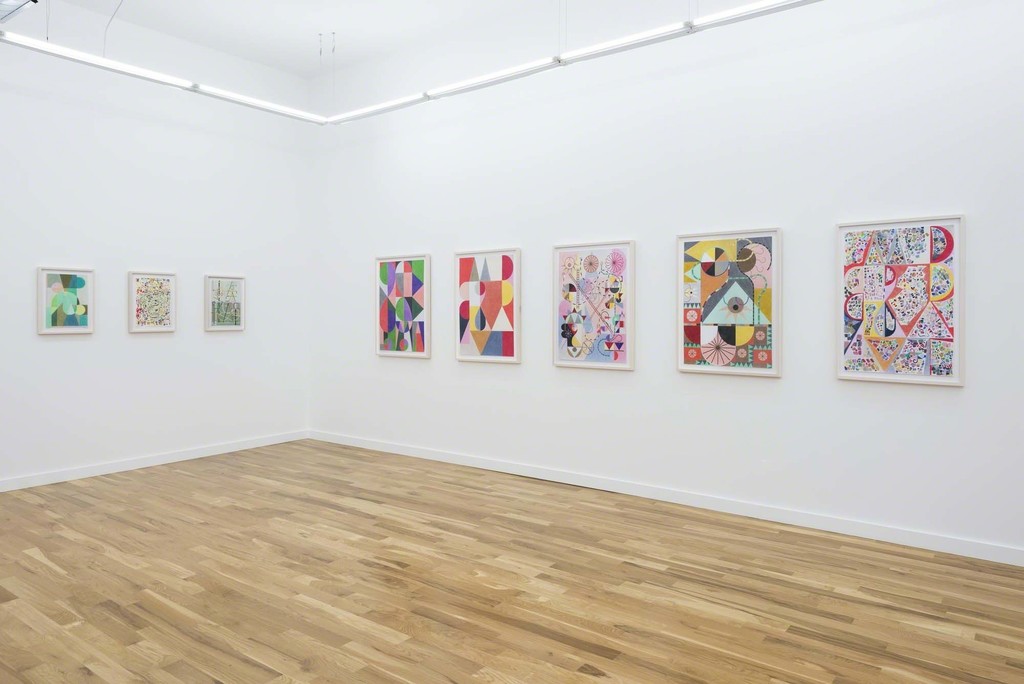 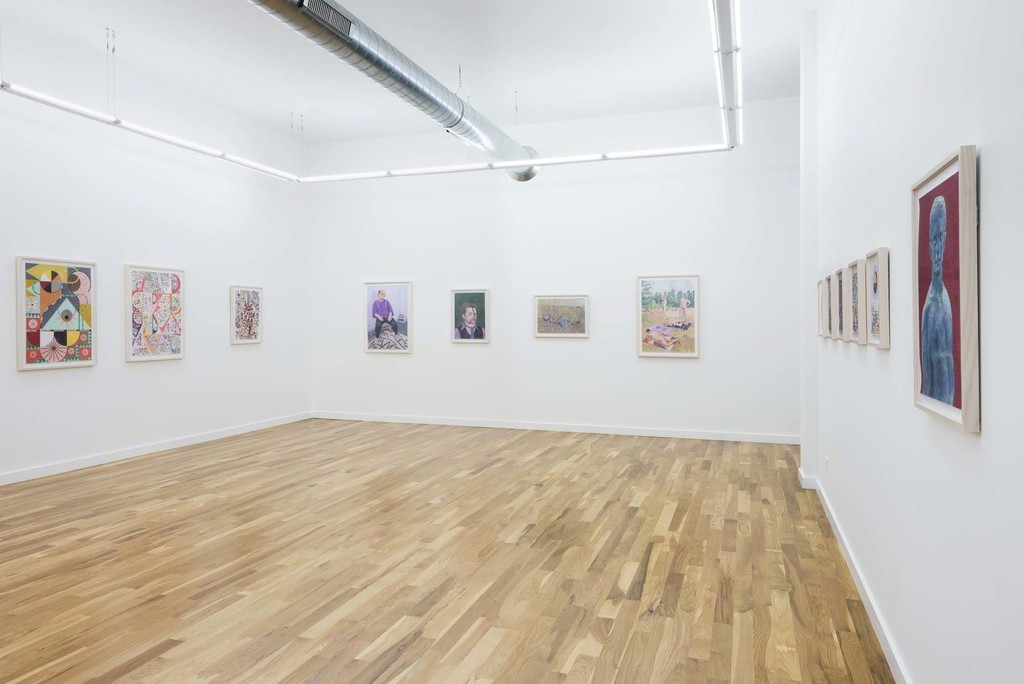 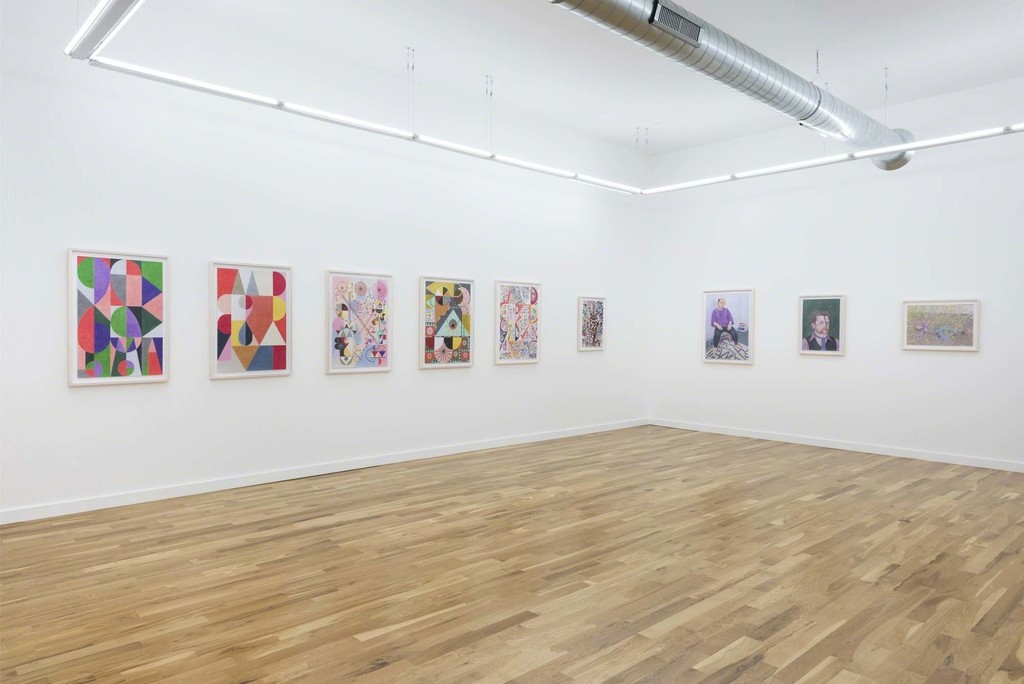 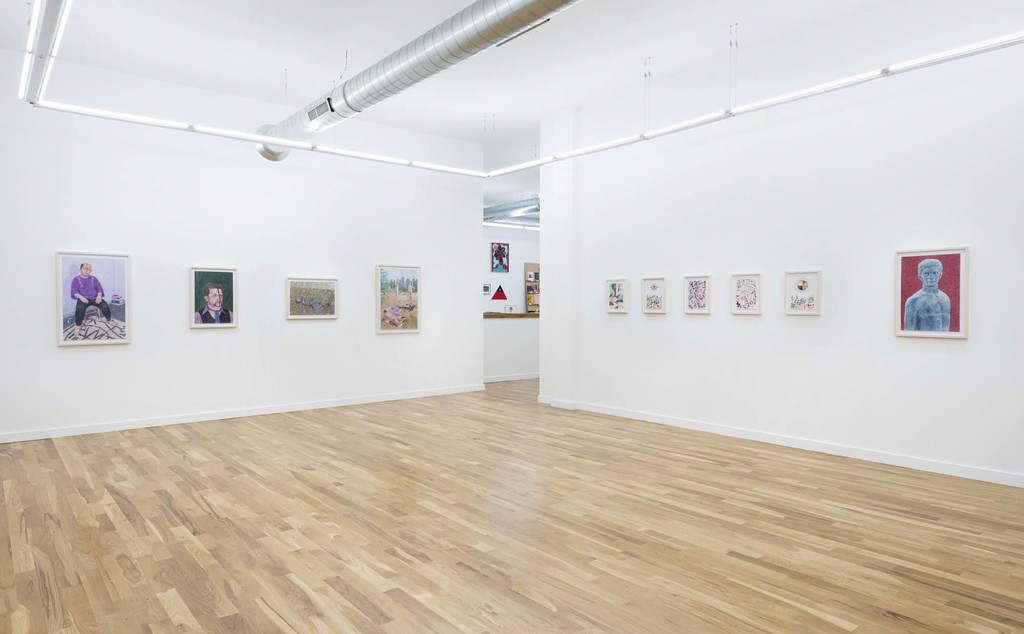 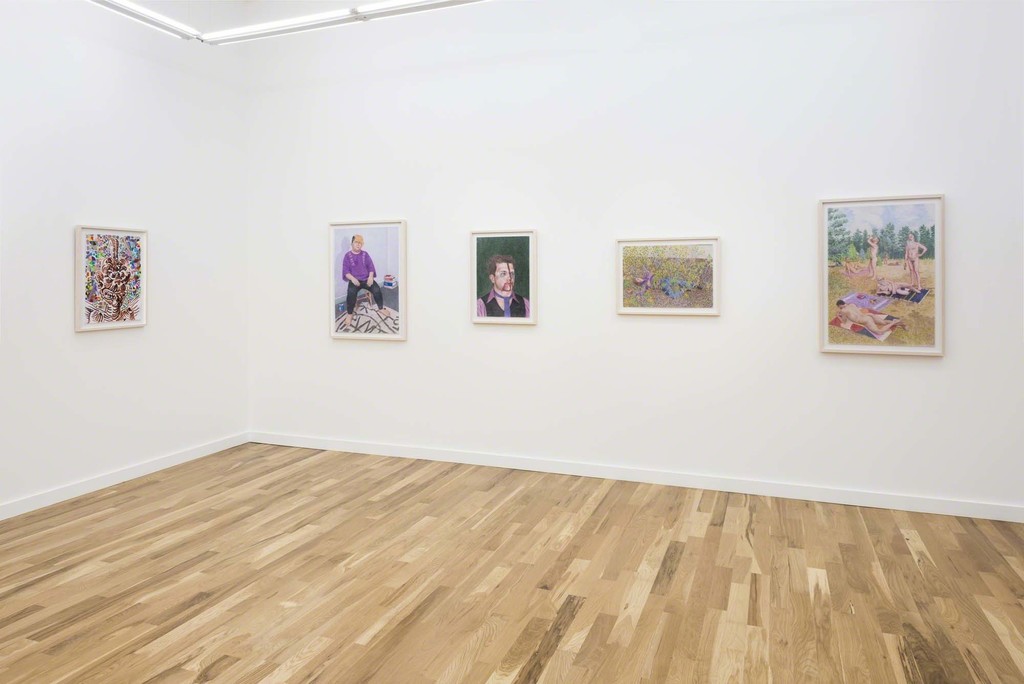 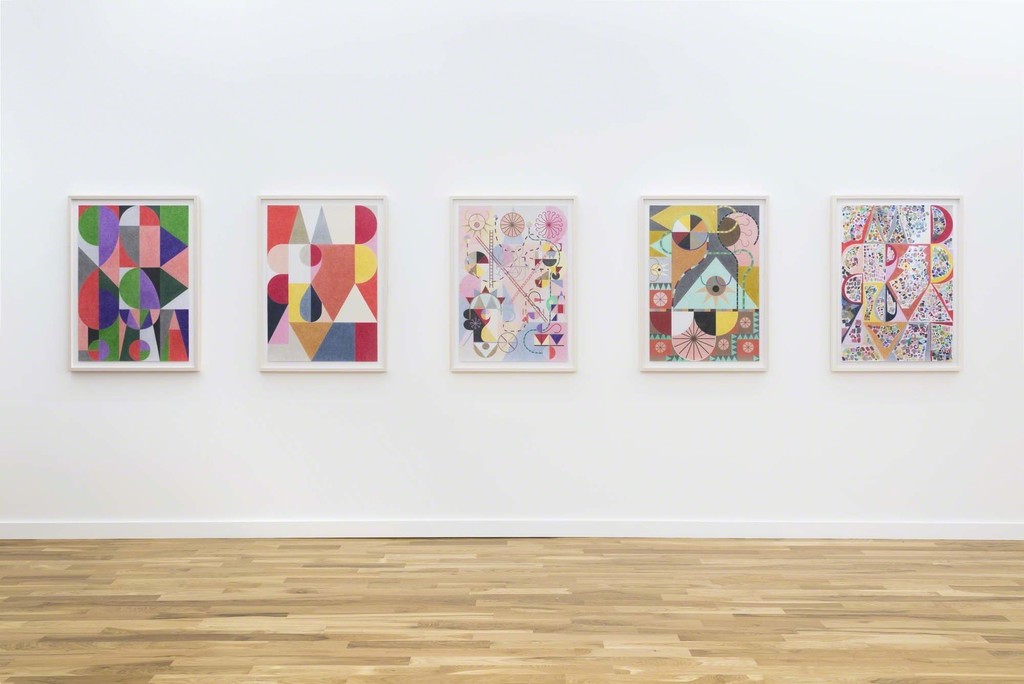 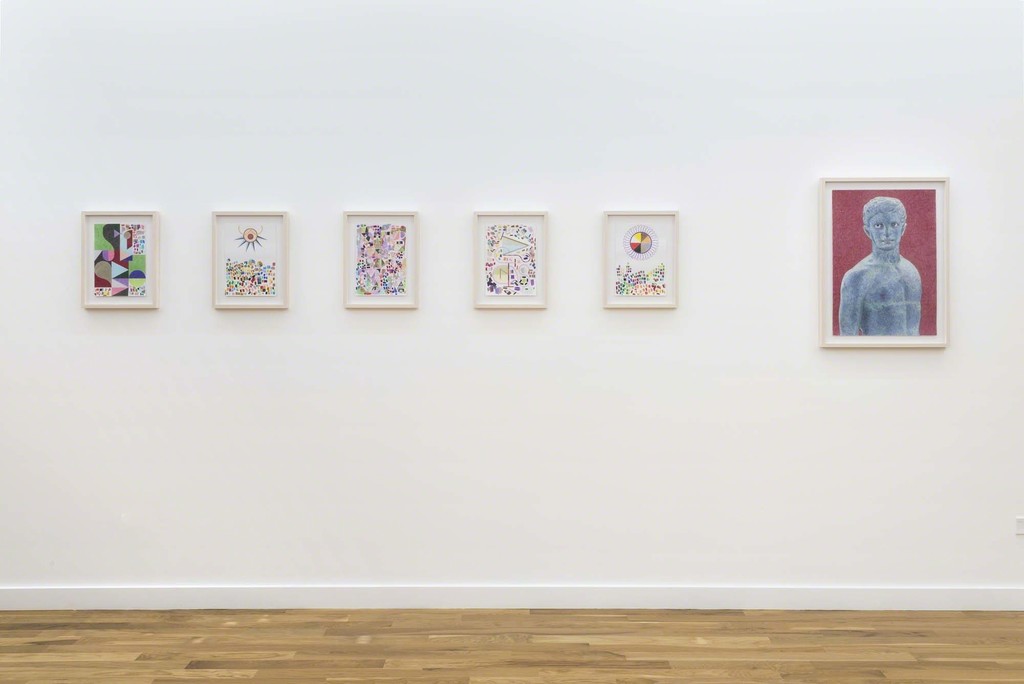 Western Exhibitions is thrilled to present The Dead Know Everything, a solo show by gallery artist Elijah Burgher, his first solo show since moving to Berlin from Chicago one year ago and his third show at Western Exhibitions. Burgher will show new colored pencil drawings that ruminate on friendship, death, flags, gods, demons and paradise in Gallery 1 (his notes on the work are below) and he’s invited the multimedia artist Sofia Moreno to show in Gallery 2. Both shows open with a reception, free and open to the public, on Saturday, April 15 from 5 to 8pm and run through May 27, 2017.

Notes on "The Dead Know Everything" by Elijah Burgher:

Most of the "flags" are based on a symbol I have been calling "Eden." It doesn't symbolize anything in particular, having morphed from a logo for an imaginary cult to a sort of signature and on to a glyph for a mysterious machine. It's a placeholder for meaning, a vessel to be filled with significance through use. Some of the flags are simple, geometric abstractions, reminiscent of Bauhaus textiles. I've added forms to others, pinning symbols to them, criss crossing conduits and decorative details, burying them under “bells and whistles.”

Eden (as a concept as well as a landscape), snakes and ladders and rainbows, "the dead know everything," psychopomps and demons... these all refer to religious ideas, shamanistic ones in particular. A paradisiacal past. Imagery of ascension to a celestial zone of gods and spirits or descent to an underworld peopled by evil entities and ghosts. Snakes and ladders imagery, from the board game, feature in two pieces ("Eden flag w/ solar-anal emblems and hexes" and "Death of Humwawa." Snakes and ladders are figures of infernal descent and heavenly ascension respectively, and can be found in various shamanisms from across the globe. The original Indian boardgame and its later Victorian version had a moral significance: ladders represented virtues and snakes represented vices. I am not interested in the moral lessons, just the beauty of the gameboard and the cosmological symbolism.

William Pisarri (1971-2007), Tom Daws (1970-2013) and Mark Aguhar (1987-2012) were three dear friends that I lost while living in Chicago. I wanted to draw each of them while they were alive, and then committed to portraits of them after each passed. Perhaps it took leaving that city to finally bring myself to make these pictures? Each died too young. Bill was a member of the Flying Luttenbachers, a great noise band from Chicago. He and Rebecca Walz were best friends in high school. She introduced me to him. Before he passed, we'd started to make some improvised noise music together. Tom was Doug Ischar's partner. He worked in the film industry, doing special effects, splitting his time between LA and Chicago. I made a video documenting a ritual with him. Mark was an artist, pursuing her MFA at UIC. I danced with her regularly at Chances and other queer parties around the city. I gave her scabies once. She told me I was a crust punk. I made her a sigil, which she had tattooed in magenta on her forearm.

Gods & demons ... The portrait of Hermes is based on a statuette in the collection of the Yale Museum of Art. The surface is scarred and stained with age, which combines weirdly with his subtle "come hither" look. Hermes, importantly, escorts dead souls to Hades. It is my intention to underline this jarring amalgam of time-battered body and seductive pose in the figure of the penultimate psychopomp by straightforwardly representing this sculpture. Humwawa and Pazuzu are both ancient Mesopotamian demons. Humwawa is the intestine-faced monster that Gilgamesh and Enkidu kill for the thrill of adventure in the Gilgamesh epic. Pazuzu, a chimerical demon whose likeness was originally used to scare off other demons, is best known in contemporary times as the spirit that possesses the 12-year-old girl Regan in The Exorcist.

"Grünewald" is a multi-figure composition based on days spent in the sun with AA Bronson, his partner Mark, and my husband Jonathan this past summer. Grünewald is a park on the western outskirts of Berlin with a large gay nudist section where men cruise openly. It's both Edenic and demonic. And, again, friendship as a thread that runs through the show.