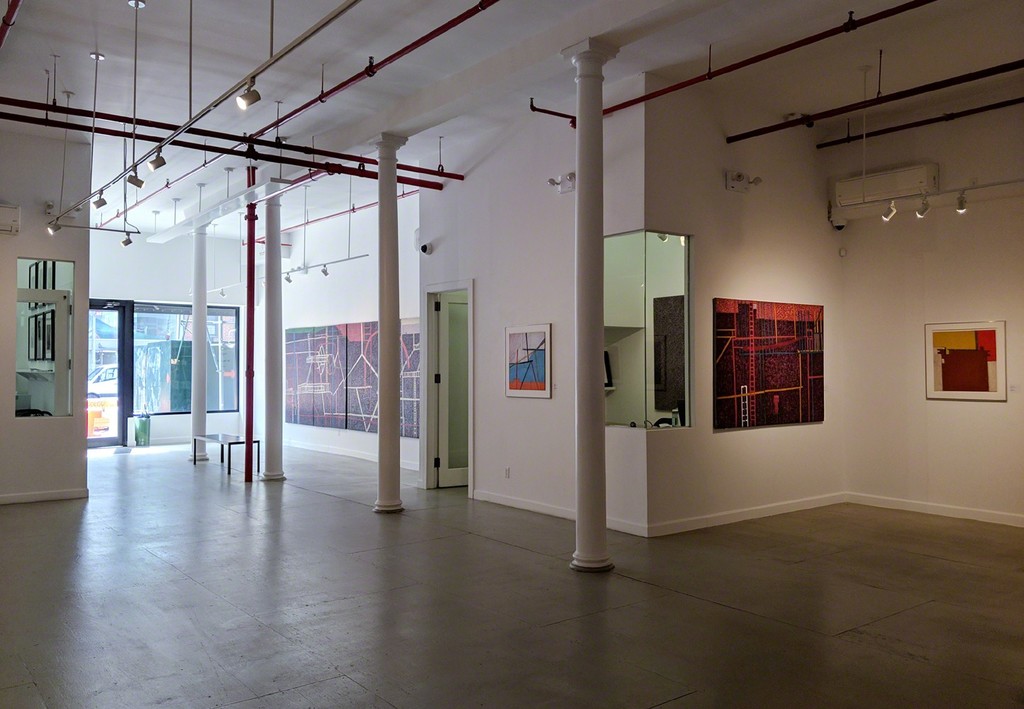 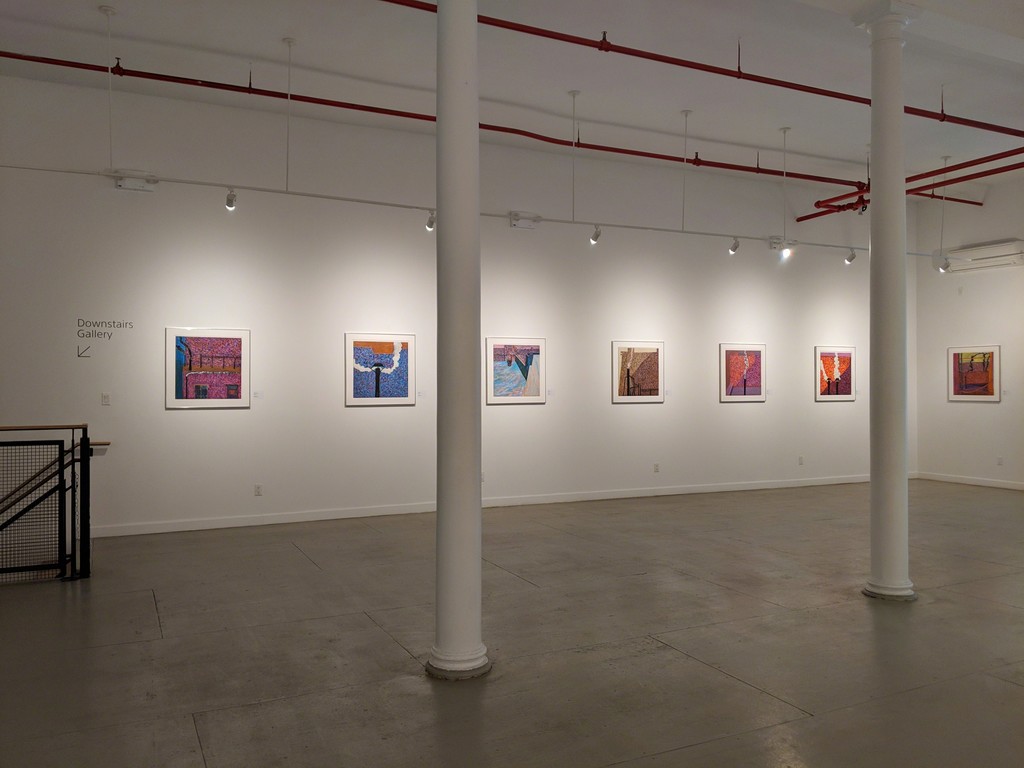 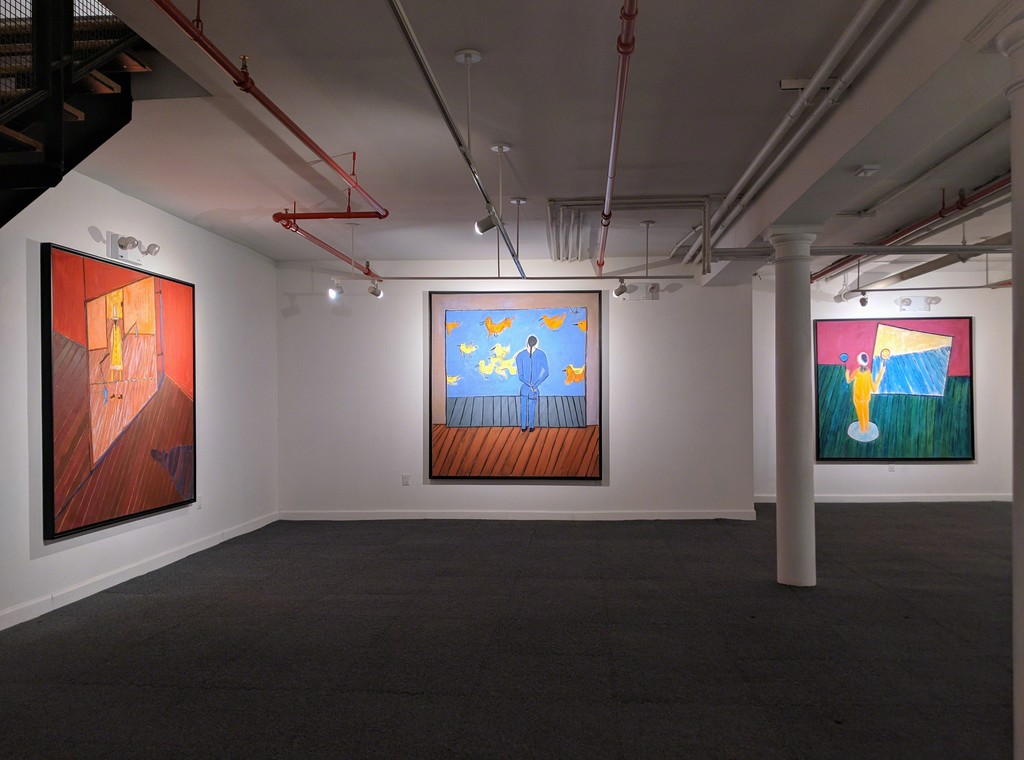 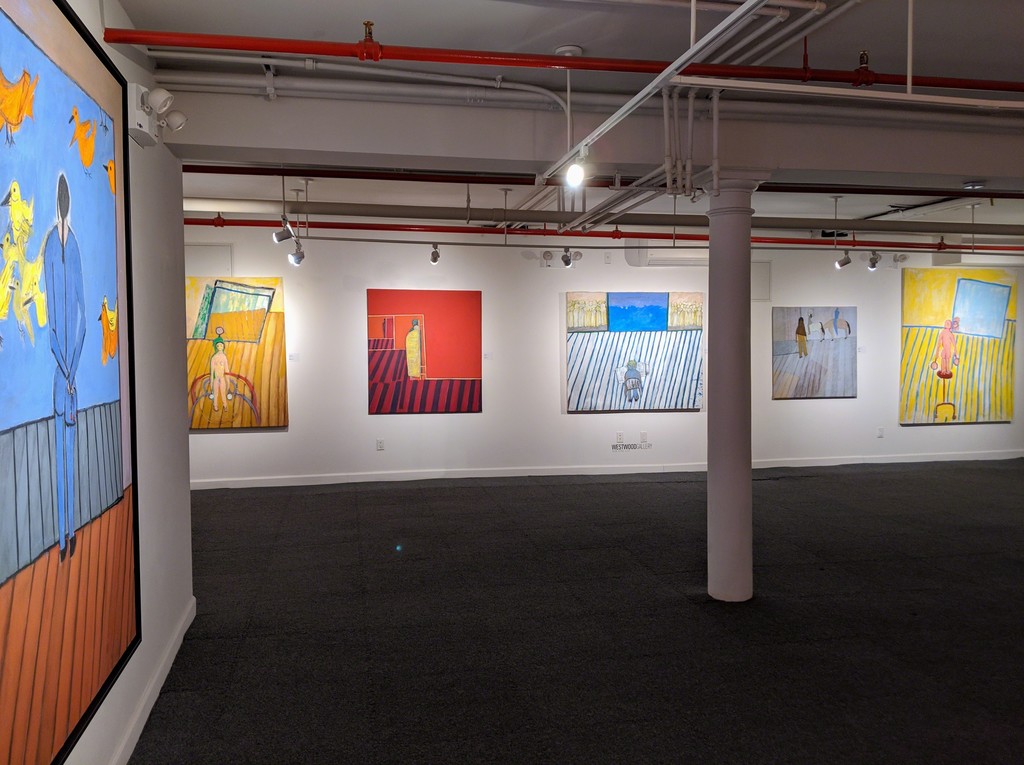 New York, New York – WESTWOOD GALLERY NYC is pleased to present a solo exhibition of paintings by downtown NYC artist James Juthstrom (1925-2007). The gallery continues to promote the legacy of this extraordinary artist and maintains the ownership and archive of Juthstrom’s artwork.

The paintings on exhibit explore the artist’s inner dialogue in viewing the interior and exterior of his loft on Broome Street, where he lived for over forty years. The work includes cryptic visuals of Juthstrom’s living space with floorboards, skylights, shadowy figures and geometric angles. From the inner to the outer, a series of abstract work focuses on SoHo’s urban view of smokestacks, windows, rooftops, angled bars and ladders. A highlight in the exhibition is a four panel 17 foot x 5 foot painting, which maps a convergence of fire escape ladders with colorful bars and an obscure red canister and container on a ledge, leads to a mysterious message of order in disorder.

In the early 1950’s, James Juthstrom studied at the Brooklyn Museum Art School under Bill Kienbusch (Modernist painter, 1914-1980) and Reuben Tam (American Landscape painter, 1916-1991). Juthstrom’s artwork was noted by his peers and he participated in five group exhibitions at Brooklyn Museum (1955-56), Paul Schuster Art Gallery (1956), Whitney Museum of American Art (1956), and Detroit Institute of Arts (1957). Concurrently, Juthstrom landed his first solo exhibition at Gallery G at 200 East 59th Street in 1957. Following his initial success in the 1950s, he found himself depleted, no longer able to paint. Instead, he traveled the country in 1961-62, taking in the radiance of the Hawaiian Islands, mountains of Southern California and highlands of the Southeast. When he returned to New York in 1965, Juthstrom leased the top floor of an abandoned, burned out brownstone building on Broome Street and West Broadway “as is.”

After moving into his new studio, Juthstrom moved away from his early representational landscapes to capturing the breadth of the city. Throughout the late 1960s and early 1970s, his paintings began to reflect an abstracted skyline of SoHo, reducing the buildings outside of his loft to fields of color. Working in oil on board, Juthstrom formed rich cityscapes, drawing inspiration from the same movement as Richard Diebenkorn for his abstract Ocean Park paintings. During these years, he also became fascinated with astronomy, celestial bodies and earth plate tectonics.
Around 1972, Juthstrom was diagnosed with ocular melanoma, and his vision began to gradually deteriorate. Soon after, his paintings of fire escapes and brownstones evolved into intricate, patterned mazes overlaid with structural motifs, evoking the mystical style of Mark Tobey and the early Fauvist work of André Derain. The fire escape paintings series was completed in 1975, when Juthstrom fell off a ladder onto an open flat file drawer, as he attempted to paint the ceiling of his studio. After returning from the hospital, Juthstrom began pure abstract work, no longer choosing to capture a representation of SoHo’s gradual gentrification.

By the 1980s and 1990s, Juthstrom’s vision worsened, and he began to fall into a reclusive depression. Soon, he began painting the memories and spiritual reality he associated with his loft. His figurative works depict floorboards, empty space, ghostly figures, and an occasional noose. A striking example includes a melancholic scene where the artist bleeds over his recent canvases, while his more celebrated, earlier work hangs safely on the wall.

Juthstrom persevered to overcome the circumstances of his life, sublimating all his pain through this last period of work. He had few commercial outlets for his artwork, due to his focus on his painting and not on finding galleries to exhibit or sell his work. The artists in his neighborhood were in awe of Juthstrom’s talent, he was visited by well-known artists of the time who commended the commitment to his art.

Westwood Gallery has continued to uncover the history of this brilliant artist and ‘Insight’ is the fifth solo exhibition in the gallery for James Juthstrom’s work.