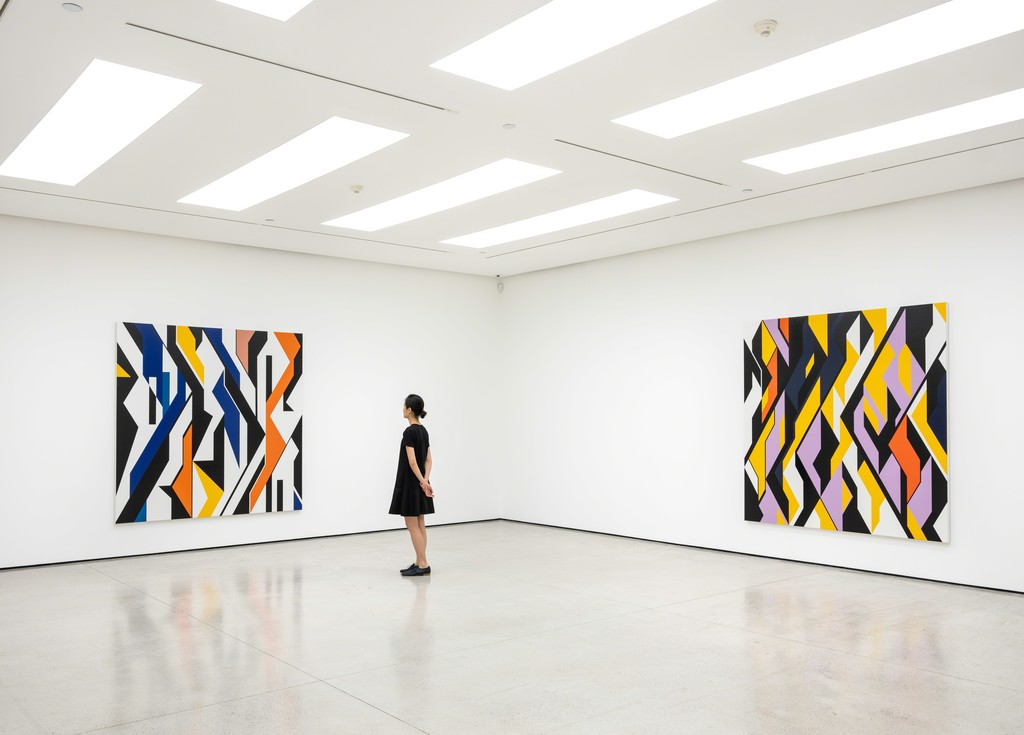 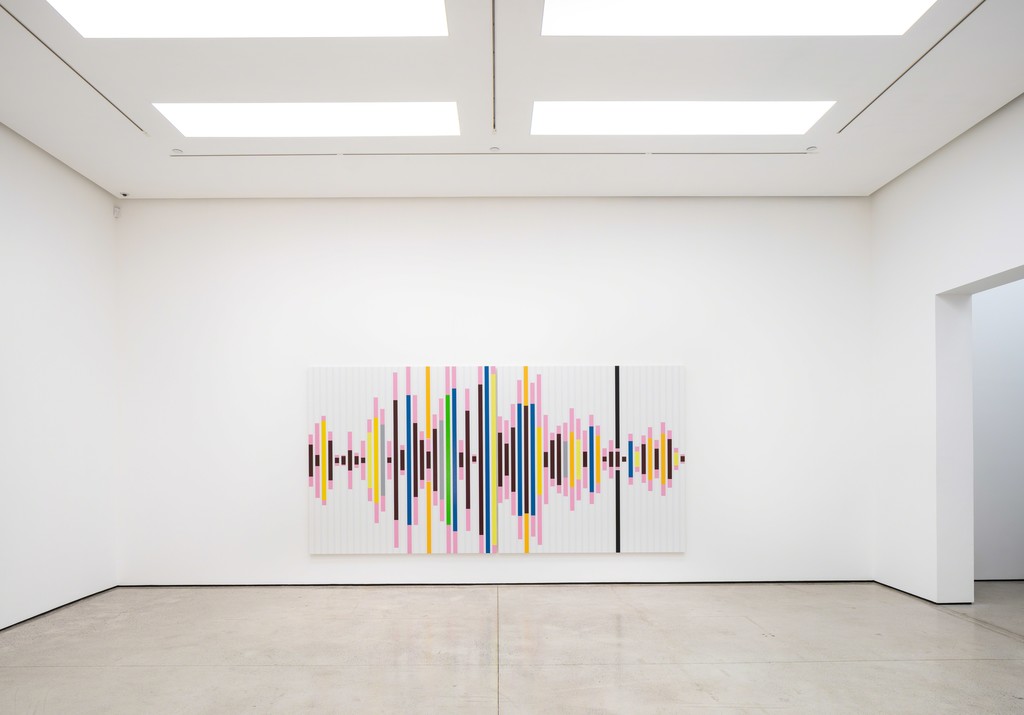 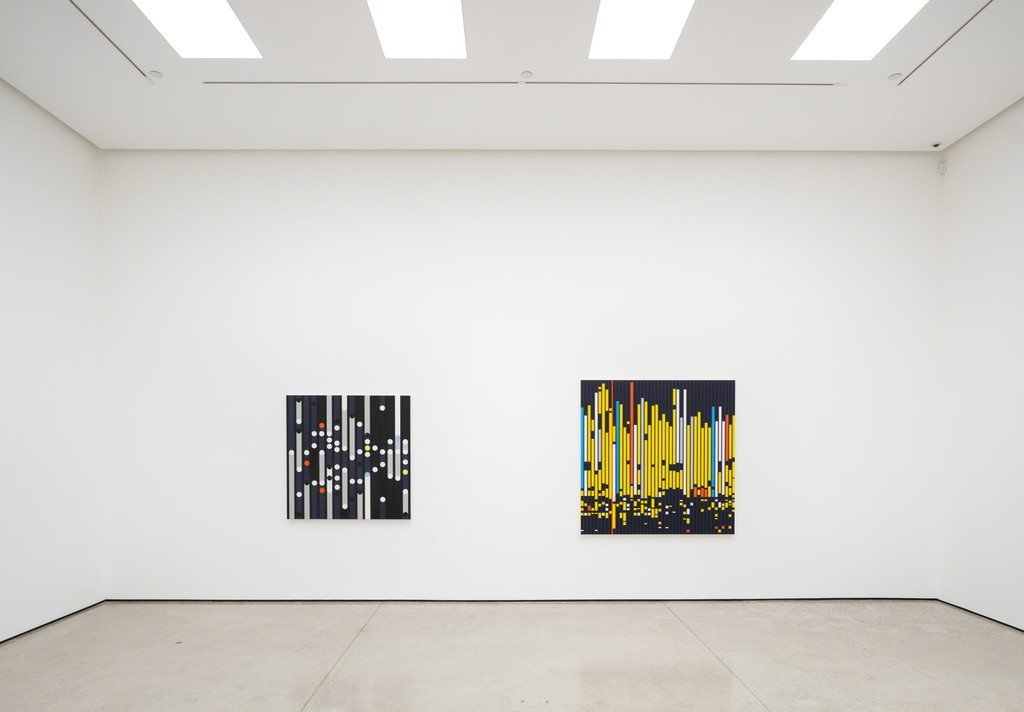 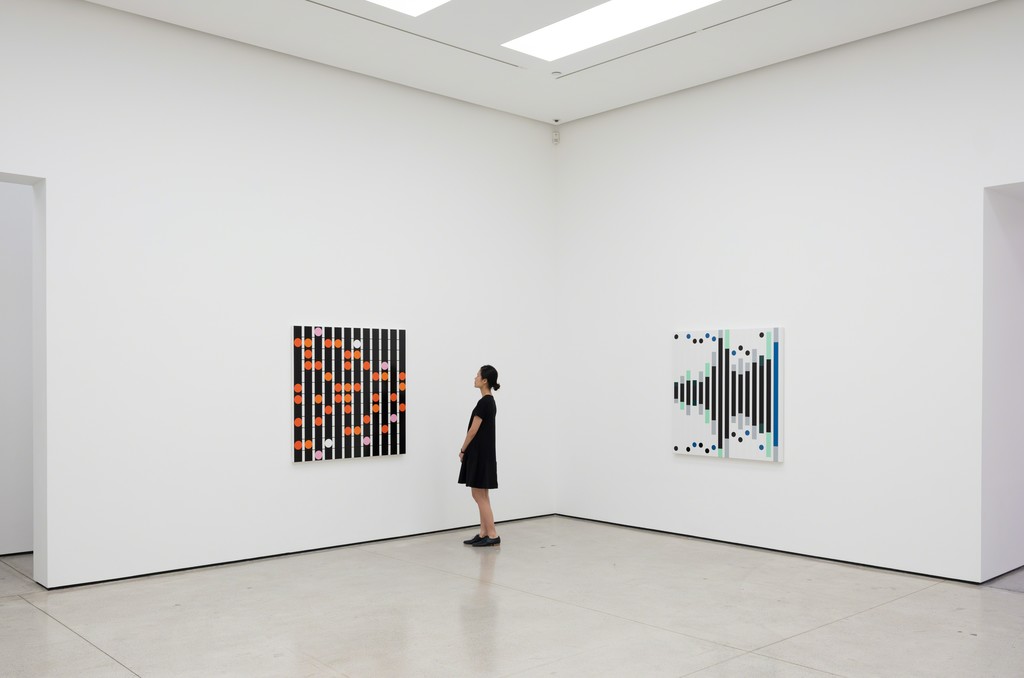 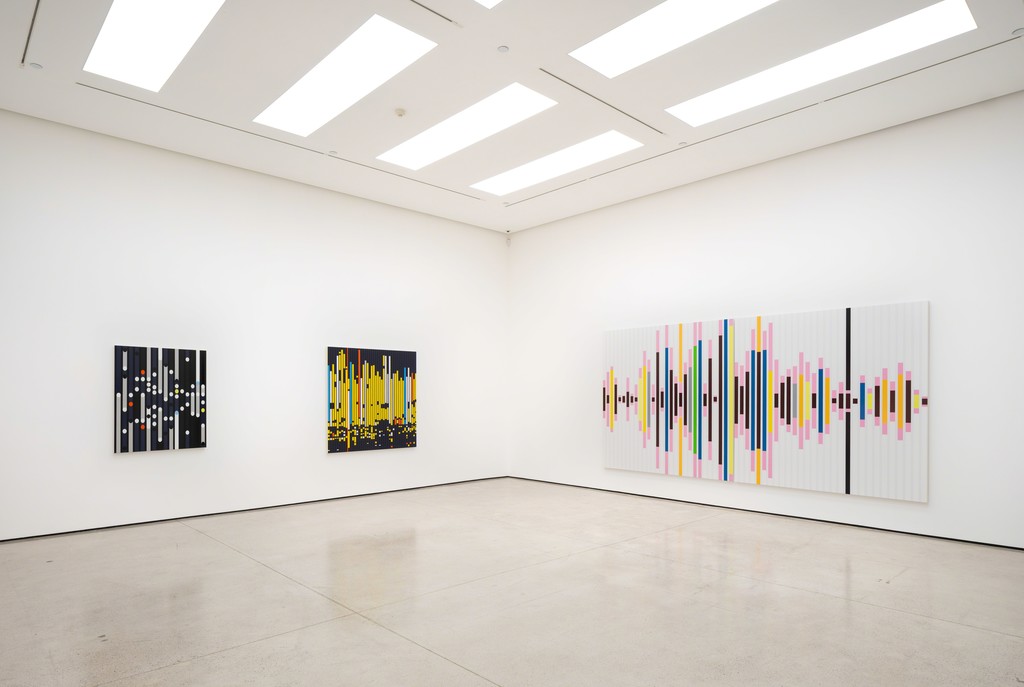 Since the mid-1990s, Morris has been making both paintings and films that manipulate bureaucratic forms and social structures, playing with ideas of surface to reveal power constructs in flux. Her non-narrative films, which can be understood as fantasies of place, are produced in parallel to the paintings; dual practices that are described by the artist as ‘two sides of the same coin’. Using her signature abstract and geometric painting language and a sense of hyper-reality in the films, she portrays a vision ordered by social forces, where the boundaries of fact and fiction, ‘truth’ and its representation are always blurred.

Morris’s paintings are an index of place that nonetheless maintain an endless series of global connections. She uses the grid as a network that is constantly expanding beyond the immediate field of vision. Her new ‘Sound Graph’ paintings were begun after she had crafted a script from James P. Carse’s cult book ‘Finite and Infinite Games’. Functioning as both philosophical thesis and warning, Morris asked Alexander Kluge, the German poet, lawyer and filmmaker, to read the script for her 2017 film of the same title. After selecting passages of dialogue, which she introduces into software programmes, Morris finds the visual starting point for her paintings. Incorporating lines, bars and dots, these highly seductive canvases give a sense of volumetric build-up and release, evoking a feeling of movement and perhaps even the sense of an industrial landscape. In this series, an idea becomes language, words become re-encoded as visual information, and sounds become image, serving to highlight an understanding of language as construct, particularly relevant to our ‘post-truth’ age.

The ‘Abu Dhabi’ paintings continue Morris’s distinctive methods whereby she uses barcoding software to create compositions from a range of references including GPS technology, topographical mapping and QR codes of locations. The paintings absorb Abu Dhabi’s signifiers of place and time and reconfigure them within the canvas so that industrial products, signage and material surfaces combine to evoke the heat, adrenalin, compression and exhilaration that characterize this particular place. Through a careful articulation of observed and encountered elements the ‘Abu Dhabi’ works, like all of the artists paintings, generate a virtual depiction of place. Morris does this not by depicting abstract images of architecture but by employing its attributes – such as a manipulation of light and form – to create open-ended works that appear part of a system larger than their individual parts.

In the film Abu Dhabi (2016), commissioned by Guggenheim Abu Dhabi, Morris approaches the scenes she captures democratically, incorporating situations as varied as The Abu Dhabi Falcon Hospital; an interview with the former translator of the late Sheikh Zayed, Dr. Zaki Nusseihbeh; the Sheikh Zayed Bridge designed by Zaha Hadid; the Um Al Naar Refinery; the Liwa desert; archival footage sourced from the early days of urban development in the 1970’s and the staged National Day ceremonies at Henri Colboc’s Zayed City Sports Stadium. The resulting manifesto of situations and images allude to Abu Dhabi’s history, its rapid growth and financial prosperity, as well as to the city’s projection of spectacle and illusion. Focusing in particular on Abu Dhabi’s extreme geographical location between the desert and the sea and the hierarchical systems of power that are embedded within its social and political infrastructure, Morris depicts ‘a society that, in a way, knows its limits in terms of time...’