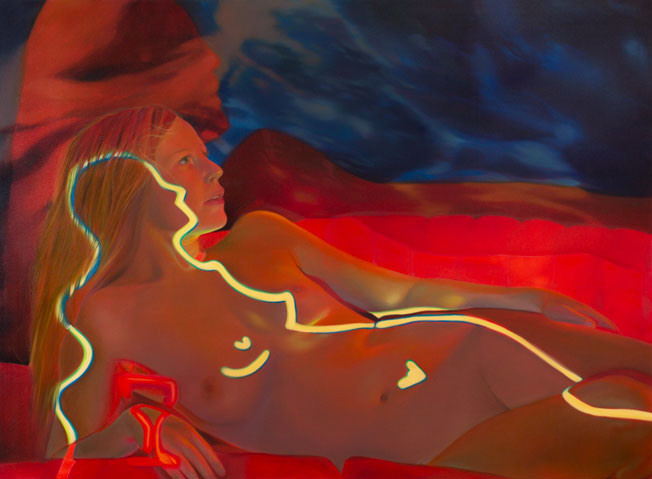 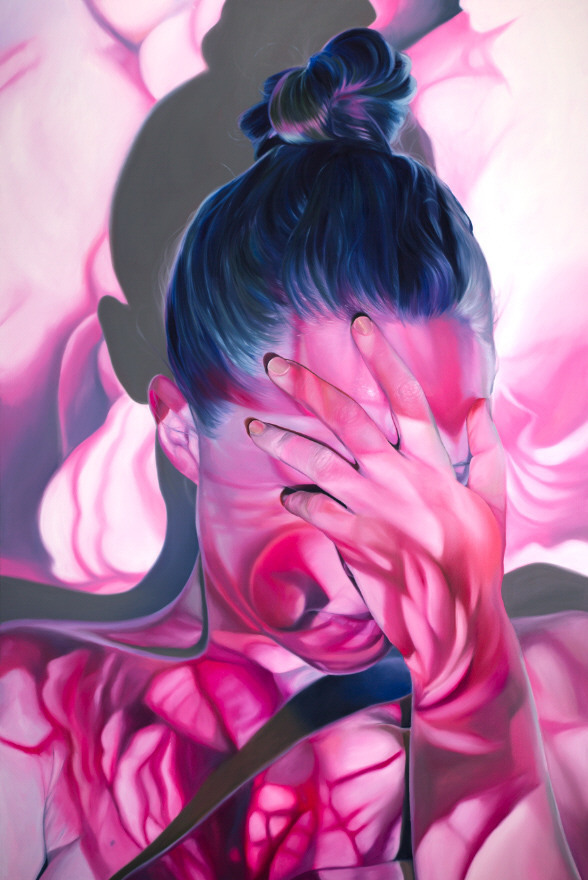 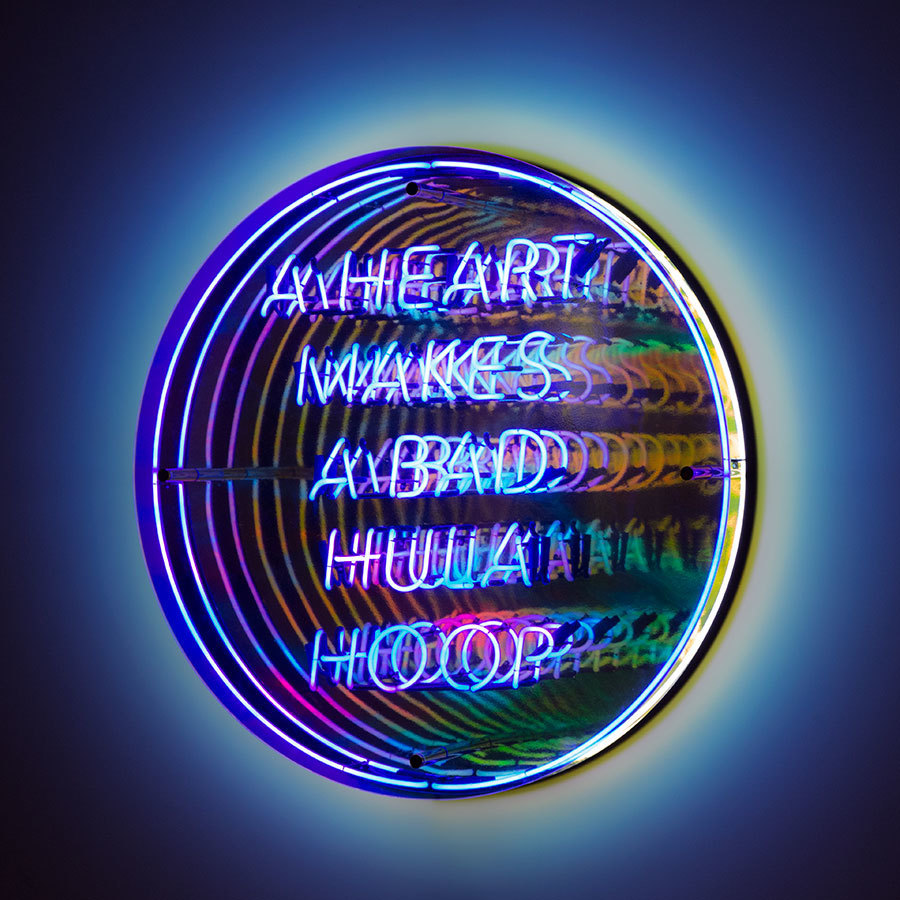 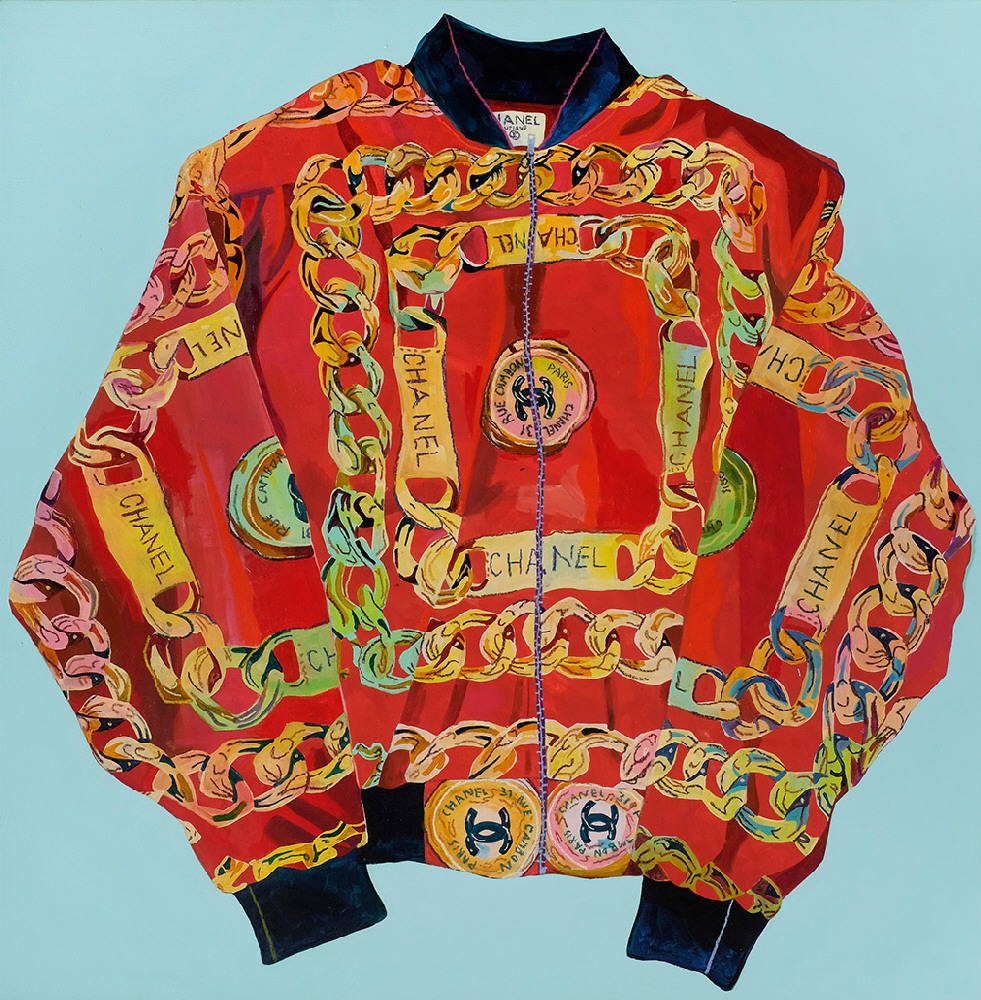 Jen Mann
Disillusioned with the art world’s emphasis on commercialism, Jen Mann views her paintings as physical and visual manifestations of ideas rather than as products. Within her work Mann toys with color saturation and hue to expose previously unseen details and challenge conventional notions of beauty and intimacy, revealing the hidden magic in otherwise awkward images. An important aspect in Mann’s work is her deliberate cultivation of imperfections. Mann prefers the off-shots, the pictures where the subject is blinking, or making a funny face, or looking away from the camera. “I think that there is something special about images that capture awkward or perhaps non-beautiful or posed moments. There is something beautiful in the honest moment.” Mann then heavily Photoshops her images to give them a washed-out look, and to insert various digital “glitches” that most of us would consider undesirable. Mann uses color as a storytelling technique, evoking elements of identity and interpersonal relationships in her paintings. Using imagery and symbols we are familiar with along with her dry and self satirical humour as a unifying force weaving her works together, Mann is able to address our society’s hypocritical and flawed projections of love and desire.

Andy Dixon
Andy Dixon is hyper-aware of art’s relationship with money. Signifiers of wealth abound in his large acrylic paintings, which take as their subjects stately lords, reclining nudes, ornate ballrooms, bathing beauties, and prominent paintings of the aforementioned motifs. Borrowing content from Renaissance art, Flemish still lifes, and Google Image searches of "most expensive vases", his subject matter is selected on the basis of public expectation of what an expensive painting should look like. By sampling content verified as valuable by the market, Dixon positions his own work to ask, "What is the value of a painting of a valuable object?" Our value of art is truly a phenomenon that operates on a set of rules distinct from the ones that govern the rest of our world. Paintings which feature the tropes Dixon samples from perhaps at one time had social or political agency but are now simply commodities assigned value by the highest bidder. Paintings of expensive things are themselves expensive things collected by the wealthy to promote the luxury lifestyle. However, Dixon isn't out to mock the affluent. Rather, he is a complicit player in the game; his larger paintings of upper class social scenes tend to feature his own previous paintings hanging on the walls in the background. As Alex Quicho writes in Luxury Object, Luxury Subject, “ His postmodern non-interest in either vilifying or reifying luxury cooly transmutes its weirdness.” Dixon's work is full of juxtapositions. A self-taught painter, he treats his high-brow content in a crude manner, matching a vivid pastel palette with rough line treatment. His practice has recently expanded to include 3D sculptures which mimic the figures in his paintings—absurdly disproportionate, yet still created with an eye toward beauty. In this way, Dixon's own appreciation of hissubject matter is evident; and while his work questions the subjective valuation of artwork, it also proves that it doesn't necessarily detract from its beauty.

Ben Skinner
Ben Skinner grew up in a small oil town in Southern Ontario. He graduated with a BFA in Interdisciplinary Fine Art from the Nova Scotia College of Art & Design in Halifax in 2000, and with an MFA in Art & Technology from the School of the Art Institute of Chicago in 2003. Ben lives and works in Vancouver, British Columbia. Currently showing with Mayberry Fine Art in Toronto, K.Imperial Fine Art in San Fransisco and Hazan Projects in New York. About his work he writes:

As a person interested in many things I have difficulty focusing
I love the blurry and the banal
I believe in the phonetics of materials and the grammar of space
I’m interested in the invisible systems of the everyday
Folk signage: KEYS CUT HERE
Estimation, approximation
and the challenge of accurate measuring
The wisdom of crowds
Old traditions of fine craftsmanship
Twisting a joke out of the mundane
Simple ideas
Semiotics for Dummies
Tactility
The subjectivity of our words
Complexity simplified and back again
Perception. The anatomy of the human eye and the science of seeing
Optical illusions
Loops, self-referentiality, pangrams
The Ridiculous The Absurd. The Nonsensical
Silly-Putty and Slinkys
Self-imposed constraints
Flooding of ideas and materials
Now less is even more
More is More
Ukeleles
Nerding out
Collecting, archiving, processing, filtering, editing
Patterns and the quest to discover them
Puzzles, magic, wonderment
Dogs, death and dopamine
Taking it and leaving it
Underlying meanings, fresh perspectives
Fun and new ways of wasting time
Holding the mustard
Growing accustomed to growing a pair
The history embodied in a rusty tool, or threadbare quilt
Skipping while frowning
Recognizing social and urban phenomena in the everyday
The peculiarities of human behaviour
Pointing at things
Grouping like things together (or unlike things)
Bouncing things against each other
Seeing what sticks
Littoral spaces
The long drive to relate to things - and missing the exit
Doing the The Hokey-Pokey to the Macarena song
Doing the Macarena to the Bird dance song
Hope and Humiliation
A passionate affinity toward all colours known and unknown
Colouring outside and reading between
Meaning in repetition