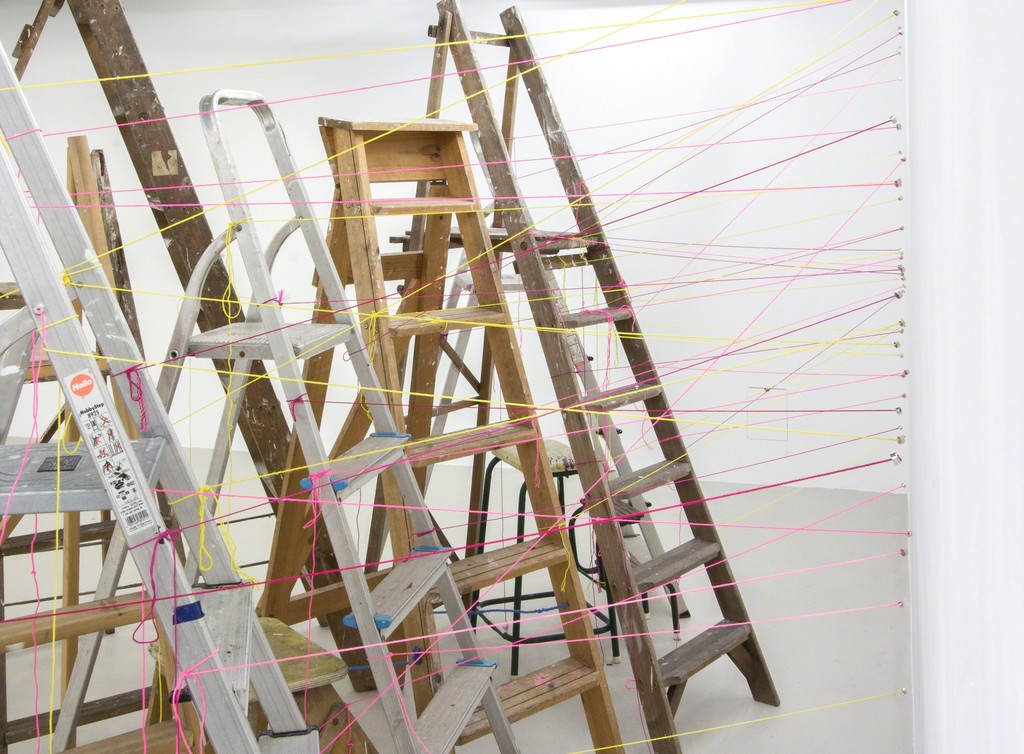 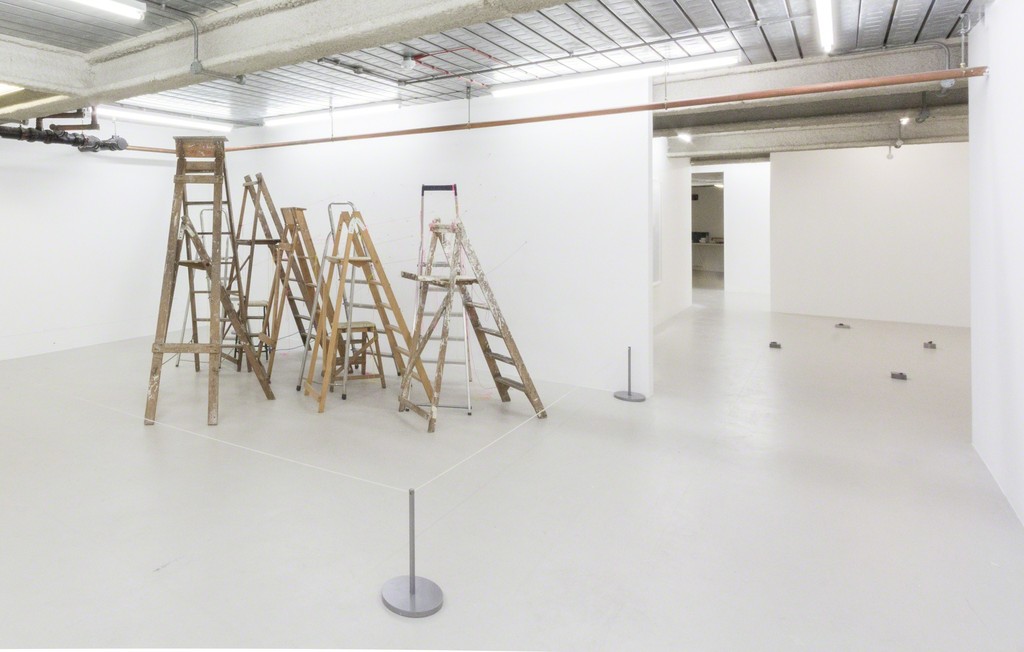 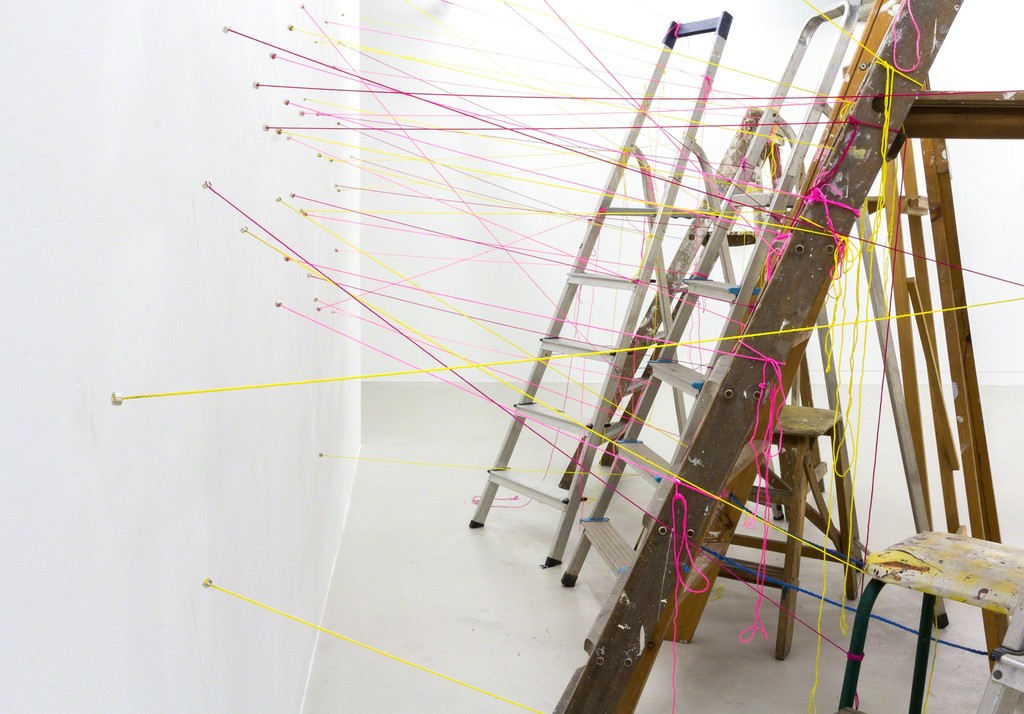 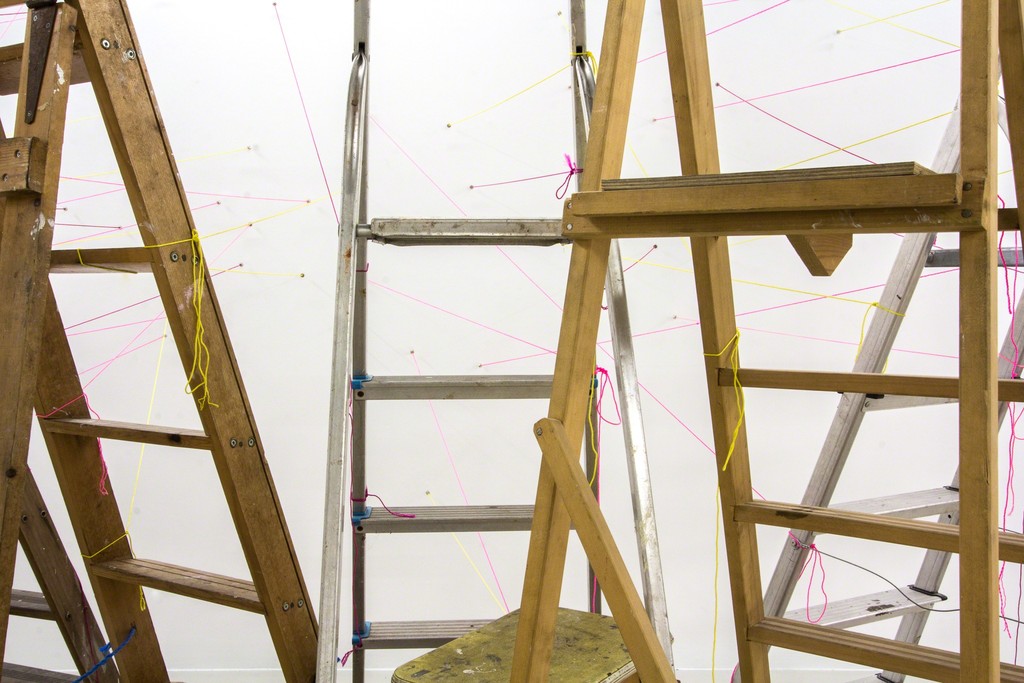 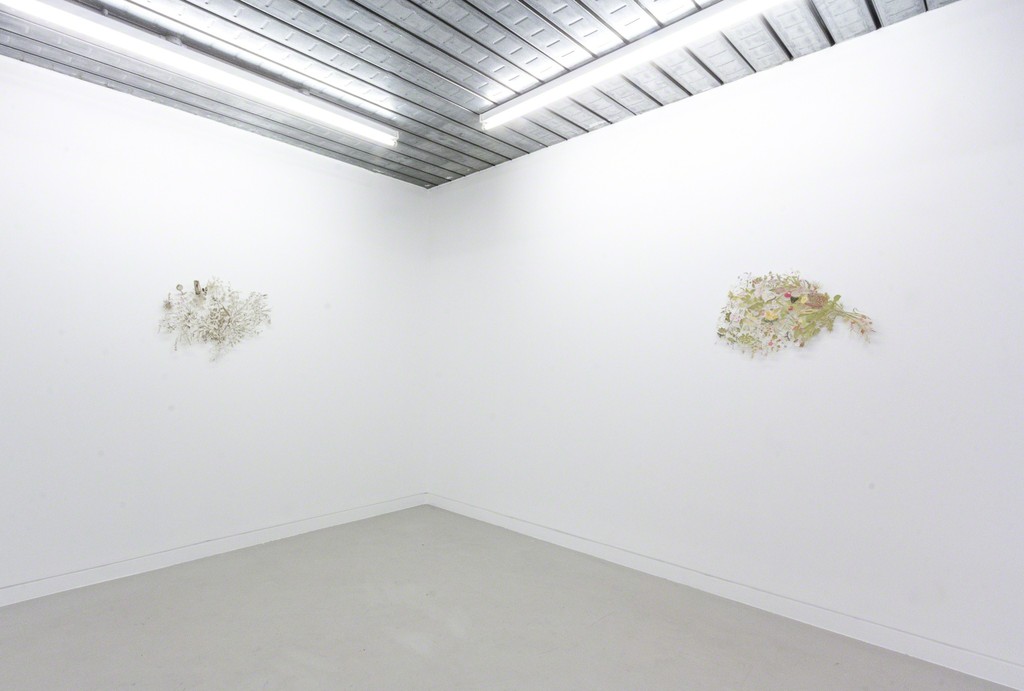 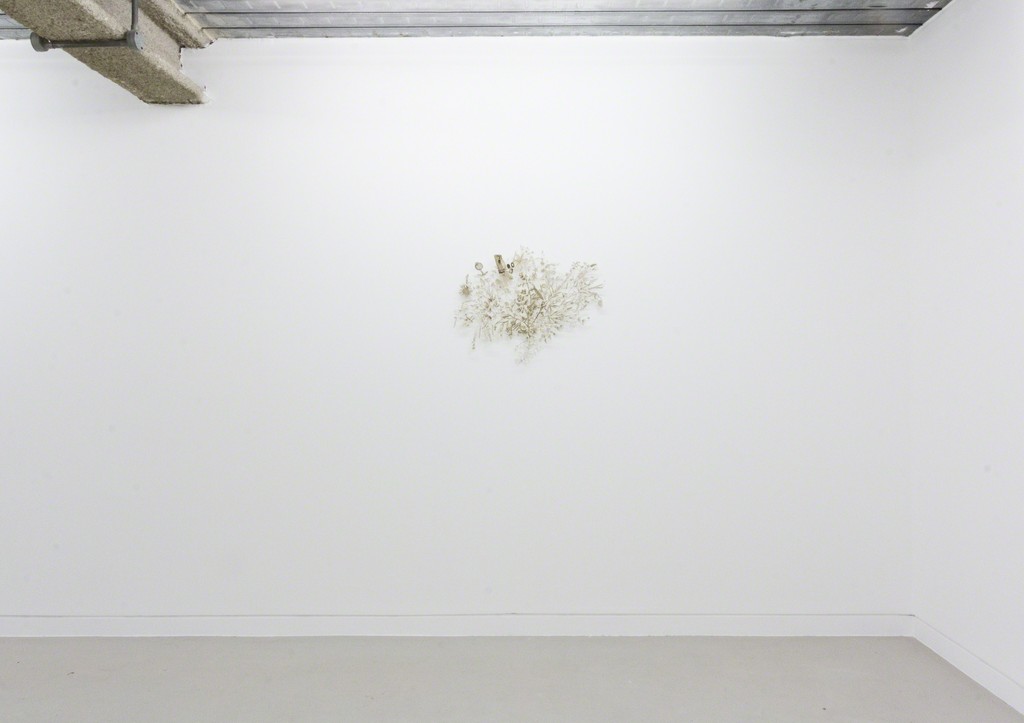 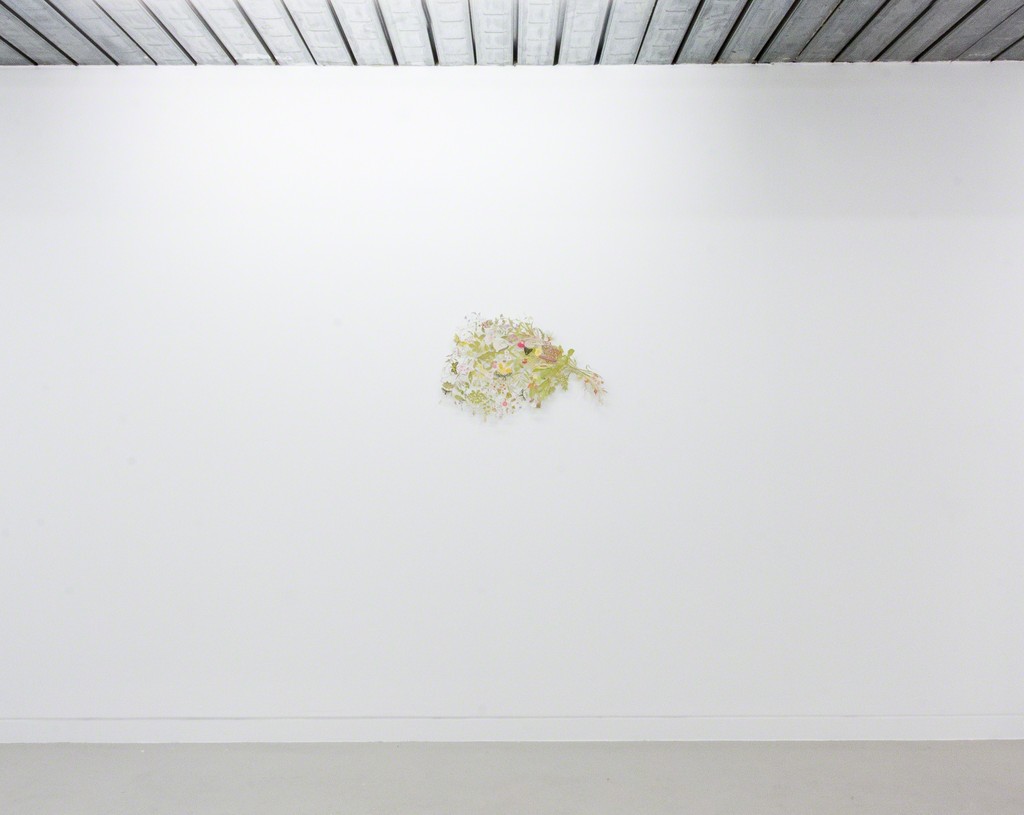 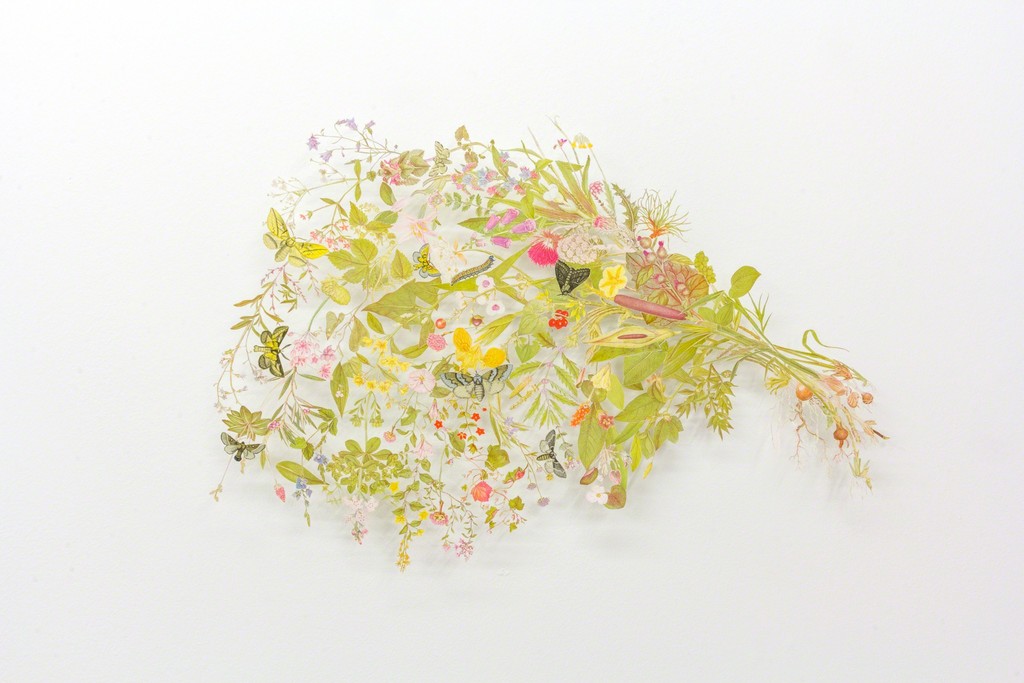 WORKPLACE is pleased to announce All That Fall, the first solo exhibition of Jo Coupe at Workplace London. Bringing together Jo Coupe’s diverse sculptural practice in a wide variety of materials and media, All That Fall explores Coupe’s ongoing interest in the relationship between science and magic.

Informed by investigations into the Natural Sciences, religion, and ritualistic belief systems such as Louisiana Voodoo, Coupe’s interest in the paranormal has led to periods of research into diverse environments ranging from the industrial to the historical and the domestic. As such, her work shifts towards an analysis of objects and materials, and of the physical, cultural and metaphorical forces at play that pervade the meanings we commonly ascribe to them. Her work takes on a political significance by conflating opposing positions of hard science with folk ritual and the stereotypically gendered environments of heavy industry and the home.
Utilising the homespun experimental methodologies of the amateur scientist to recreate supernatural manifestations and transient natural phenomena, Coupe employs her holistic knowledge of the natural world to create sculpture that finds both poetic resonance and a precarious instability in its material form or method of becoming.

Jo Coupe Solid Air (detail), 2017, Stepladders, Coloured Nylon String, Magnetic Field, Rare Earth Magnets, Dimensions Variable. Photo: Wig Worland, Courtesy the artist and WORKPLACE, UK
Solid Air is a large-scale installation made from ladders, string and magnets. Activating the space between the gallery wall and ordinary domestic objects, Coupe engages our childlike fascination with magnetism. Anchored to a configuration of stepladders, metal discs tied to the opposite end of the string are pulled magically toward the wall of the gallery, causing them to float weightlessly in attraction. The architectural qualities of the stepladders are enhanced by the linear qualities of the taut string, which combine to map a complex and colourfully trembling matrix between a powerfully charged field beyond the wall, and the commonplace and functional resting on the floor.

Jo Coupe Untitled, 2017, Bronze, Courtesy of the artist and WORKPLACE, UK
Three tiny bronze sculptures - two birds and a shrew - lie dead on steel slabs, low on the gallery floor. Their blunt presence is countered by the delicate intricacies of their surface. Anatomical details such as hair, ribs and even veins under the skin are visible, pulling the viewer down into their Lilliputian world. This on-going series of found dead animals have been collected and stored by Coupe in their family freezer amongst the ice cream and other plats-de-demain. Cast at home using jewellery-casting techniques Coupe creates miniature monuments that tease our fascination with death through repulsion and curiosity.

Jo Coupe Bleed Now, 2012, Botanical prints, archival tape, dissection pins, 53 x 68 x 4 cm, Courtesy of the artist and WORKPLACE, UK
Bleed Now is a floral collage created from 180 year old botanical copper plate illustrations. Each print has been painstakingly cut out by scalpel and separated into constituent parts (leaves, stems, fruit, flowers, roots etc) before being reassembled into a new and complete hybrid plant and pinned against the wall by dissection pins. 'Bleed Now' is a shortened translation of "Blute nur, du liebes Herz" (Bleed now, you dear heart), a passage from Bach's St Matthew Passion that refers to Judas' betrayal of Jesus. In Bach’s work the phrase is spoken by Cyborea, (Judas' mother) upon learning of her son's treachery. Coupe’s work refers to cutting and healing, and to the oppositional forces of destruction and renewal intrinsic in processes of transformation.

Jo Coupe Crystalline Energy, 2010, Hand Printed Large Format Pinhole Photograph, 127 x 101.6 cm,
Edition of 5 plus 1 A/P, Courtesy the artist and WORKPLACE, UK
Crystaline Energy is a large, hand printed photograph of impossible accumulations of keys, screws, bangles and coat hangars. Forming strange coral-esque clusters, this assemblage was temporarily built beneath the smelting rooms at the Alcan Lynemouth Aluminium factory in Northumberland before it was mothballed in 2012. Documentation of this work was taken before the work was destroyed by a timed power cut from the factory. The images were taken by pinhole cameras due to the electromagnetic field utilised to purify the aluminium, as mechanical and digital cameras were rendered obsolete by the powerful forces above.

Jo Coupe was born in 1975 in Stoke, UK. She studied Fine Art at Newcastle University and at Goldsmiths College, London. Previous exhibitions include: In and Out of Sight, UH Gallery, Hertfordshire; Easy does it Supercollider, Blackpool; Pertaining to Things Natural... Chelsea Physic Garden, London; An Archaeology 176, London; Fade Away And Radiate, Aspex Gallery, Portsmouth; Tatton Park Biennial, Give and Take at Firstsite, Colchester, You Shall Know Our Velocity at BALTIC, Gateshead. She lives and works in Gateshead, UK.