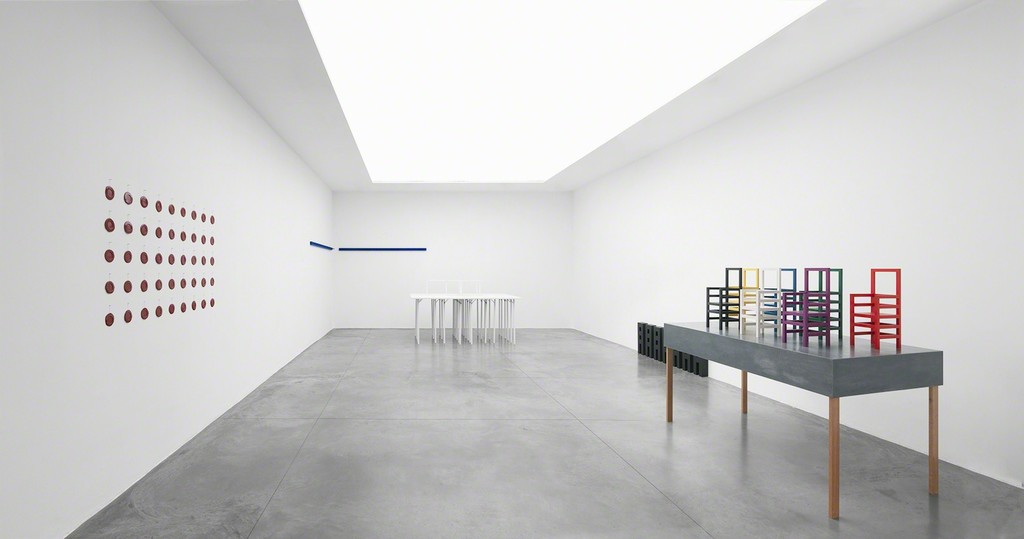 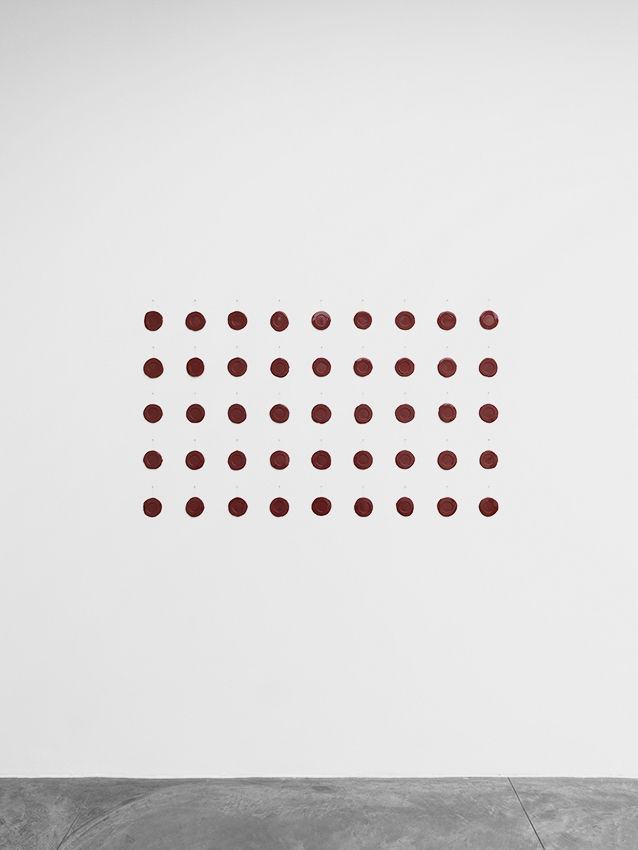 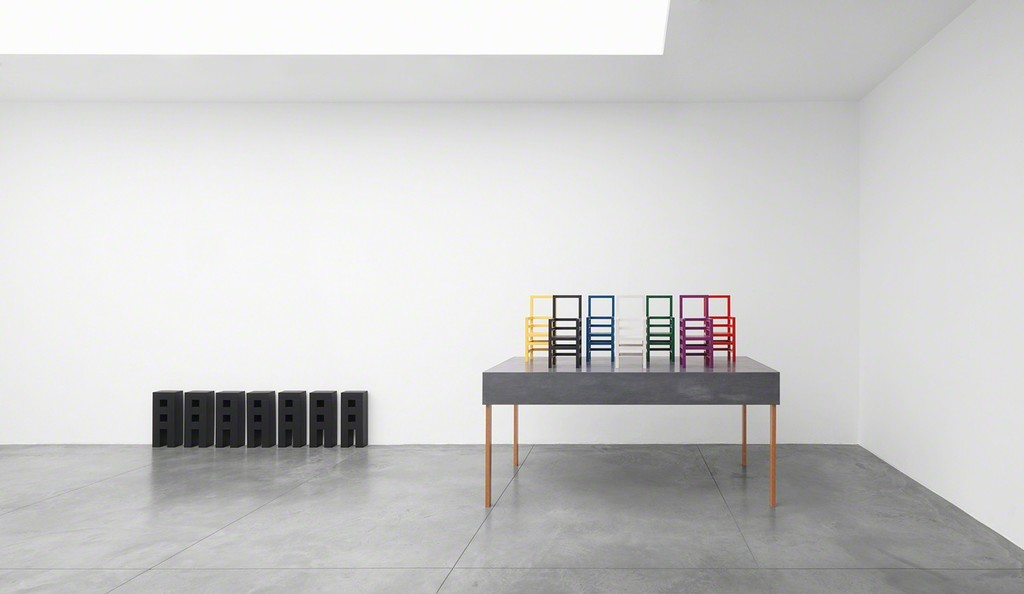 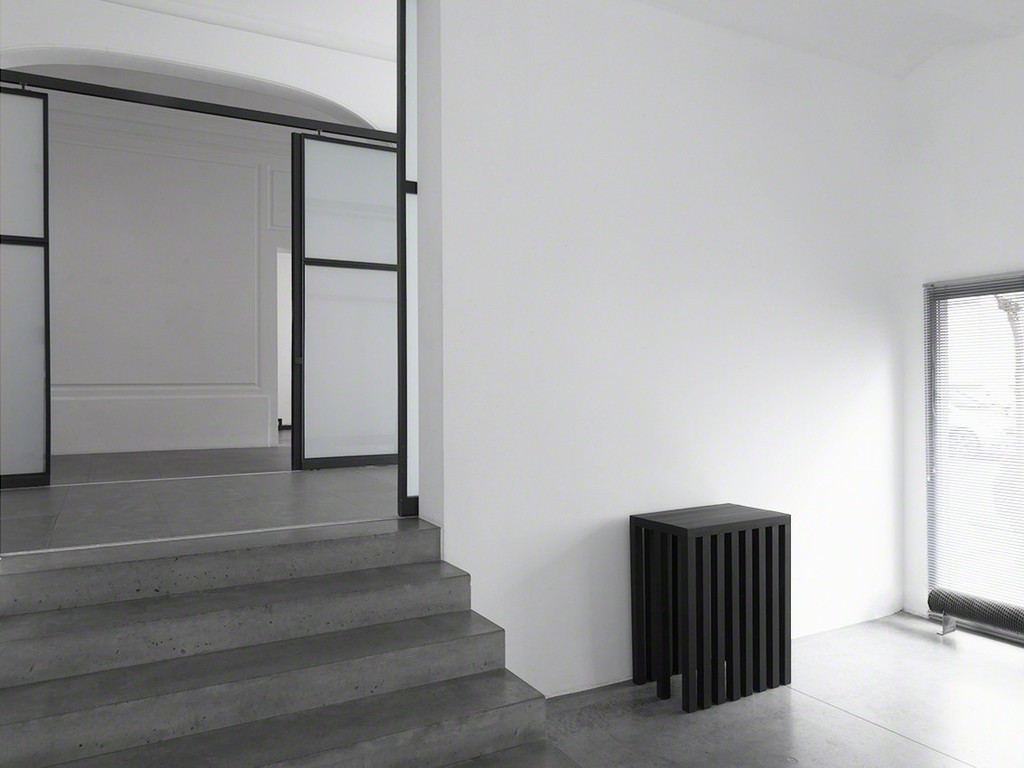 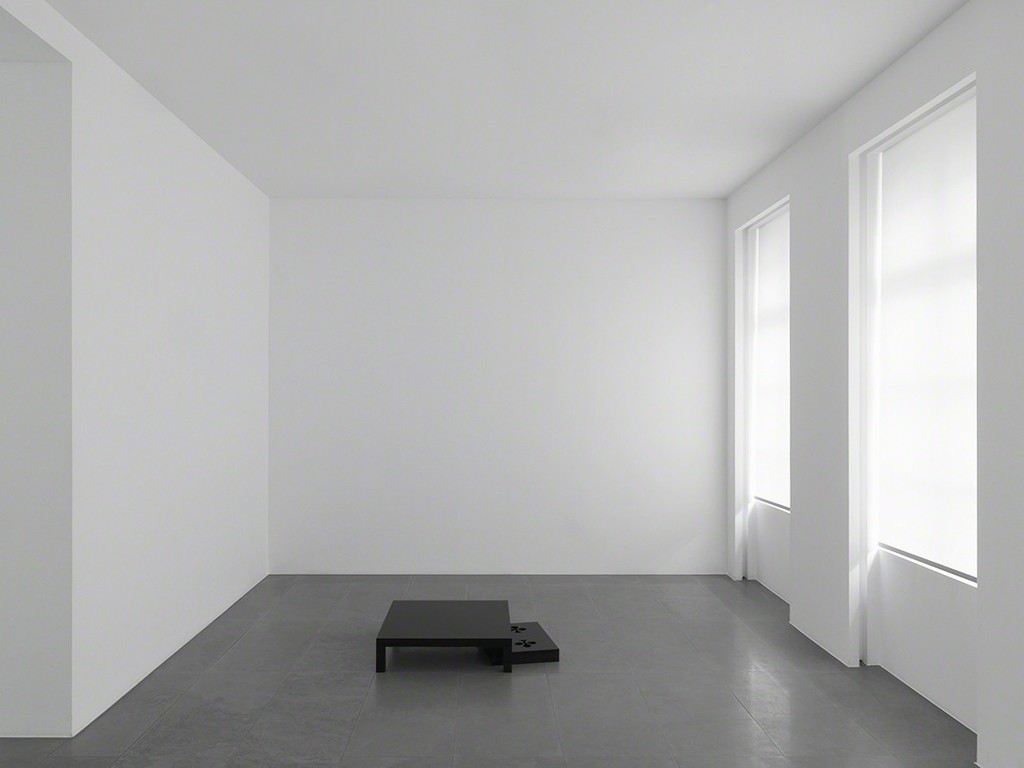 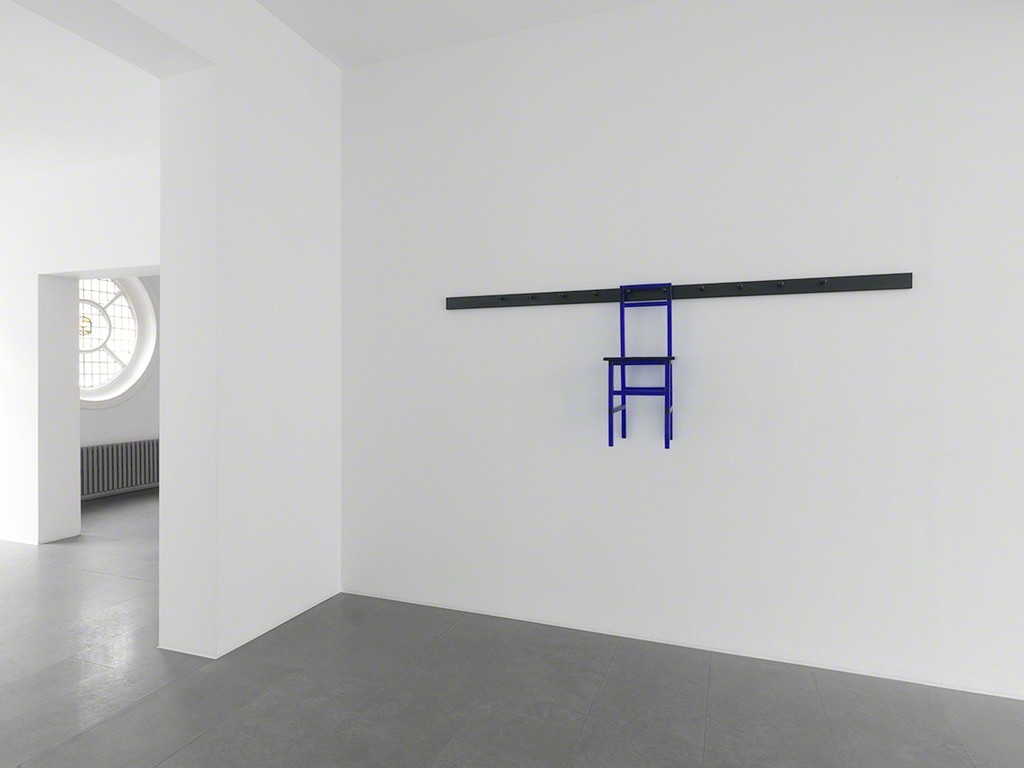 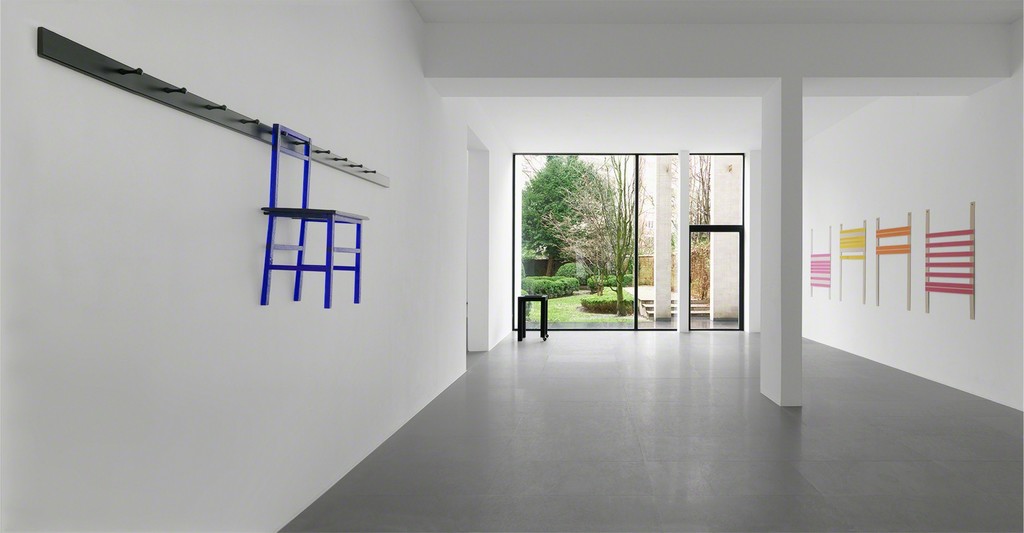 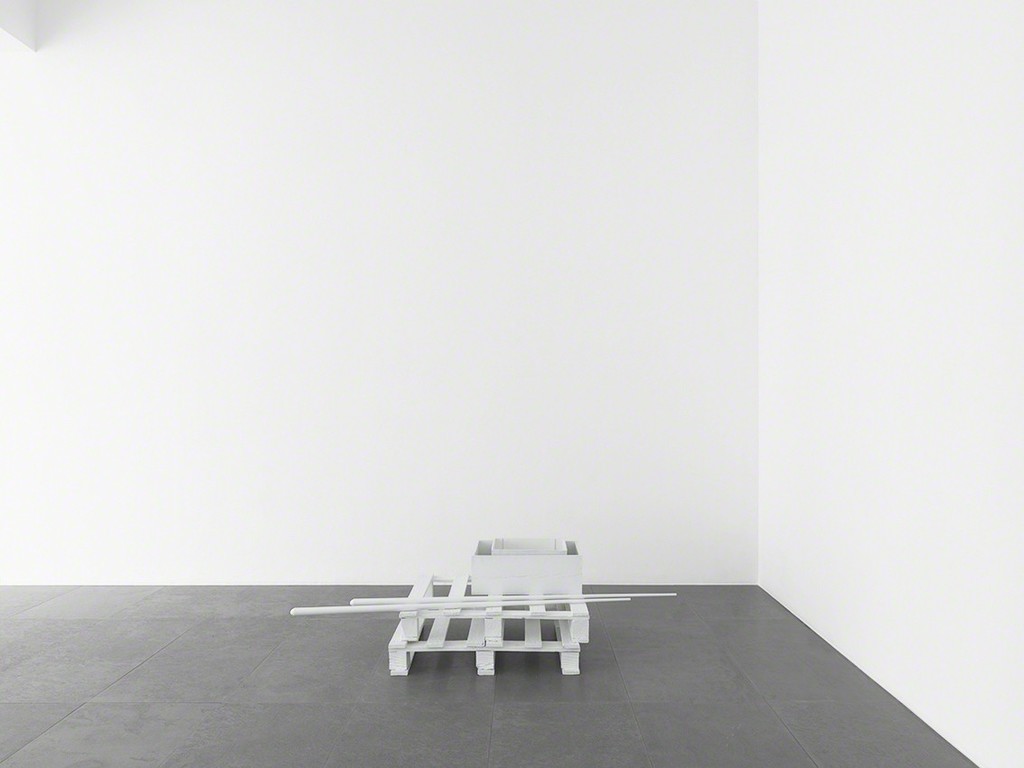 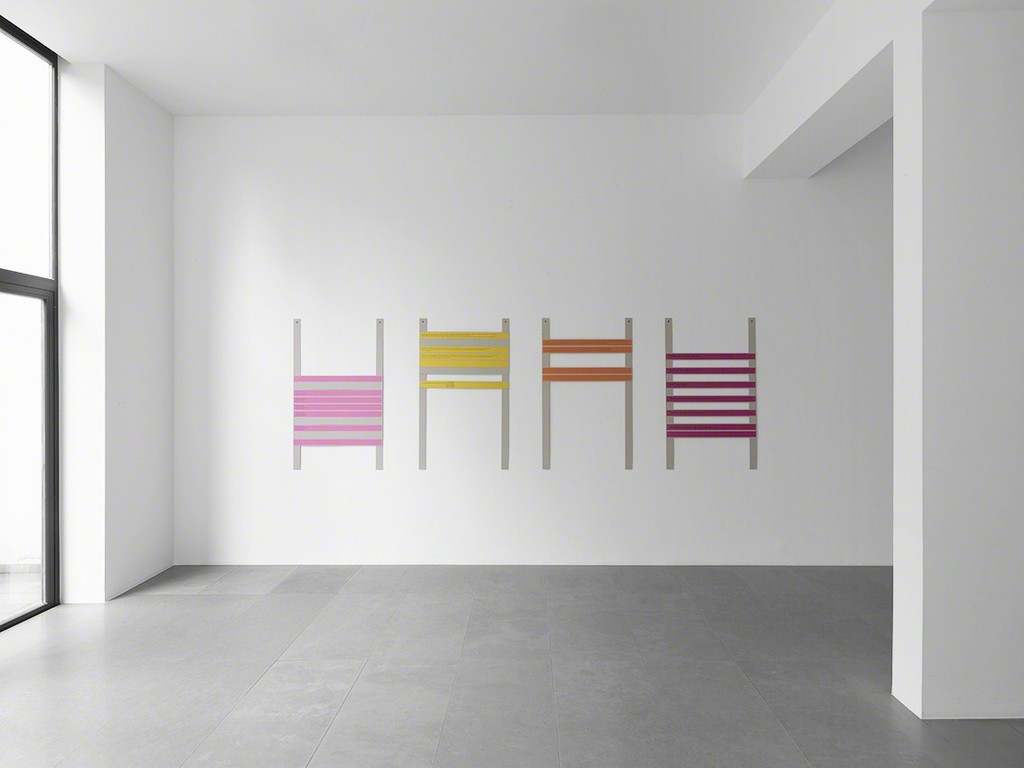 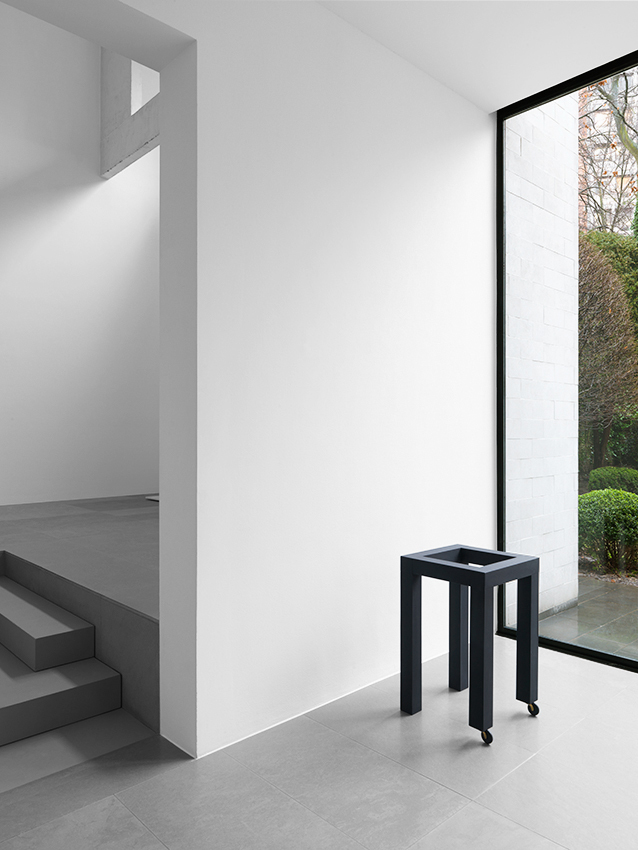 Exhibited alongside a selection of works made over the last twenty years, the title of the work and exhibition is a reference to Lionel Hampton’s jazz song Charlie Was a Sailor. Recorded in 1940, the lyrics recount the romantic adventures of the eponymous Charlie, a Lothario with a ‘woman in every port’ who ends up – quite literally – in hot water. Having clarified this initial springboard, we can immediately disregard it inasmuch as the artist is not interested in the song per se, but in the structure of the music and the story: the tragi-comic death of a virile man with a lust for life and love. Jan Vercruysse’s Charlie Was a Sailor (2014) takes the form of four parts in grey cardboard with silkscreen printing of words and/or symbols, phrases (both complete and incomplete) and blocks of colour. Each work is put forward without any link to the others, except in terms of technical execution and ‘outline’.
Yet the compositions of lines and empty spaces in Charlie Was a Sailor hark back to the Tombeaux, a series of works created by the artist between 1987 and 1994 (two of which are included in the exhibition). Conceived as ‘places of memory’, or ‘bearers of memory’, the works contain, or contemplate, a ‘void’ – an empty space that can be filled by an imaginary presence. This/these presence(s) find(s) ‘voice’ in the works exhibited, which can be viewed individually or as a ‘constellation’. Charlie Was a Sailor also references and underscores earlier works in the exhibition such as Places (2005), which deals with the notions of absence/presence, loss and memory in combination with the exploration of the meaning of ‘place’ and the possibility of rendering this philosophical concept into a work of art, and Places [Lost] (2010), which explores places of memory that concentrate meanings, events and fragments of experience.
Vercruysse has always worked in series, each of which represents a new quest in search of the place of art and the artist. The most important of these are: Portraits of the Artist (1978-1984), Chambres (1983-1986), Atopies (1985-1987), Tombeaux (1987-1994), the M(M) works (1992-1998), Les Paroles (1993-1998), Les Paroles [Letto] (1998-2001) and, since 2004, Places. The exhibition includes key works from many of these series and reveals, in Charlie Was a Sailor, the most recent manifestation of Vercruysse’s unforgettable visual poetry.
The work of Jan Vercruysse is part of important museum collections such as The Museum of Modern Art (MoMA) in New York, Tate Modern in London and Museum van Hedendaagse Kunst (MuHKA) in Antwerp. Solo exhibitions include the Museum of Modern Art in Paris (1986), Kunsthalle in Bern (1989), Van Abbemuseum in Eindhoven (1990, 1997), the Belgian pavilion at the Venice Biennale (1993), the Haus Lange und Haus Esters in Krefeld (1995) and a major retrospective Museum M in Leuven (2009). Recently, the work And Then There Were None, which precedes Charlie Was a Sailor, was exhibited at Tucci Russo Studio per l’Arte Contemporanea in Turin (2013).